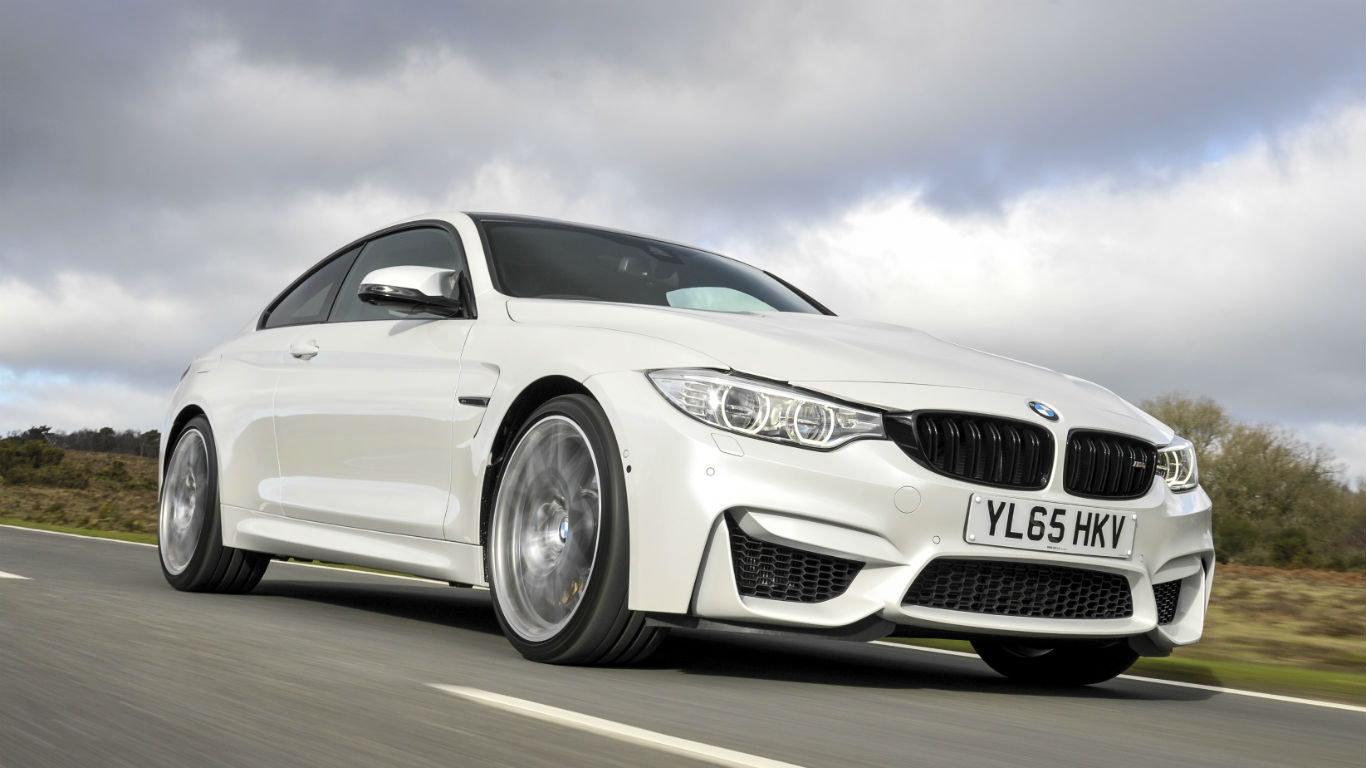 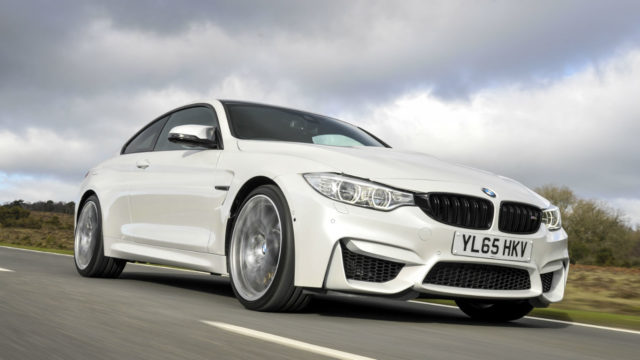 Harder, better, faster and, er, more expensive, the Competition Pack cranks the BMW M4 up to 11. For an extra £3,000, the M4 coupe – and its M3 saloon sibling – gain 19 hp, adaptive suspension, sports seats, stylish 20-inch alloy wheels and a fruitier exhaust. Are the upgrades worth it, or is BMW simply gilding the lily? 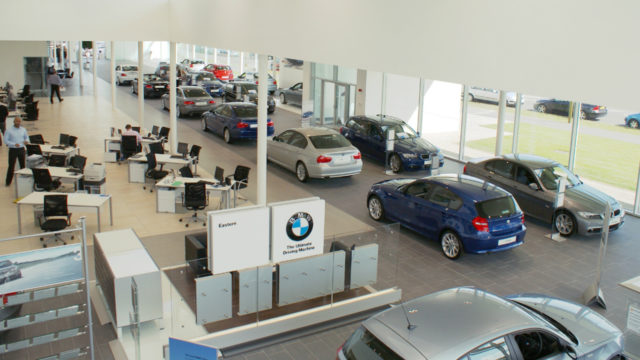 At the time of writing, the M4 Competition Pack costs £60,065, or £62,560 with the DCT semi-automatic gearbox as tested. That’s about £500 more than an equivalent M3, or £3,000 less than the M4 convertible. However, we found discounts of nearly £10,000 on M4 DCTs via ‘reverse auction’ website, AutoeBid – so expect similar savings on Competition Pack cars. 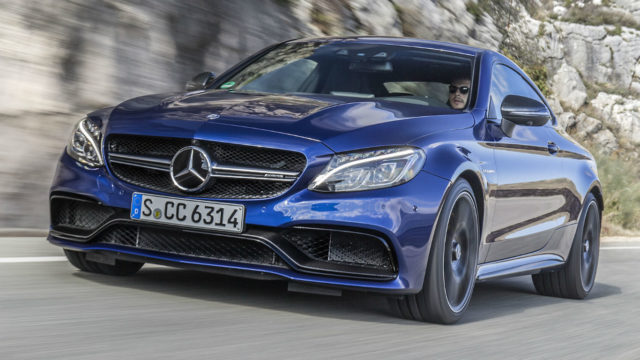 Until the new Audi RS5 arrives, the M4 has one major rival: the Mercedes-AMG C63 coupe. With 476 hp from its 4.0-litre V8 (or 510 hp in full-fat ‘S’ spec), the muscle-Merc trumps the M4 for outright power – and has a better soundtrack. However, the BMW is a more satisfying steer on a twisty road. You could also consider the Lexus RC F and Porsche 911 Carrera. 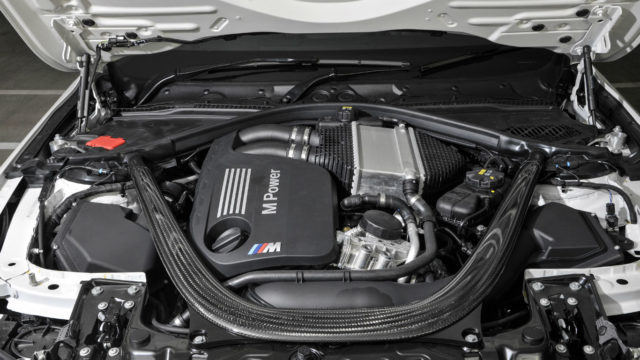 The BMW can’t match the C63 for cubic inches, but its 3.0-litre twin-turbo straight six develops a stonking 150 hp per litre. For those who struggle with maths, that’s a grand total of 450 hp – up 19hp on the standard M4. Maximum power arrives at a heady 7,000 rpm, meaning you need to rev this engine hard to get the best from it. Note the carbon fibre strut brace to stiffen the chassis. 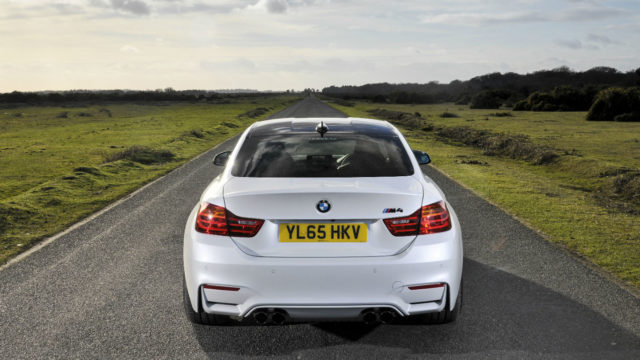 You want figures? How about 0-62 mph in 4.0 seconds for the DCT version? Choose a manual gearbox and you’ll lag 0.1 seconds behind at the lights. Which serves you right for trying to save money, frankly. Either way, the M4 Competition Pack is 0.1 seconds quicker off the line than the standard car. Top speed is limited to 155mph. 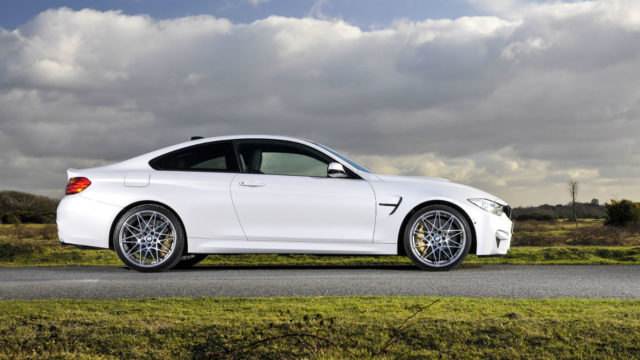 Those 20-inch machine-polished alloy wheels look fantastic, but they don’t do ride quality any favours (the regular M4 has 19s). Even in Comfort mode, you feel every ripple in the road surface. That said, the M4 doesn’t thump and bang through potholes like some sports cars. And its race-style seats are supportive and well-padded. Full marks for the M-striped seatbelts, too. 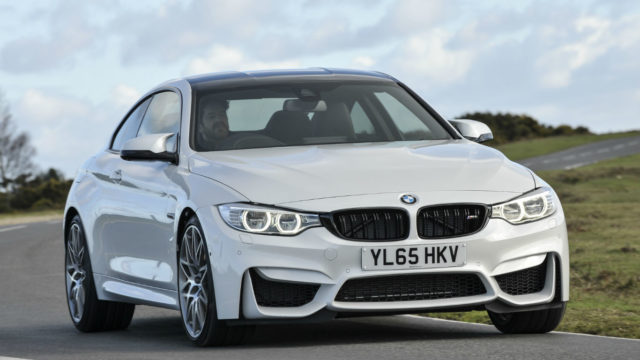 Oh yes. The M4 has faced criticism for being too soft, but the Competition Pack sharpens up its edges. It’s ferociously fast, and the chassis is a textbook example of rear-wheel-drive adjustability. Well-weighted steering and a flawless semi-automatic gearbox complete the package. Compared to the C63 AMG, you work a bit harder to experience the BMW’s ample rewards. But that’s hardly a chore, right? 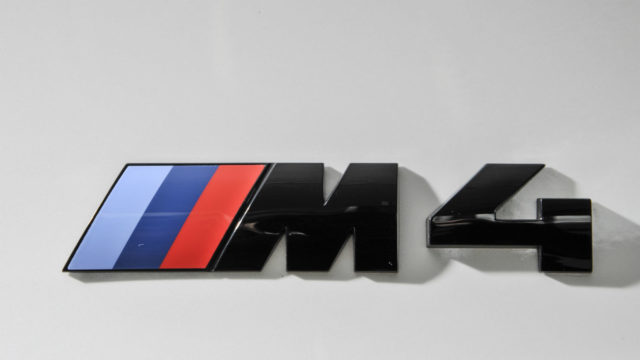 The most efficient non-hybrid BMW 3 Series – the 320d EfficientDynamics auto – returns fuel economy of 74.3mpg. The M4 manages less than half that, with official figures of 32.1mpg for the manual and 34.0mpg for the DCT. CO2 emissions of 194g/km mean you’ll pay £500 car tax in the first year and £270 per year thereafter. 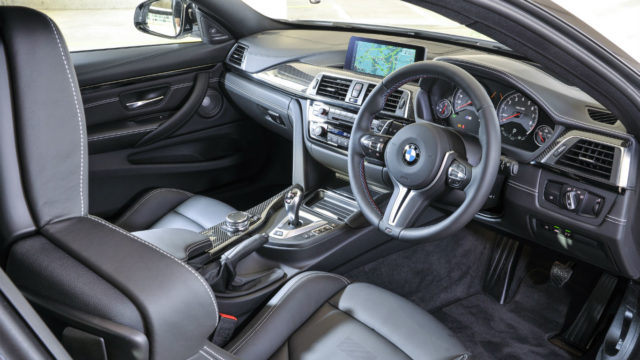 The interior of the 4 Series dates back to 2012. Compared with the latest Audi A4/A5 and Mercedes-Benz C-Class, the plastics seem a little cheap and the design a little dated. We can’t fault the ergonomics, though. Traditional BMW white-on-black dials and a centre console angled towards the driver were supplemented by an £825 head-up display in our test car. There’s also the excellent iDrive media system, which we’ll come to in a minute… 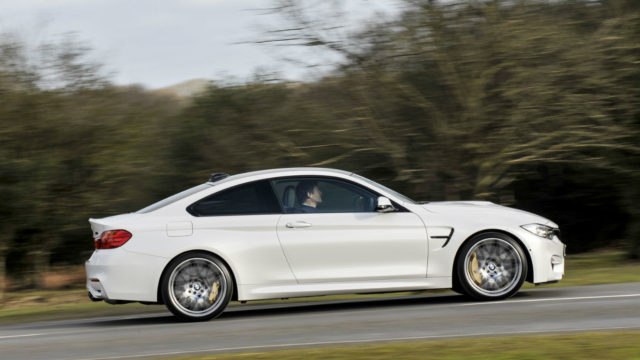 For anyone who’s ever squeezed into the back of a Porsche 911, the M4’s two proper, adult-sized rear seats will be a revelation. It’s a little dark back there, and access is awkward behind the bulky sports seats. But if you regularly carry passengers, you could always buy the M3 saloon instead. The M4 also has a decent 445-litre boot – about the same as a Nissan Qashqai. 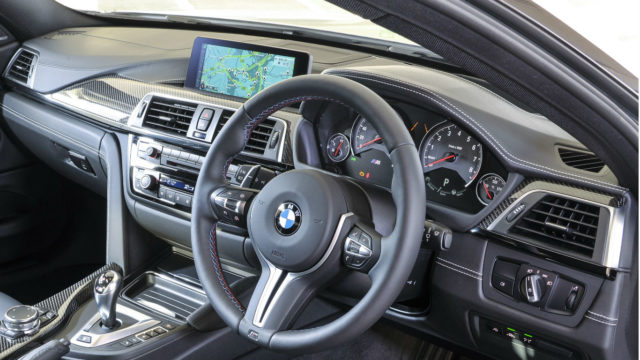 We rate BMW’s iDrive media system as the joint-best available, along with Audi’s MMI. Its widescreen display is mounted high on the dashboard, and the ‘clickwheel’ controller is easy to operate without taking your eyes off the road. It’s far superior to Mercedes’ Comand, and we prefer it to the various touchscreen systems available, too. Standard kit includes Bluetooth phone connectivity, DAB radio and in-car wi-fi. We’d also be tempted to splash out £675 on the premium Harmon Kardon hi-fi. 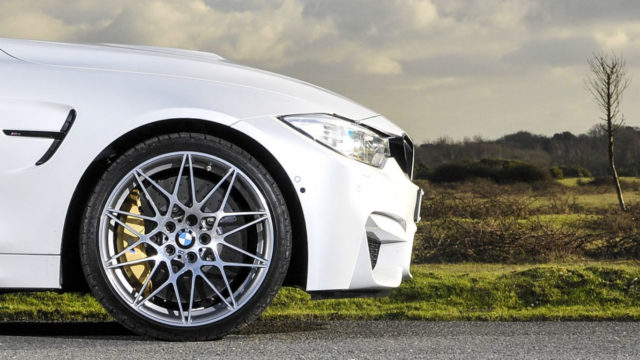 The closely-related BMW 3 Series scored a full five stars in Euro NCAP crash tests, and there’s no reason to think the M4 would be any different. All cars come with side and curtain airbags and advanced stability/traction control. Even so, with 450 horses on tap, the biggest threat to your safety (and driving licence) will be your right foot… 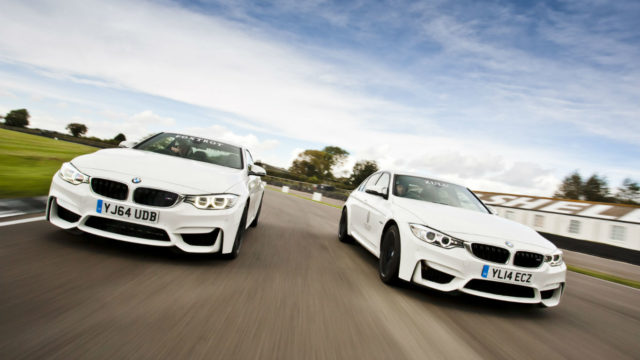 The obvious question here is: should you go for the Competition Pack? We certainly would, and BMW expects 70% of buyers to follow suit. With improvements to performance, handling, noise and appearance, the Competition Pack simply makes for a better M4. And its £3,000 additional cost looks modest in the context of a £60,000 car. The only downside is the firmer ride, but we think that’s a fair trade-off for improved agility. 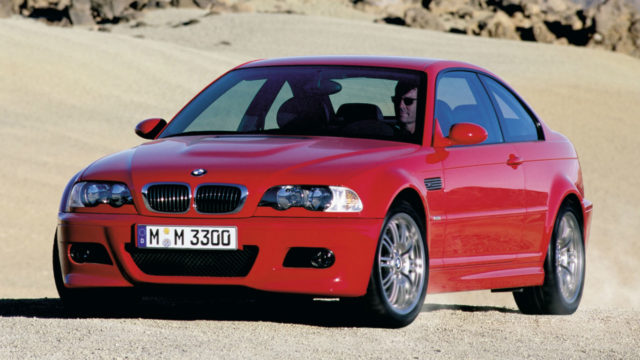 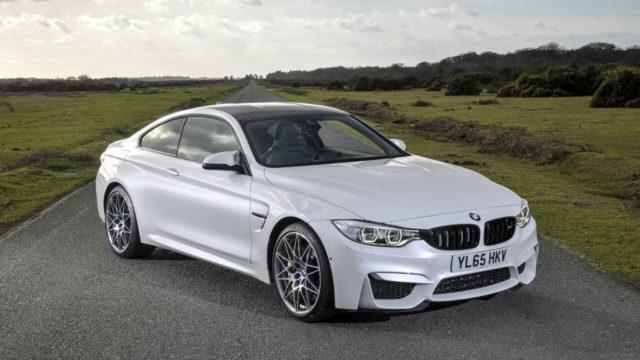 Cards on the table, we prefer the titanic torque and aural drama of the Mercedes-AMG C63 to the subtler charms of the M4 Competition Pack. The BMW would best for a track day, but the more exciting Mercedes has the edge on the road. There’s also a BMW M2-shaped elephant in the room. Smaller, cheaper and more fun, the new M2 is our current favourite M car. 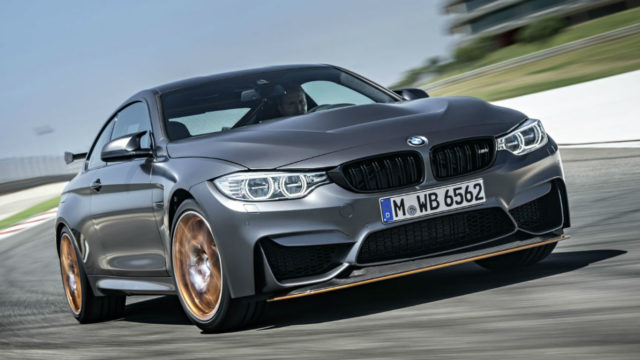 Even the Competition Pack enhancements don’t make this the hottest M4. That honour goes to the M4 GTS: a lightweight, 500 hp rival for the Porsche 911 GT3. With two seats, a front splitter that doesn’t do speed humps and a price tag of, ahem, £122,000, the GTS gives two fingers to everyday usability in favour of track-focused performance. One for the lottery-win garage, perhaps?