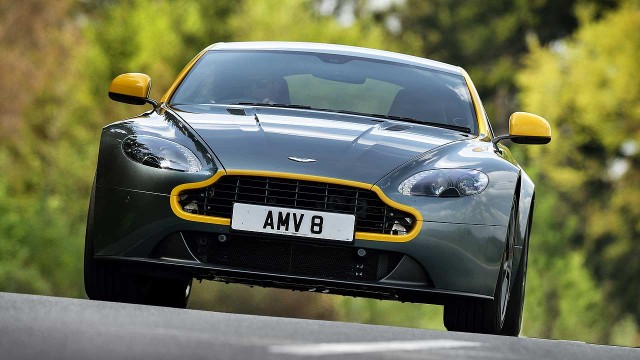 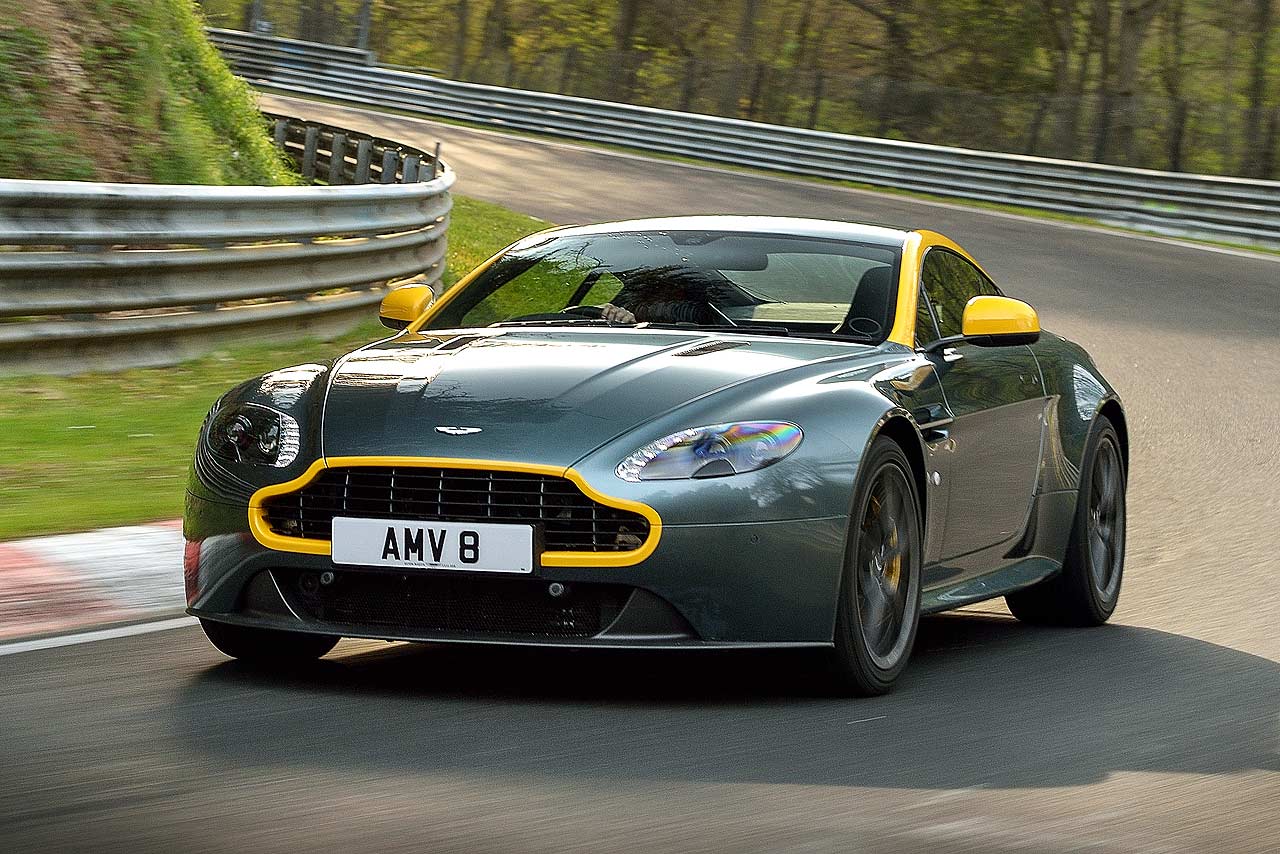 Aston Martin builds a V8 Vantage Club Sport; it drives as well as it looks, prices from £89,995 are good value, but age is catching up

Aston Martin has, thanks to former CEO and now non-exec chairman Dr. Ulrich Bez, real motorsport currency. It vies with Audi, BMW, Mercedes and Porsche in challenging for GT racing honours, and runs both AMR official and customer GTE, GT3 and GT4 cars in many high profile races, including Le Mans and the Nurburgring 24 Hours.

It’s the firm’s links to the Nurburgring that it’s decided will be ideal to give the V8 Vantage range a lift. On sale since 2005, Aston’s smallest car has become the Porsche 911 and Audi R8 alternative everyone forgets; a pity, given how well it still drives and, following price realignments a few years back, what decent value it offers.

Enter a new Nurburgring-toned special edition, then: the Vantage N430. Another of Aston’s ‘N’ cars, it’s not limited in number and if customers like it enough, it could become a staple of the model range. Certainly it has the top line deal to compel: V8 Vantage S suspension and engine, lightweight wheels and seats, standout colours and graphics, £89,995 list price. Astons aren’t bargains, but in terms of value, this one is superb.

For many (including lots of motorsport fans but non-Aston owners), it’s the colour combinations that make this car appealing. Designed to ape Aston’s GT4 racers (which have won the N24 SP10 class twice in the past four years), there are five: green with yellow, blue with red, black with silver, silver with white, white with red. They’re not stickers either, but fully painted accents – a job that takes hours of skilled effort – and all look impossibly rich in the metal. Called club sports packs, they’re actually standard in the UK, and this really does make the V8 Vantage a bargain.

Basically, it’s a V8 S in (very pretty) drag, that costs a bit more than a Porsche 911 Carrera S, a bit less than a base Audi R8 V8. Is it enough to put the V8 Vantage back on buyers’ radars – and help them overlook the basic age and familiarity of the car? On the eve of the 2014 Nurburgring 24 Hour race, we found out.

A Porsche 911 991 feels dulled down; it takes time for its real ‘feel’ to emerge. An Aston Martin Vantage N430 feels anything but; time here is needed to bond with its alacrity and occasional raw raciness, and realise what a well honed driver’s car it is.

Steering feel is first rate (and better than a Porsche). The meaty helm has positivity, intuitiveness and the wonderful feel-good centre-squrim that telegraphs surface irregularities so well to enthusiasts. The lithe nose is extremely keen to respond, and it feels too much, too nervy at first, until you ‘get’ the fact this is good old fashioned steering feel and appeal, with not a trace of EPAS muddiness or discontinuity.

It boasts well-judged suspension too (taken straight from the V8 S), which is firm but not aggressive and exceedingly well damped at speed. The fluidity it shows over undulations oozes class and it’s only in town where it gets jittery – blame the tyres’ profile transmitting stiffness through the aluminium chassis.

And how it flows over challenging roads. Key into its responsiveness, its adjustability and purity – which can take many miles if you’re used to the slight dulling from other cars – and you’ll find it a very rewarding, satisfying driver’s car. It demands effort and thought from you, but it’s worth thinking about the drive because it pays you back richly.

The engine has lots of cammy character; the valvetrain noise you hear windows-down in town is delicious, it howls rather than bellows and the blaring sports exhaust has a politeness something like a snorting, spitting AMG doesn’t.

But it’s only effective if you rev it. There’s a sore lack of pull below 3500rpm and, while the way it picks up and drives to beyond 7300rpm with vigour is exciting, sometimes it’s too much like hard work. 2014 Drivers are used to easy turbo torque; the Aston will feel ‘slow’ to them. 4.8 seconds to 62mph shows it isn’t, but just 361lb ft at 5000rpm doesn’t make it easy.

Sportshift II seven-speed AMT would make it easier because while the six-speed manual is snappy and positive, it’s also unforgiving if you’re lazy. Don’t shift gear with skill and it won’t reward you. The clutch and transaxle are very chundery at low speed too, and pulling off feels clumsy; it’s easy to stall and not very fluent. Cures that right-mounted fly-off handbrake too!

Supercar manufacturers don’t rush new cars. The R8 is only a year younger than the V8 Vantage; the 911 is only new thanks to model cycles: the former one dated back to 1998. Why do we grumble about the age of the Aston, then, when it’s simply in line with what its rivals do?

Because age is withering it in obvious areas. Namely, the interior. Yes, it’s beautifully finished – Aston Martin’s craftsmanship is among the best you can get in this sector – but the hardware it’s forced to use is very dated. A mass of buttons, tiny cloudy displays, sat nav that requires deep patience, optional Bluetooth – it’s like going back to the pre-smartphone era.

The engine also shows its age in key areas. CO2 is high, fuel economy low, torque low down lacking. It possesses the good sides of those analogue, mechanical sensations development boss Ian Minards promises, but the downsides of something not quite in tune with contemporary expectations of power delivery and engine efficiency.

The shape is familiar too, looking too much like many other Aston Martins since 2003 for comfort – but we’ve long know that, Aston Martin knows that, and besides, the deeply cool club sports graphics mean it doesn’t really matter because they all look so good regardless.

But can it still cut it? Goodness, yes. All the more so now the 911 has gone EPAS and gained in ability but lost in sensuousness. The Aston has old-school feel and, in this sector, that’s fantastic. It is built like a racing car and the engineering that’s gone into it – aluminium architecture, rear transaxle, carbon fibre driveshaft, well-judged LSD – makes it feel bespoke. Aston turned these basic underpinnings into the £1 million One-77, remember.

Like an air-cooled 911, it’s been honed over the years so, while it may not seem the most modern car around, the product itself is extremely well sorted and possessing plentiful ability. And this N430 could thus be Aston’s equivalent of the 1987 911 Club Sport; value pricing, subtle but targeted engineering changes and the trialing of a development direction that could influence the creation of the next one. The ideal V8 Vantage model.

Even if that model does have a dated interior, offset-right pedals, clumsy manual transmission at slow speed, fiddly header controls and auxiliary buttons you’ll accidentally hit almost every time you select first gear…

We really like the Aston Martin Vantage N430. We can’t award it five stars because of the compromises it shows in age-related interior issues, the holes in engine performance and the out of favour efficiency. But we award it four stars without hesitation because of the excellence it shows in so many other areas, and for the overall value it offers.

It’s now a car that has a clear sporting image and purist sporting ability that backs it up. Older V8 Vantages were not-quite-there cars but this one, after years of evolution, is there. Porsche 911 buyers after something more specialist and a bit less grown up than their own car may now look to it; not everyone will put up with the compromises but we feel sure it will still win fans. It deserves to.

The Jaguar is a surprise new British rival to the baby Aston: 550hp for £85k makes it a bargain – a mightily able one at that. The Audi R8 is, like the Aston, ageing but is priced similarly, has the same power and its own growing profile in motorsport. Porsche’s 911 Carrera S is of course an alternative – never discount a car as superb as this – and, for once, looks an £85k bargain alongside the Aston. Want to spend big? Well, splash out on the big, burbling Mercedes-Benz SL 63 AMG.