This is the hot version of Fiat’s MX-5. Confused? Read on...

Not heard of Abarth? You can be forgiven. It’s Fiat’s performance arm – originally a third-party specialist tuner, but bought by Fiat many years ago and resurrected in 2007. So far, it’s concentrated on churning out bonkers versions of Fiat’s 500 city car, but now its engineers finally have something a bit more substantial to work with – the rear-wheel-drive 124 Spider.

Obviously, it’s easy to compare it with the regular Fiat 124 Spider and the Mazda MX-5. It’s more powerful and ultimately more focussed than both, although Abarth says it’s also gunning for the more expensive BMW Z4 and Audi TT. 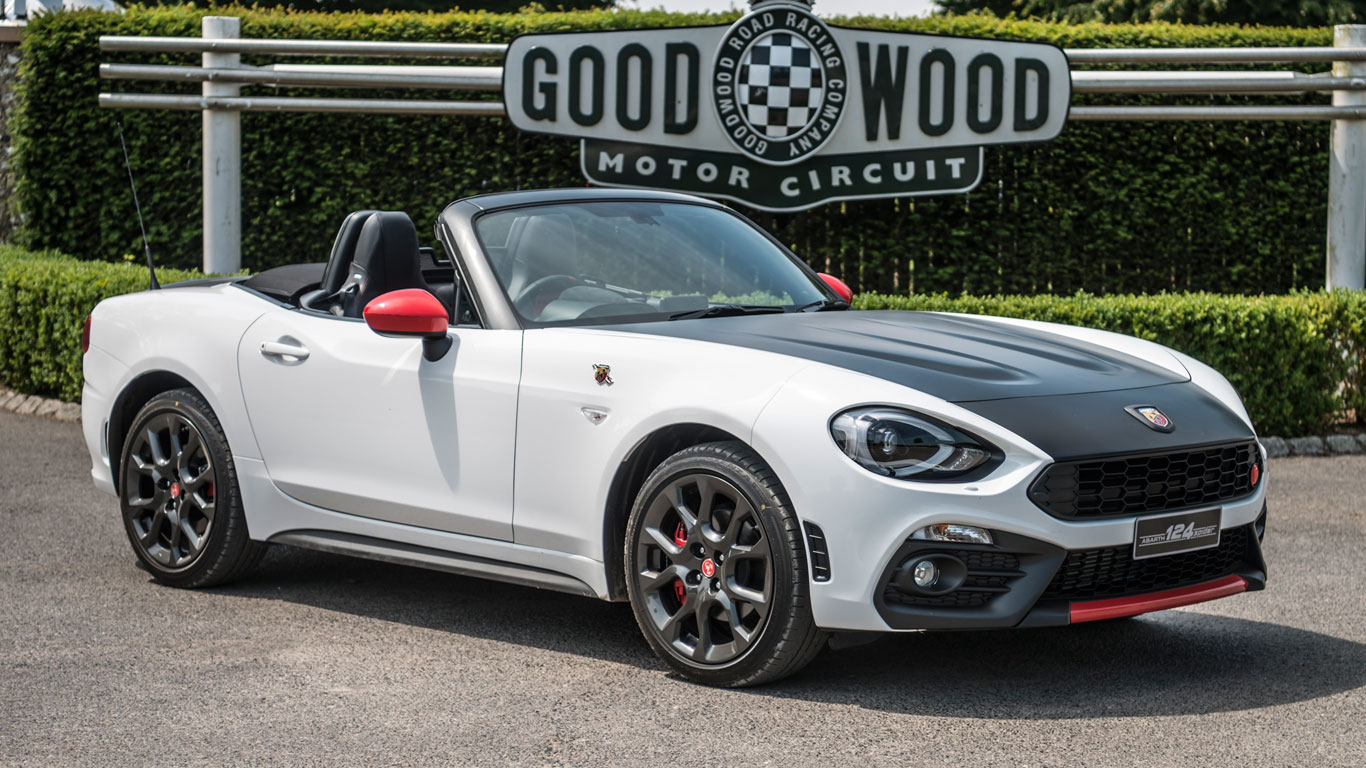 The Abarth 124 Spider uses the regular turbocharged 1.4-litre MultiAir engine, with power boosted from 140hp to 170hp. Torque gets a small boost to 184lb ft.

While the Abarth 124 Spider’s cabin isn’t uncomfortable per se, those of a larger build might find it a bit wearing on longer journeys. If you can fit in, it’s quite a snug place to be. 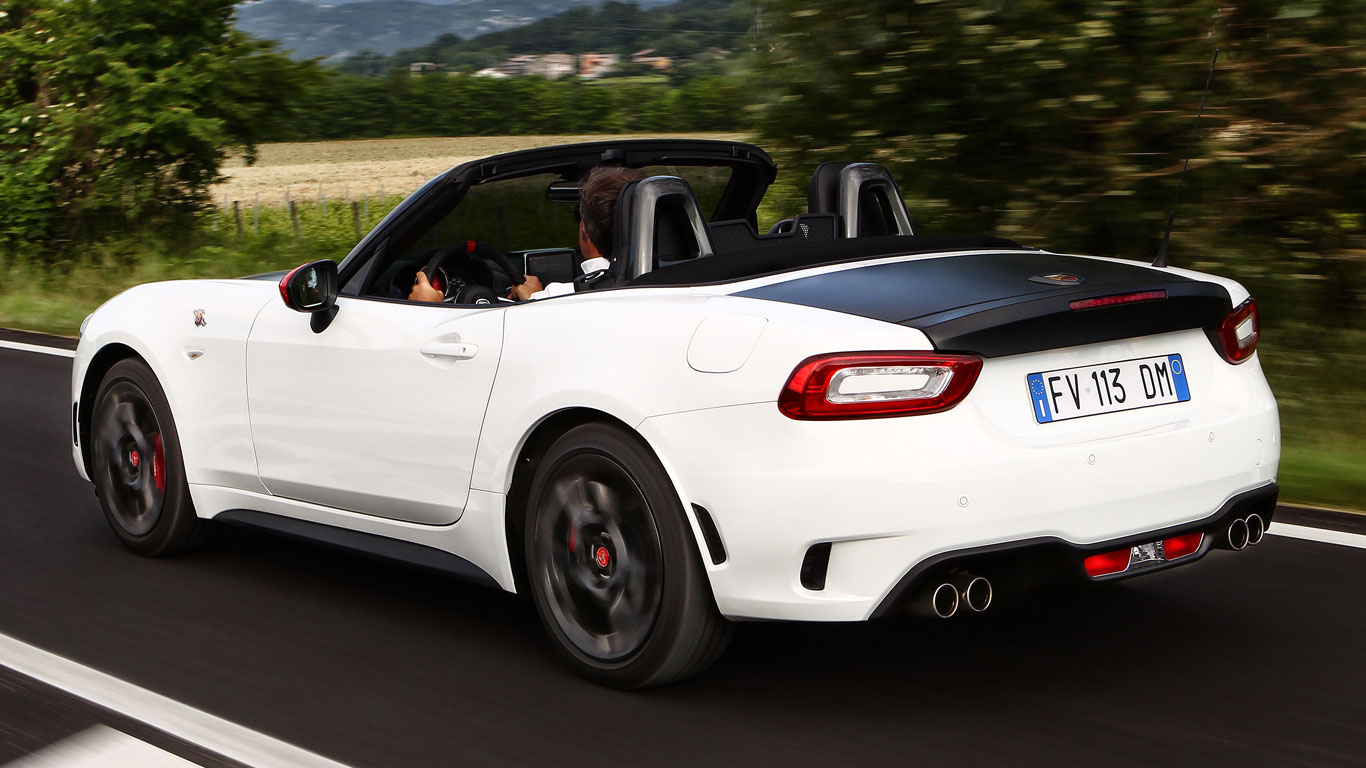 Oh yes. With the same chassis as the Mazda, it’s a wonderfully delicate car to drive – hugely responsive to tiny steering inputs, and massively confidence-inspiring. With a mechanical limited-slip diff, it has no qualms about getting its power down as you exit corners. Even on track at Silverstone, it didn’t feel out of its depth. It sounds better than the standard model, too – thanks to its standard Record Monza exhaust system.

The charm of the regular Fiat 124 Spider and its Japanese cousin is the fun driving experience on offer in exchange for relatively little outlay, in terms of buying and running costs. That’s true with the Abarth version, too. It returns an official combined 44.1mpg – the same as the regular 140hp model.

Abarth has made a few minor tweaks to the 124’s interior to give it that scorpion touch – there’s a smattering of red stitching, as well as ‘racing’ Alcantara and a red rev counter. There’s also a red stripe on the top of the wheel, as well as a metal numbered plaque attached to the bulkhead between the seats. 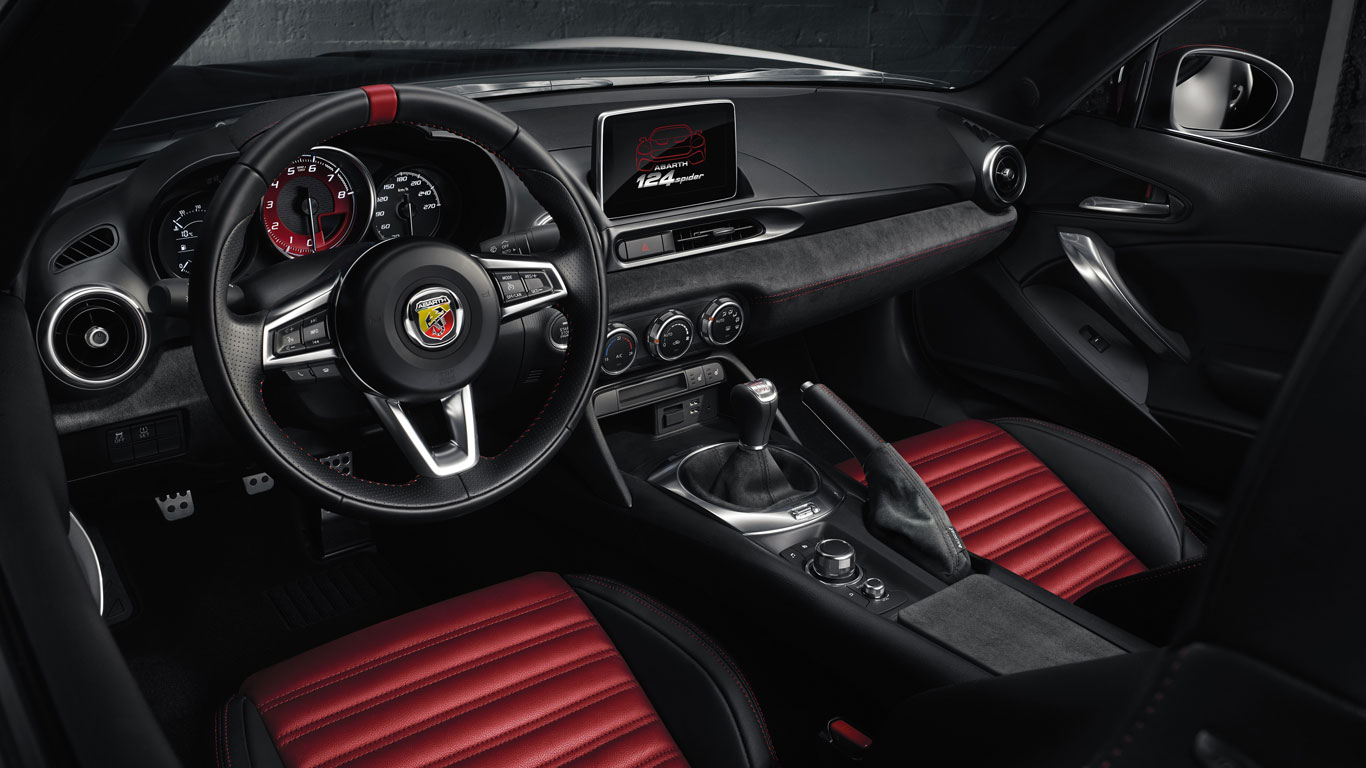 Nope. It’s something we’ve constantly moaned about when reviewing the Mazda MX-5 and regular Fiat 124 Spider. We don’t expect family estate levels of practicality, but is a glove box too much to ask? At least the 140-litre boot will fit a weekend bag or two.

All models come with a seven-inch touchscreen infotainment system (borrowed from the MX-5), as well as a Drive Select button. This sharpens the throttle response, makes the steering even tighter, and provides a bit more give in the traction control.

Although the 124 hasn’t been tested by Euro NCAP yet (in Fiat or Abarth forms), the Mazda MX-5 scored a four-star rating – mainly let down by its lack of collision-avoidance tech. 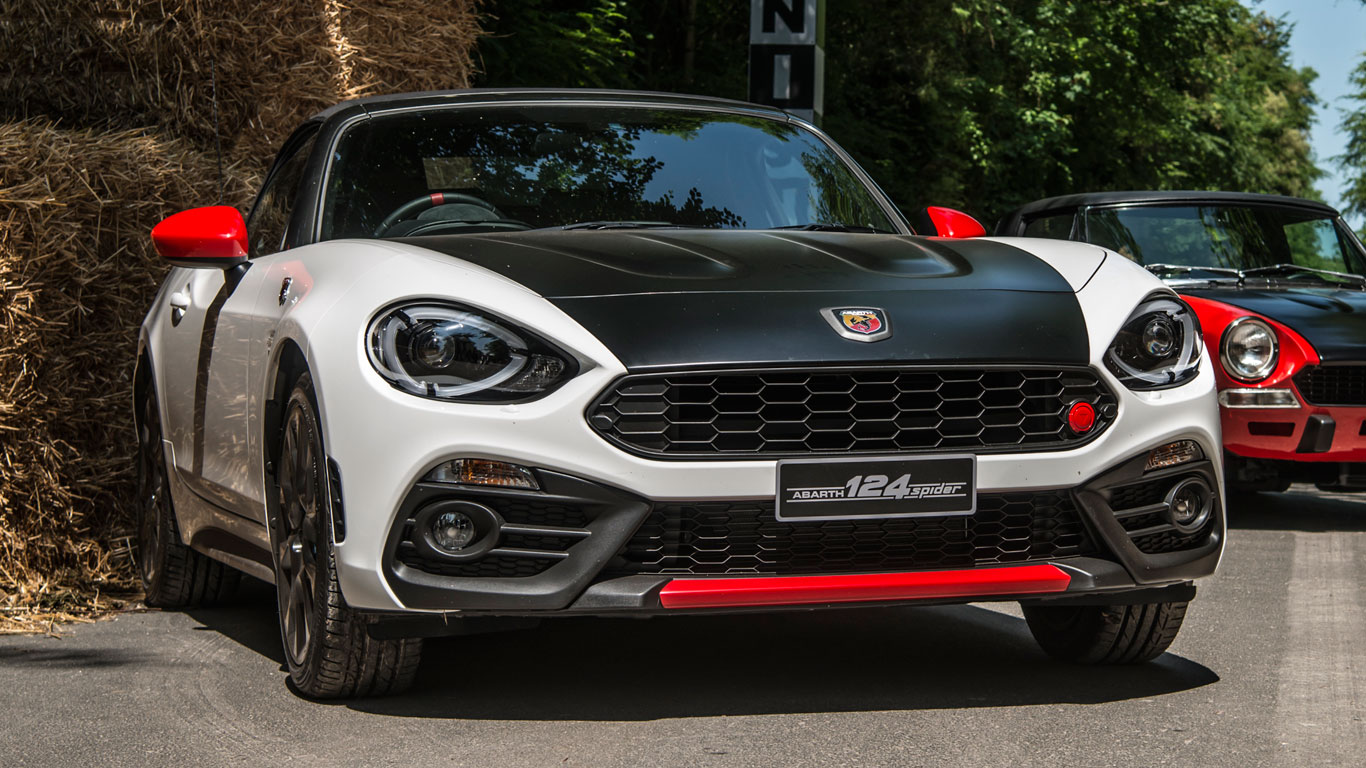 If you’ve decided on an Abarth 124 rather than a regular Fiat 124 or Mazda MX-5, there are many further options. You can choose whether to have the black bonnet or go for a slightly more understated look, and choose between a manual or auto gearbox. We’d go for the former.

There’s nothing really like this on the nearly-new market. We could recommend an MX-5, but the third-generation Mazda wasn’t anywhere near as good as the latest model or its Italian brethren. If Italian convertibles are your thing, look at Fiat Barchettas or Alfa Romeo Spiders.

We’re going to be a little non-committal here… There’s no denying, if you want a real driver’s car, the Abarth 124 Spider is very good. But, at nudging £30,000, it’s getting a lot more expensive than the no-frills entry-level Fiat 124 Spider or Mazda MX-5. And, if you’re prepared to spend the money, you can buy a top-spec MX-5 and take it to specialist tuning company BBR. They’ll do wonderful things to it. 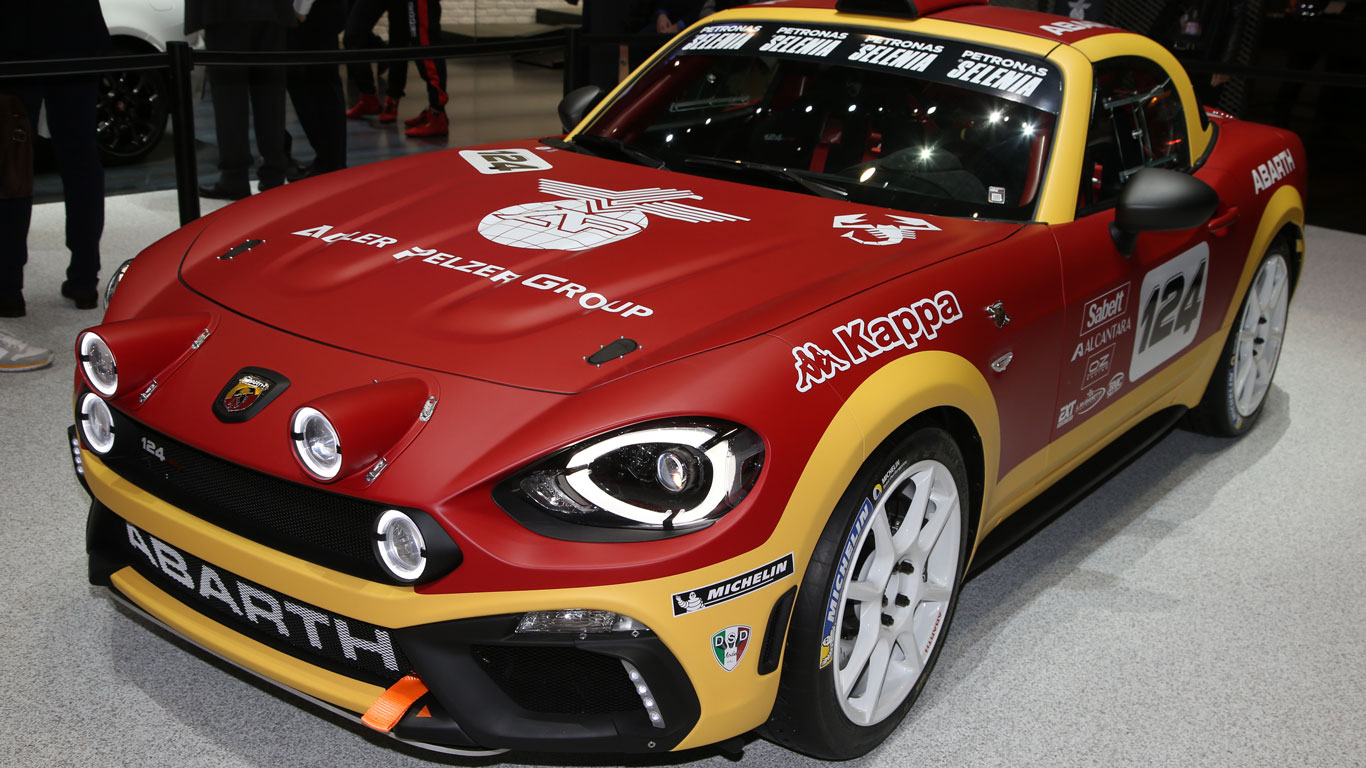 Want to take an Abarth 124 rallying? A motorsport version was shown at this year’s Geneva Motor Show, with the 1.4-litre engine ditched in favour of a 1.8 turbocharged lump mated to a six-speed sequential ’box. It produces a considerable 300hp, but performance figures haven’t been announced.

Live your tangerine dreams with this extreme Porsche 911 GT2 RS

Currently available for sale on Bring a Trailer, this custom-painted GT2 RS has covered only 170 miles since leaving the factory
Read more
Car News

2018’s most and least reliable cars in each sector

The What Car? Reliability Survey reveals the cars you should buy, and the ones you should avoid.
Read more
Car News

There have been more warnings come that a no-deal Brexit could hit the UK car industry hard, to the tune of £4 billion every year.
Read more

Research shows that 46 percent of drivers break the speed limit on a motorway. Here, we outline what you need to know about speeding and the law.
Read more
Advice

The DVSA has guidance for reporting bus, coach and lorry operators and drivers for safety concerns. We explain the process.
Read more
Advice

We explain how to maintain your vehicle's brakes, battery and security during the coronavirus lockdown. It might be worth investing in a trickle charger.
Read more
Advice