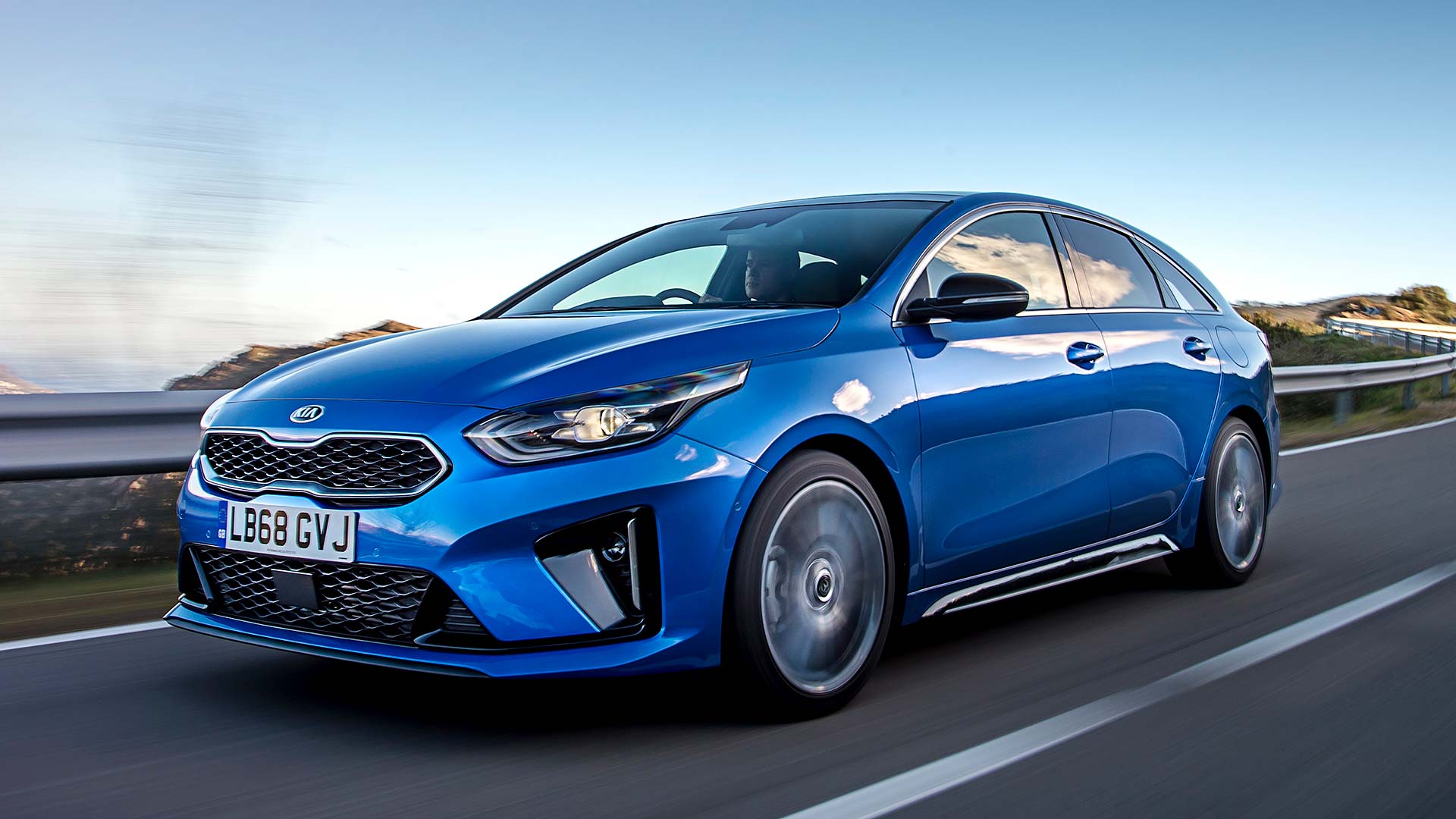 Nobody wants family-sized three-door coupes anymore. That’s why Volkswagen canned the Scirocco for the T-Roc. And it’s now why Kia has ditched the three-door pro_cee’d (sic) for this sleek-looking replacement. Praise be, it even now has a sensible name: Proceed.

You’ll recognise its influences right away: Mercedes-Benz CLS Shooting Brake, Porsche Panamera Sport Turismo. Only instead of costing more than £50,000, you can get one of these for under £24,000. Believe me, as I found on the first drive event in Barcelona, you’ll turn just as many heads. 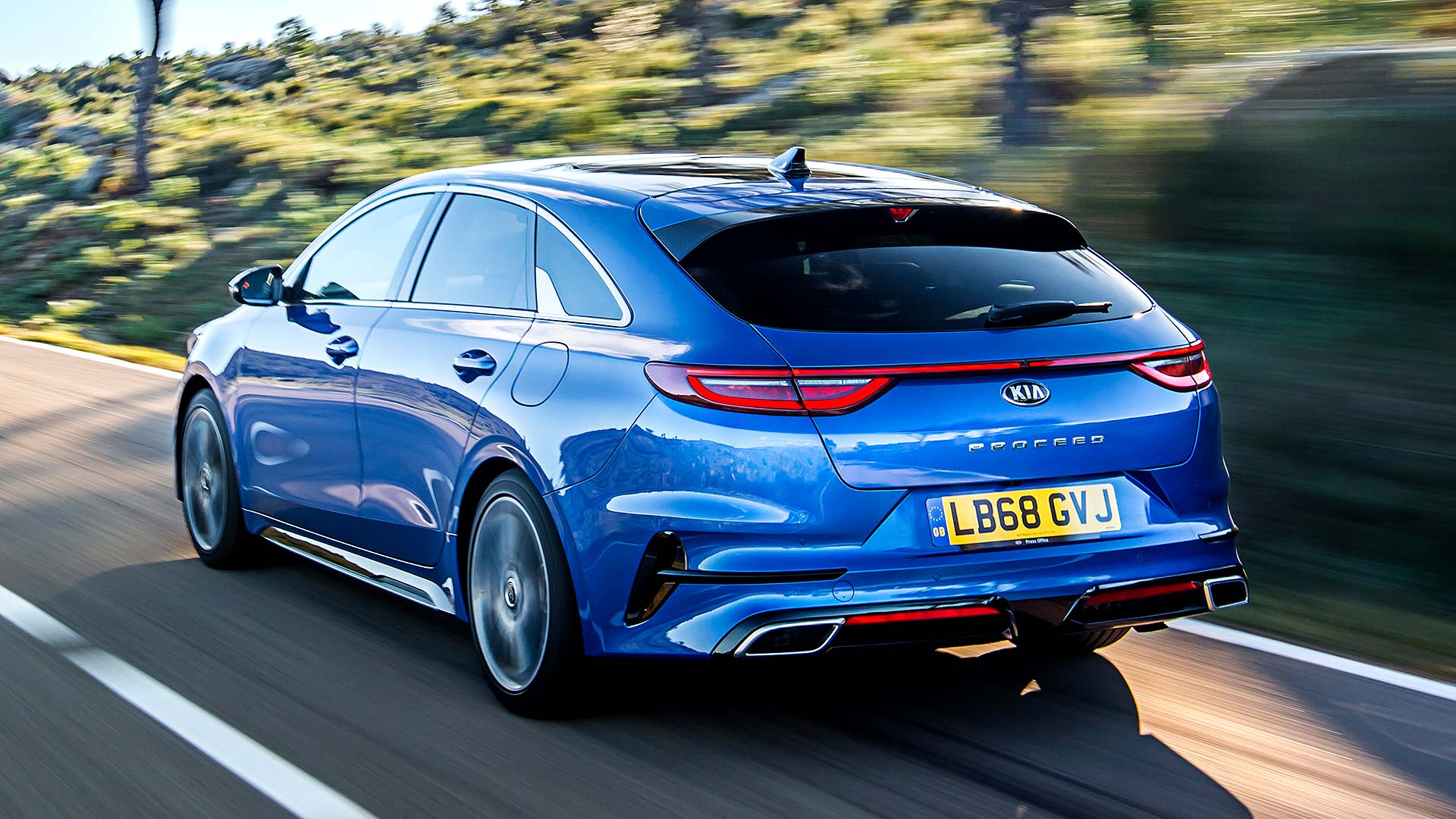 The Proceed sits above the Ceed five-door hatch and Ceed Sportswagon in the range. You could argue Kia now has two estates in this sector, but while the Proceed has a voluminous boot, it’s very much about sleek style over cargo-carrying clout.

It’s going to compete with its Hyundai sister car, the i30 Fastback. That’s more of a hatchback-coupe than a genuine shooting brake, though, while the Proceed genuinely bears comparison with such exalted company. Other rivals: there aren’t many. The Mercedes-Benz CLA Shooting Brake is the most obvious similar-size alternative, but the starting price for that is at least £5,000 more.

Proceed up the range 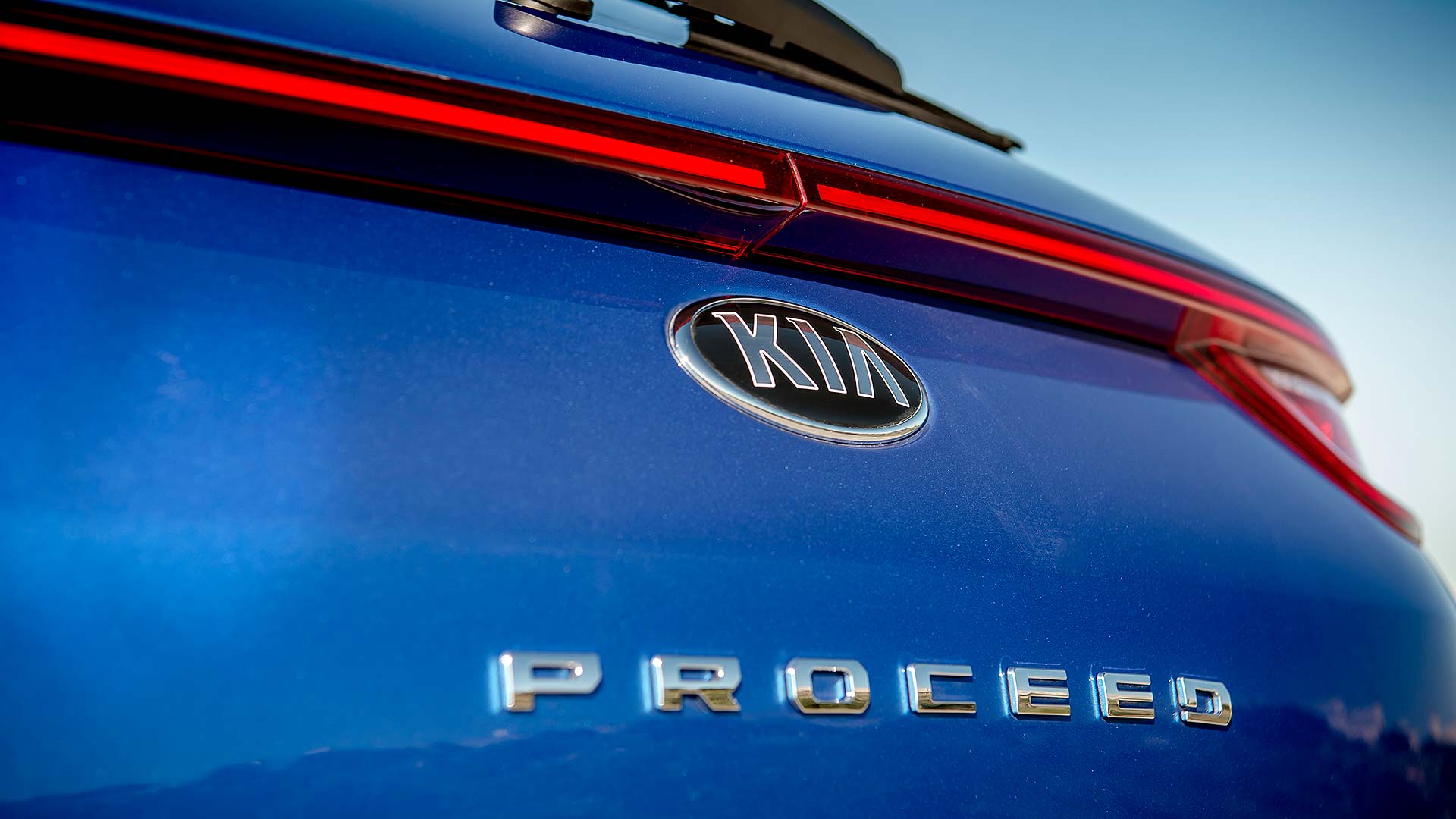 Kia reckons there will be two likely customers: retail buyers looking for a more standout alternative to a family hatchback (but who don’t want an SUV), and company car drivers who need the practicality of an estate but, well, don’t want an estate. Regardless, it will be a niche model: 20 percent of overall Ceed sales.

Porsche will be miffed 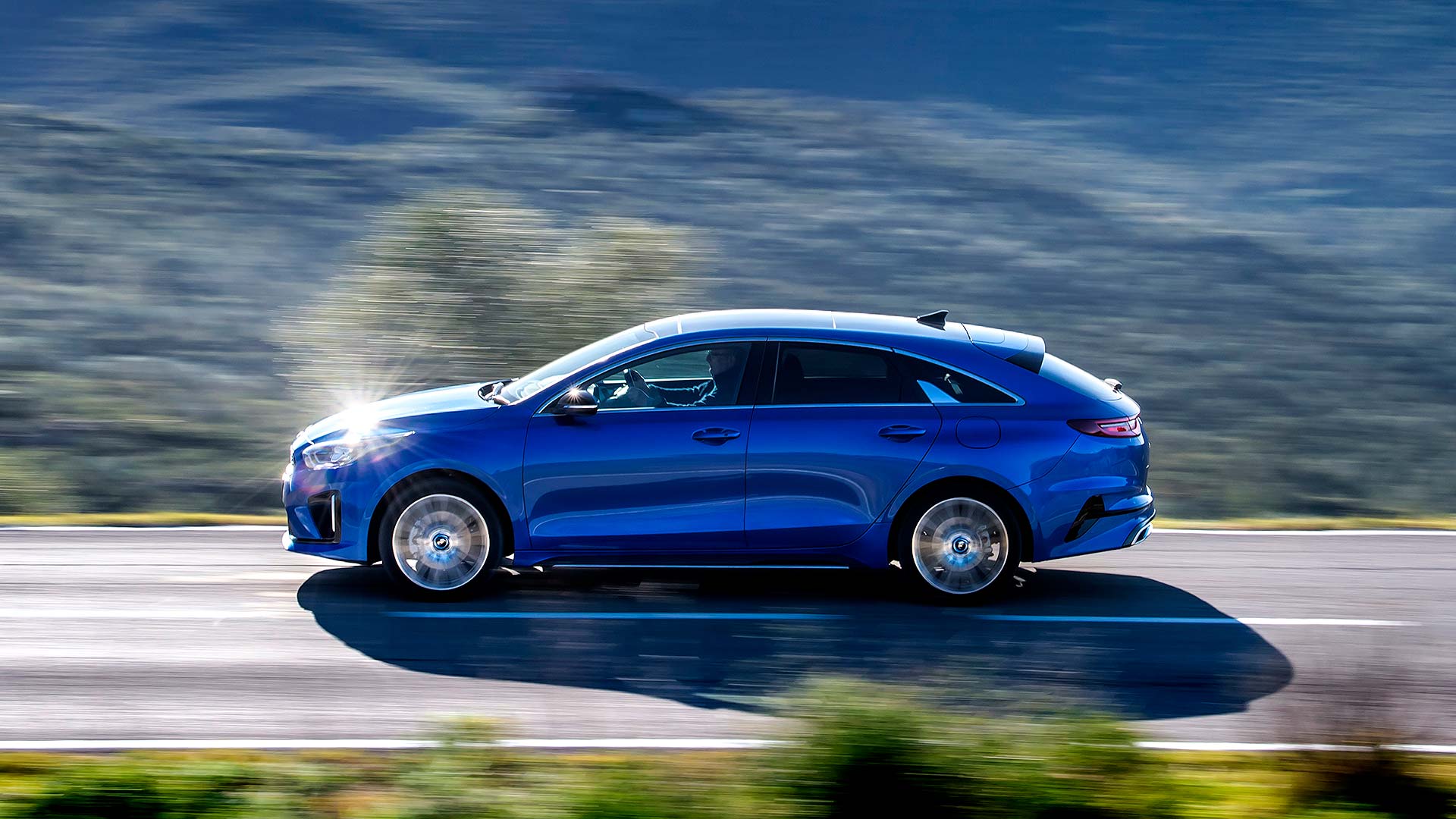 The Proceed’s USP is how it looks: like a compact, better-proportioned Porsche Panamera Sport Turismo. It appears long, low and elegant, but is not too big or heavy, with well-crafted lines and clean, curvaceous surfaces. In blue, with a decent set of alloys, it could pass for a car costing £10,000 more (and from a premium brand, too).

It turned heads for two days while on the Spanish first-drive event. Twitter seemed to love it, too. That you can buy a car that looks this good for less than £25,000 means full marks to Kia. It’s a machine you’ll be proud to have on your driveway.

Blimey. What a properly swish and smart-looking car this is. pic.twitter.com/RrT4JGOnxa

How is the Proceed different to the Ceed and Ceed Sportswagon? 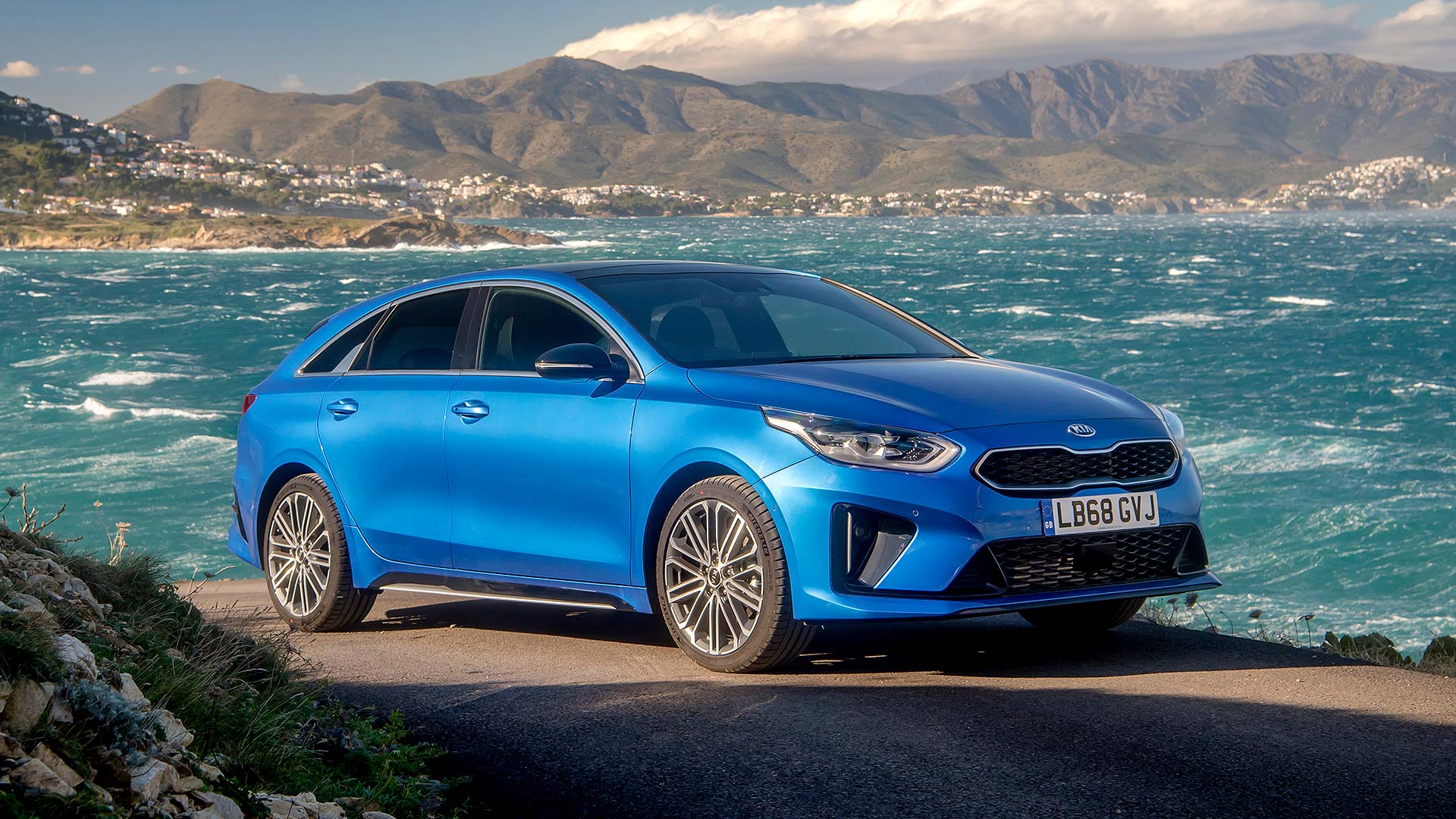 The Proceed is lower and longer than its sister cars. It rides lower to the ground and, for maximum impact, has ‘ice cube’ LED running lights and a Porsche-style LED light bar at the rear. The chrome ‘shark blade’ side window feature is pretty neat.

The rear screen is much more angled than other Ceeds. It’s 13 degrees more inclined than the squared-off Sportswagon, and sits a few degrees flatter even than the hatch. And this has benefits when you open the boot.

A boot for pros 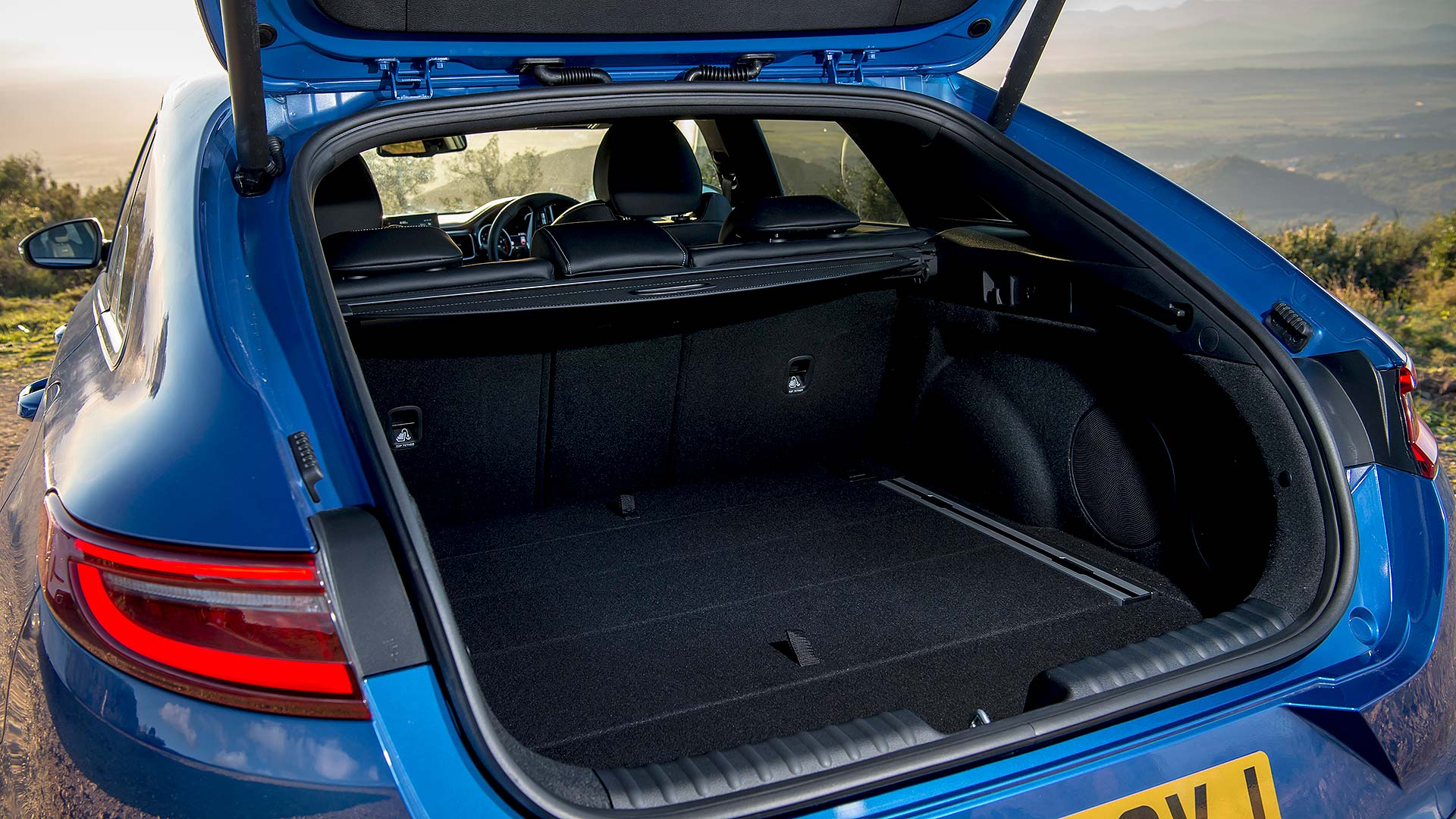 The boot is a mammoth 594 litres, not far shy of the estate’s 625 litres. Of course, you won’t be able to carry big, boxy items – slam the tailgate and you’ll smash the rear glass – but there is another surprise benefit to this open-plan load space: you can easily lean in and retrieve things.

No ducking down and crawling into the boot here. A high, flat boot floor eases things further, and if you pick the GT-Line S, you get 40:20:40-split rear seats. And a plethora of hidden cubbies beneath the boot floor. Cars this stylish are rarely as practical as the Proceed. 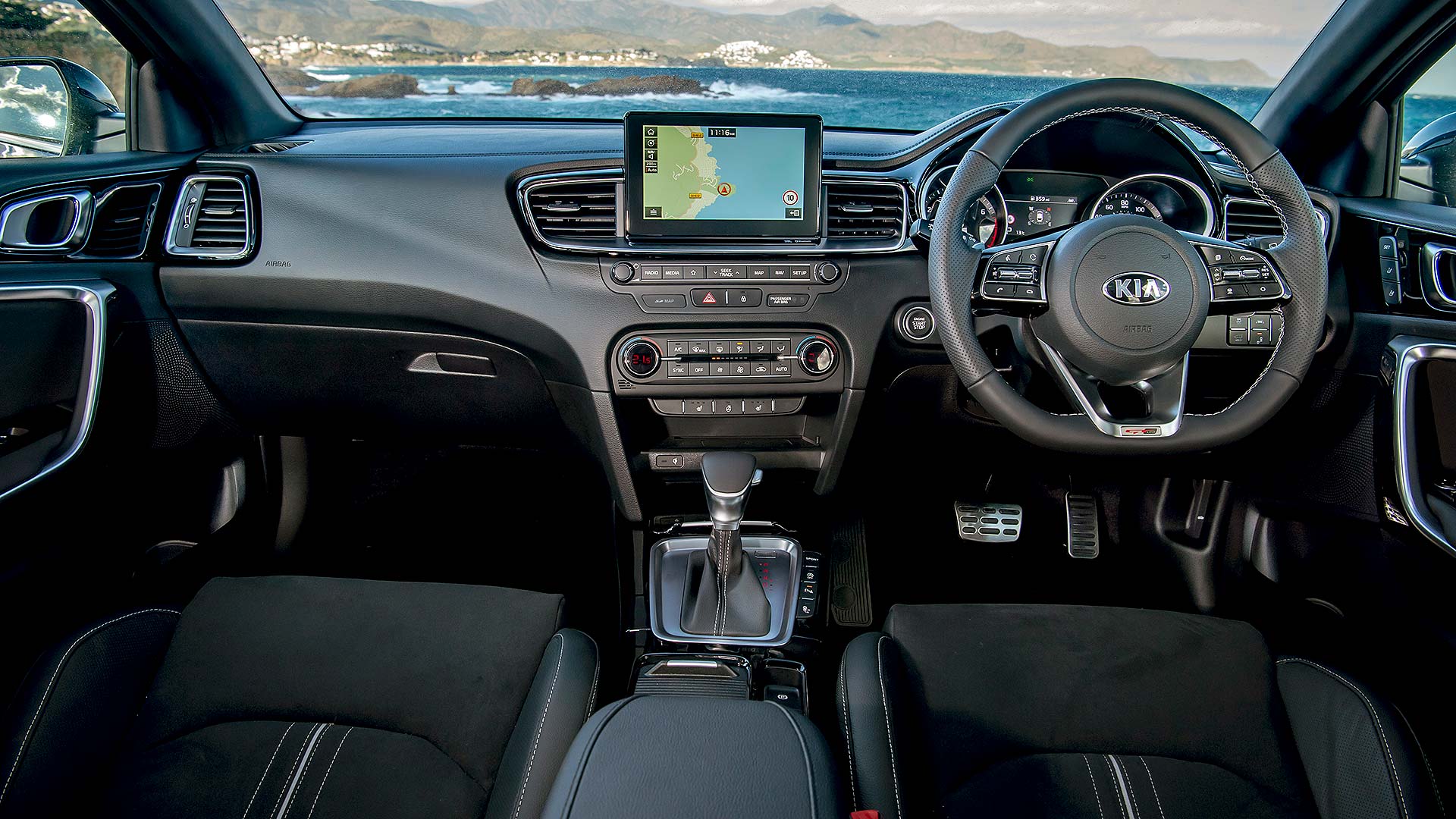 Inside, it’s more stock Ceed. That’s not a bad thing, as the new model has an upmarket appearance, a quality finish, and evidence of the soft-touch plastics they use on Audis and BMWs. The standard eight-inch touchscreen is easy to use (sat nav, Apple Carplay and Android Auto are standard on all) and the GT-Line S gets wireless smartphone charging.

The lower roofline doesn’t seem to hurt headroom, but rear footroom and legroom is a bit tight, due to the well-bolstered seats (and the standard power-operation on the S). Electric seats are mounted a touch high, but they’re firm and supportive, with chunky bolstering. A black rooflining and D-shaped steering wheel further up the sportiness.

Proceed to the road 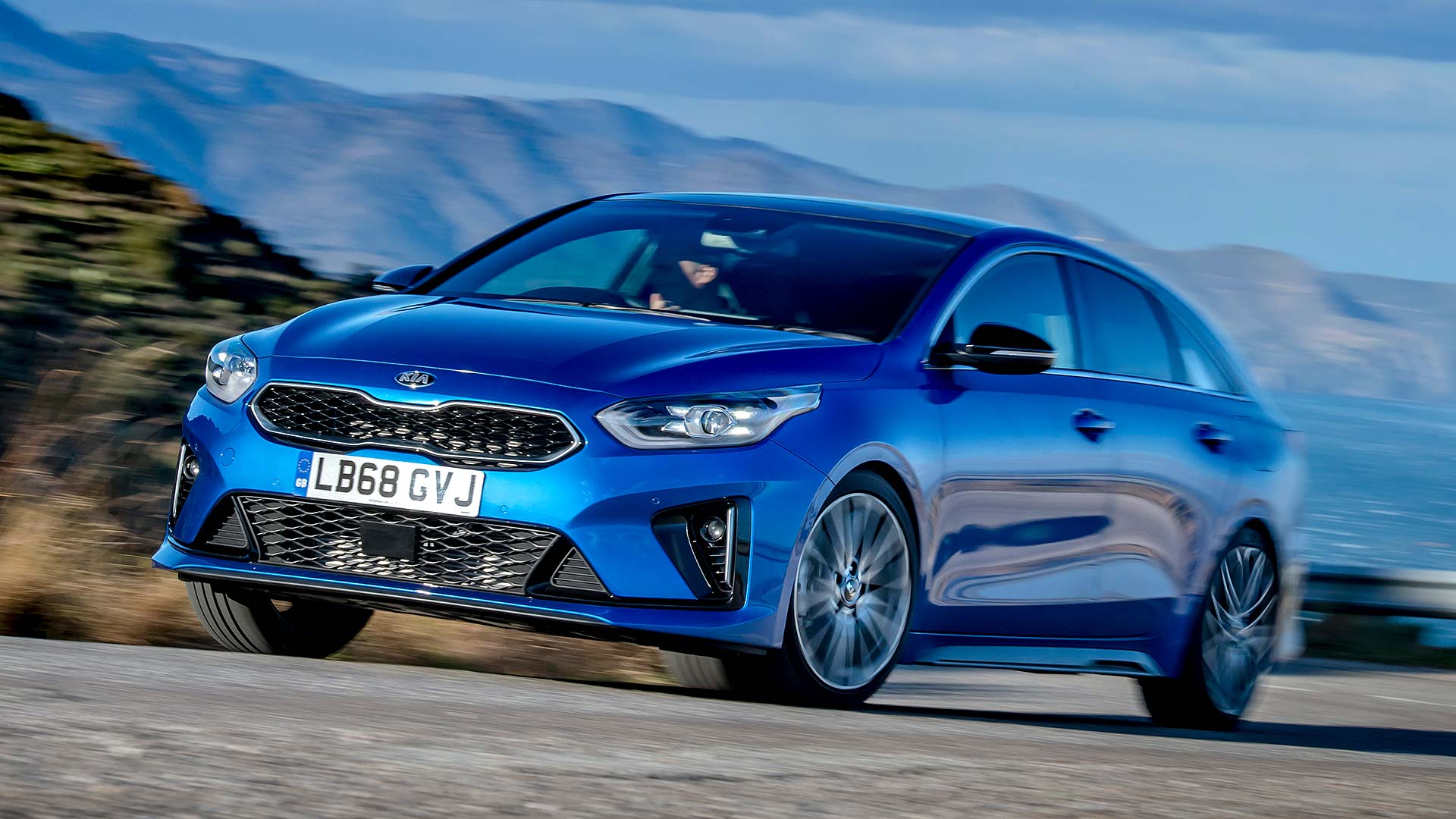 Once underway, refinement is the first thing that strikes you. This is an extremely quiet and classy cruiser, with little wind noise and forgivable levels of road roar. The ride has a plush feel, with just an underlay of knobble (and the occasional bit of harshness) on the 18-inch wheels of the GT-Line S test car.

We drove the 1.4-litre petrol engine with DCT auto. It’s a very good motor, hushed at lower revs and bearable even when revved, until you go over 5,000rpm, when it becomes thrashy and weedy-sounding. There are times you wish for a bit more pull, but generally its muscle is more than ample. The seven-speed auto complements it perfectly. 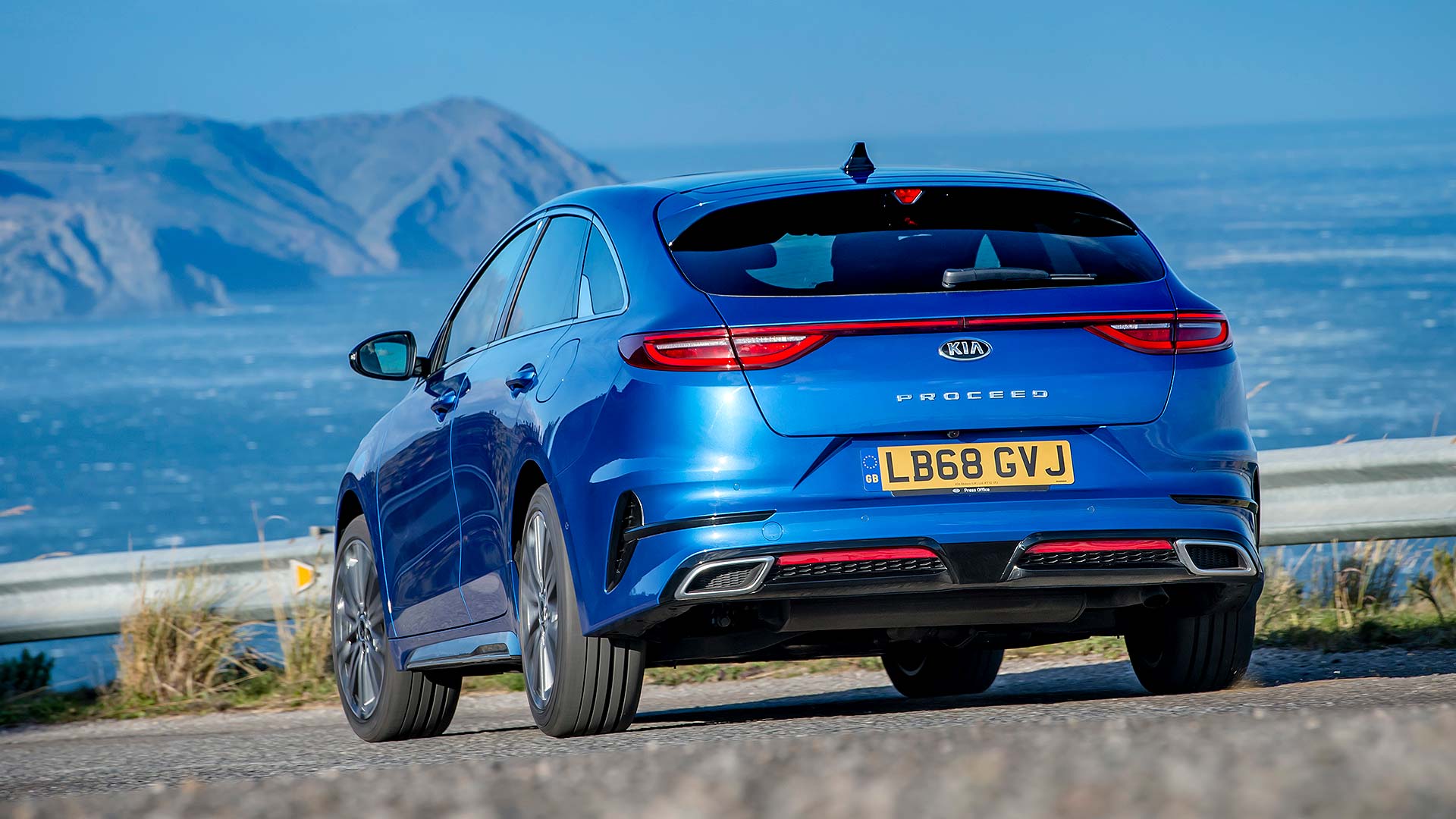 The Proceed proved to be an adept fast-road cruiser on scarred Spanish backroads. Quick steering, an engine that gives its best at mid-range revs and expensively-engineered suspension (it has a high-end multi-link setup front and rear, like a premium car) mean it punches above its price bracket.

The comfortable ride does mean it can roll a bit in corners if you chuck it around; there’s a firmer GT model (see below) if that’s your sort of thing. Better instead to enjoy the ride – oh, and the feel of the brakes, which are as nice to use as a BMW’s anchors. Again, they feel much classier than you expect in this sector. They’re a small, telling detail. 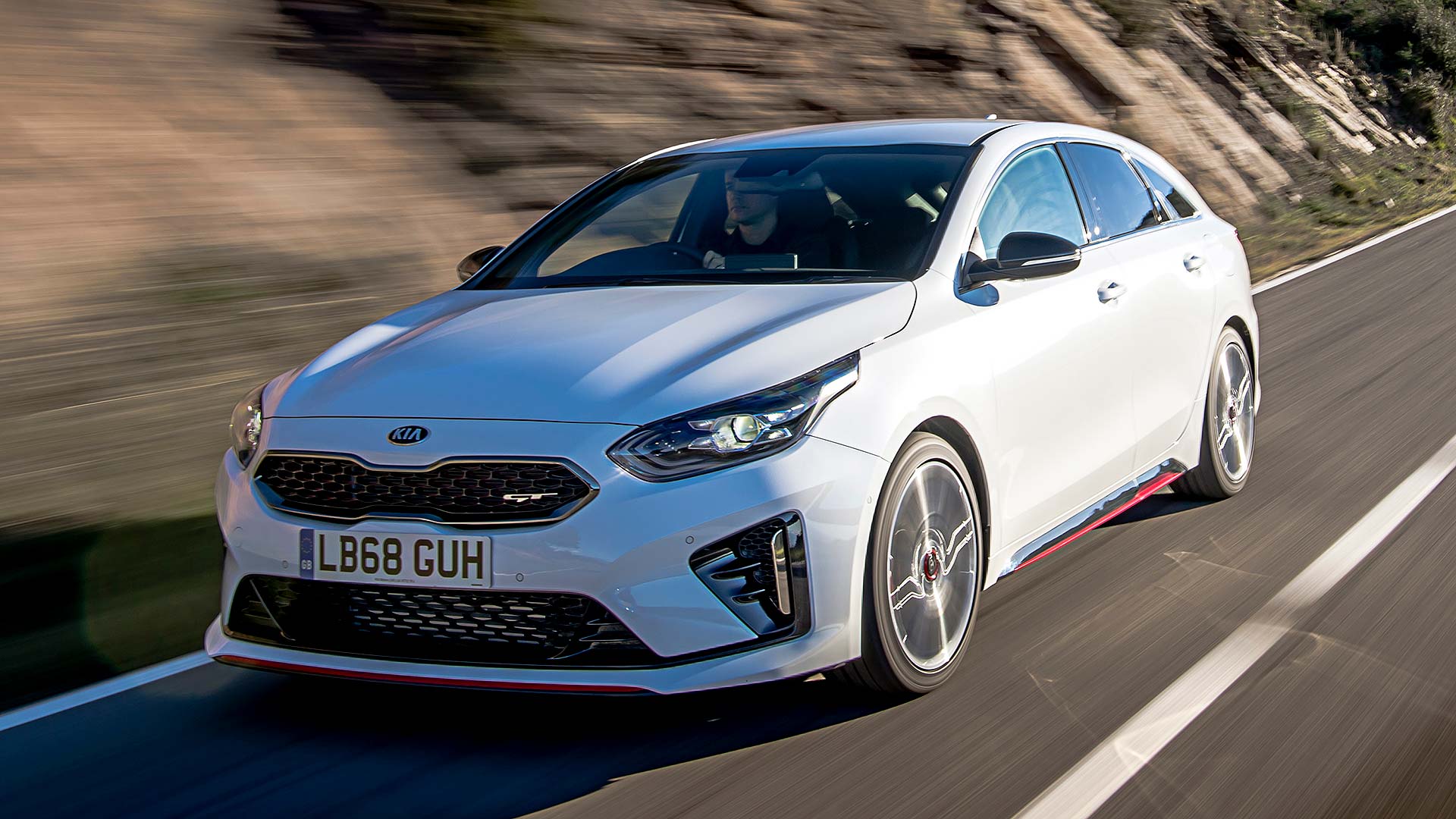 Want to go faster? The £28,135, 201hp GT is for you. It has stiffer suspension, so it rolls less and remains better controlled at speed, with admirably limited effect on the ride quality. For fast-road motoring, it’s satisfying – again, the quality suspension makes the difference.

The aged-feeling engine isn’t great, though. A 201hp output doesn’t go far these days. It only really starts to surge above 5,000rpm, and becomes uncomfortably loud beyond 6,000rpm. And it’s thirsty: we saw 22mpg after an hour’s fast-road driving (official is a poor 37mpg). It’s a GT, not a hot hatch. Unless extra speed is all, you’re better spending a just a few hundred more on the better-equipped 1.4 GT-Line S. It’s simply a nicer car. 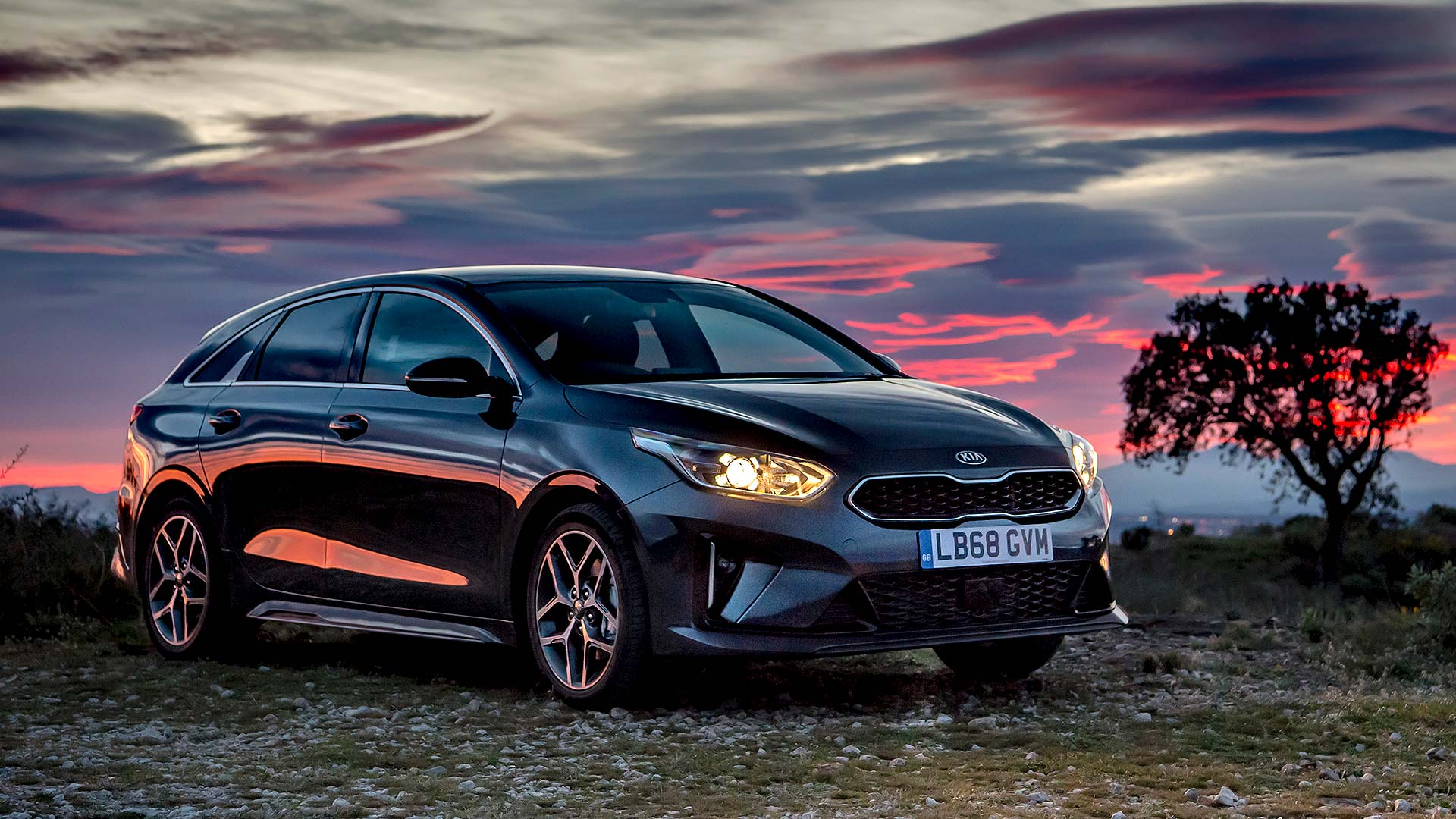 There’s also a diesel, supposedly a new ‘Smartstream’ 1.6 CRDi 134, complete with NOx-reducing SCR selective catalytic reduction tech (it has a nozzle for AdBlue in the fuel filler). It emits around 20g/km CO2 less than the petrol (claimed economy is 56.5mpg compared with 45.6mpg).

But it’s also not a great engine. The Smartstream makeover seems to have made it noisier and lumpier. Pulling away when cold, it sounds a little like a knackered Transit van. It hates revving much over 3,000rpm and makes a terrible racket, while only the DCT auto has the full measure of pulling power – torque is restricted in the manual, so it doesn’t feel as strong.

Unless your company car manager insists, go for the petrol (thanks to Britain’s ludicrous new diesel tax rules, the difference in your tax bill will be minimal, anyway).

What you get for your money 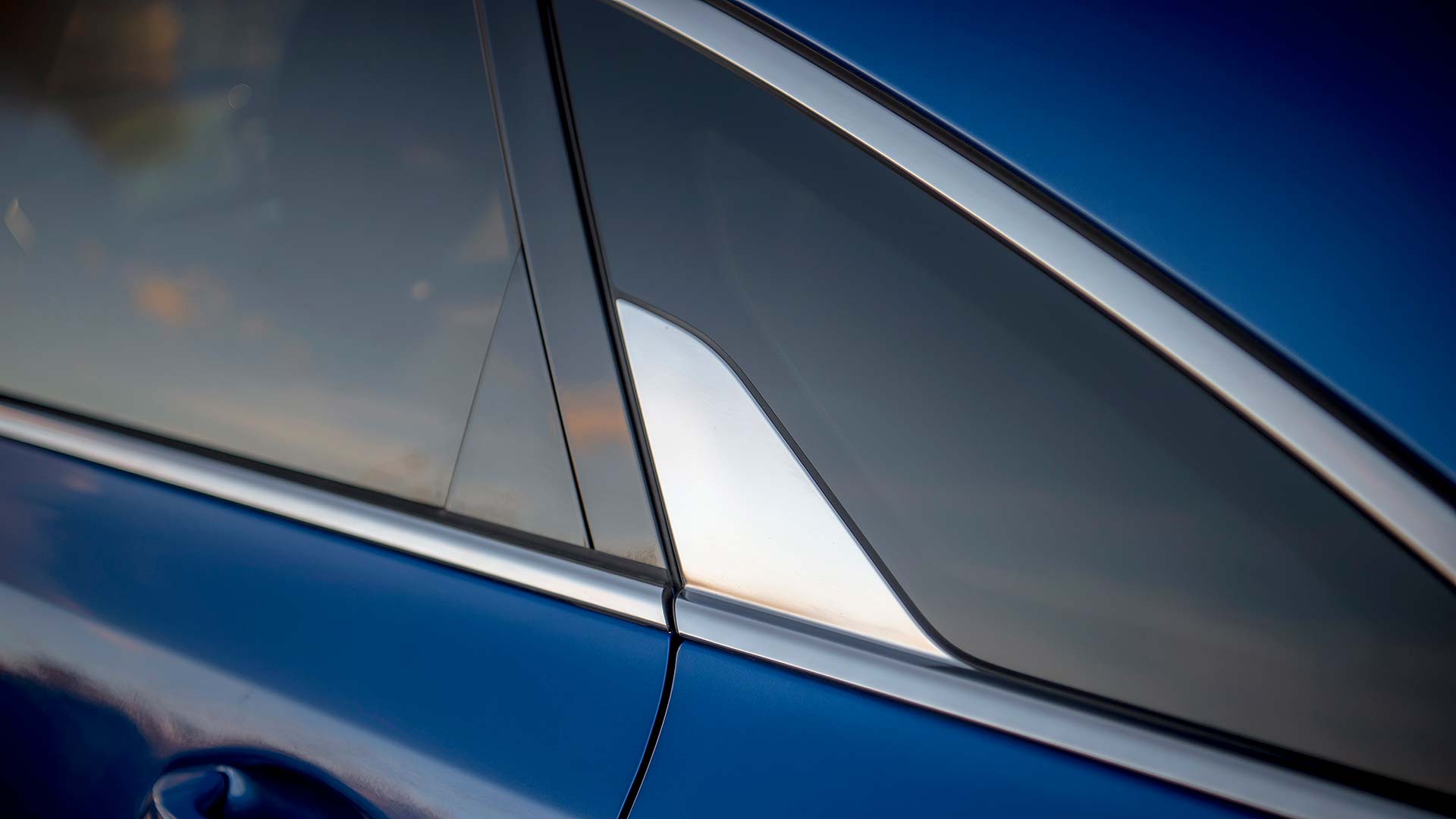 GT-Line S is top grade, only available as a 1.4 T-GDI DCT, for £28,685. It adds full leather seats (heated in the rear, too), 18-inch alloys, full LED headlights, a power tailgate, JBL audio, a large sunroof and blind spot warning. It’s a car that costs a similar amount to a basic Mercedes-Benz CLA Shooting Brake. We know which one we’d have. 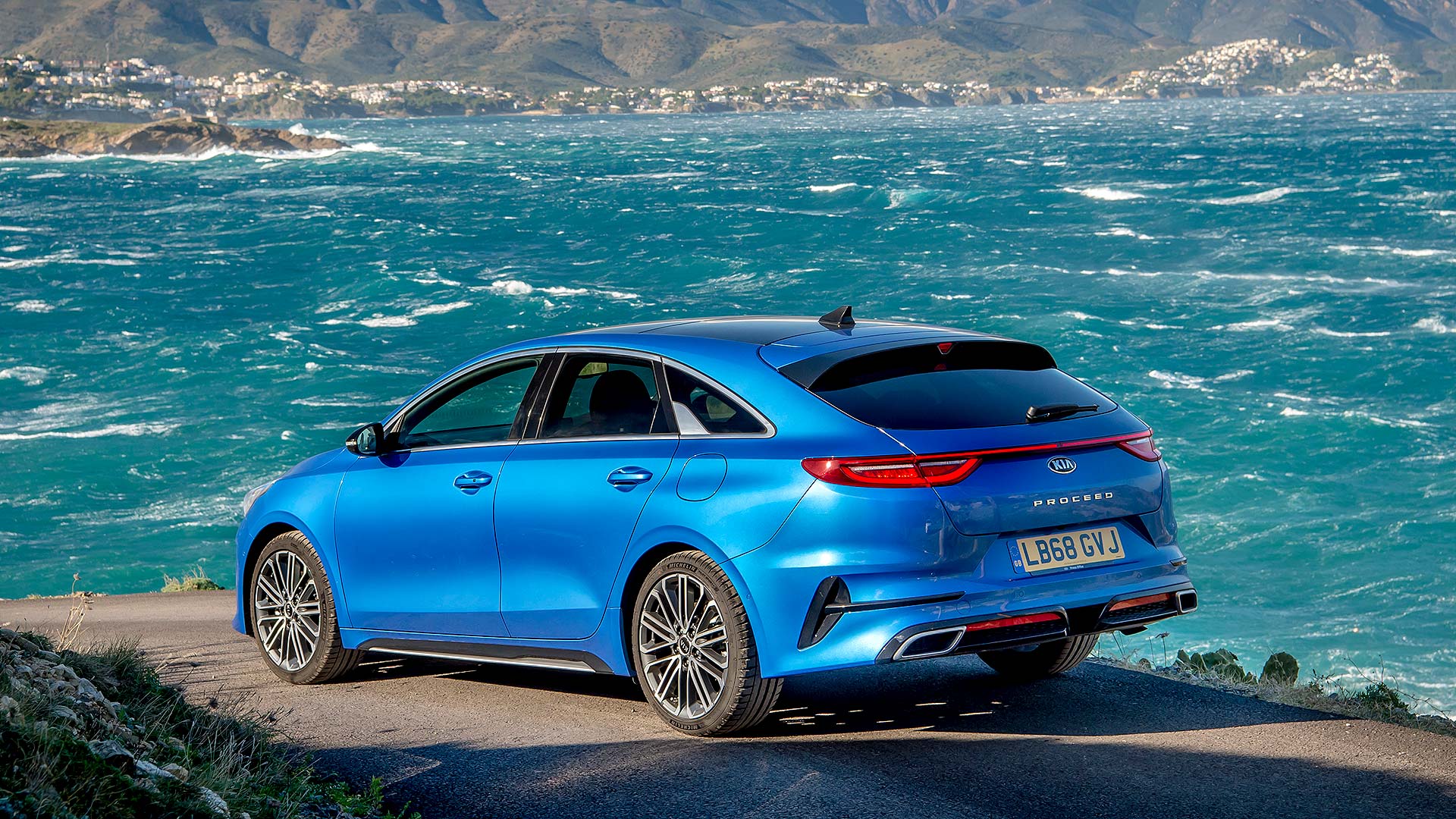 The Kia Proceed is a refreshing addition to the family car sector. Shooting brake-style ‘coupe-estates’ have been restricted to the premium sector for years, so it’s great to see Kia bringing one to the affordable family car arena. Particularly one that looks as good as this.

It’s surprisingly practical, decent value for money, drives nicely and generally offers a fittingly classy and upmarket experience. If you’re bored of family hatches, it shows you don’t need to move into an SUV to get something different – and you’ll win far more admiring glances with one of these, take our word for it. 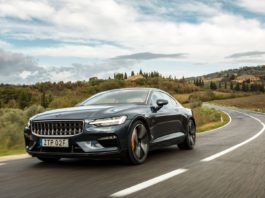 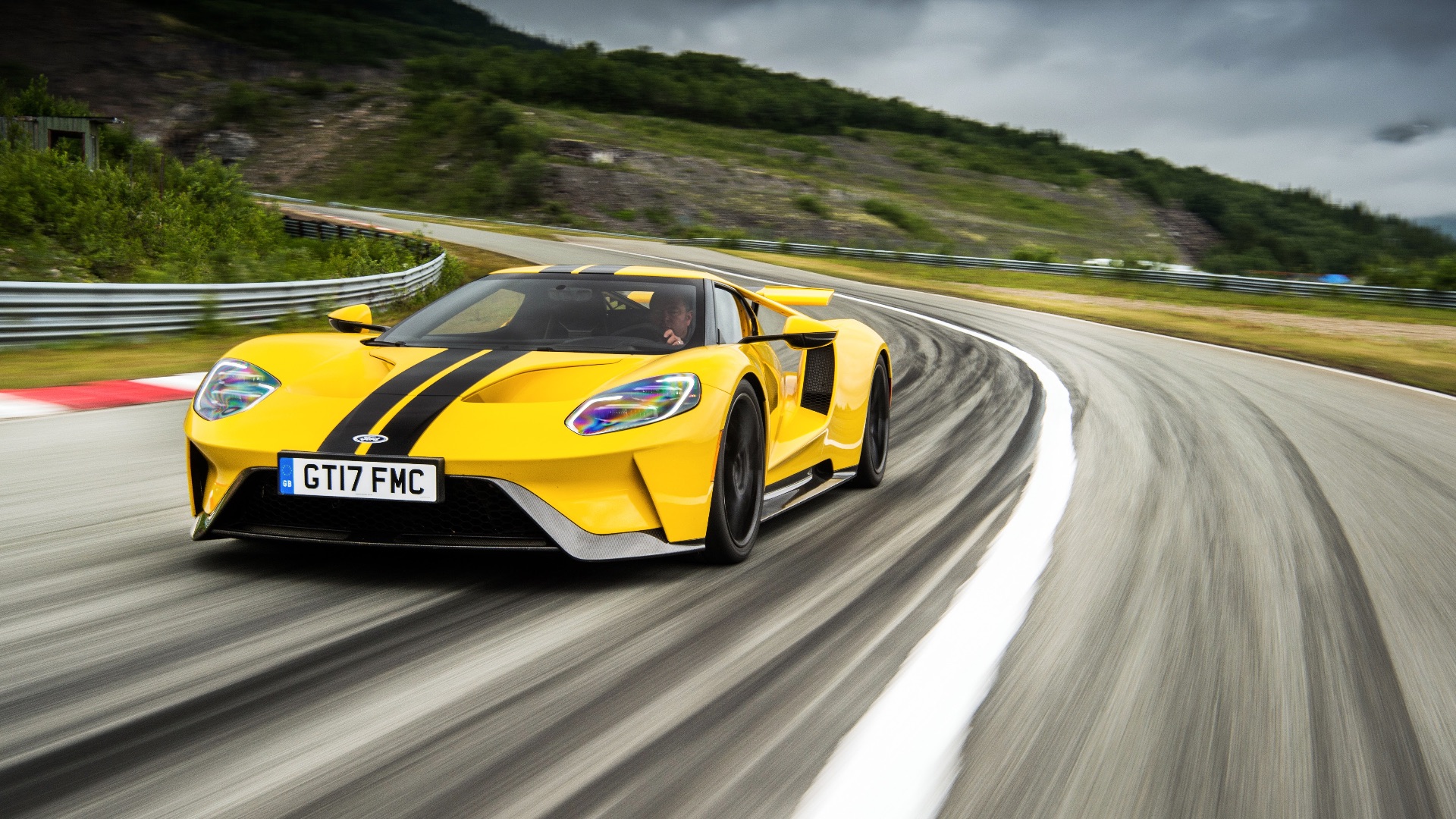