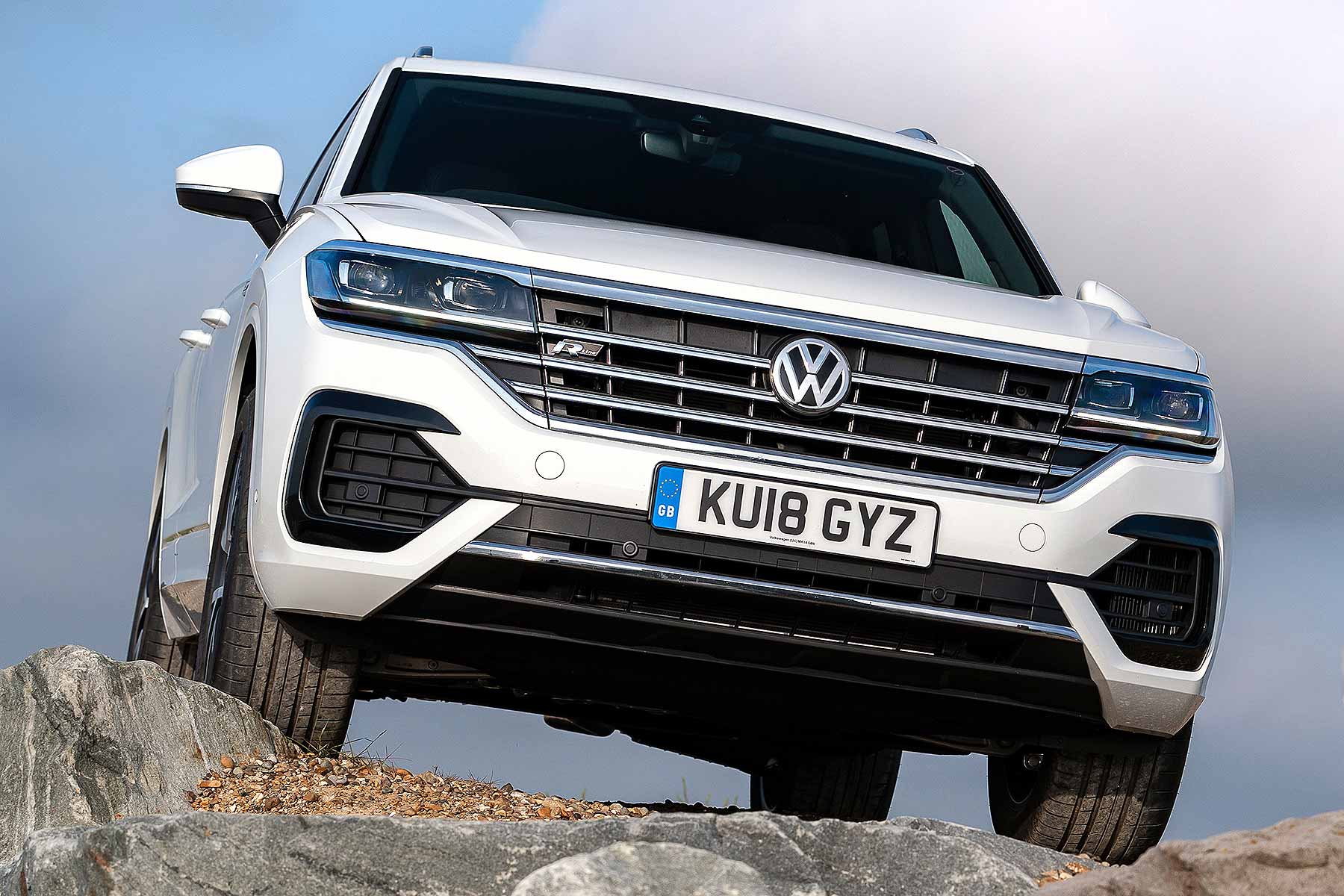 Meet the Volkswagen that, deep down, is a Bentley. And a Porsche. And a Lamborghini. And an Audi. Volkswagen Group popularised the shared architecture, that sees cars from different brands share common bits beneath. It’s barely worth a mention when you’re talking about Golfs, Octavias and Leons.

But here, it’s really special. Because, in using the MLB Evo architecture, this is a Volkswagen that uses innards also breathed upon by premium, performance and luxury brands. It’s a different level of sophistication. And as the Touareg is the (relative) bargain of the bunch, it’s why this third-generation range-topping VW SUV is worthy of your attention. 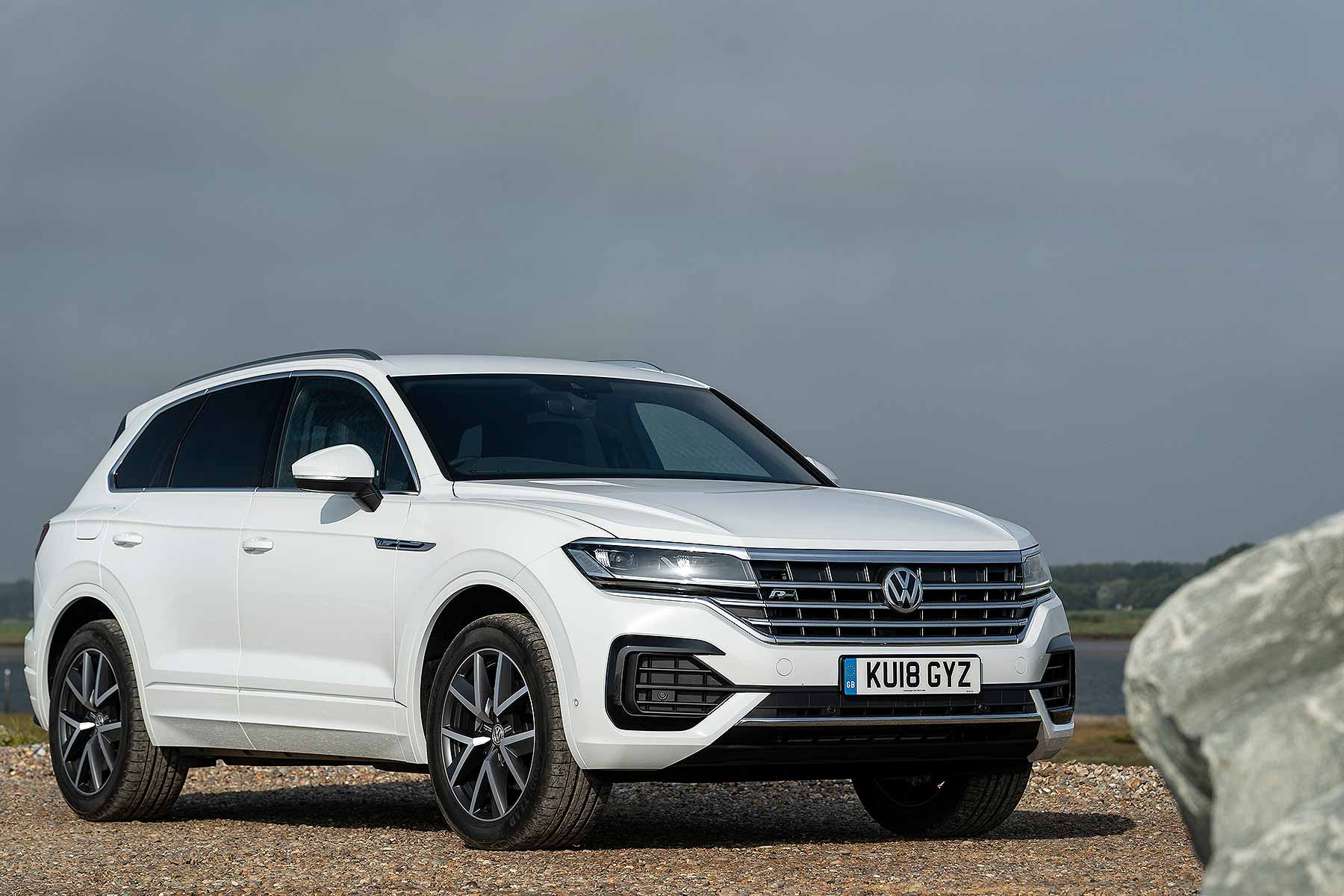 For now, there’s only one engine, a 286hp 3.0-litre V6 turbodiesel, with an eight-speed auto. A lower-powered one will follow later, as will a turbo petrol (let’s see how long its brave buyers still castigate diesel once they discover the real-world economy) and a hybrid, although Volkswagen UK was oddly vague as to when this will arrive.

The range is simple: there are three of them. SEL, R-Line, R-Line Tech. Volkswagen expects most to bypass the base SEL and pick an R-Line; as the SEL is £51,595, an R-Line is £55,095 and the jump to an R-Line Tech is a relatively manageable £3,100, it’s likely that could prove most popular. With good reason, as we’ll see. 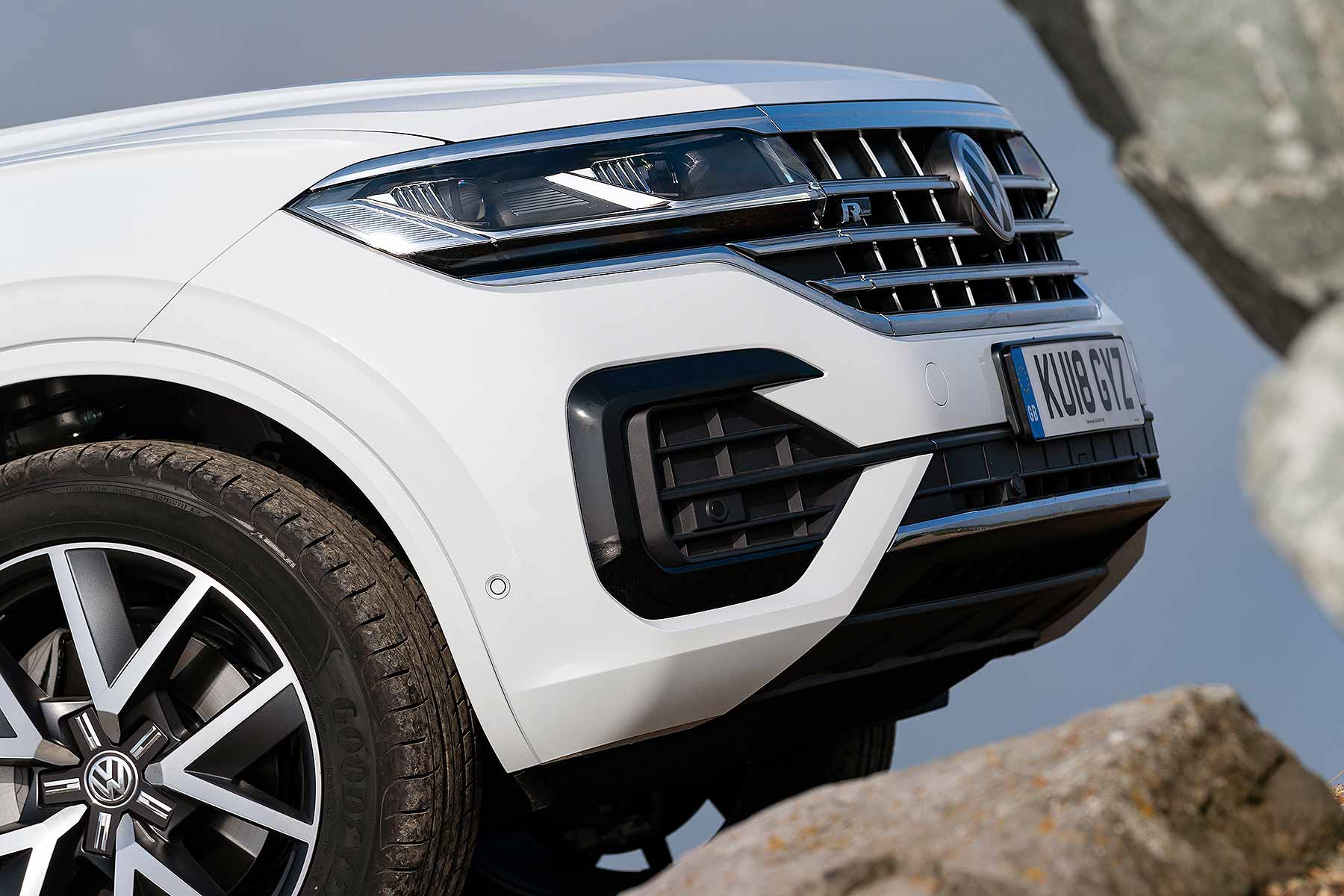 The first Touareg was pretty. The second, forgettable. This one is standout, thanks to its gigantic full-width front end that blends grille into headlights. It’s a bit of a surprise for humble old Volkswagen to be giving us a car this shouty, but I grew to like it, and the quality of the finish helps it look luxurious rather than chintzy.

As always, the body engineers have shown off with some expensive-to-stamp shapes in the panels (the side surfaces are a precision-built work of art) and the proportions also look right: long wheelbase, well-managed overhangs, cab-rearward stance. Dare I say it’s better balanced than the somewhat bloated Bentley? 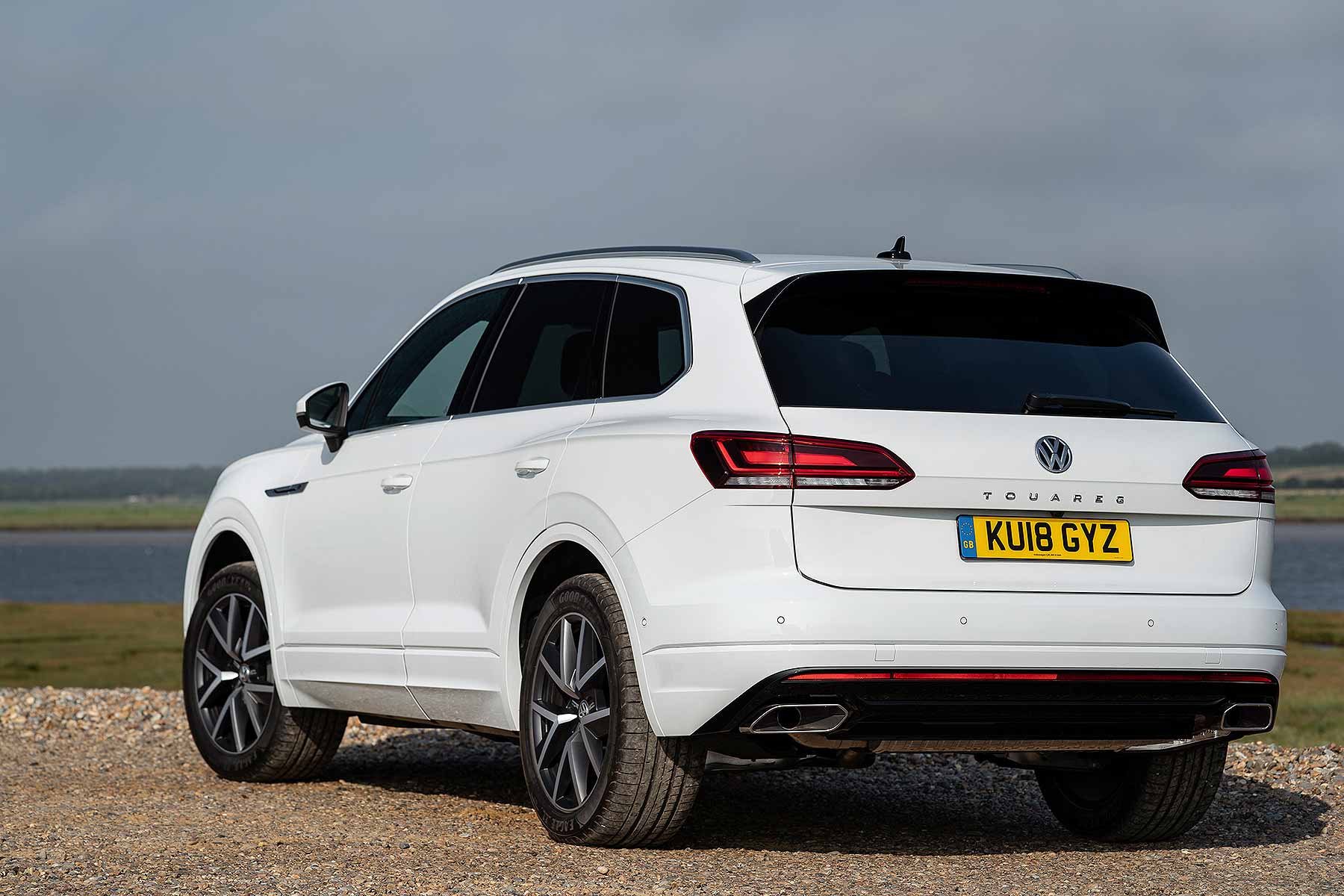 This range-topping Volkswagen thus has premium-level kerbside appeal, easily the equal of rivals such as the Volvo XC90, BMW X5 and, of course, the Audi Q7. That it’s so big will also leave you in no doubt it’s the firm’s halo car. It’s the one you’ll have to check out at showrooms, just because it’s such a posh status symbol. And you won’t be disappointed. 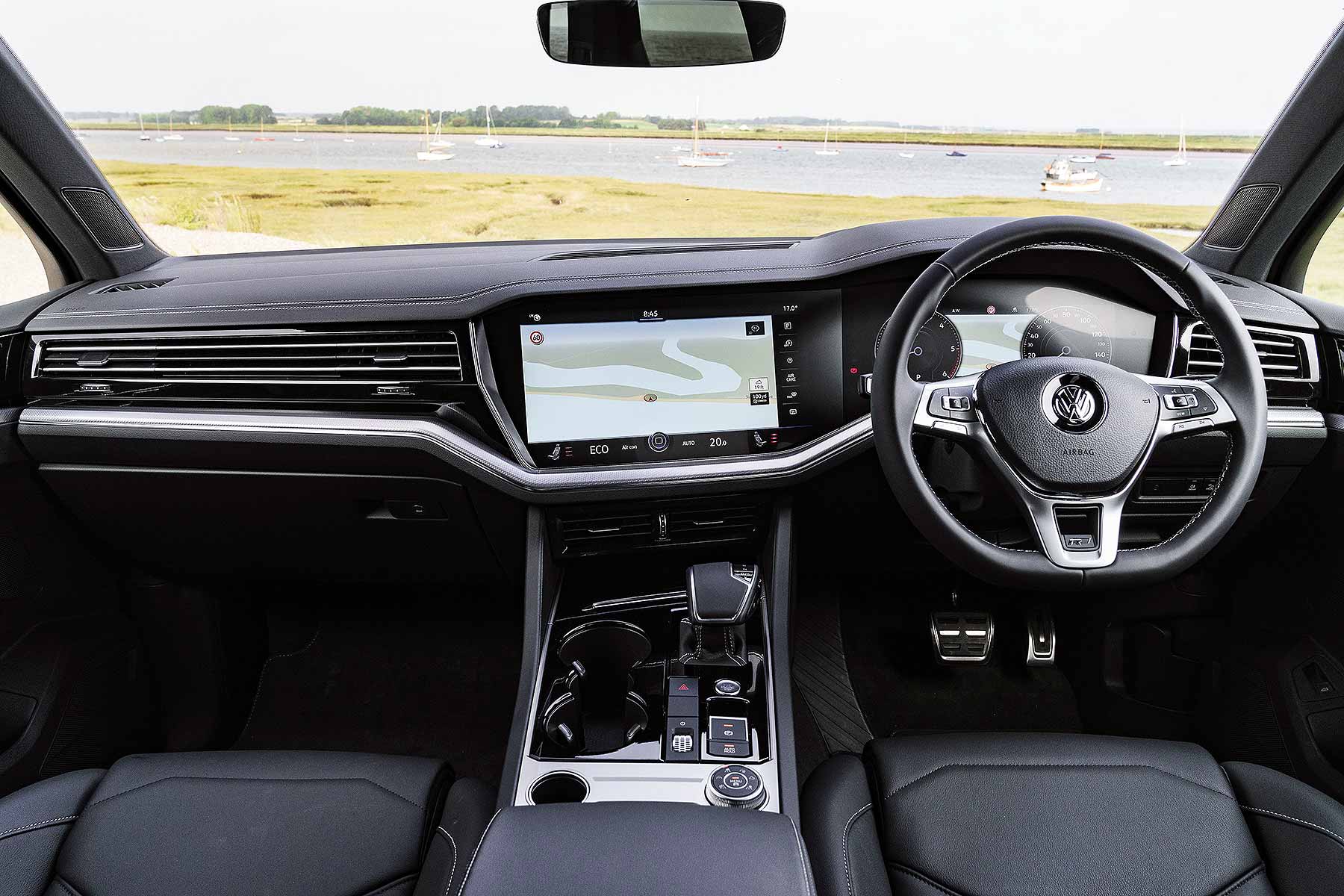 Of the three grades of Touareg, the UK launch range naturally concentrates on the range-topping R-Line Tech. That’s because it’s the one that gets the full digital cockpit experience (it’s called Discover Premium) – and what an impact this makes when you first step inside.

Instead of a button-packed centre console (or the semi-button packed layout of lesser models), this Touareg has an ultra-modern glass 15-inch screen layout, a bit like a Tesla, but with a landscape rather than portrait screen format (it’s more usable and safer because your eyes aren’t darting up and down so much, argues Volkswagen).

Set within a metal surround shaped to mimic the grille, and complemented by a digital instrument cluster, it looks very futuristic – and, thanks to a special surface coating, relatively fingerprint-free. Even better, boot it up, and the high-definition display looks superb. 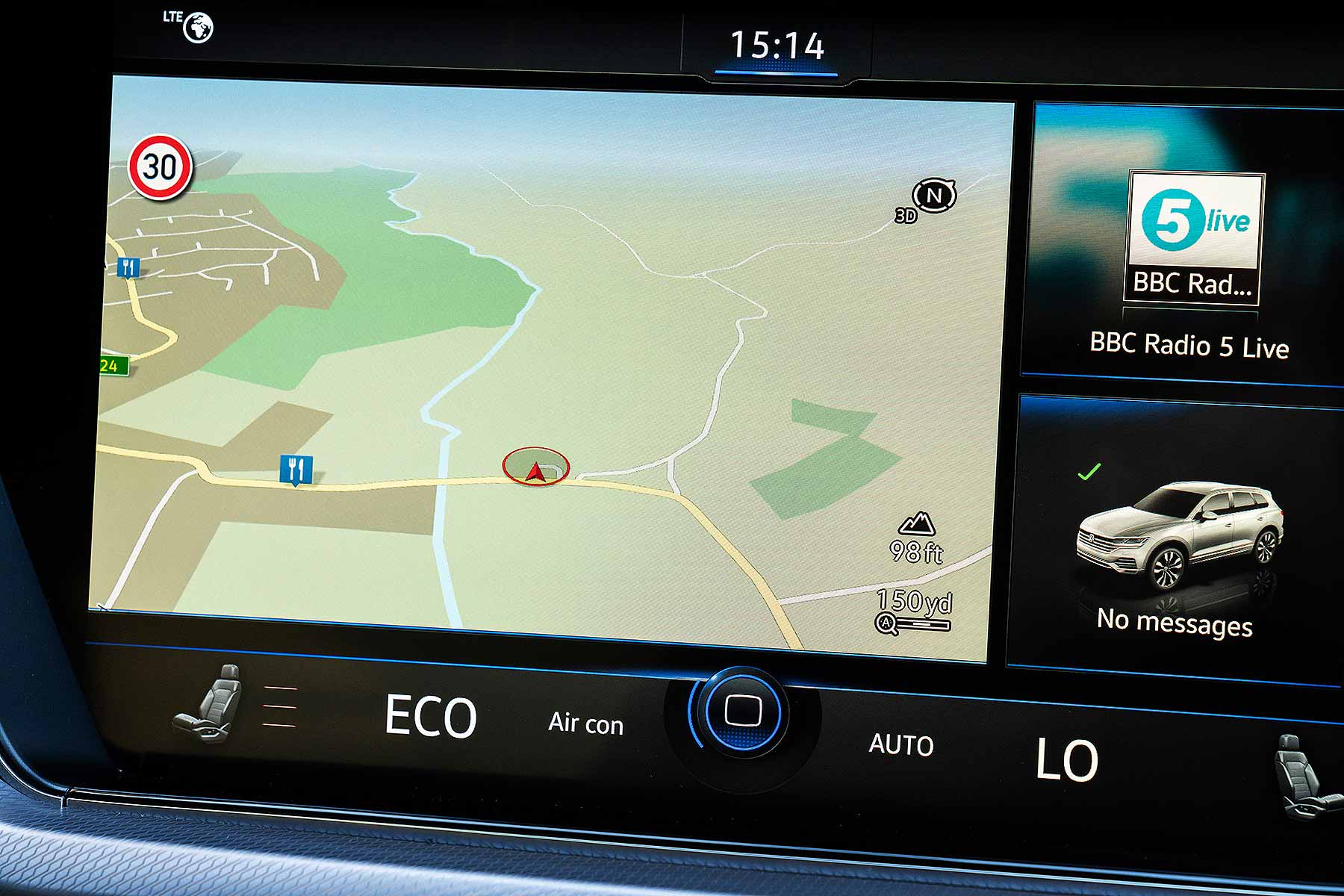 You need to spend time learning how to use it. That’s why Volkswagen gave us the car for a week, rather than a few hours. It’s a little bewildering at first, but with time, you learn that the logic behind it is similar to a smartphone: swipe sideways, swipe down for master menus, go ‘home’ by touching the Apple-like blue circle and so forth. You’ll learn it and understand it rather like you do with your phone.

And boy, is it feature-packed. And fast – you can touchtype sat nav instructions and it keeps up. Some systems have ‘haptic’ feedback, that confirms when you’ve pressed it. No need here, says VW: the system’s so fast, it’s virtually intuitive. The only odd feature? The screen’s so big, the standard-sized Apple CarPlay screen looks unusually small within it – a niggle we may see on other cars as screen sizes increase. 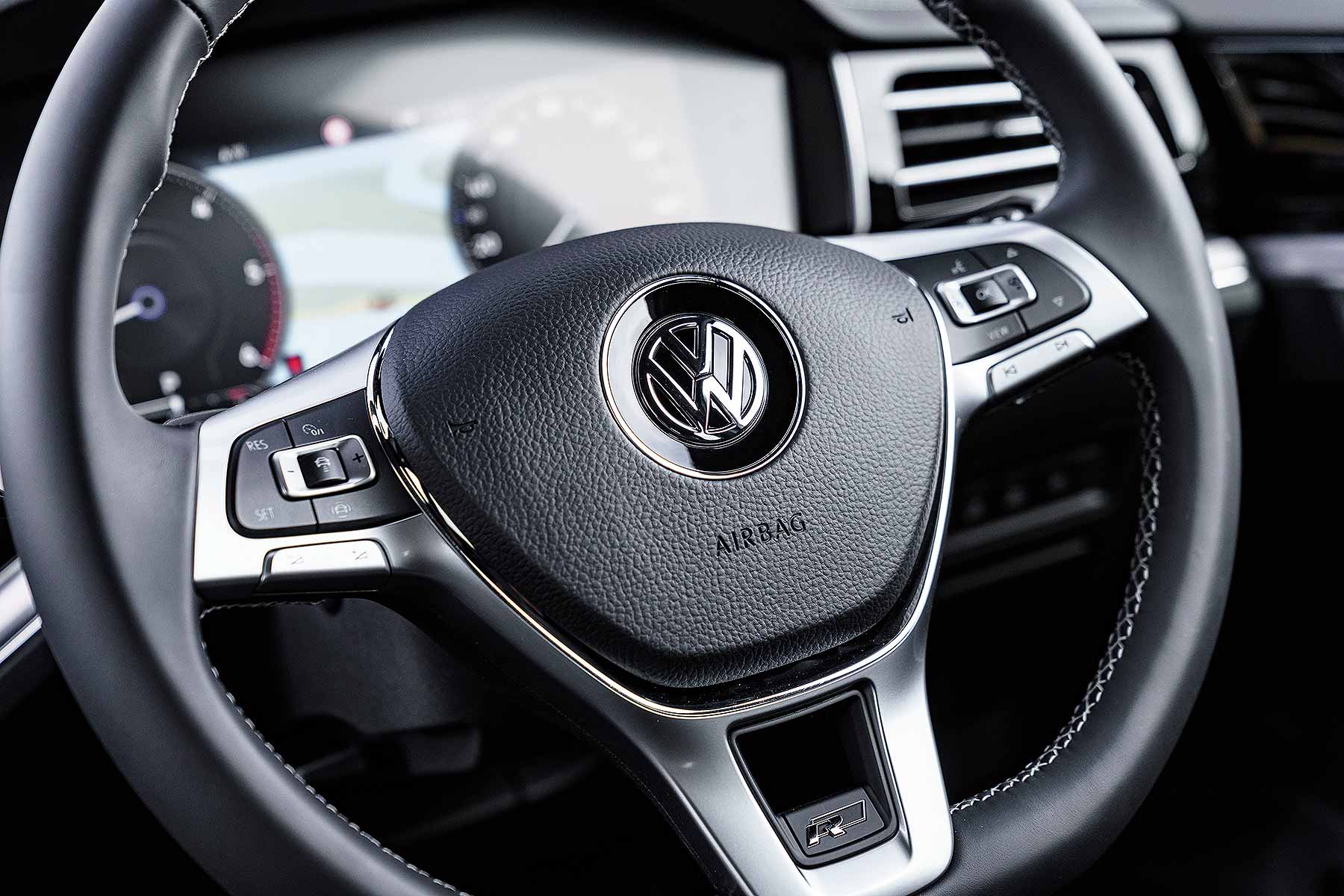 There’s lots more to be wowed by inside the Touareg, from its fantastically tactile quality, armchair-like seats and regal view out. It’s so panoramic, it feels not far shy of a Range Rover. At night, ambient lighting illuminates the trim inserts and by day, you can enjoy surveying a cabin laden with materials that feel as good as they look.

It has the room to take all shapes and sizes up front, and the three people in the rear will feel rightly well off. If it’s good enough for those being chauffeured in a Bentley, remember. The boot is mammoth and, like stepping into the front seats, there’s no sill to get in the way. It’s a very fine way to carry five people and their stuff in luxury comfort. 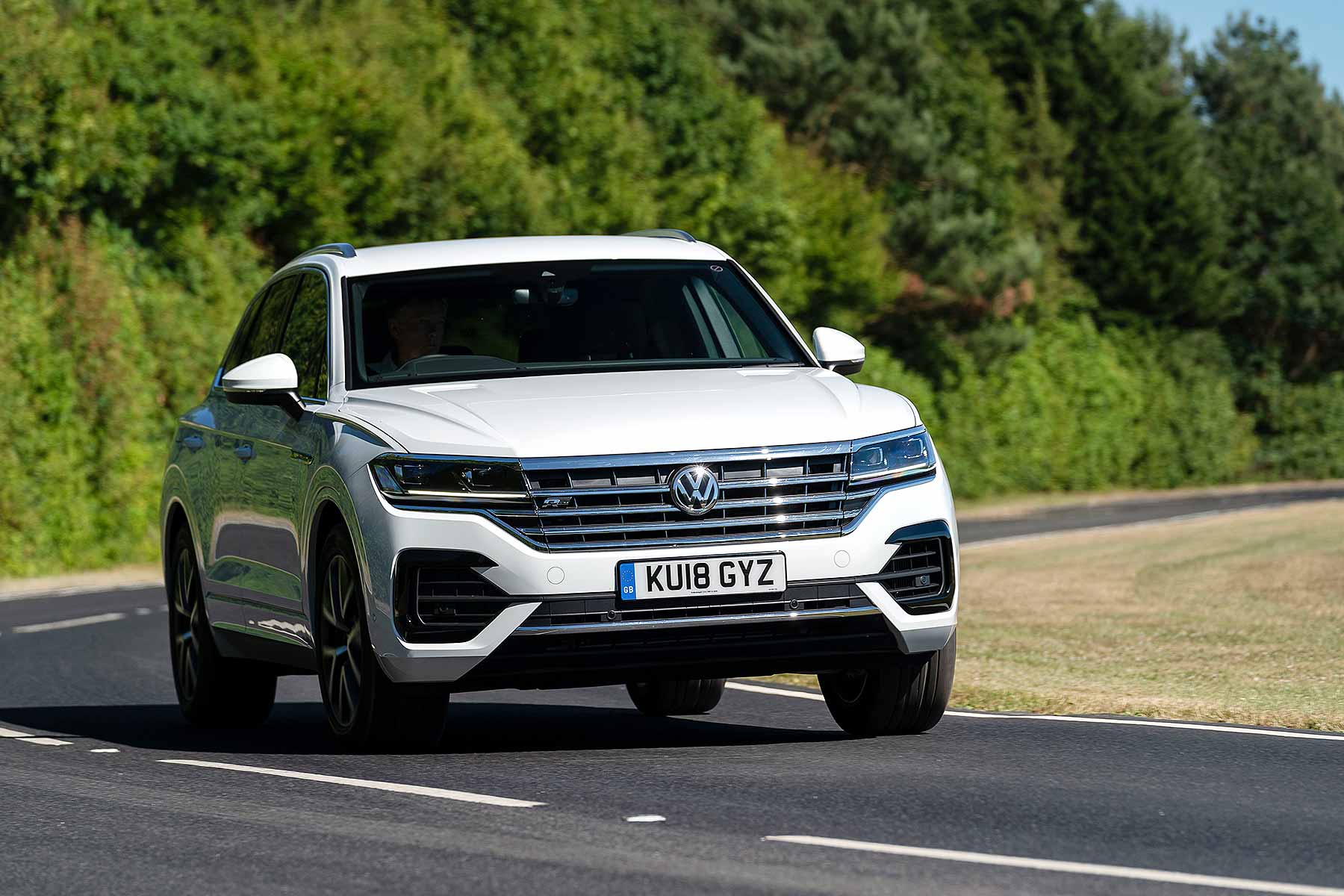 Fire the V6 turbodiesel and it’s immediately apparent this is something special – because it comes to life with not a trace of clatter or vibration. It’s silky-smooth, like a big-engined Bentley, and continues to impress on the road with a free-spinning feel, smooth-shifting gearbox and, when you let it rev a bit, surprising pace.

It’s a deceptively swift overtaking machine, this 286hp Touareg; 0-62mph in 6.2secs exposes a bit of its potency, but more significant is 442lb ft of pulling power from 2,250rpm to 3,250rpm. It really does pick up and surge in a hugely satisfyingly way.

It generally rides really nicely, with (optional) air-cushioned plushness and a stable, float-along feel. At speed, on the motorway, it’s rock-solid and assured, easing long distances like having a hot bath full of Radox. So why qualify it with ‘generally’? Because my car was fitted with optional 21-inch wheels, which could clatter loudly into potholes at times. The angry disturbance really contrasted with the general comfort. I think I’d stick with the standard 20”s. 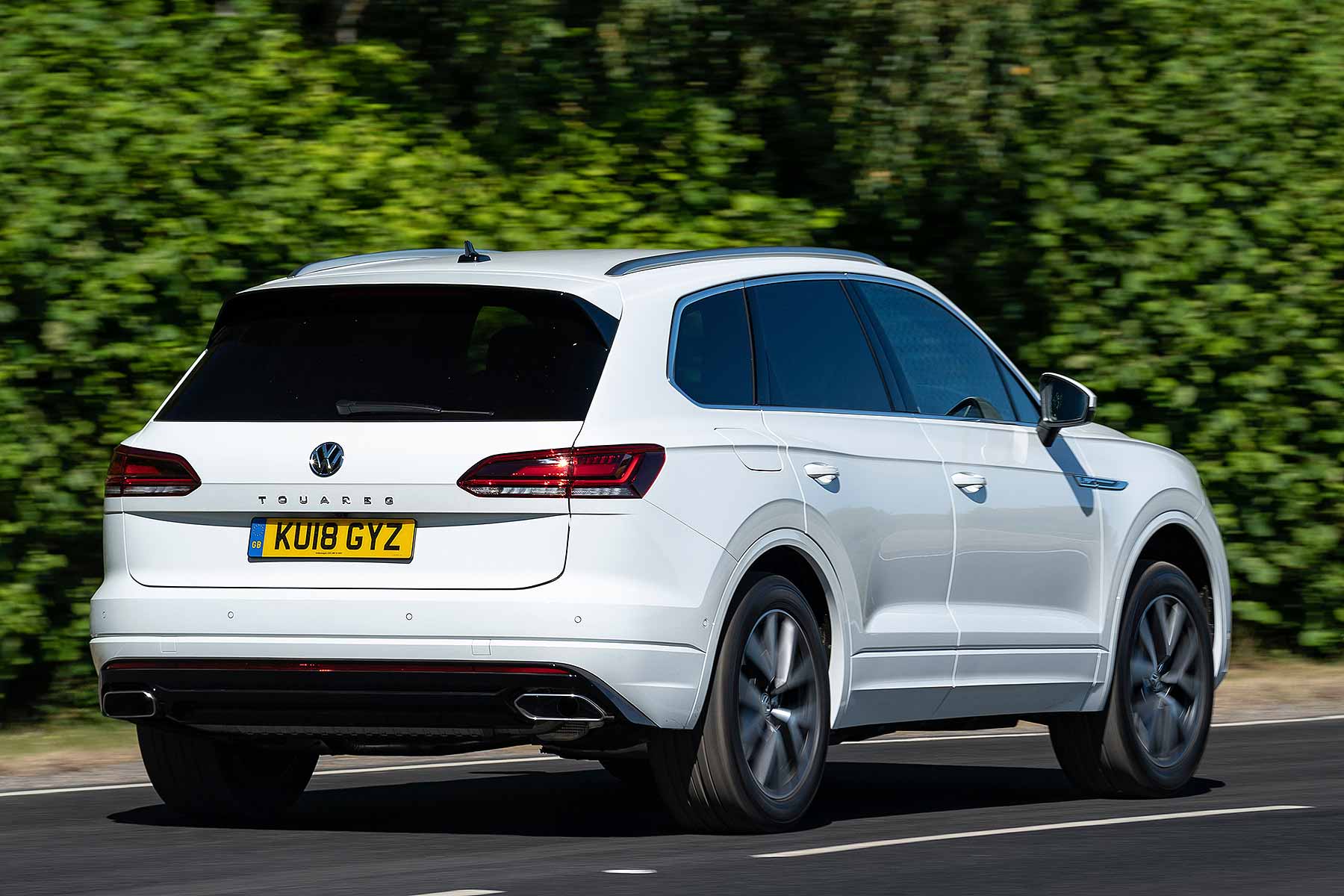 For such a big car, it’s easy to drive. Again, the test car had optional rear-wheel steering (it comes with air suspension, for £2,370), which gave it almost a hot hatch-like responsiveness on turn-in. The nose could be tucked into corners eagerly, aided by firm and well-weighted steering. You don’t expect a big VW SUV to drive this cleanly. Must be the Porsche and Lamborghini influence coming through…

And the general experience? Like being in a Bentley. Noise levels are outstandingly low at speed, there’s power on tap, the ride is lush and stability is such that nothing sees it barely hint at being knocked off course. It’s an incredibly satisfying machine to cover high miles in – and, on one run, seeing 50.9mpg on the trip computer suggests fuel stops could be minimal.

Although it is just a few millimetres short of two metres wide, tight steering and its good visibility means it’s not as tricky to drive in town and on narrow roads as you might fear. It takes a little getting used to, but the Touareg is easy to manage and both light and stress-free to drive. 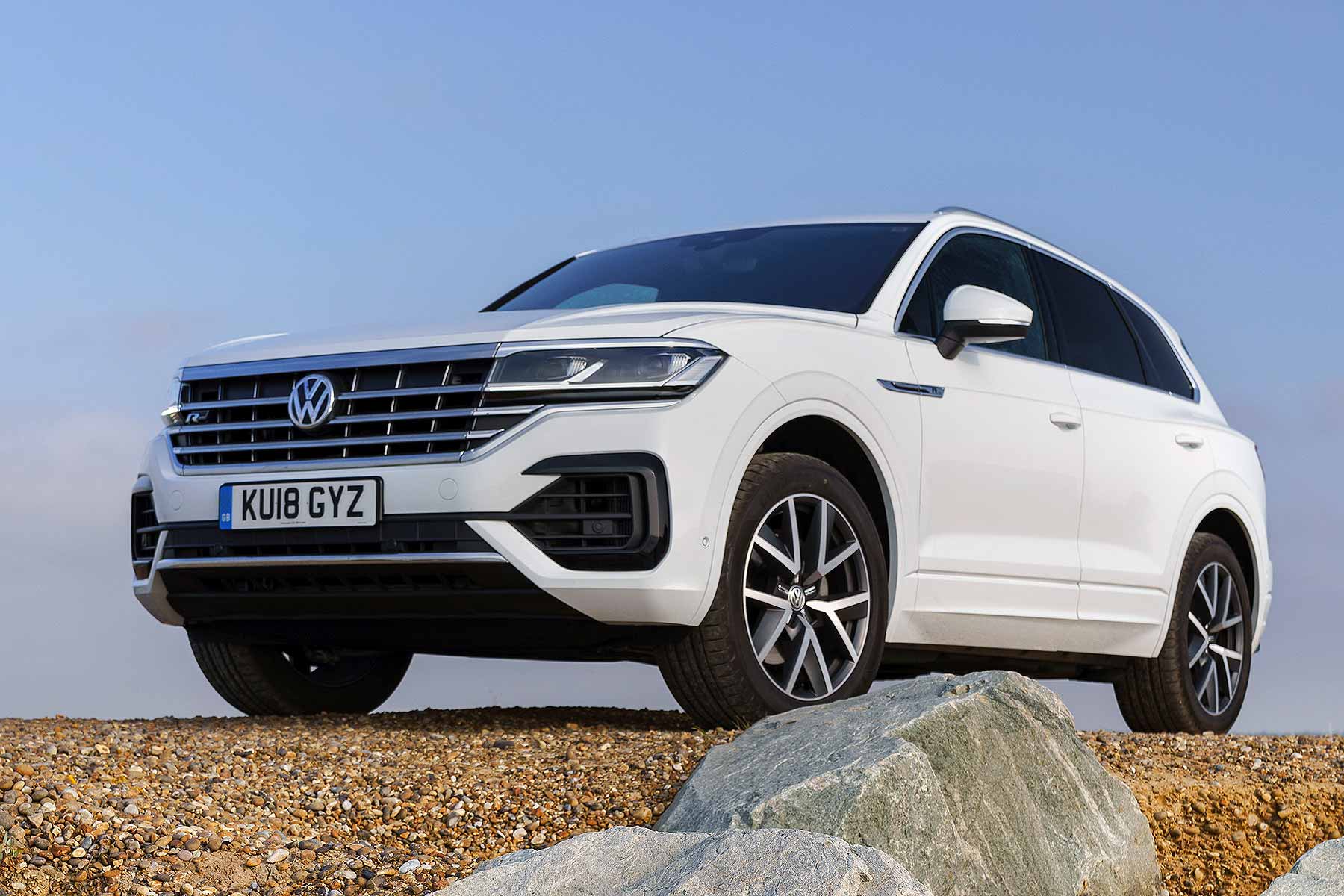 Volkswagen finally has a range-topping vehicle of note – one dealers can be proud of. The Phaeton never really cut it, the first-generation Touareg was charismatic but imperfect, and the second one was vanilla. This one, though, is a grade-A luxury machine that warrants consideration alongside a Volvo XC90, maybe even an Audi Q7. It really is that good.