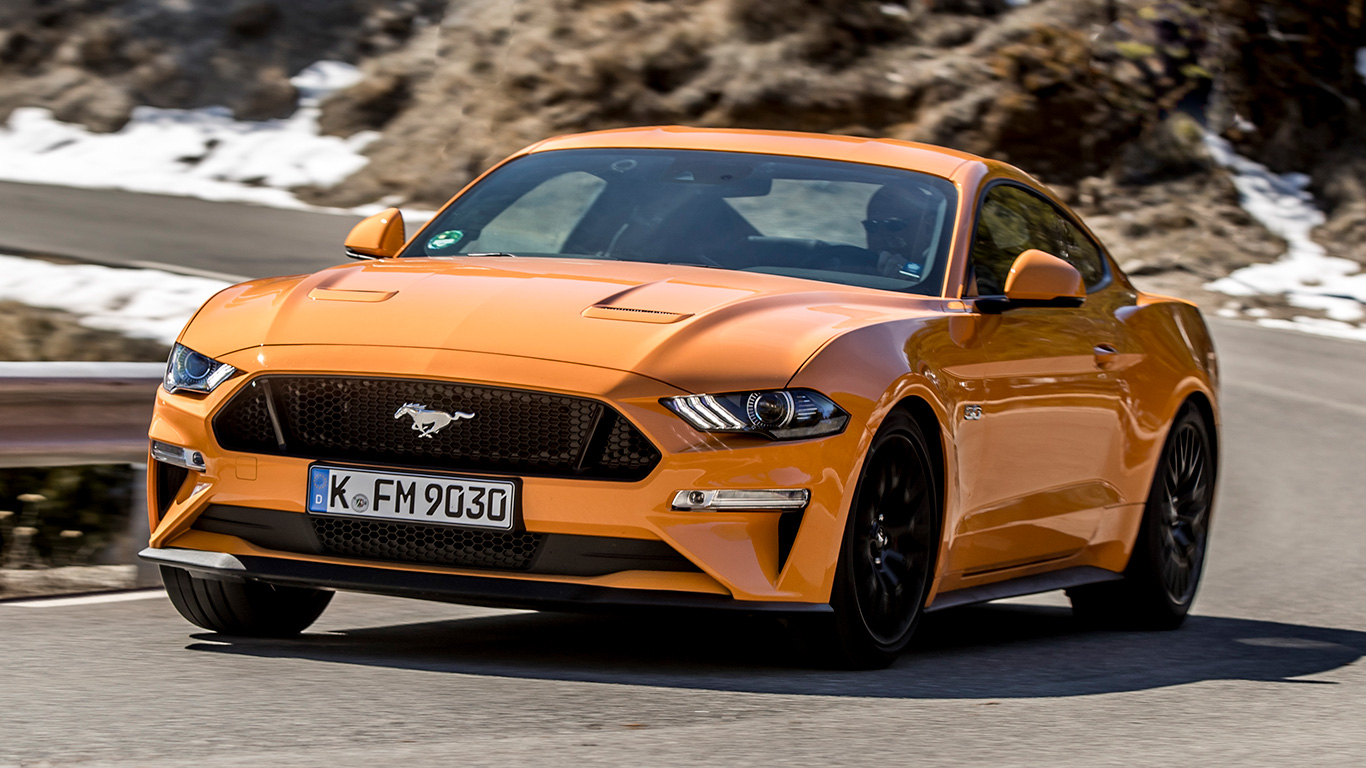 Ford says the Mustang is the best-selling sports car in the world, shifting 33,000 units and toppling Porsche in the process. But is it really a sports car?

Up until now, I’m not convinced. The current ’Stang looks cool and goes fast, but it’s always felt slightly out of its depth on European roads. Can the MY18 updates unleash the pony car’s inner racehorse? A long drive on France’s famous Route Napoleon will provide answers.

Here are the 10 things you need to know about the 2018 Ford Mustang. 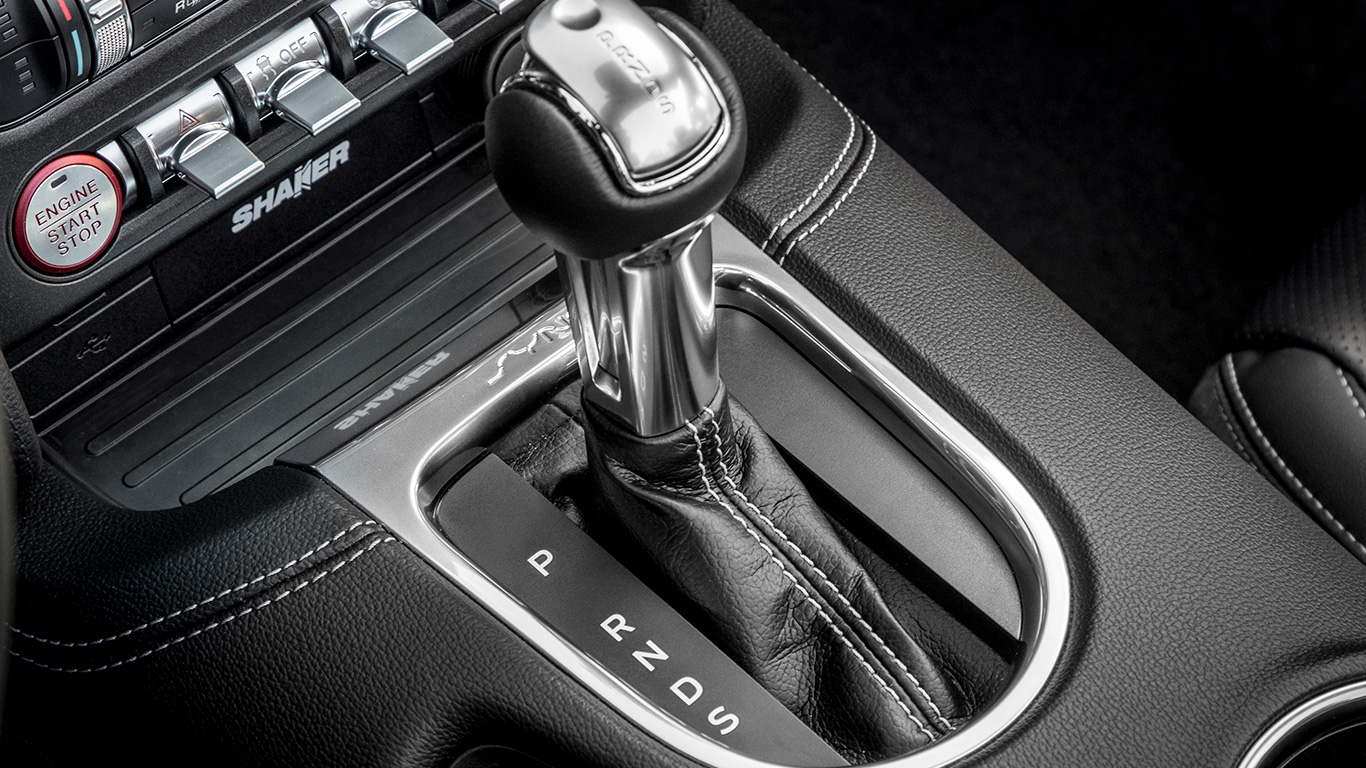 Drivers of the original 1965 Mustang settled for a three-speed Cruise-o-matic auto ’box. The latest car offers seven additional gears, with paddles behind the steering wheel for shifting manually.

Available with both V8 and four-cylinder Ecoboost engines, this isn’t a dual-clutch transmission, but it offers ‘direct downshifting’ – meaning it can shift up or down several ratios at once. It also improves the V8’s fuel economy, albeit by a measly half-a-mile per gallon.

On the road, the auto feels quick and intuitive, particularly in Sport mode. It isn’t a smooth as some rivals, but it’s perfectly up to the job. I still prefer the slick and snappy six-speed manual, though.

It looks sleeker and more European 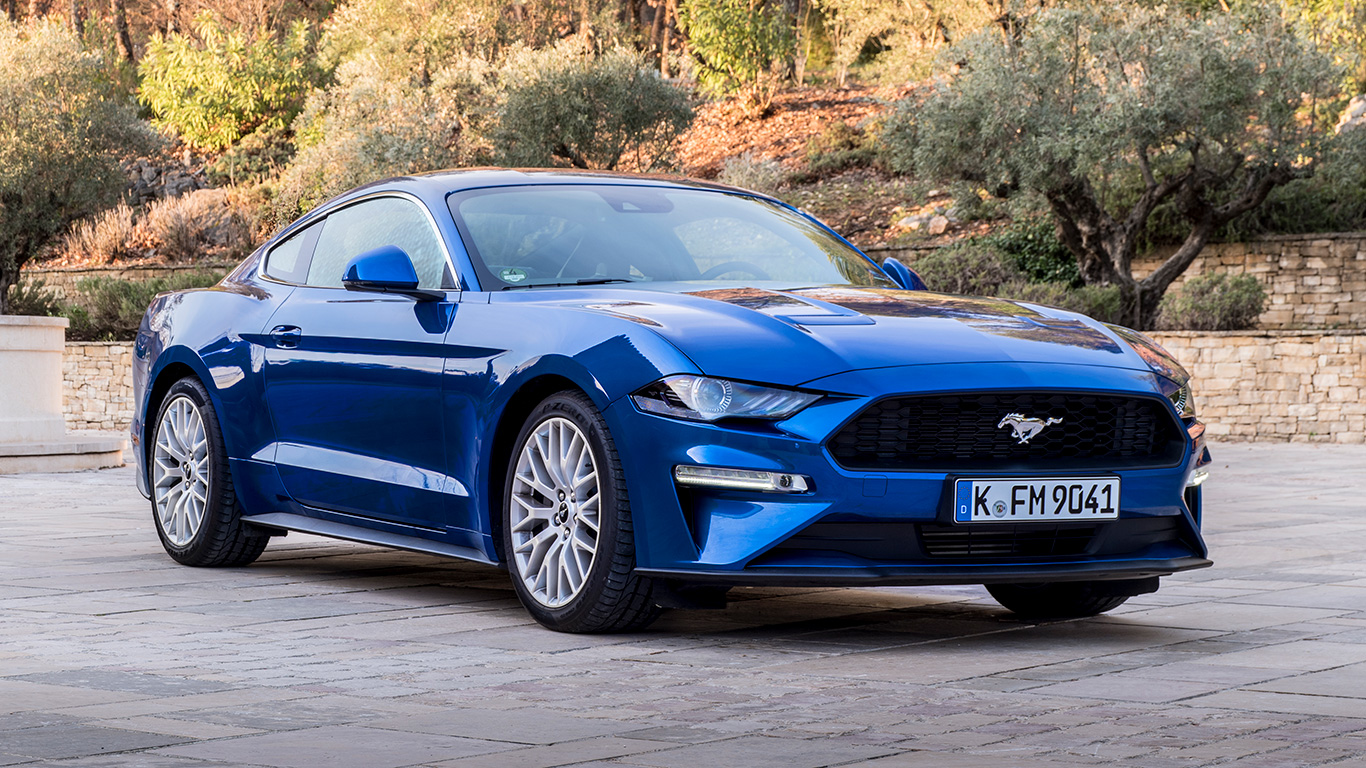 Ford waited five decades before bringing the Mustang to the UK, forcing Brits to make do with the Capri, Probe and Cougar until 2014. Now, this all-American icon has been facelifted, and it looks – dare we say it? – ever-so-slightly European.

There are sleeker, all-LED headlamps and tail lights, a reshaped front bumper and splitter, extra vents in the bonnet and an optional ducktail rear spoiler. The underbody aero has been tweaked, too (not that you can see it).

The overall effect is a little less muscle car, a little more curvaceous coupe. But if all that sounds too subtle and sophisticated, the new Orange Fury paint colour adds some good ol’ fashioned attitude.

The V8 has extra grunt – and more rumble 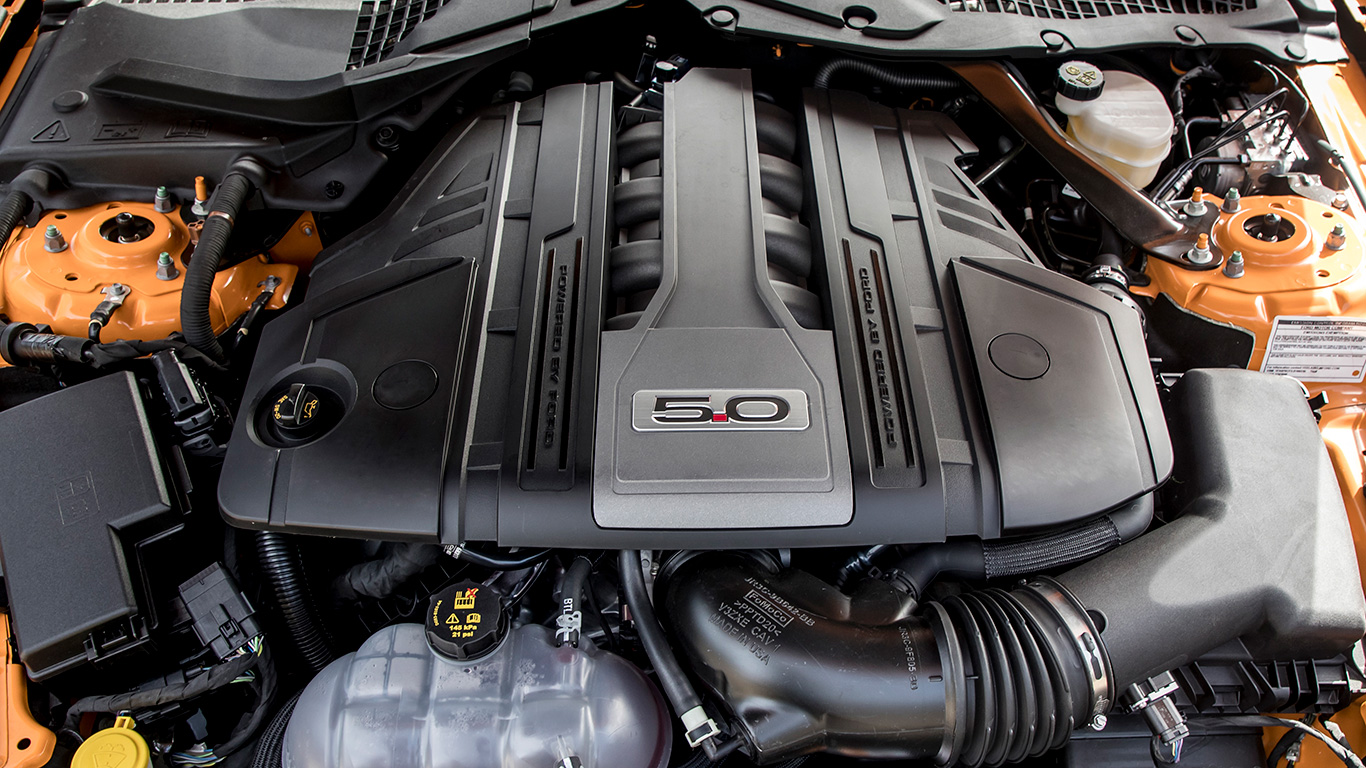 Offered the keys to the Ecoboost or V8, we plump for the latter. Who wouldn’t? I challenge anyone with even a drop of petrol in their veins to fire up that five-point-oh without uttering an involuntary ‘ooof’. It sounds fantastic: a thudding rumble that swells to a deep-chested roar.

A new Active Valve Performance Exhaust adds even more noise if you want it (and you do). Simply select Race Track or Drag Strip modes and the tailpipe baffles open, cranking the volume up to 11. Alternatively, a ‘Good Neighbour’ mode allows you to muffle the thunder at pre-programmed times of day, for example when you leave for work each morning.

The latest V8 has a little more power (up to 450hp) and a higher rev limit. And this naturally-aspirated lump isn’t reluctant to rev. With 390lb ft of torque, you don’t need to work it hard – but there’s visceral pleasure to be found in doing so. Zero to 62mph takes 4.6 seconds in the manual coupe, and just 4.3 seconds with the 10-speed auto.

The EcoBoost version is better to drive 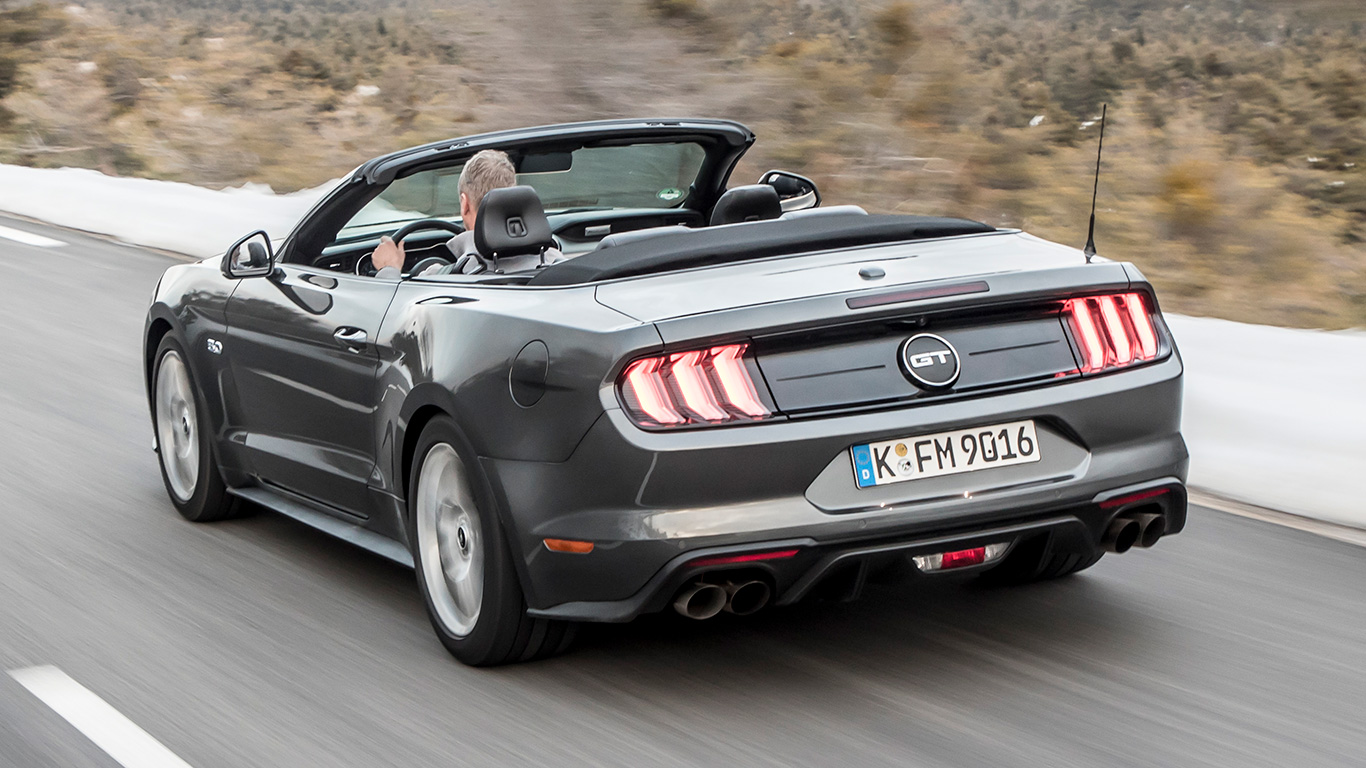 The 2.3-litre Ecoboost is always going to feel a tad underwhelming after the V8. Especially when you discover it’s lost 27hp for 2018 (now 290hp) although the quoted 0-62mph time stays the same: 5.8 seconds for the manual, 5.5 seconds for the auto.

However, let’s not forget this same engine is already used to stonking effect in the Focus RS. And it weighs fully 90kg less than the V8, all of which is subtracted from the nose of the car. You feel that difference on the road – not least the Route Napoleon – through keener turn-in and better balance.

You’ll also appreciate the superior fuel economy of the four-pot, of course. The official figure is 31.4mpg for the manual coupe, versus 22.8mpg for the V8.

New MagneRide dampers are a must-have 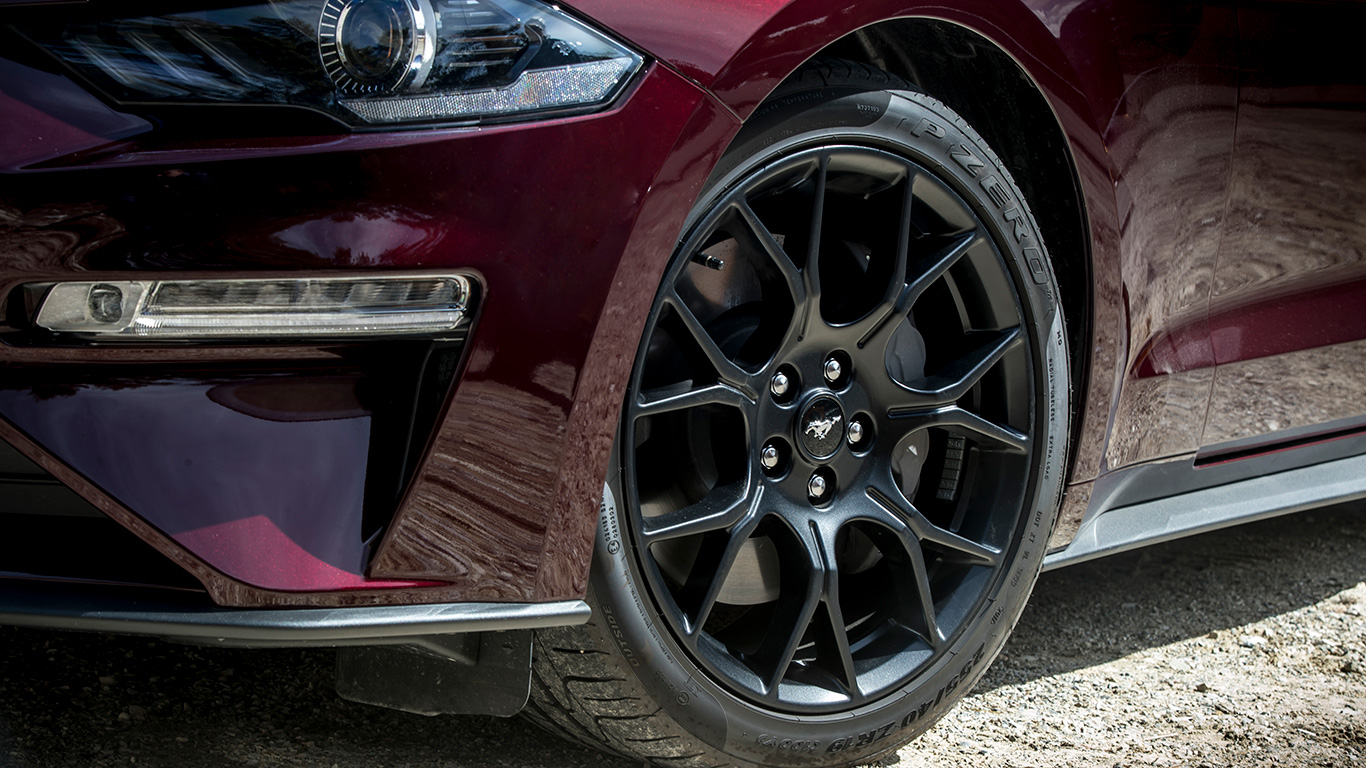 To prove the Mustang isn’t simply about straight-line speed, Ford has introduced Magneride dampers as a £1,600 option. Filled with a special fluid that reacts to electrical current, they can stiffen or soften according to the road conditions – adjusting up to 1,000 times a second.

In truth, they’re not the magic bullet that transforms the Mustang into a B-road hero. It’s still a wide, heavy car (up to 1,818kg for the V8 convertible) and it can’t defy physics. On these snaking switchbacks in the foothills of the Alps, a Fiesta ST would be more fun.

Nonetheless, this particular fast Ford is still engaging and exciting, and the Magneride dampers serve up a supple ride with added cornering control. I reckon they’re money well-spent.

Safety gets a much-needed boost 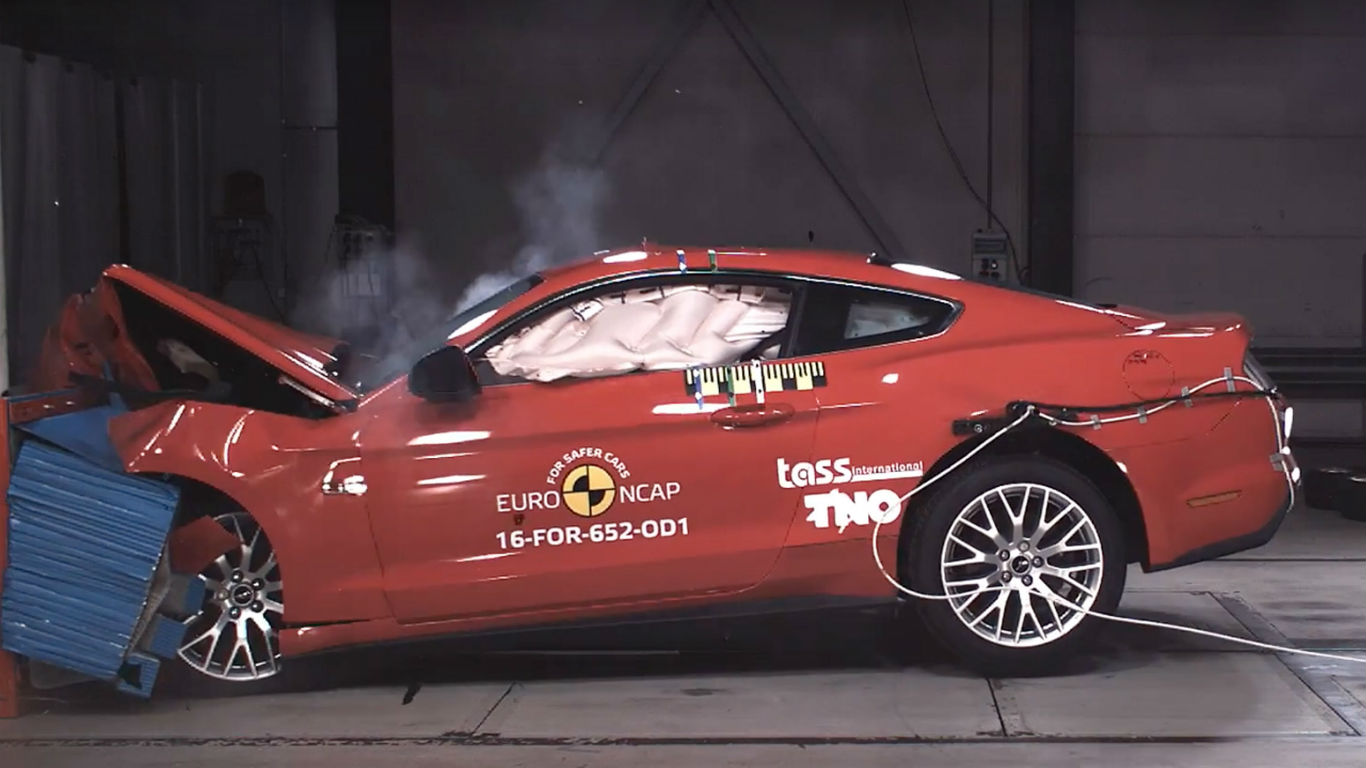 The elephant in the room at the Mustang launch was that Euro NCAP result. Last year, the car safety watchdog put the Mustang through its industry-standard crash test and it scored a woeful two stars out of five. Notable issues were a lack of driver assistance tech and poor protection for rear passengers.

The new car hasn’t been tested yet, but Ford is confident of a better result, saying “sophisticated technologies will contribute to an improved Euro NCAP rating”. Those technologies – fitted as standard – include active emergency braking with pedestrian detection, lane-keeping assist (which nudges the steering to keep you between the white lines) and adaptive cruise control (maintains a set distance to the car in front).

The interior is still a mixed bag 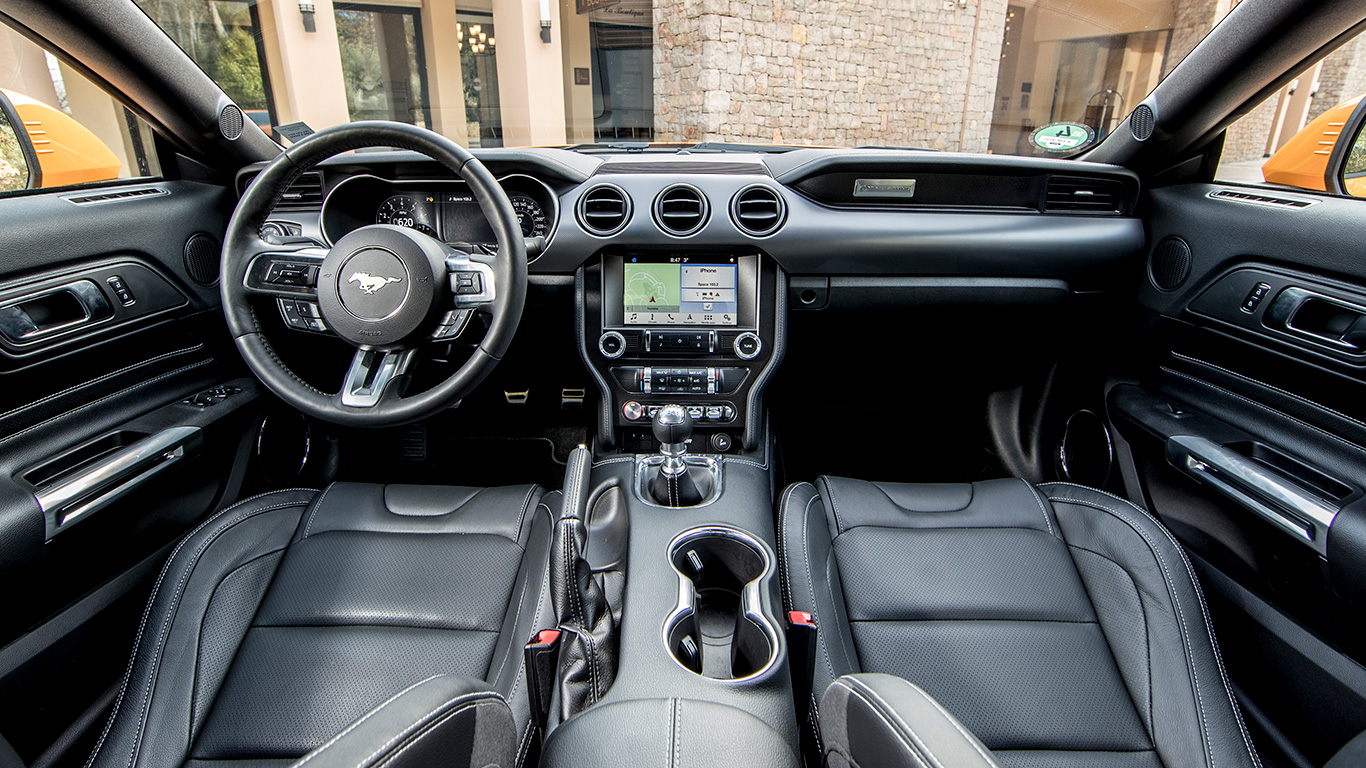 After that upmarket exterior makeover, the Mustang’s cabin remains a mild disappointment. Here, in budget switchgear and hard, shiny plastics, is where the gap to ‘premium’ rivals really shows. But then there’s also a hefty price-gap between, say, a £41,095 Mustang V8 and a £60,425 BMW M4, so a compromise must be made.

The chief upgrade for the interior is a new TFT digital instrument cluster instead of physical dials. It’s cluttered, but looks cool. Switch to Sport or Track modes and the rev counter becomes a horizontal bar that stretches across the top of the screen, while you can also choose from hundreds of colour combinations. After a much debate, my co-driver and I settled for fluoro-green and purple…

Drag Strip Mode… that is all 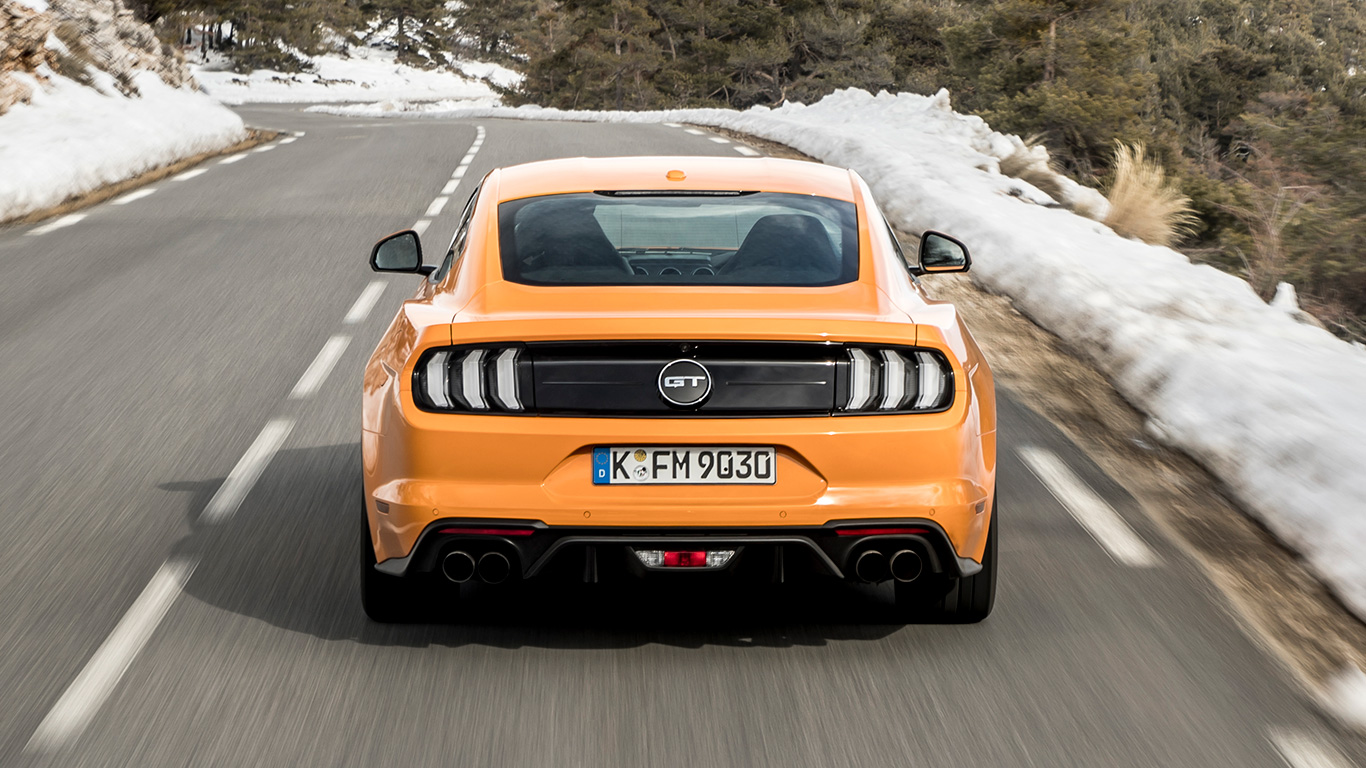 Where the Mustang previously had four drive modes, it now has six – including the customisable My Mode. New for 2018 is Drag Strip mode, which optimises the car for quarter-mile performance “at dedicated drag racing strips” by using Launch Control and softening the rear Magneride dampers for maximum standing-start traction.

I tried it, to hilarious effect. And judging by the number of black rubber ‘elevens’ on the Route Napoleon, several of my colleagues did, too. 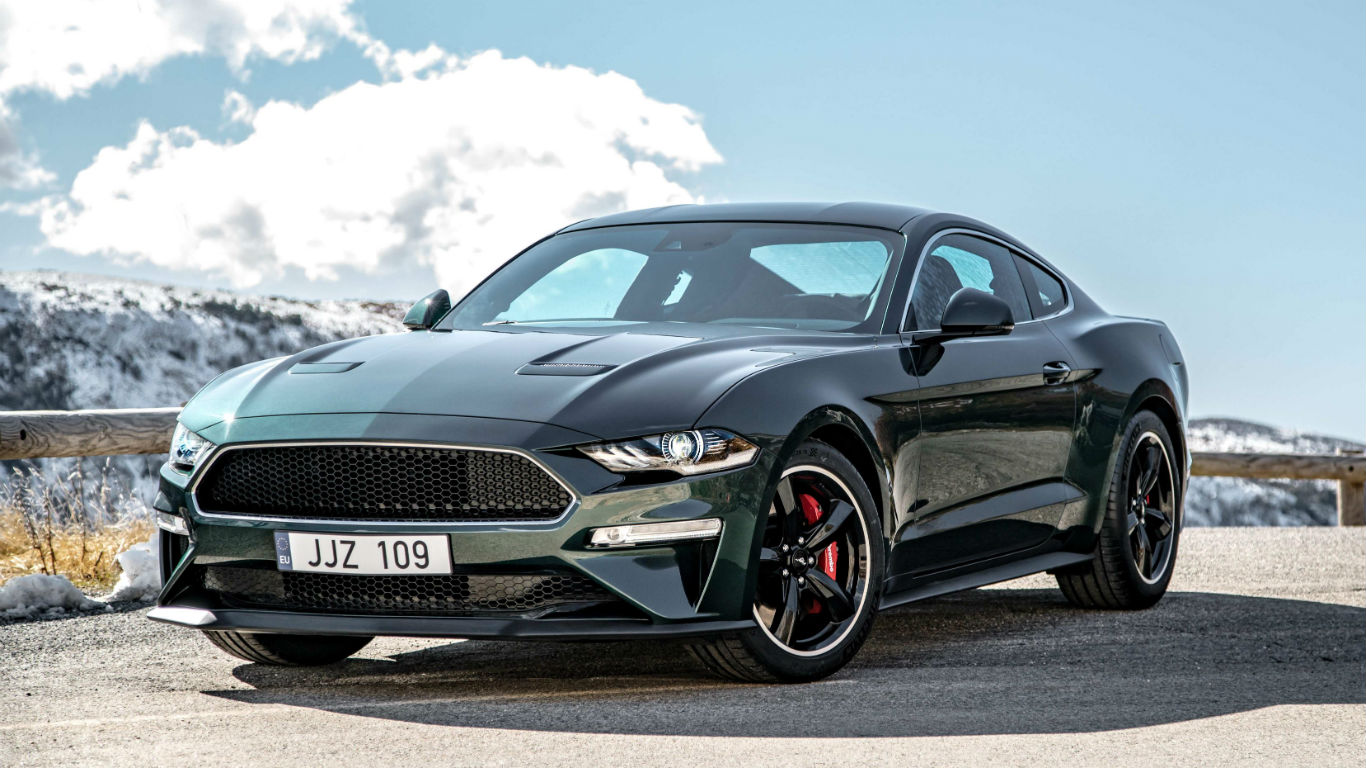 For true Mustang aficionados, the forthcoming Bullitt special edition is the one to have. Loosely based on the car driven by Steve McQueen in the 1968 film of the same name, it’s available in Dark Highland Green or Shadow Black.

The Bullitt’s V8 gets a mild power boost to 464hp, but it’s main appeal is cosmetic. As the star of one of Hollywood’s most celebrated car chases – out-running a Dodge Charger on the streets of San Francisco – it’s next-level cool. 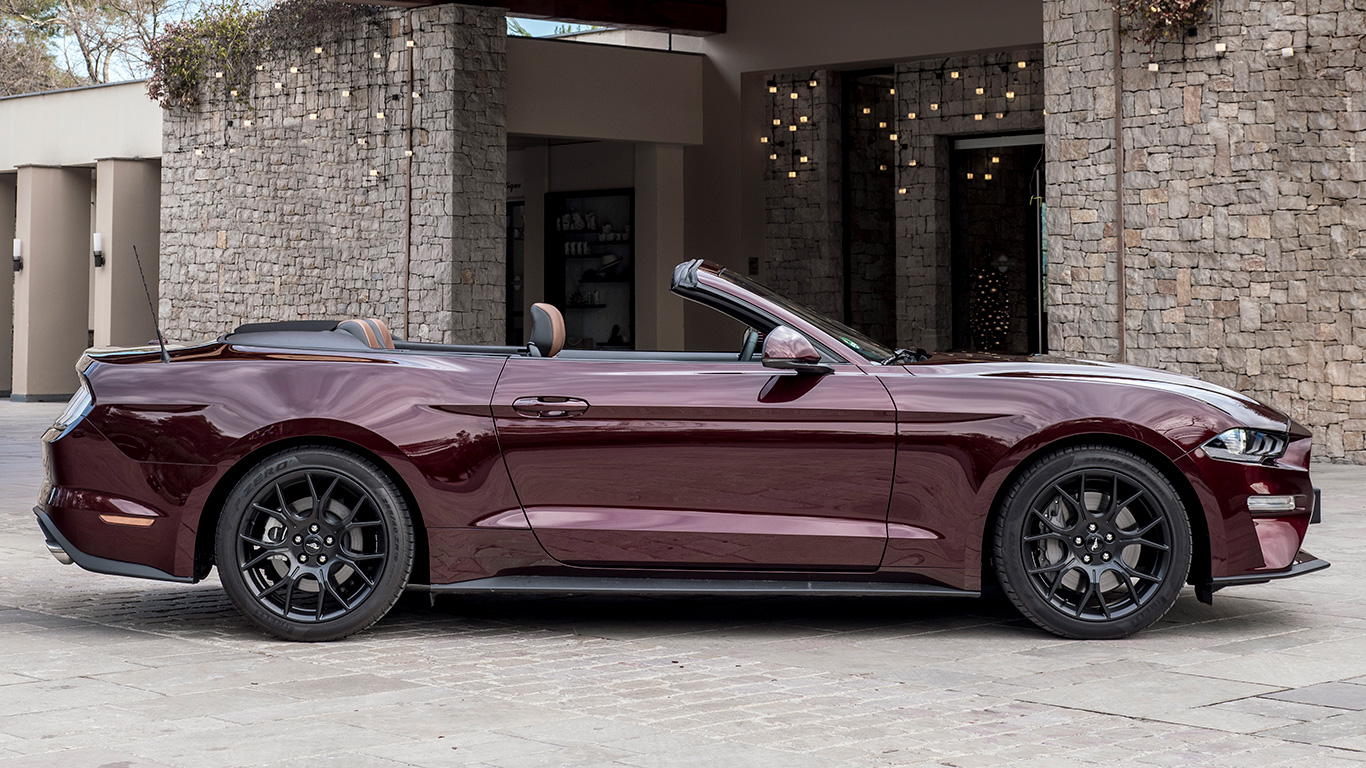 Americans can still buy a Dodge Charger, or indeed a Chevrolet Camaro. If you want an official, right-hand-drive muscle car in the UK, though, the Mustang is still your only option. You can draw comparisons with the BMW M4 and Mercedes-AMG C63, but such cars are altogether different. Think steak and chips versus a Michelin-starred meal.

The thing is, I really like steak and chips. And I really like the Mustang. It’s far from perfect – and it’s still not a sports car in the European sense – but the latest updates enhance its back-to-basics appeal. I’ll have a V8 coupe in Orange Fury with a manual ’box, please. Yeee-ha.