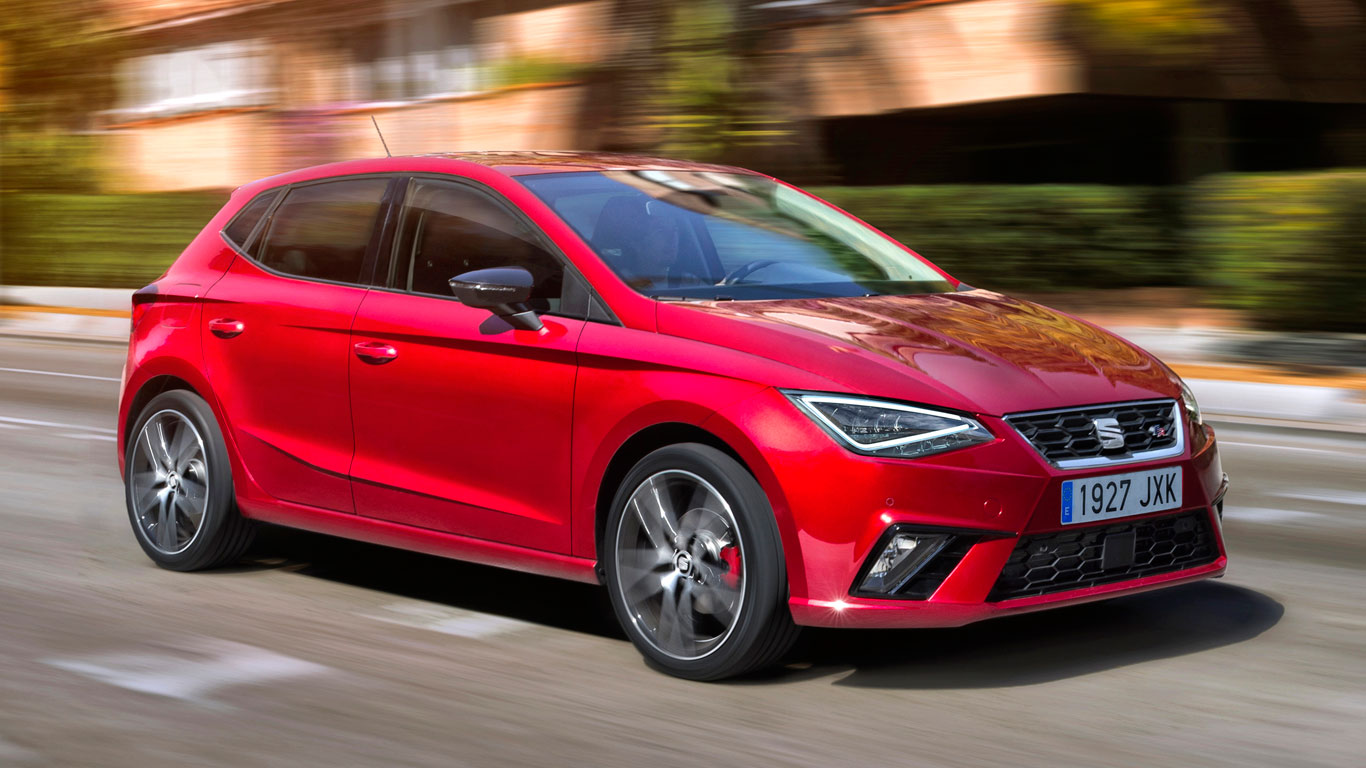 Volkswagen’s Spanish arm is on fire at the moment. Not literally, à la Vauxhall – that would be another scandal VW Group could do without – but sales are storming. Nearly 410,000 SEATs were sold worldwide last year, while here in the UK March 2017 registrations were up by nearly a third compared to 2016.

A large chunk of that success can be put down to the new Ateca crossover – something SEAT has needed in its range for, well, about as long as the Nissan Qashqai has been around. Another, smaller crossover is set to arrive in the form of the Ibiza-based Arona later in the year, and a bigger SUV in 2018.

In the meantime, the uber important Ibiza supermini has been given a substantial refresh for 2017. 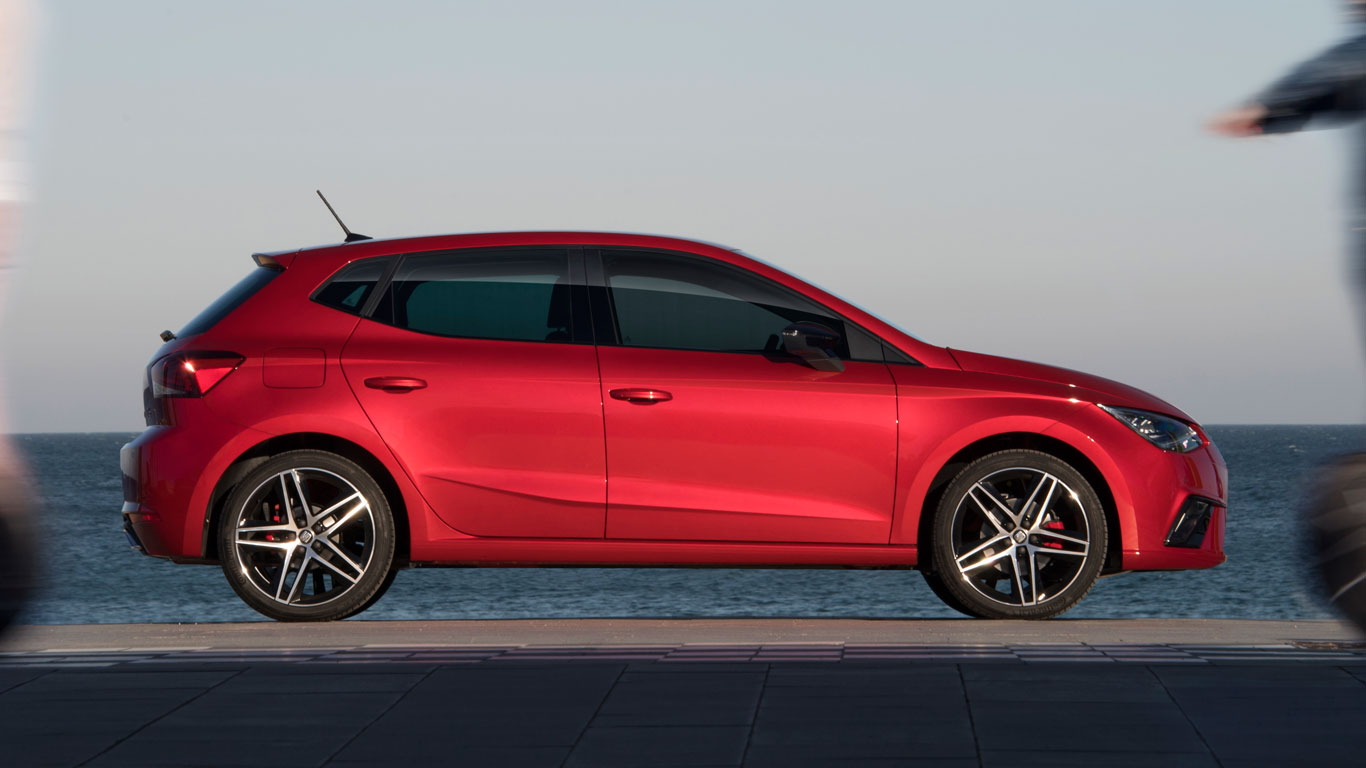 We say ‘substantial refresh’, but that’s rather playing it down somewhat. The new Ibiza is based on VW Group’s new MQB A0 platform – meaning it’s 87mm wider yet 2mm shorter than before. As the first in the Group’s range to use the platform (ahead of the new Arona and Audi’s A1), it’s a clear indication how serious SEAT is about its aim to make the Ibiza “the best small car in Europe.”

It looks more Leon-like than ever before, with an undeniably familiar ‘face’ and a longer wheelbase than previously. There’s no three-door or estate version available – SEAT is concentrating on its crossover models, which’ll appeal to both the fashion-conscious and those seeking practicality.

The interior is a clear step up over the outgoing Ibiza. From the pleasing ‘thunk’ as you close the door, to the premium materials used throughout the cabin, this feels like an upmarket VW Group product that belies its SEAT badge. The car’s wider dimensions along with stretched wheelbase means there’s a good feeling of space within the Ibiza, aided by large windows which help visibility. 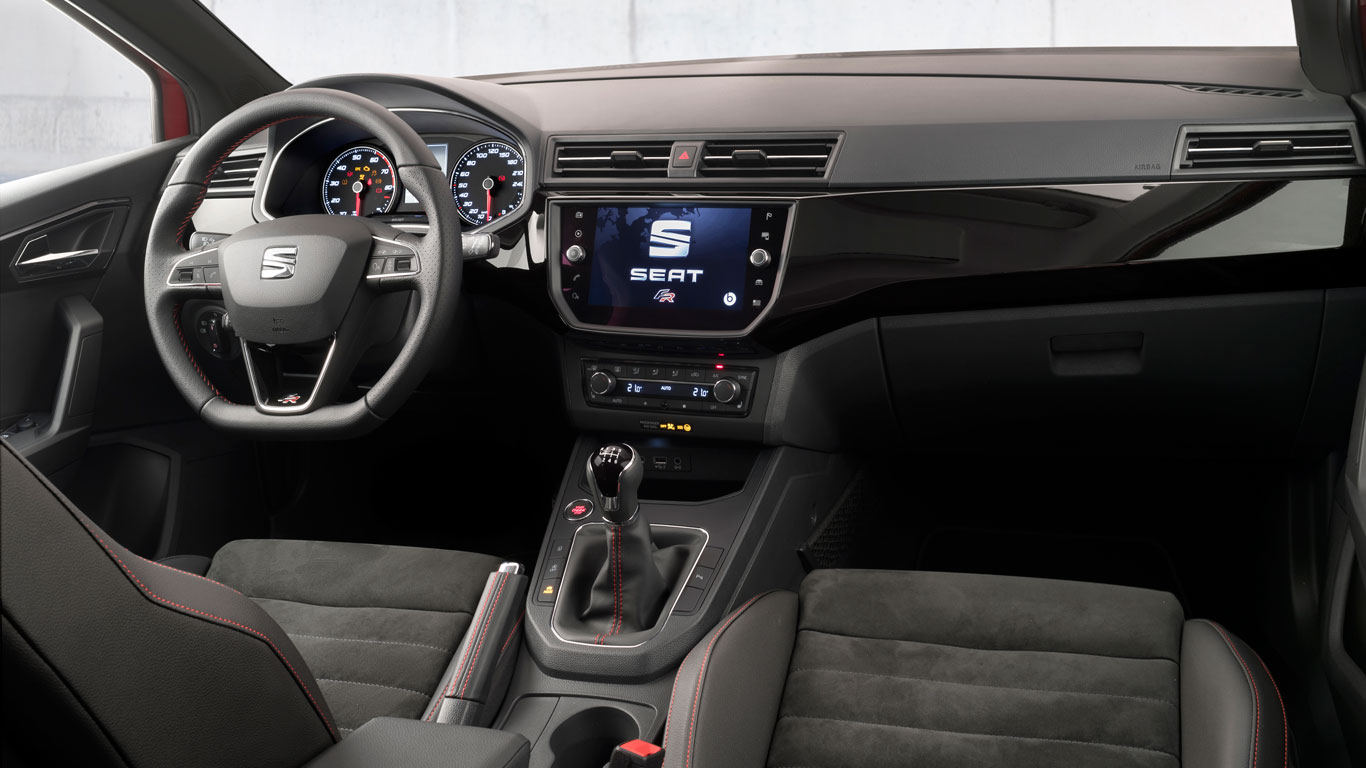 SEAT says connectivity is a huge focus for the brand over the coming years, and as the Ibiza generally attracts an average buyer 10 years younger than those of other superminis, it’s important that the Ibiza offers the latest in infotainment. The majority of buyers are expected to opt for the mid-range SE Technology, and all models from this up feature an 8.0-inch infotainment system at the centre of the dash.

This is intuitive to use, with menus easy to navigate and the satellite-navigation system clear to understand. Like the previous model, the latest Ibiza features SEAT’s clever three-in-one Full Link capability, offering Apple CarPlay, Android Auto and MirrorLink. These features effectively mirror your mobile through the touchscreen system, allowing you to use your phone’s navigation software and access calls and music. 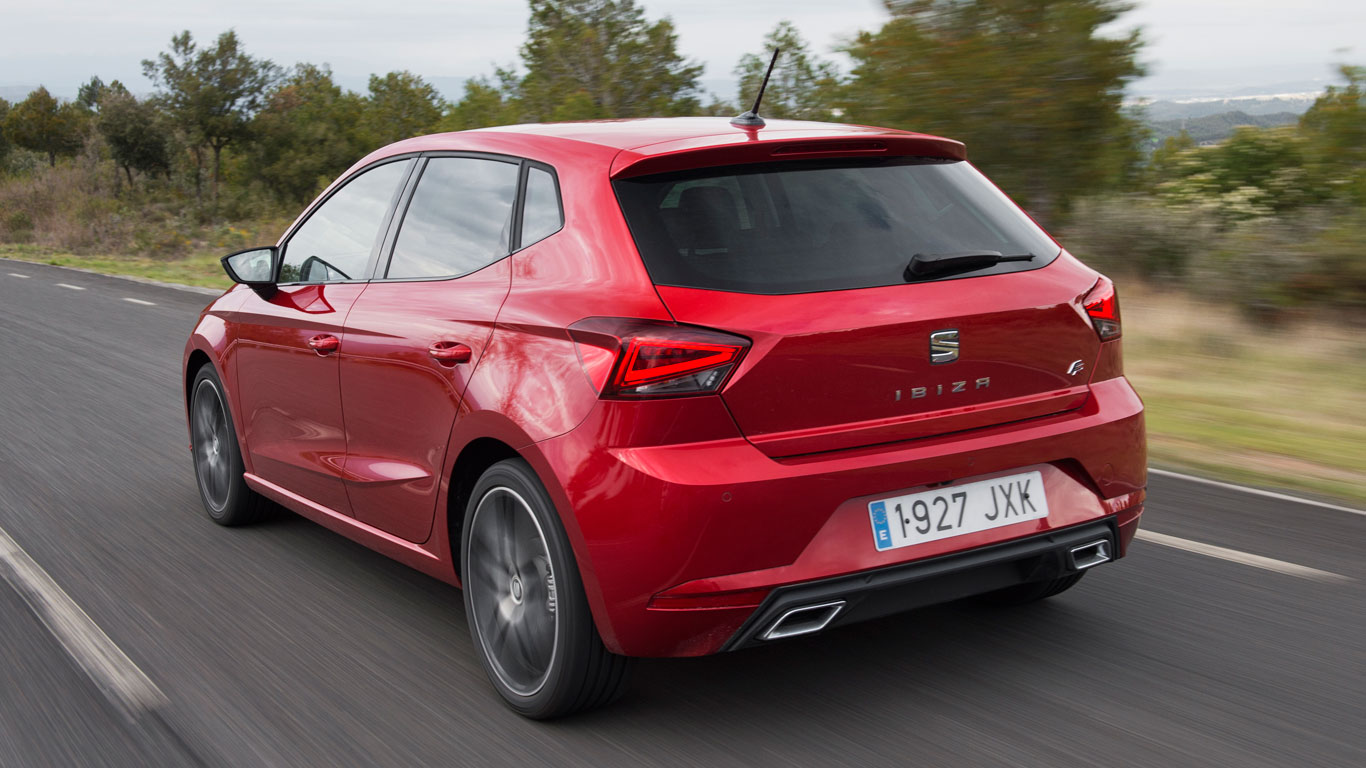 At launch, buyers get a choice of a naturally-aspirated three-cylinder 1.0-litre MPI petrol engine producing 75hp, and a 1.0-litre three-pot turbo with 95hp or 115hp. We tried the latter, which comes in sporty FR trim, adding lowered suspension, rear disc brakes and SEAT’s drive profile, which lets drivers flick between normal, sport, eco and individual modes.

In 115hp guise, the engine is a willing yet typically vocal unit. Not everyone likes the thrum of a three-cylinder engine, but it suits a car like this well and a six-speed ’box means it’s not too tiring at motorway speeds. Although flicking between the drive profiles supposedly tweaks a range of inputs including the steering, throttle response and even the dampers, the difference is hardly noticeable under day-to-day driving.

The standard 17-inch alloys on the Ibiza FR provide a firm but not uncomfortable ride – at least, not on the relatively smooth roads of Barcelona where our first drive took place. While the steering isn’t overly communicative, it’s direct and provides an assured drive. The manual gearbox – we haven’t tried the DSG auto – is pleasingly precise and tech such as front and rear parking sensors, a rear view camera and adaptive cruise control make the Ibiza easy to drive.

As well as the 1.0-litre, we’ve spent time with the 150hp four-cylinder 1.5-litre Ibiza, which is set to go on sale later in the year. The TSI petrol engine, which made its debut in the recently facelifted Volkswagen Golf, is as hot as you’ll be able to get in the Ibiza in the near future. It hits 62mph in 7.7 seconds and, while not electrifying, provides adequate thrills for those looking for something a bit more than the 1.0-litre.

A 1.6-litre turbodiesel will also be launched later in the UK, with 80 and 95hp power outputs. 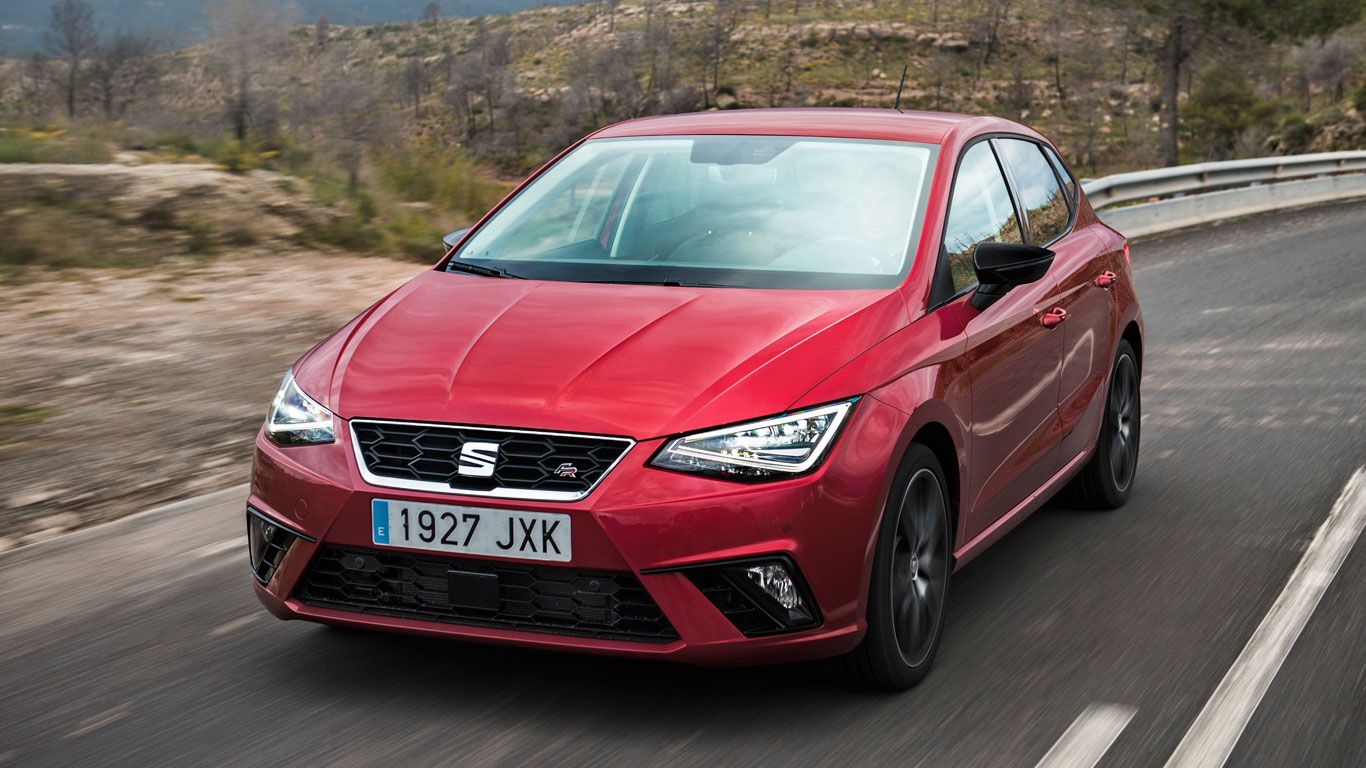 The supermini segment is extremely competitive, made up of old-time favourites such as the Ford Fiesta and Volkswagen Polo, along with recent new models in the form of the Nissan Micra and Citroen C3. We’ve yet to drive the Ibiza on UK roads to decide whether it’s truly class-leading, but it’s certainly up there with the best.

It really doesn’t feel like a budget VW Group model – indeed, you’d have to really want a Volkswagen badge to opt for the ancient Polo over an Ibiza. It looks great, in our opinion, while the interior is of high quality. Generous equipment levels means it represents good value for money, and keen drivers are well covered with the FR model.

We’d probably stick with the 1.0-litre, as the three-cylinder engine suits the car well and, in 115hp guise, will be quick enough for most drivers.

VW Group’s Spanish flame is set to burn brightly for a while yet, if the new Ibiza is anything to go by.