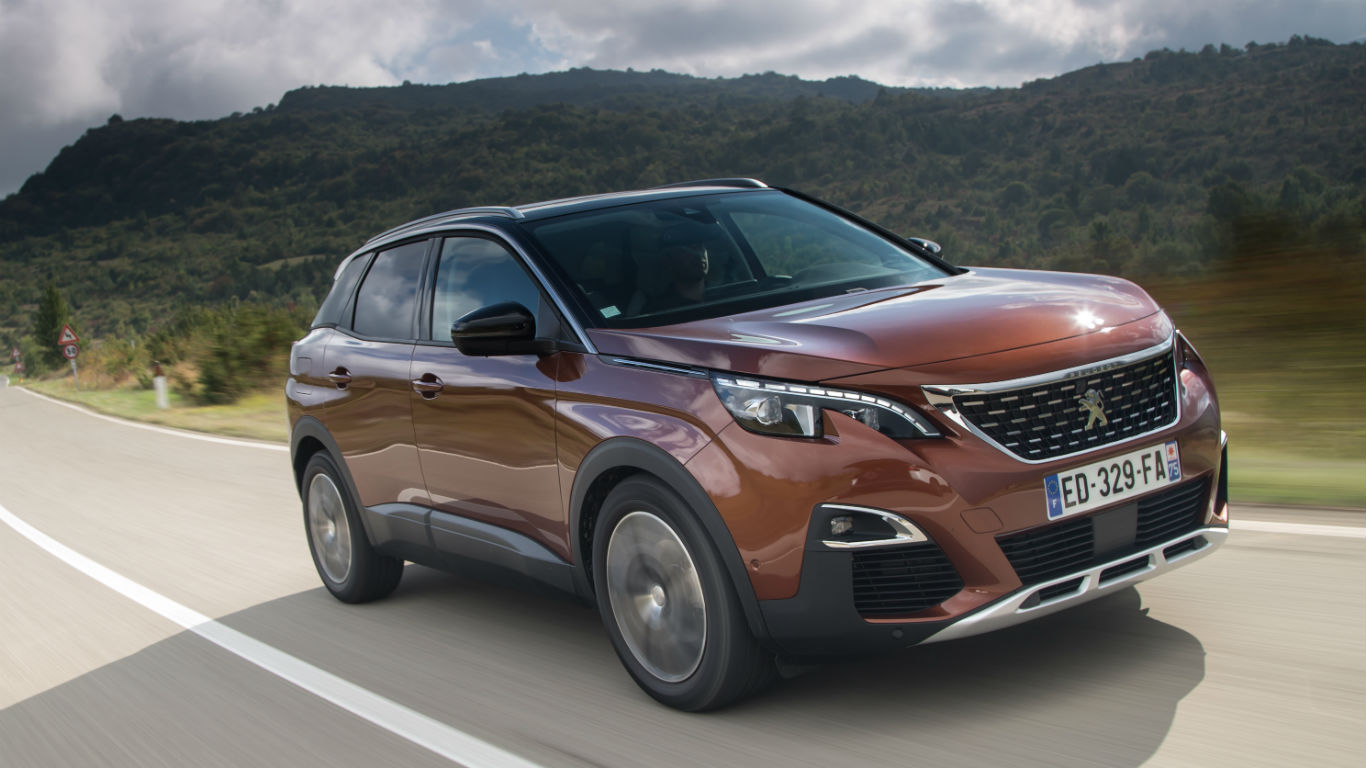 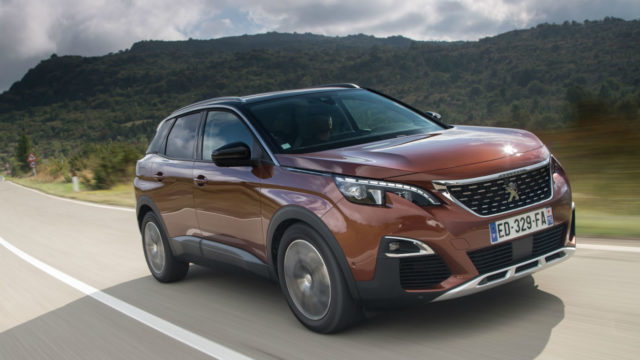 Not so long ago, people carriers were touted as the future of family cars. A ‘one box’ design, it was rightly argued, shoehorns the maximum amount of passengers and luggage into the available space. The problem, of course, is that functional isn’t fashionable. Nobody wants to drive a van with windows. 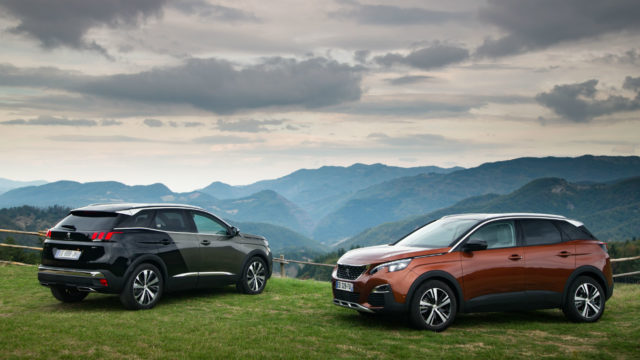 The French like a people carrier more than most, but they’re also dedicated followers of fashion. So Peugeot has reinvented its 3008 with more ground clearance and rugged styling. Yes, frumpy multi-purpose vehicle (MPV) has become funky sport-utility vehicle (SUV). With sales of medium SUVs up by 150% in Europe since 2009, it’s hard to argue with that logic. We travelled to Bologna to see if Peugeot’s sector-switching gamble has paid off. 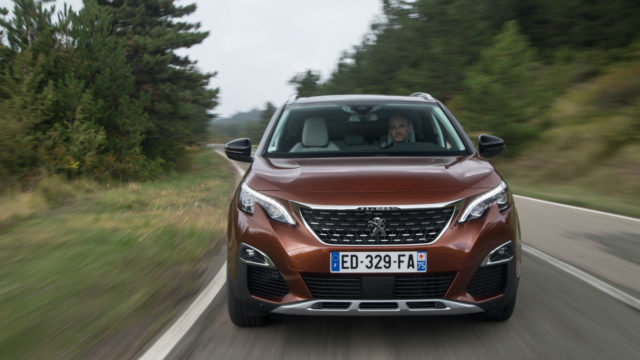 First a few facts, though. Peugeot won’t reveal full UK prices until November, but we’re told the 3008 will start from £21,795 when it hits showrooms in January 2017. There’s a choice of two petrol engines and four diesels, plus six-speed manual or automatic gearboxes. Its rivals include the Nissan Qashqai, Renault Kadjar, SEAT Ateca and Volkswagen Tiguan. 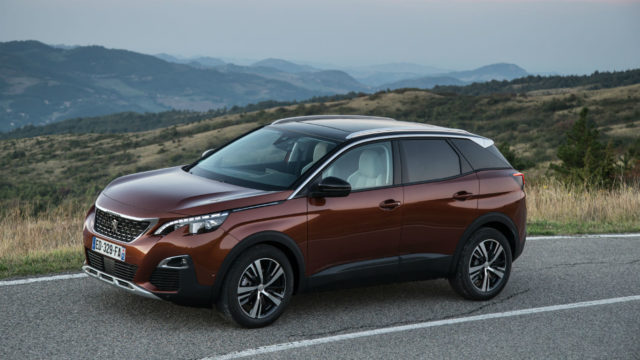 All gaping grille and bloated body, the old 3008 looked like the sort of bottom-feeding sea creature only David Attenborough could love. The new car is more Mr Muscle than Mr Blobby, with chiselled lines and a squat stance. At the front, hawkish headlights taper towards a jutting jaw, while the rear features a kicked-up waistline and a ‘floating’ roof à la Range Rover Evoque. It’s brave rather than beautiful, but divisive looks haven’t done the Nissan Juke any harm. 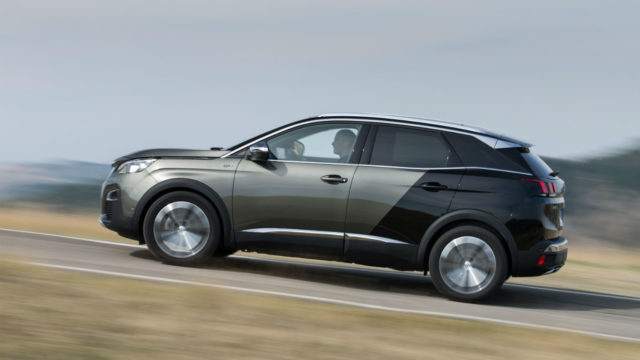 Peugeot describes the 3008 as “potentially the most trendy SUV currently on the market”. And, putting aside the fact that nobody other than our nan uses the word ‘trendy’, the team from Vélizy has done a decent job. Style matters in this sector – it’s the main reason we aren’t all buying MPVs, after all – and 3008 has showroom appeal in spades. Choose copper or grey and you can even opt for two-tone ‘Coupe Franche’ paint seen here, previously only available on 208 and 308 GTIs. However, it’s the 3008’s interior that really sets it apart. 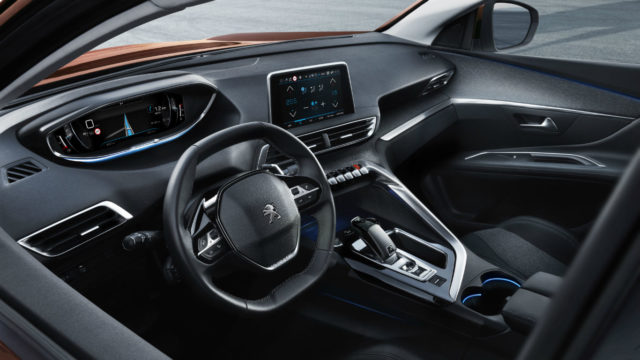 You’ll probably familiar with Peugeot’s i-Cockpit by now. In essence, it consists of a small steering wheel and a high-set instrument binnacle – the idea being that you view the dials over the top of the wheel, rather than through it. The 3008 takes the concept a stage further with a squared-off wheel (part-Playstation, part-Austin Allegro), plus a fully digital display not unlike Audi’s Virtual Cockpit. 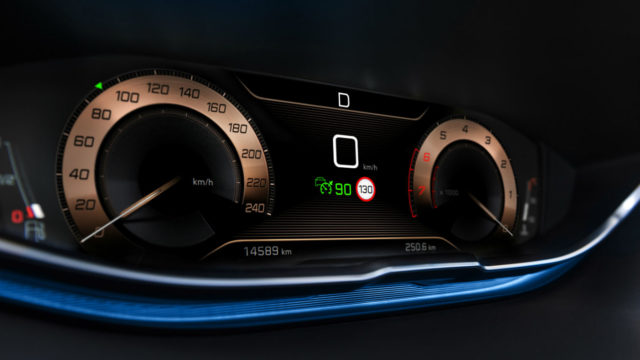 The 12.3-inch instrument panel has a choice of modes, from traditional dials to 3D navigation view. Unlike the Audi system, you can’t opt for a full-width map or the pièce de resistance Google Earth display. But while the Germans charge £1,600 for Virtual Cockpit on a new Q2, the i-Cockpit is standard across the 3008 range. It all looks suitably snazzy, although we rather liked the ‘Minimum’ view for distraction-free driving at night. 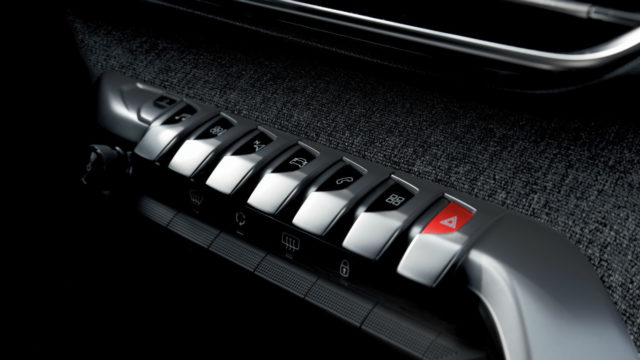 There’s also an eight-inch touchscreen atop the dashboard for infotainment, but thankfully Peugeot hasn’t ‘done a Renault’ and switched to a completely screen-based setup. A set of elegant ‘piano keys’ adorns the swoopy centre console, allowing quick access to major functions. The overall ambiance is stylish, futuristic and more than a little premium, particularly with the Amplify reactive mood lighting of higher-spec models. Volkswagen should be worried.

Run to the hills 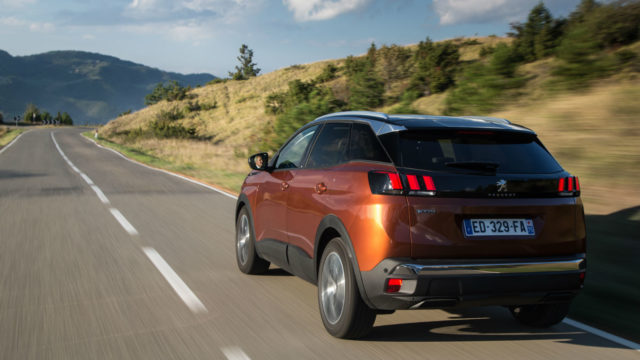 We escape Bologna airport and head for the Autostrada. Our destination: the hills of Emilia Romagna – part of the original Mille Miglia race route and spiritual home of the supercar. No pressure, then.

Cruising at motorway speeds gives us time to appreciate the Peugeot’s impressive refinement and comfortable driving position. We heard one shorter driver complain of the steering wheel obscuring the dials (a relatively common issue with i-Cockpit), but our 5ft 8in frame fitted fine. A case of try before you buy, perhaps. 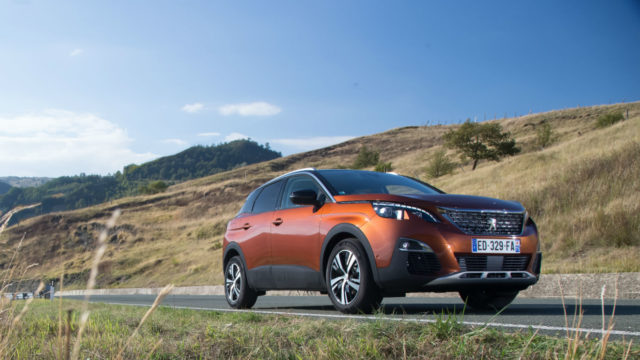 Exiting onto minor roads peppered with potholes and Pandas (the Fiat variety), it also became clear how nicely the 3008 rides. Peugeot doesn’t make claims about sporty handling: the emphasis here is on good ol’ fashioned comfort – and there’s nowt wrong with that. Even on the 19-inch alloys of the top-spec GT, the 3008 feels as absorbent as a roll of quilted Andrex. 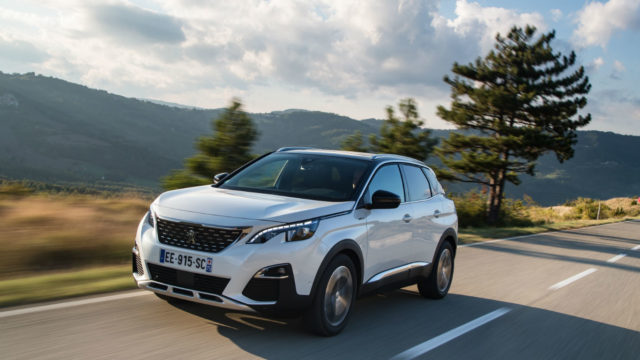 The pay-off is a car that doesn’t quite do the Mille Miglia course justice. Still, what did you expect? The 3008 is pleasant to drive – the equal of a Nissan Qashqai – but this was never going to be one you’d get up early on Sunday for. Plus points include predictable handling and a lack of body-roll. On the minus side, the steering feels somewhat artificial and the automatic gearbox can be indecisive when ‘making progress’. Better to slow down and take in the Tuscan scenery, we thought. 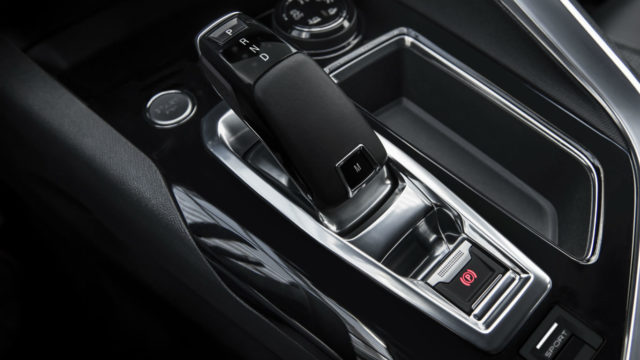 Interestingly, a Peugeot engineer told us they “haven’t ruled out” a 3008 GTI. But for the now the quickest versions are the 180hp diesel and 165hp petrol, both of which hit 62mph in 8.9 seconds. 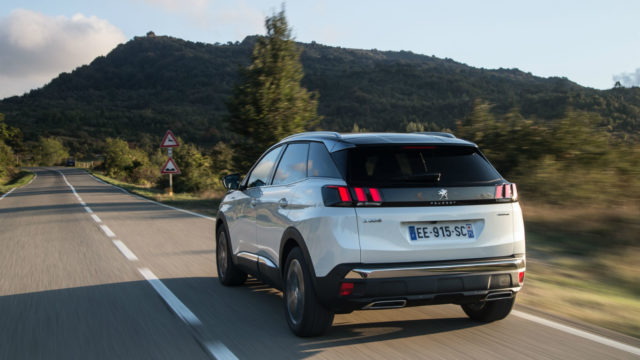 We start our drive in the flagship 2.0 diesel, before swapping into the 120hp 1.6 (the latter likely to be the UK bestseller). The bigger engine is appreciably quieter, not least because it doesn’t need to be worked as hard, but both offer sufficient mid-range punch for safe overtaking. Battered, heavily-laden Pandas were dispatched with a swift flex of the right ankle.

We also tried the 165hp petrol, which is smooth but less suited to the 3008’s laid-back character. Maximum power arrives at 6,000rpm, versus 3,500rpm in the diesel, so more ankle flexing is required. We’d follow the masses and go for the 120hp diesel.

The joy of specs 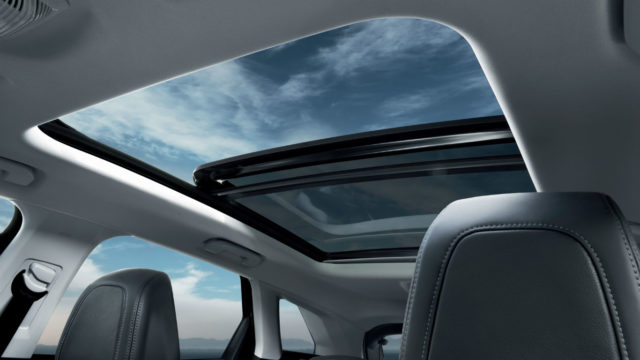 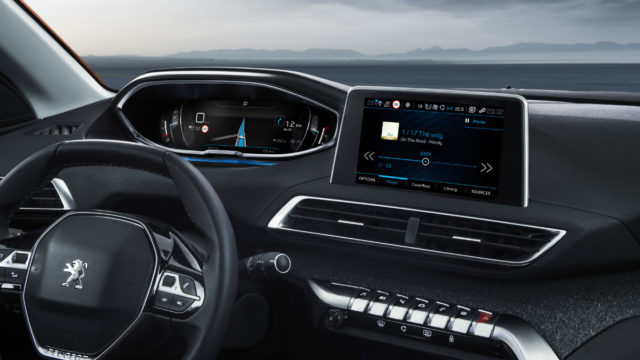 Peugeot expects half of UK buyers to choose Allure and, having sampled all versions apart from the basic Active, we’d again be inclined to follow the herd. It has all the safety kit you’d hope for in a family car (all 3008s have a five-star Euro NCAP safety rating) and its fabric-covered dashboard looks more contemporary than the wood or faux-carbonfibre found elsewhere.

If you must splash out on options, we thoroughly recommend Peugeot’s brilliant E-Kick electric scooter, which has a built-in charging dock in the boot of the car. It’s not cheap, at £1,100, but there are few more enjoyable ways whizz around an Italian hotel. Provided you don’t break both legs in the process, of course. 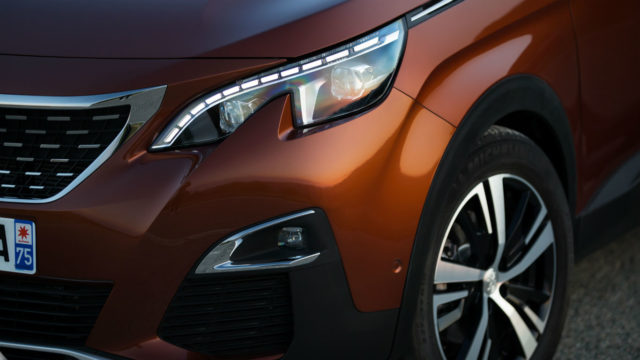 So, what about practicality? Has it been sacrificed on the altar of SUV style? Not entirely. The new 3008 doesn’t offer the seat-swivelling versatility of a good MPV, but there’s plenty of headroom (less so with the panoramic roof option) and front-seat occupants will be very comfortable. Those in the rear are less fortunate, with limited legroom for adults of above average height, plus a rather upright seat backrest that can’t be reclined. 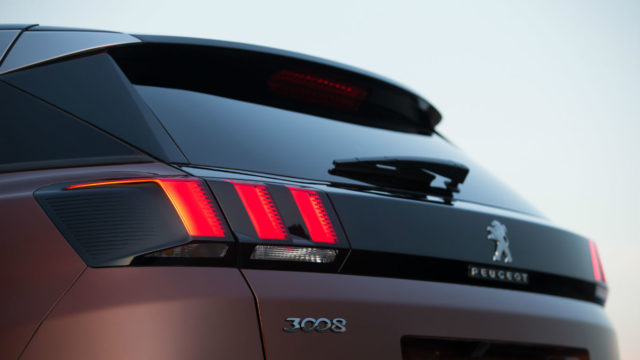 The square-shaped boot has a wide opening and enough space for a baby buggy or washing machine. The rear bench folds flat via quick-release levers, while the front passenger seat can also flip forward for lengthy loads. “Perfect for transporting a Christmas tree”, says Peugeot. GT Line and GT versions also have an extendable boot floor that slides out beyond the rear bumper to create a bench for a family picnic. If only we’d packed the wine and cheese. 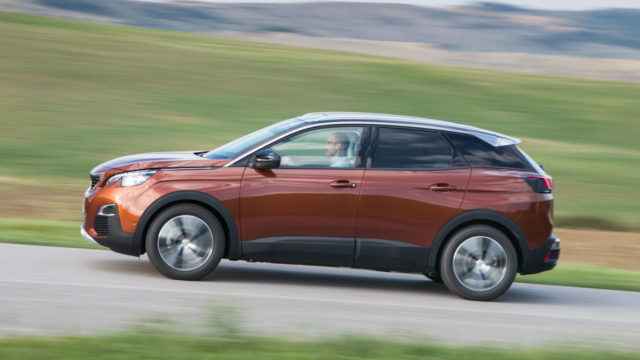 You may have noticed we’ve got this far into a 4×4 review with no mention of four-wheel drive. That’s because the 3008 doesn’t have it – not even as an option. As the car’s product manager pointed out, less than 2% of Qashqais sold in the UK have 4WD, so there simply isn’t the demand. What you can have instead is Grip Control, an optional driver-selectable system with Mud, Snow and Sand modes to optimise traction at the front wheels. It won’t get you up a rock-strewn glacier, but it might help you across a muddy field to that aforementioned family picnic. 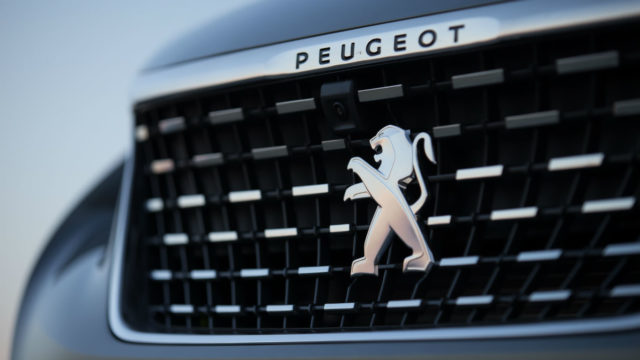 The 3008 competes in the crowded crossover class, where minds are changed by tax bands and small price differences. As such, Peugeot’s decision not to publish prices at launch isn’t particularly helpful. However, we expect the 3008 to score on standard equipment rather than headline-grabbing PCP deals.

Yet this is also a sector where hearts are won with great design – and herein lies the 3008’s USP. Its exterior styling divides opinion, but it can’t fail to grab your attention. And its interior really is quite special. Peugeot has finally delivered on its plan to ‘go premium’. 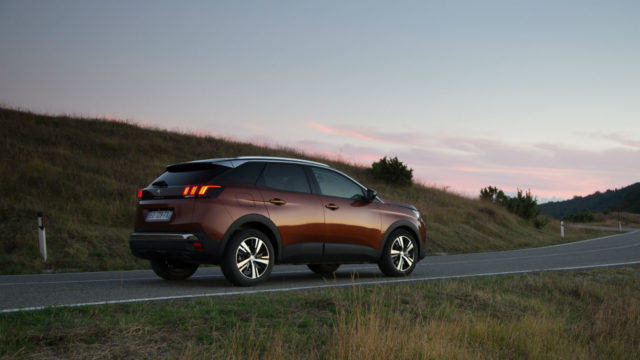 Ultimately, a so-so driving experience and slightly cramped rear seats prevent the 3008 from achieving a full five stars. But if you need more room, it’s worth noting that the closely-related 5008 SUV arrives in March, complete with seven seats and – so we’re told – even more space than the current 5008.

While Citroen returns to its quirky roots, Peugeot is pushing upmarket and embracing avant-garde design. On the evidence of the new 3008, its plan seems to be working. We’re not sure about the future of family cars, but the future for Peugeot looks promising.