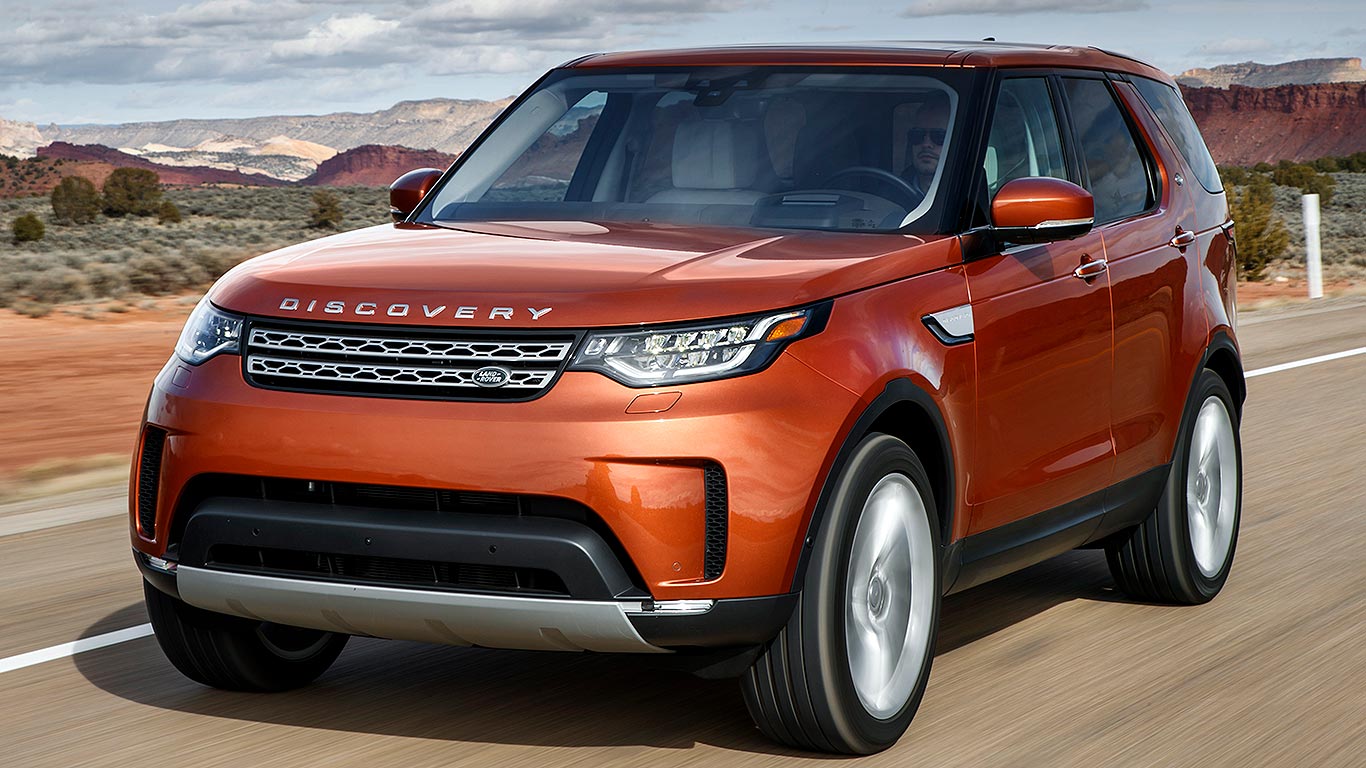 Meet the car set to be another smash-hit for Land Rover: the 2017 Discovery. Replacing the strikingly aged Discovery 4, this new Discovery (there’s no ‘5’ in the name) is an out-with-the-old reinvention.

It has a fancy new aluminium platform, which cuts almost half a tonne from the kerbweight. There’s more space than ever, and more off-road ability than ever. And most notably, sleek new styling that takes the Discovery into Range Rover territory. There’s a lot to discover.

What is the 2017 Land Rover Discovery?

Land Rover has comprehensively rethought the Discovery because it wants to take on the Audi Q7 and Volvo XC90: something the utilitarian Discovery 4 increasingly was unable to do. Customers want more premium machines in this sector, it says, proven by the big sales lift when the rugged Discovery 3 turned into the posher Discovery 4. This is, by some margin, an acceleration of that process.

So plenty has changed here, then?

Sit the new Discovery alongside the old one and they appear several generations apart, not one. Lego-brick look becomes swish and sleek. Your first impressions are not of Discovery, but of Range Rover. Not without basis, either – it’s now based on the same platform as a Range Rover.

What, so it’s basically a Range Rover underneath? 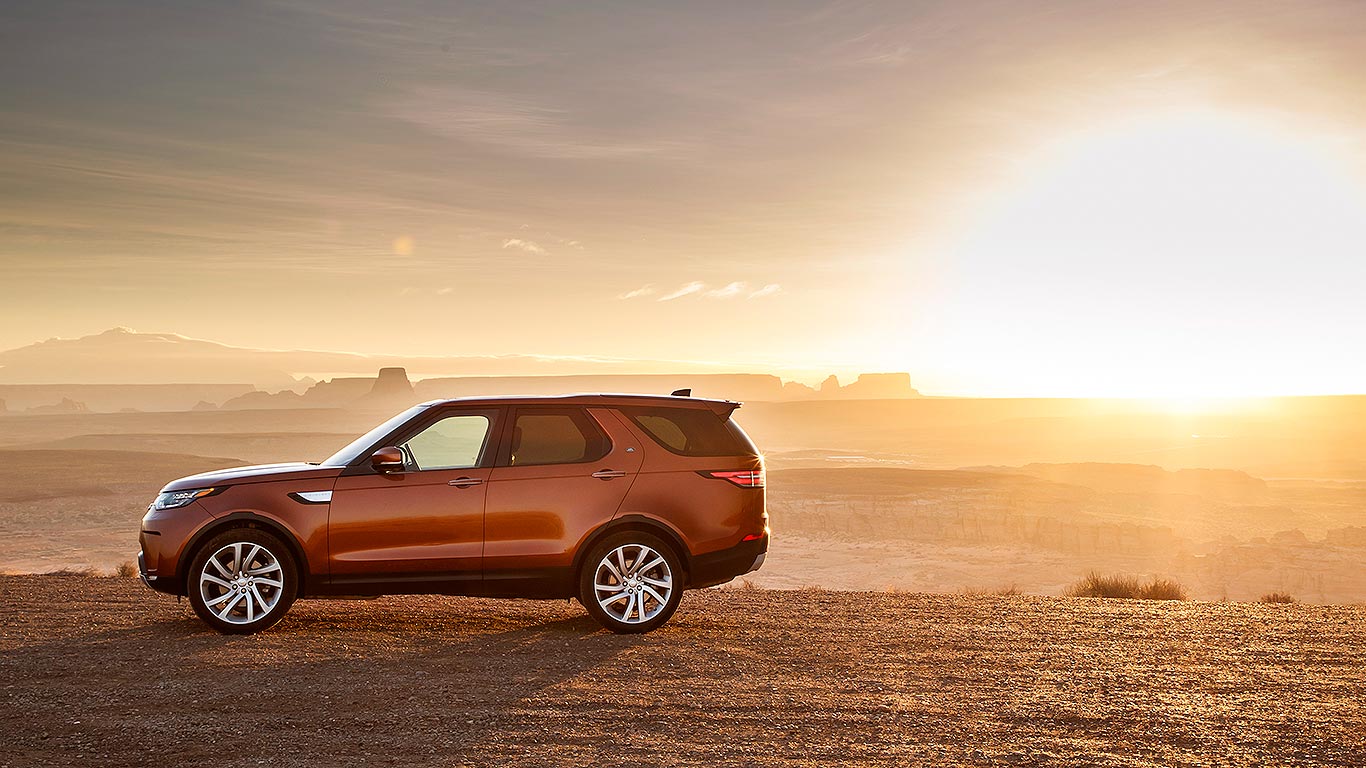 You bet. The same aluminium architecture used by the Range Rover and Range Rover Sport is now employed here. This is 480kg lighter, taking the Disco to just over 2.1 tonnes – 20% less than before. It’s a monocoque design, so should feel much tighter and sharper on road, but Land Rover insists off-road ability has been enhanced, not lost. All it lacks is the expensive anti-roll and dynamic handling tech of a Range Rover. That’s why you buy a Range Rover Sport, it says.

Uh-huh. This sounds like it could be expensive. Have prices rocketed?

This is the interesting bit. In run-out spec, the old Discovery cost from £47,500. Lead-in price for the new one is LOWER – from £43,495. This could be the story of the century, particularly when an Audi Q7 barely scrapes in under £50k. Well, partly. That basic Discovery is now a 2.0-litre turbodiesel; the V6 diesel costs from £50,995, level-pegging a Q7. Even so, this sophisticated new Disco is anything but wildly priced, perhaps explaining why Land Rover already has over 20,000 pre-orders for it.

What are your first impressions?

Time for a first look on the global model launch in Utah. And how the Discovery has evolved. Following the look of the Discovery Sport, it has a sleek nose, beautifully-profiled sides and strong, clean feature lines. It’s curvaceous where the old one was shed-like. Panel fit is super-precise, giving it a hewn-from-solid look. It’s rich and expensive-looking. Yes, it’s more Range Rover than ever.

But is it still an authentic Discovery? 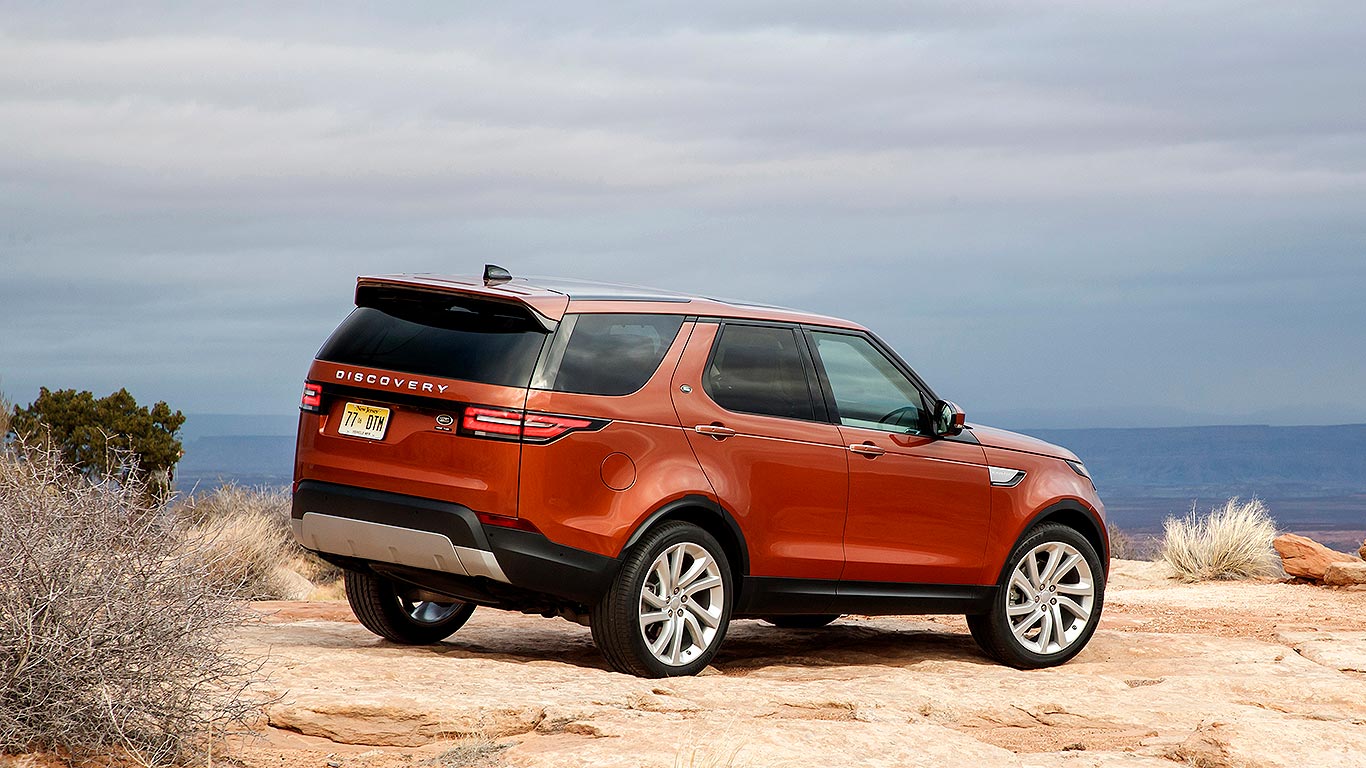 No, it’s not the blocky Discovery of yore. It was never going to be: that was a car 12 years old, says Discovery engineering chief Nick Collins. Everything has moved on and Land Rover was never going to make a retro Disco. There are Discovery cues, sure – the reverse-rake C-pillar, the step in the roof – but we’ll simply have to accept the Discovery is now a premium car like an Audi, not a rugged-look off-roader. Again, sales have proven this is exactly what customers want.

How does Land Rover define Discovery, then?

Land Rover argues the Discovery has never really been about being a pure, rugged 4×4. At launch in 1989, the genius of it was being a more car-like, an incredibly versatile family-friendly machine for those new to the brand – people scared off by the tough Defender or expensive Range Rover. This has perhaps been forgotten over the years as the car has aged, so the firm believes this one resets it and takes the Discovery back to what it originally set out to do – just with the flash, fancy finishes modern premium buyers expect.

Will you mistake it for a Range Rover?

You might do at first, before you get familiar with it. It looks posh and very modern, with lots of concept car cues. The tail lamps, horizontal instead of vertical, are lovely, while the headlights’ LED running lights look super-modern. The more we saw it, the more we thought it looks fantastic. But it’s Range Rovers you’ll be confusing it with, not old Discoverys. Same goes inside… 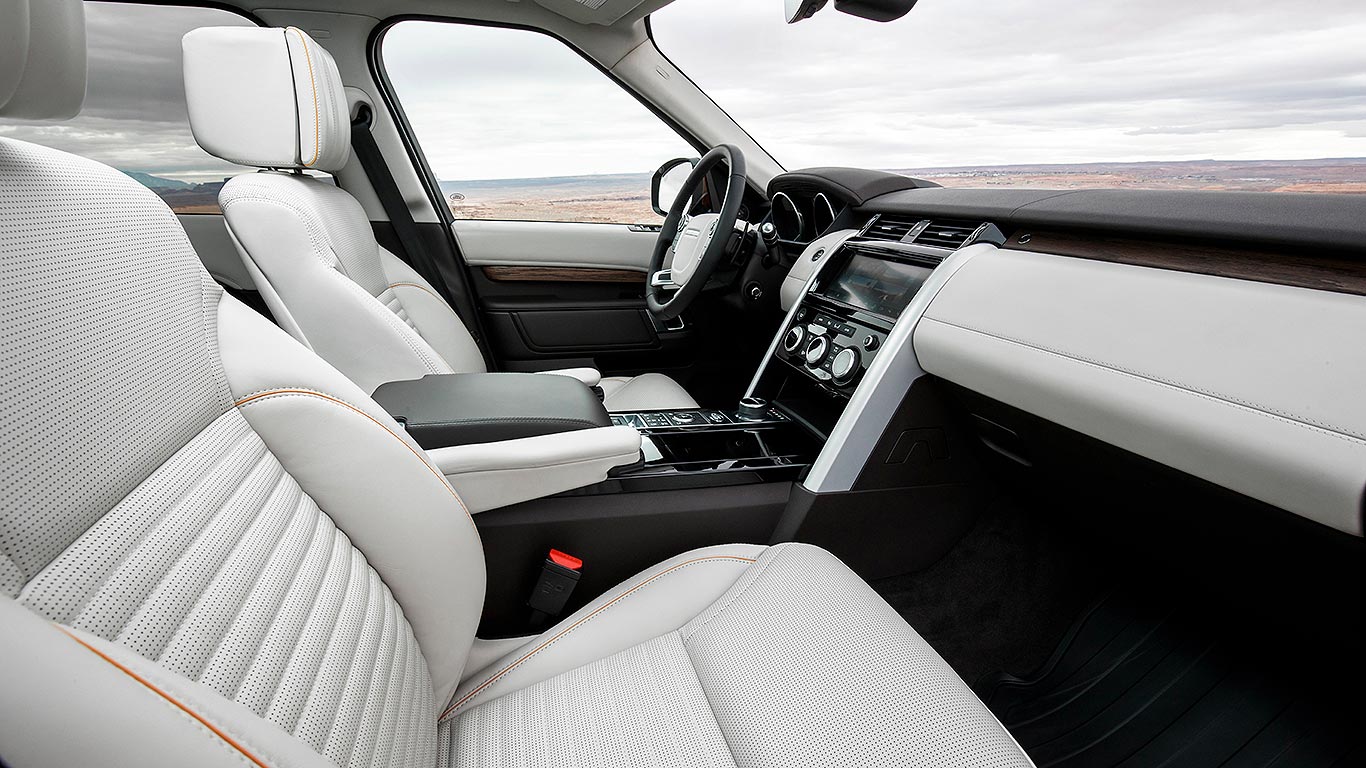 The interior is outstanding. All high-end finish, clean leather-covered surfaces and smooth detailing, it’s maybe the most instantly-appealing interior Land Rover offers. The finishes are smart, with features such as inlaid wood and metal, but not indulgent like a Range Rover. It’s ‘modern premium’, and very well executed. Think clean, Swedish-style design, with added Land Rover character.

This might be a silly question, but is the new Discovery big inside?

It’s enormous inside. Land Rover makes a big play on designing its vehicles from the inside out. The Discovery is big on the road, five metres long, wide and tall, but also massive on the inside. Adults feel almost child-sized up front, have limo-like room in the middle row and can even sit comfortably in the third row. Someone on the engineering team is 6ft 4ins and is fine in the seven-seat Discovery, we were told. He was squashed and had his head shoved into the roof when they tested Q7 and XC90. See: that stepped roof IS still functional.

Visibility is also excellent, as it should be in a Discovery. You sit high, the windscreen is deep, side windows are deep, the wide windowledge to rest your arm on remains: it’s very feel-good. Those in the back have big windows as well, while stadium seating still sits them progressively higher up as you go back – great for reducing travel sickness, reckons Land Rover.

Let’s get rolling. What is the 2017 Land Rover Discovery like to drive?

The bit we’ve been waiting for. The first miles behind the wheel of a new Discovery, equipped with the classy TD6 engine. Start it up: the alarming agricultural clatter of before is gone. Pull away and it seems crisper, less lazy, lighter on its toes. The steering is transformed, from slow, heavy and spongy to light, direct and responsive (it’s the same system as a Range Rover Sport). And with standard air suspension, the cushioned ride immediately begins to cosset.

The new Discovery wafts along then? 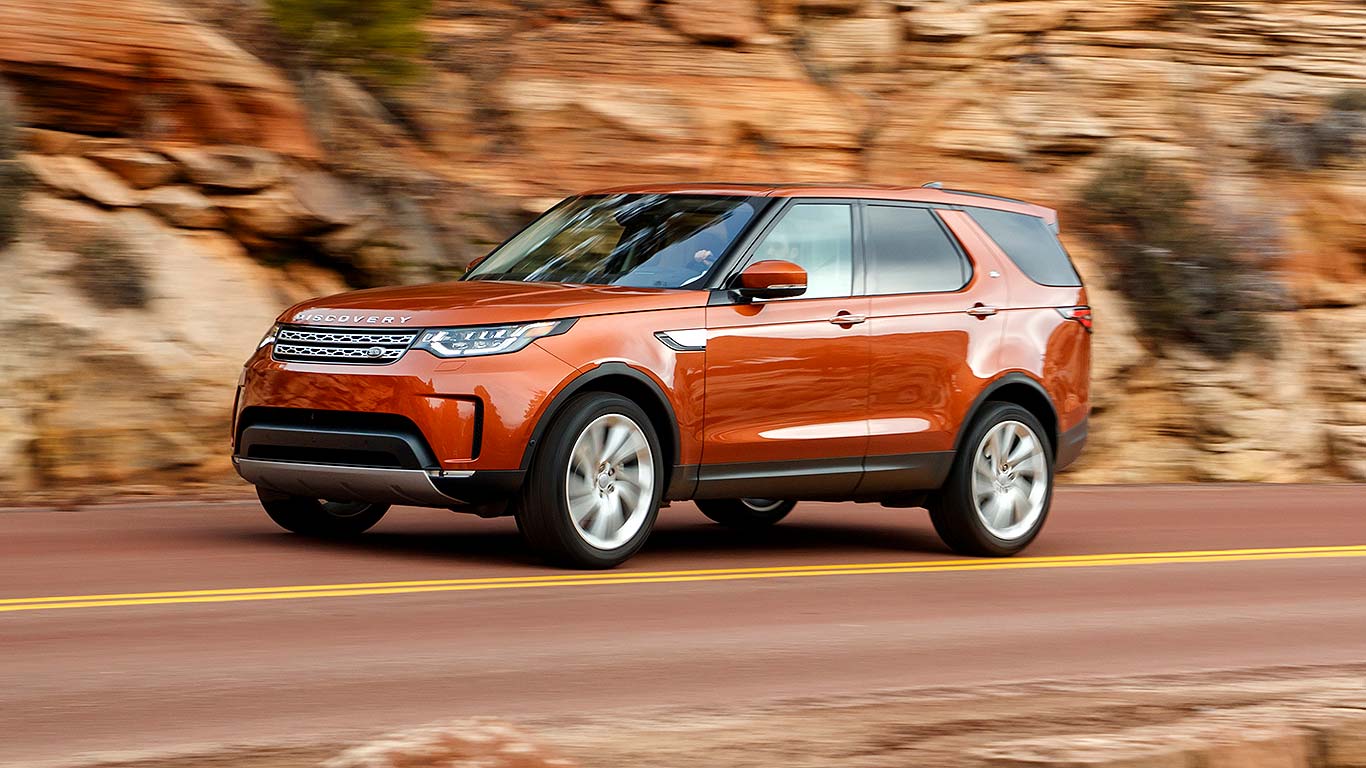 If you’re used to the old model, this new Discovery will feel like, well, a Range Rover. It’s certainly as quiet as one, say Land Rover test figures, and glides along in beautiful wafting luxury. The engine barely murmurs, bumps are soaked up quietly, yet while it impersonates a magic carpet, it doesn’t wallow like the old one could.

Sounds nice. And in corners?

Naturally, this softness will mean it leans in corners. You buy a Range Rover Sport to defy logic there. But it still drives tidily and accurately, with little of the heaving heaviness of the old one. The biggest transformation is, again, the steering, which is immeasurably more precise. Positively weighted just off centre, it’s less than three turns lock-to-lock, so you no longer need armfuls to handle a Disco, and can point it with far less effort. It’s decently precise as well.

It all sounds so lovely, I’m now worried about what it’s like off road

Land Rover knows the Discovery has gone posh, and doesn’t look like it will be as good as before off-road. But it is, and then some. A total of 283mm of ground clearance, 500mm wheel articulation and 900mm wading depth are all class-leading and better than before. A mass of 4×4 tech, including surface-sensing Terrain Response 2, gives it the legs to tackle any surface.

It’s good on the rough stuff, then? 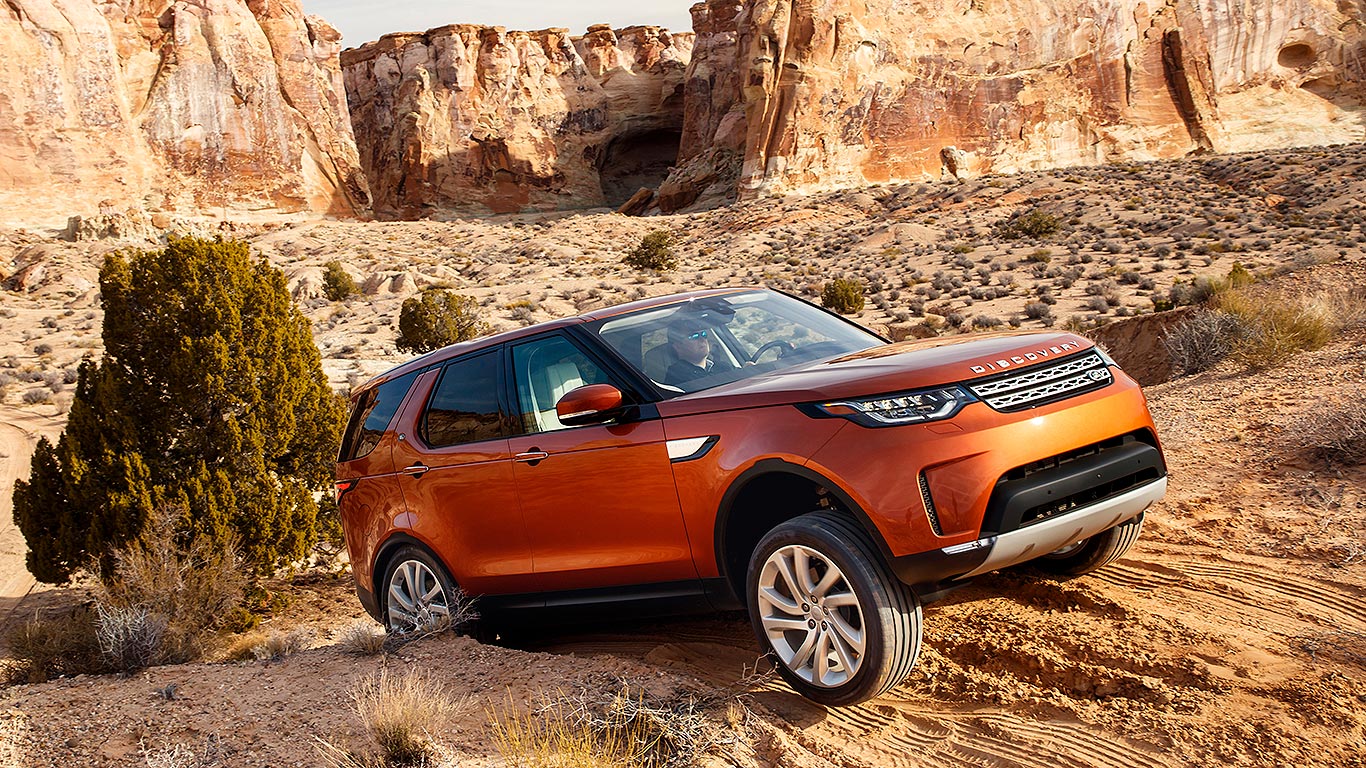 Anything the old Discovery 4 could do off-road, the new Discovery can do better. Climb across rocks, charge through sand, monster hills – it’s amazingly accomplished. But more refined, easier to drive and less effort than before as well. You might hesitate to take your posh new Disco across such terrains, but it’s more than up for it. Relief: the Discovery hasn’t gone soft. It remains an authentic Land Rover off-road.

What about the famed Discovery practicality?

Land Rover is super-chuffed with the new Discovery’s versatility. You can store four iPads in the front centre console, and there are little tablet pockets in the front seat-backs. The box between the front seats is a fridge big enough to house glug-sized bottles. Behind the climate control panel is a secret stowage box. Rear passengers get their own stowage cubbies. The dual glovebox has been retained. And there’s more…

The Discovery split tailgate is gone!

Mourn the demise of the split tailgate. But the massive single-piece tailgate is clever in its own right. It electric-opens to reveal a humungous load area for one thing; even in seven-seat format, it has a 258-litre boot, not far shy of a Ford Fiesta. Also, an electric fold-down panel has been added on to mimic the split tailgate. You can sit on it, or use it to slide in heavy items. Get over the cool factor of the old tailgate and this is certainly easier. Even if, visually, its asymmetric design still takes some getting used to.

Does it have clever seats? 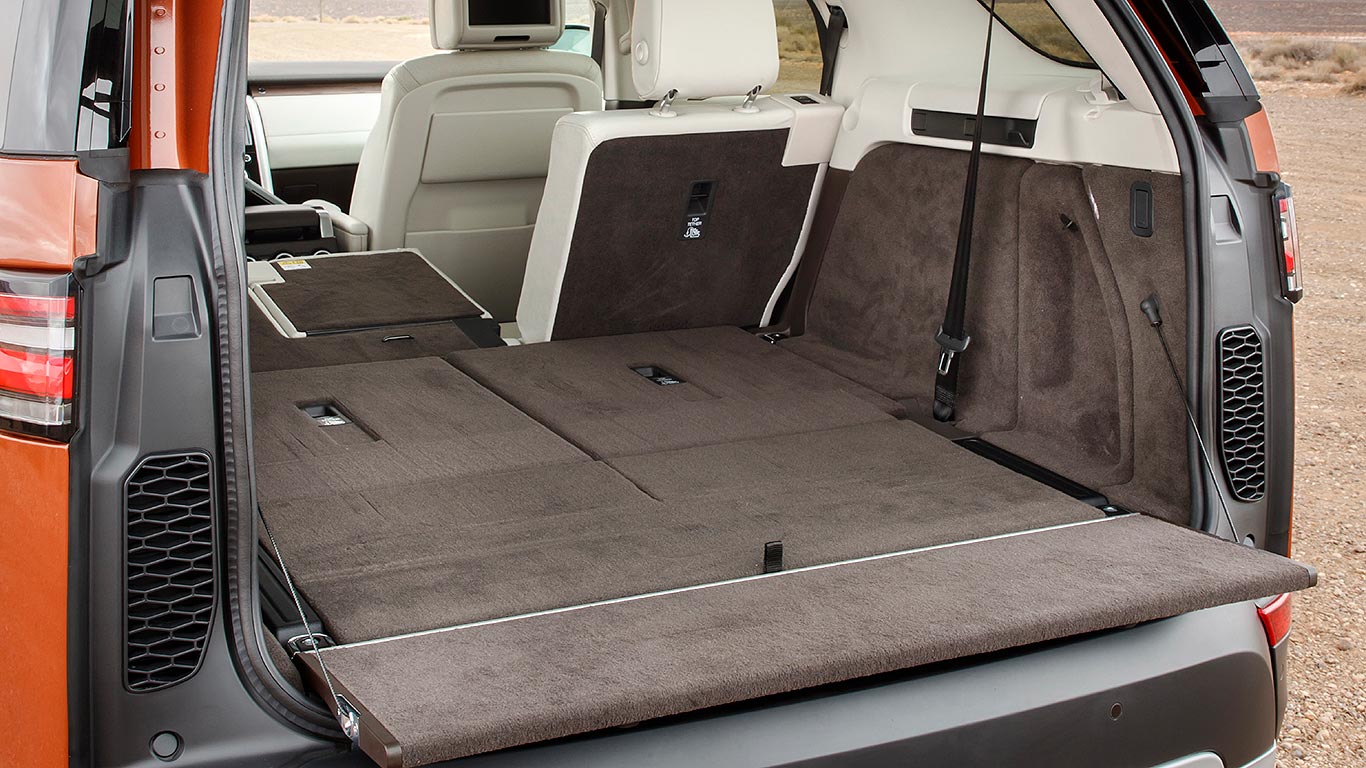 Much has been made of the Discovery’s electric-fold seats, and justifiably so. They’re ingenious. From a panel in the boot, you can electric-fold the seats down in 14 seconds. This control pack also lets you raise and lower the back of the Disco at the press of a button (it’s fun supermarket car park theatre). Land Rover says you can also adjust the seats via the touchscreen and via the much-promoted smartphone app. We thought they were a gimmick but, on first use, they’re actually really cool.

Infotainment is chronic in the old Discovery. This new one, with a widescreen 10in InControl Touch Pro screen, is night-and-day better. It looks good, is easy to use and is multi-layered with features and functionality. The only obvious omission is Apple CarPlay and Android Auto; Land Rover insists the system’s app-laden functionality is just as good.

The new 2017 Land Rover Discovery is a car that’s hard to fault. It has bought Discovery bang up to date, giving it step-on new levels of refinement, ease of driving, premium appeal and overall ability. But it’s also enhanced the things Land Rover says is Discovery DNA – the versatility, practicality, off-road ability. Some will have to press the reset button, and get used to the fact the Land Rover Discovery is now a genuine Audi Q7 and Volvo XC90 rival. But do so and they’ll discover this is a seriously accomplished all-rounder that’s turned into exactly the sort of machine we’d hoped it would. On first evidence, it’s an unqualified bravo, Land Rover.