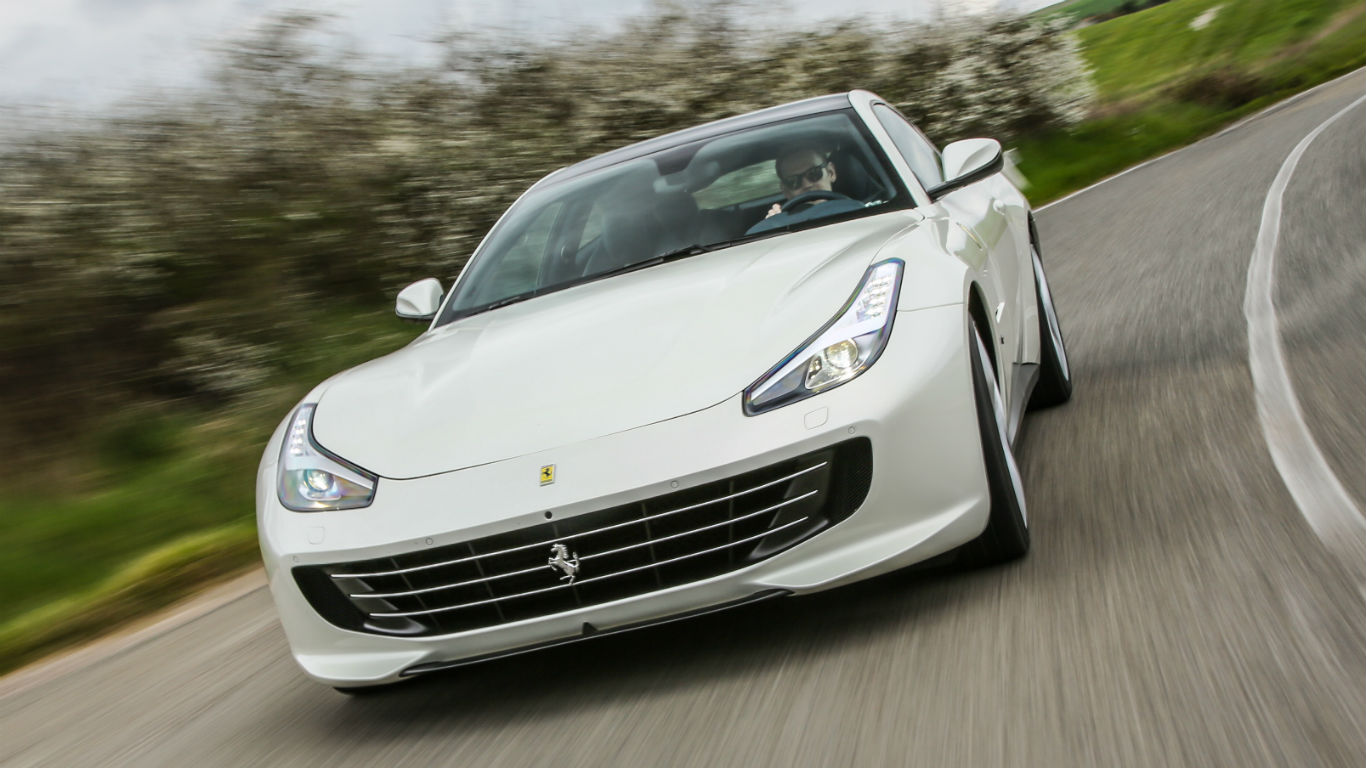 The GTC4Lusso replaced the Ferrari FF when it arrived last year, and now the Maranello firm is offering a watered-down version in the form of the GTC4Lusso T. That’s if you class 610hp from a twin-turbo V8 and a 0-62mph time of 3.5 seconds as ‘watered down’. The real question is… should you buy one over the full-fat V12?

So what’s the point of the V8?

Ferrari says it’s targeting a younger audience with its GTC4Lusso T. Although the purists appreciate a V12, and some hardcore customers could use four-wheel-drive, there’s a market for a rear-drive V8 for those who don’t use their car in challenging conditions or push it beyond the limits of grip rear-wheel-drive models offer. 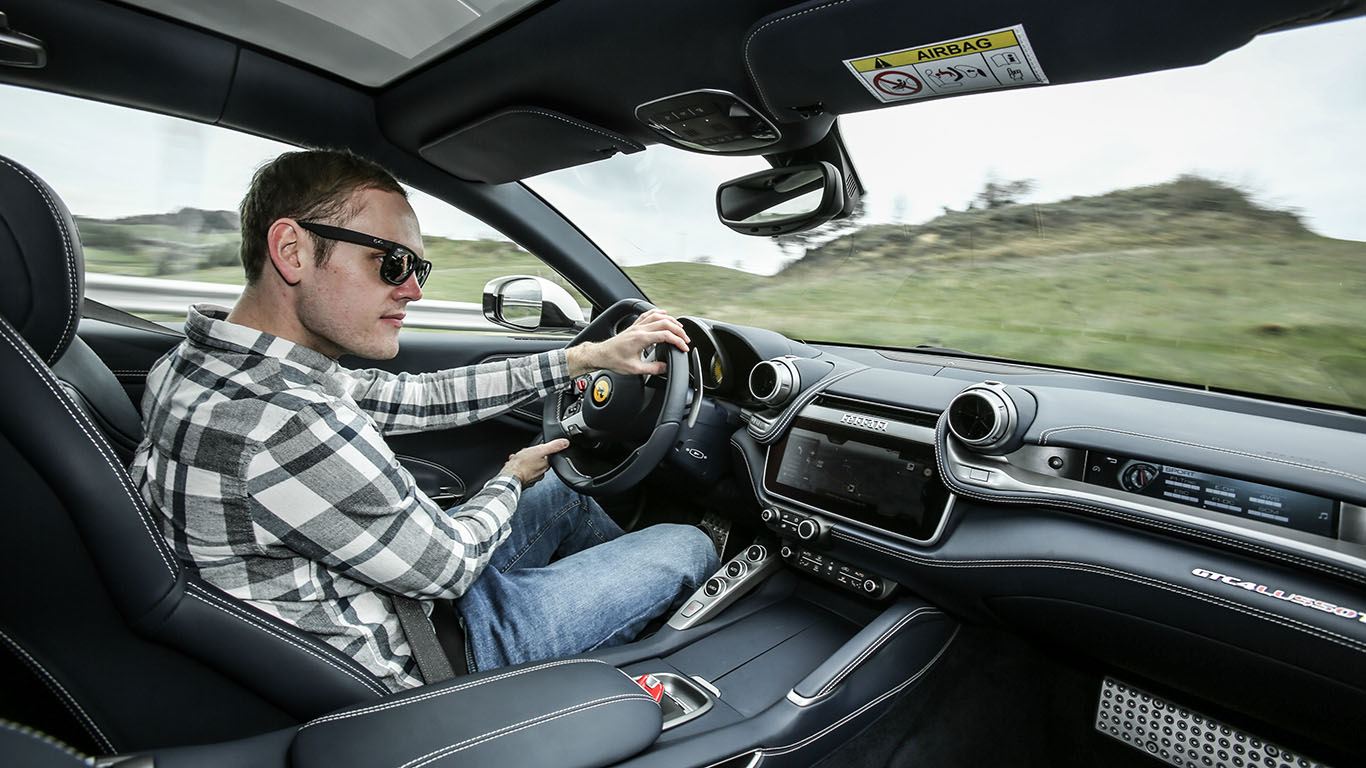 The advantage of sticking a lighter engine in the front of the car and sending power to the back is a favourable 54/46 rear-biased weight distribution. That means it’s actually nimbler than the V12, and wide tyres means it’s still incredibly difficult to unstick the GTC4 T in normal conditions. Like the regular model, the T gets rear-wheel steering which helps shrink the car on twisty roads, while flicking through the Manettino dial lets you shift between comfort, sport and ESC-off modes.

Turning off the traction control brings Ferrari’s third-generation Side Slip Control into play. This allows a degree of slip before reigning it in and, although we advise against trying it out on public roads, it can make the most average of drivers look a hero on track.

Any other advantages of the V8? 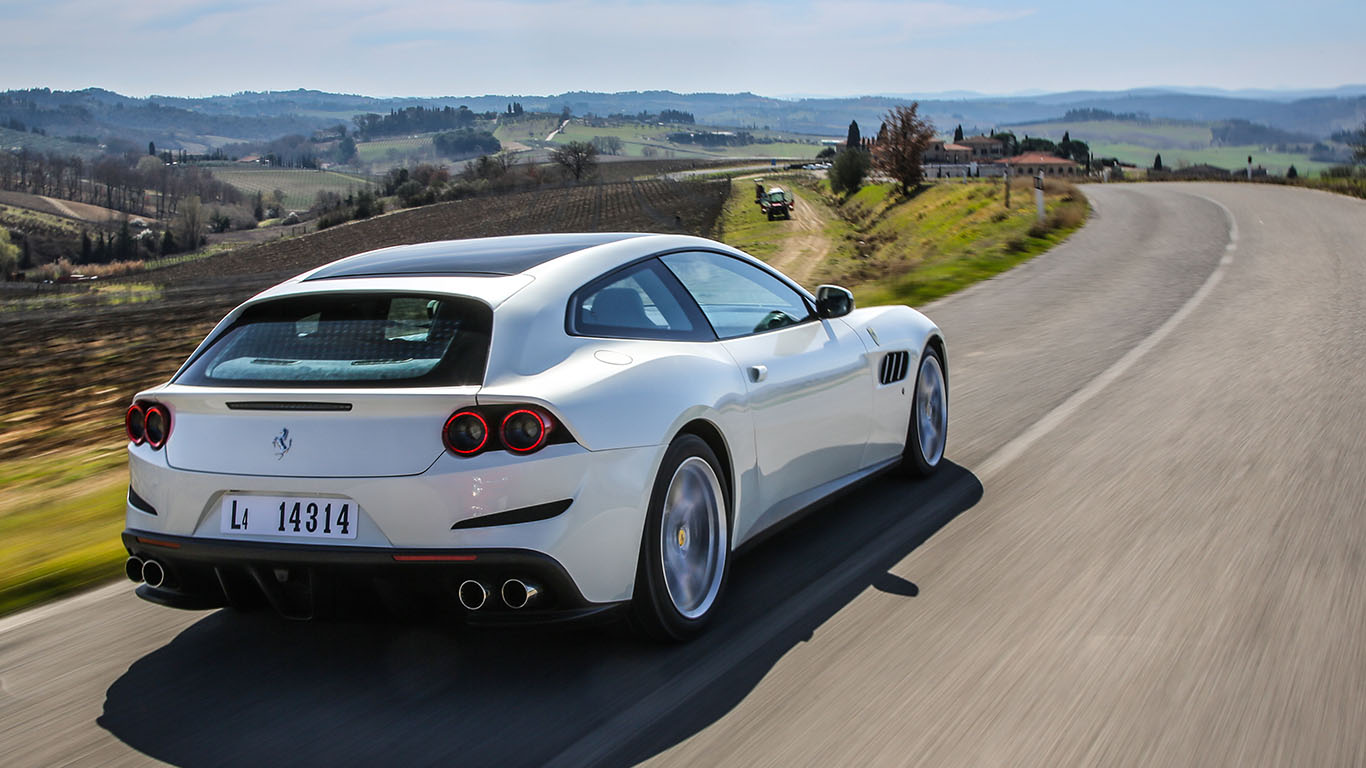 Of course, the big bonus of the T over the V12 is the greater efficiency. While 24.8mpg compared to 18.8mpg might not seen a huge deal if you’re spending hundreds of thousands on a Ferrari, the 30% extra range will help when devouring continents. In some markets, the efficiency advantages of the V8 also means buyers will save a fortune in tax.

If anyone can deal with turbo lag, it’s Ferrari’s engineers. Throttle response is almost instantaneous, but we’d recommend taking control of the gears using the paddleshifters if you’re serious about driving. There’s not quite the same shove from the rear as other Ferraris with the same engine, but GTC4Lusso T buyers aren’t after that, apparently. Torque is fairly linear and it’s an easy car to drive.

It won’t sound as good, though…

No, it doesn’t, but it must be one of the throatiest V8s on sale. Press the bright red start button on the steering wheel, and it announces its presence to your neighbours. Keep revs low (below around 3,000rpm) and the exhaust baffles remain closed, and no one will be offended. Open it up towards its 7,500rpm redline, and things get a little more anti-social. Few petrolheads will complain about the sound. 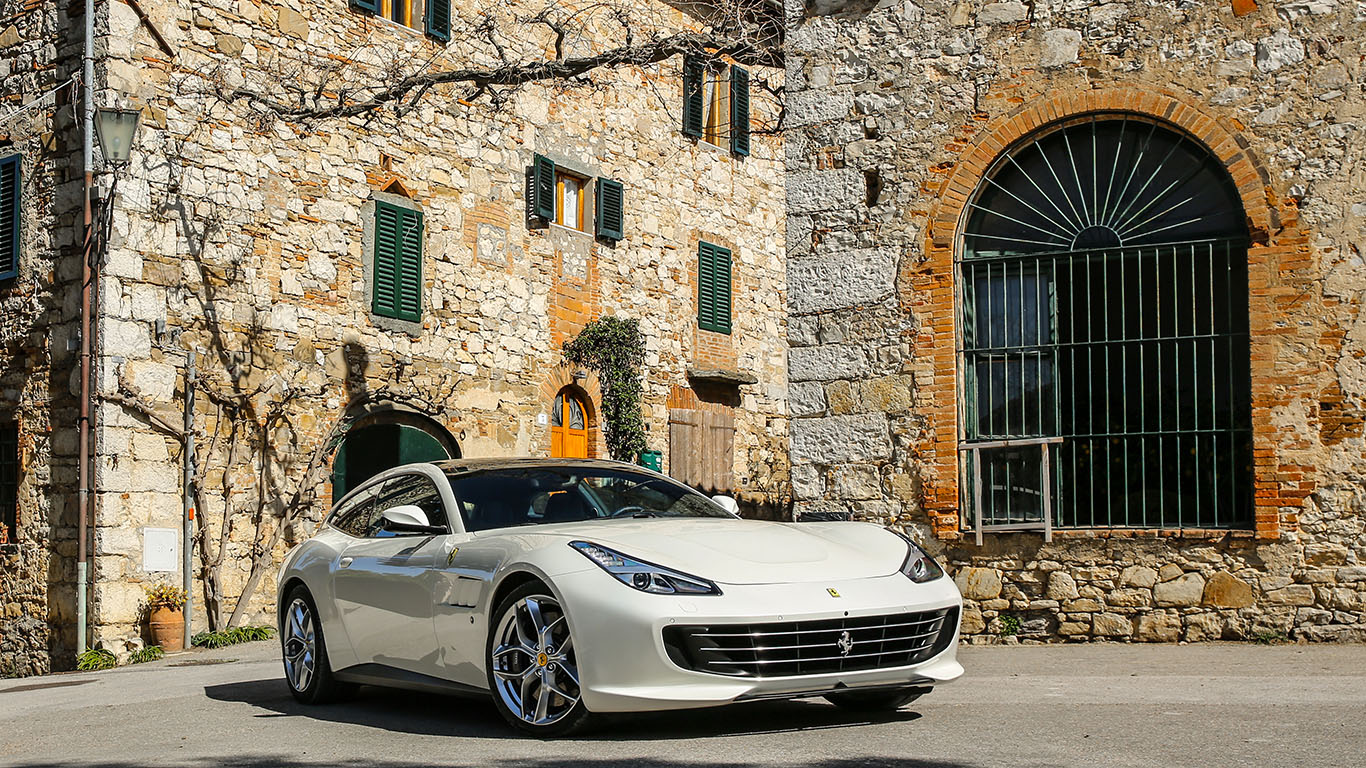 It looks good, too. The only visual differences between the V8 T and V12 are the exhaust tips and bespoke 20-inch alloys. Apart from that, it’s business as usual, with its stunning shooting brake design and new quad circle rear lights. We’d almost go as far as saying it’s the most attractive car Ferrari currently sells.

If you’re expecting SUV levels of interior luxury, just go and buy a Bentayga or a Range Rover and be done with it. There are four comfortable seats, as long as your rear passengers are happy to accept a level of discomfort in return for a ride in a Ferrari. It’s not that taller passengers won’t fit – they will – it’s just they’re not going to be happy if they have to cover long distances in the back of the GTC4Lusso T. 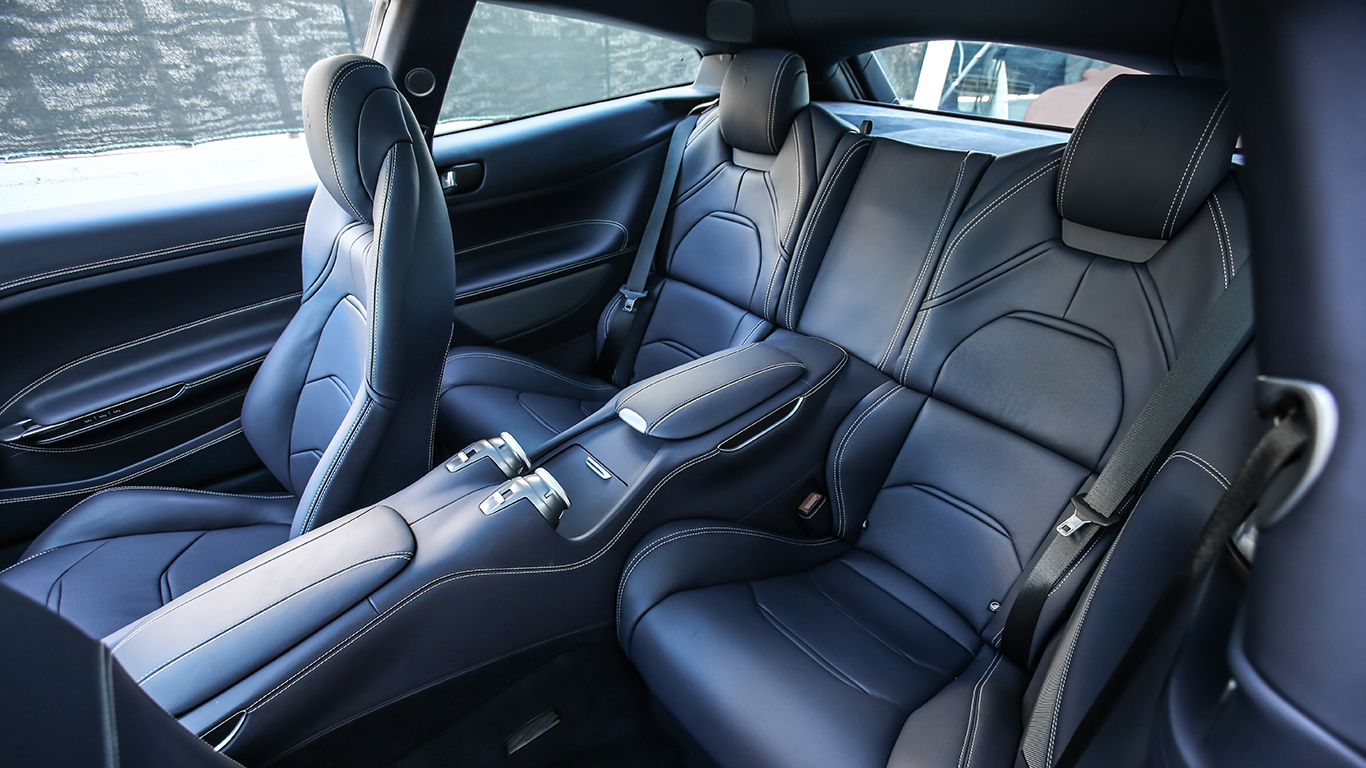 But how often do you want to carry adults in the rear? There’s plenty of practicality for a couple, perhaps with a young child or two, to head away in the GTC4Lusso T. With the rear seats up, there’s 450 litres of boot space, while dropping them expands that to 800 litres. You can, of course, buy brand Ferrari luggage gear to help squeeze as much into the boot as possible.

Should I buy a Ferrari GTC4Lusso T?

We’ve established then, that this isn’t the best grand tourer money can buy if wafting across continents is your thing. Think of it as a mildly-practical sports car rather than a family wagon. This is exemplified by the harsh ride – although the ‘bumpy road’ mode (yes, it’s a thing) did a good job of keeping the car settled on the awful Italian roads we tested it out on.

If you’re sold on the idea of a Ferrari, want a cross-continent cruiser and 610hp sounds like enough, we suspect you’d be pretty happy with a GTC4Lusso T. However, it’s not quite the relaxing GT car you might expect. Its ride is firm, its demeanor more frantic than relaxing, and it’s still anything but frugal. As a watered-down GTC4Lusso, there’s a lot to like, however. It’s almost as fast as the V12 and in some conditions, we reckon it’s actually better to drive.