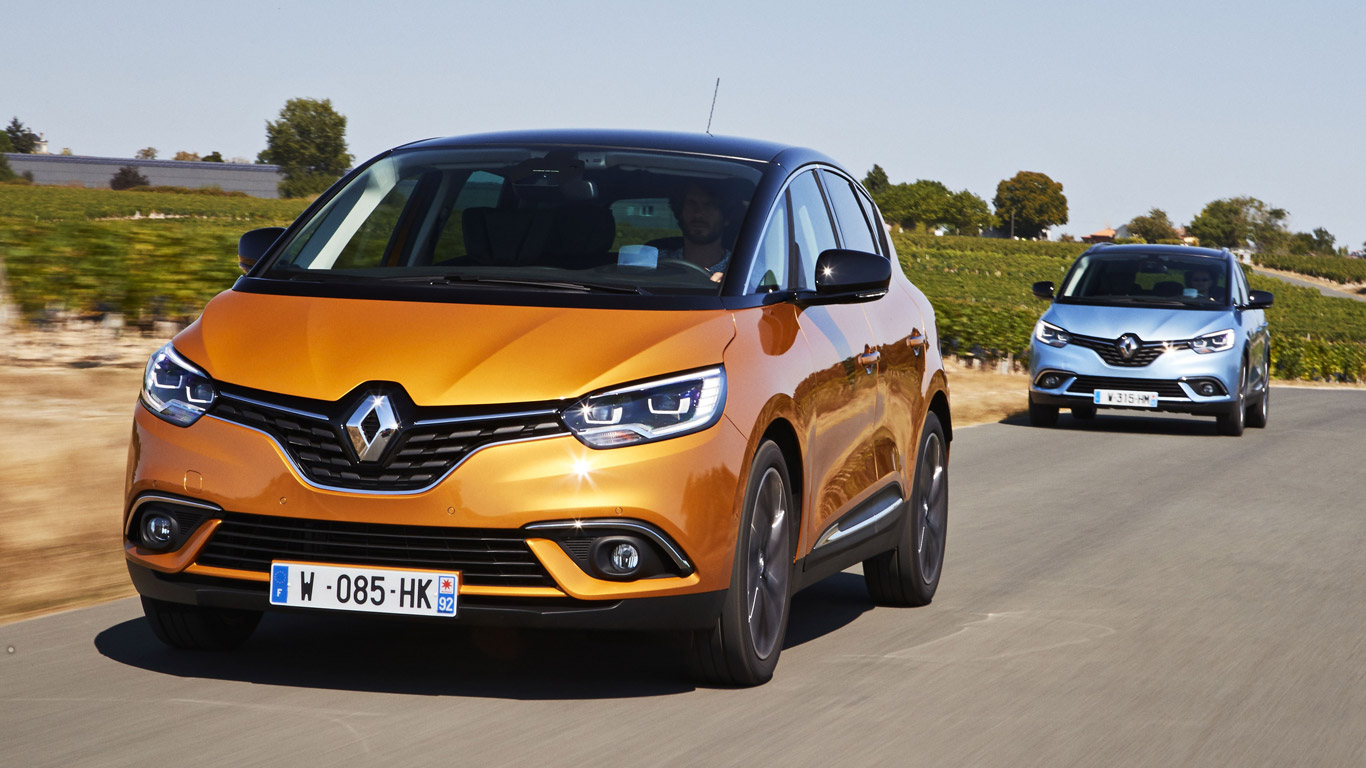 Apparently people still buy compact people carriers. Despite typical buyers of yesteryear part-exchanging their Scenics for crossovers by droves, Renault claims sales in the sector have actually shown a small incline over the last couple of years – and it’s aiming to cash in on that by giving the Scenic ‘sex appeal’.

How is the Scenic sexy?

Yes, revealed at the 2016 Geneva Motor Show, the Scenic (and its bigger brethren, the Grand Scenic) is ‘the very last word in seductive appeal’ (Renault’s words, not ours). It features a steeply-raked panoramic windscreen, along with a two-tone colour scheme and a wider stance than its predecessor.

There’s no doubt it’s aesthetically more pleasing than the Scenic of old, but how does it drive?

The new Scenic and Grand Scenic are much better to drive. No, it’s not exactly a Caterham 7 (or even a Ford C-Max for that matter), but it remains composed in corners – and the lack of bodyroll should help keep child sickness at bay. The steering is on the light side… we’d like a bit more feedback at higher speeds, but it’s a breeze to manoeuvre through town (visibility helps there, too). 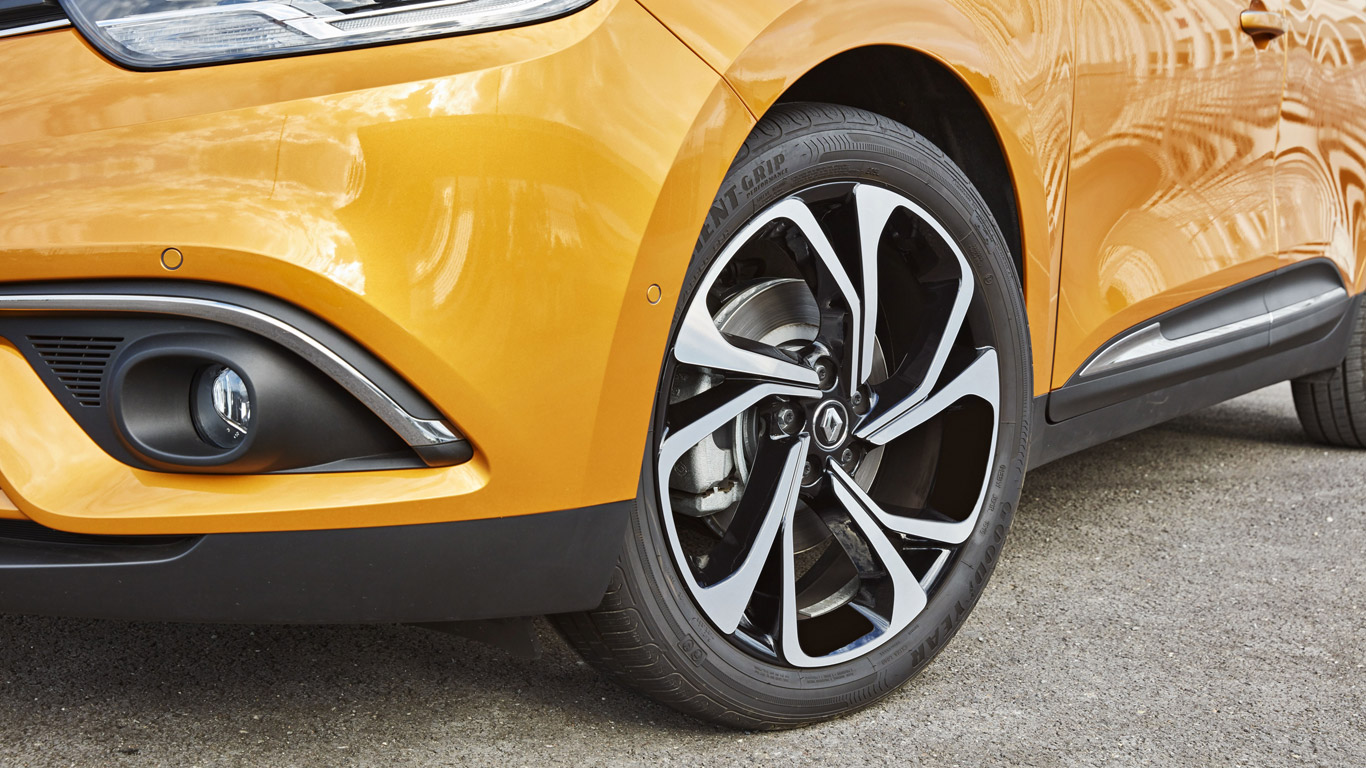 The Scenic’s handling is helped by the 20-inch alloys, standard on all models. We’re used to seeing stunning-looking cars on huge alloys at motor shows, but the attractive looks are often a little spoilt by speccing the entry-level model with 17-inch steelies. Renault is making a bold move with its new Scenic (and bigger Grand Scenic) by only offering it on larger wheels.

Doesn’t that ruin the ride?

A little. Renault says the 107mm tyre wall is the same as the 17-inch wheel on its predecessor, meaning you won’t feel every lump and bump in the road like you do in some cars fitted with big alloys. While it’s true that the Scenic has a moderately compliant ride, it’s not exactly the French waftmobile you might be looking for. We are yet to drive it on UK roads, but we suspect we might be longing for smaller wheels.

What about the cost of tyres?

Another drawback or big alloys is the pricier tyres that go with them. Renault says it’s been working with major tyre manufacturers to ensure it won’t cost any more to replace the tyres on a new scenic than if it was fitted with 17-inchers. A quick online search suggests you’ll have to budget around £120 a tyre to replace them on the new Scenic. That’s not cheap.

It is a bit noisy 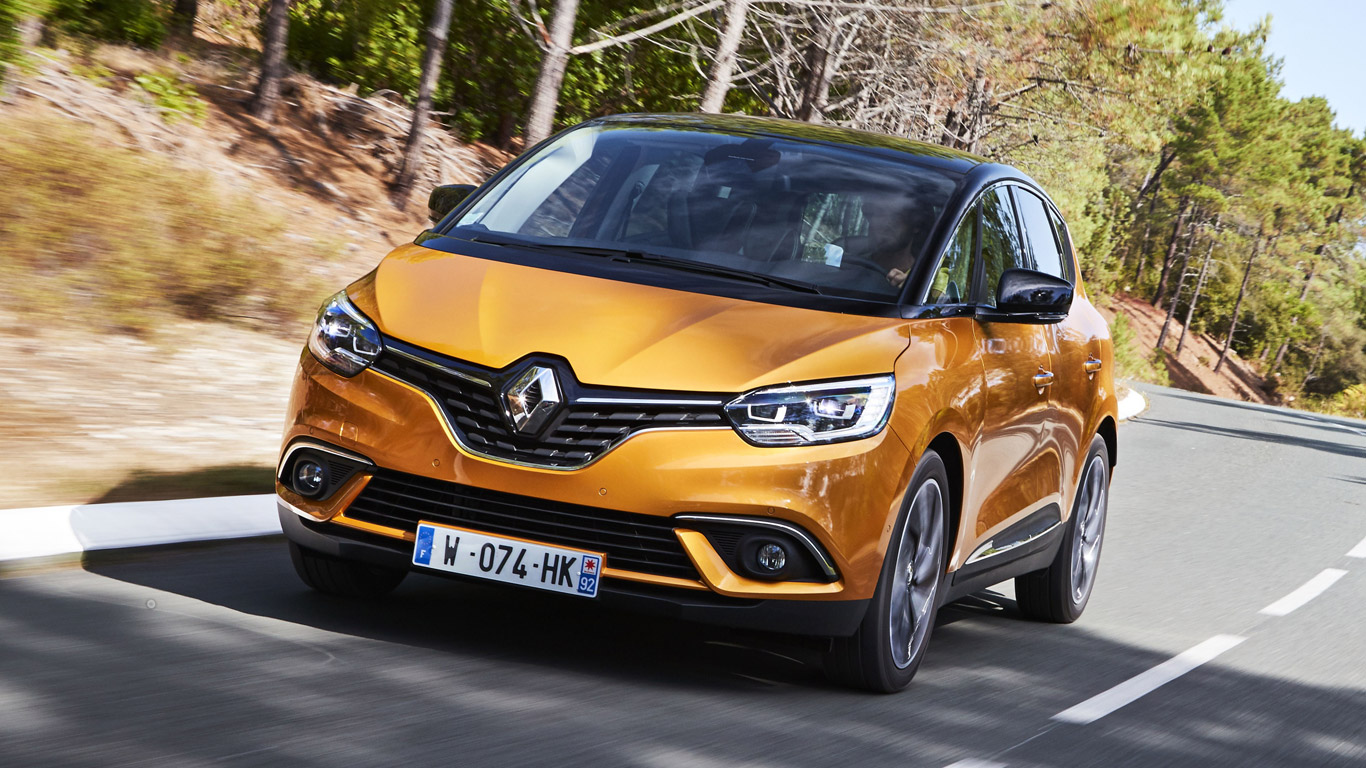 There’s only so much engineers can do to reduce wind noise created by something the shape of the Renault Scenic, but we were still surprised by how noisy it is at motorway speeds. Both the Scenic and Grand Scenic models had us checking to see if we’d mistakenly left a window slightly open. It could get very annoying on long journeys.

How big’s the boot?

If you’re considering a Scenic, you’re likely to be more concerned by practicality than how fun it is to drive. We’ll hit you with some stats: the Renault Scenic boasts a best-in-class 572 litres of boot space, while the Grand Scenic has 596 litres.

The Renault Grand Scenic is a seven-seater, and with those rear seats in place, boot space is pretty woeful (just 189 litres, or barely half the size of a Ford Focus hatchback). That’s the norm for this sector… give a compact MPV seven seats and a big boot and it’ll no longer be, well, compact.

That aside, is it pretty practical? 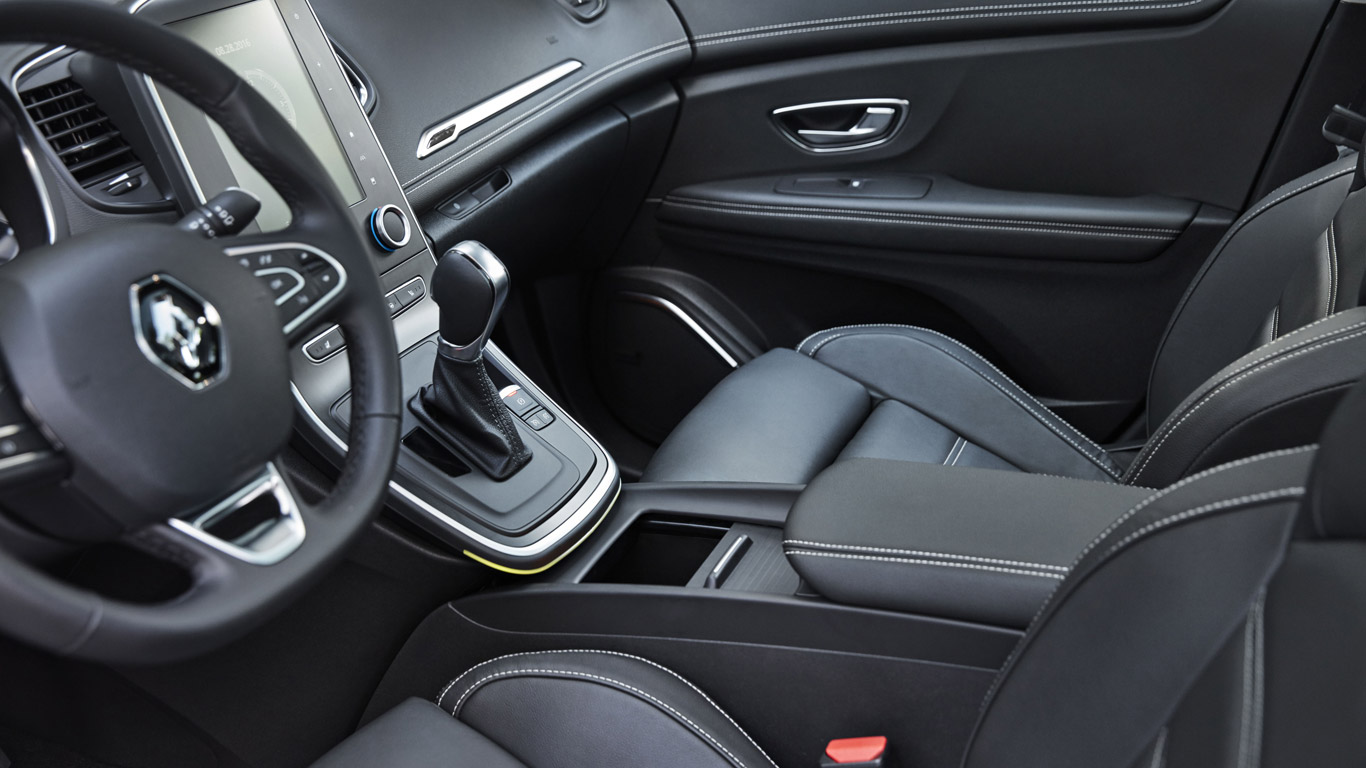 Underfloor compartments along with a clever sliding centre console means there’s plenty of storage space, and kids should be fairly happy in the back. It’s not overly roomy if you’re carrying adult passengers in the rear, however – and the third row of seats on the Grand Scenic really are for occasional use only.

One reason that many previous buyers of compact MPVs have turned towards crossovers is that, in the old days, they used to be pretty horrible to drive. We’re not talking about the nuances of their handling, but everything from the bus-like driving position to the plethora of wipe-clean plastics in the cabin. While there’s still some of the latter (although the cabin is fairly upmarket), you sit relatively low down in the Scenic and the huge panoramic sunroof fitted to our test car made for an airy cabin.

If you’re looking for a car to carry your kids, you understandably want the safest you can buy. The Scenic’s been awarded a five-star Euro NCAP crash rating, with reinforced steels used to keep your family safe in the event of a crash. There’s a host of technology, too – such as fatigue alert, which monitors the driver and tells them to pull over if they’re showing signs of being tired. 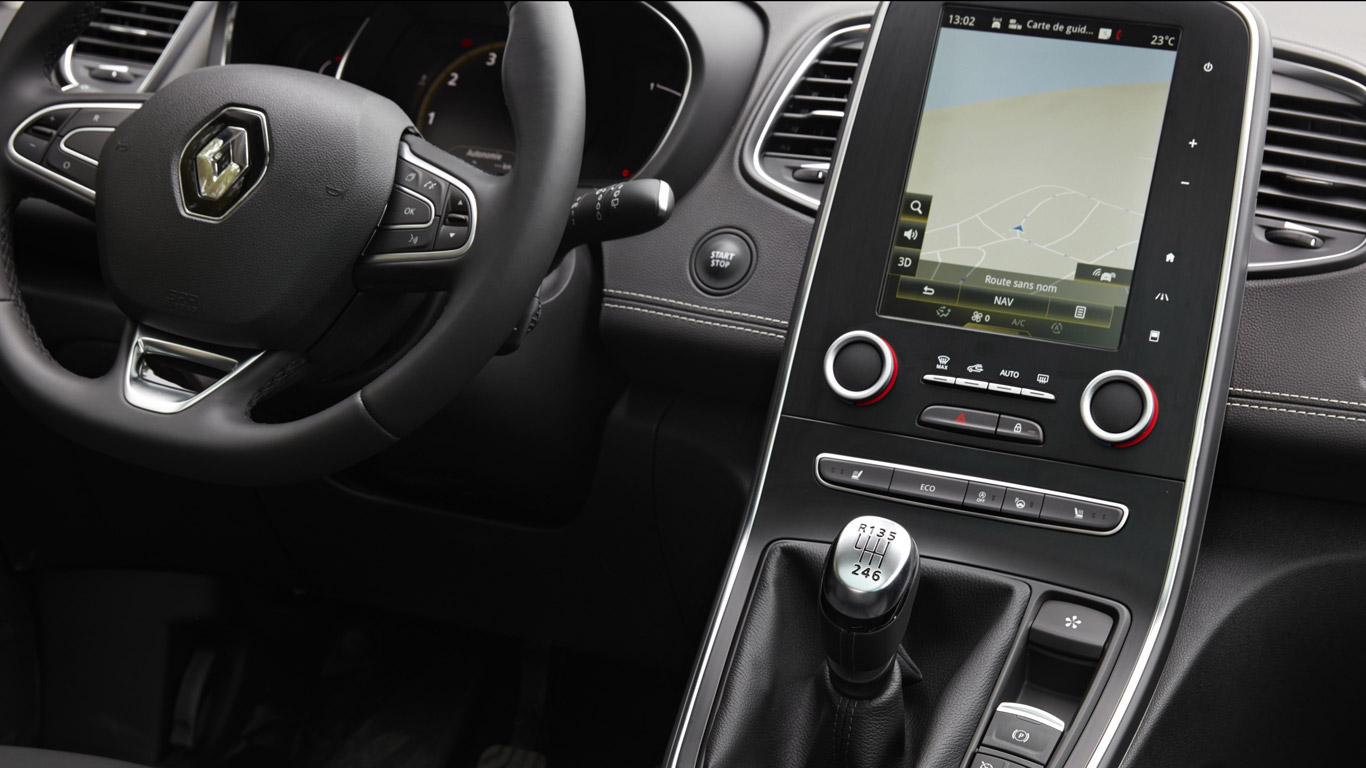 Buttons are out, huge tablet-esque infotainment screens are in. We’ve already seen Renault’s latest portrait attempt in the Megane, and it’s a fairly intuitive system to use. Standard on the top two trims, R-Link 2 looks great, but can be a little slow to respond.

But there are still some buttons…

Despite this, Renault hasn’t entirely eliminated the buttons from the dash. Some are a little awkwardly-placed (the cruise control looks to have been located for the convenience of front-seat passengers, for example), and others seem to do little more than act as shortcuts to some of the R-Links functions.

Talk to me about engines

Buyers get a wide choice of engines: from a 115hp 1.2-litre petrol to a 160hp 1.6-litre diesel. We tried the regular Scenic in 130hp 1.2-litre guise, and found it to be well up to the job of shifting the people carrier. It’s a little noisy when pushed, and the six-speed gearbox is a little clunky to use, but it’s a likeable powertrain overall.

What about the diesel? 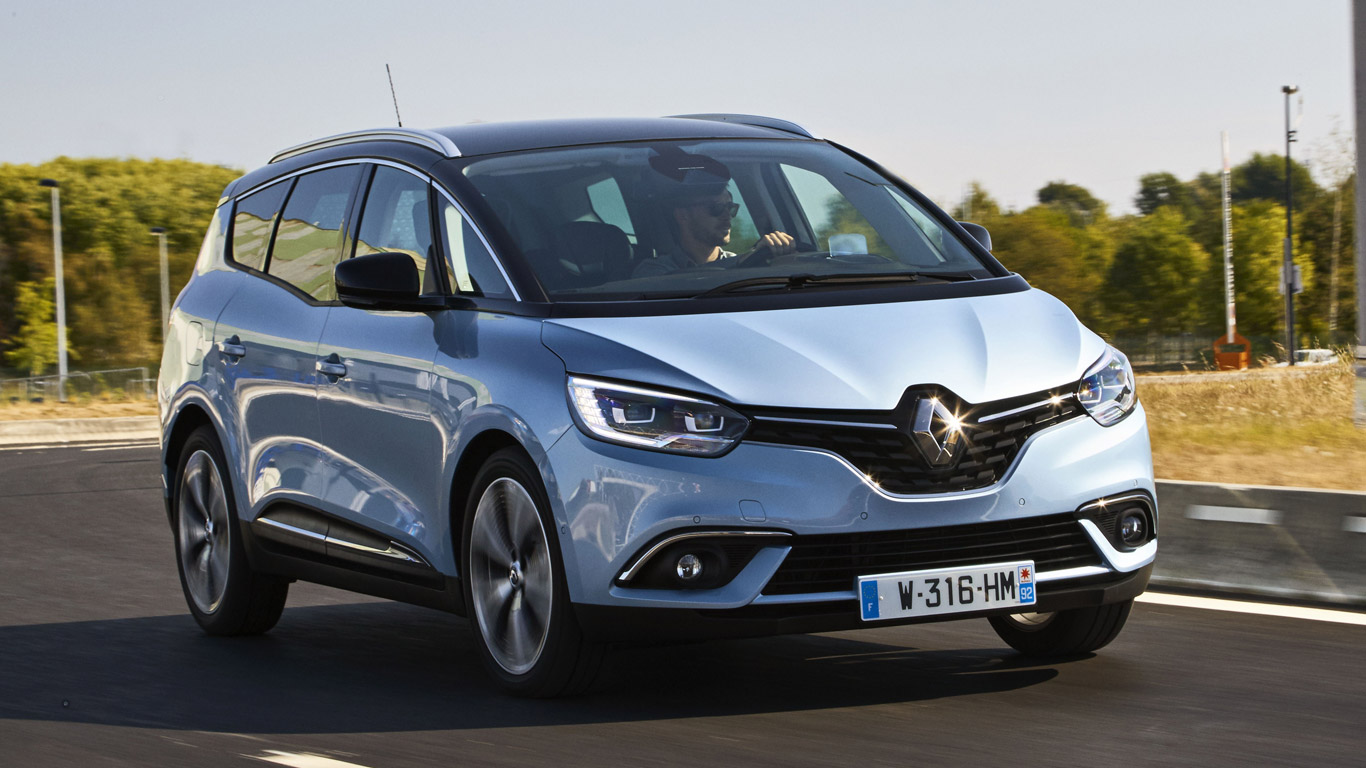 We also spent some time driving the Grand Scenic with the 160hp diesel engine with the six-speed automatic gearbox. This is better suited to the hauling around the extra mass of the seven-seater. The auto ‘box is quick enough to respond (selecting sport mode allows hastier roundabout negotiations), and the diesel engine is a refined unit.

How efficient is the Scenic?

Officially, the petrol TCe 130 Scenic we tested returns 48.7mpg and emits 129g/km CO2. The top-of-the-range 160hp dCi diesel returns 60.1mpg and 122g/km CO2 in Grand Scenic guise. While the diesel would be tempting for high-mileage users, we wouldn’t automatically dismiss the petrol.

For those wanting maximum eco points, Renault’s jumping on the hybrid bandcamp. It’s in a slightly half-hearted manner, though, with its ‘hybrid assist’ model. This combines the dCi 110 diesel engine with a 10kW electric motor which recuperates energy during deceleration and provides as much as 11lb ft of extra torque when required.

Is the hybrid assist worth the extra? 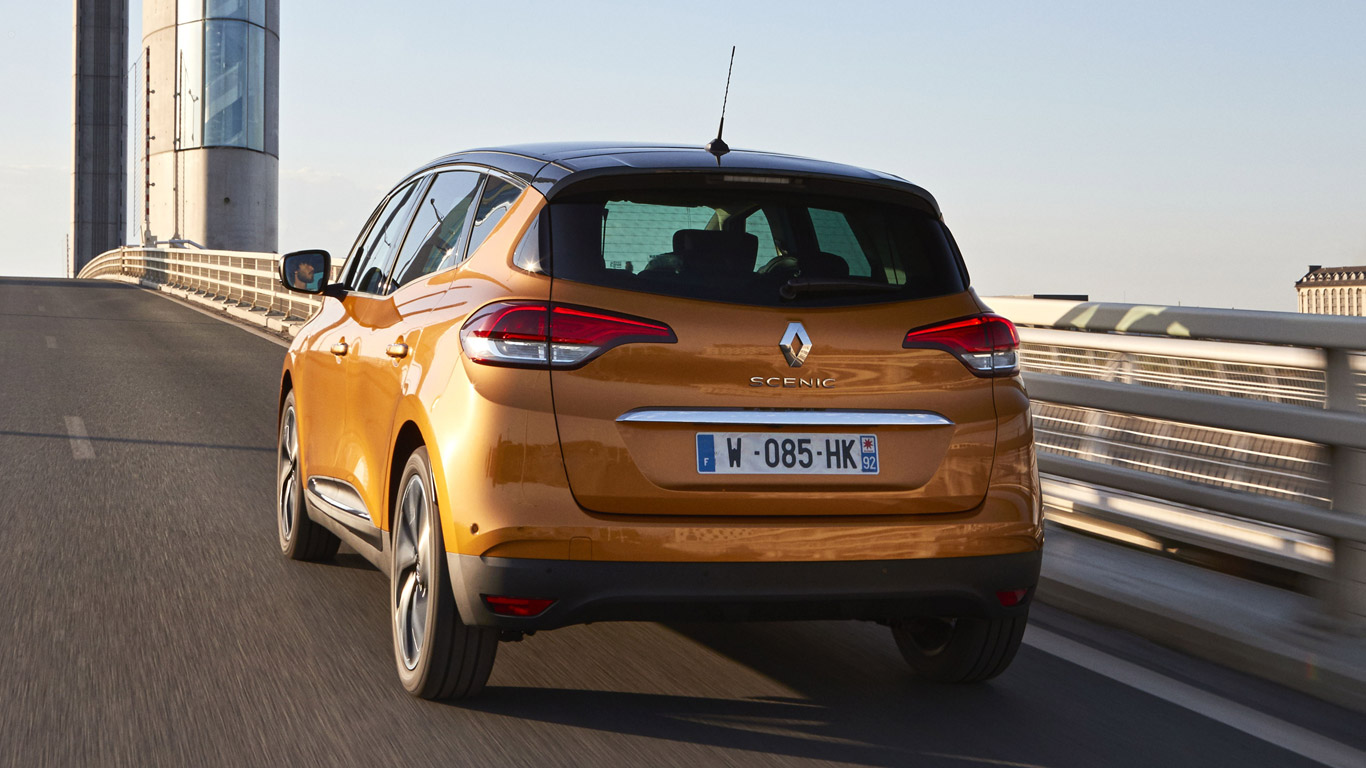 The result is a drop in CO2 emissions from 100g/km to 92g/km and improved MPG from 72 to 80. We don’t know how much it’ll cost when it makes it to the UK, but advantages in terms of road and company car tax are minimal. Worth the extra? Probably not.

The Scenic’s main competitor is fellow French MPV, the futuristic Citroen C4 Picasso – and you should also consider the Ford C-Max and Volkswagen Tiguan. Our first impressions suggest it should be high up on your shortlist.

We remain to be convinced that there is much of a market for the Scenic and Grand Scenic – we’d sooner drive a Captur or Kadjar – but if you’ve decided a compact MPV will work for you, there’s a lot to like about the Scenic.

While we’ll stop short of describing it as ‘sexy’, it’s certainly a more interesting and appealing proposition that Scenics of old – and more attractive than drab rivals such as the Volkswagen Tiguan, too.