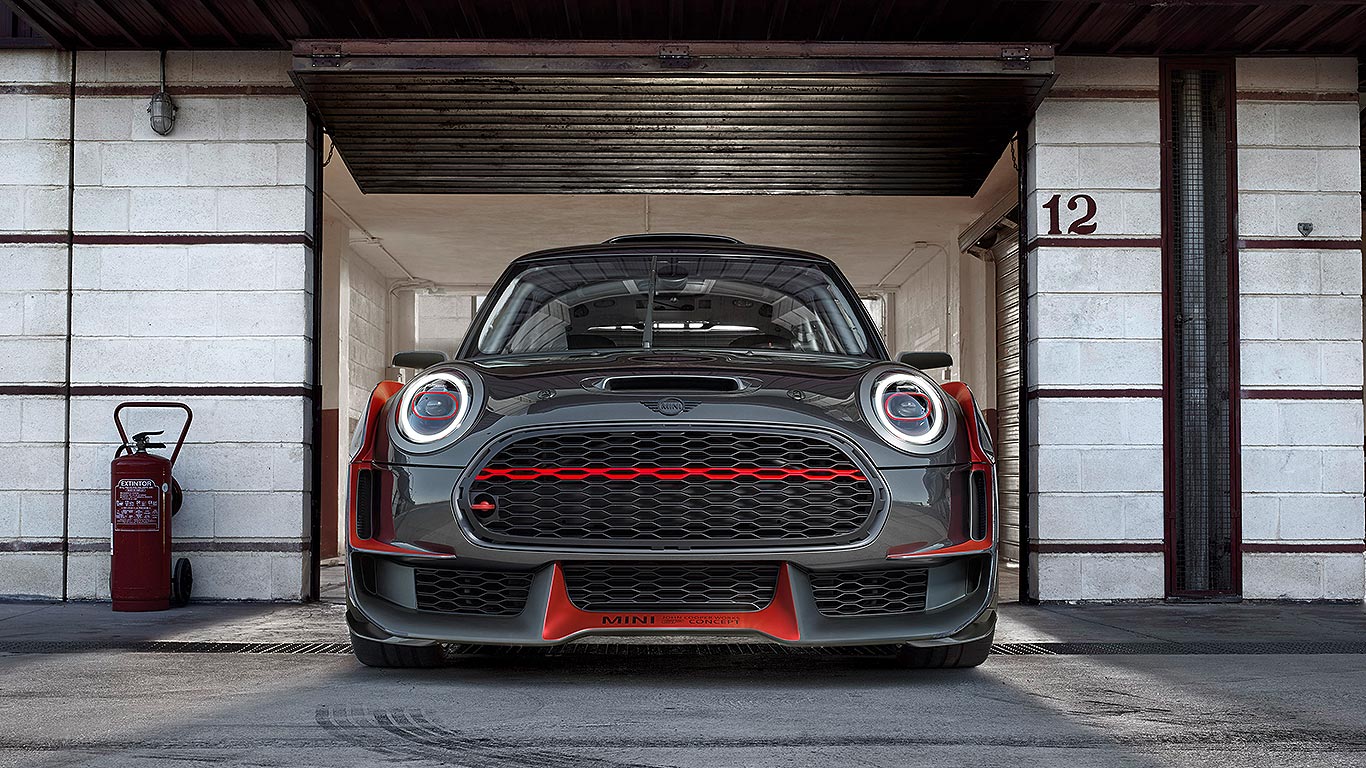 Mini is preparing to bring back the hardcore two-seat Works GP special edition – and will showcase a preview Mini John Cooper Works GP Concept at the 2017 Frankfurt Motor Show, giving us our first look at the extreme new Mini hyper-hatch.

Officially there to mark 50 years since the classic Mini Cooper S won the Monte Carlo Rally, the model also wears ‘1959’ graphics that reference the launch of the original Mini. This suggests the firm may bring it out as a special edition to mark 60 years of the Mini in 2019 – and what a showcase the new Works GP could be. 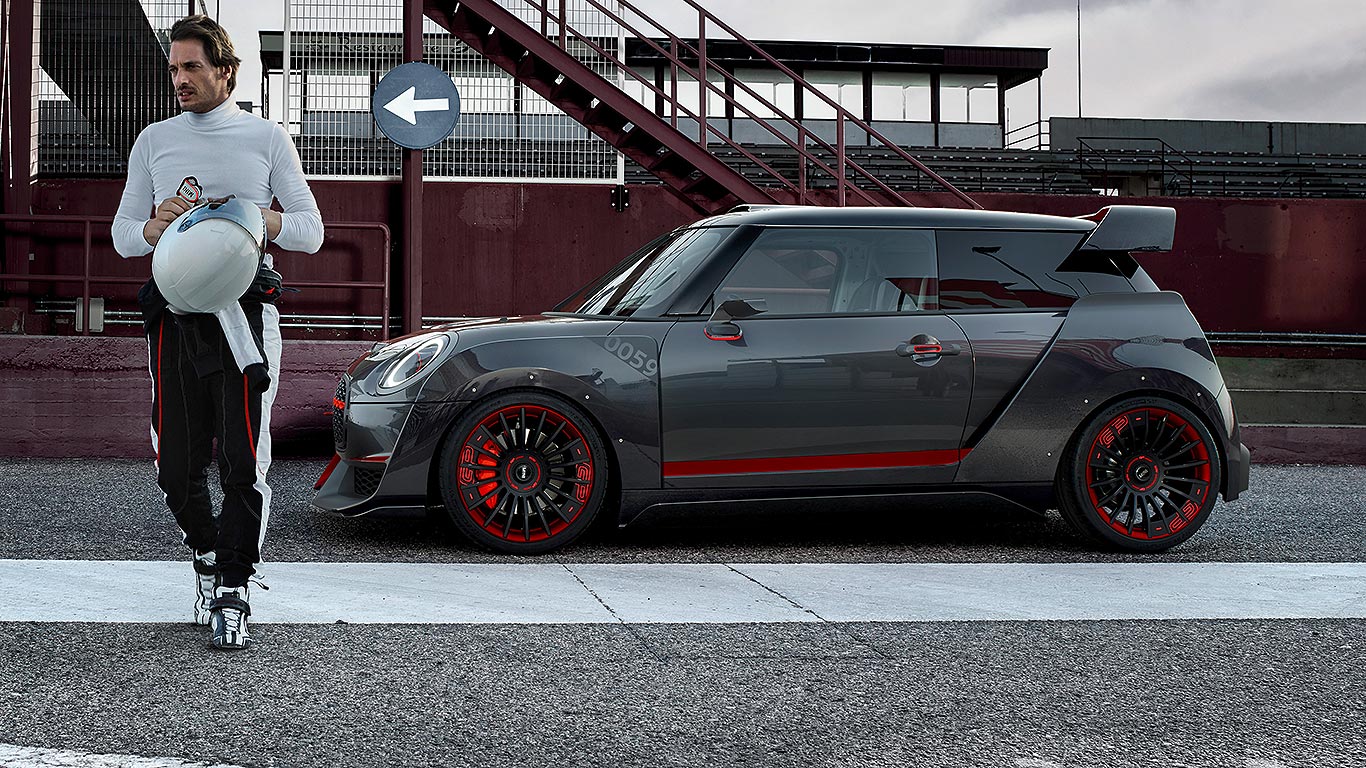 Only 2,000 examples of the original 2006 Mini Cooper S John Cooper Works GP and 2012 Mini John Cooper Works GP were built, and the new one would be built in similarly small numbers. And like those cars, it seems Mini is planning to make this one equally as extreme, even down to the two-seat interior with full roll cage installed behind the passengers. “This is driving fun in its purest form, says Mini boss Peter Schwarzenbauer, offering “levels of performance found in motor sport competition”. 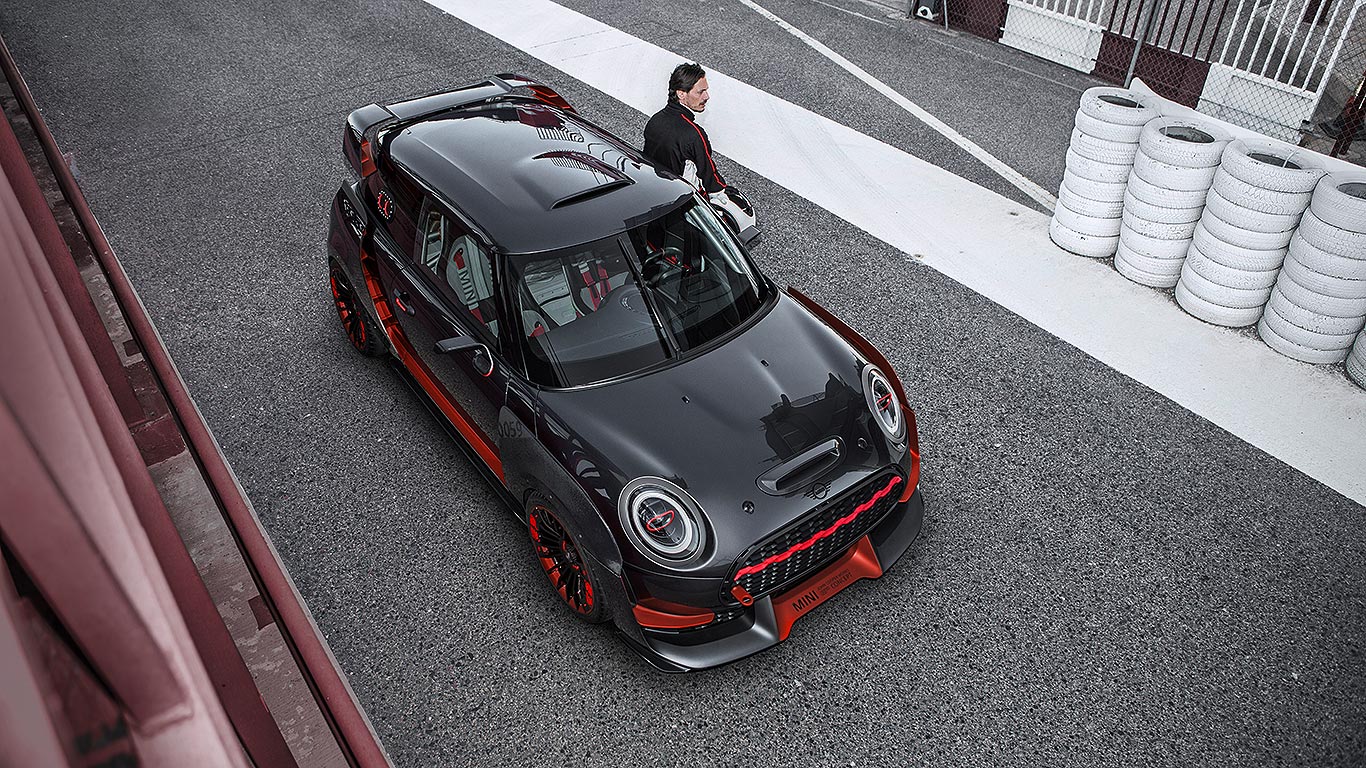 The images clearly show the new Works GP Concept is significantly wider than the regular Mini JCW, with large front and rear aprons, massive front and rear aero panels and the largest rear spoiler yet fitted to a Mini. Much of it is made from carbon fibre, and Mini says the weight distribution has been honed so that it’s evenly balanced. “What we’re looking at here is maximum performance, maximum Mini,” says BMW Group design boss Adrian van Hooydonk. 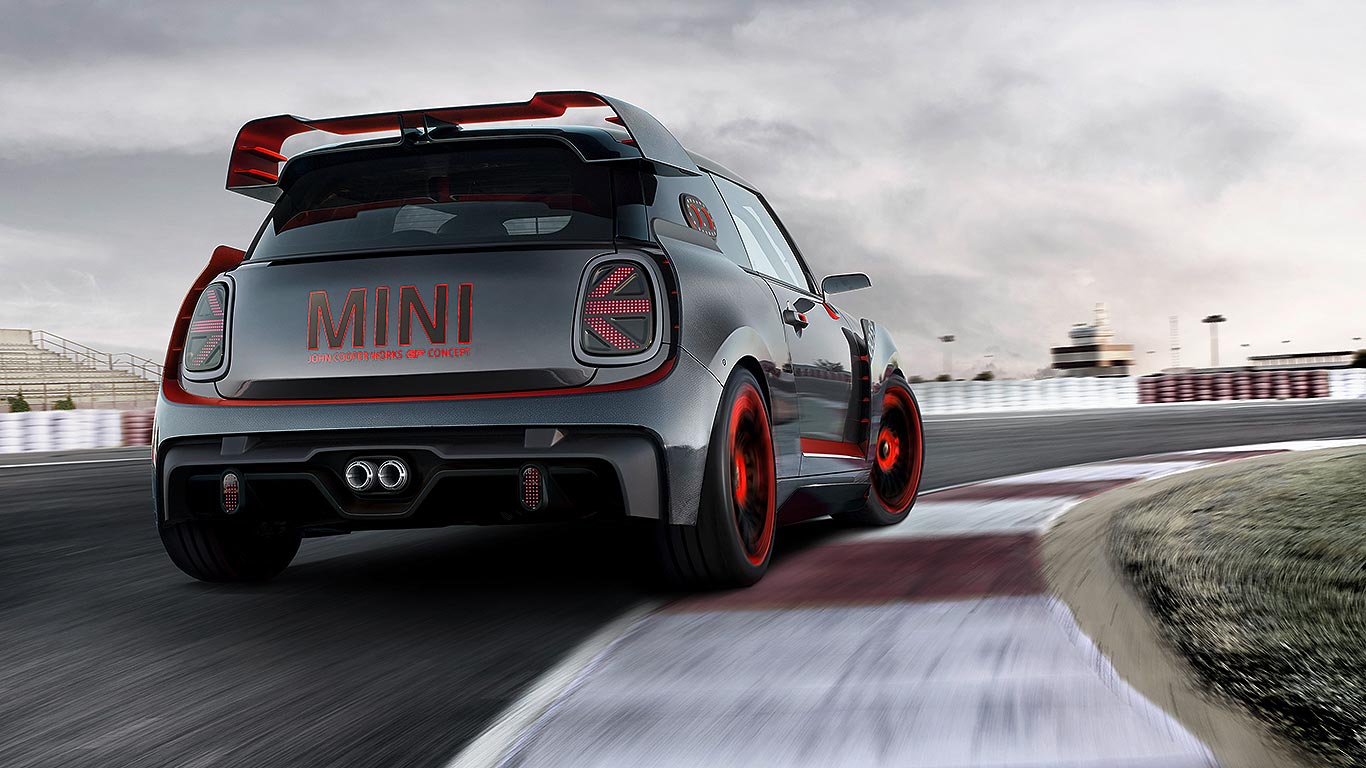 Design highlights include liberal use of Highspeed Orange and Curbside Red detail paint throughout the Black Jack Anthracite body colour, exposed carbon fibre for features such as the motorsport-grade front apron, amazing 19-inch lightweight alloys and a rear end “bombarded” by aero addenda and those half-Union Jack tail lamps that are fast becoming a Mini concept car trademark. 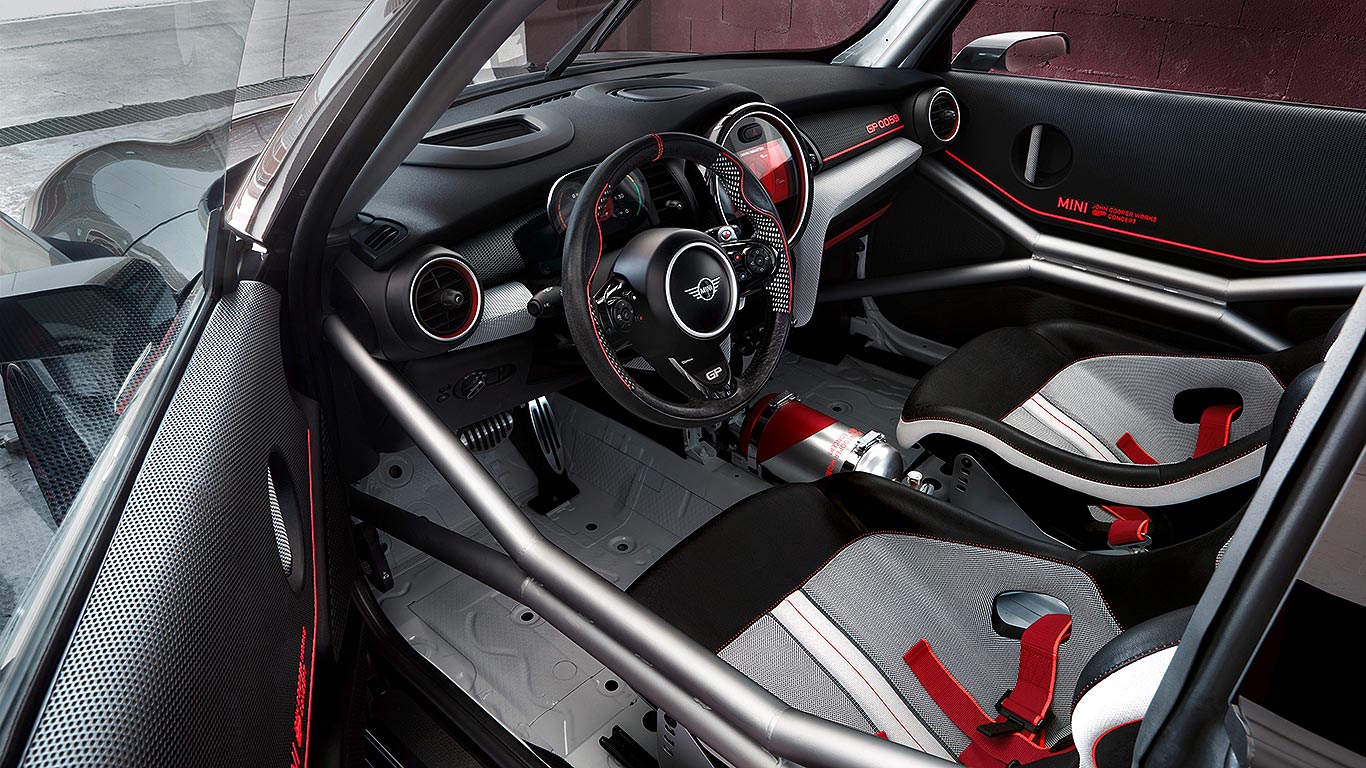 Inside, it’s been stripped out, with key elements being the roll cage, the ultra-low-set front buckets with five-point harnesses, and a race-style TFT instrument display ahead of the driver – just like the Mini Challenge racing cars. You don’t even get a roof liner or door panels, but you do get an emergency cut-off button within an otherwise-digital interior.

How do you open the doors? With fabric strips, before then clamouring through the opening in the roll cage, “in typical racing car style”. As with the Mini Electric Concept that’s also headed to the Frankfurt IAA, liberal use of 3D printing and 3D knitting tech is exhibited throughout the Mini John Cooper Works GP Concept. 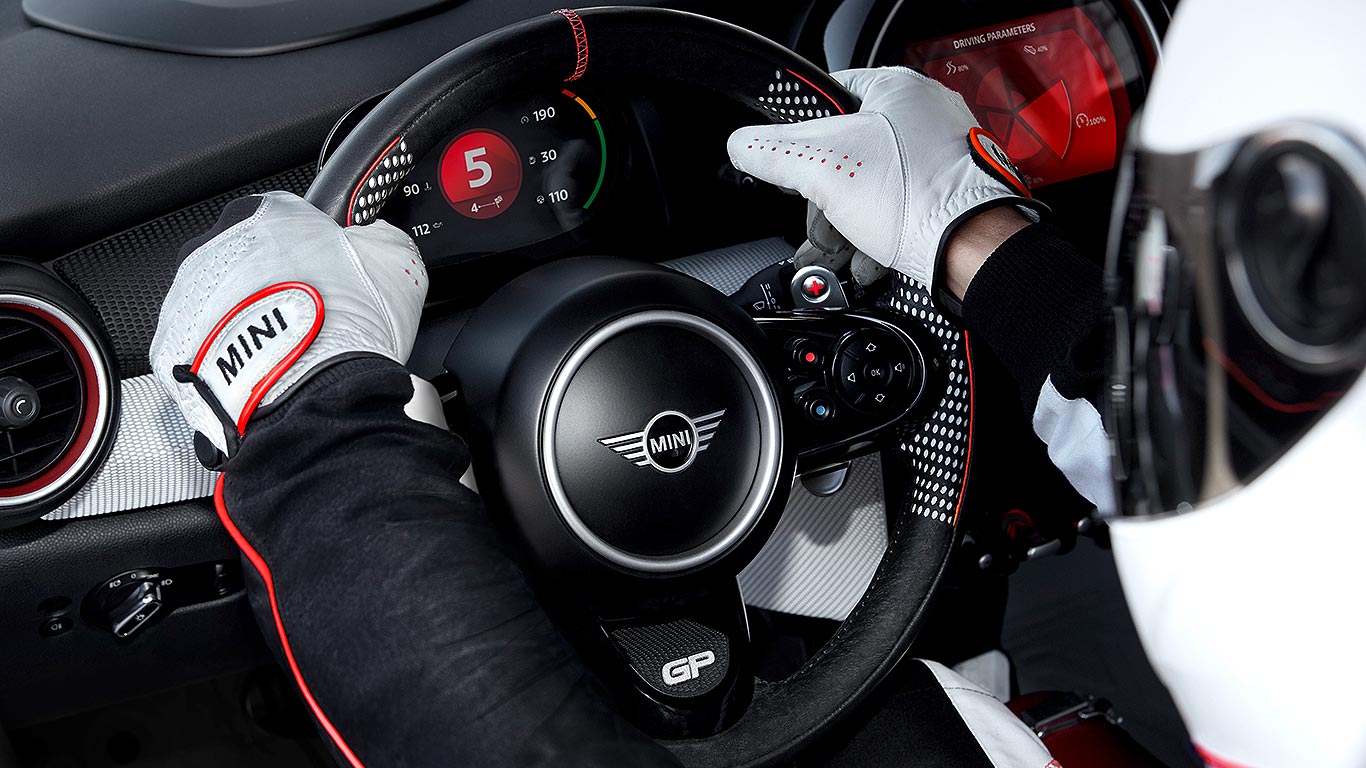