Take a step back in time with the craziest cars of the 1970s at the 2017 Frankfurt Motor Show, including a widebody Ford Capri and Mercedes 190 cabriolet 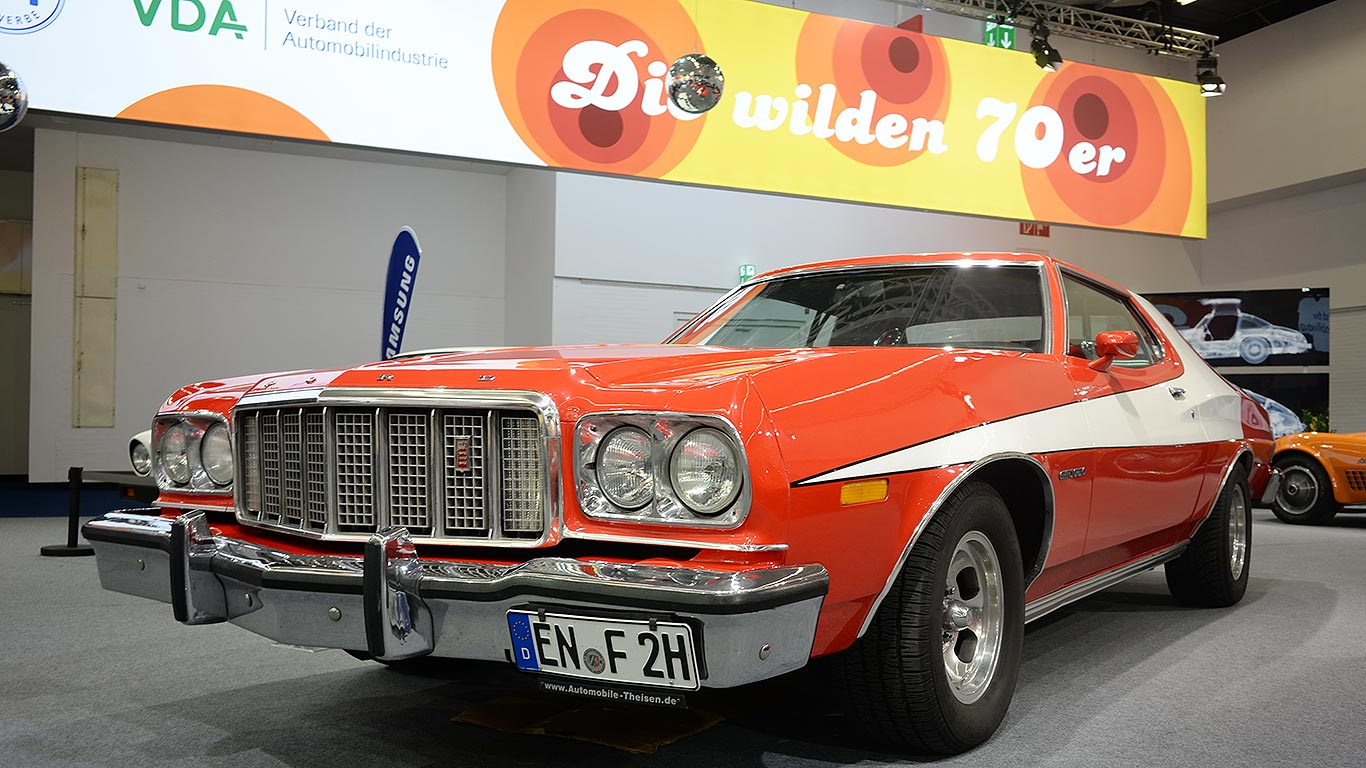 The Frankfurt Motor Show might be chiefly focused on modern machinery, but retro cars haven’t been forgotten. The questionable creations of the 1970s and 80s have their own display for 2017, so dig out your chest wig and flares. Here we go! 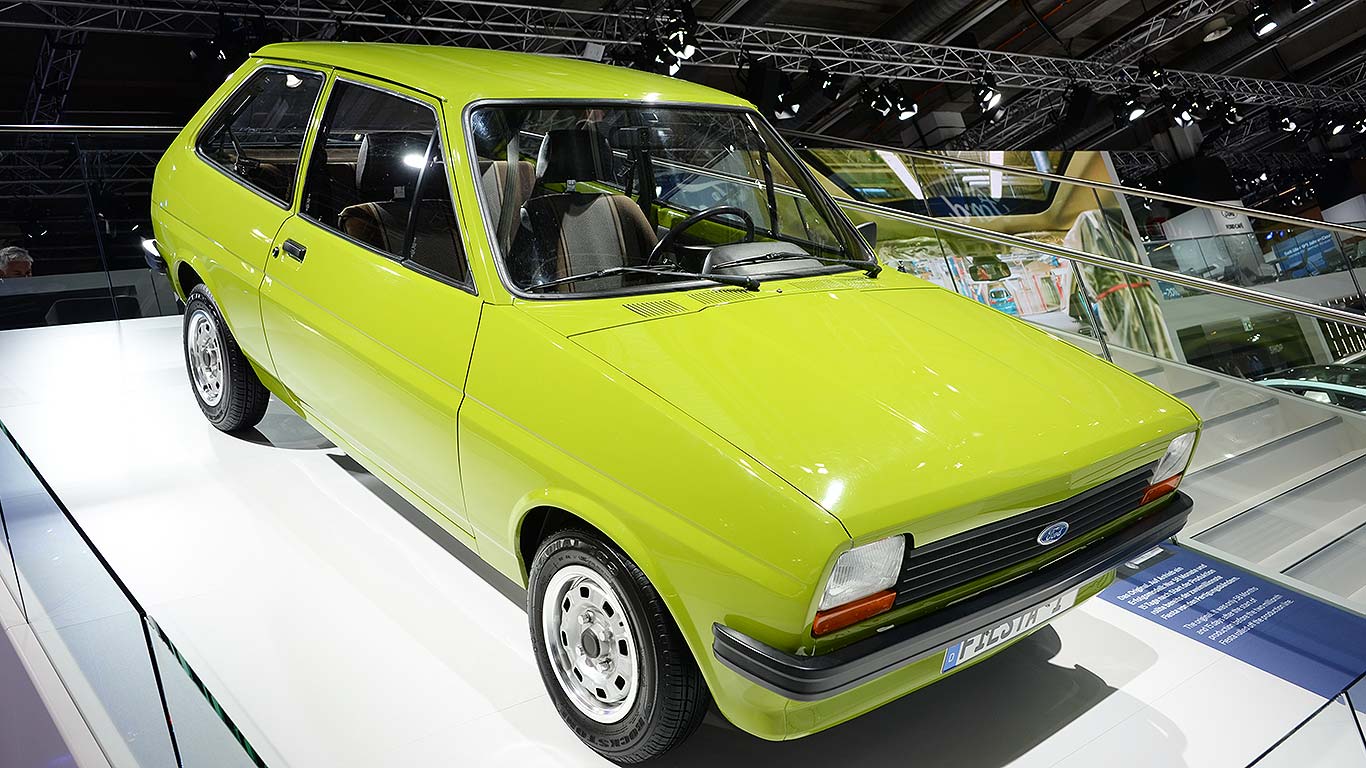 The original Fiesta might be a genuine classic, first launched in 1976, but that doesn’t excuse the extremely ‘1970s’ paintwork here. This shade of green appeared on a number of Ford products during the decade and certainly made the Fiesta stand out in the Frankfurt show hall.

Questionable colour aside, the Mk1 Fiesta was a hit for Ford, taking less than five years for production to exceed two million cars. In the UK, the Fiesta raced to the top of the charts as the best-selling supermini. 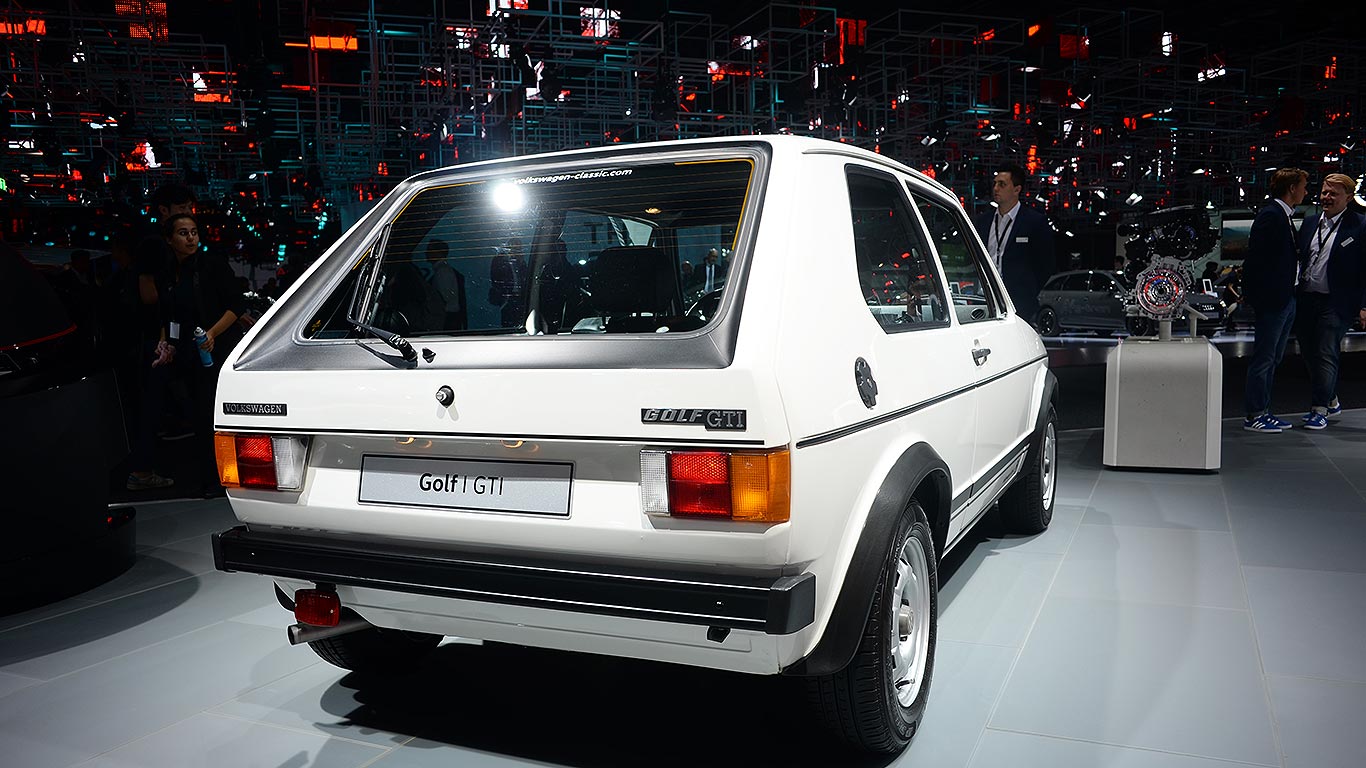 Although it might not have been the very first hot hatch on the market, the original Golf GTI is the one associated with defining the genre. Its power output isn’t even ‘warm hatch’ standard today, but modern cars like the Golf R and Ford Focus RS owe a lot to it.

Compared to current hot hatches, the exterior changes to the Mk1 GTI were minimal. A thin red stripe around the grille was the most obvious sign that this wasn’t a regular 1.1-litre version. Inside, the tartan-trimmed seats certainly made a statement, and continue to be copied to this day in hot Volkswagens. Proof that not everything retro has to be tacky. 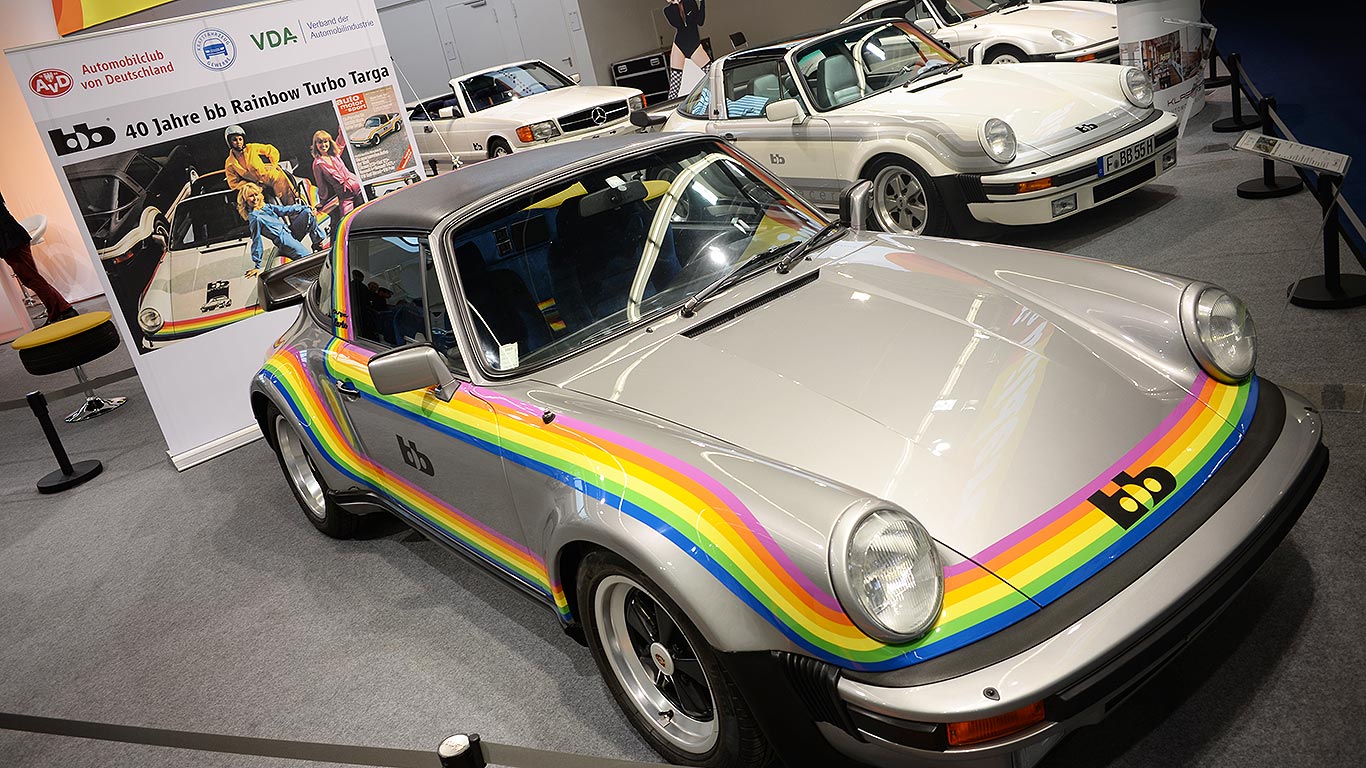 It doesn’t get much more 1970s than this. Rainer Buchmann built a reputation during the decade for tuning and customising Porsches. The Turbo Targa Rainbow was built in 1976, and used to promote the Polaroid camera brand, hence the colourful livery.

With some 300hp, the B&B 930 Turbo had more than enough power for the late 1970s, but matched that with equally outlandish options. Bright velour upholstery was a favourite of the company, while big speakers and CB radios were also on the options list. Imagine Pimp My Ride, but set in West Germany four decades ago. 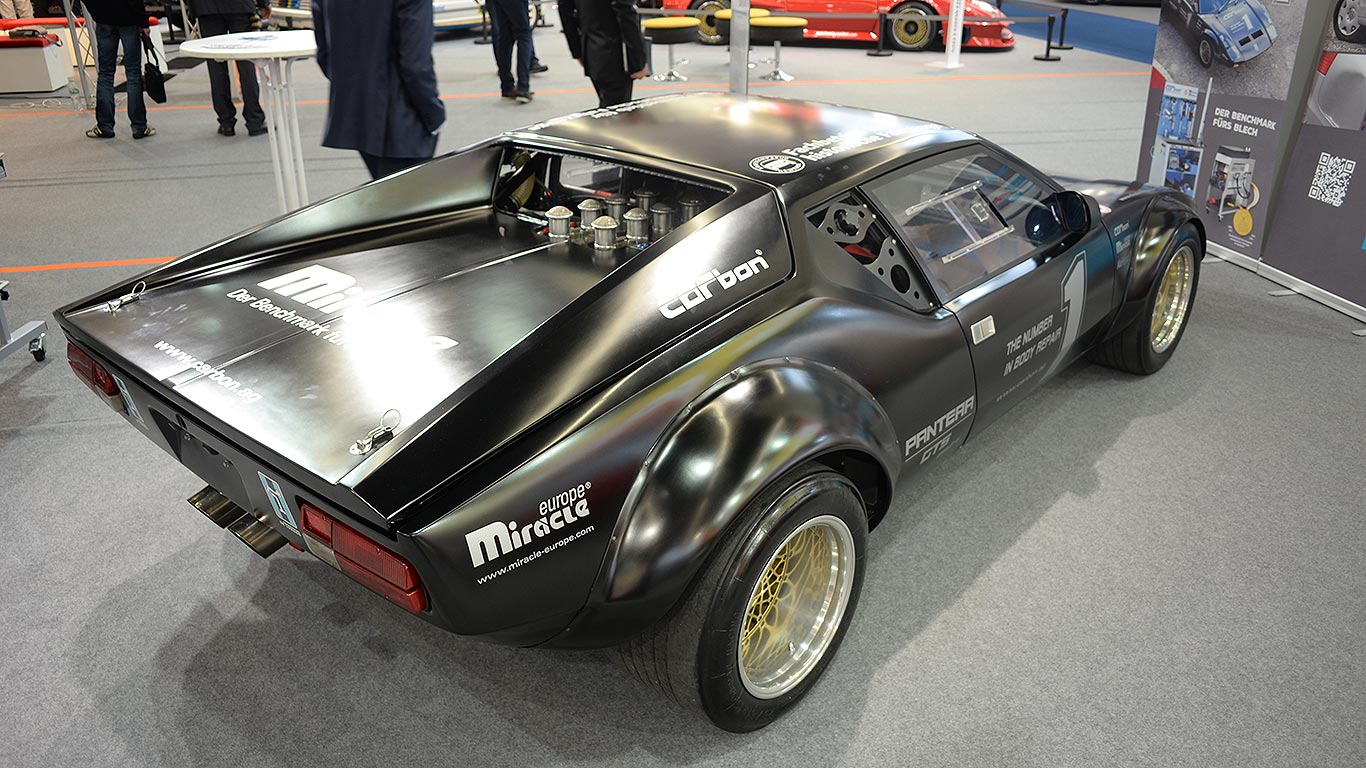 If it’s good enough for Kenny Loggins to sing about in his 1979 song ‘Mr Night’ then it’s surely good enough to be included in any retro collection. First shown at the 1970 New York Auto Show, and put into production the following year, the Pantera was powered by a 5.8-litre Ford V8 engine with 330hp.

Ford was heavily invested in the Pantera project, and even imported the car to be sold alongside Lincolns and Mercurys in US dealerships. The Blue Oval dropped the Pantera in 1975, but the car carried on being produced until the early 1990s, having endured multiple facelifts and modifications. 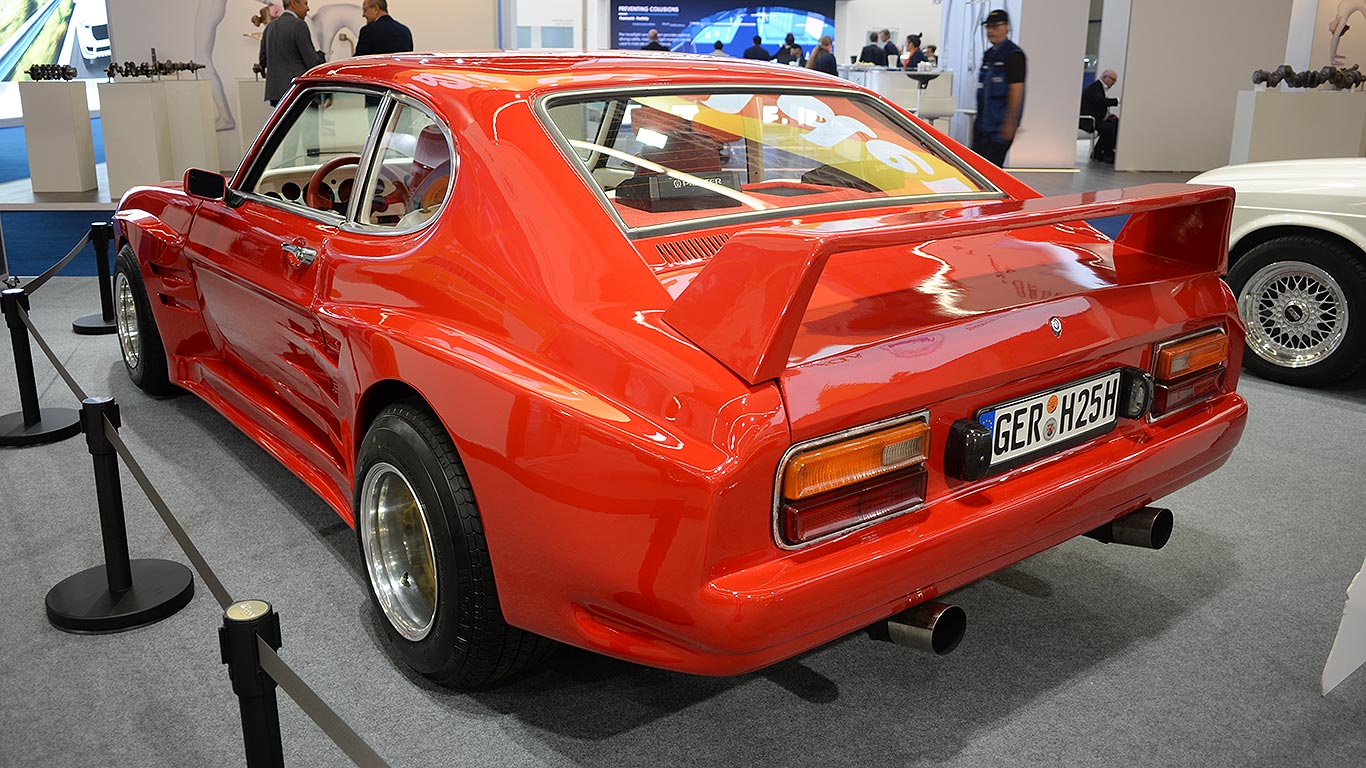 It may have been introduced in 1969, but nothing embodies the idea of European motoring in the 1970s more than a Ford Capri. The rear-wheel-drive coupe was as close as buyers on this side of the Atlantic could get to American muscle, and the blue collar two-door attracted modifications aplenty.

From the furry dice and white leather upholstery inside, to the widened wheel arches and boot spoiler outside, this is clearly not a regular Capri. It might not be as extreme as some of the racing Capris of the time, but it still looks muscular today. 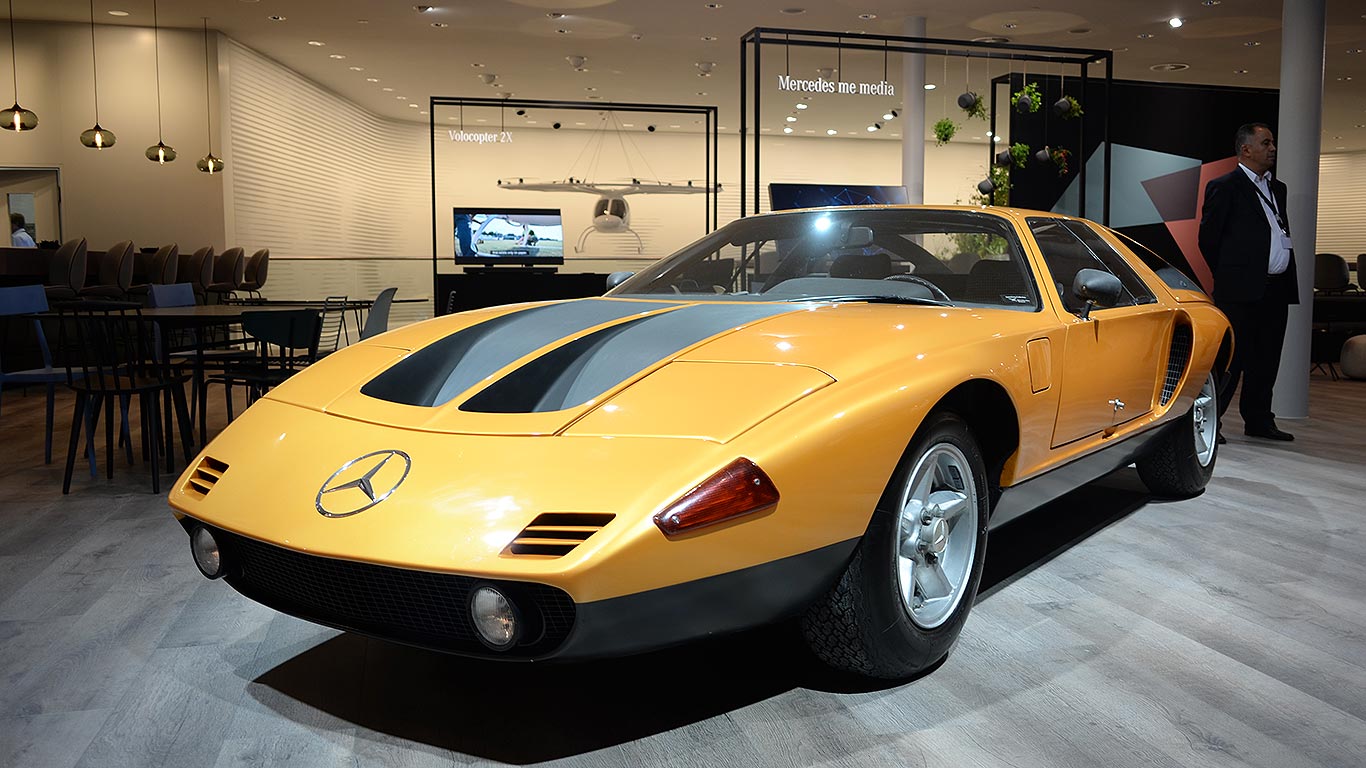 In many ways, the Mercedes-Benz C111-2 was the AMG Project One of its day. The original C111-1 of 1969 used a three-rotor Wankel engine developing 280hp, while the four-rotor C111-2 upped the ante with 350hp. This thing could reach speeds of 217mph, which, in its day, was as eye-opening as the Project One’s performance figures are now.

When it comes to iconic TV vehicles, the Ford Gran Torino is up there with the General Lee and the A-Team van. The famous red Ford with the distinctive white stripe was driven by David Starsky and given the nickname ‘Striped Tomato’ by his partner in anti-crime, Kenneth Hutchinson.

A number of cars were used during the filming of the hit 70s cop TV show, but – much to Starsky’s disgust – damage during the call of duty was a regular problem. Often, repairs would take place between filming, to varying degrees of success. Watch episodes filmed towards the end of the first series and it’s not hard to spot the low-rent repair jobs. 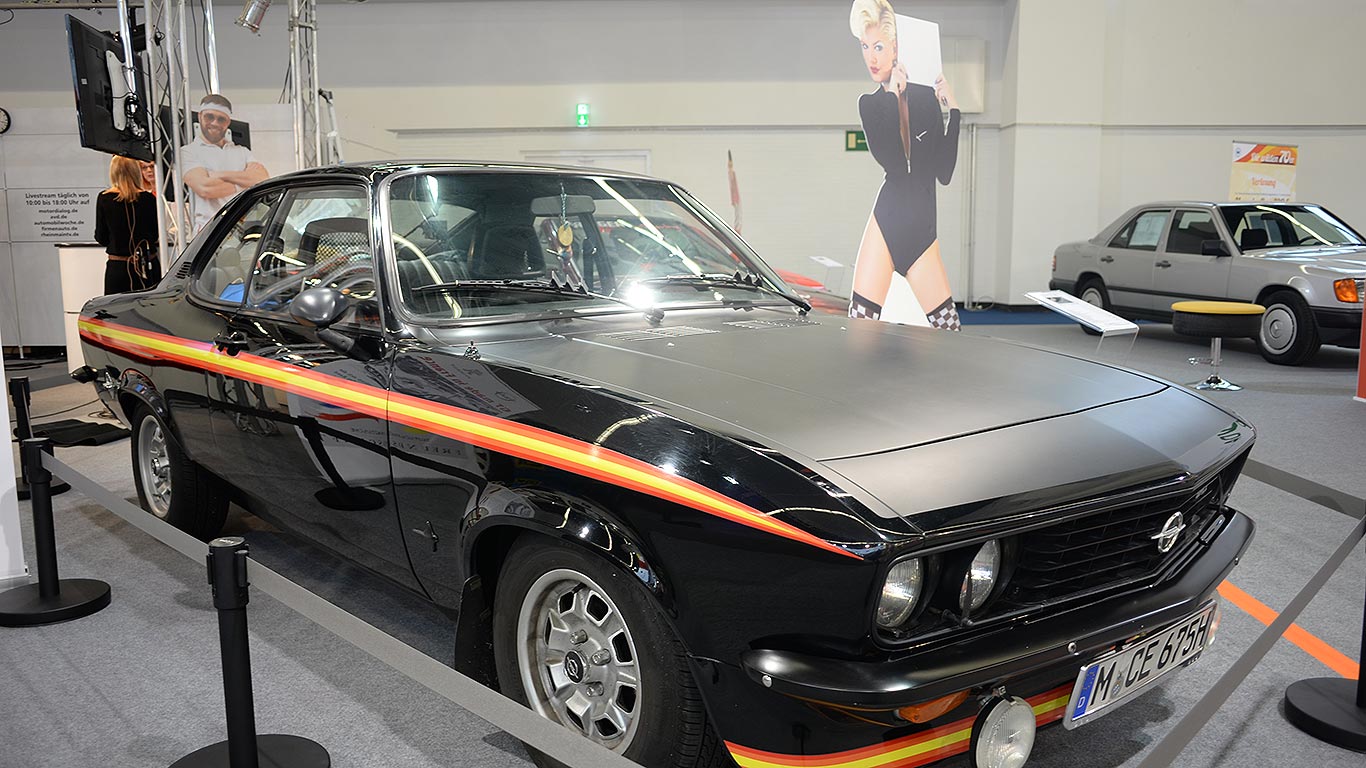 The Manta was Opel’s answer to the Capri, launched a year after its Ford a rival and two months ahead of the Ascona upon which it was based. Like the Capri, it was a two-door coupe with space for four adults, and some 500,000 units were built before it made way for the more familiar Manta B in 1975. 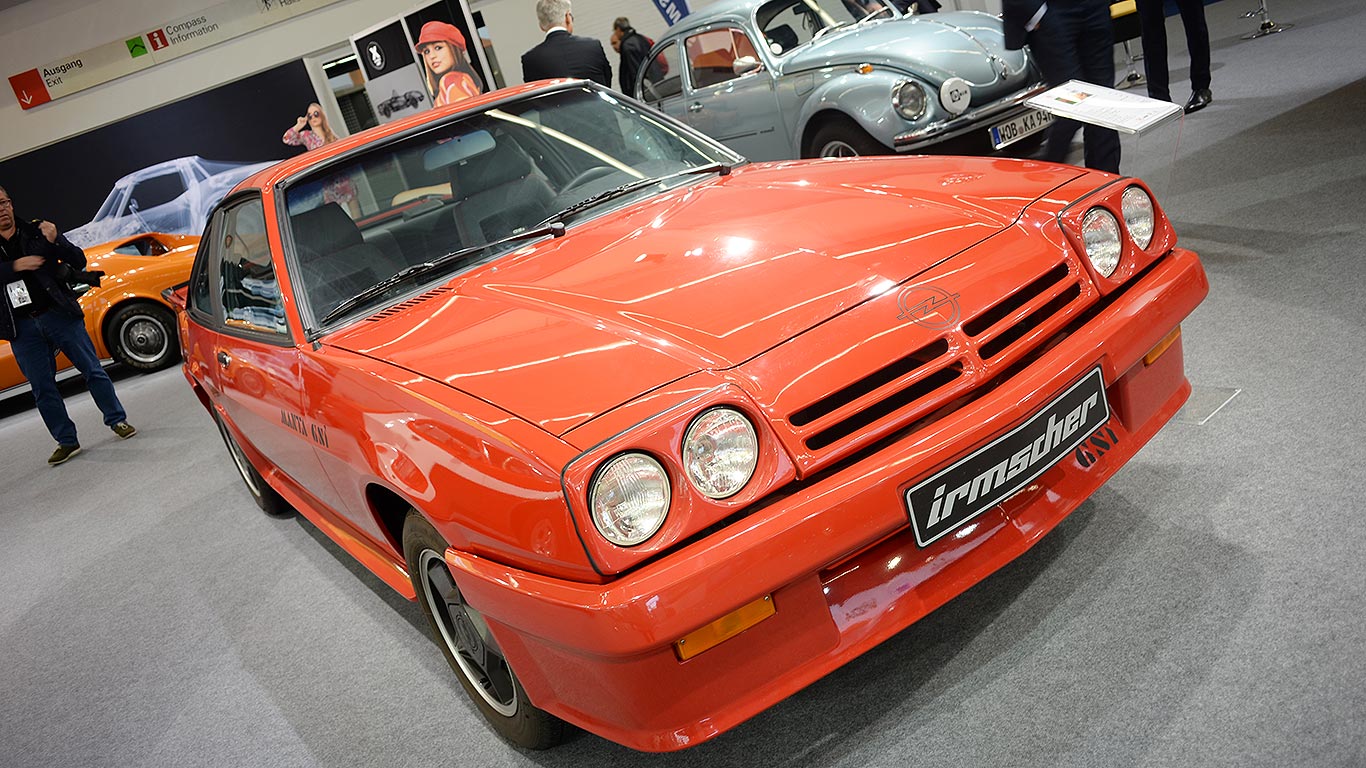 Although the Manta B was launched in the mid 70s, it morphed into something perfectly in-tune with the 1980s. In fact, nothing screams 80s quite like a red Opel Manta GSi with a body kit supplied by in-house tuning arm, Irmscher.

While the Ford Capri developed an unfortunate image crisis in its later life, the Opel Manta largely escaped the gold medallion and hairy chest tag. At least it did in the UK, but the role was reversed in Germany, where the Manta became a little low-rent, especially when viewed alongside the emerging hot hatches of the day. 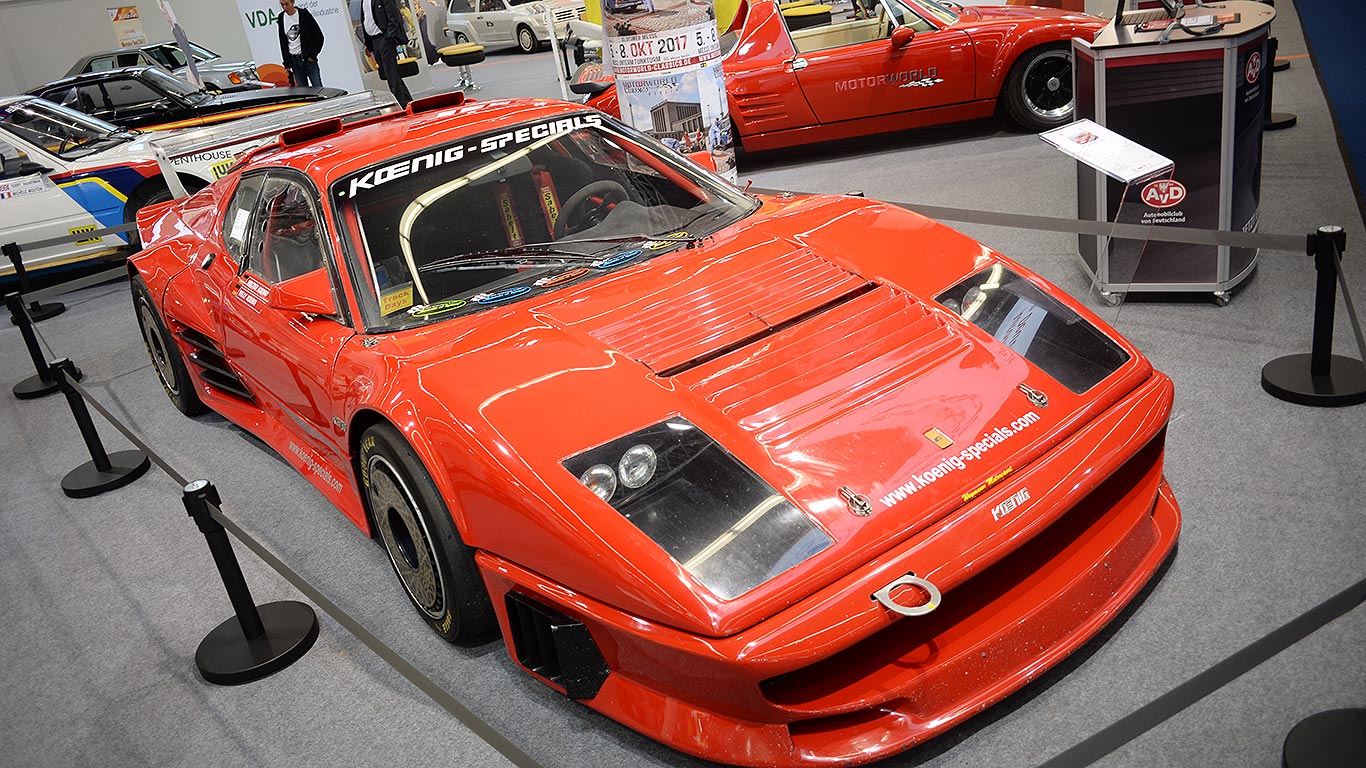 Koenig created some of the wildest modified supercars throughout the 1970s and 80s. Unhappy with the flat-12 engine fitted to the Ferrari Berlinetta Boxer, Koenig added performance parts culminating in a 600hp+ twin-turbo conversion. Fibreglass widebody kits and spoilers were part of the deal, too. 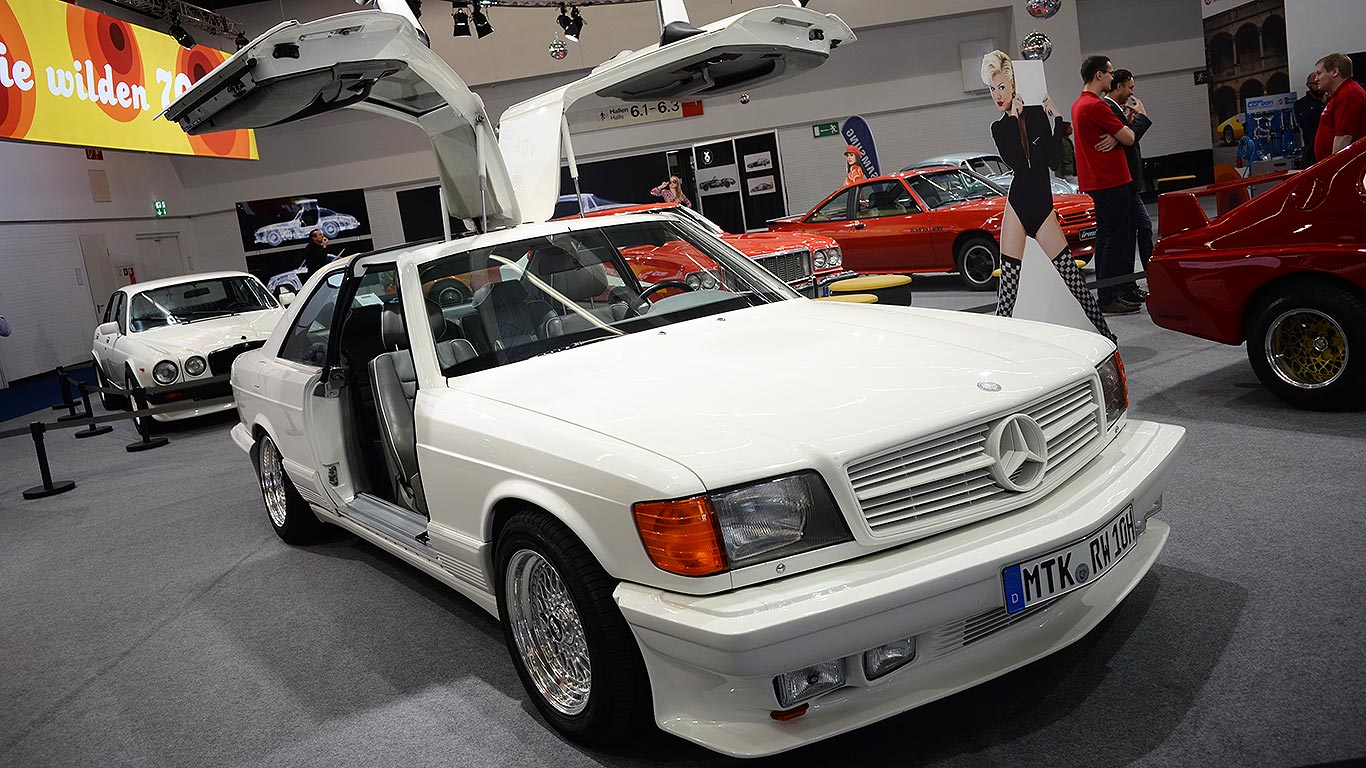 To truly be down with the kids in the early 1980s, you needed to fit your already expensive Mercedes 500 SEC with a set of gullwing doors. Numerous tuning companies offered the conversion, with only the mildest of resemblance to the 300 SL from the 1950s. The only rule was that it needed to be white, to get the full 1980s effect. 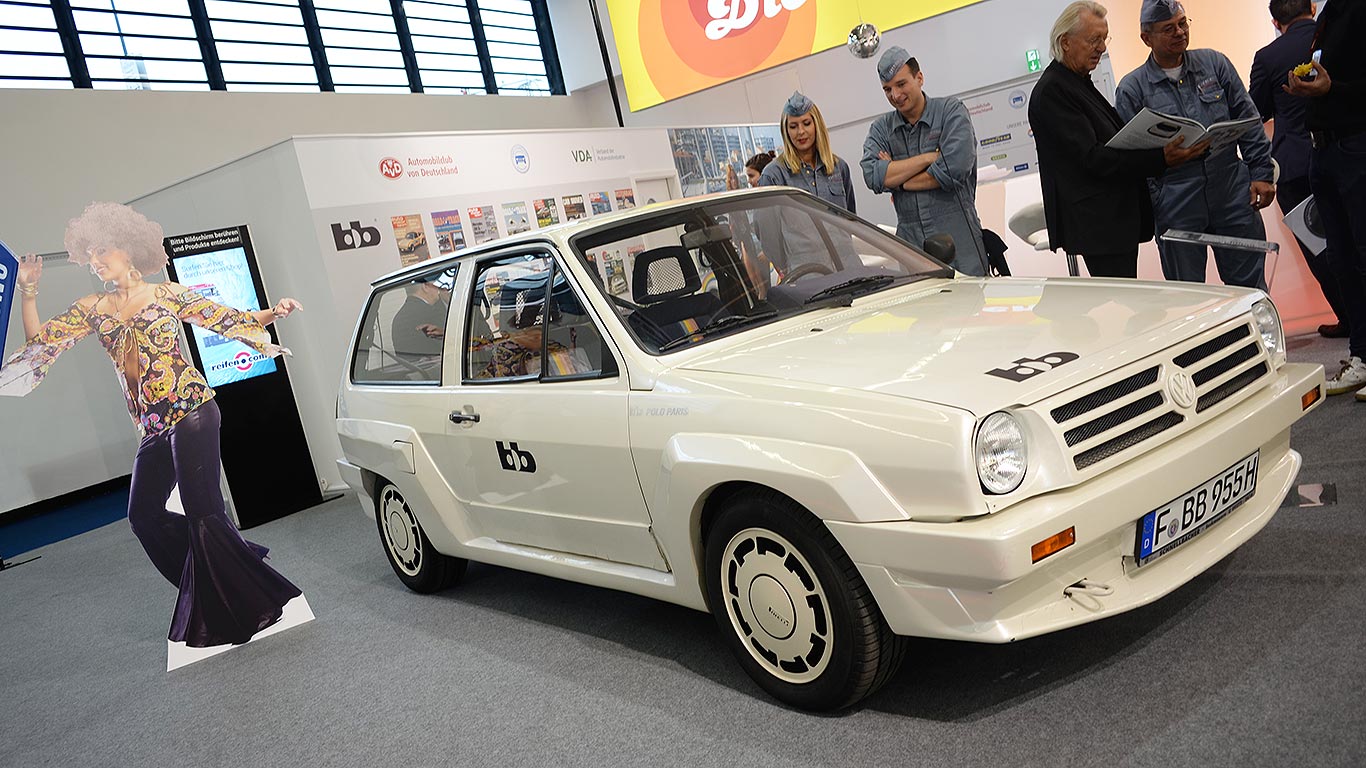 Rainer Buchmann didn’t just modify Porsches: even the humble Volkswagen Polo came under the spotlight of the B&B team. The Polo Paris was, according to the company, designed to show off feminine elegance and understatement. Apparently that translates into a boxy bodykit, Alcantara interior and 16 speakers for the Blaupunkt stereo system. 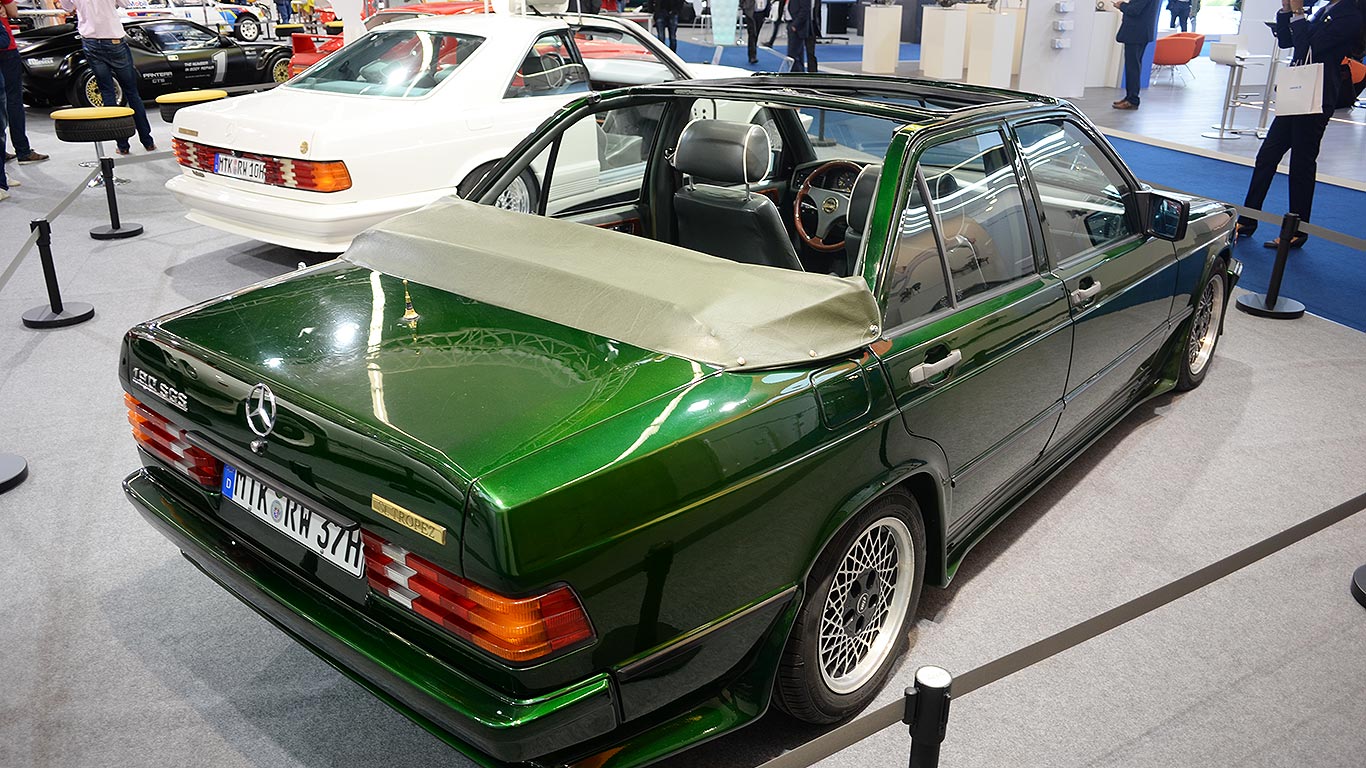 Here’s something you don’t see everyday: a Mercedes-Benz 190E ‘St Tropez’ built by German tuners Styling Garage, or SGS. A quick internet search suggests only five were ever built and two, possibly three, remain in existence. You know when you shouldn’t like something, but you can’t help but nod in approval. Yeah, that.

In 2014, one was sold in Hamburg for £15,000, and the chances are it’s the one on show in Frankfurt. SGS began life as a workshop, before expanding into coachbuilding, with clients in the Middle East. Sadly, in 1986, the company was declared bankrupt. It’s fair to say that nobody at Mercedes-Benz shed a tear, with Stuttgart seemingly unimpressed with the firm’s creations. 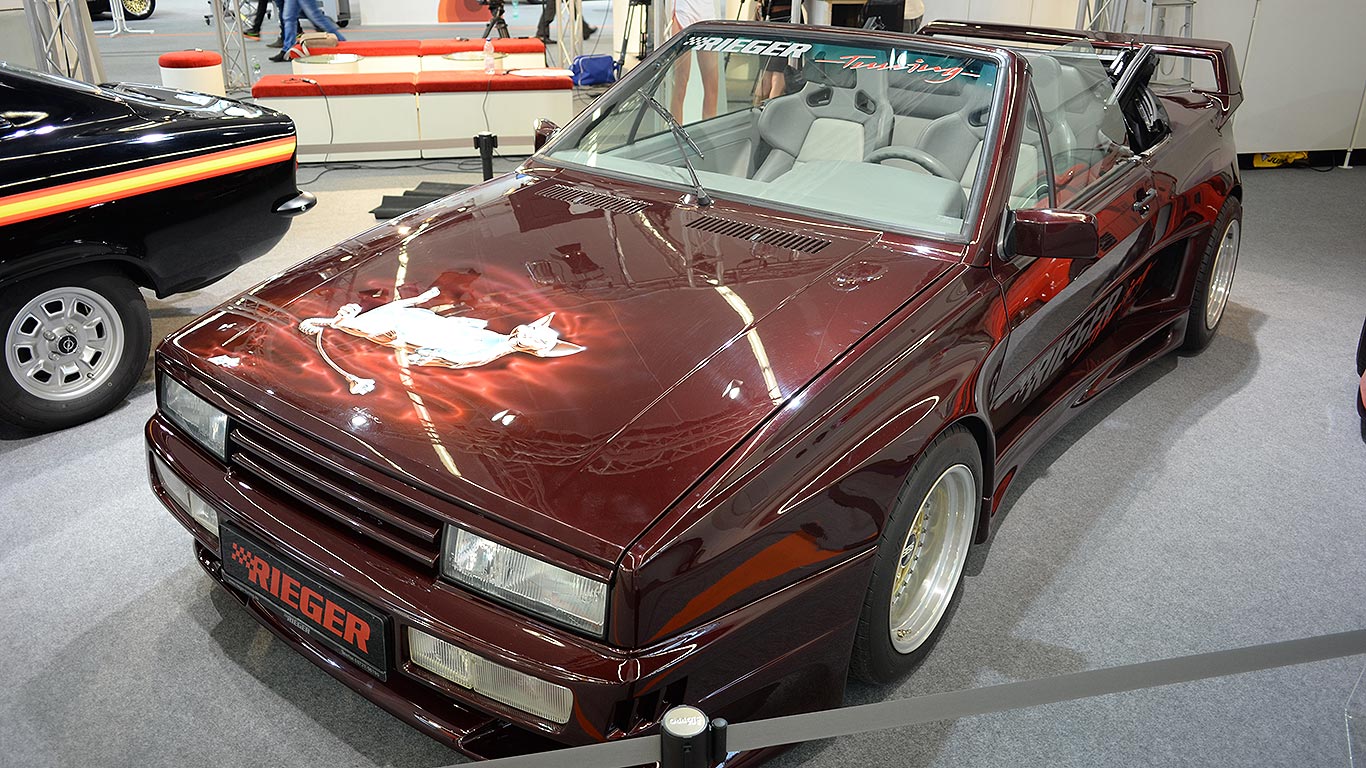 Some things, like the Volkswagen Corrado, are best left alone. Two decades on from the end of production, the Corrado remains one of the best looking cars ever to wear the VW badge, but that doesn’t stop people from messing with it. This Rieger conversion is an acquired taste, as is the bonnet detailing. 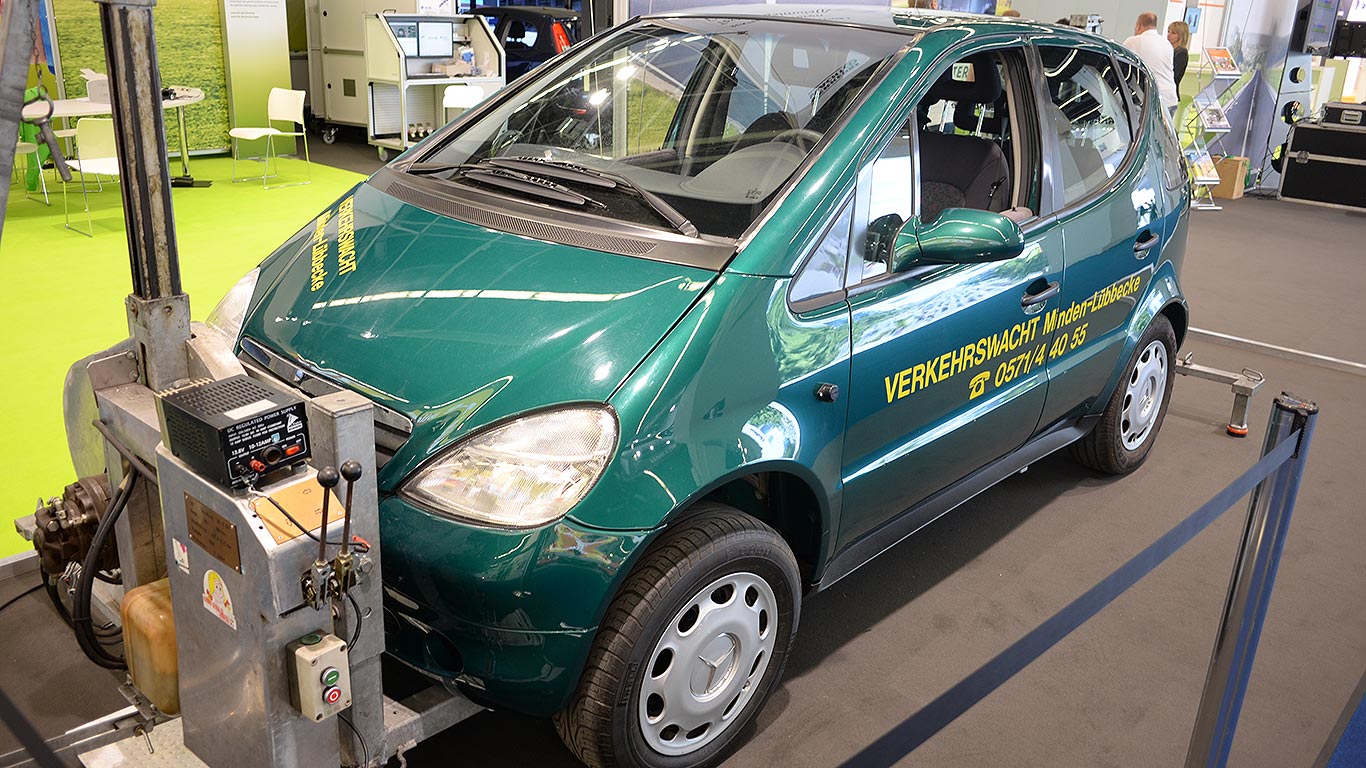 Too soon to class the Mercedes-Benz A-Class as ‘retro’? It might surprise to learn that the baby Merc, the company’s first front-wheel-drive car, turns 20 in 1997. It’s fair to say Stuttgart won’t have fond memories of the A-Class, with the car famously failing the Swedish ‘Elk’ test, highlighting a severe stability problem. Worse was to come, with development costs resulting in losses of around €1.7 billion.

Here is the Hyundai Kona Hybrid you’ve been waiting for

The new Hyundai Kona Hybrid will offer CO2 emissions of 99g/km and 66mpg fuel economy when it goes on the sale in the UK this summer.
Read more

Does turning the clocks back cause road traffic accidents?

RoSPA is calling once more for the clock change to be scrapped, claiming darker evenings are directly related to more accidents.
Read more