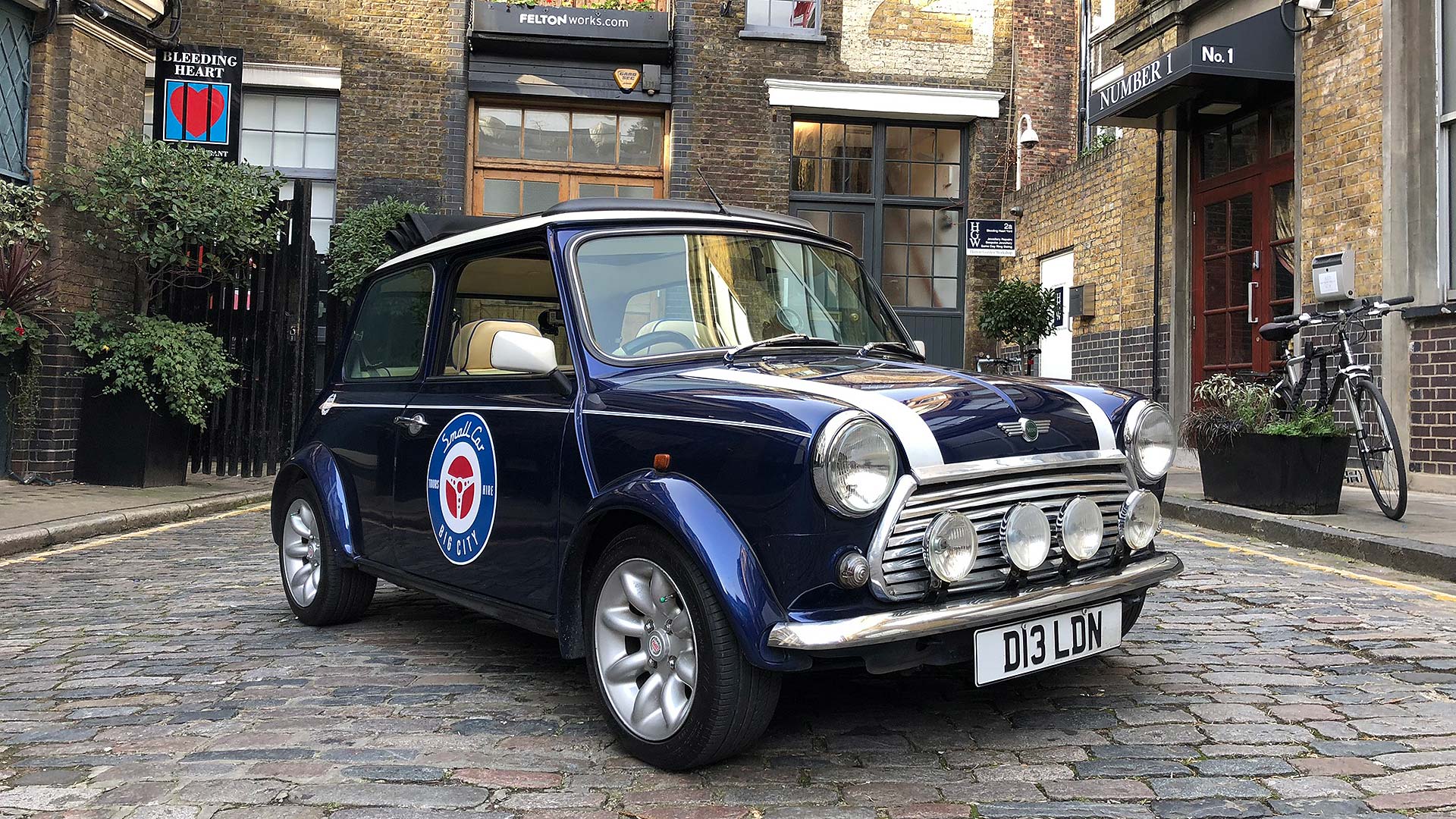 Think of London in the swinging 60s and it won’t be long before a Mini zooms into your mind. The little car, born as an economy special in 1959, was quickly reinvented as an icon of cool, equal to the Beatles (who famously all owned one). What better way, then to remind ourselves what makes the Mini great than an adventure through central London?

It’s been decades since I drove a Mini, after learning to drive in one when I was eight (amazing what you can do on private land). Even the Mk1 Ford Fiesta we traded up to back in 1992 felt like a huge step up; today, original Fiestas feel tiny. And the Mini? Microscopic. 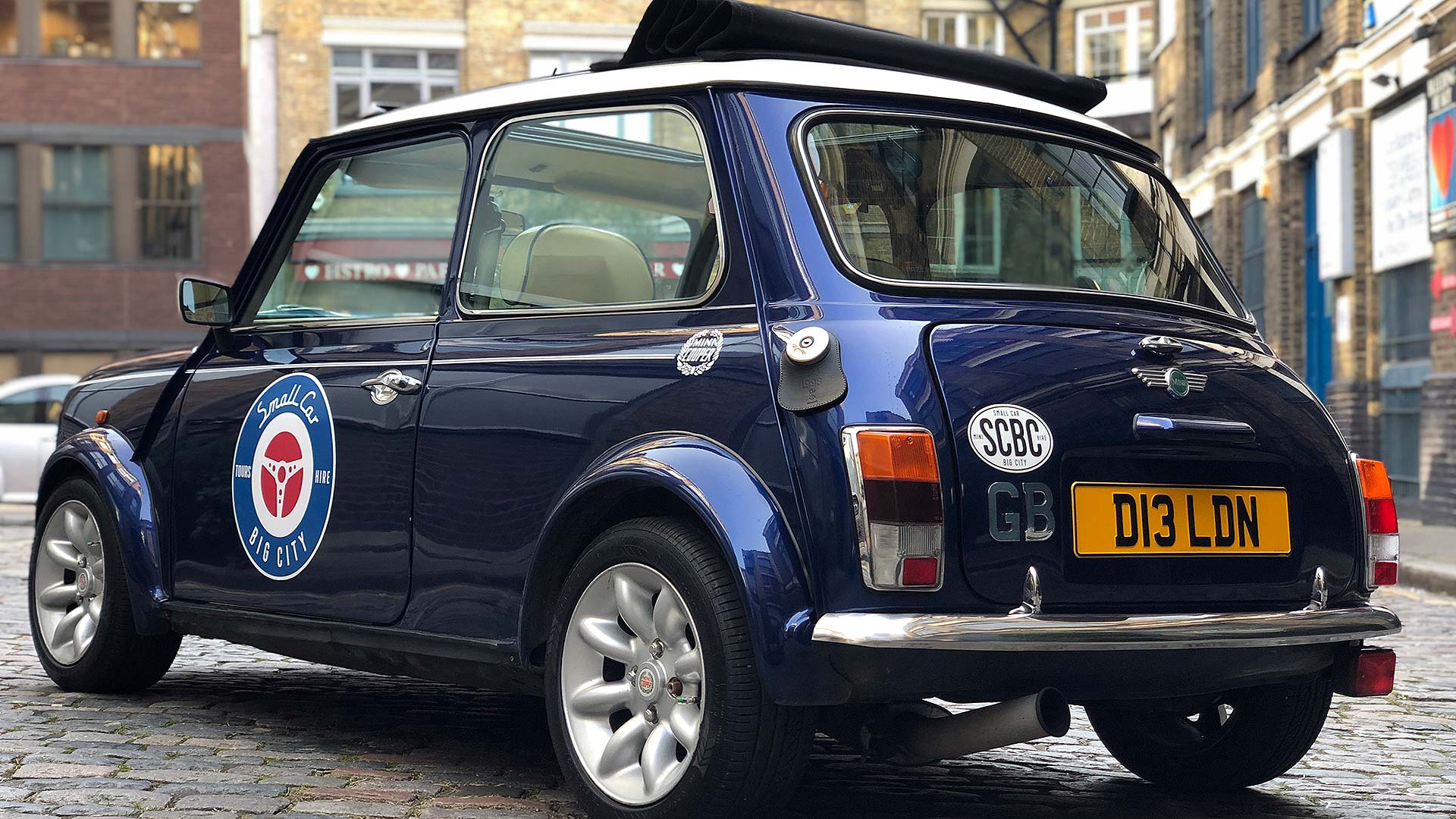 As we stood by the blue 1998 Cooper, I felt like a giant, who could almost pick it up with two hands. Modern cars make original Minis seem like toys. I bent down to push in the cool metal button on the door, and pulled open a wafer-thin piece of metal. Crash safety? Best not ask. Later Minis had side impact bars; goodness knows how they squeezed them in, or what benefit they could possibly bring.

Getting into a Mini is like climbing aboard a go-kart. It’s awkward, you need to be limber, and you drop down much longer than you expect before your bum hits the seat. At my first go, I got my knee trapped under the steering wheel, and was literally stuck solid. A sideways bash with my fist released it and, once the pain subsided, I surveyed the interior.

Our Mini was an original, with the centre speedo. Posh 70s Clubmans had offset dials, and enviable 1275GTs had a three-pack set including a rev counter. This leather-lined later model carried the original Clubman dash, with the added dials, wood veneer and Metro column stalks Rover added in the late 1990s. The acutely-angled steering wheel was even given an airbag, another minor sign of modernity in a classic car cabin. 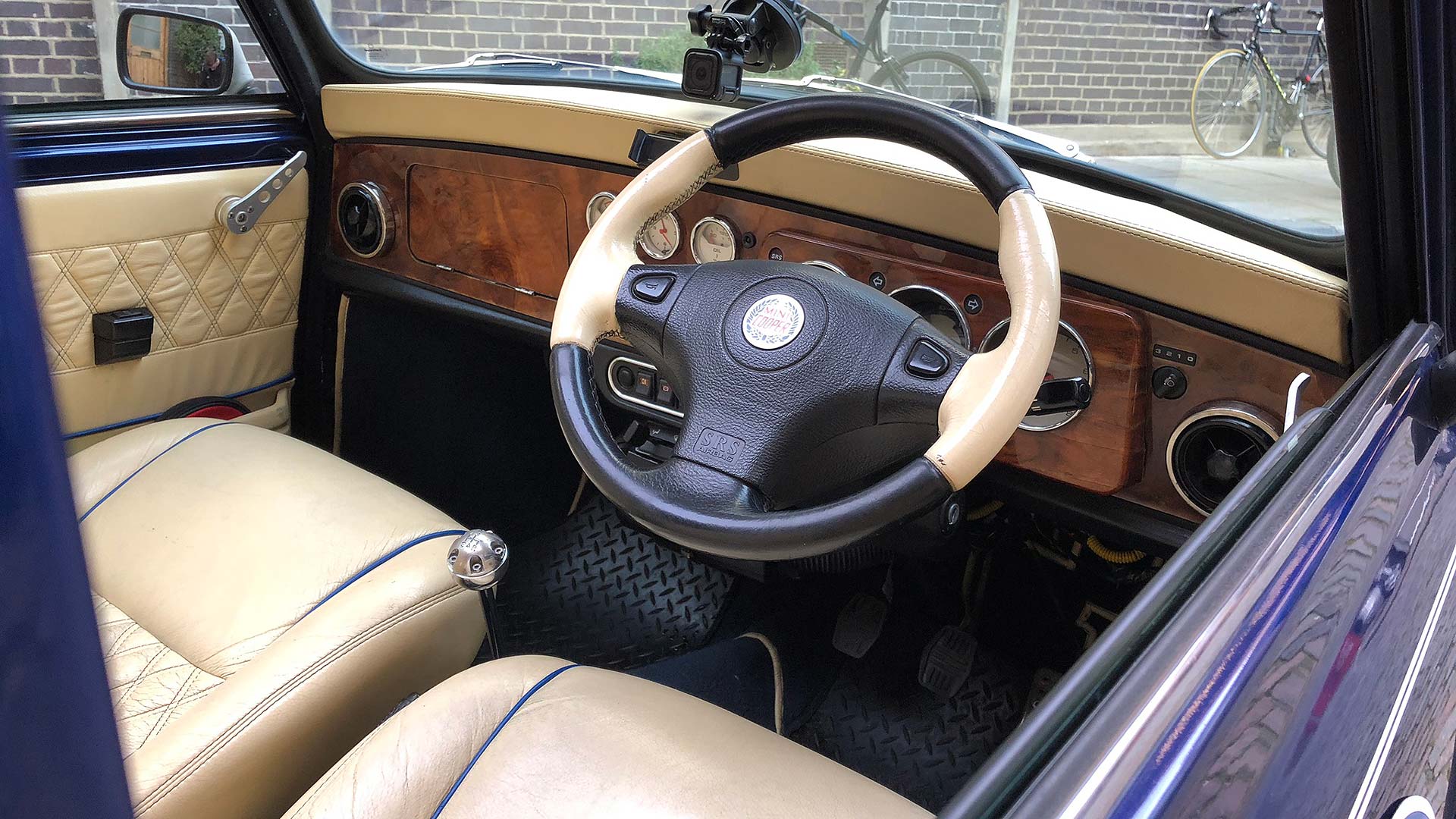 Archaic, then, but full of character. After doing what everyone does when they get into a Mini for the first time – trying to move the seat back, only to find that’s as far as it went – I whirred the starter motor and fired the classic A-Series engine into life. Fuel injection meant it started cleanly, but that’s about it for mod-cons.

A heavy, short-travel clutch matches the heavy, short-travel brakes, which complement the heavy non-assisted steering. Minis are tiny but it’s no small effort to drive one. Being sat almost on the floor, with other cars towering over you, is also different. You’re so low, you have to crane your neck just to enjoy the thumbs-up from those in the car next to you. But so little road does the Mini take up, you feel there’s always an escape route.

(The Minis driving across piazzas, down steps and through tunnels in the Italian Job could admittedly be a factor here. Perhaps best not to try any of that in London today.) 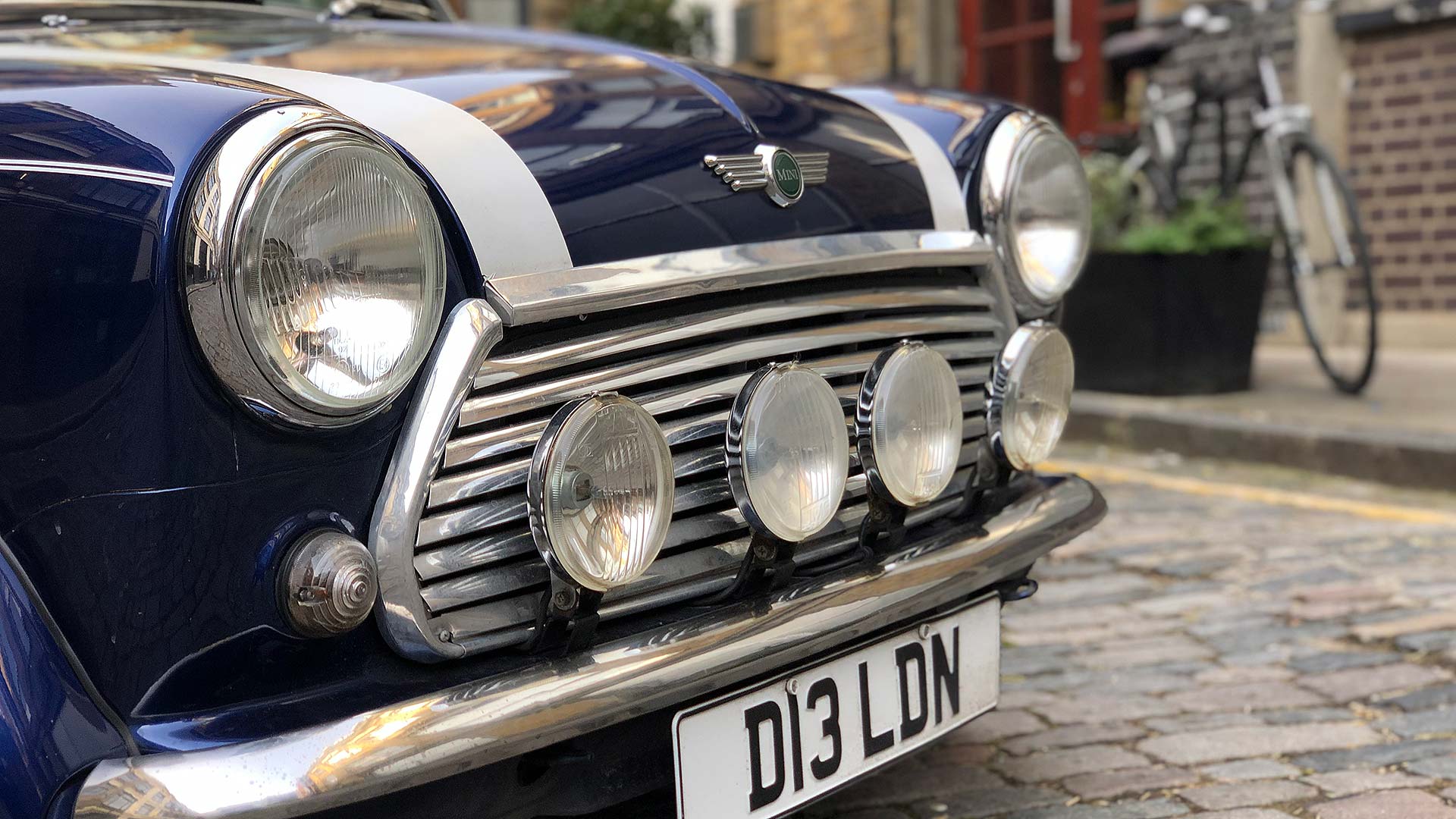 The engine is on your side, too. Unlike modern turbo units, it gives all its grunt virtually straight away – a bit like an electric car, albeit a noisy and throbby one. With the Mini’s lack of weight, it gives the car a great feeling of agility and energy, of little lost motion, as if it’s always ready to get up and at ’em.

As if this wasn’t exciting enough, then there’s the ride. Minis are bouncy cars, and you can see from the video how much I’m jostled about. Our videographer’s Vauxhall Corsa felt like a Rolls-Royce after a morning in the Mini. But it’s not actually uncomfortable, just lively, and this adds to the thrill and sense of spectacle when driving one.

Particularly as you are flooded with so much feel and feedback. Honestly, this is why everyone needs to drive a Mini at least once in their lives, just to feel how lucky racing drivers are to use cars that are so communicative. At all times, I knew exactly how much grip there was, and the state of the road surface below. The precision was incredible. The more I drove, the more confident I felt, and the more the Mini wooed and wowed me. 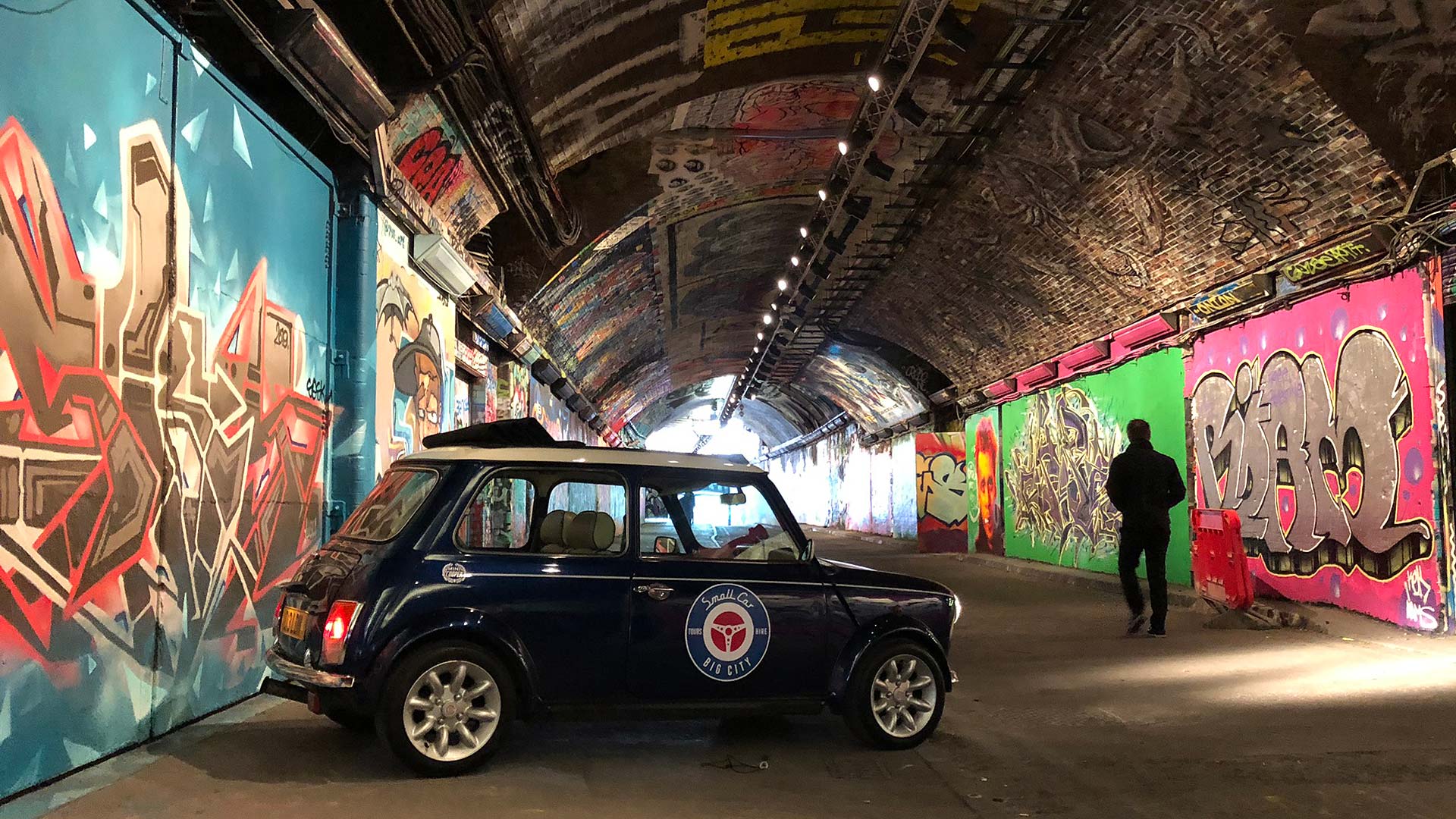 London had never been more fun. I can barely remember reaching fourth gear, but was still buzzing and mentally tallying up how I could own one. And all the fun I was having seemed matched by tourists and onlookers, revelling in the sight of a classic Mini being used just like it should be.

There’s a year of Mini celebrations ahead, starting at Excel in London. Nearly two decades after production stopped, it’s easy to forget how much fun the Mini still is, and how immense it must have felt in its 1960s heyday. For a morning, I put the mighty Mini back into London, and loved every minute. Sixty years on, it remains as magical as ever.

Thanks to Small Car, Big City for the loan of the Mini for the morning