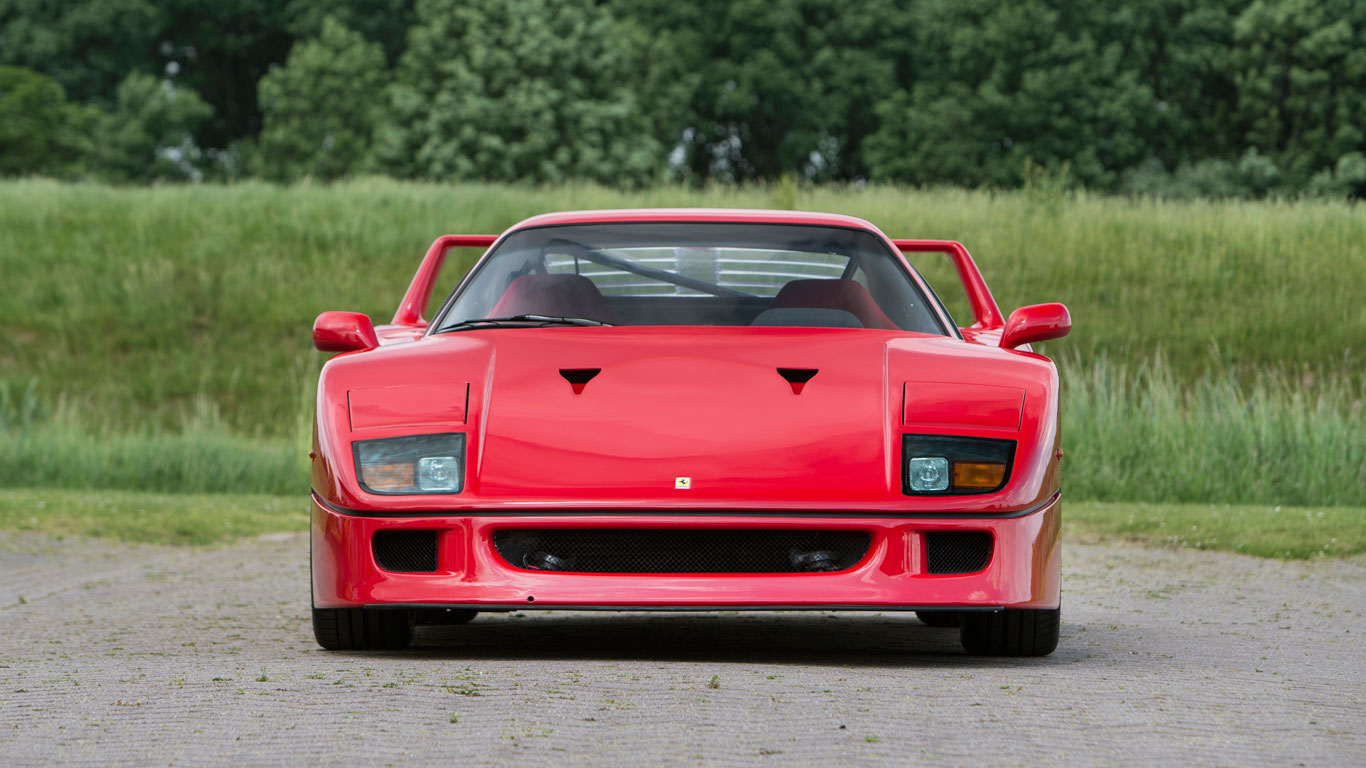 An ex-David Gilmour Ferrari F40, Sir Elton John’s ‘Nikita’ Bentley Continental and Peter Sellers’ Porsche 911 are the star cars on offer at the 2017 Bonhams Goodwood Festival of Speed Sale. The auction takes place on 30 June 2017 and we’ve selected a few of the highlights. Shine on you crazy diamonds… 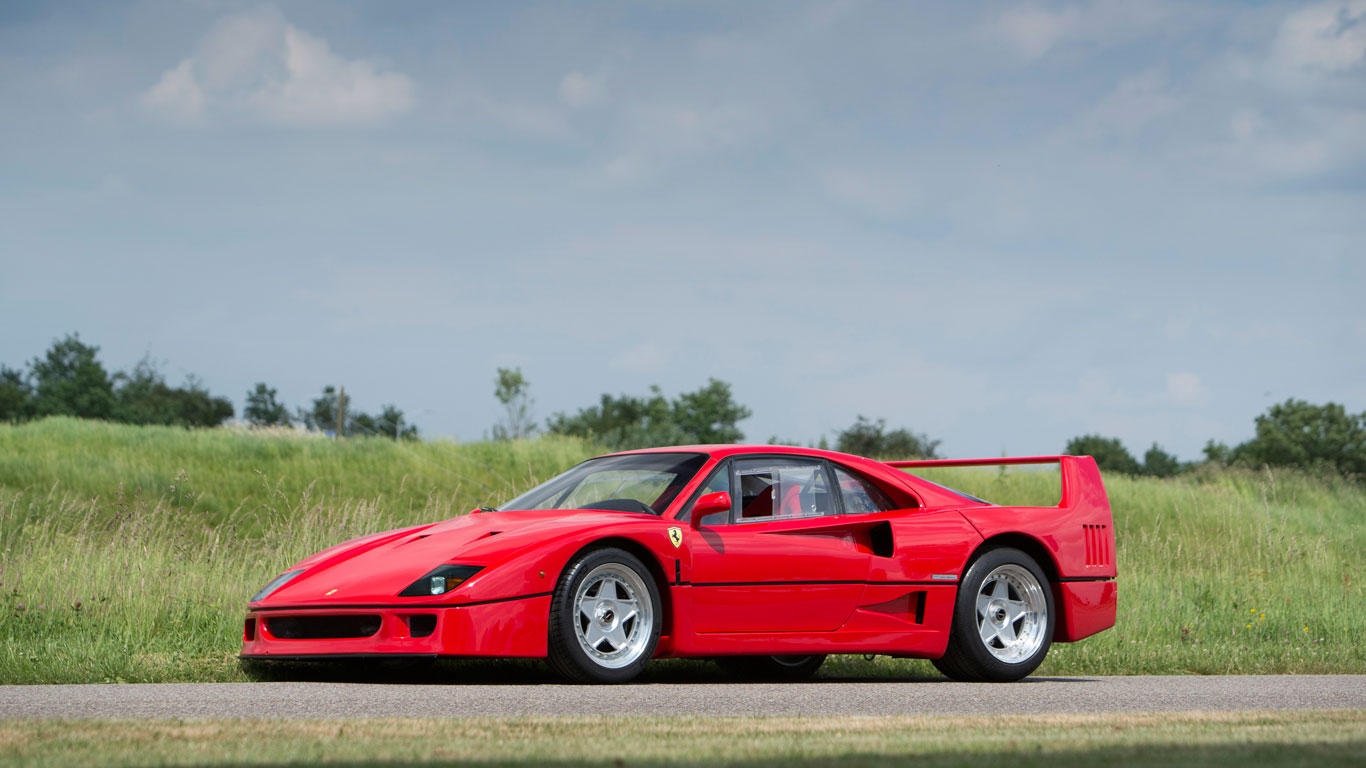 In 1988, Autocar reported that Pink Floyd stars Nick Mason and David Gilmour would be the first British customers to take delivery of a Ferrari F40. Both Mason and Gilmour collected their cars from Maranello and drove them back to the UK on Italian export plates. That’s not a bad way to say welcome to the machine…

Later, the F40s were displayed at the Birmingham International Motor Show, with Gilmour’s on the Pininfarina stand and Mason’s taking pride of place on the Ferrari stand. But while Gilmour was the original owner, the F40 has changed a little over the years. You could say ‘Time’ and ‘Money’ has been spent on this Ferrari.

Deep pockets are required, then, and although Bonhams hasn’t issued a pre-auction estimate, Eric Clapton’s old Ferrari F40 is currently up for sale for a cool £925,000. We’re not here to debate which F40 is best, but could you imagine the ‘guitar-off’ between Gilmour and Clapton? 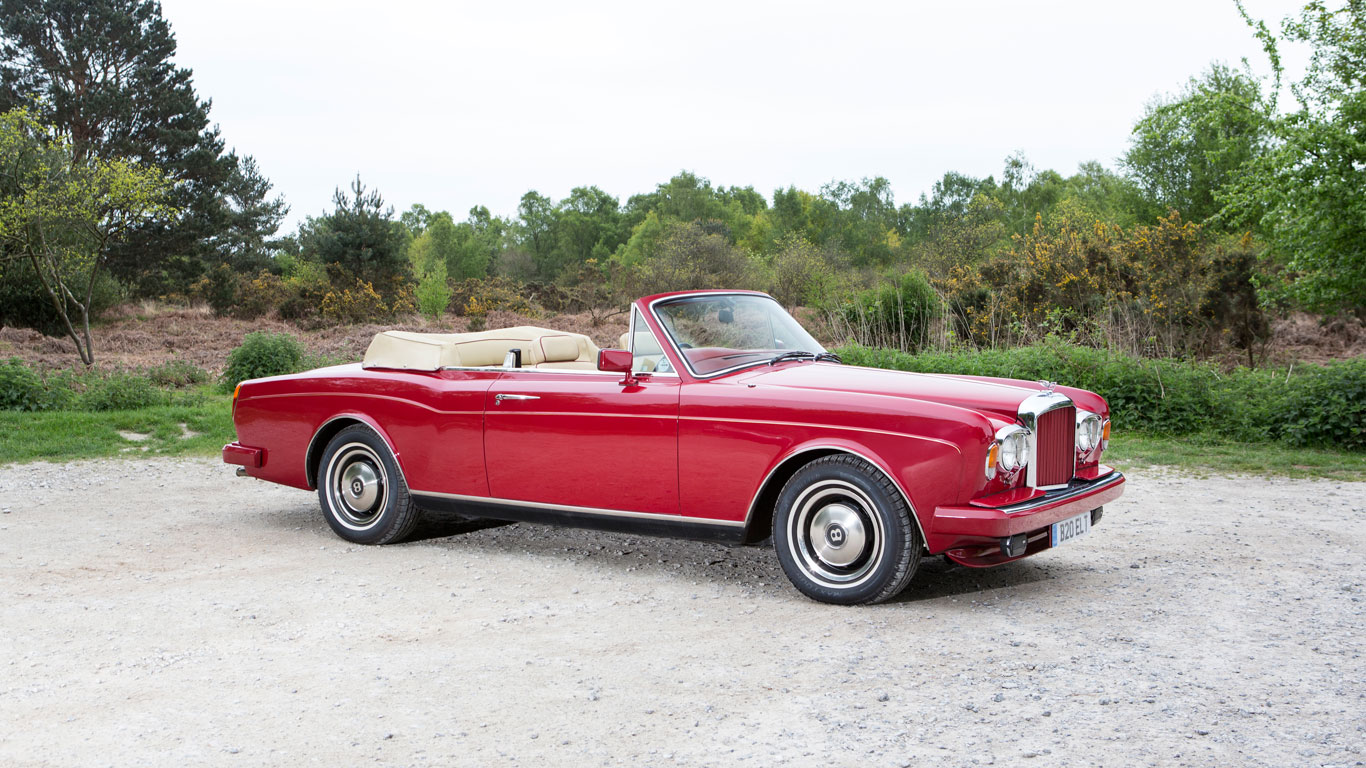 Sir Elton John’s Bentley Continental Convertible is a familiar sight on the auction circuit, having gone under the hammer at the Bonhams Paris sale in 2015. Then, it sold for £70,955 including premium.

Much work has been done since the car was purchased in 2015, including the fitment of the correct steel wheels. With this, the only deviation from the original specification is the boot-mounted CD changer and bass unit, which makes it the ideal car for cruising the Yellow Brick Road listening to Now That’s What I Call Elton John’s Biggest Hits.

Sir Elton has owned many desirable motors in his time, including a Jaguar XJ220 and an Aston Martin V8 Vantage, which was painted yellow and red to match the colours of his beloved Watford FC. 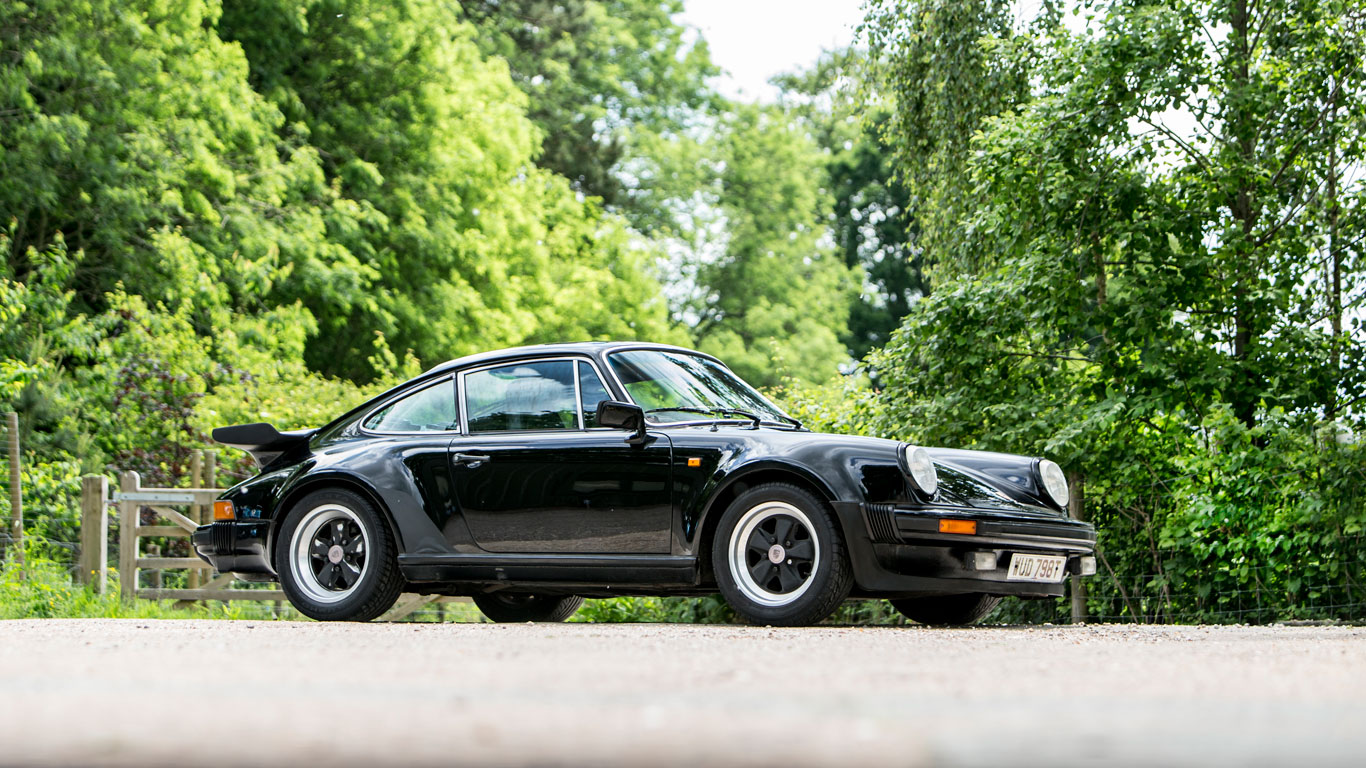 From one celebrity car fan to another: actor and comedian Peter Sellers owned a number of desirable cars in his time, including a Ferrari 500 Superfast, an Aston Martin DB4 GT and this Porsche 911 Turbo.

It was one of the last cars Sellers bought before he died and was actually on sale at a classic car dealer in 2016. At the time, Andrew Collins of Castle Classic Cars told Classic Car Weekly: “I think if we get strong interest from a Peter Sellers fan it could put a premium on the car. 911 Turbos of this era can fetch anywhere up to £70,000.” Bonhams reckons it could sell for between £60,000 and £80,000 at auction.

“The body is showing its age,” states the auction catalogue, but it is believed to have the same paintwork as when Peter Sellers took delivery. 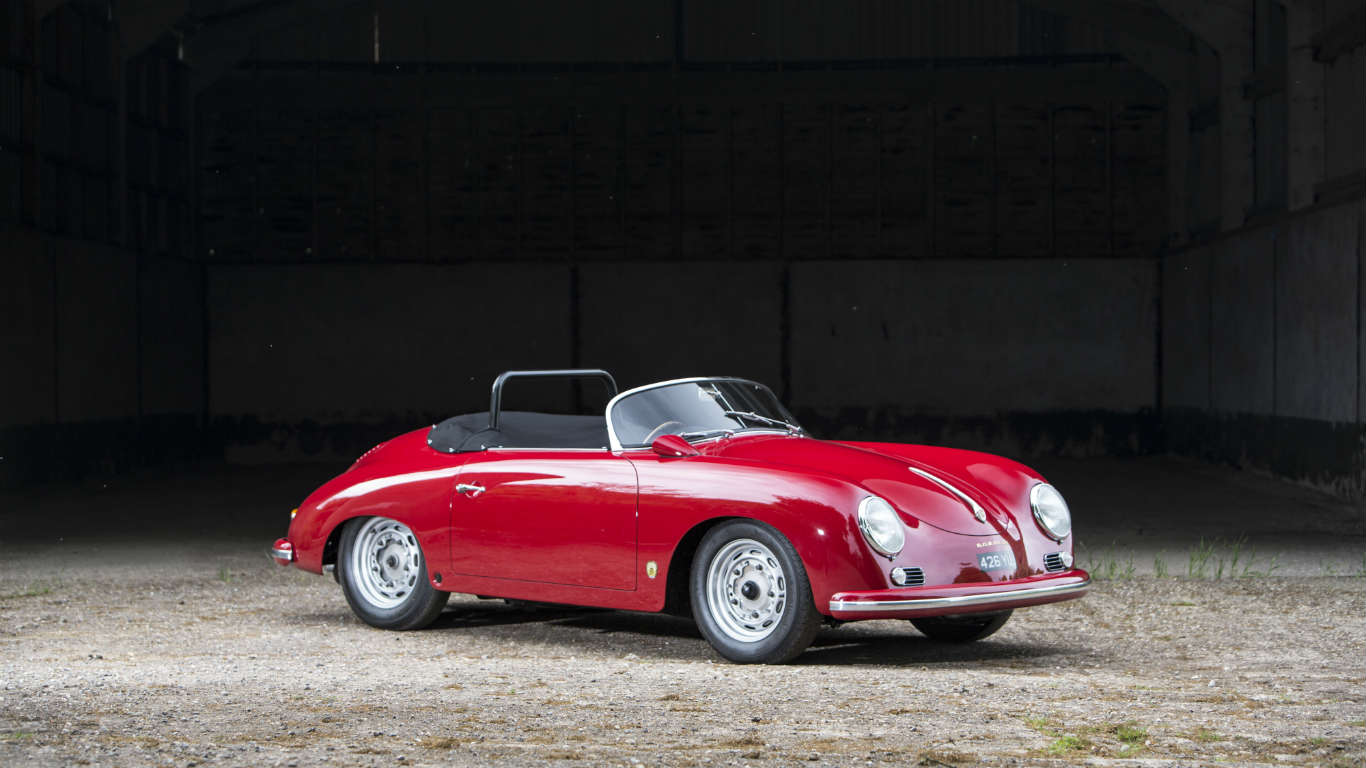 This 1957 Porsche 356A Carrera Speedster might not have a celebrity connection, but the pre-auction estimate puts it firmly within the ‘rich or famous’ category. It’s the last of only three right-hand drive Carrera Speedsters built by Porsche, all of which were delivered to Australia.

Between 2012 and 2014, the Porsche underwent a total restoration at a cost of £100,000. The single image doesn’t do this car justice and we recommend checking it out on the Bonhams website. Be prepared to collect your jaw from the floor. 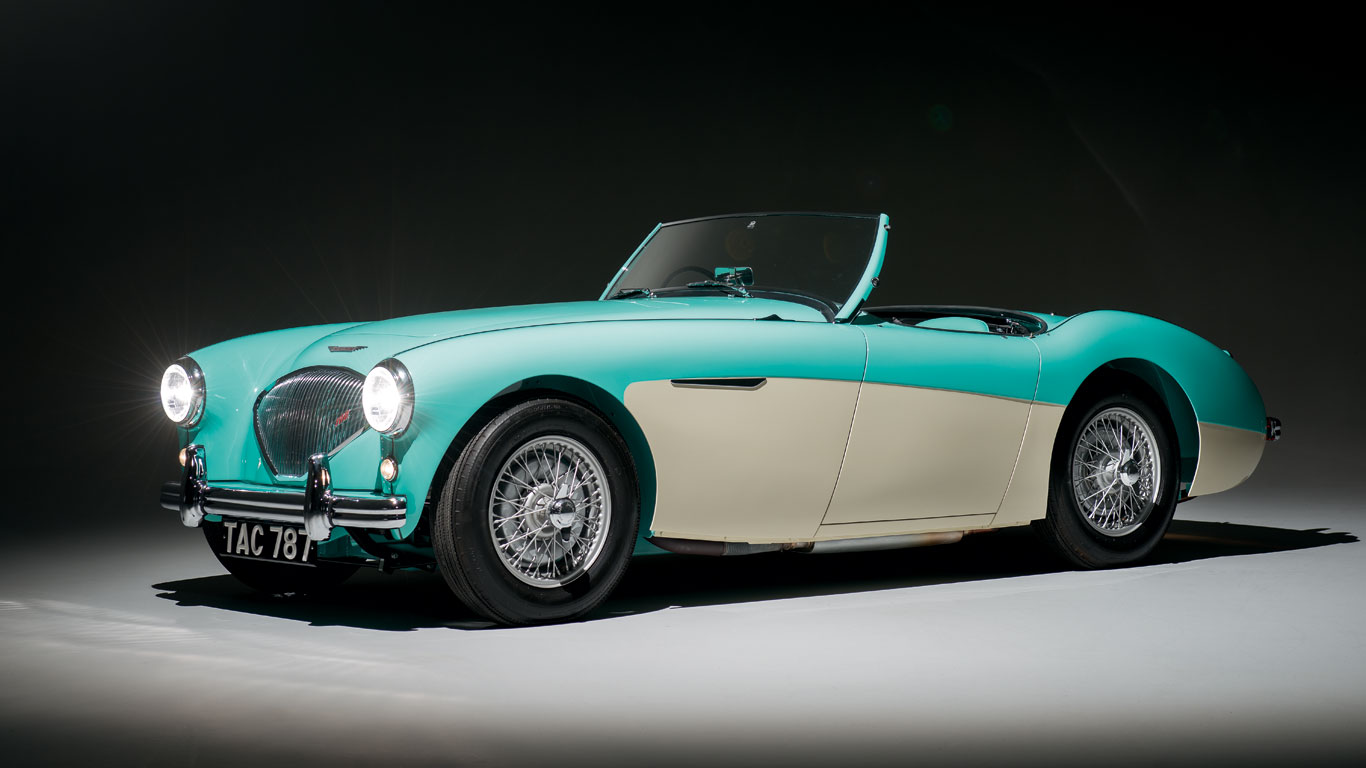 This Austin Healey 100 is one of four cars displayed by the factory at the 1955 Earls Court Motor Show and the first of its kind to be painted in Florida Green over white. The first private owner was a Lt. Colonel Hyde, who kept the car until 1963, by which time it had covered 45,000 miles.

The 100 is the quintessential British sports car, being both great to drive and delightful to look at. Restoration projects aren’t for the faint-hearted, so the fact that that TAC 787 was restored over a six-year period, before winning awards at the Austin-Healey Club National Concours, should fill you with confidence. 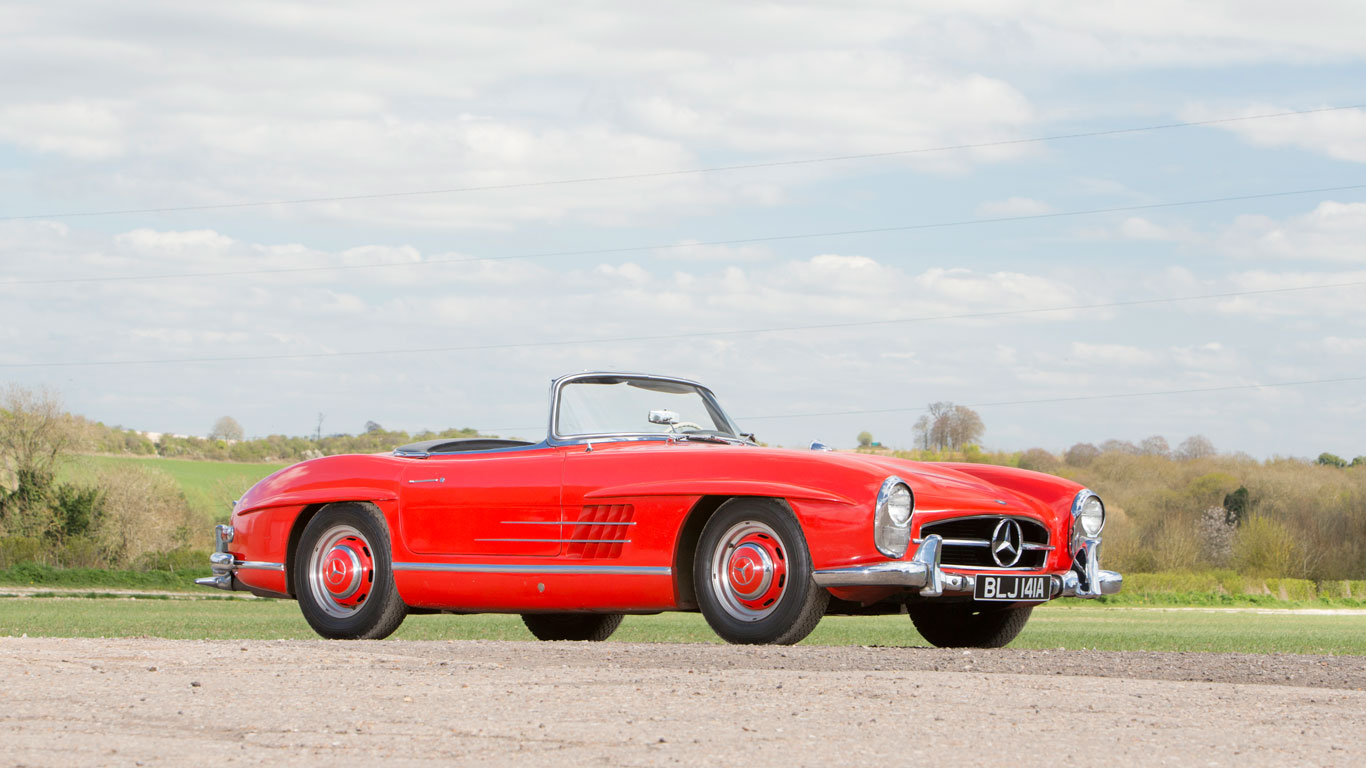 Although the 300 SL Roadster lacks the theatre associated with the ‘Gullwing’ doors, it remains one of the world’s most beautiful cars. That it’s more of a boulevard cruiser than the original doesn’t matter – you can thank the extra 100kg of weight for this – because we’d happily while away the hours on a boulevard in this 1962 example.

The car was shipped to the United States in 1963 but arrived in the UK in 1989. “There cannot be many better ways of travelling to a classic event, taking part and driving home,” says Bonhams. 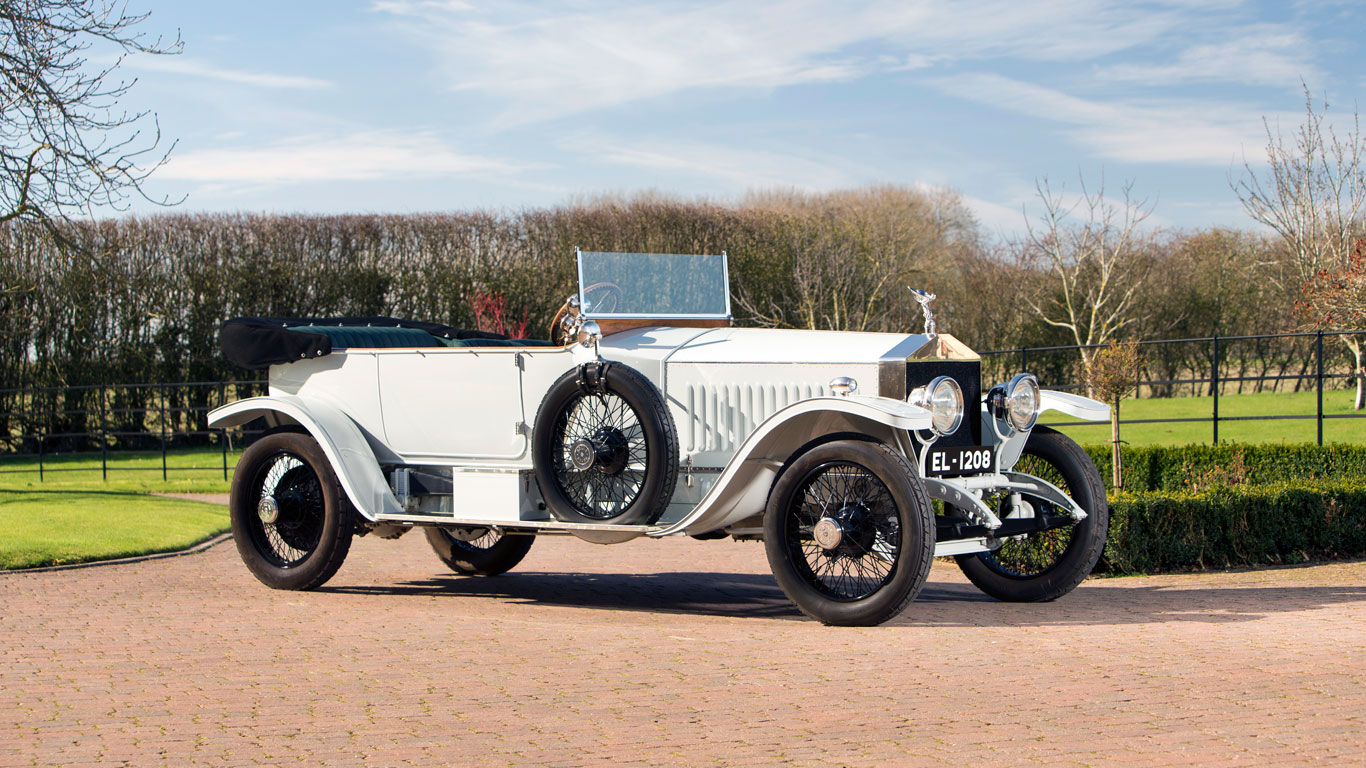 We can’t offer a celebrity connection with this 1914 Rolls-Royce 40/50hp Silver Ghost Open Tourer, but it was delivered new to His Highness the Maharana Sir Fateh Singh Bahadur of Udaipur. Quite literally, this makes it fit for a ‘King of Kings’.

The Silver Ghost is, without question, one of the finest cars Britain has ever produced. This example is up for sale because the owner has a split in the achilles tendon in his right leg, making it painfully difficult to drive. 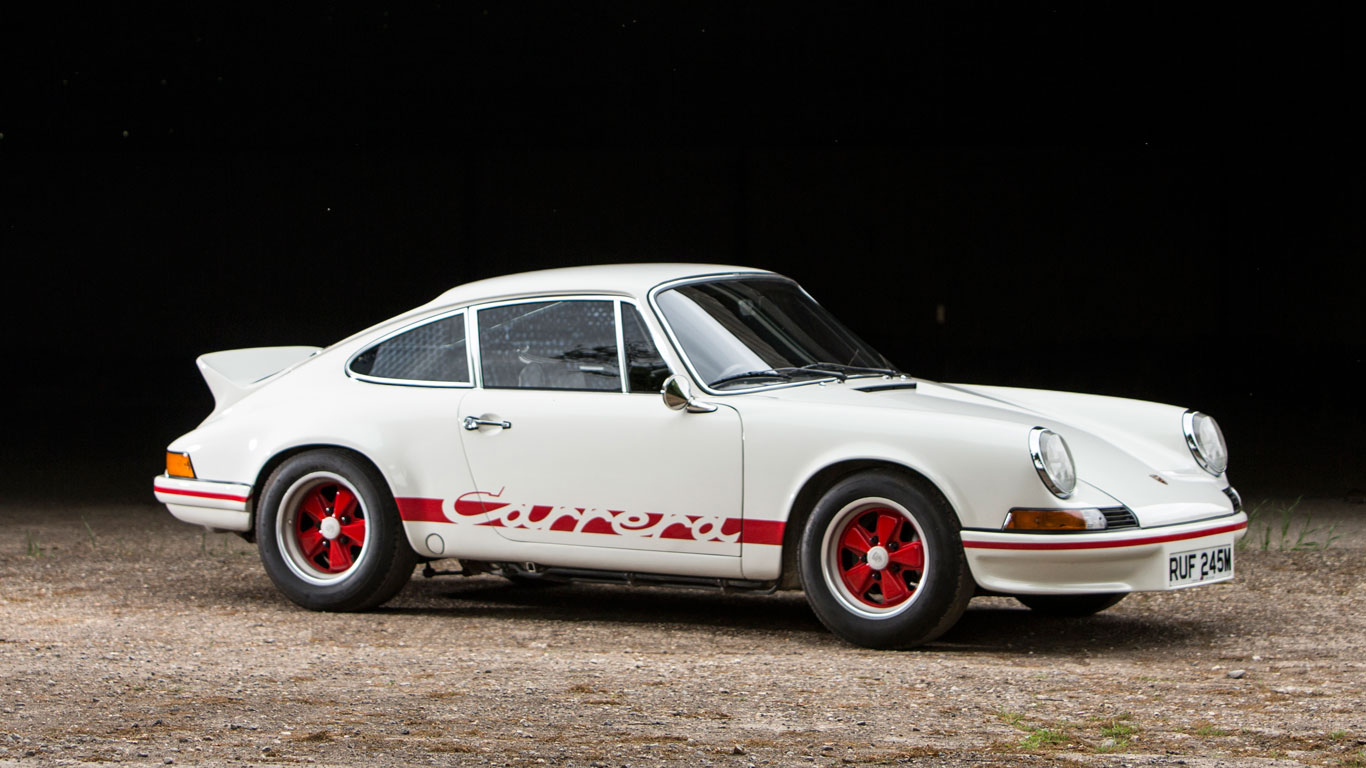 To some, the RS Lightweight is the holy grail of the Porsche 911 world, which is reflected in the pre-auction estimate. This 1973 example is one of 17 right-hand drive UK-supplied cars and was delivered new to Isaac Agnew, the official Porsche dealer in Belfast.

The original owner took part in several competitions before the car arrived in England in 1974. It took part in further rallies before an engine failure prompted the fitment of a replacement unit in 1975. Following a number of modifications, the car has been restored to its original specification, with the only exception being a pair of RS Safari seats. 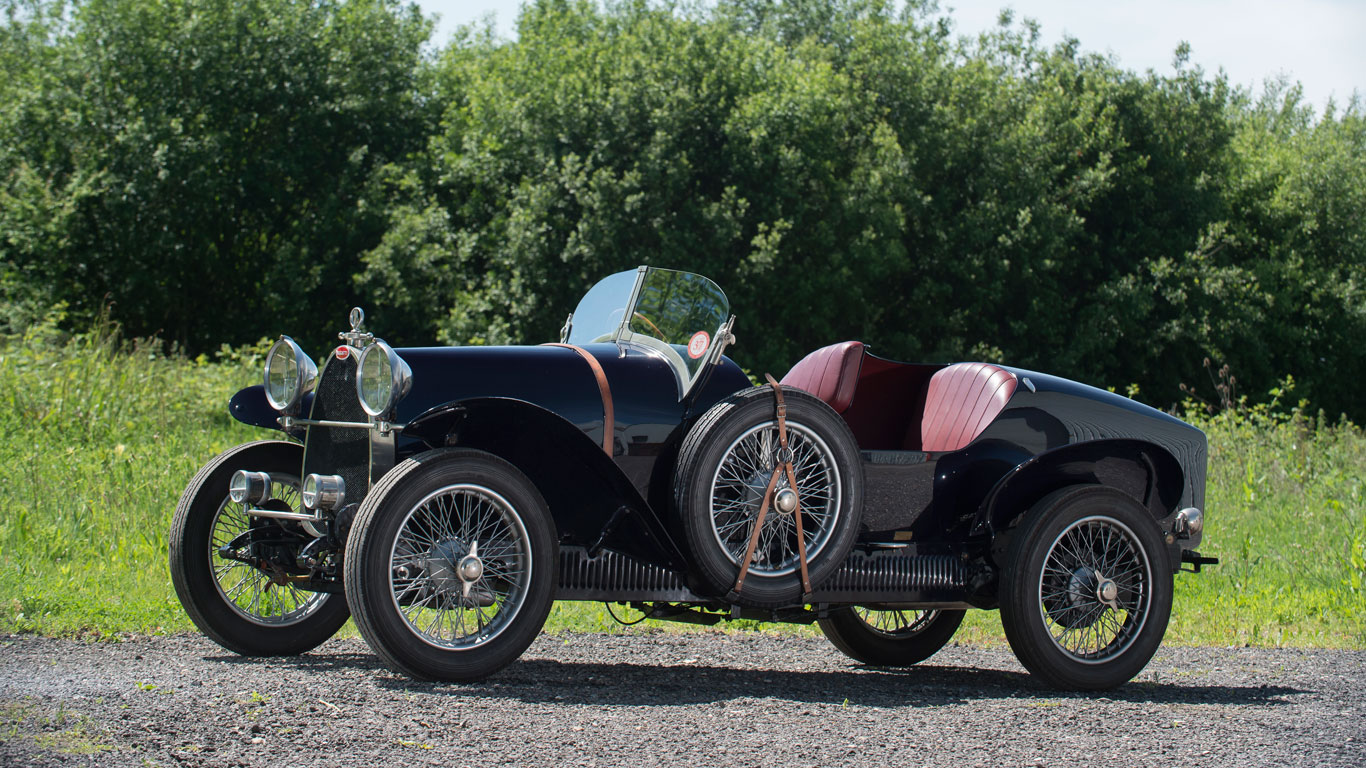 Having recently written a brief history of Bugatti, we felt obliged to include one of its cars in our Goodwood auction preview. The Type 23 Brescia was essentially a touring version of the Type 13 Brescia racecar and so-called in honour of the top four places at the 1921 Brescia Grand Prix.

This 1923 example features coachwork by Lavocat et Marsaud and received the Pebble Beach Chairman’s Award in 2011. 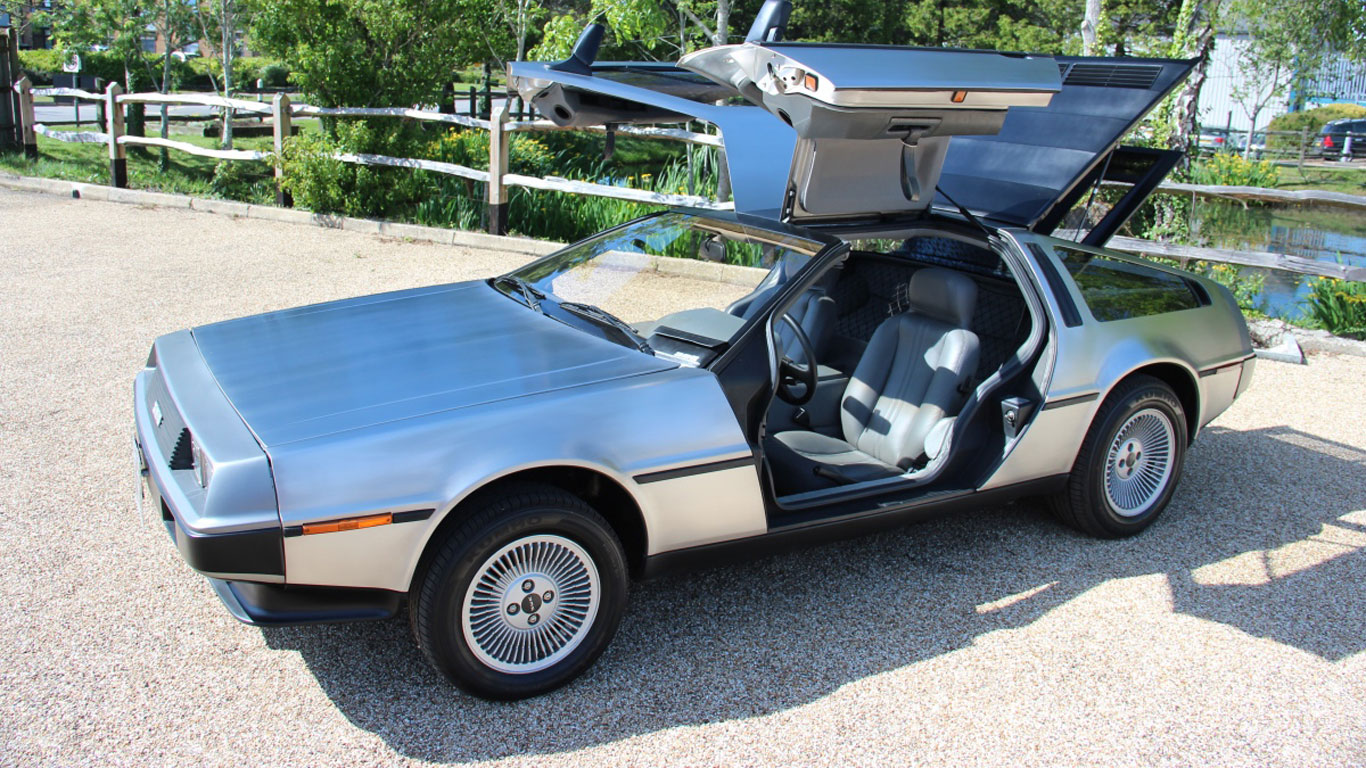 Thanks to a certain movie, the DeLorean DMC-12 will always be in demand and this is likely to be up there with the best of them. It was delivered new in California and has a mere 8,834 miles on the clock.

As you’d expect from a low-mileage car from the Golden State, the DeLorean is in remarkably good condition. It actually arrived in the UK in 2016 and has since been re-commissioned following years in storage. 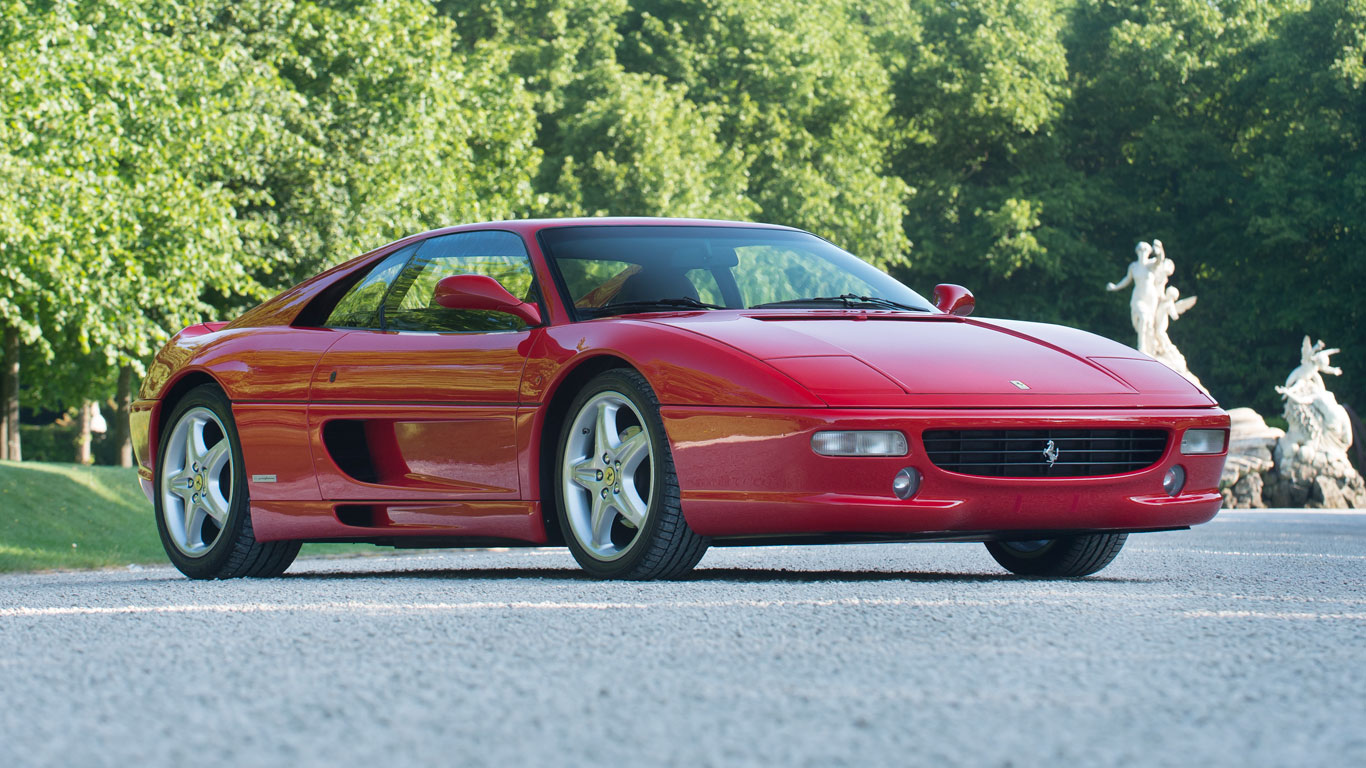 Arguably one of Ferrari’s most beautiful cars – certainly of the modern era – and yet this F355 Berlinetta is expected to sell for less than £100,000. A bargain? You decide.

Fittingly, this Italian thoroughbred was supplied new in Italy, before arriving in the UK in 2015. A certain Jeremy Clarkson enjoyed testing one so much, he arrived home and ordered one from his local Ferrari dealer. 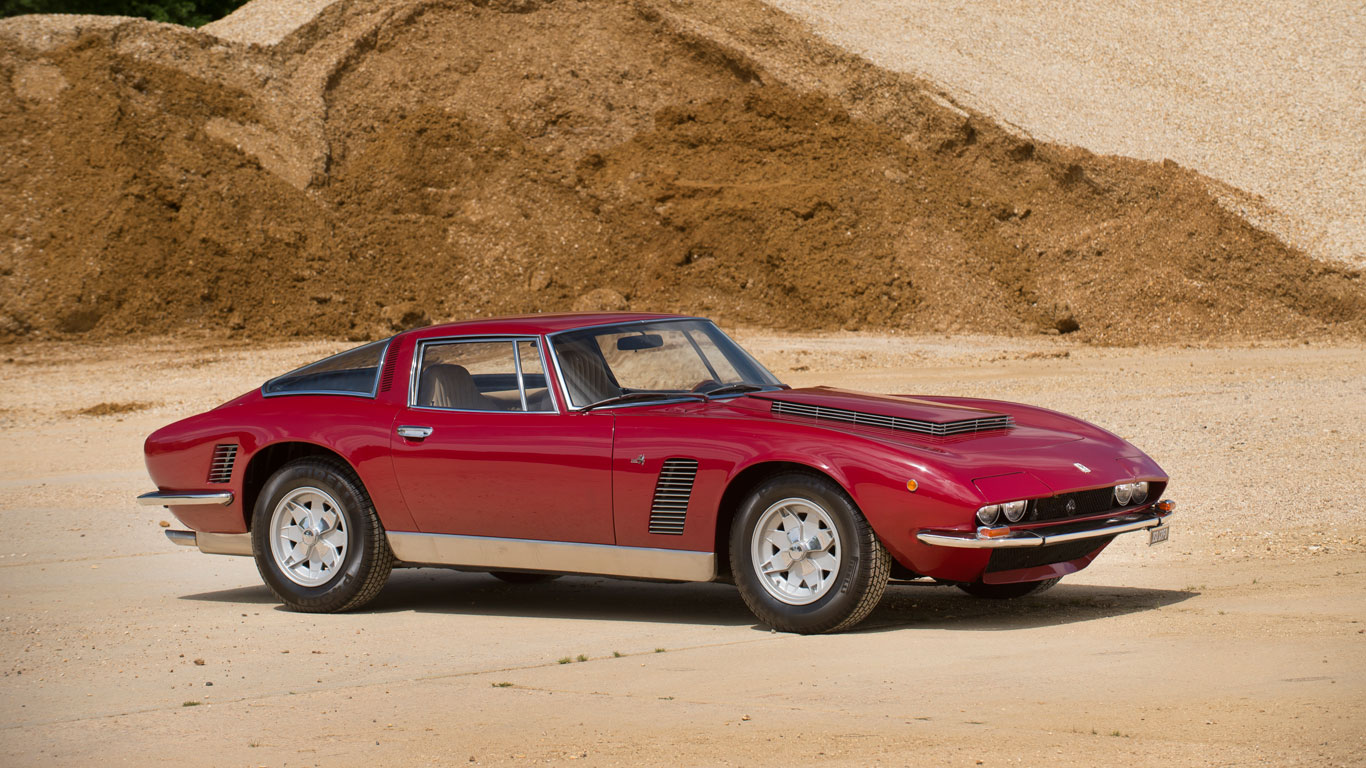 All too often, these auction preview galleries focus on the high profile and well-known cars. Breaking from tradition, we’ve selected a handful of alternatives, starting with this: a 1973 Iso Grifo. You can thank Giorgetto Giugiaro for the disarmingly attractive styling and American V8 power for the performance.

While we’d prefer the larger 7.0-litre Chevrolet engine, with 365hp on tap, this Ford-engined series II model is no slouch. The later cars are notable for their partially covered headlights. In total, only 413 Iso Grifos were made before the Italian firm was declared bankrupt. 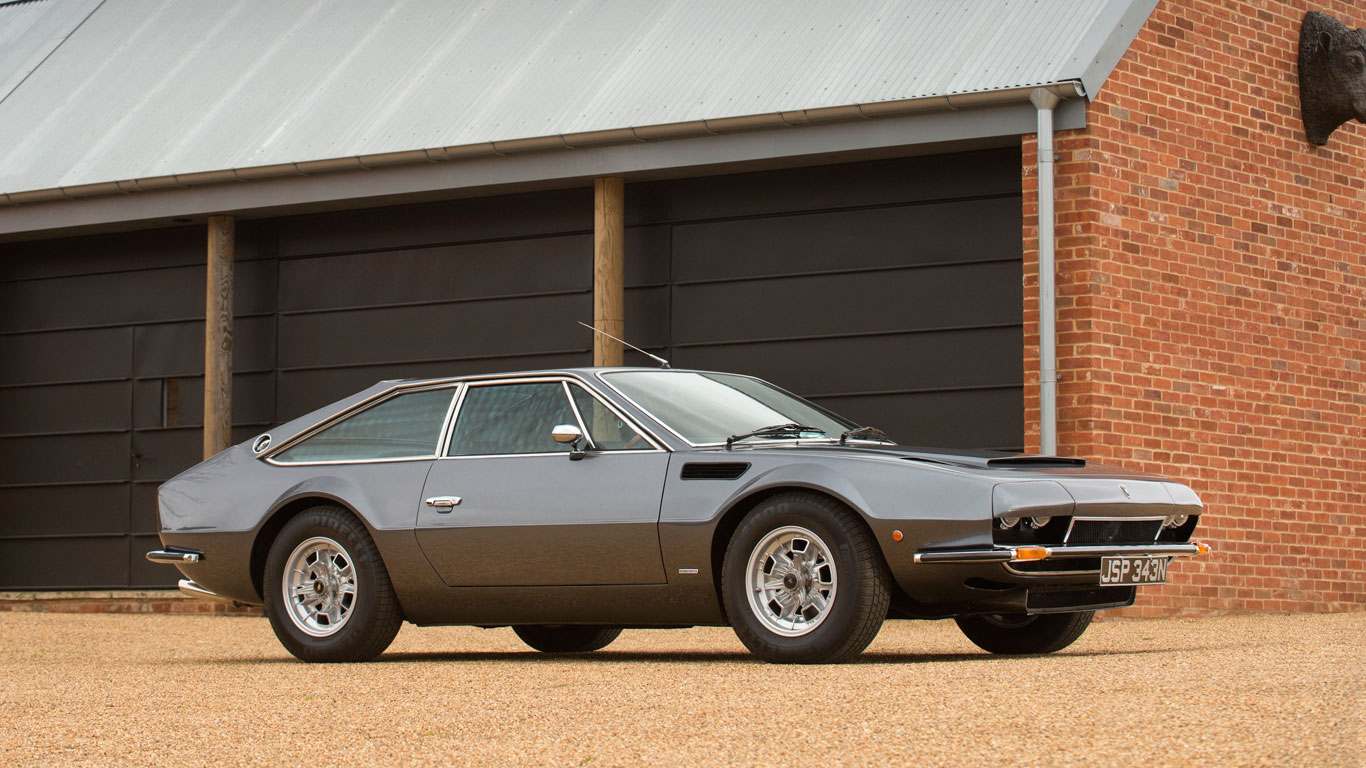 Another 1970s car with partially covered headlights, this is one of only 18 right-hand drive Lamborghini Jarama S models ever built. The styling divides opinion, but Ferruccio Lamborghini listed the Jarama as one of his favourite cars.

It’s the quintessential gentleman’s GT car, with effortless V12 performance and cross-continental comfort. That said, if you are crossing continents, you might want to consider the fuel bill. 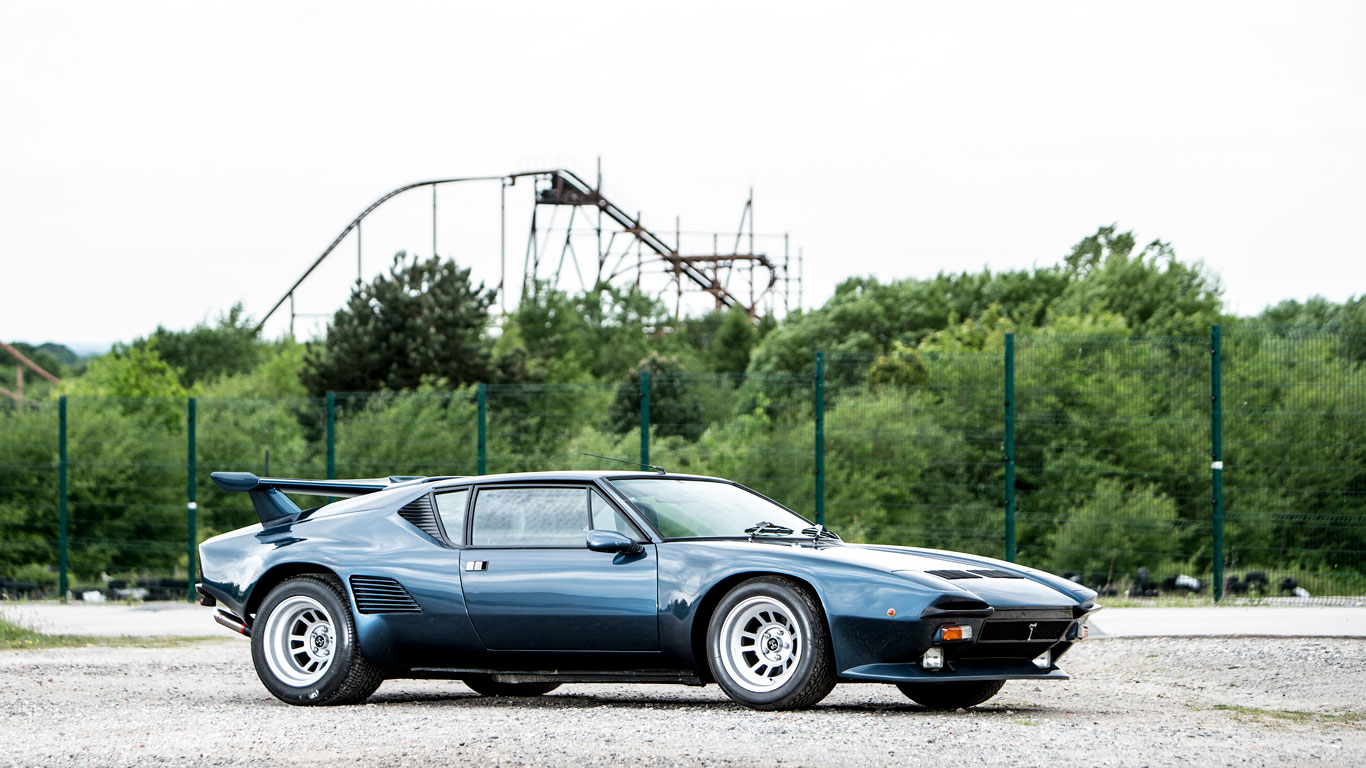 The original clean and elegant DeTomaso Pantera was very much a car of the 1970s, but the GT4, GT5 and GT5-S models were 100% products of the 1980s. The flared arches, in-your-face decals, fat wheels and wild rear wings were in keeping with the times.

This 1990 example is powered by a Ford Windsor V8 engine and has covered a mere 14,000km from new.  It comes complete with the original build sheet and production document, sourced directly from DeTomaso in Italy. 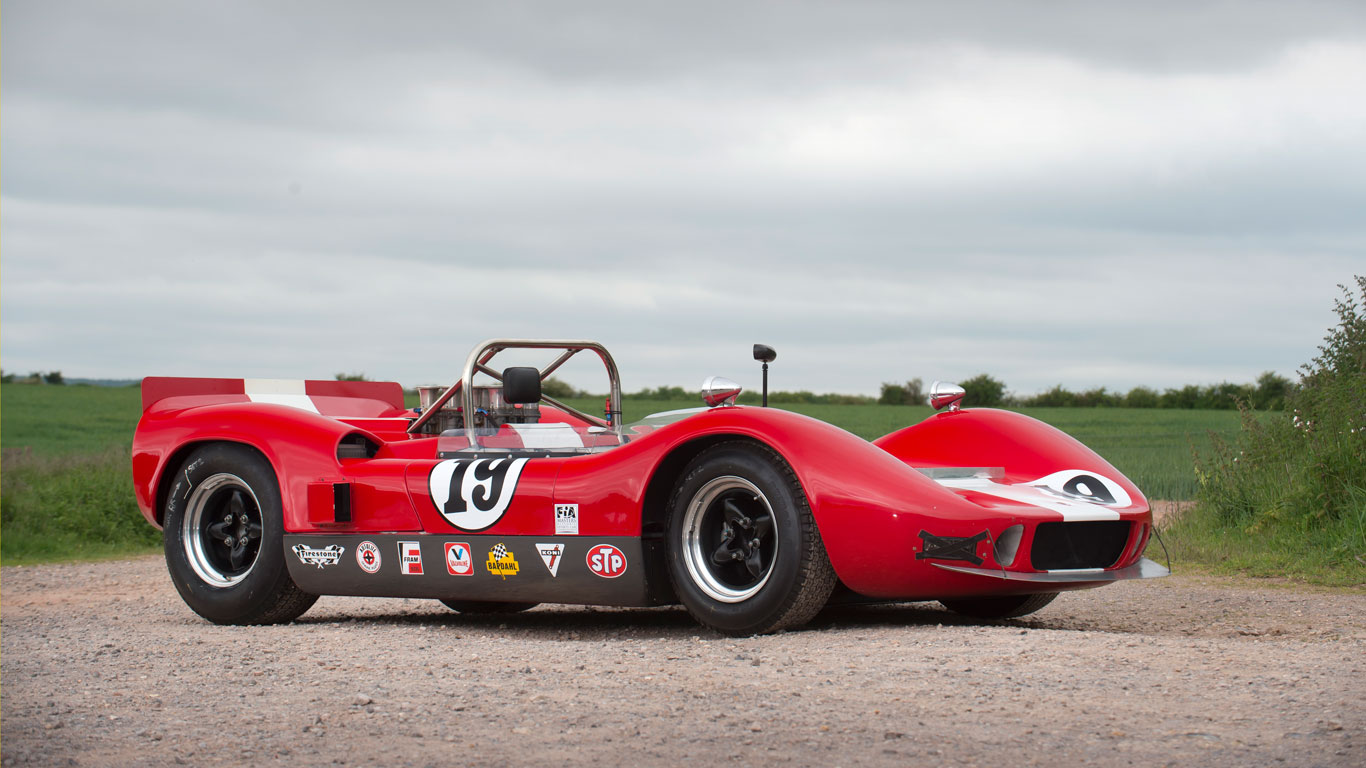 The MB1 was designed and handbuilt by Robin Herd and Bruce McLaren and was the official 1965 McLaren team car. Chassis number 30-04, as seen here, enjoyed a lengthy career in Can-Am races and is one of only 28 built.

It’s no stranger to Goodwood, having made several appearances at the Revival. 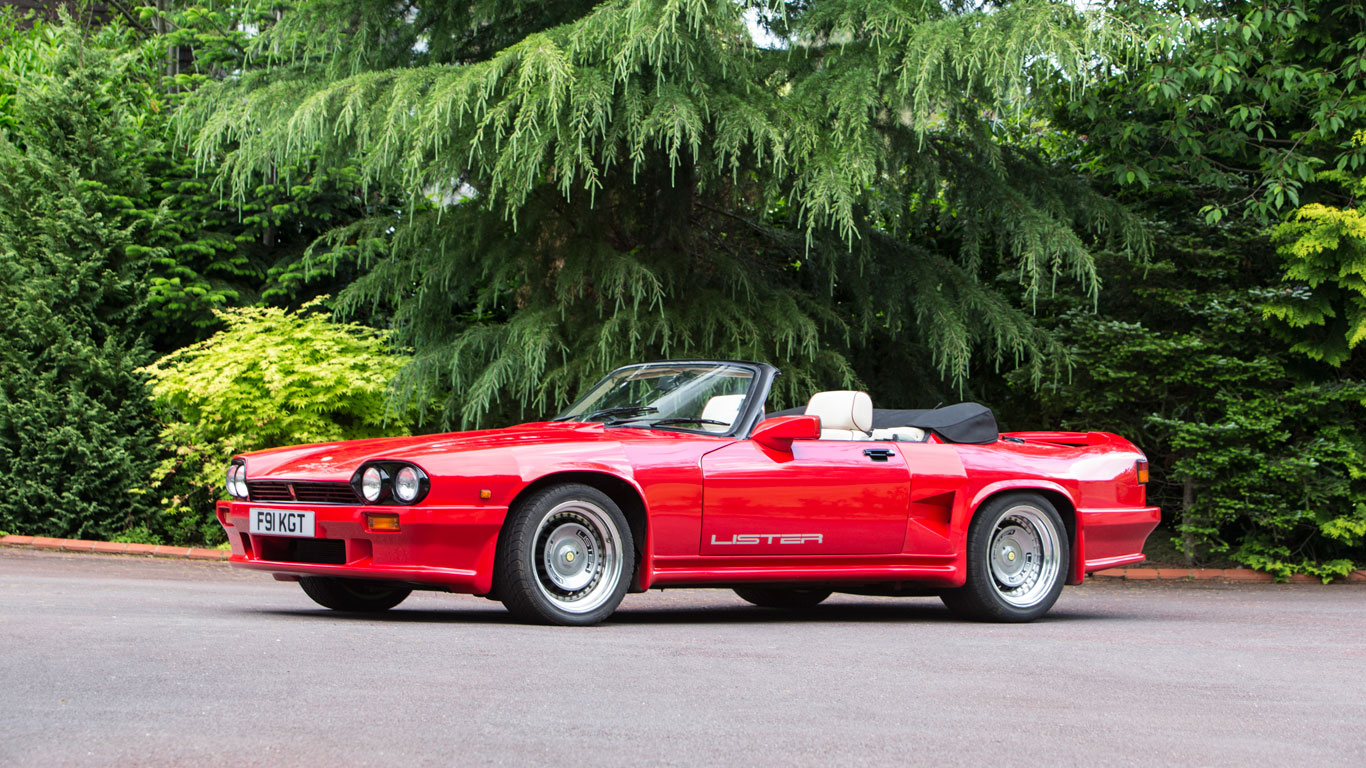 We conclude our Goodwood sale preview with this 1989 Lister-Jaguar XJ-S Le Mans, which is fitting, given the fact that the famous endurance race took place over the weekend. The Lister Le Mans was named in honour of Jaguar’s success at La Sarthe in the 1980s and was powered by a 7.0-litre version of Jag’s V12 engine.