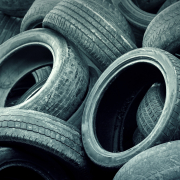 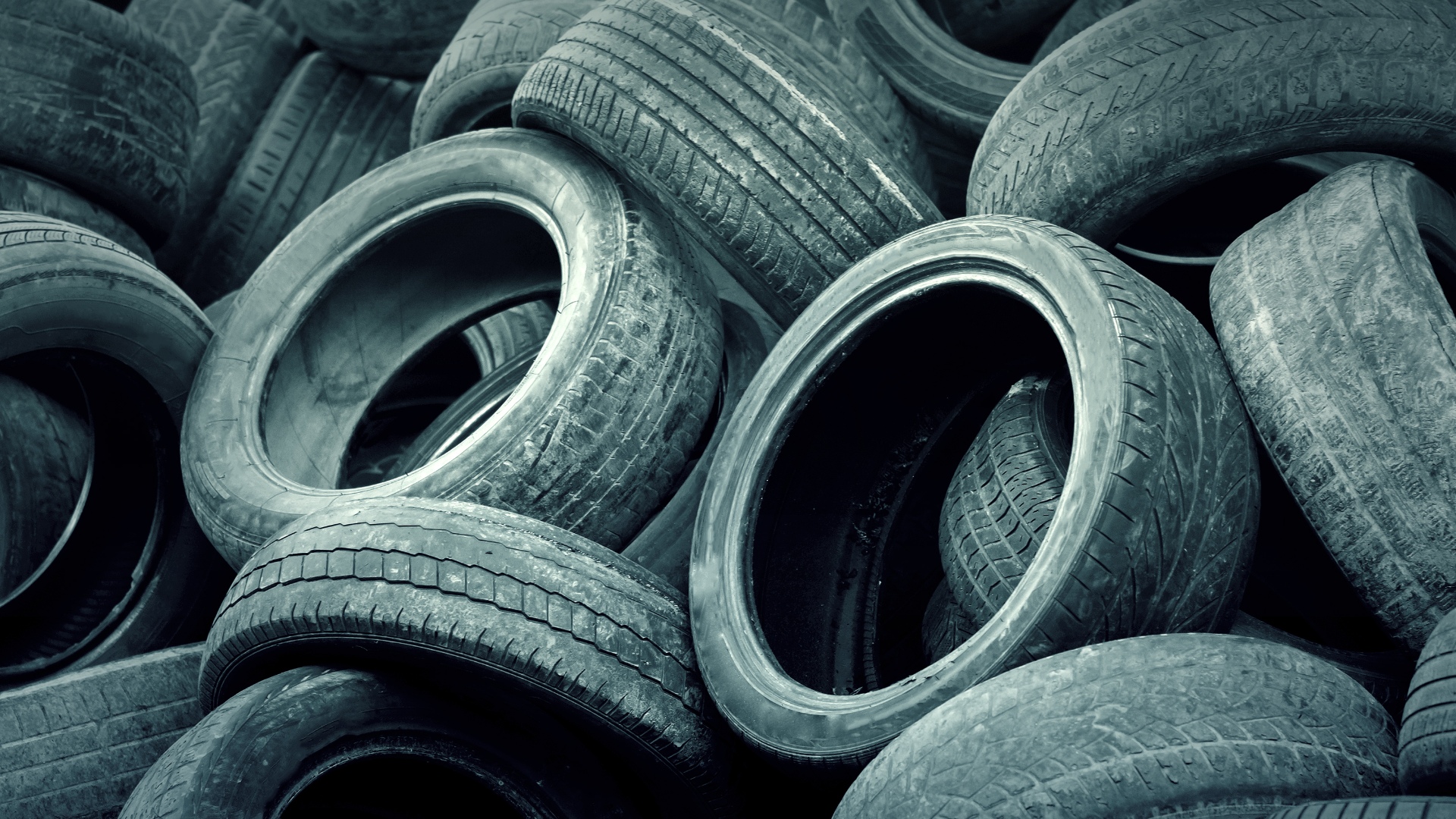 One in five British drivers have bought part-worn tyres, despite more than 98 percent being sold in an illegal state. That’s according to analysis by AA Cars suggesting our knowledge of tyres is a bit, well, rubbery.

Among that one in five, one in 10 said they would never buy part-worn tyres again. But 13 percent plan to in the future.

Even though a third (33 percent) of people see part-worn tyres as cost-effective, 62 percent were wrong when asked what the legal minimum tread depth was. This is 1.6mm, although many part-worn tyres are sold with around 2mm of tread remaining. Doesn’t sound like value for money to us…

The kicker, though, is that more than 20 percent of drivers reckon most used tyres sold in the UK are perfectly legal. The reality, by comparison, is frightening. 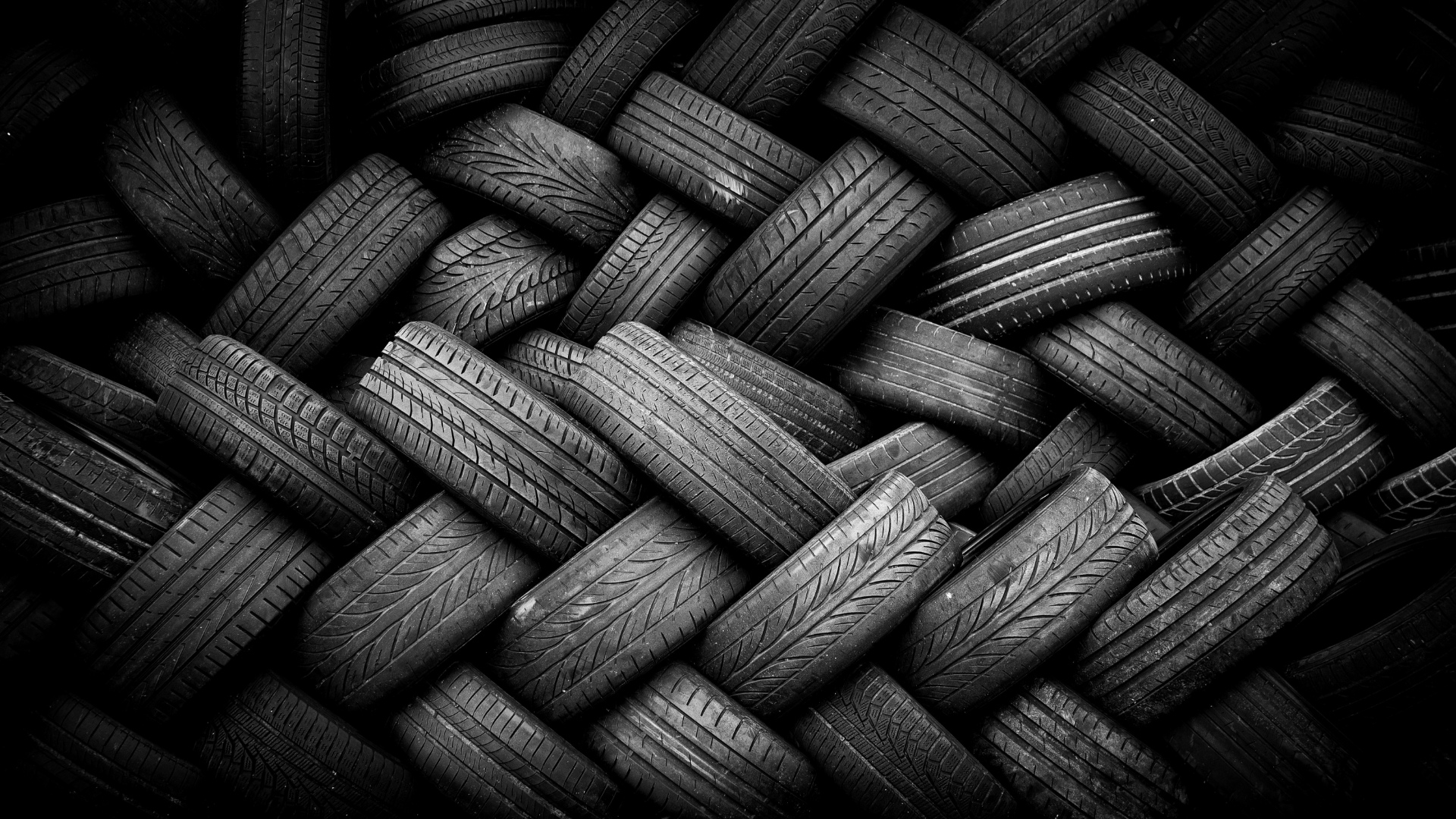 Besides the safety concerns, there is also potential cost involved. Never mind having to replace your newly-bought used tyres sooner than you’d hoped, you could also face a fine if caught with illegal rubber. This can be up to £2,500, with three points on your licence thrown in for good measure.

“Secondhand tyres might boast cheaper price points than new ones, but the tread left on these tyres is typically materially less, meaning you’ll be looking for yet more replacements in no time at all,” said James Fairclough, CEO of AA Cars.

“It’s also worth considering that a large proportion of the secondhand stock in the UK actually fails to meet the minimum legal safety standards.” 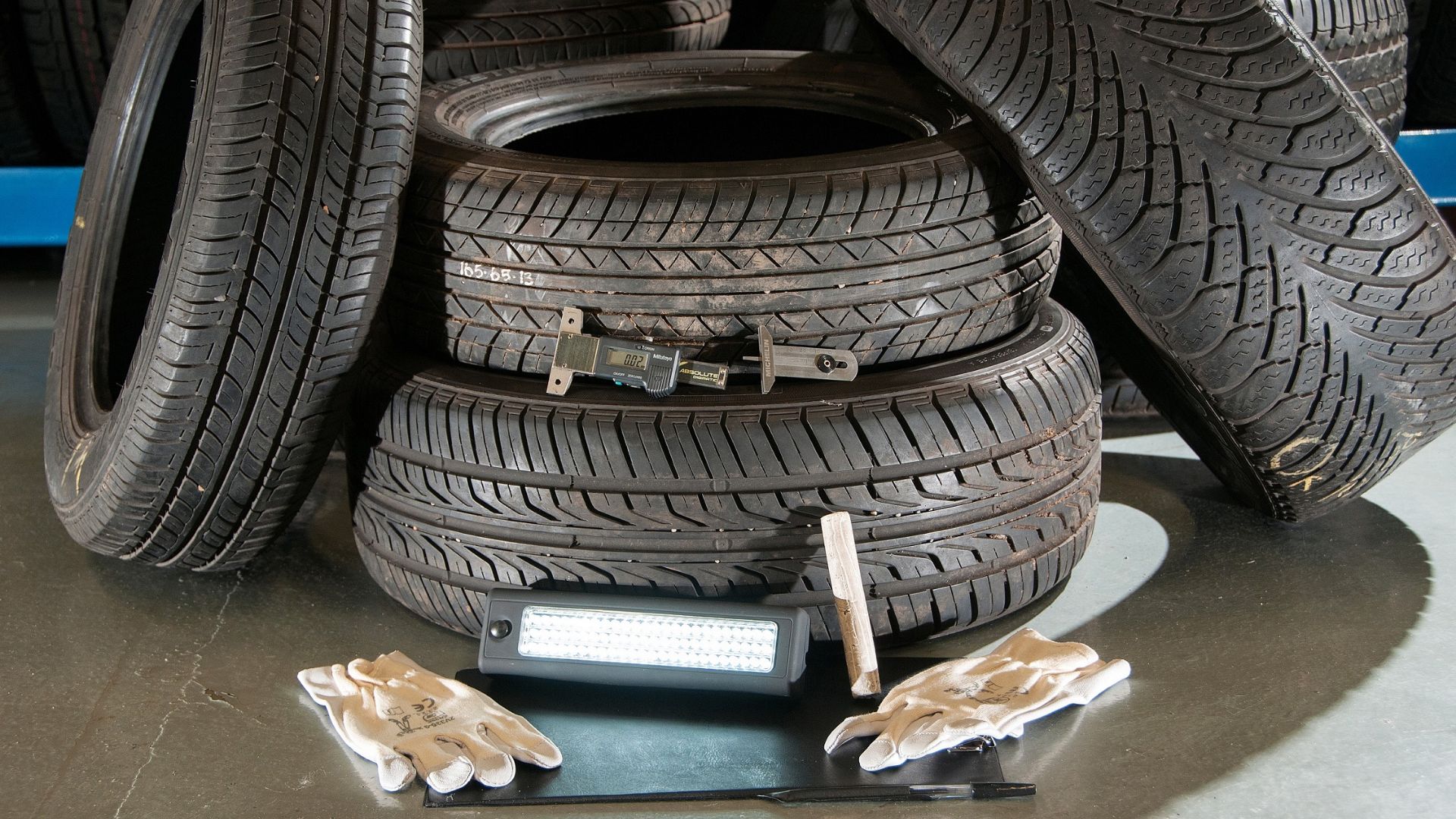 Update December 2018: As many as 99 percent of part-worn tyres found to be illegal

TyreSafe has conducted further investigations during October, tyre safety month. The shocking reveal is that 99 percent of part-worn tyre sellers were trying to sell illegal and dangerous rubber.

A total of 18 investigations were conducted, spanning 68 traders across the United Kingdom. Just one carried stock that could be considered usable legally and safely.

During tyre safety month a variety of regulatory bodies and authorities took part in investigating 29 businesses in the North East. None were compliant in their offerings.

“How can it be acceptable that three-quarters of the part worn tyres offered for sale were unsafe,” said Stuart Jackson, Chairman of TyreSafe.

“Tyres are the only part of car in contact with the road and essential to road safety – selling dangerous examples to unsuspecting motorists is putting lives at risk.” 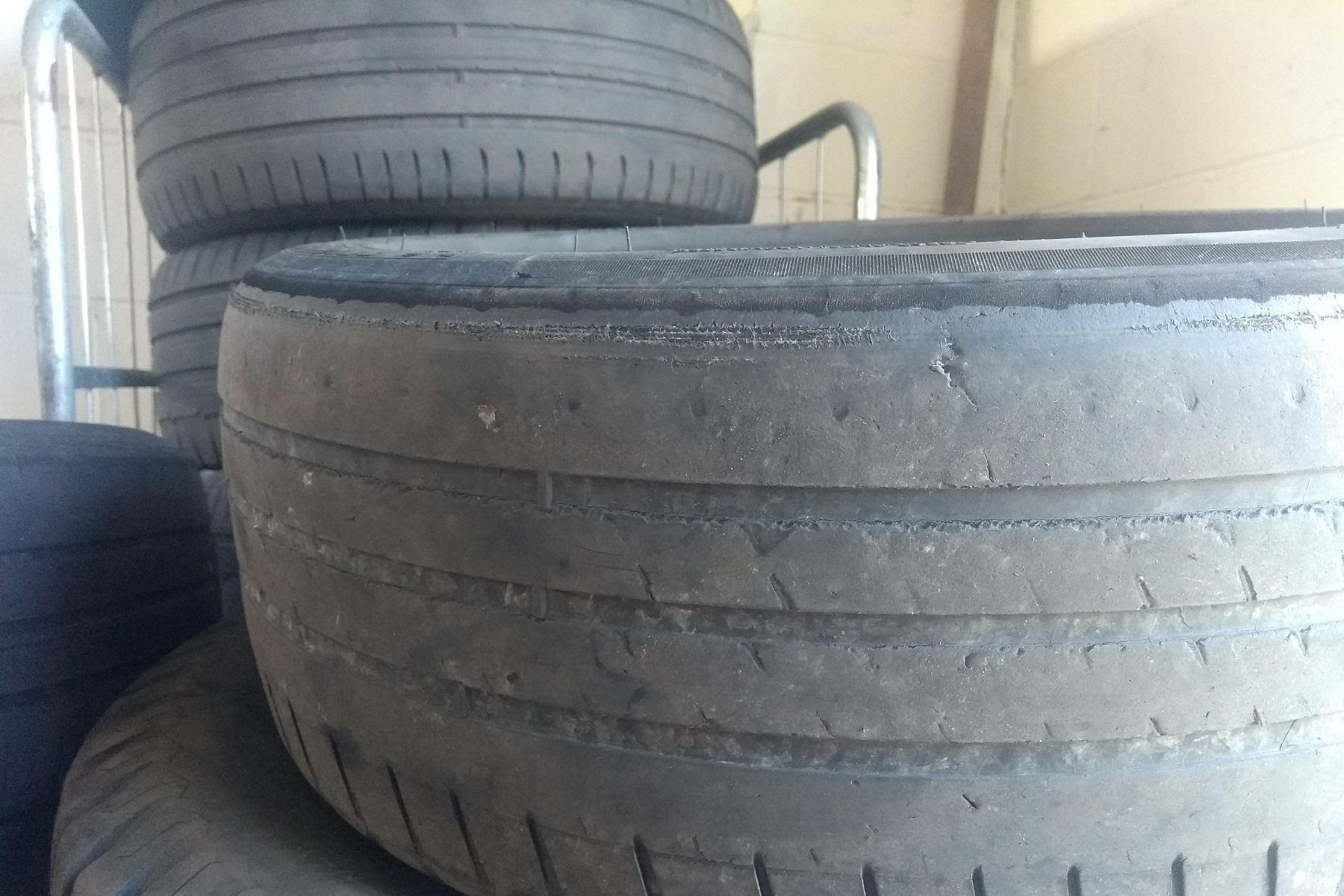 Do it across the tyre, too. Uneven wear is neither uncommon or desirable, whether it’s happening on your car, or it’s happened on a tyre you’re buying.

We wouldn’t buy anything with less than 4mm tread all round – it’s barely worth the cost of mounting them.

Age and health of tyres

Tread isn’t the only indicator of a tyre’s health. Look closely at the sidewalls for cracking, tears or frayed rubber.

These could be signs the tyre has undergone a bit more stress than you’d like, is getting on age wise or has sustained sun damage.

Over time the sun can dry tyres out, compromising the compound. Browning or yellowing of rubber can also indicate this.

A matching set of tyres

Whether you’re buying a full set or just replacing one of your own, it’s good to have matching rubber. Being non-matching should be considered an immediate strike against a set of four for sale second-hand. 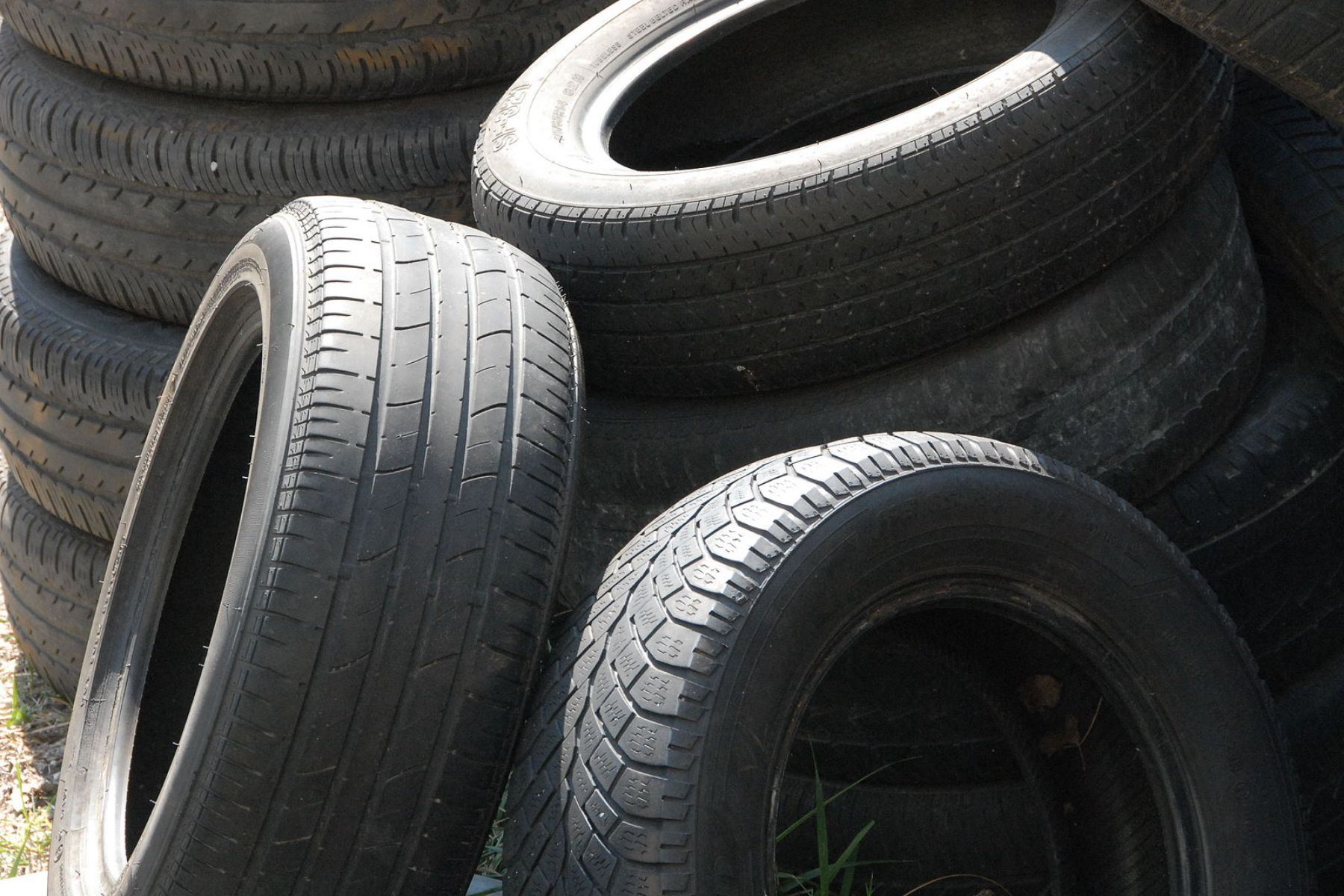 A survey by TyreSafe and Trading Standards discovered more than 90 percent of vendors selling part-worns to be breaking the law.

A total of 139 out of the 152 businesses visited offered dangerous and illegal rubber for sale. Issues ranged from insufficient tread-depth to uneven wear, flat spots and sidewall perishing.

During ‘mystery shop’ test purchases, some vendors fitted rubber with water inside, while others provided the wrong size altogether. Supply of tyres with irreparable damage, including still-embedded nails, was rife.

A recent case in Hemel Hempstead resulted in £7,000 worth of fines for the vendor and a prosecution by Hertfordshire Trading Standards, with a custodial sentence considered.

“While the shocking findings of joint investigations may reveal some part worn dealers are compliant, even if it is fewer than one-in-10, motorists have a 90 per cent chance of visiting an outlet selling illegal tyres,” said Stuart Jackson, Chairman of TyreSafe.

“As far as TyreSafe is aware, there is no other retail sector with such an atrocious track record.”

“TyreSafe applauds the magistrates’ comments and penalties in this latest conviction but it must be acknowledged that the retail of dangerous and defective tyres by part worn dealers is unacceptably commonplace nationwide.” 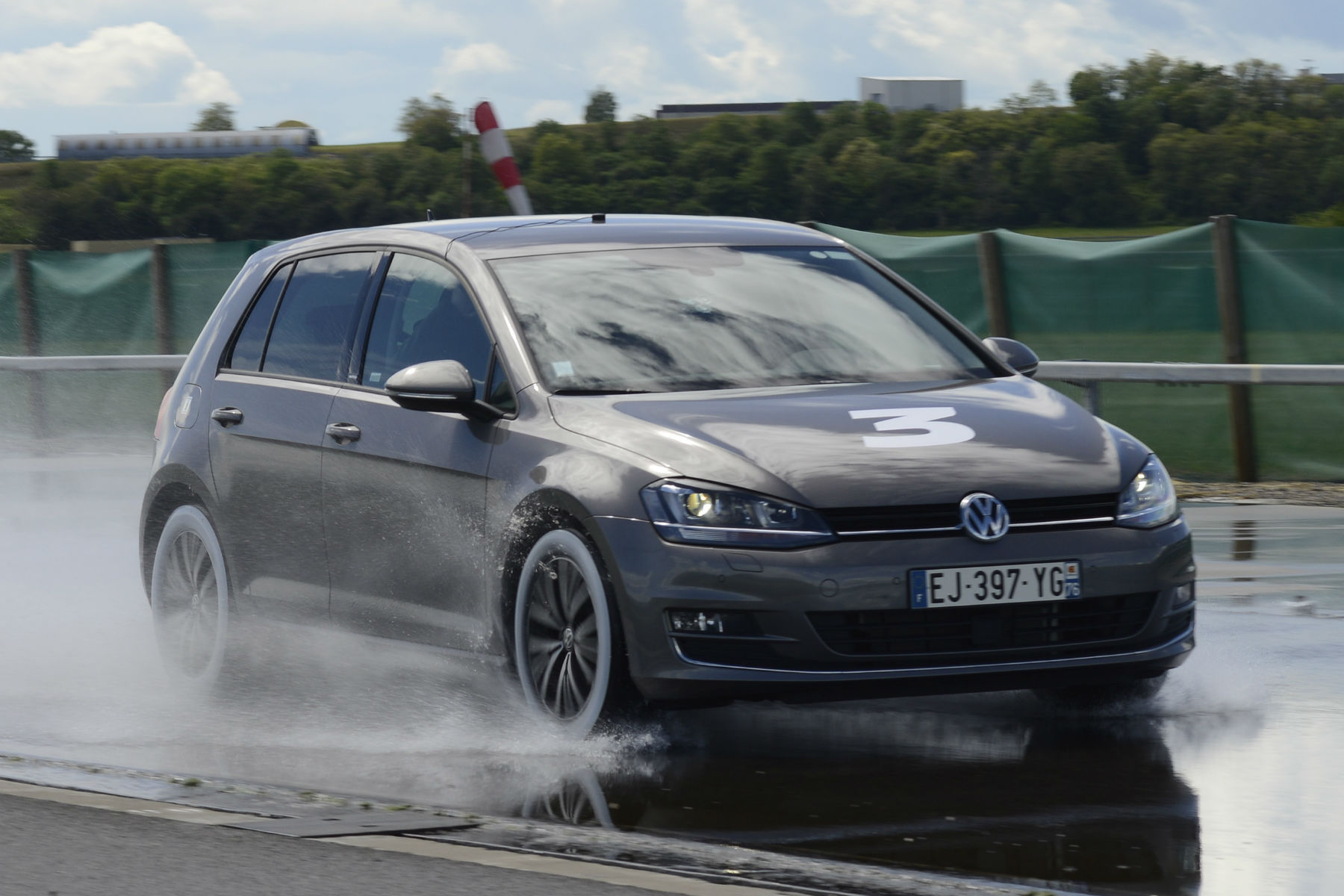 Tyre manufacturer Michelin has taken the unusual step of warning motorists that changing tyres before they wear to the legal tread minimum is costly, unnecessary and bad for the environment.

The minimum legal tread level is 1.6mm, but experts regularly advise changing tyres when tread wears down to around 3.0mm. As well as keeping drivers on the right side of the law, many assume tyres don’t perform as well when tread gets low.

But Michelin insists that modern tyre technology makes it possible for tyres to provide high levels of performance and grip from new, and through all of the tyre’s life down to the legal tread wear limit.

Indeed, the tyre maker says changing tyres too early could result in 128 million additional tyres being used a year in Europe. This amounts to nine million tons of additional CO2 emissions every year.

It also explains that tyres become more fuel efficient as they wear, meaning drivers could be disposing of their old rubber when it’s at the most economical.

Research commissioned by Michelin has revealed changing tyres at 3mm instead of 1.6mm would cost drivers in the EU an extra €6.9 billion a year in unnecessary tyre purchases and additional fuel consumption.

A spokesman said: “A consumer would not throw away his shoes just because they need cleaning, or the tube of toothpaste which was half full, so why would he do this with tyres if he can be convinced that it is safe to do so? Premature removal reduces the useful life of the product and would increase the frequency at which tyres are replaced.”

The firm adds that although tyres perform differently when worn, some premium tyres perform better in the wet at the legal minimum tread compared to brand new budget tyres.

The law about tyres

The legal minimum tyre tread is 1.6mm across three quarters of the centre of the tyre, and the tyre must be free of bulges, cuts and tears. If the police catch you driving with a tyre below this tread, you could be hit with an on-the-spot fine of £100 and three penalty points per tyre. If it goes to court, this could escalate to £2,500 per tyre.

Tyres with tread below this legal minimum will fail their MOT, while tyres approaching 1.6mm will result in an advisory.

You can check the tread of a tyre using a 20p coin. Place it in the main tyre grooves in the centre of the tyre. If the coin’s outer band is hidden, then tread is above the legal limit. Check your tyres at least once month or before any long journey and seek a professional’s opinion if you have any doubts. 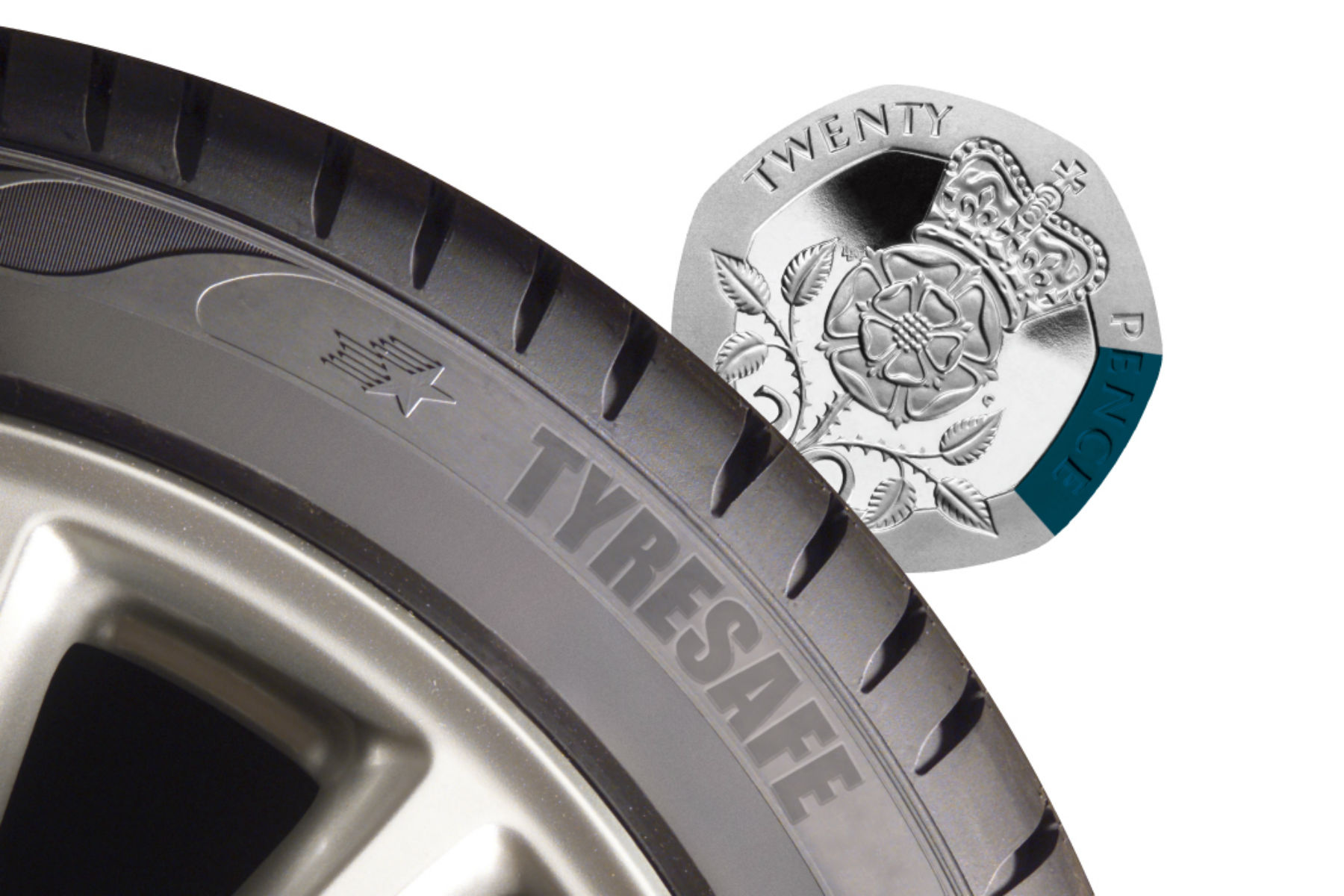 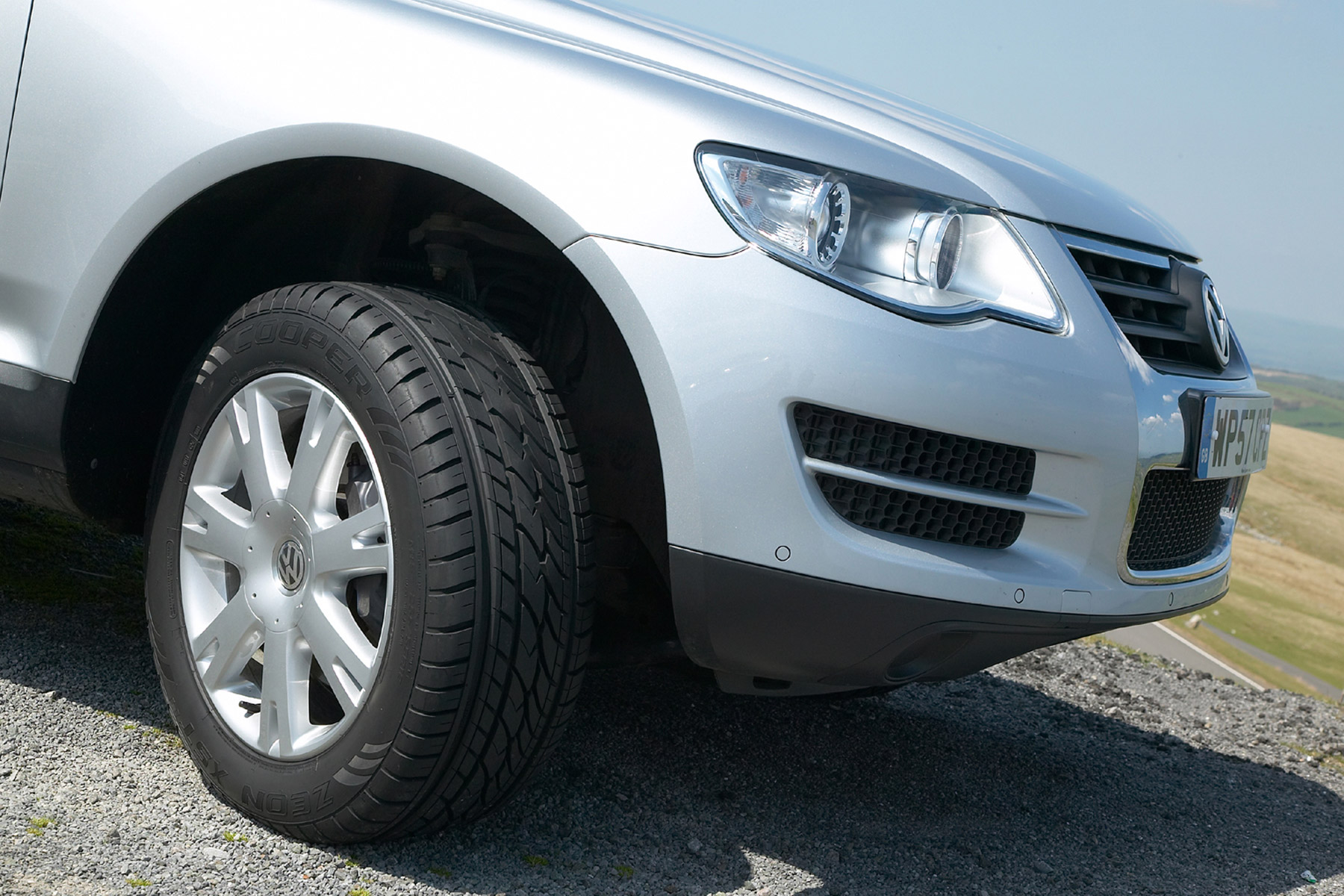 A freedom of information investigation has revealed that 2.5 million vehicles failed their MOTs for illegal tyres last year – while police hit almost 9,000 drivers with fines for defective rubber.

If you’re caught driving with less than 1.6mm of tread, you could face a penalty of up to £2,500 and three points on your licence – per tyre.

The Confused.com investigation found that 10,766 endorsements were handed out for defective tyres in 2016. Multiplying this by the maximum £2,500 penalty, motorists could be risking nearly £27 million in fines for not checking their tyres.

While driving with bald tyres can have a dangerous effect on a car’s handling and stopping distance, especially in the wet, the research also revealed that drivers often aren’t in a rush to get their tyres changed.

Out of those who were found to have illegal tyres, more than a third (34%) did not get their tyres replaced straight away because they didn’t have the time, while almost a quarter (24%) said they couldn’t afford new tyres.

A further quarter (23%) admitted to driving with dangerous tyres because the garage could not fit them in sooner.

Confused.com’s motoring editor, Amanda Stretton, said: “It’s pretty shocking to find out that 2.5 million drivers have failed their MOTs as a result of not checking their tyres regularly.

“We understand that arranging to have your tyres changed seems like a hassle, and we know some drivers are concerned about how big a hole it’s going to burn in their pockets. But motorists need to ask themselves if it’s really worth risking three points on their license and enormous fines of up to £2,500 per tyre.”

The website has launched a new tyre tool that lets drivers compare the cost of tyres.

“Confused.com’s tyre tool helps to lower the cost of buying new tyres by allowing you to compare prices in advance,” added Stretton, “so there are no nasty surprises once you get to the garage. Plus, you can pay on the day and the cost of fitting and disposal of your old tyres is completely included in the price.” 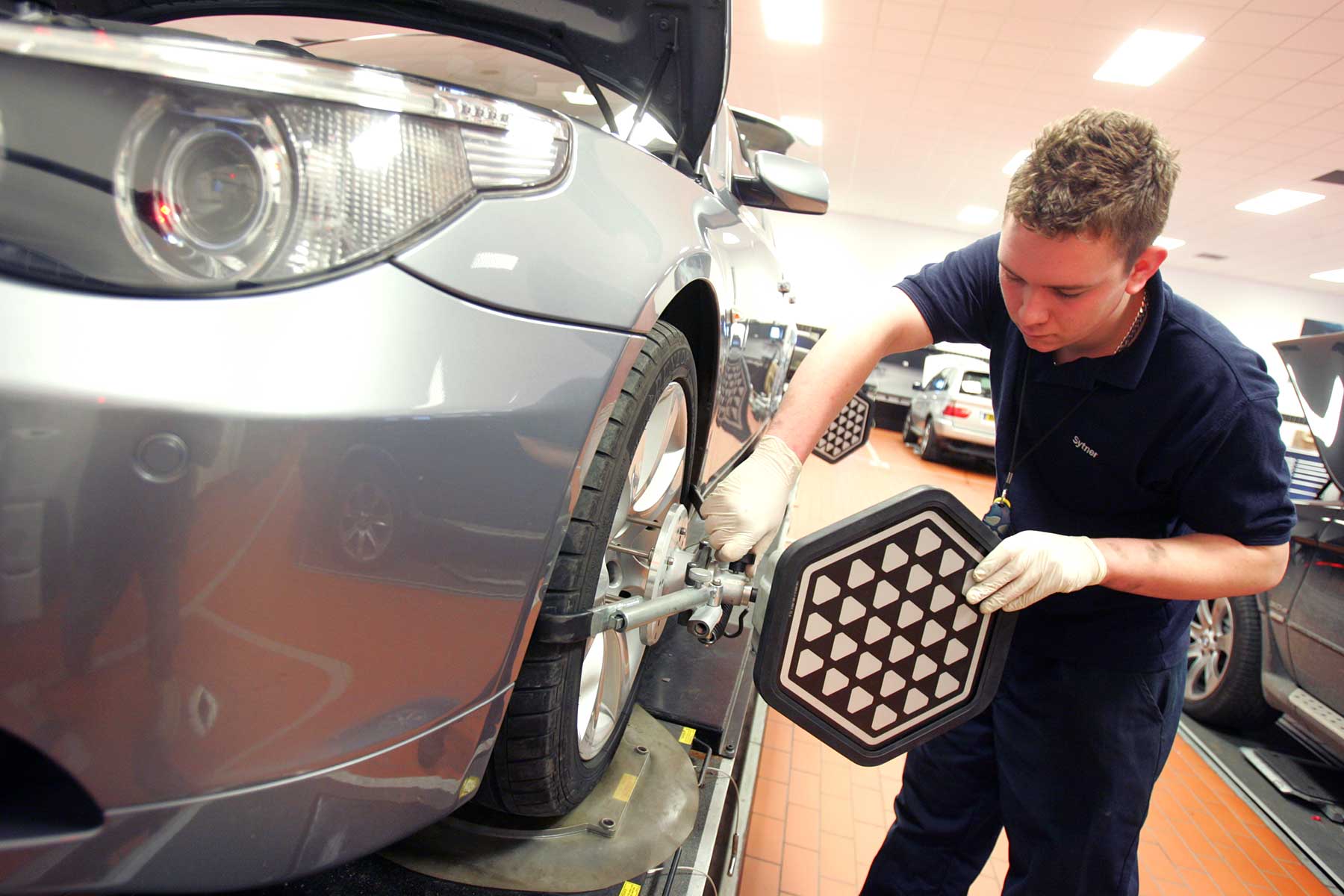 Less than half of motorists visiting a fast-fit centre are getting their new tyres fitted on the first visit, according to new research from e-commerce firm epyx.

60% of drivers had to make a second visit to get the right tyre – and it’s because there are more brands and sizes of tyre than ever before.

The figures show that fast-fit centres are now only half as fast as they were 10 years ago.

It’s not the fast-fit centres’ fault though, says the appropriately-named epyx head of business development David Goodyear: it’s simply a reflection of how huge the range of tyres fitted to today’s cars is.

“It would be nearly impossible for a fast-fit centre to carry all the stock needed to cover the majority of the current car parc, such is the diversity of size and manufacturer.”

Not only are there more sizes than ever before, but many premium brands also have bespoke tyres developed especially for them: on cars such as Porsche, BMW and Jaguar, tyres carry a brand-specific identifier on the sidewall denoting the rubber is only for that car.

Enter the franchised dealer, says Goodyear: not traditionally considered an outlet for new tyres, the fact they only have to carry tyres to fit their own range of cars can give them an advantage.

“If they choose to carry a reasonable selection of stock, then they should be able to comfortably beat the first-time-fit figures being achieved by fast fits.”

Do you have experience of a fast-fit fitter being anything but? Have the bespoke tyres of your own car caused you headaches? Do share your experiences with us. 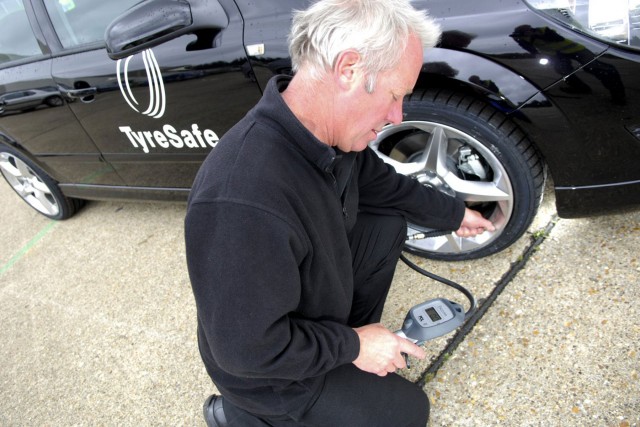 A faulty Tyre Pressure Monitoring System (TPMS) now results in automatic MOT failure – even if your tyres are in good condition and correctly inflated.

That’s the message from Tyresafe, the UK’s tyre safety association, which has produced a video to promote the benefits of TPMS.

Some TPMS systems work differently to others, but all remotely monitor air pressure in the tyres.

Millions of cars in the UK are already fitted with TPMS systems, which became mandatory on all new models last year. They work by monitoring air pressure in the tyres, warning the driver if they are under-inflated or punctured.

TPMS systems are designed to last many years, but may need occasional servicing. The most likely causes of faults are a flat internal battery and corrosion on the sensors.

Beyond a failed MOT, incorrect tyre pressures can have other consequences, including increased fuel consumption, reduced grip and unpredictable handling.

For that reason Tyresafe recommends that drivers don’t rely solely on TPMS, but manually check their tyre pressures at least once a month – and before any long journey. 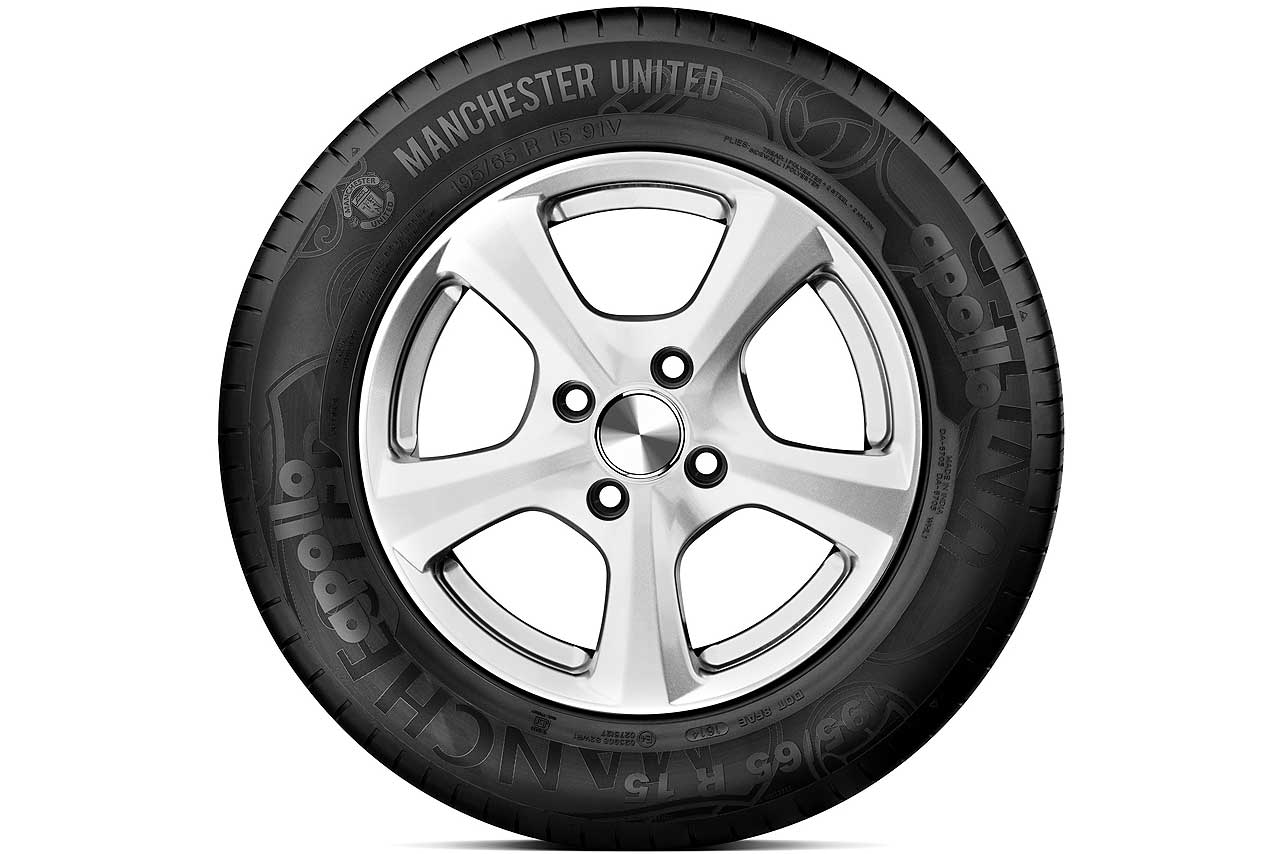