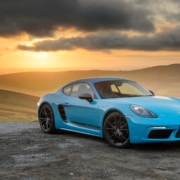 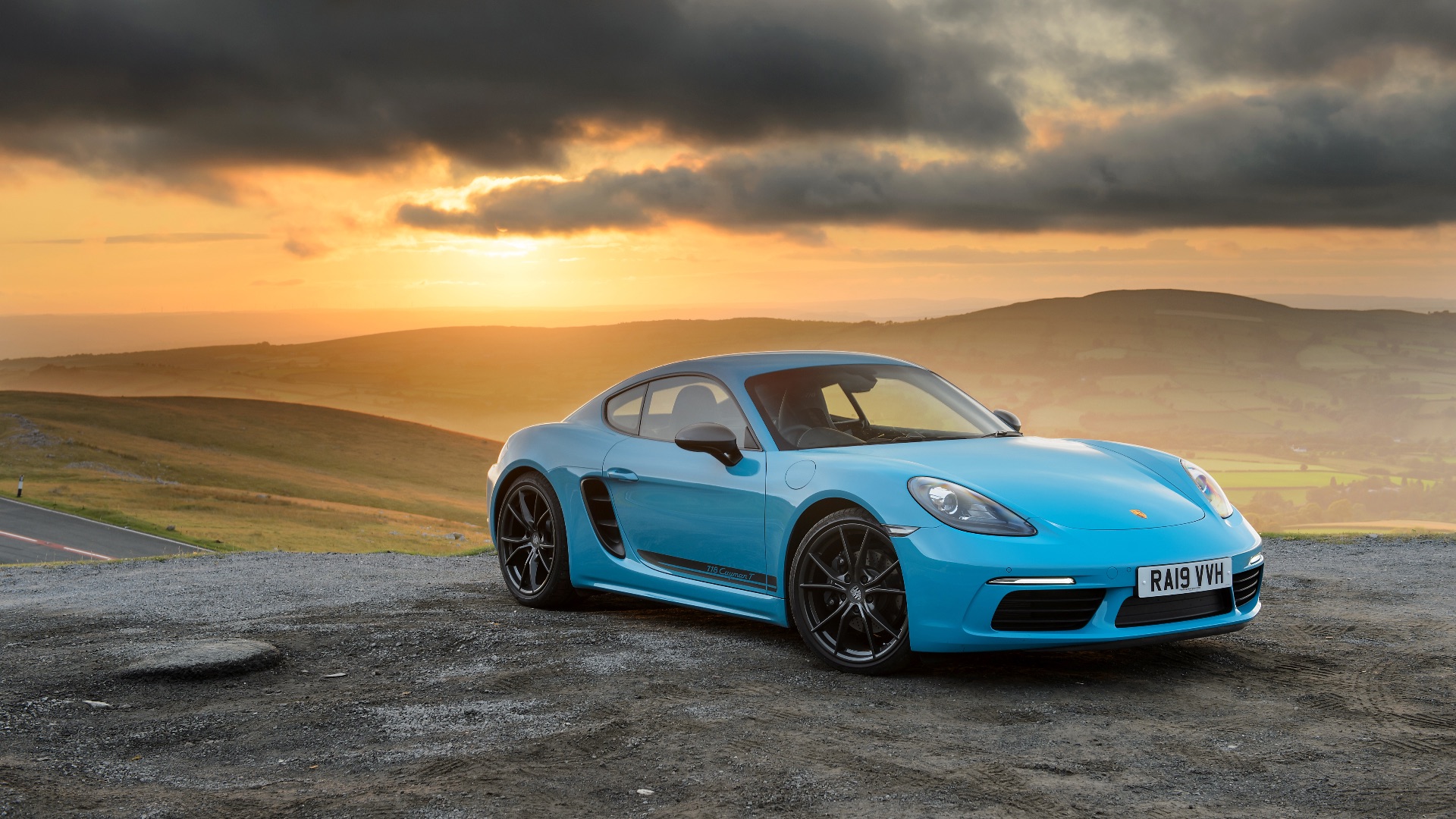 For Porsche fans, the letter ‘T’ has mixed meanings. In 1967, the 911T debuted as Stuttgart’s entry-level sports car, replacing the four-cylinder 912. Six years later, Porsche launched the 911 Carrera 2.7 RS. In T-for-Touring spec, it was the exact opposite: a more luxurious take on the flagship road racer. Then, in 2017, came a new 911T, this time a mid-range model focused on pared-back performance. Confused? You’re right to be.

The 718 Cayman T follows the lead of that recent 911: no extra power, but less weight and a sportier chassis. A budget GT4, if you will. Additional kit includes adjustable suspension, a mechanical limited-slip diff, torque vectoring, the Sport Chrono pack, sport mode for the stability control and a ‘loud’ button for the exhaust.

You also get 20-inch alloys, retro sill stripes that evoke the classic RS, plus the all-important fabric interior door straps. They probably save the weight of a crisp packet, but reek of motorsport cool.

Tick all those options on a basic 2.0-litre Cayman and Porsche says you’ll pay 10 percent more than the £7,265 premium for the T. Notionally it’s good value, then. On the downside, that elevates it to within £1,691 of the 2.5-litre Cayman S. So which one to buy? Let’s settle this with a race… 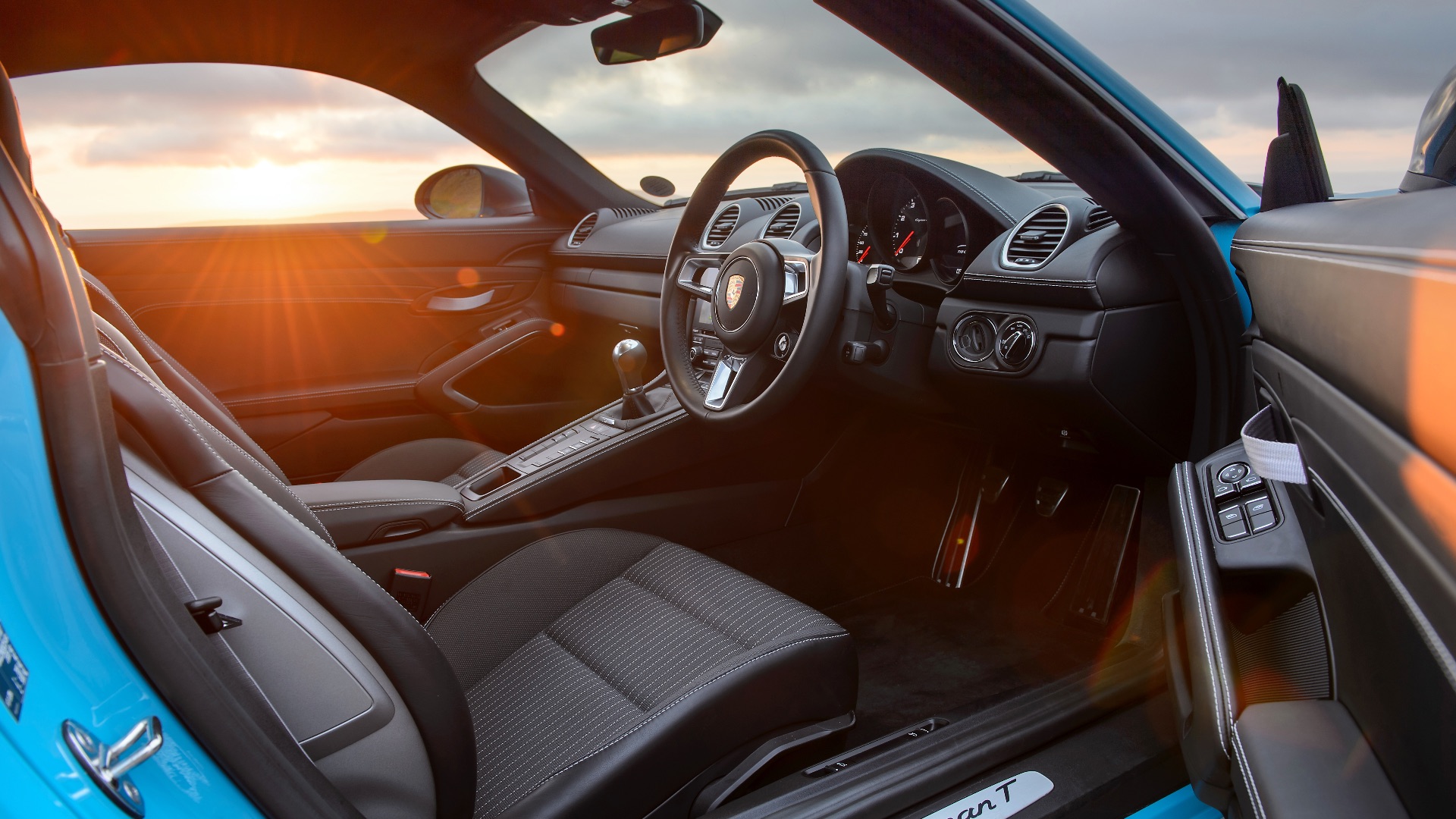 OK, full disclosure: this isn’t Top Gear and I’m not Jeremy Clarkson. So I won’t be racing the Stig up a runway. Nonetheless, I’ve set my alarm unsociably early and planned a long, cross-country loop on favourite Kent and Surrey B-roads. Frankly, if the Cayman T can’t shine here, it doesn’t deserve those stripes. Or straps.

My Cayman T came with the £2,303 paddle-shift auto gearbox, which seems less aligned with its hardcore ethos than the six-speed manual. Then again, the PDK ’box – it stands for Porschedoppelkupplung, if you must know – is telepathically intuitive and whipcrack-quick, so I hardly feel short-changed. It’s good enough for the 911 GT3 RS, after all.

Other extras fitted included cruise control, park assist and dynamic LED headlights, boosting the price from £54,358 to £66,761. Not quite such good value now…

Big fan of the pinstripes. Those fabric door handles save *some* weight. pic.twitter.com/MofrHYtBiR

Thankfully, none of the add-ons are really necessary; this Porsche is all about driving. Mid-engined and beautifully balanced, it’s one of the finest handling cars on sale. It corners flat and focused, its angle of attack adjusted by your right foot as well as your hands. The weighty steering, powerful brakes and modest dimensions all imbue instant confidence. Hedge-lined lanes that feel narrow in a new ‘992’ 911 are a perfect fit for the compact Cayman.

The oft-heard complaint about the 718 concerns its flat-four engine, which sounds a bit, well, like a Subaru. Pressing a button to open the exhaust baffles doesn’t change that – it simply adds volume – but it’s less of an issue than some suggest. Nonetheless, while the 300hp T feels brisk, and offers plenty of turbocharged torque, it only really comes alive beyond 4,000rpm. I’d certainly welcome the extra oomph of the 350hp Cayman S. 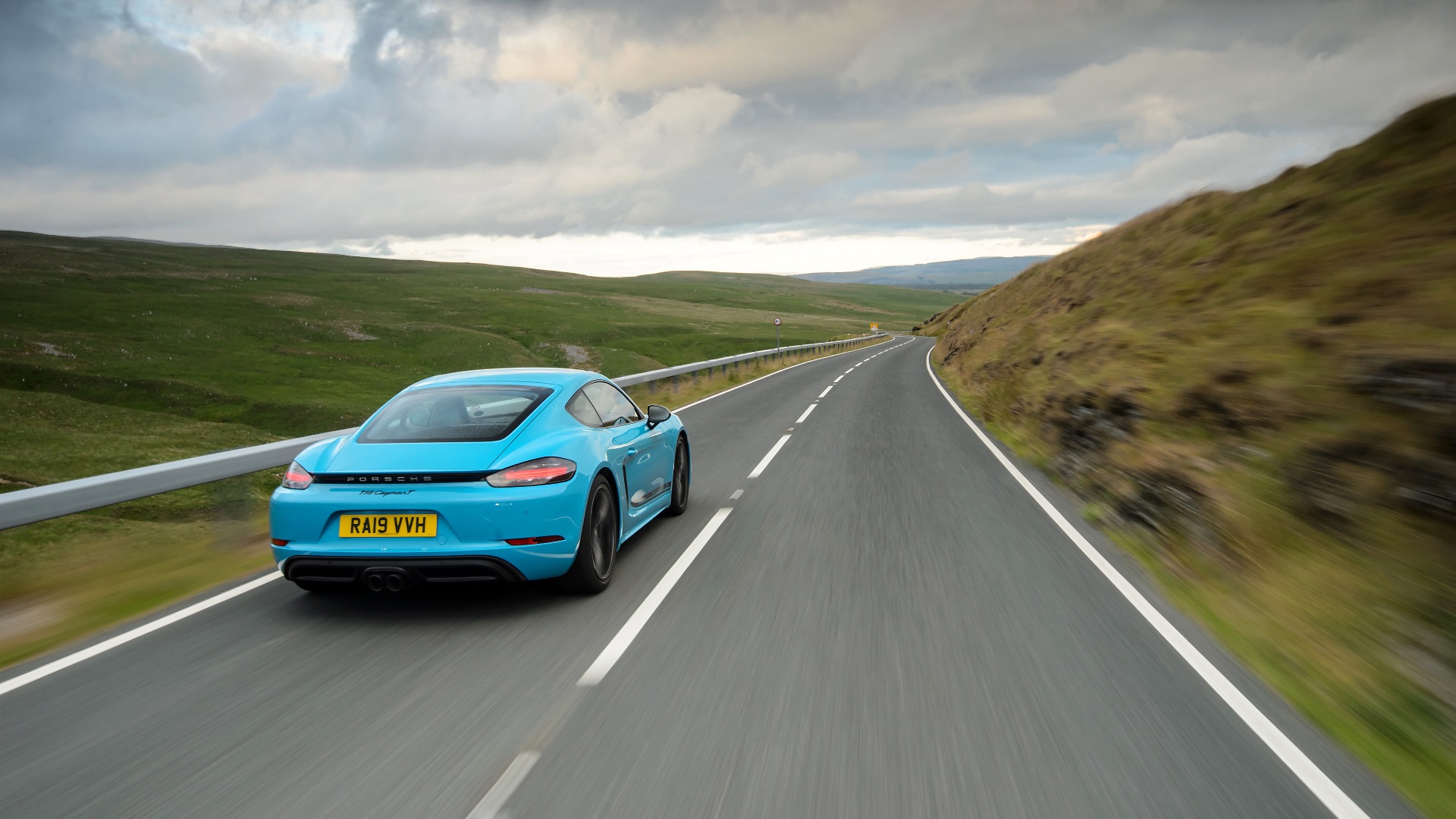 I’m not totally sold on the T’s stiffer and 20mm lower suspension either. Combined with rubber-band 25-profile tyres, its ride in the sport setting is to brittle for British tarmac. Doubtless it would be brilliant on-track, or indeed in Germany. But the more supple standard car is better suited to our roads.

And there’s the rub. Like the letter ‘T’ in Porsche folklore, this Cayman can’t decide what it wants to be. It has flashes of brilliance, yet feels compromised for daily driving. Even so, the Cayman is still the £50k sports car I’d choose, despite rivals such as the Alpine A110 and Toyota GR Supra looming large in its mirrors. Just forgo a couple of options and buy the S instead. 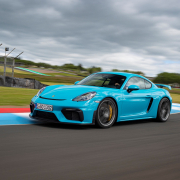 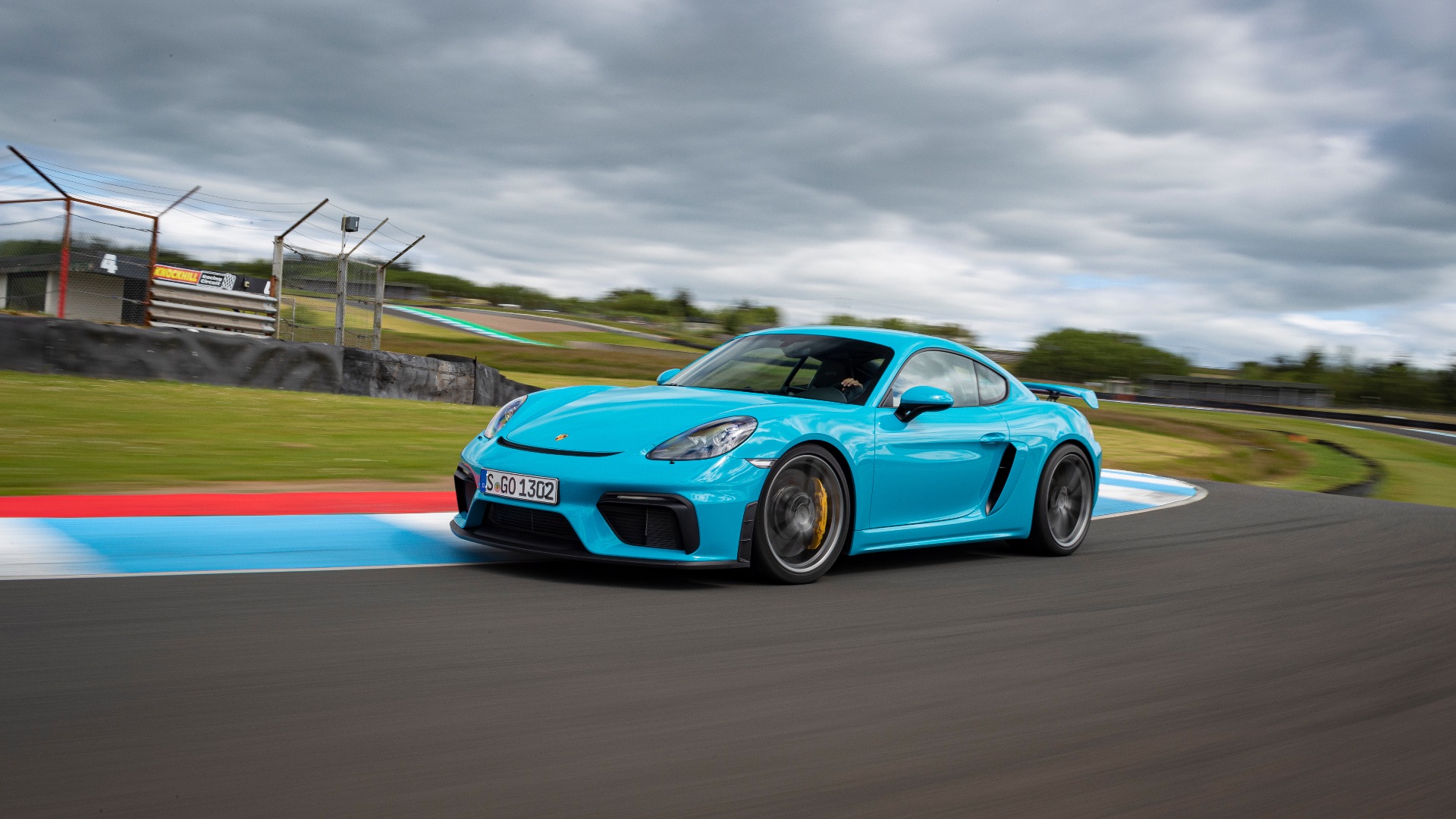 A free-breathing flat-six mounted in the middle. A manual gearbox. Rear-wheel drive. And a lightweight, shrink-wrapped body tailor-made for Welsh B-roads. The old Cayman GT4 was pretty close to perfect, an instant icon. Which gave Andreas Preuninger, head of Porsche’s go-faster GT division, an unenviable task. For a car where less is more, how do you offer, well, more?

The new GT4 still has six cylinders, whereas lesser 718 Caymans make do with four. It’s still naturally aspirated, with no turbos to mute the soundtrack or soften right-pedal response. It still has a manual ’box, although a paddle-shift PDK arrives next year. And it remains lighter (1,420kg) and usefully smaller than the ever-expanding 911. The differences here are in the details, and they coalesce into something that surpasses even the 2015 original. 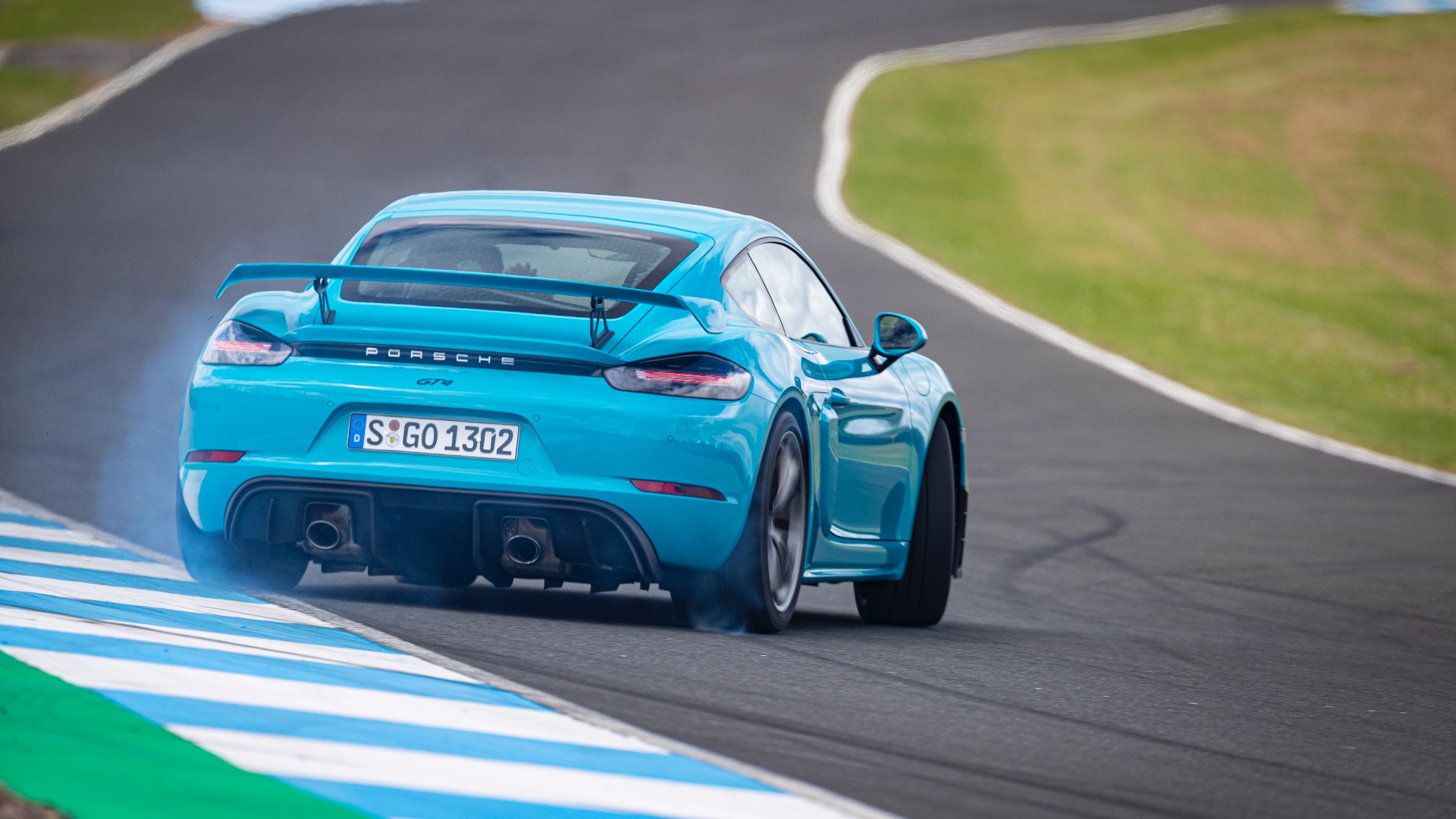 This latest GT4 also has a soft-top sister in the Boxster Spyder. The open version is mechanically identical and also shares the same chassis, with variable PASM damping and 30mm lower suspension. The Cayman’s upswept diffuser and fixed spoiler (the Boxster has a pop-up wing) muster up to 50 percent more downforce with no extra drag. Porsche says both cars are ‘specifically designed for use on the racetrack’.

I won’t be venturing on-track today, but the rollercoaster roads around Wantage – close to the Cotswolds – are the next best thing. I arrive at Porsche HQ in Reading, collect a 911-shaped key and collapse clumsily into a carbon bucket seat (a £3,788 option). The infotainment looks dated and the fabric door pulls are a token gesture, yet the GT4 still feels special – particularly with a half-rollcage (part of the £2,778 Clubsport Pack) inches behind my head.

Not sure on the price as tested as this car is LHD German-spec. Options fitted, though, include carbon-ceramics (£5,597) and the Clubsport pack (£2,778). pic.twitter.com/XK0mpoGYdc

Around town, the engine sounds fretful and uncouth: a pit bull straining at the leash. Light the fuse, though, and it breaks free with a belligerent bellow, chasing the 8,000rpm redline with frenzied intensity. If super unleaded is your drug of choice, this is Class A contraband. The six-speed stick-shift is quick and accurate, blipping the throttle automatically when you change down, while the PCCB carbon-ceramic brakes (another option, at £5,597) are totally fade-free. 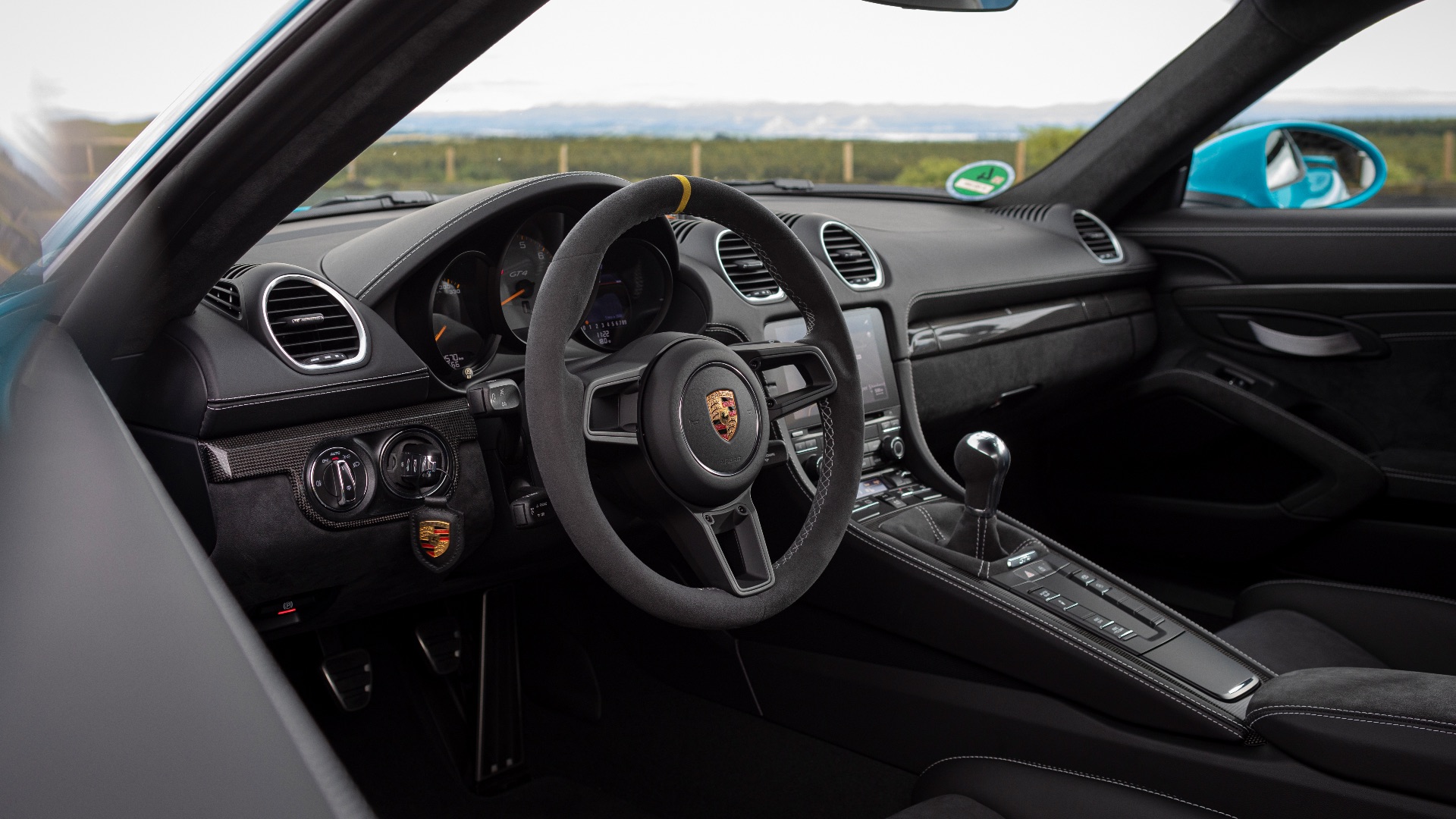 Still, it’s the steering I savour most. Devoid of any buttons, the Alcantara-wrapped wheel has just one purpose: being a constant and joyful font of feedback. The Cayman turns in with unflappable resolve and virtually no sense of inertia. It feels taut but complaint, like a loosely clenched fist, while the lightly-treaded Michelin Cup 2 tyres form a molecular bond with the road. That said, it might be rather less reassuring on a rainy day.

Andreas Preuninger recognised the essential rightness of the GT4 and hasn’t reinvented the recipe. It’s a couple of years since I drove the first-gen car and, from memory, the new one doesn’t feel hugely different. The improvements here are incremental. Thankfully, that means this remains one of the most lucid, tenacious, exuberant and downright exciting cars on sale. Short of spending six figures on a supercar, I’m not sure anything betters it.