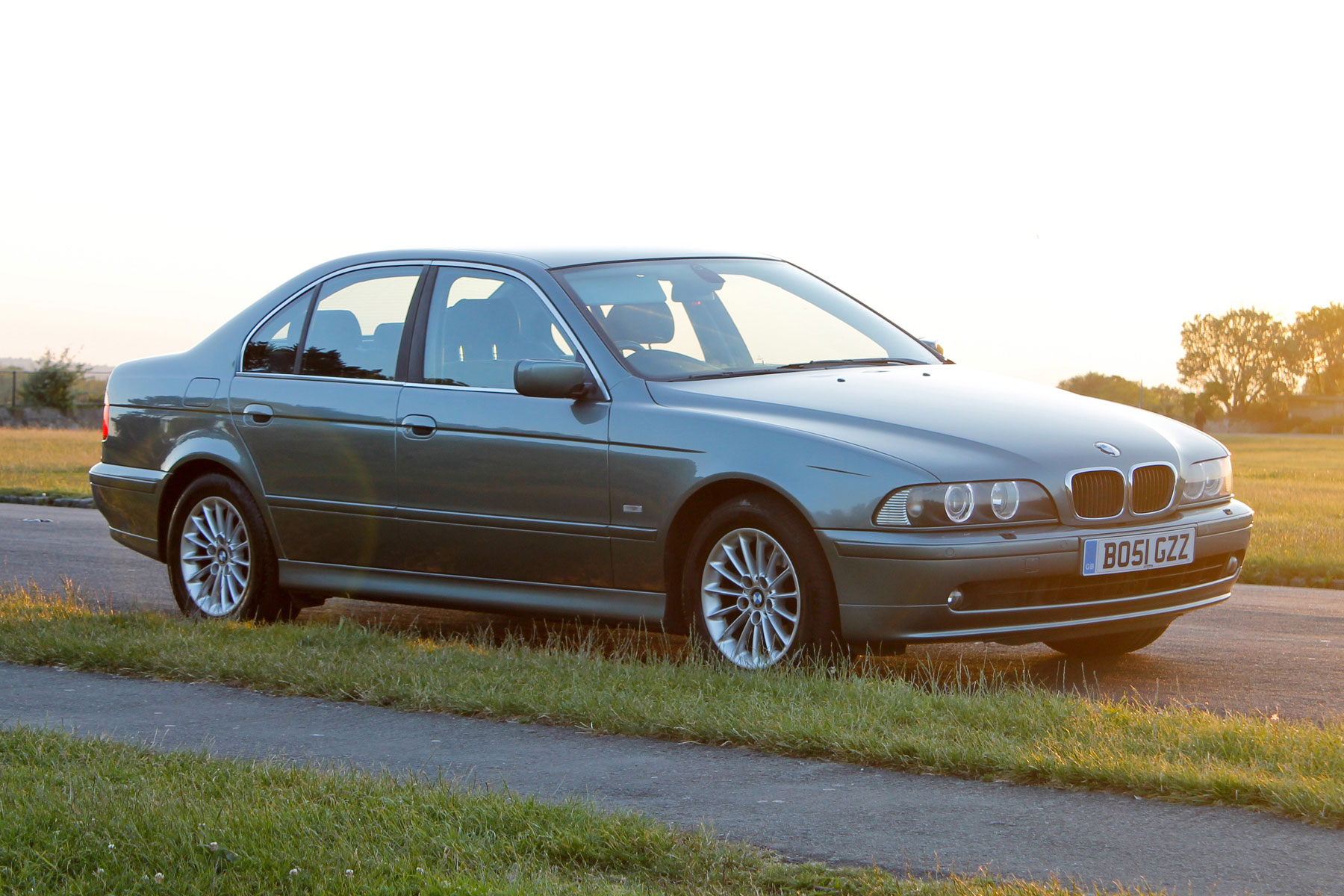 When a man is bored of manuals, he is bored of life, or so some petrolheads would have you believe. I beg to differ. In fact, when stuck in the M25 rush hour grind on a Friday evening, I challenge you to tell me that an extra pedal and a choice of ratios (none of which ever seem to be quite right as the traffic pulses forward) would make the experience more pleasurable. With a motorbike in the garage for sunny weekends, I needed something that would suck up daily drudgery without fuss.

So enter my waft-tastic barge: a 2001 BMW ‘E39’ 530i. This is about at home on the outside lane of the motorway as a suit jacket would be hanging in its back window.

The 3.0 litre petrol in BMW’s traditional straight-six format has just about enough urge to shift its bulk, if nothing more. A V8-powered 540i would’ve suited it better, but they go for three times as much, and it would be bold to claim an extra 1.4 litres of displacement would have made the car three times better. 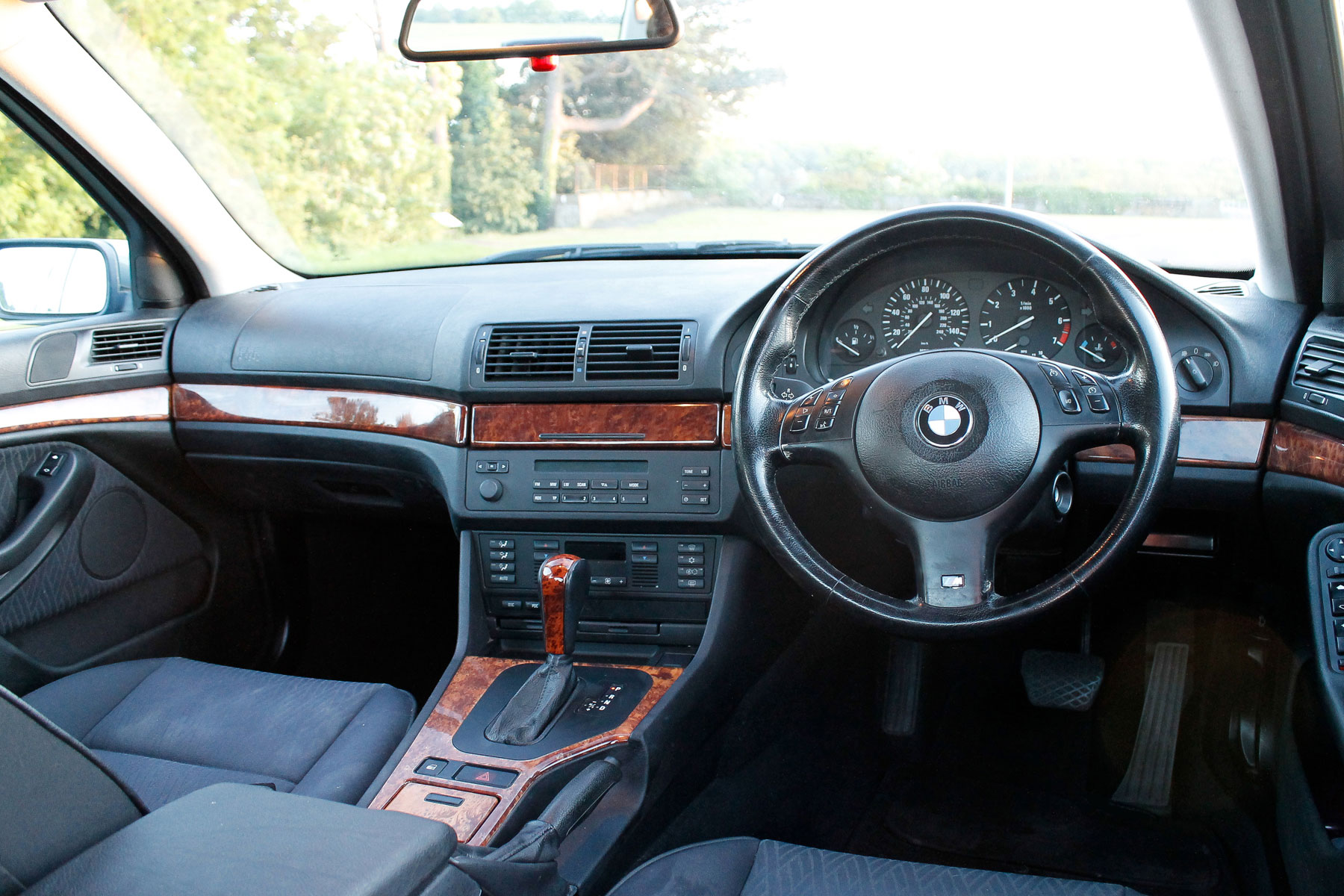 Inside, the cabin has everything a middle-ranking exec would’ve wanted in 2001: a decent stereo, cruise control and climate control (which, unlike most 15 year old sheds, didn’t ‘just need a re-gas’, and worked perfectly in Wednesday’s 37 degree heat). In fact, the only feature it lacks it a bit of cowhide on the seats.

Usual E39 problems include cooling systems, automatic gearboxes, a 50mph steering wobble, and, as you might suspect of car that could’ve spent twenty years on Britain’s salty roads, rust.

I chose mine on the basis that it was rust free, had had most of the cooling system replaced recently, and the autobox had been refurbished 30,000 miles ago. The 50mph shimmy is present, but that just gives me another excuse to drive faster…

And the cost? This facelift SE spec car set me back precisely £1000. It may be 15 years old and currently sitting on 160,000 miles, but bar the steering wobble, a loose mirror housing and some broken cup holders, you really wouldn’t know. Forget ‘Shed of the Week’, for me this is the shed of the century!

What next then? I’m quite infatuated (if you hadn’t already worked it out), so I think the ‘Fünfer’ will be a keeper. It can manage mid-30s mpg on a run and high-teens in town, but I’m tempted to stick an LPG kit on it and halve my running costs – what would you do? 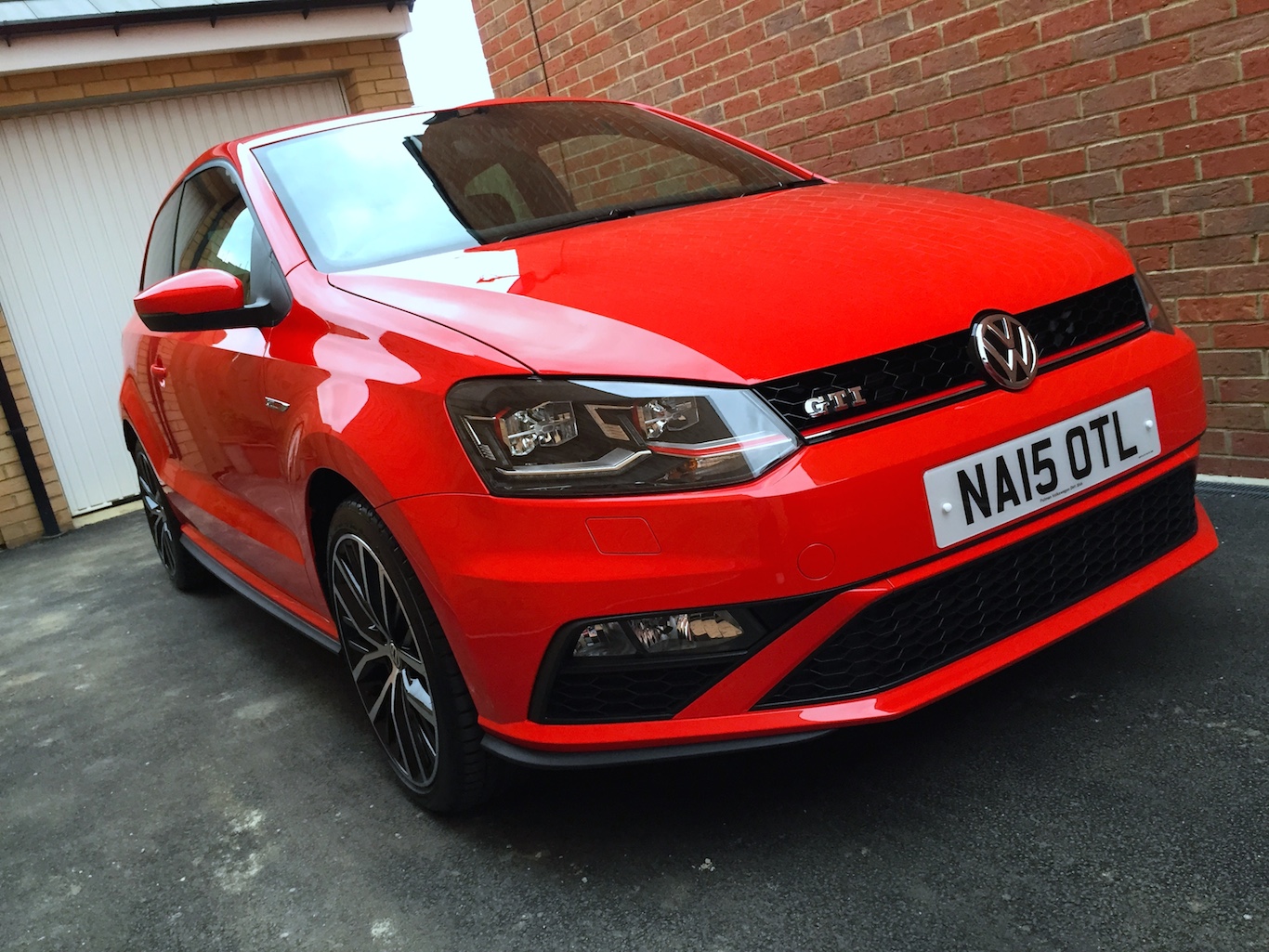 So, this is my new car. By new I mean it is literally box-fresh, having covered a grand total of about 16 miles when I collected it. 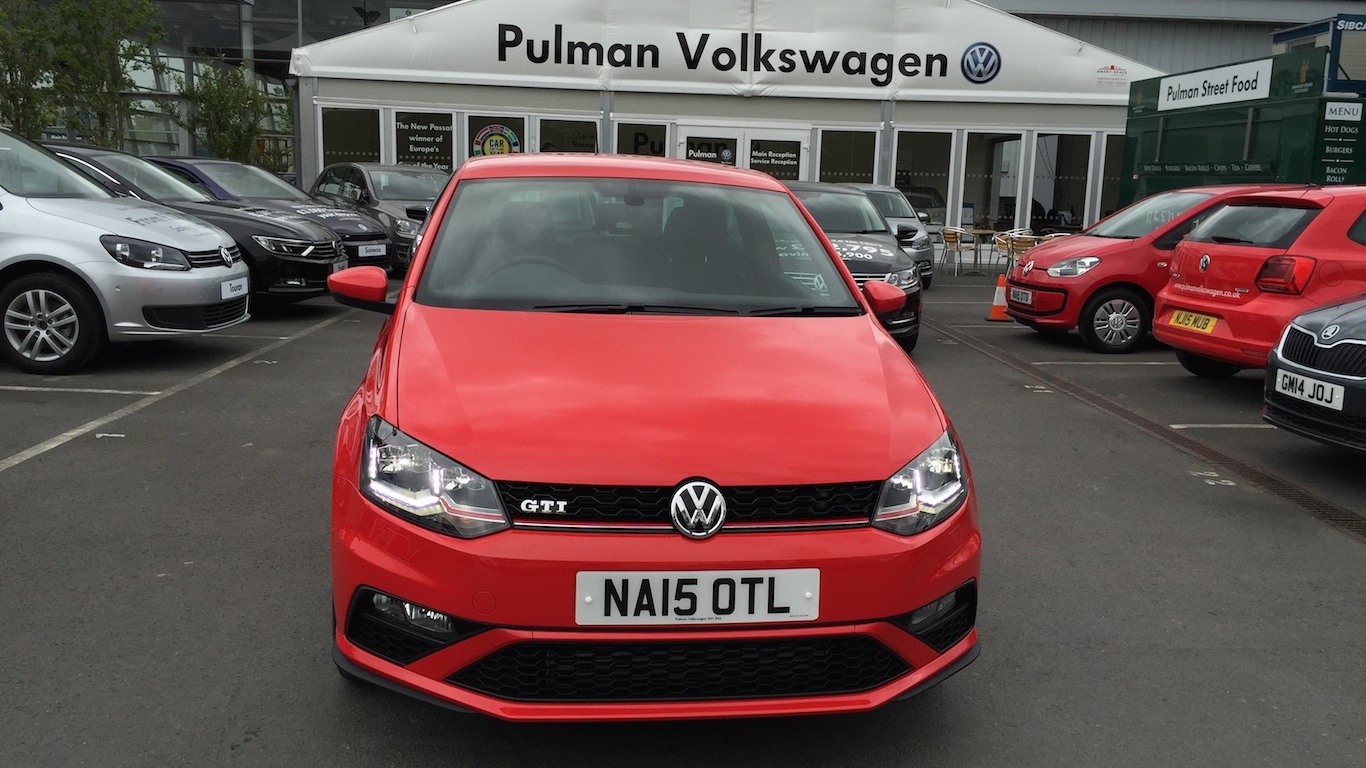 That car was, like this new one, a three-door in Flash Red so you could say I’m attempting to recreate something from my youth. However, ten years ago I only had 123bhp to play with, rather than the 189bhp under the bonnet of this new born. My brief experience with it so far has taught me that such power turns this GTI into a serious hot-hatch. 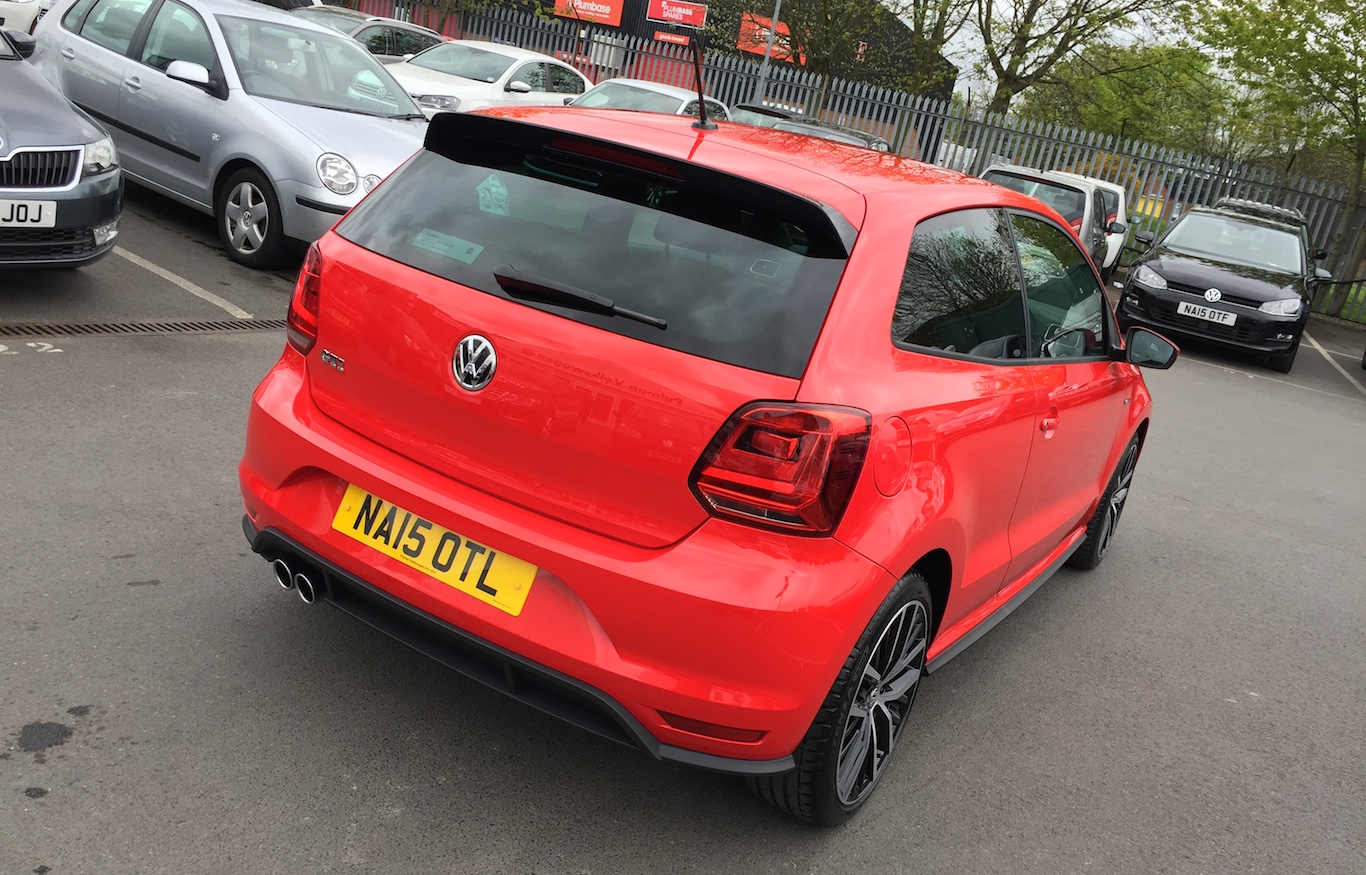 The Polo GTI has often (unfairly) had to live in the shadow of its bigger Golf brother, but I’ve always been a fan of the underdog. Plus, with the ever-increasing size of cars on our roads, the latest Polo GTI is virtually identical in dimensions to the hallowed Mk2 Golf GTI. Could that make for an interesting matchup?!

I’ve kept the ticks on the options list relatively short with only electronic climate control, automatic lights and wipers, and the Sport pack being my choices. The latter is rather important, given the name of my blog, but it also transforms the GTI into something rather harder edged. I’ll be finding out whether engaging Sport mode can be an everyday occurrence, or something saved for special occasions. 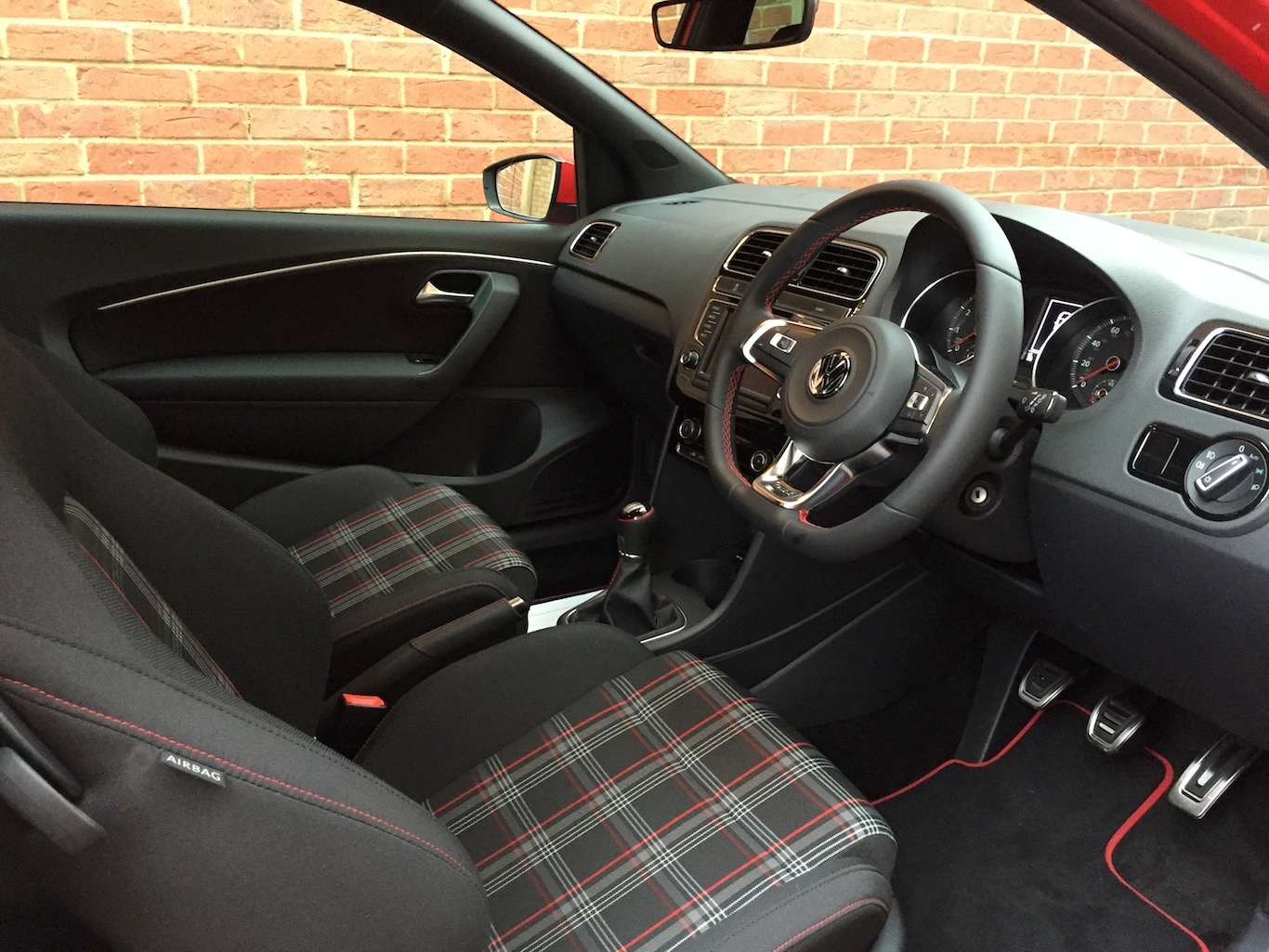 For now I’m off to put some extra miles on the GTI, and to see if we can find a Mk2 Golf GTI… 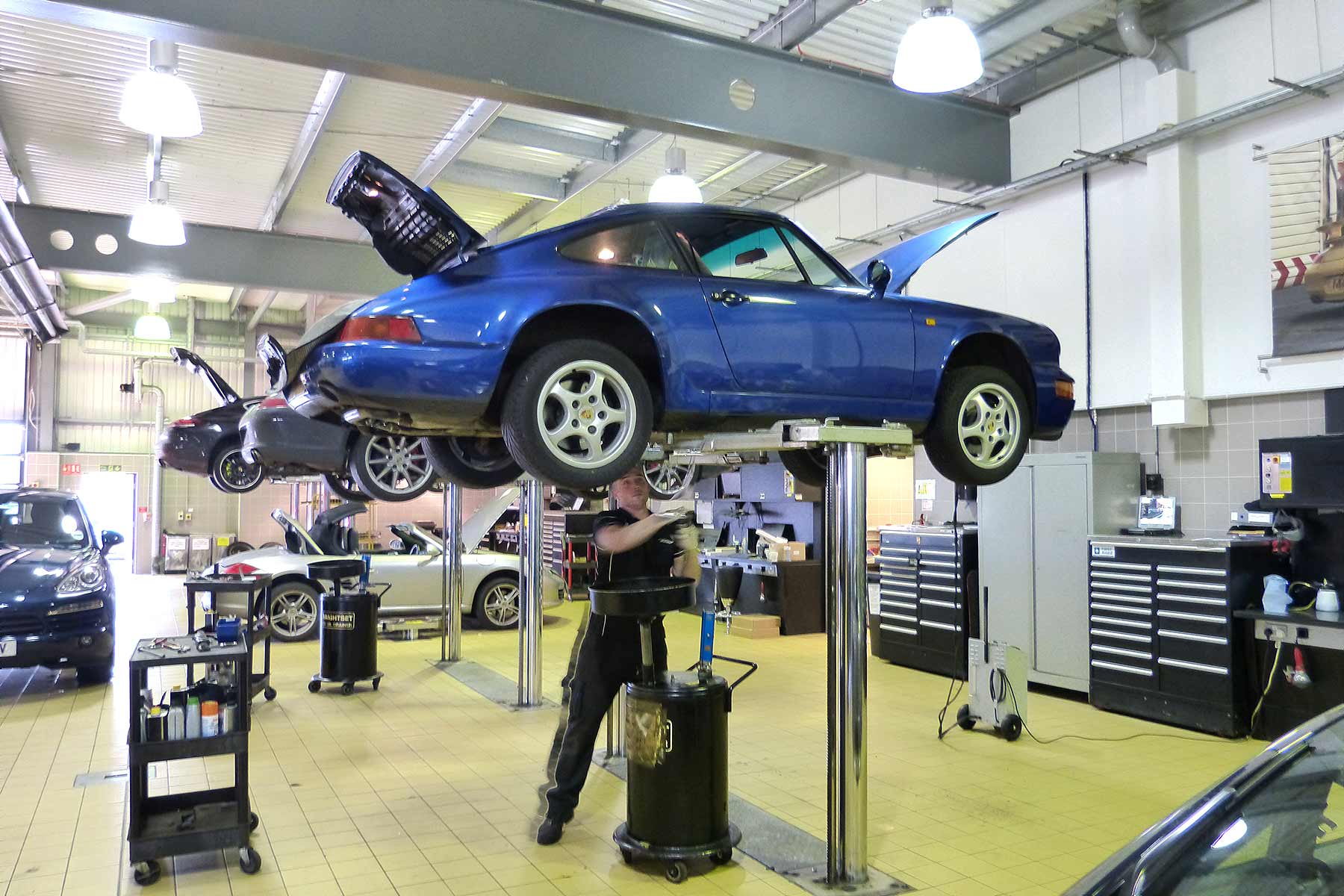 My Porsche 911 does what all old Porsches do, but especially if they are of the 964 (‘89-‘93) variety. They leak oil. END_OF_DOCUMENT_TOKEN_TO_BE_REPLACED 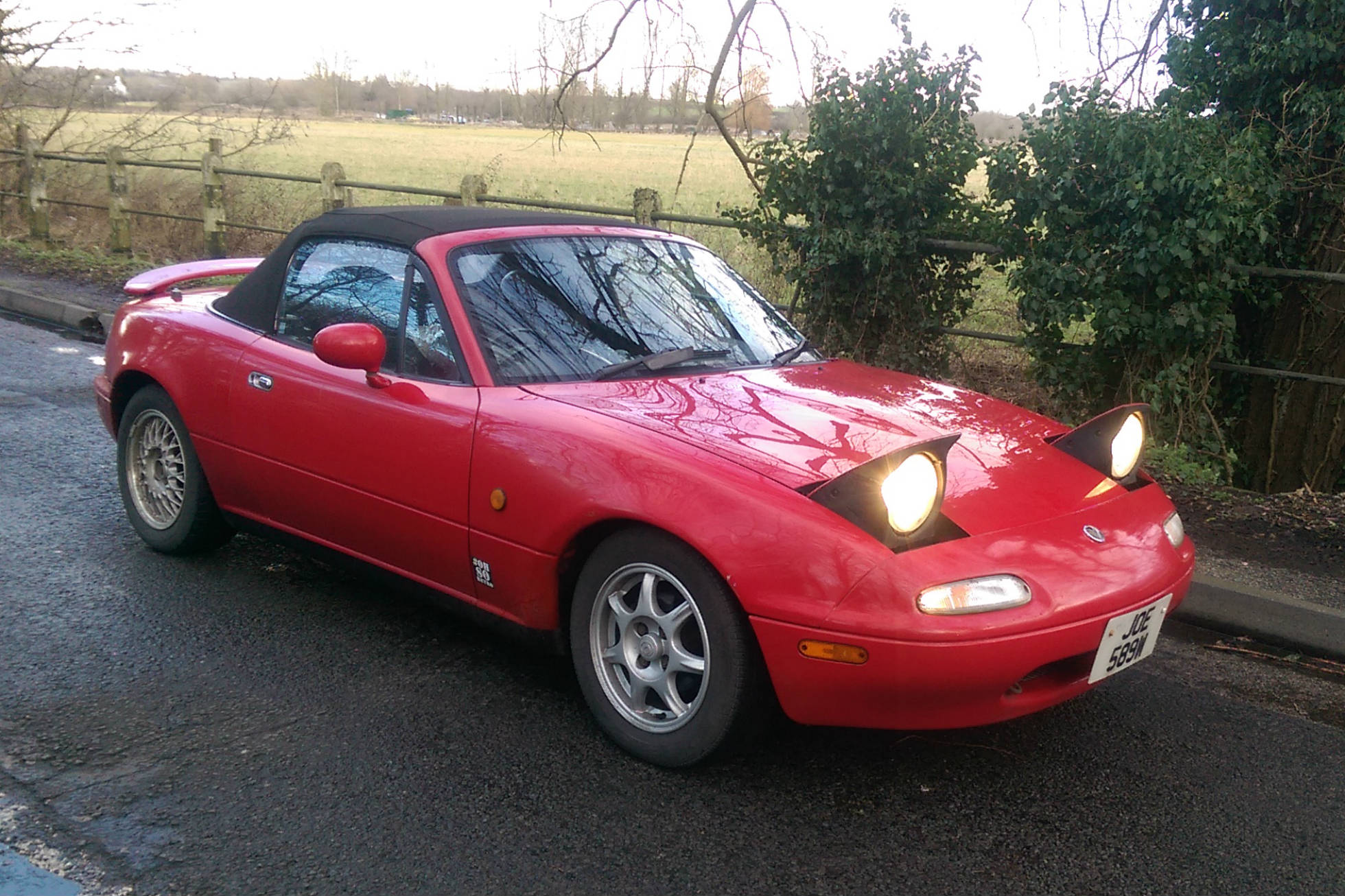 Did you make any car-related new year’s resolutions this New Year? I did – not to buy any cars. In 2014, I sold my beloved Mazda MX-5, bought a BMW 5 Series which turned out to be a shed, and ended up with a Ford Puma which I actually rather liked.

END_OF_DOCUMENT_TOKEN_TO_BE_REPLACED 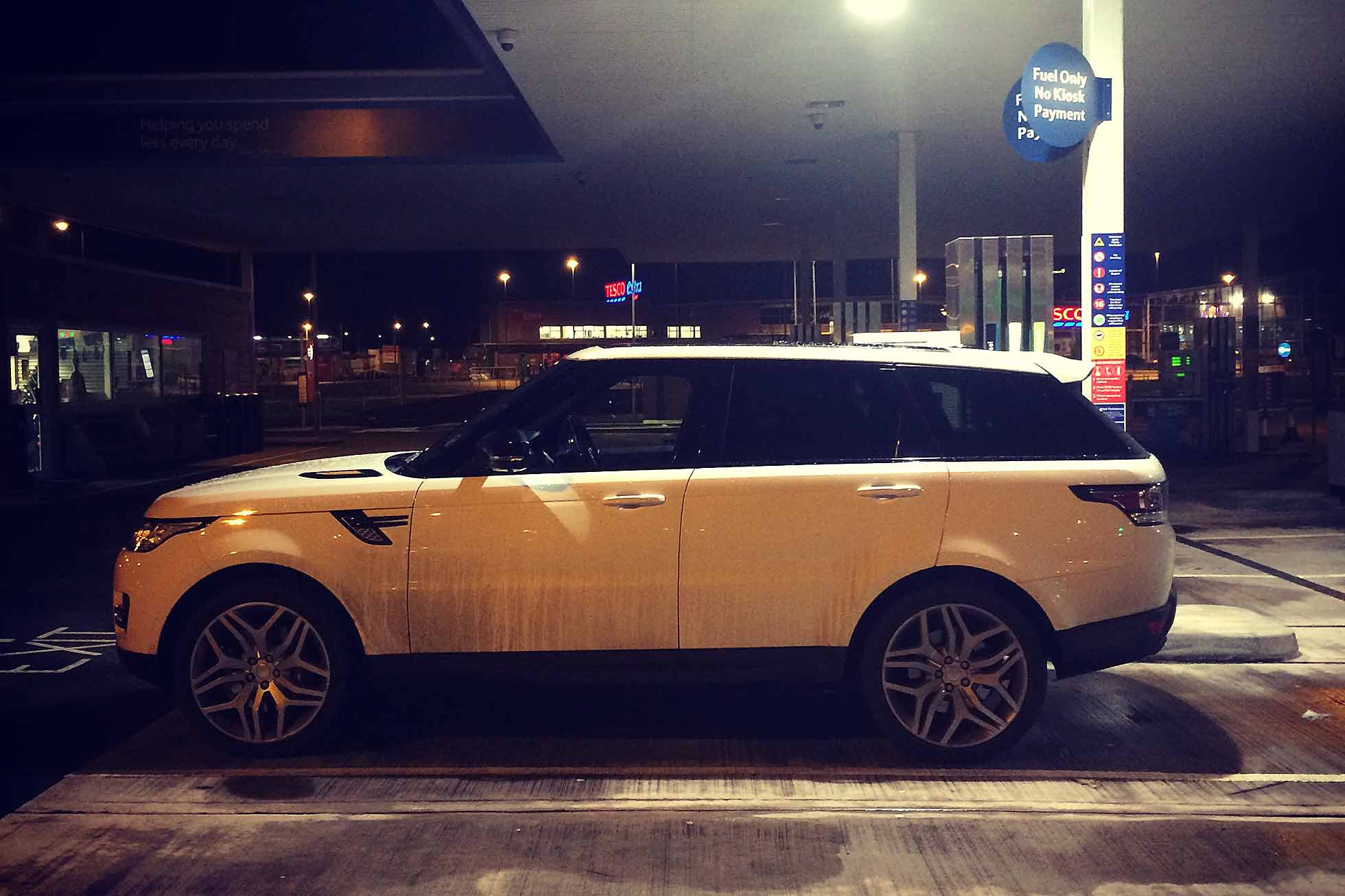 Over Christmas, I was lucky enough to enjoy the V8 supercharged splendour of a supercharged Range Rover Sport. END_OF_DOCUMENT_TOKEN_TO_BE_REPLACED 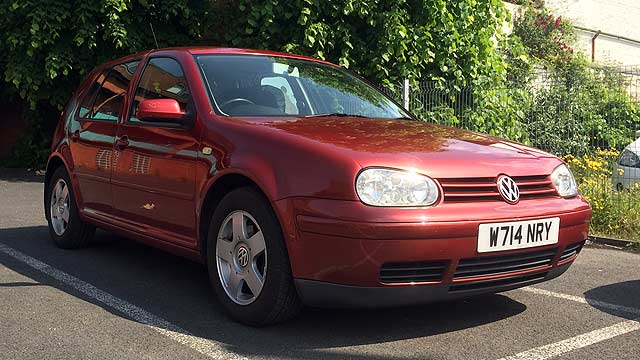 It’s always a worry when you buy a ‘new’ secondhand car: will it pass the first MOT you put it through? END_OF_DOCUMENT_TOKEN_TO_BE_REPLACED

It’s always a worry when you buy a ‘new’ secondhand car: will it pass the first MOT you put it through? END_OF_DOCUMENT_TOKEN_TO_BE_REPLACED 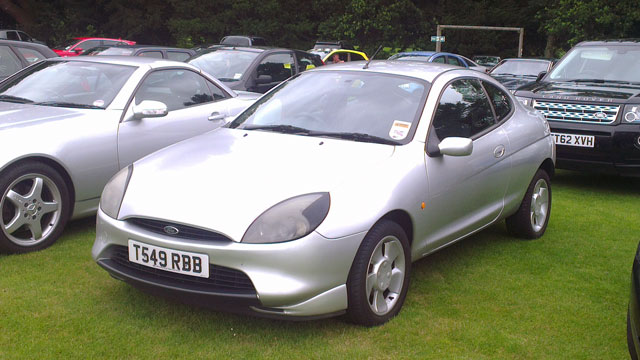 Apparently, if you buy an old BMW for £595 it will go bang sooner or later. At least, the one I bought did.

END_OF_DOCUMENT_TOKEN_TO_BE_REPLACED 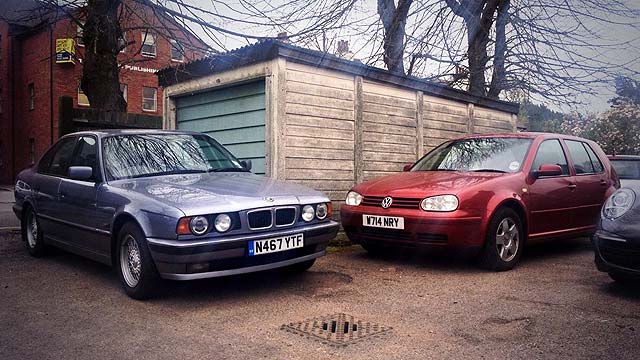 When I buy a car, and press it into regular use, it certainly gets driven. Plenty. The commute to work alone is 100 miles. Each way.

END_OF_DOCUMENT_TOKEN_TO_BE_REPLACED

When I buy a car, and press it into regular use, it certainly gets driven. Plenty. The commute to work alone is 100 miles. Each way.