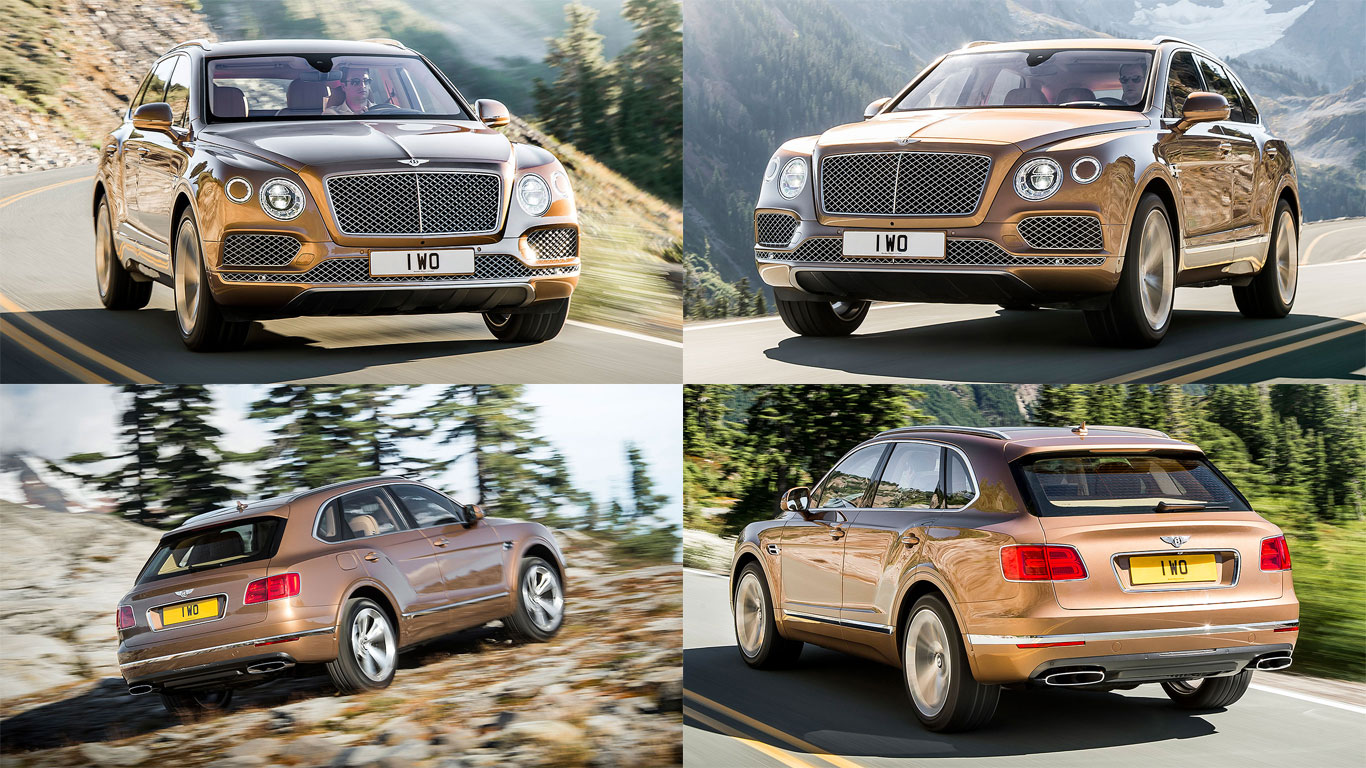 The new Bentley Bentayga SUV has been revealed ahead of its public debut at the 2015 Frankfurt Motor Show next week.

And you can come out from behind the sofa now, because the Bentley Bentayga isn’t as scary as the EXP 9 F concept led us to believe. Still has a silly name, mind. 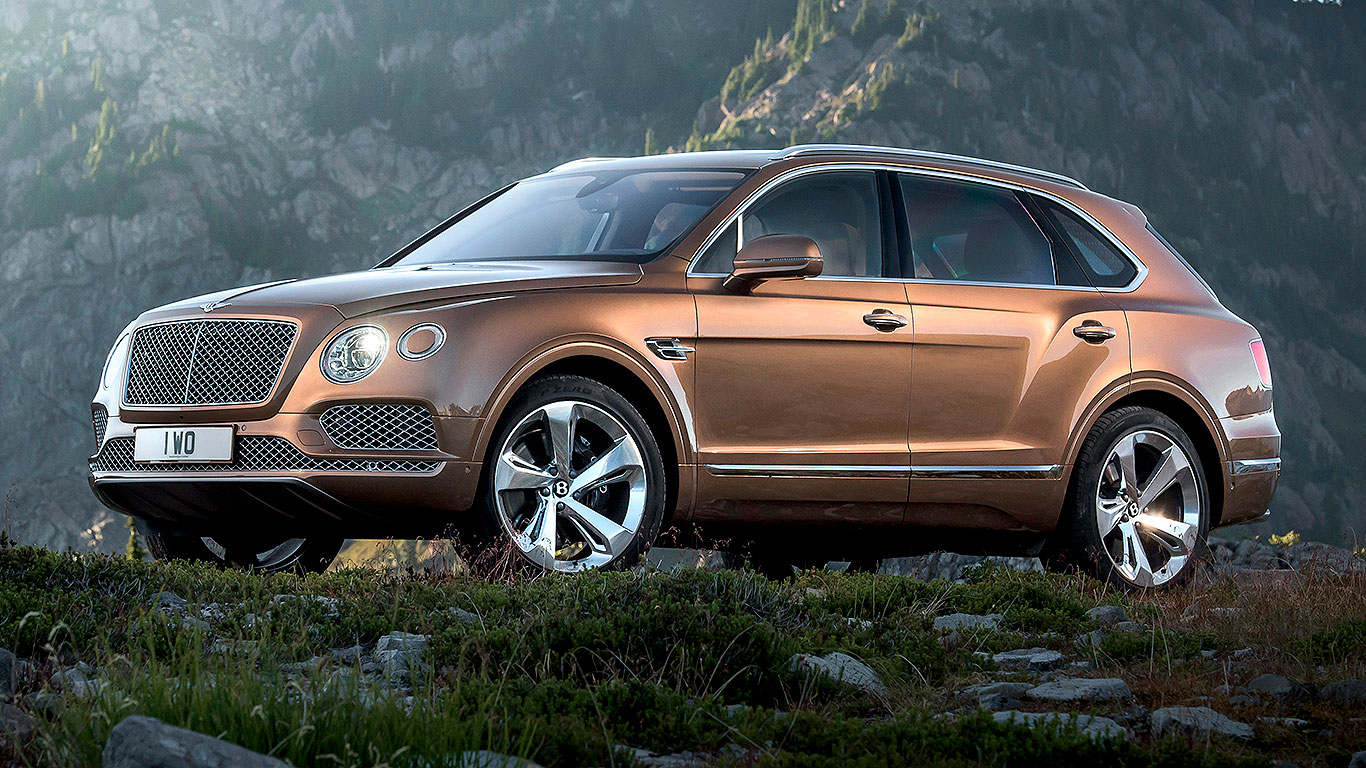 Bentley isn’t afraid to roll out a number of superlatives and Top Trump style claims to support the launch of the new Bentayga. Are you sitting down?

OK, well according to Bentley, the Bentayga is ‘the fastest, most powerful, most luxurious and most exclusive SUV in the world’, making it the SUV to beat all SUVs, right?

Bentley ventured across five continents during the development of the Bentayga, claiming to have undertaken the most exhaustive programme in the brand’s history. Dirt and gravel in South Africa, the dunes in Dubai, mud in Crewe and the freezing temperatures of the North Cape, the Bentayga has been there, done that. Not to mention 400 laps of the Nürburgring.

From EXP 9 F to Bentayga 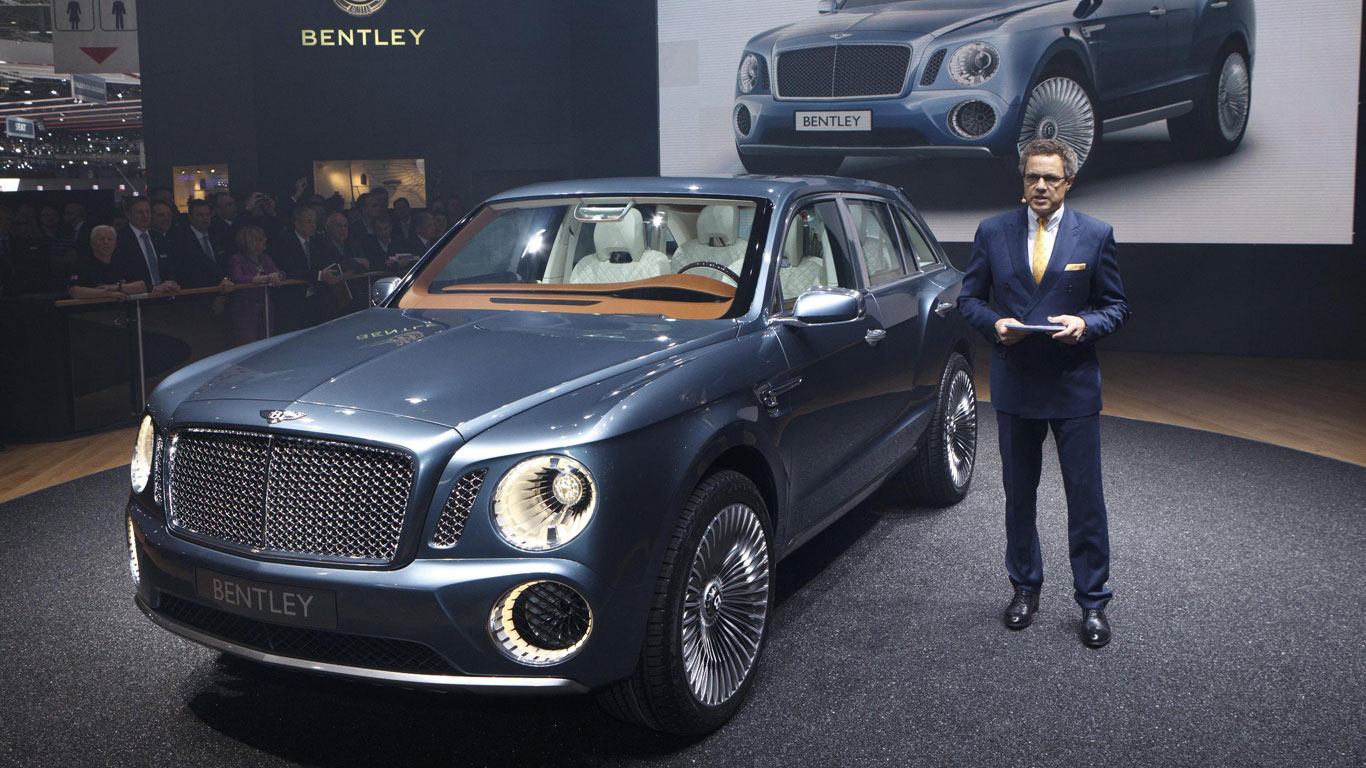 Bentley’s first SUV has come a long way since its debut as the EXP 9 F concept of 2012. It’s fair to say the concept didn’t receive unanimous support at the Geneva Motor Show.

Back then, Bentley spoke of positioning the SUV above the likes of the Range Rover, Porsche Cayenne Turbo S and Audi Q7, charting new territory for a car of this ilk.

At the time, the idea of a Bentley SUV hadn’t been granted full board approval, but given the popularity of SUVs, it’s no surprise to see the EXP 9 F becoming a reality. 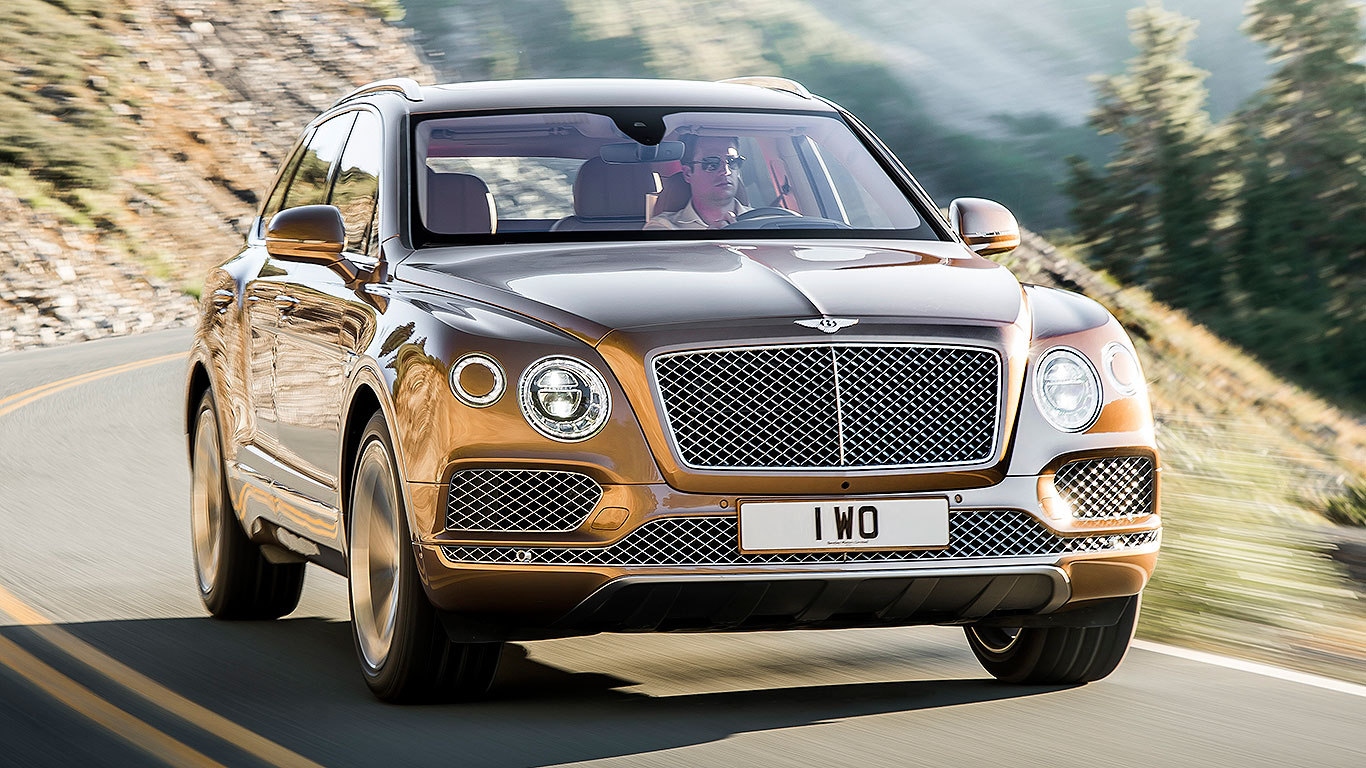 The Bentley Bentayga is powered by an all-new 6.0-litre twin-turbocharged W12 engine developing an almost ridiculous 599hp at 5,250-6,000rpm.

And we haven’t even mentioned the 664lb ft of torque between 1,250 and 4,500rpm. The Bentayga has just upped the ante in the powerful SUV stakes.

All of which means the Bentley Bentayga has a top speed of 187mph and a 0-62mph time of 4.1 seconds. You may not like the idea of a super SUV, but these figures are astonishing.

Amazingly, the Bentayga emits ‘just’ 292g/km CO2, in part thanks to Bentley’s Variable Displacement system, allowing the engine to run as a six-cylinder.

Release the throttle in gears 5th to 8th and the Bentayga will open the torque convertor, dropping the engine to idle and allowing the SUV to coast, thus saving fuel.

At launch, the W12 is the only engine available, but Bentley will offer diesel and hybrid variants in the future. It’s unlikely that these will offer the same jaw dropping performance figures.

Bentley claims the Bentayga offers the widest range of on- and off-road drive settings of any vehicle. It’s all thanks to the Drive Dynamic Mode and optional Responsive Off-Road Setting.

As you’d expect, the Bentley Bentayga is loaded with the latest array of safety and support mechanisms, including adaptive cruise control, park assist, traffic sign recognition and night vision.

None of this will shield you from the attention you’ll almost certainly receive when driving the Bentayga. It’s certainly better looking than the concept, but it’s hardly subtle.

At the front you’ll find swathes of in-your-face mesh and what Bentley calls ‘floating’ all-LED headlamps. Beauty, they say, is in the eye of the beholder. You can make up your own mind.

The rear end is far less offensive with lights that feature B-shaped illumination graphics. The large Bentley badge is a helpful reminder of what has just overtaken you.

But if the exterior styling is up for debate, there can be no doubts about the interior. According to Bentley, it’s ‘the world’s finest cabin’, so read on to find out why.

The dashboard has been inspired by Bentley’s ‘wing’ design and can be finished in one of seven different veneers. Oh, and did we mention the 15 different interior hides?

Highlights include the Bentley knurling on the drive mode selector, gear knob, bullseye vents and organ pulls. One can also select from 15 different carpets.

Almost as good as the rear seats, which can be ordered in either two- or three-seat configuration. Opt for the former and you’ll be treated to 18 different adjustments, massage, ventilation and footrests.

Open the hands-free tailgate to reveal 430 litres of boot space (590 with the load cover retracted) and a fixed back, dividing the cabin from the boot.

Should sir or madam wish, the boot can be ordered with a folding event seat, presenting a viewing platform for use at the polo or cross country eventing.

At launch, the Bentley Bentayga is available with an integrated Mulliner hamper set, complete with fridge, fine china cutlery, crockery and crystal glass. You can also order a Mulliner Tourbillon by Breitling clock.

Deliveries will commence in early 2016, by which time Bentley will have released prices for the Bentayga. Don’t expect much change from £150,000. 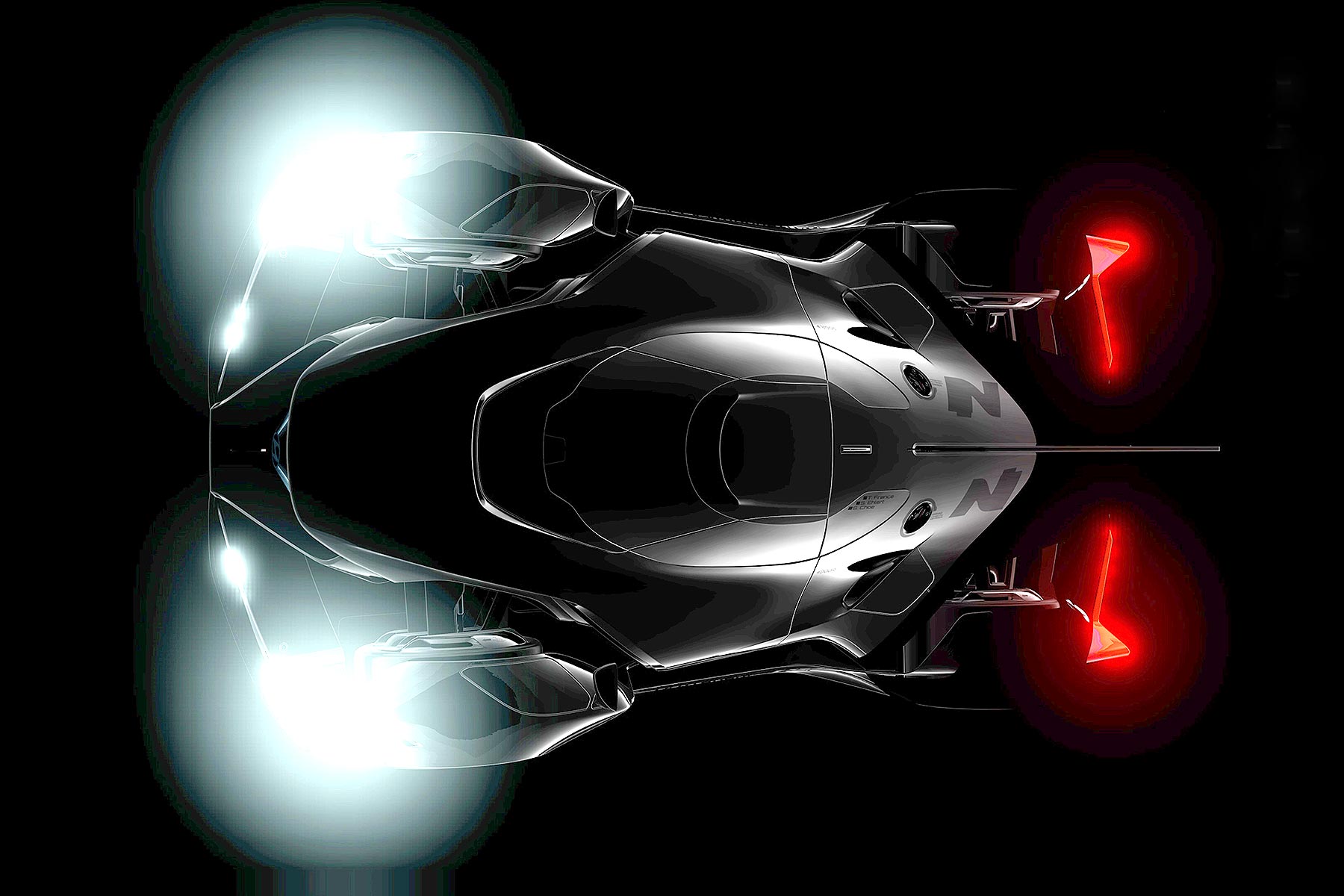 Hyundai N, the firm’s performance sub-brand rival to Nissan Nismo and SEAT Cupra, will make its world debut at the 2015 Frankfurt Motor Show next month – on a radical supercar concept.

The brand will feature on a concept created for the Gran Turismo franchise, called Hyundai N 2025 Vision Gran Turismo: yes, Hyundai’s using its opportunity of becoming the latest maker to roll out a Gran Turismo ‘vision’ car as the chance to launch its new performance car division.

The extra publicity from the younger audience it’s targeted with appealing to thus comes for free. Clever Hyundai.

Hyundai will also show a mid-engine concept car called RM15 that will show “how the Hyundai N driver-focused technologies could come into production”. 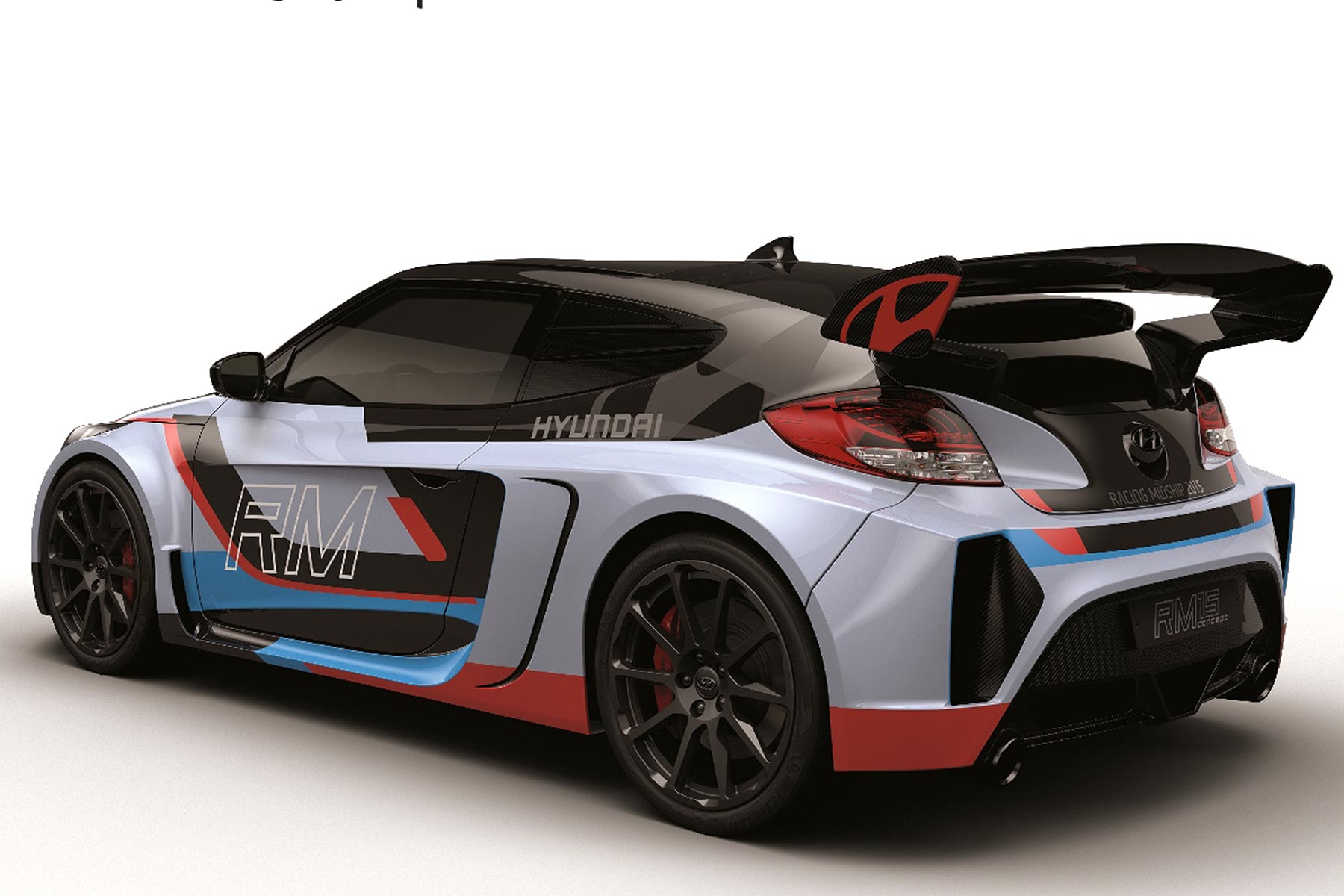 Curiously, this appears to be a mid-engined version of the Hyundai Veloster, a car that’s long since been withdrawn from the UK due to slow sales. Could Hyundai possibly be planning a Renault Clio V6-style low-volume special..?

We also wonder if the 300hp 2.0-litre engine it uses is a preview to the motor we’ll perhaps see in a Hyundai i30 N hot hatch rival to the Honda Civic Type-R.

N “capitalises on Hyundai Motor’s fast-growing strength and signifies the pace of change within the brand,” says the firm.

It’s all about “matching the company’s ambition to challenge perceptions by making real and emotional connections with customers”.

All will be revealed about Hyundai’s first-ever performance sub-brand at the 2015 Frankfurt Motor Show on 15 September. 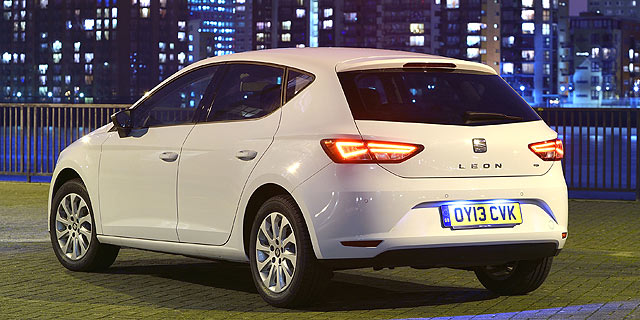 The future of SEAT is in producing functional, practical cars rather than super-hot sporty models, new MD Juergen Stackmann has told MR.