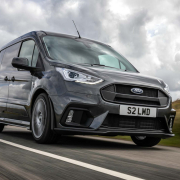 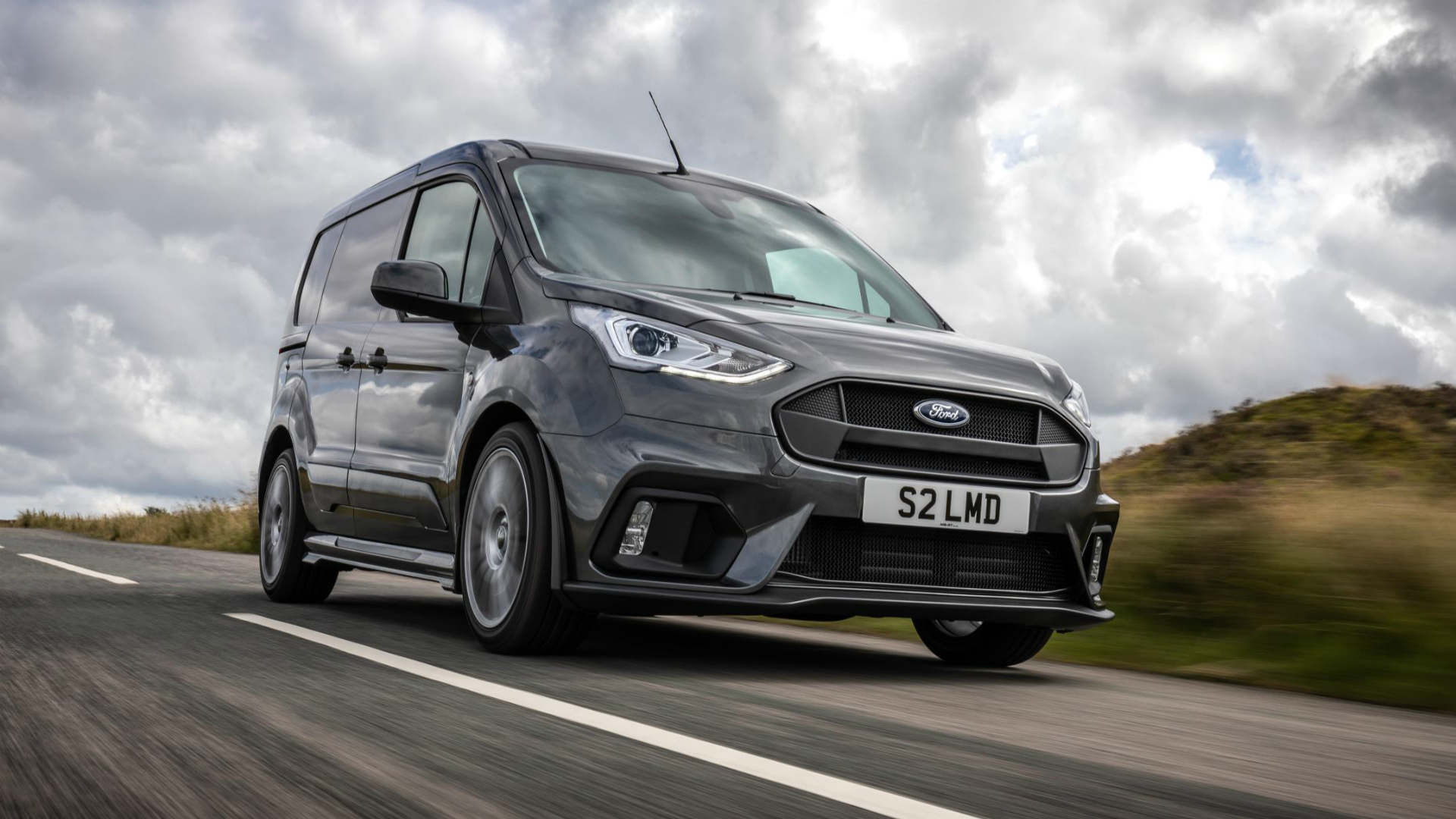 I don’t remember the last small Ford van I drove with a great deal of fondness. It was around the turn of the millennium, and the van – a white Ford Escort – must have been four, maybe five years old.

It was a rental van, so the years hadn’t been kind to it. Forget ‘one careful owner’, this thing had endured a lifetime at the hands of wreckless renters with as much mechanical sympathy as Ken or Ryu when faced with a Lexus LS400.

Not that a pair of streetfighters would ever mistake an Escort van for a Lexus. Besides, this battered Ford had taken more punches than Kristian Laight and more kicks than an expectant mum. I suspect it wasn’t long for this world.

Built in Spain, enhanced in Wales

A rubbish Escort van isn’t the best introduction to the MS-RT Transit Connect, but it was my single point of reference as I ventured into Wales to the firm’s certified facility located in an old British Nylon Spinners factory on the outskirts of Pontypool.

This is where standard Ford Transit vans and the smaller Transit Connect arrive to allow the Welsh wizards to weave some motorport magic. The vans enter as workhorses, but leave as thoroughbreds. Or something.

The Ford Transit Connect is the latest van to go under the MS-RT knife, as the company seeks to build on the success of the hugely popular MS-RT Transit Custom. The formula is the same, but the Connect is aimed at a different clientele. Think mobile valeters, mechanics and posh couriers.

But equally, you could see the MS-RT Transit Connect jostling for position outside a surfer’s shack in Cornwall or at the foot of a mountain bike trail in the Lake District. Because lifestyle, innit. 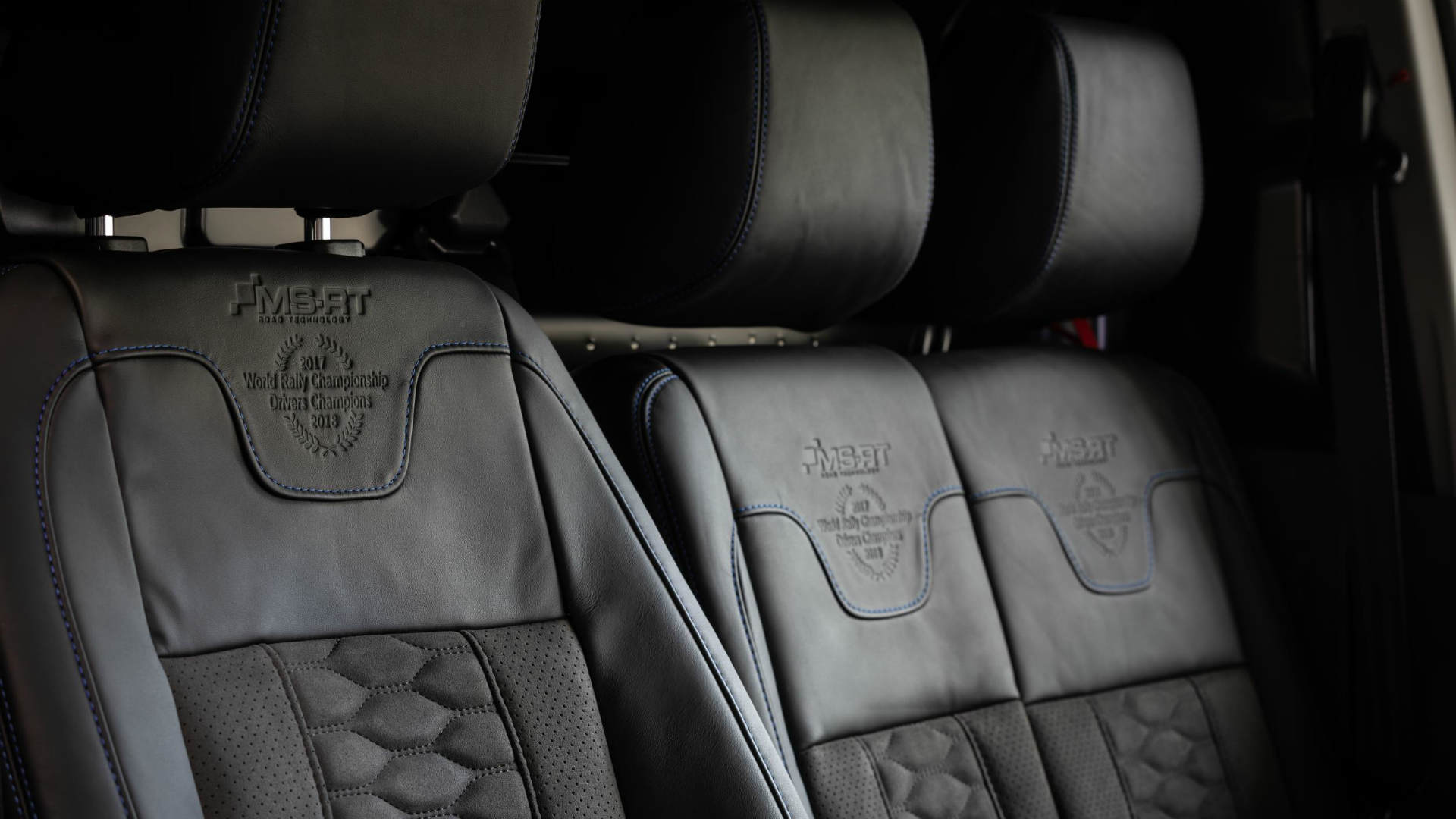 There’s an increasingly thin line between Ford’s cars and its range of light commercial vehicles. Assuming you can live with having just three seats, a Transit Connect 200 L1 – the version used for the MS-RT makeover – could make for an extremely practical and efficient daily-driver.

‘What will the neighbours think?’, might be a question you’re pondering. We can’t have the yummy mummies of Costa and dashing dads of Waitrose thinking we’ve taken up labouring for a living, dahr-ling.

Nonsense. These things are in high demand, to the extent that some chancers are producing knock-off kits and dressing them up as authentic MS-RT items. Take it from me, they’re not the real thing. It takes 75 to 78 hours for each Transit Connect to pass through the various rooms of a famous old building that once posted the largest factory floor in Europe. 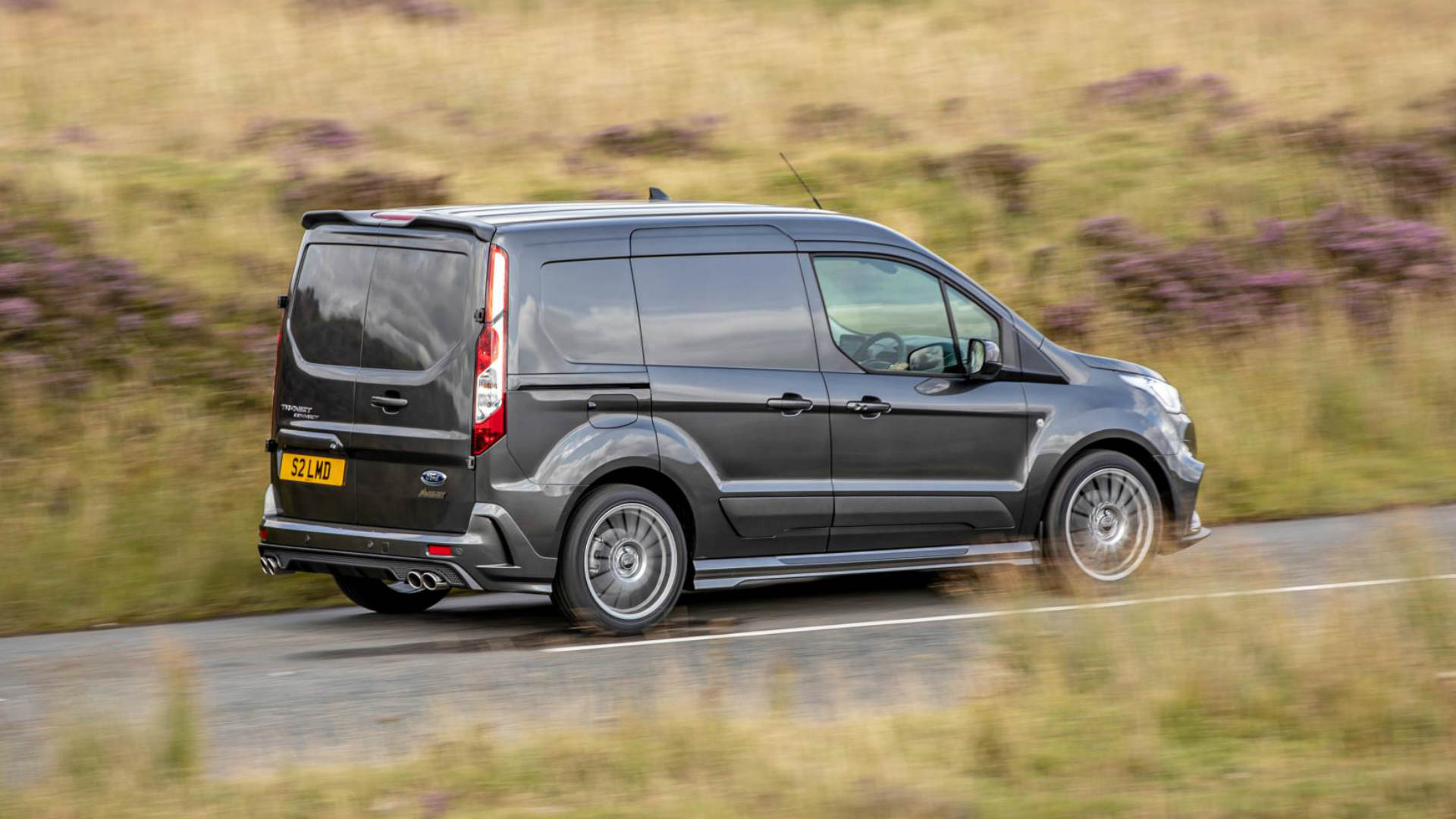 Having failed to source a reliable supplier in Eastern Europe, the guys at MS-RT took it upon themselves to pioneer the production of injected-moulded plastic used to create the exterior body styling.

The front bumper, grilles, front diffuser, side skirts, rear diffuser and spoiler are all created in-house before being hand-finished, painted and installed by a small but dedicated team. Crucially, they’re built to withstand the same level of abuse as a standard Ford van and are designed for ease of removal at a Ford dealer.

The result is something that looks fresh out of the Ford factory. It’s little wonder, then, that Ford is happy to list the MS-RT option in its brochure, while orders have to be placed via one of a select number of official Ford Transit centres.

Still unconvinced? Maybe the fact that MS-RT is the first European firm to achieve Ford Qualified Vehicle Modifier (QVM) status will change your mind. Having seen the process for myself, I can assure you these vans bear close scrutiny. It’s a proper job, as they might say in my part of the world. 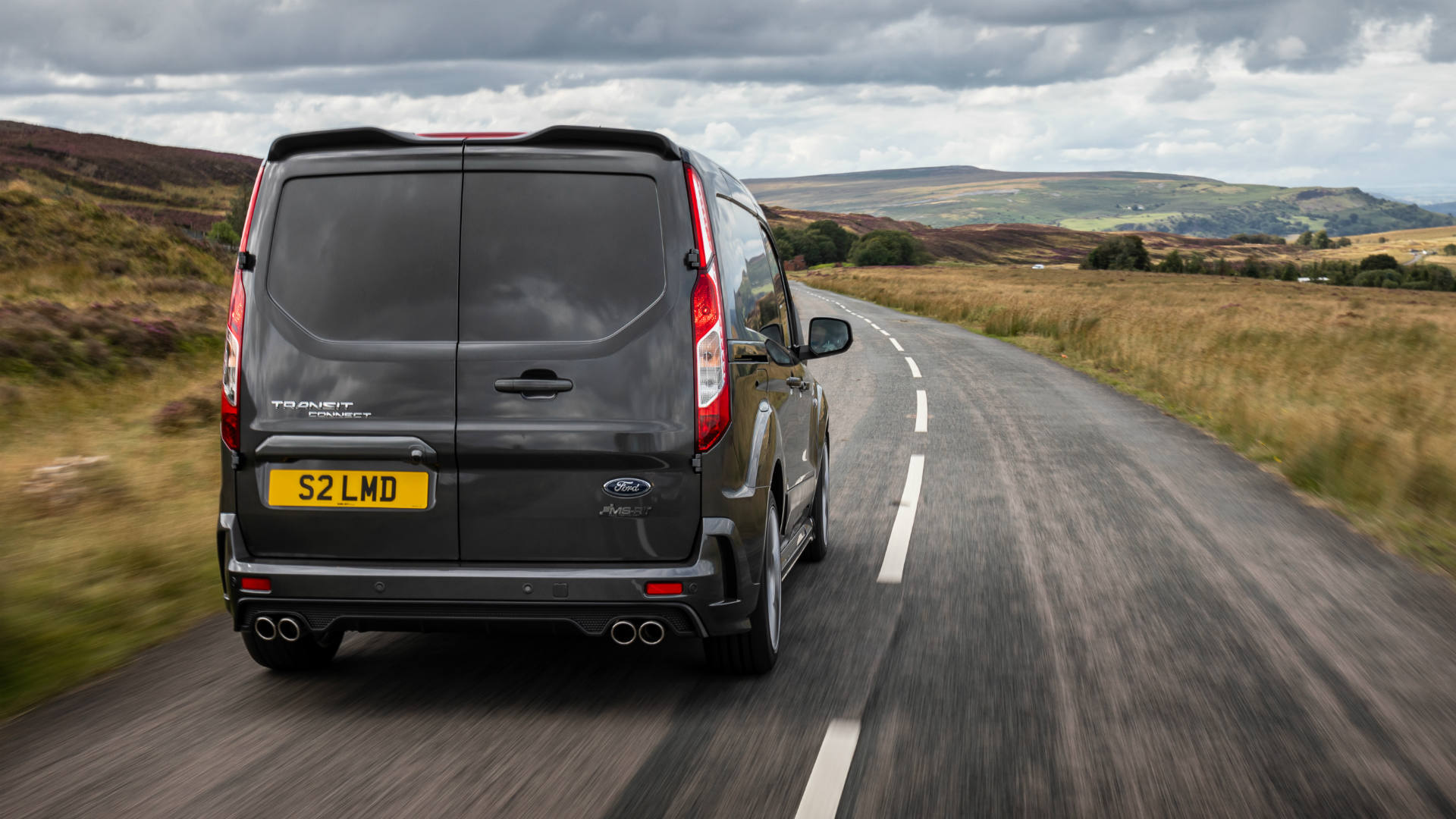 On the inside, the steering wheel is removed to be refinished, while the seats are wrapped in hand-crafted suede and nappa leather. It’s like having a Transit Connect Vignale without the concierge. Or the extravagant price tag.

It’s £23,995 plus VAT, in case you were wondering, which is around £5,000 extra on top of the standard Transit Connect Limited. Not bad, especially considering the time and money spent designing, building and installing the bespoke parts.

There aren’t many options, but you can order a Maxhaust exhaust system, black exhaust tips and a full carbon steering wheel. You can also go a bit lairy with the racing decals, if you like that kind of thing. Personally, I think less is more. 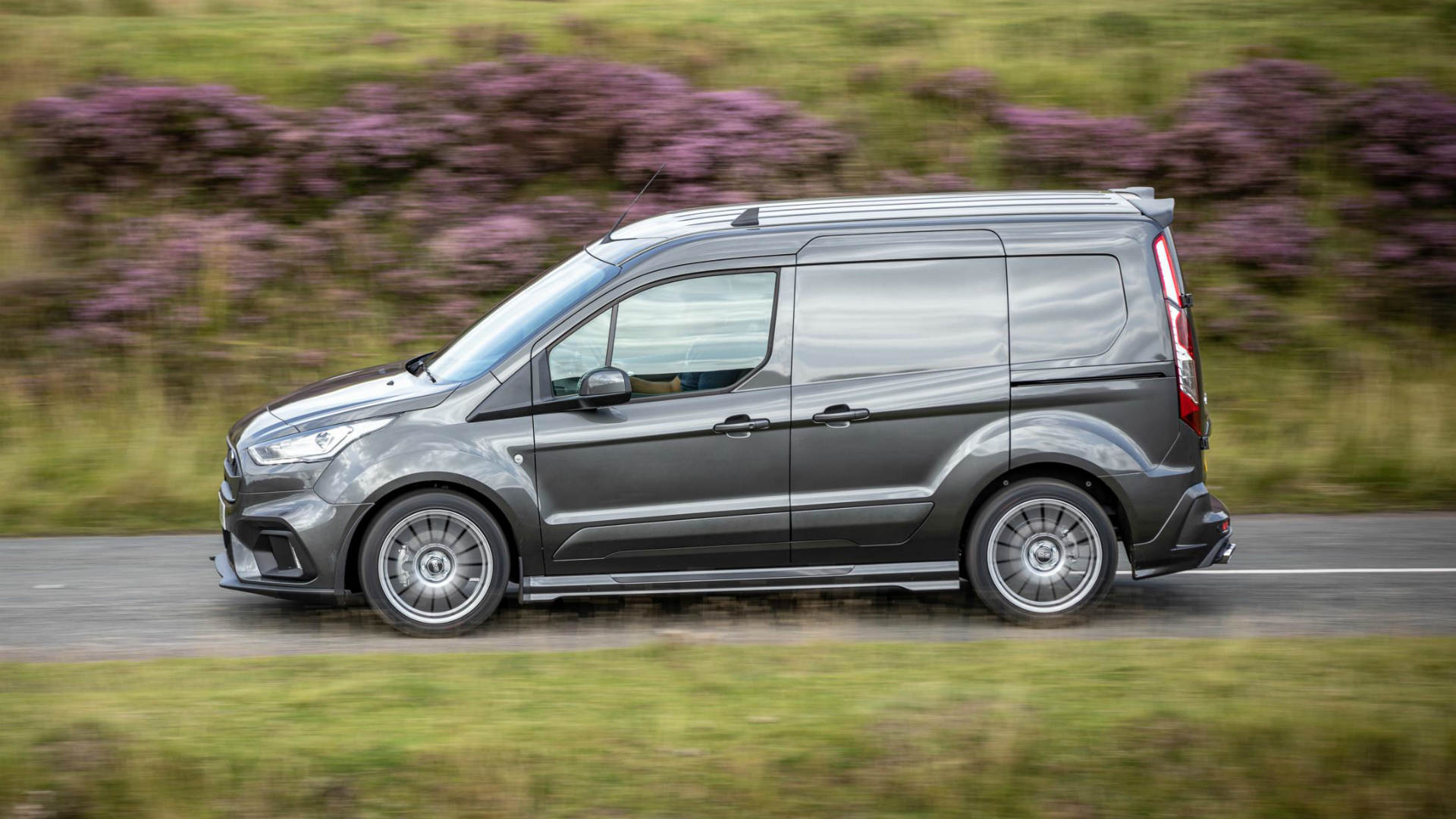 “Cor, mister, I bet that goes really fast,” might be a common question you’ll be asked as you fill up with diesel or unload your garden rubbish at the tip. It’ll top 100mph, so it’s plenty quick enough, but MS-RT hasn’t touched the engine.

Which means it’s powered by the same Euro 6.2 1.5-litre EcoBlue diesel engine producing 120hp and 199lb ft of torque. A six-speed manual comes as standard, but you can order an eight-speed automatic for a touch more torque. You can expect to achieve around 55mpg if you ain’t misbehavin’.

It all feels very car-like. Every MS-RT van is based on the Limited trim level with a few optional extras, so aside from the bulkhead behind the seat and the slightly iffy acoustics in the cabin, it feels every inch a Ford car.

The car-like vibes continue once you’re on the move, with the motorsport-enhanced Transit Connect dealing with the rutted roads of Wales with aplomb. There’s very little in the way of wind and road noise, while the six-speed gearbox is a delight to use. It’s genuinely good fun to drive.

Cooler than a crossover? 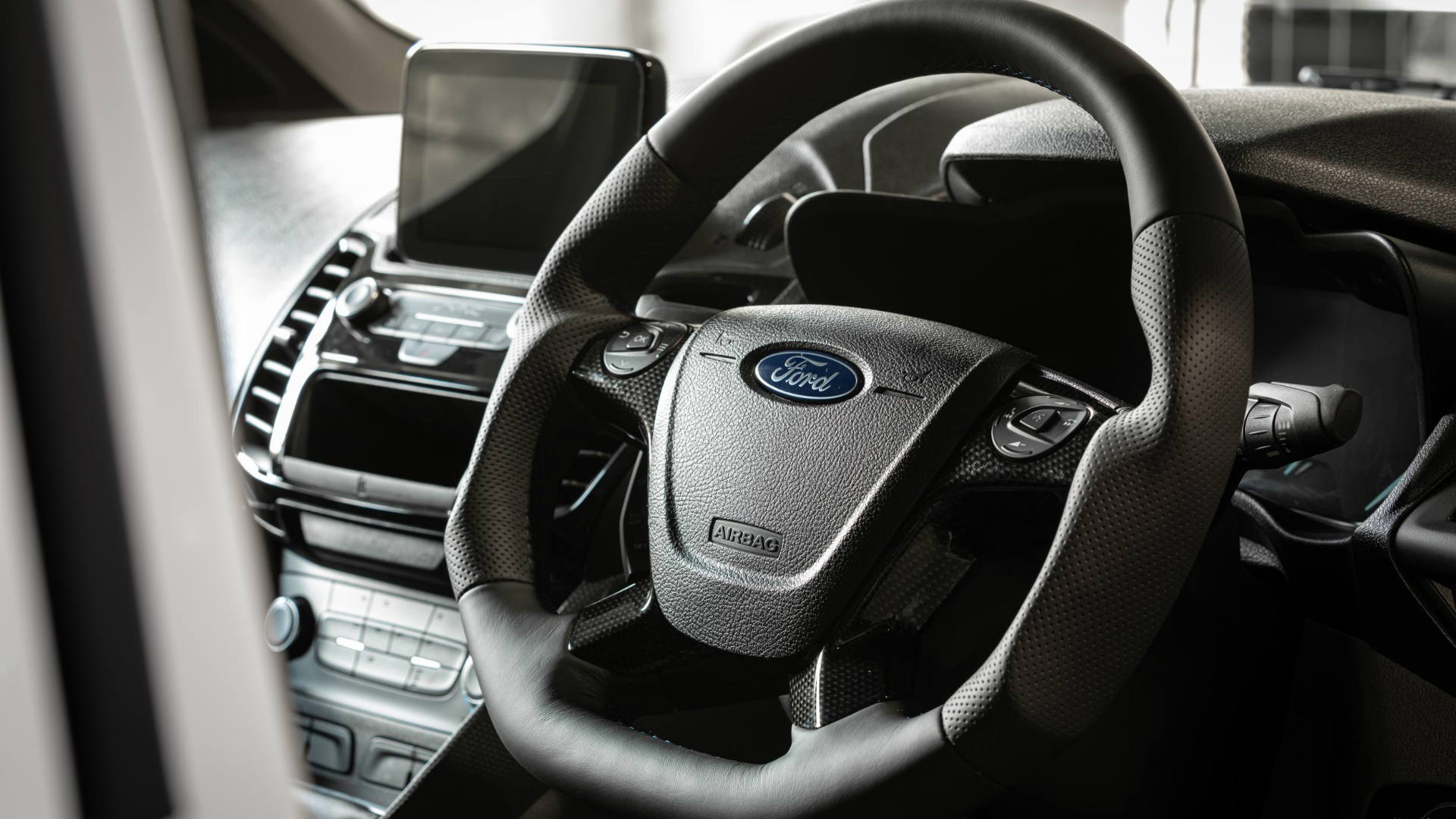 There’s something mildly amusing about pushing a bright red van to its limits on some of the best roads in Wales. Insert your own Postman Pat gag here.

I’m not saying it turns in like a Fiesta ST, but it feels like a fast Ford, and that’s high praise. The steering is nicely weighted, the gear stick is well positioned for quick changes, and the low- to mid-range torque makes overtaking a doddle.

Everything in context – this remains a diesel van with a 602kg payload and a focus on delivering stuff – but it has the potential to put a smile on your face at the end of a long working day. And that’s as much a testament to Ford’s engineers as it is to the team at MS-RT.

It feels a bit naughty, slightly unhinged and maybe a little anti-establishment. Stick two fingers up at convention and do your own thing.

Cooler than a crossover, more space than an estate car and – in my opinion – better resolved than the Transit Custom, it has banished my memories of that tired Escort once and for all. I’m not sure I’ll ever buy one, but I’ll give a knowing nod to anyone who does.