Fancy lots of flash for not much cash? Here are 20 luxury cars you can buy for a couple of grand, including the BMW 7 Series, Mercedes-Benz S-Class and Jaguar XJ.

Barges on a budget 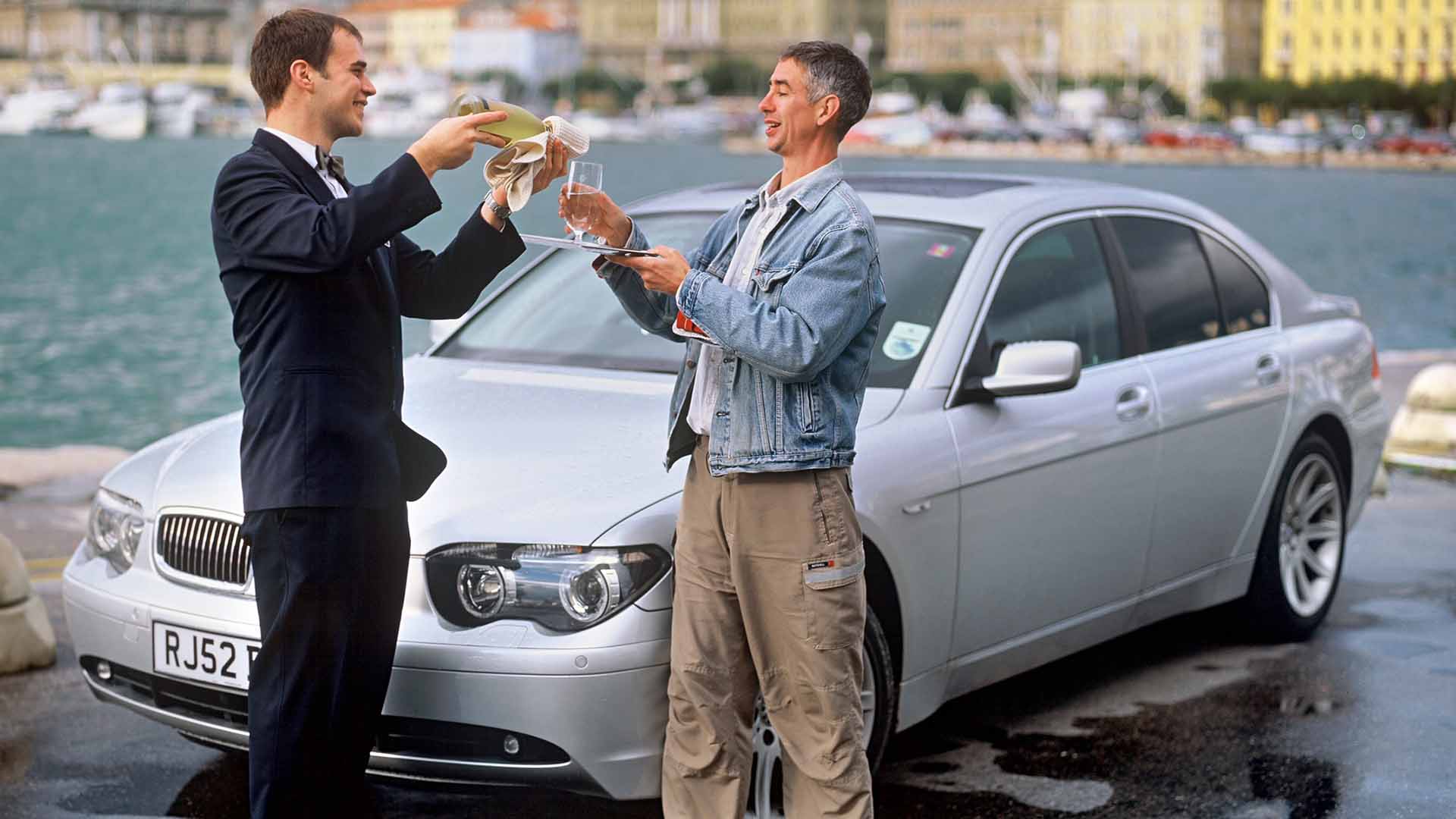 Why ‘borrow’ a new supermini on a PCP contract when you can own a slice of real luxury instead? We’ve been scouring the classifieds in search of cheap luxury cars – all of which are available for less than the deposit on a PCP deal.

If you can afford the running costs – and you see yourself as a risk-taker – these budget barges could be your ticket to luxury living. Based on what’s available on Auto Trader today, £2,000 should be enough to secure a dream machine. 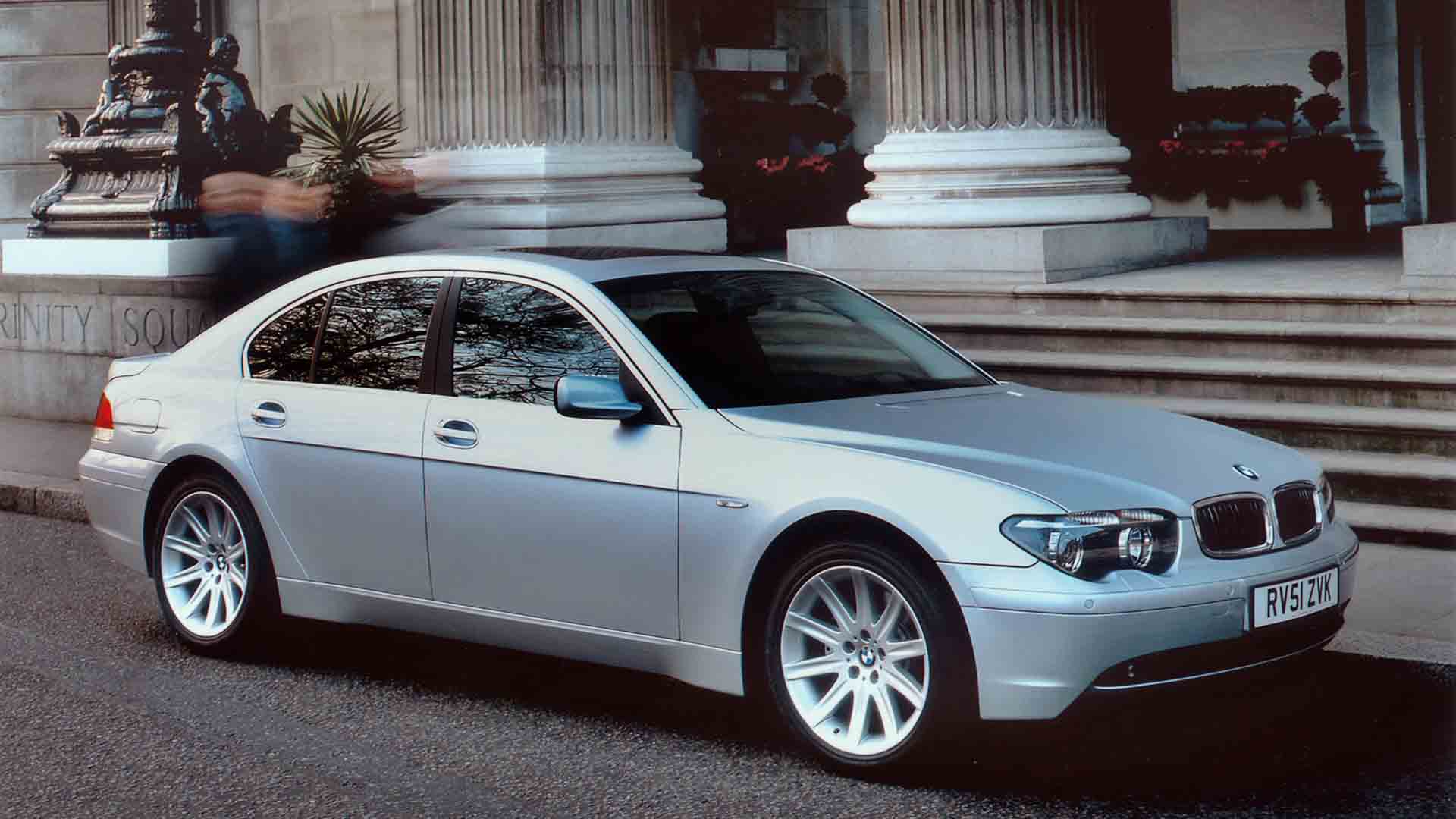 Amazingly, the ‘Bangle’ BMW 7 Series has fallen through the cracks between the worlds of classic and modern, leaving it wedged firmly in bangerdom. According to BMWBlog, this E65 model is ‘famously one of the least reliable BMWs in history’, but don’t let that put you off. The most controversial aspects are the styling and the iDrive media controller, but if you can look beyond these ‘issues’, this is one of the best-value luxury cars on the planet. Just make sure you know what you’re doing. And remember to dose up on brave pills before parting with your cash. 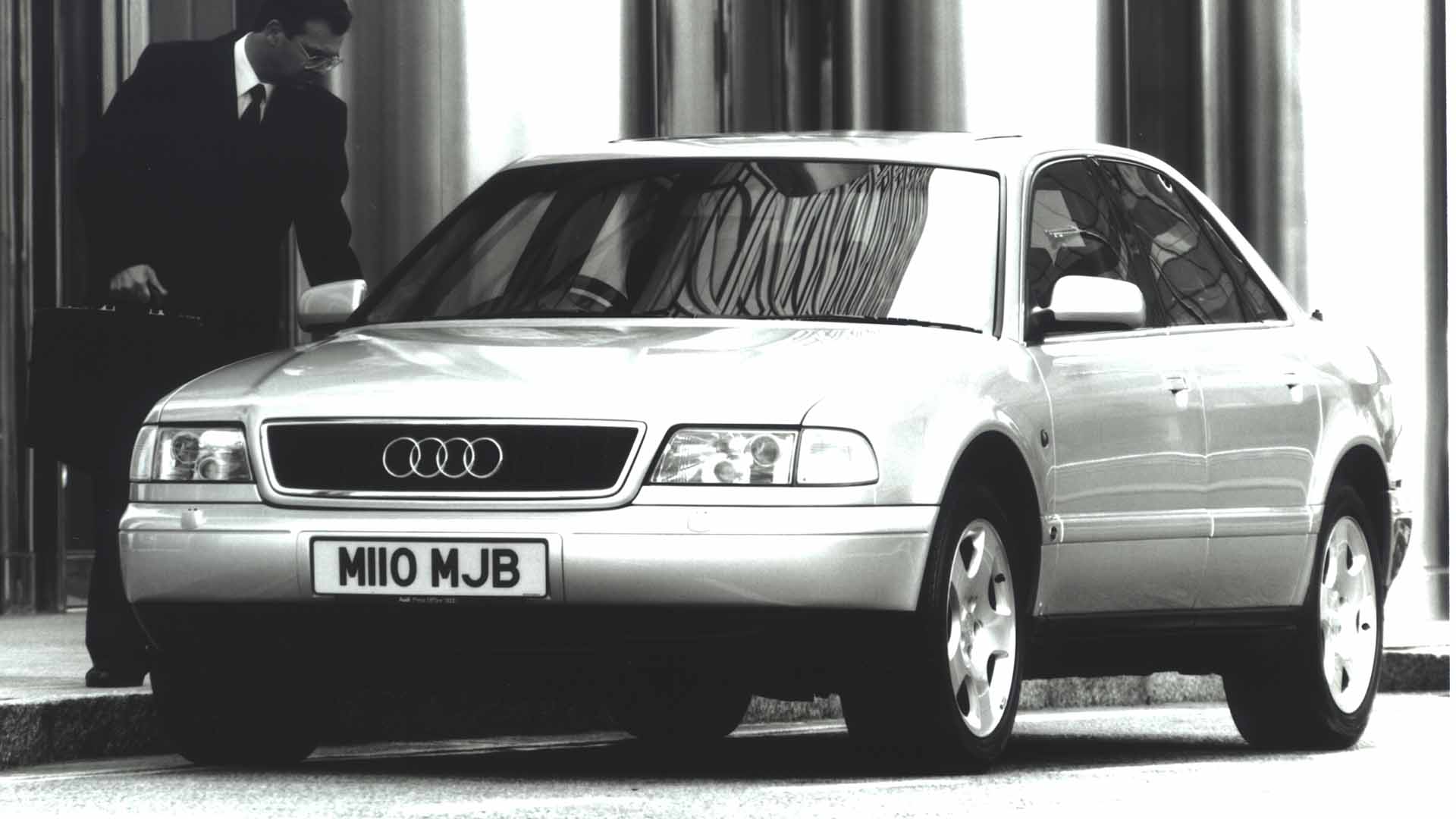 Launched in 1994, the A8 was the most luxurious Audi to date, featuring dual-zone climate control and, on some models, double-glazed and heat-reflective windows. But the most significant technical innovation was Audi Space Frame aluminium construction, which created a shell that was 140kg lighter than steel. A £2k budget won’t grant access to the best examples – put aside thoughts of owning an S8 or 6.0 W12 – but all models are spacious and built to last.

Completing the trio of German luxury models, the Mercedes-Benz S-Class is the obvious choice if you intend somebody else to do the driving. There are always around 20 examples for sale around the £2,000 mark on Auto Trader, many previously used for wedding or luxury taxi duties. Again, approach with care, but this is your chance to own what was arguably the best car on the planet. 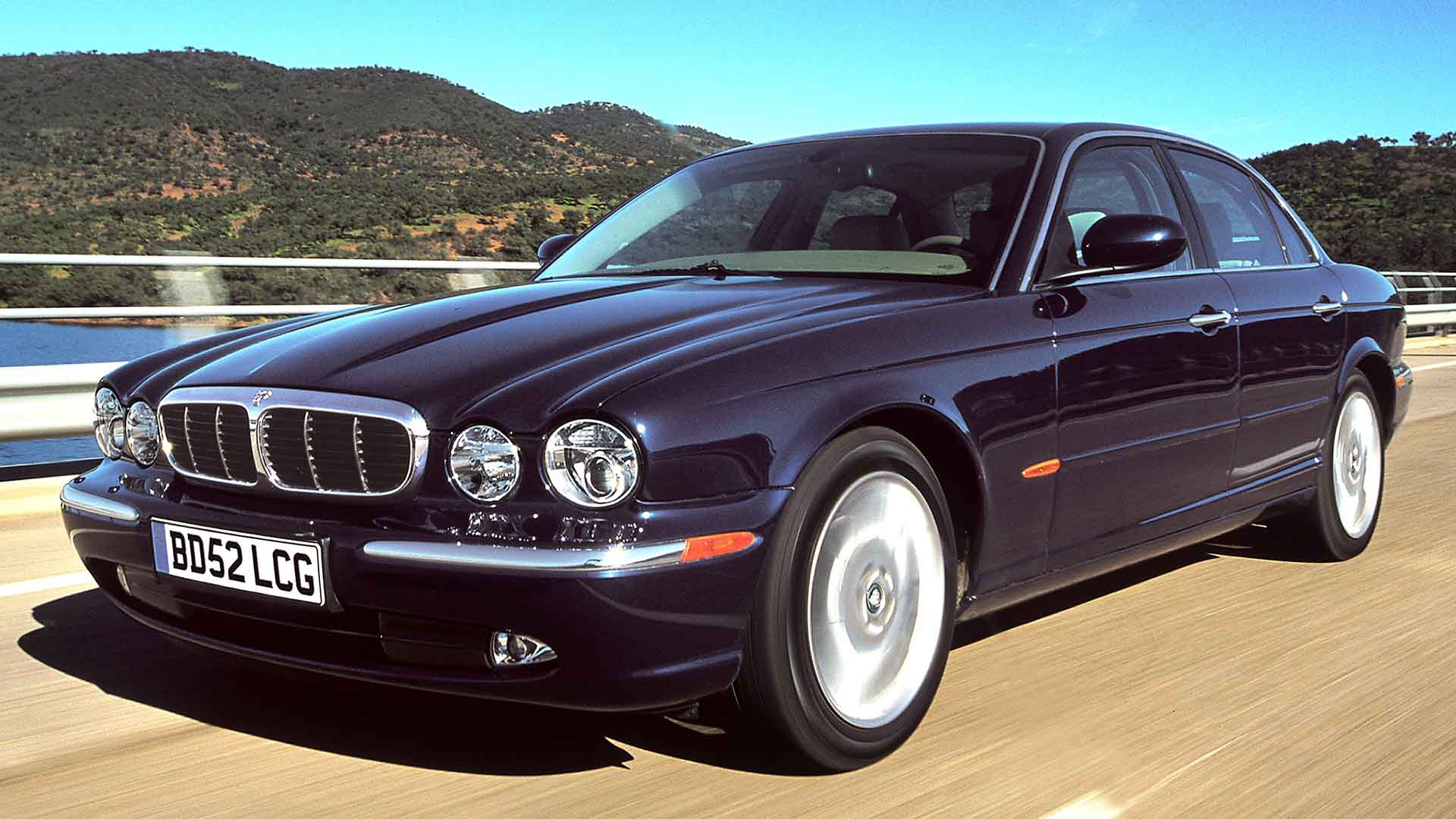 If the previous three cars were a little too German for your liking, here’s something decidedly British. A budget of £2,000 will grant you access to a 2005 X350, an early 90s XJ40 and everything in between. We’d recommend striking the middle ground with an X300 or X308, although the X350 will feel more modern. 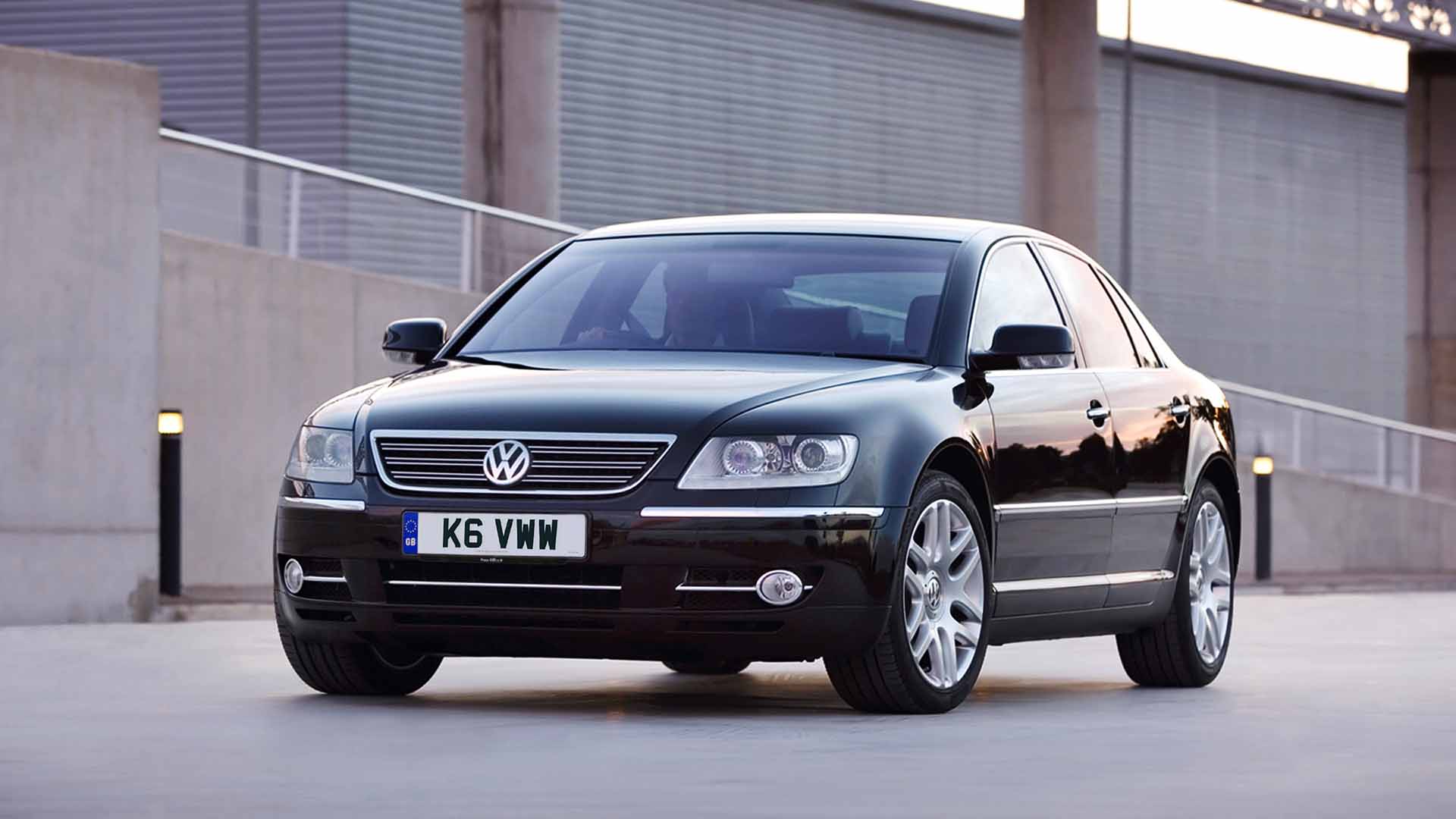 It’s amazing to think that the Volkswagen Phaeton has crept below the £2,000 mark. Admittedly, your options are limited at this price – £3,000 is a more realistic budget – but the VW is a worthy alternative to the Audi A8. Launched in 2003 with a choice of 3.2-litre V6 or 6.0-litre W12 petrol engines, the Phaeton suffered from catastrophic depreciation. Without the ‘right’ badge, buyers weren’t prepared to stomach the high running costs, even though the quality was first-rate. It’s worth noting the very best examples command a price tag of £15,000. Still want that new Ford Fiesta? 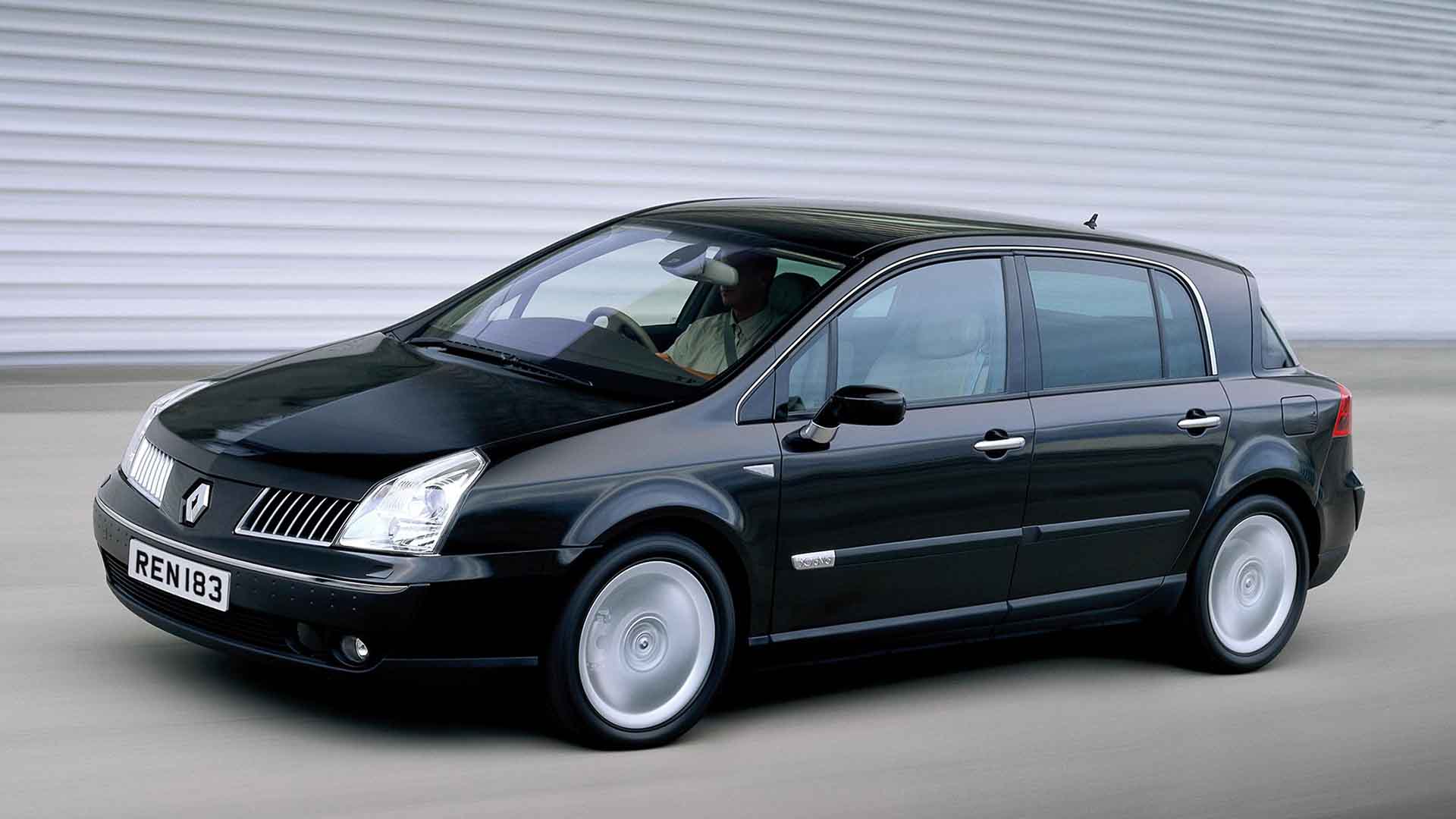 Renault spent a reported £550m on developing the Vel Satis, making it one of the most expensive cars it ever made. With the benefit of hindsight, it wasn’t money well spent, because the model was a sales flop, especially outside its domestic market. It arrived in 2002 during Renault’s bonkers period – remember the Avantime? – and was designed to combine the qualities of a saloon with the spaciousness of an MPV. Stick a pair of tricolour flags on the front, hire a couple of motorcycle outriders, and you’ll do a passable impression of a French president on your way to Morrisons. 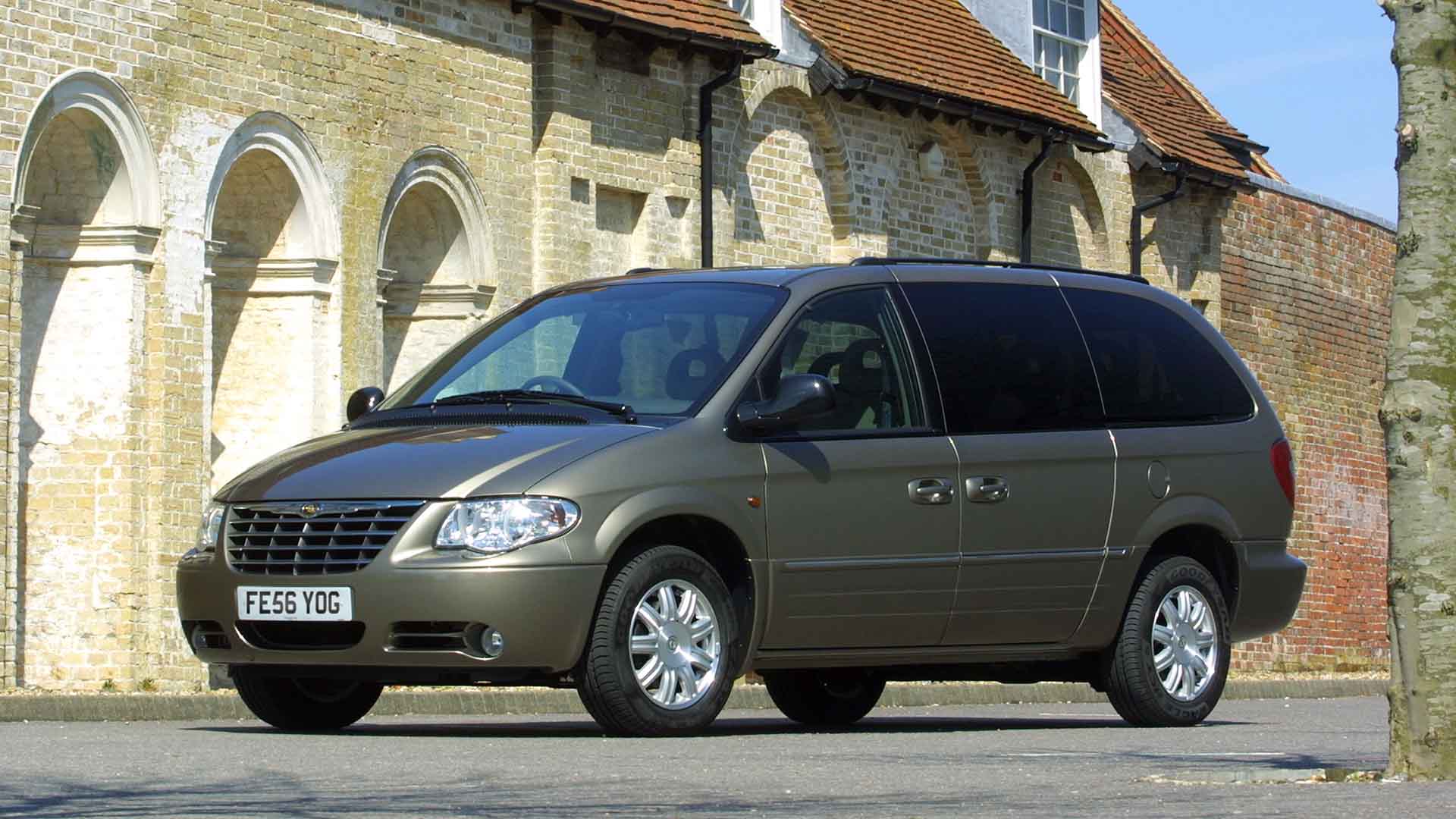 Fancy a luxury people carrier for £2,000? Your options are limited, but you might want to consider the Chrysler Grand Voyager. While the majority of MPVs of this vintage are showing their age, the big Chrysler manages to retain some class and sophistication. All versions were well-equipped, but some electrical issues are pricey to fix. Check EVERYTHING works before parting with your cash. Don’t worry about a bit of wear and tear, but do spend time finding a cherished example with a folder full of receipts. Prices start from £500, but we’d recommend spending much, much more. 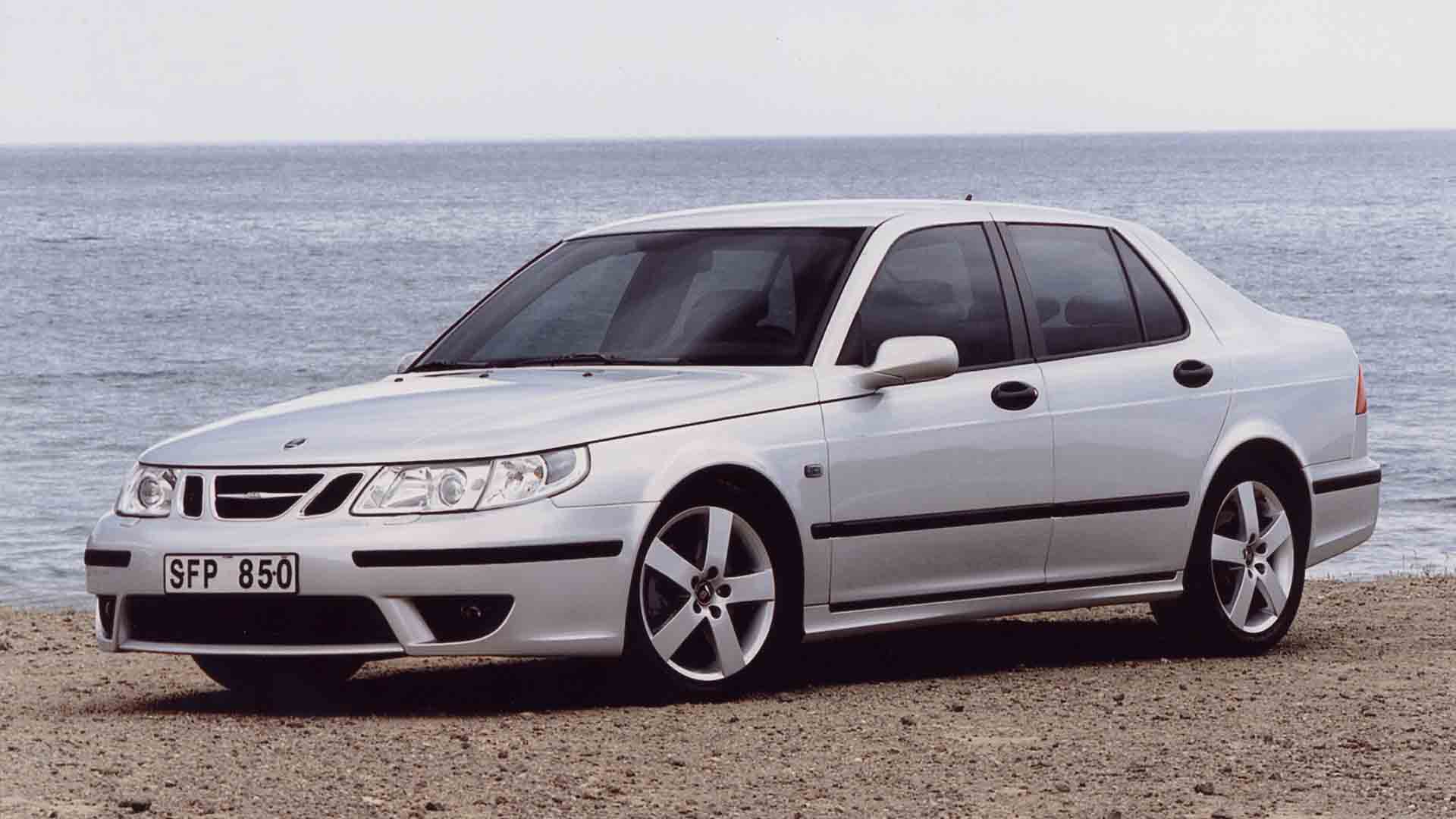 Although it’s more a rival to the BMW 5 Series and Audi A6 than the 7 Series or A8, the Saab 9-5 feels rather upmarket, especially in Griffin or Aero guises. Launched in 1997, the 9-5 was a replacement for the 9000 and was initially available as a four-door saloon (an estate followed later). Comfort, safety and refinement are three 9-5 strengths, with prices starting from just £500. Even the ‘Dame Edna’ third-generation cars are available for less than a grand. 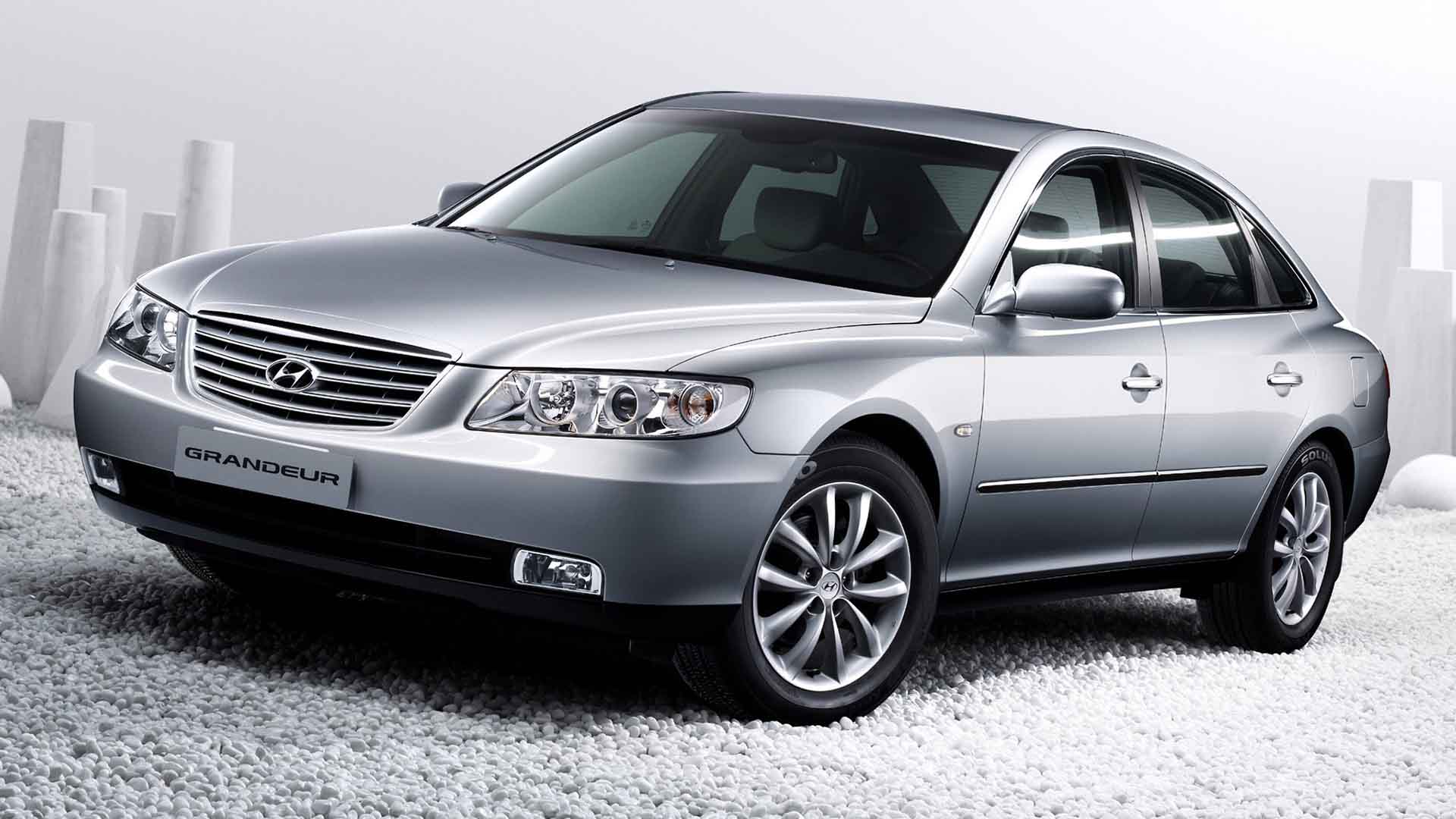 Once upon a time, the Hyundai Grandeur was one of the fastest depreciating cars in the country. Back in 2006, a Grandeur would have cost £27,000, which is around £40,000 in today’s money. For some extra context, the next most expensive Hyundai was a £19,000 Tucson 2.7 V6. Today, the Grandeur offers a 3.3-litre V6 and more toys than Hamleys. And because it’s a Hyundai, there’s a good chance everything will still work. 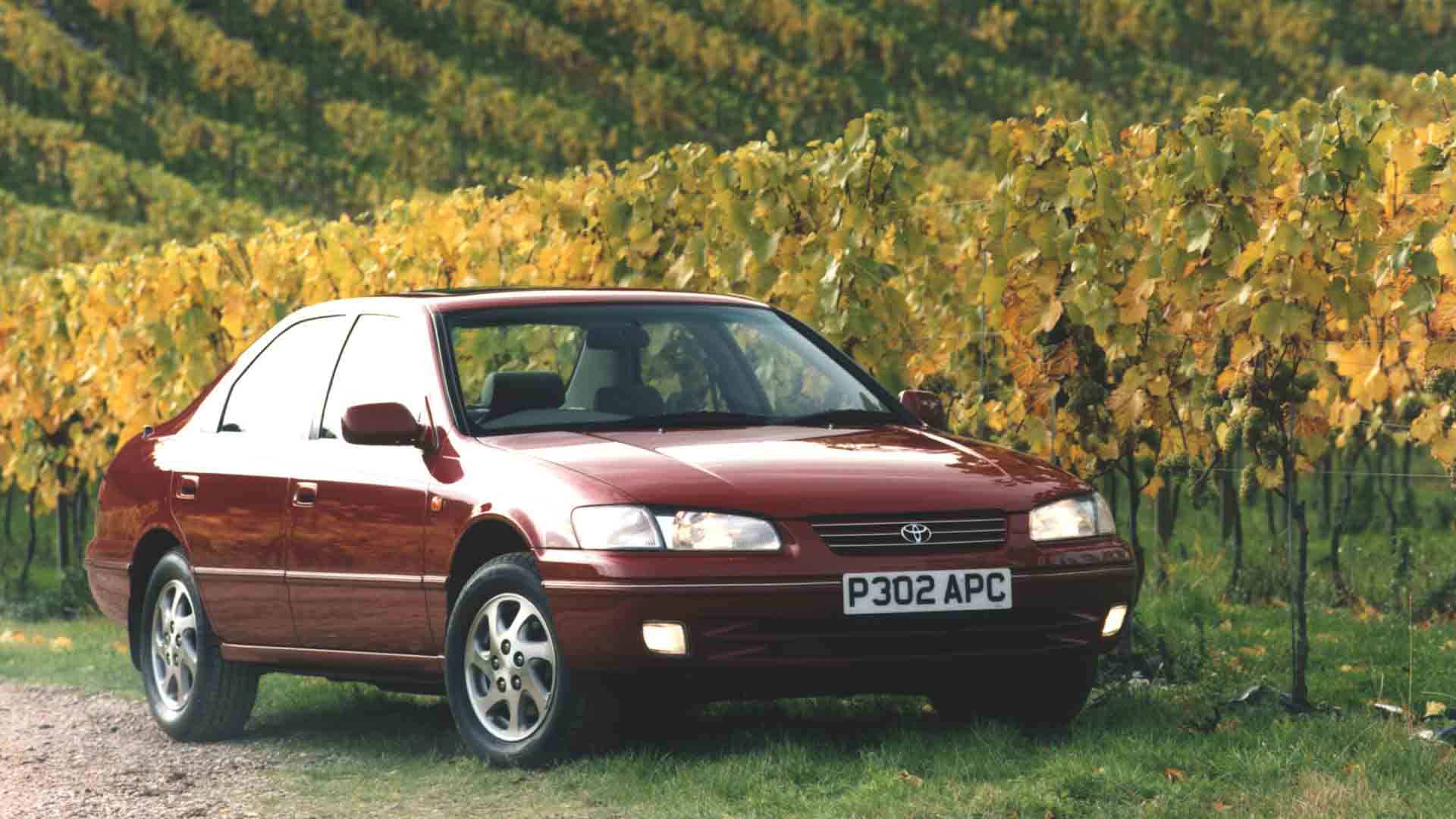 The Camry was Toyota’s flagship saloon. Not that anyone noticed. Although buyers in North America and Australia loved the build quality, ride comfort and creamy V6 engine, those in the UK preferred to arrive at the golf course in something German. Or a Jaguar. If you’re not convinced, maybe the fact that the XV20 Camry was sold as the Lexus ES in its domestic market will change your mind. 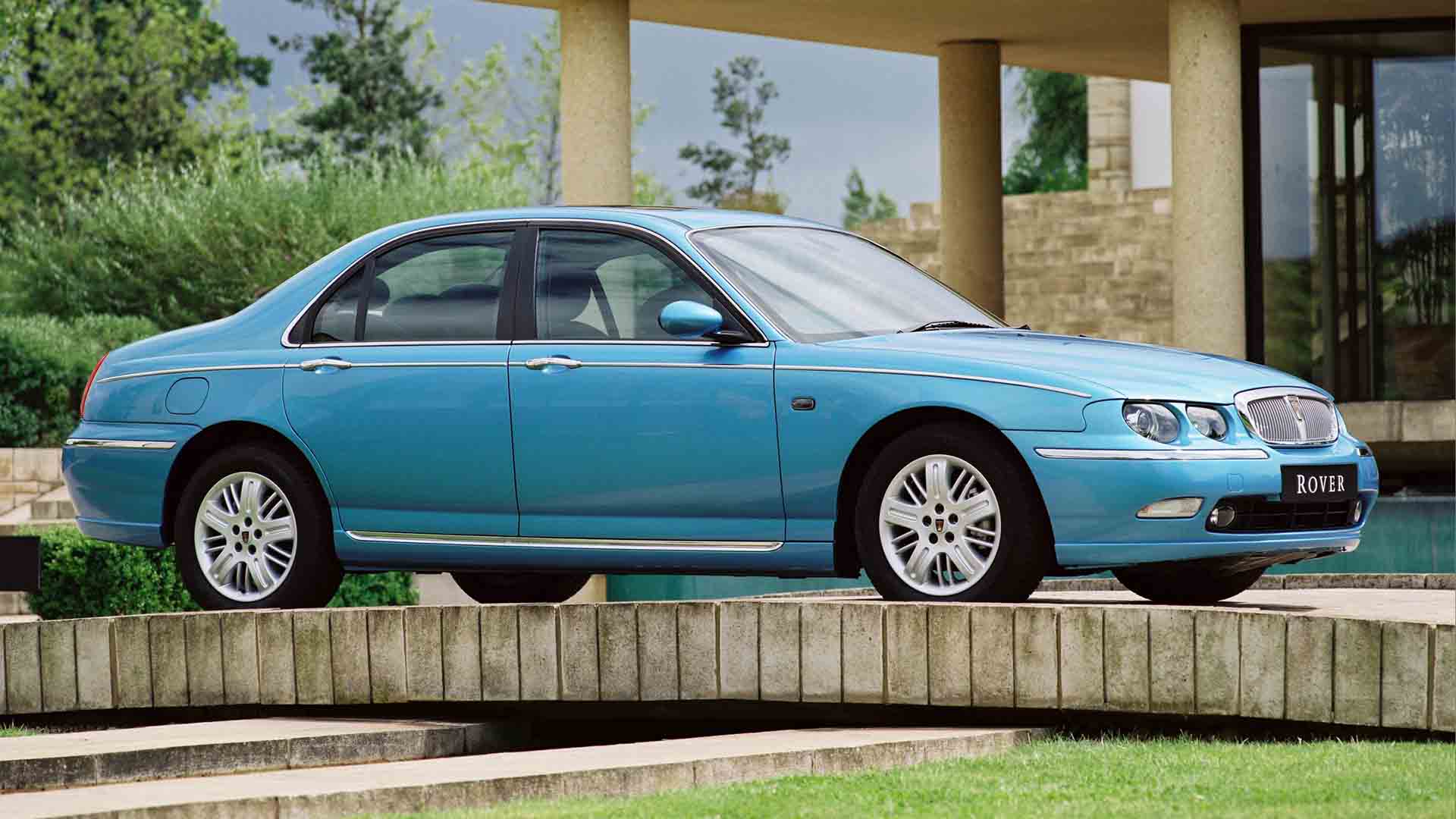 A budget of £2,000 should be enough to secure one of the best Rover 75s in the country. For that, you’ll enjoy timeless styling, excellent build quality and a dashboard design that’s both charming and elegant. Right now, there are around 50 available on Auto Trader, the majority for less than £2k. We’ve spent far too long looking at these, so it’s time to move on… 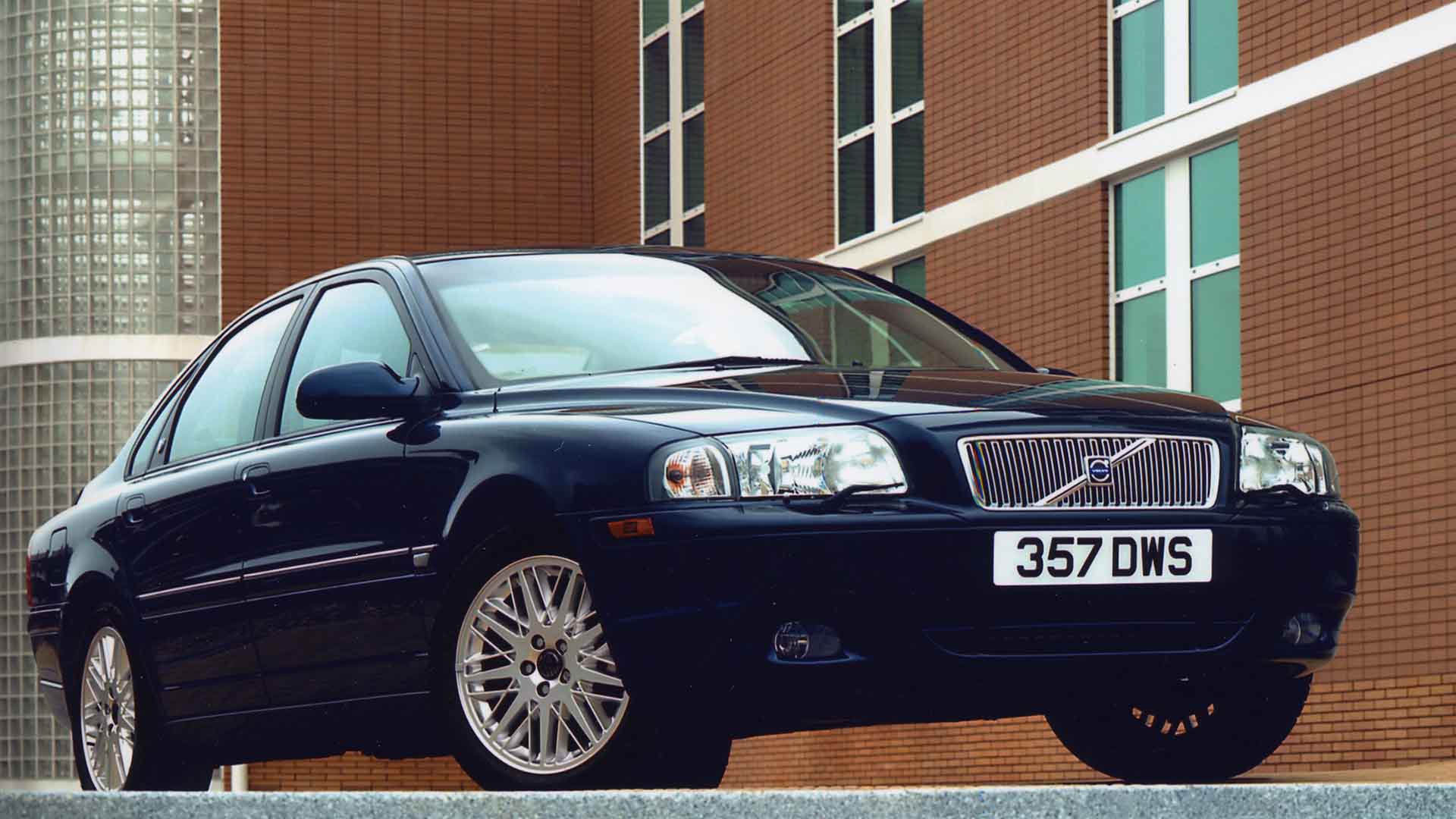 Like many on this list, the Volvo S80 was a depreciation disaster. Not that this matters to you, because most of these cars are at the bottom of the depreciation curve. All you have to worry about are the running costs and things going wrong. For long-distance commuting, few cars are as good as the S80. You’ll appreciate the smooth ride, comfortable seats, array of toys and overriding sense of safety. See if you can find an S80 with the 4.4-litre V8 engine. 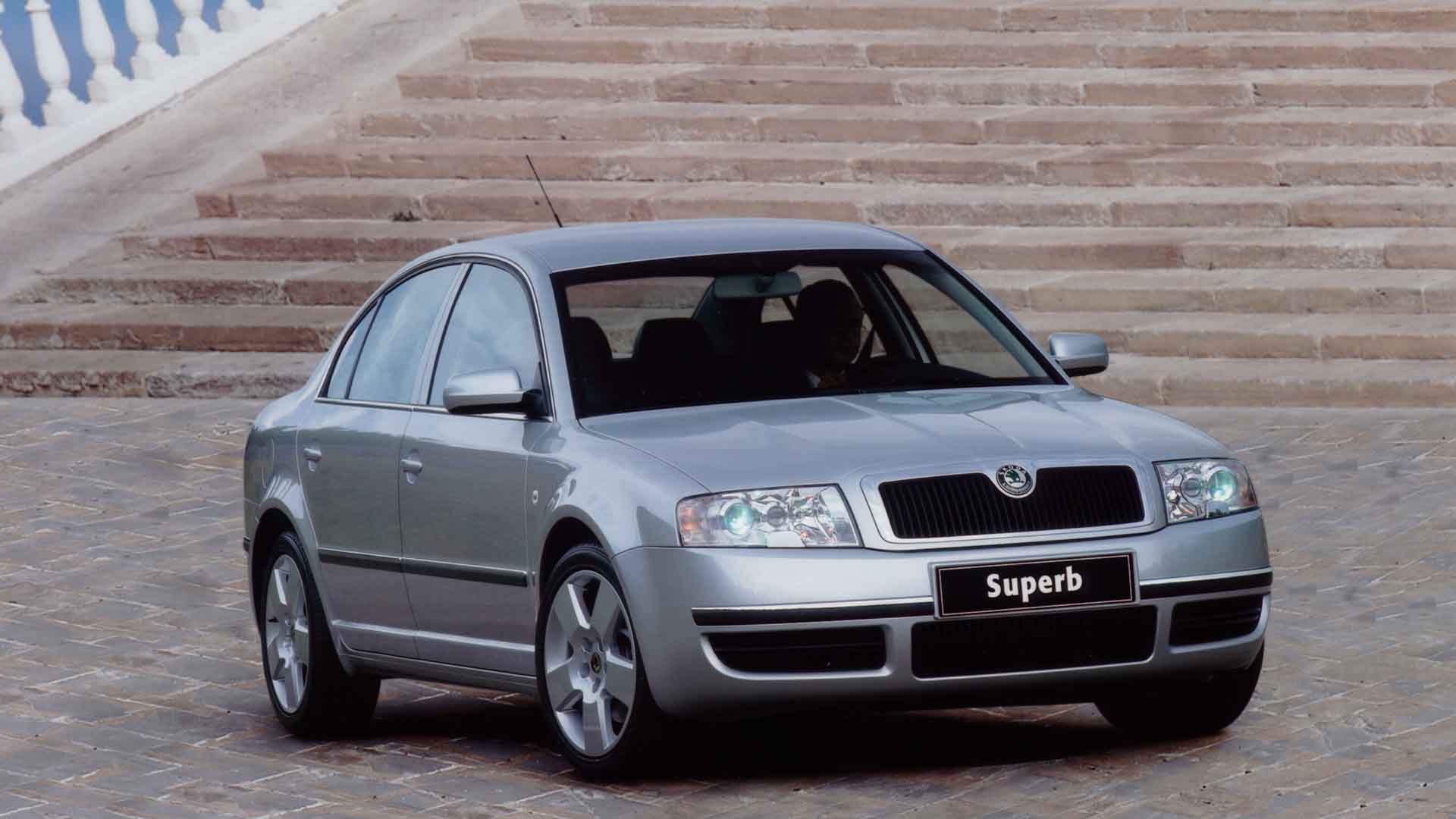 The original Skoda Superb was essentially a stretched Volkswagen Passat. It soon became the choice of the nation’s private hire operators, with cabbies growing to appreciate the proven Volkswagen mechanicals, ride comfort and huge amount of rear legroom. Today, prices start from £500, but beware of tired taxis. The Superb tended to be driven by mature owners, so it shouldn’t be too difficult to find a nice example. 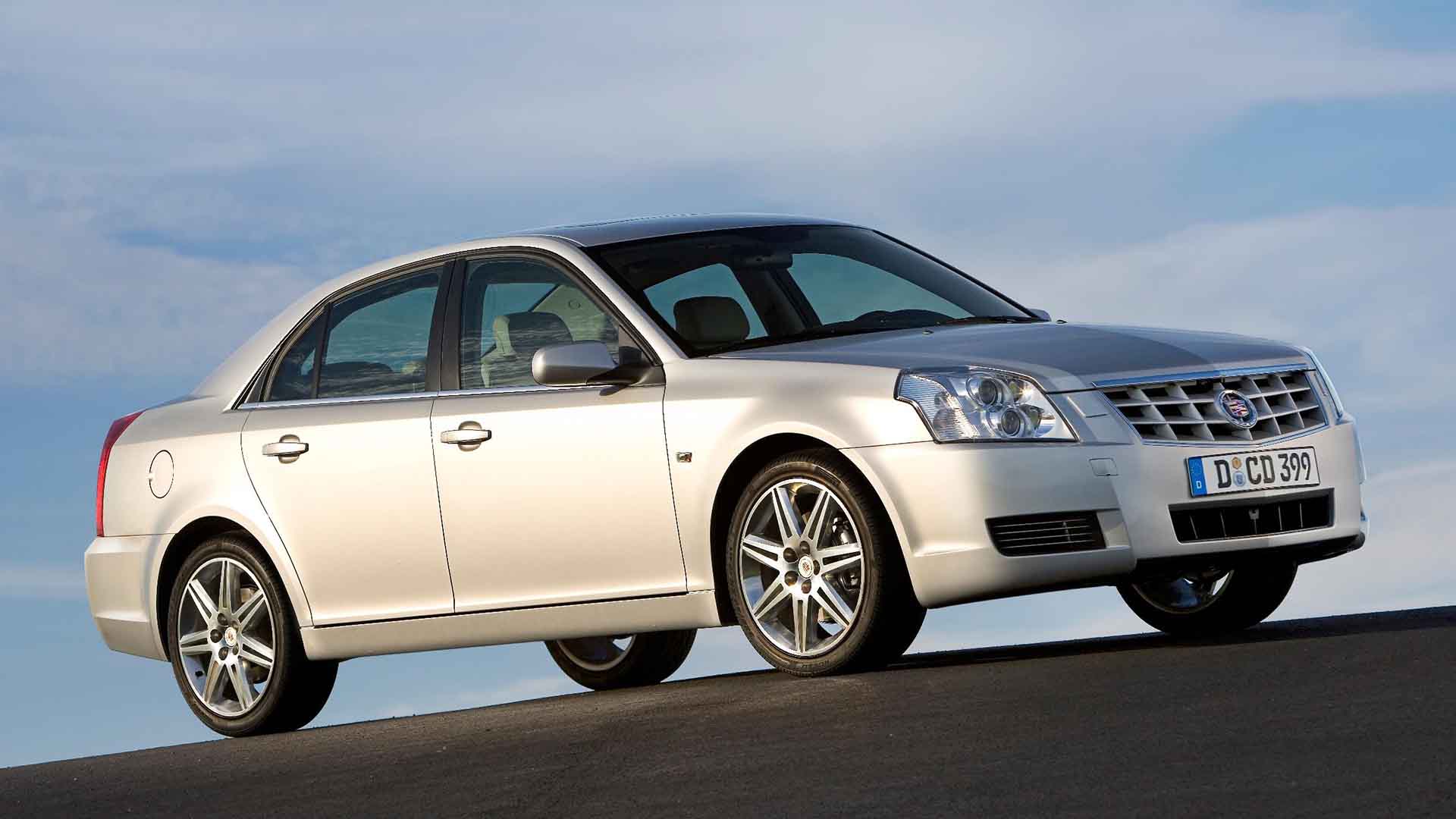 The BLS is a very European Cadillac. It was designed and manufactured by Saab in Sweden, and was essentially an Americanised version of the 9-3. It was a tough sell, with UK buyers preferring the likes of the Audi A4 and BMW 3 Series. Today, your biggest challenge will be finding one, but we think the ‘Caddy’ badge will look good on your driveway. 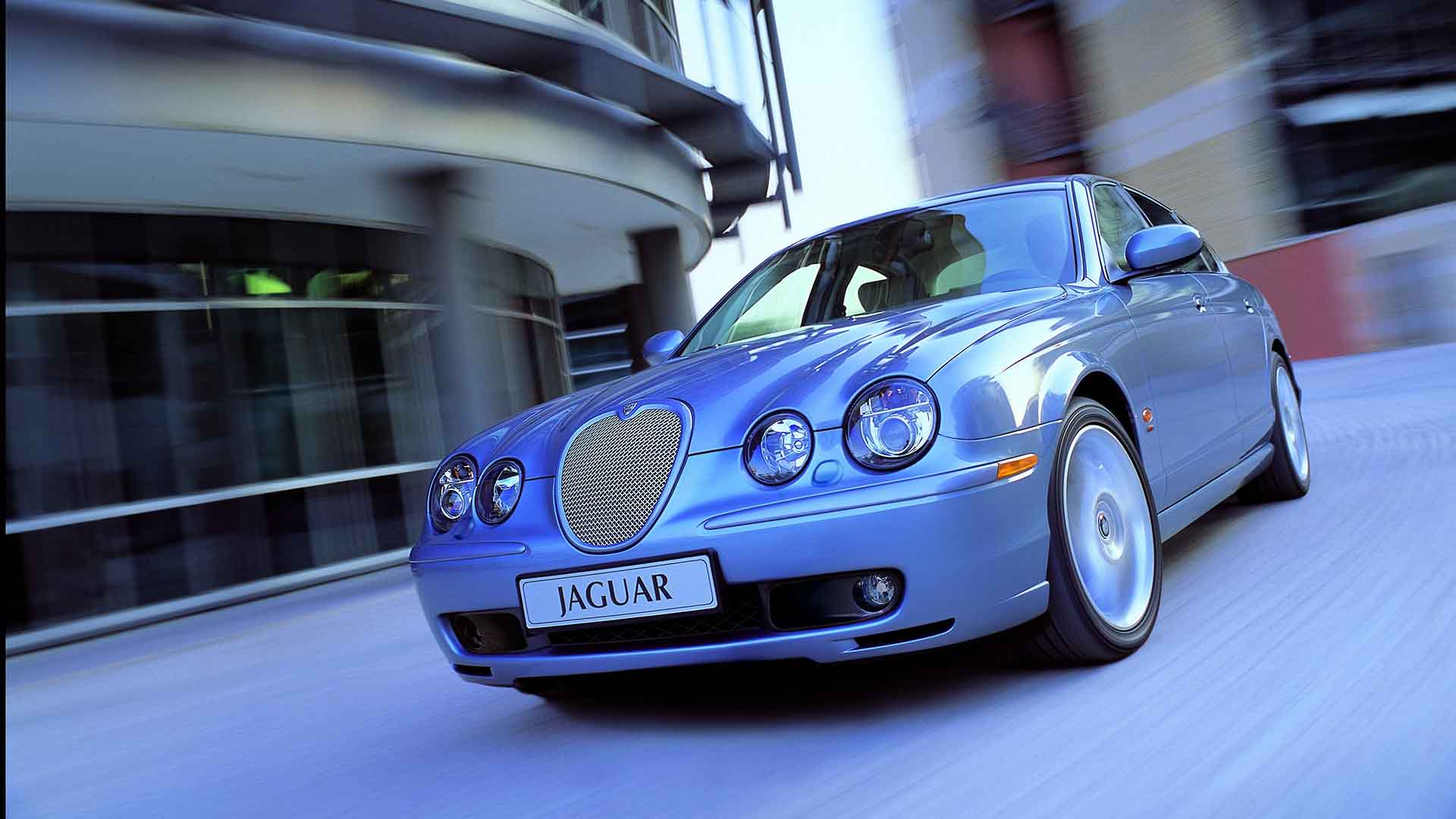 When it was new, the Jaguar S-Type was criticised for its retro styling, but that doesn’t seem to matter in 2020. It’s certainly more interesting than many of its contemporary rivals. The V8 offers heaps of torque and a soundtrack to match, but don’t discount any of the other engines, especially if you’re on a tight budget. Buy one from an enthusiast to minimise the risks – there are plenty of cherished examples out there. 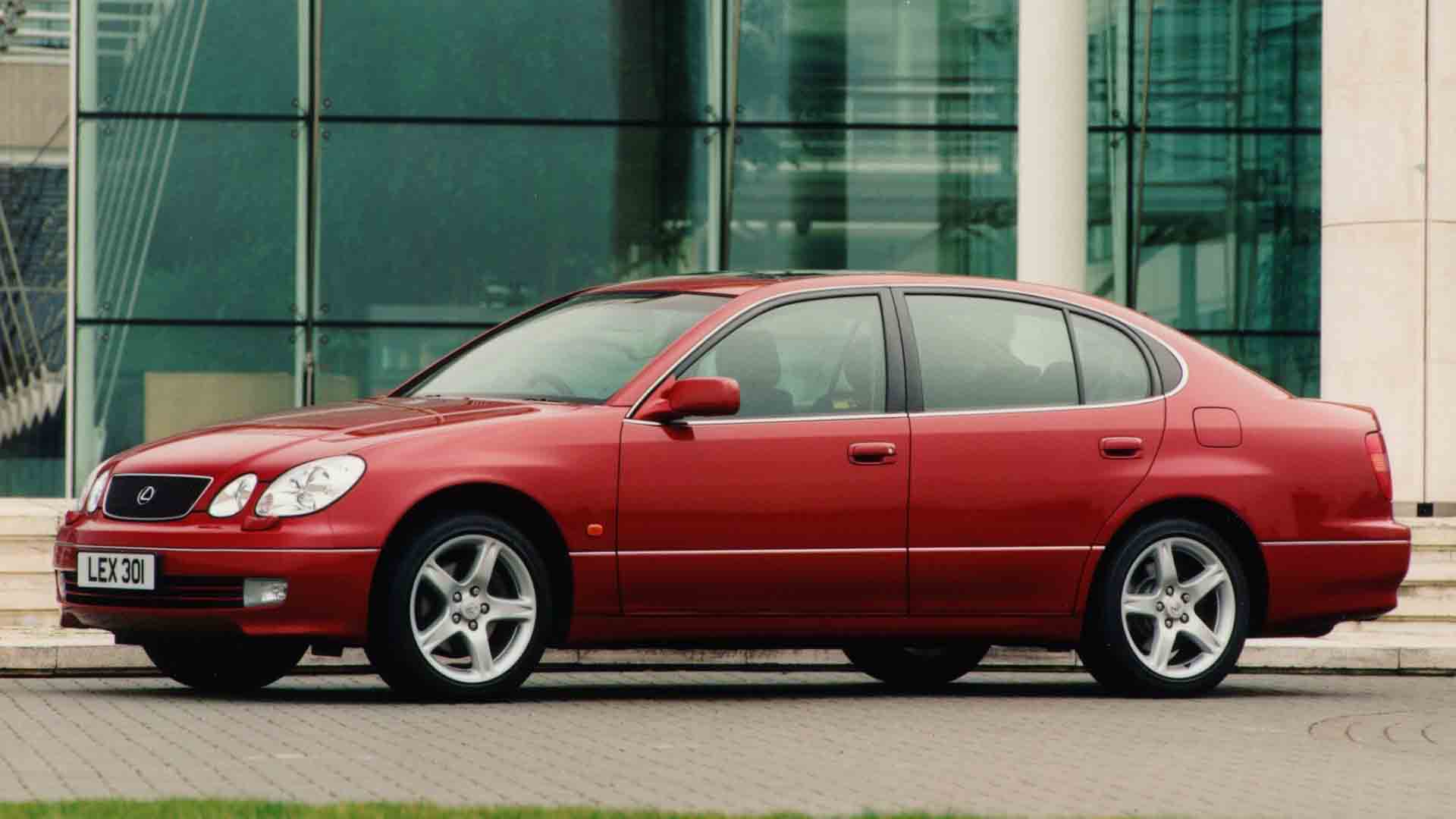 Cards on the table: we’d prefer the full-fat LS 400, but the Lexus GS 300 is a pretty good compromise. If nothing else, the second-generation GS has certainly aged well, managing to retain more class than a contemporary German barge. These cars were purchased by careful and considerate owners, but there’s a risk that corners have been cut at this end of the market. Get a good one and it’ll still feel fresh today. 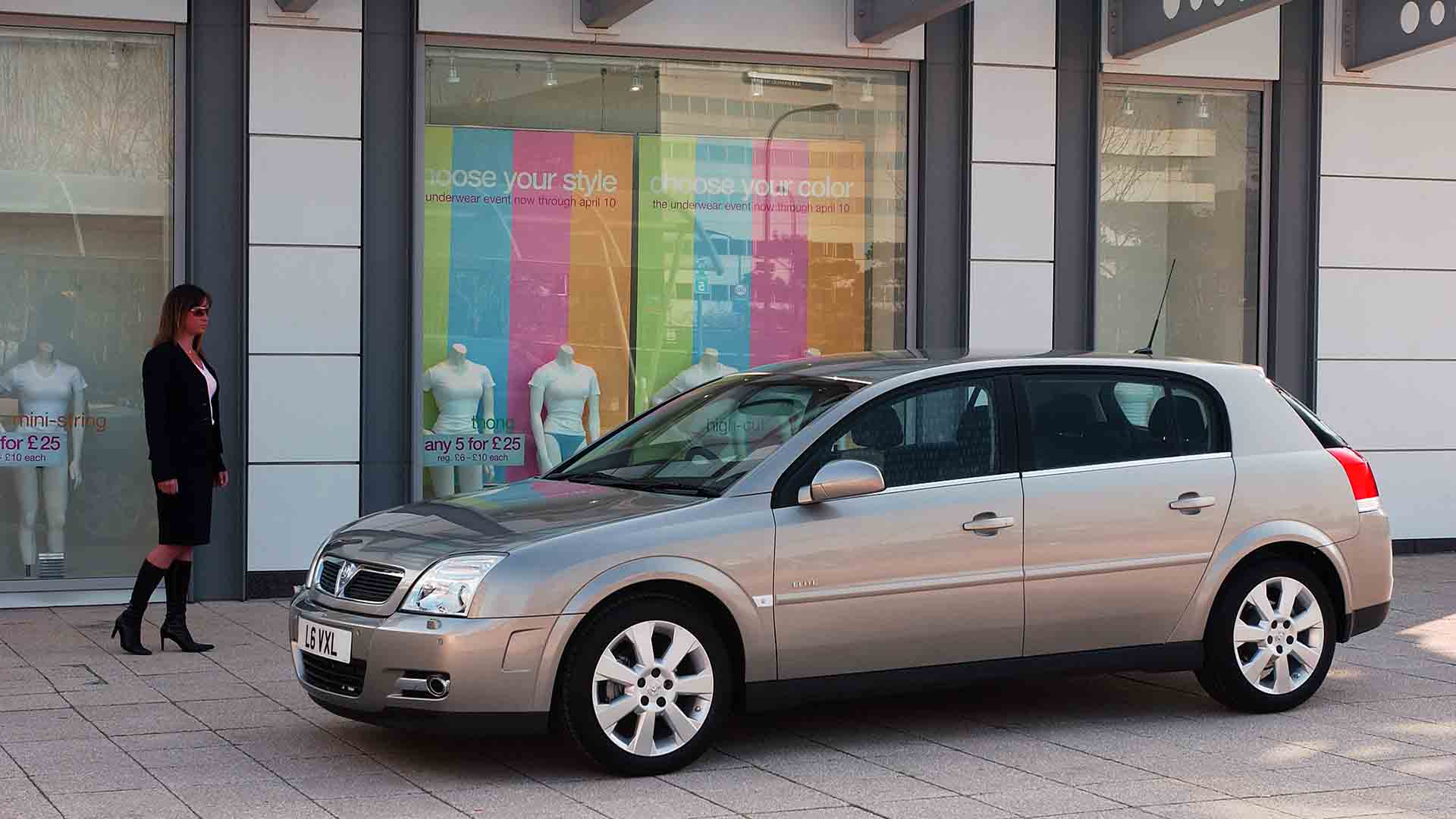 This one is going to be a hard sell, but we’ll give it a go. The Vauxhall Signum was designed with rear-seat passengers in mind, so if… oh, who are we trying to kid? You’re not buying a Signum, are you? 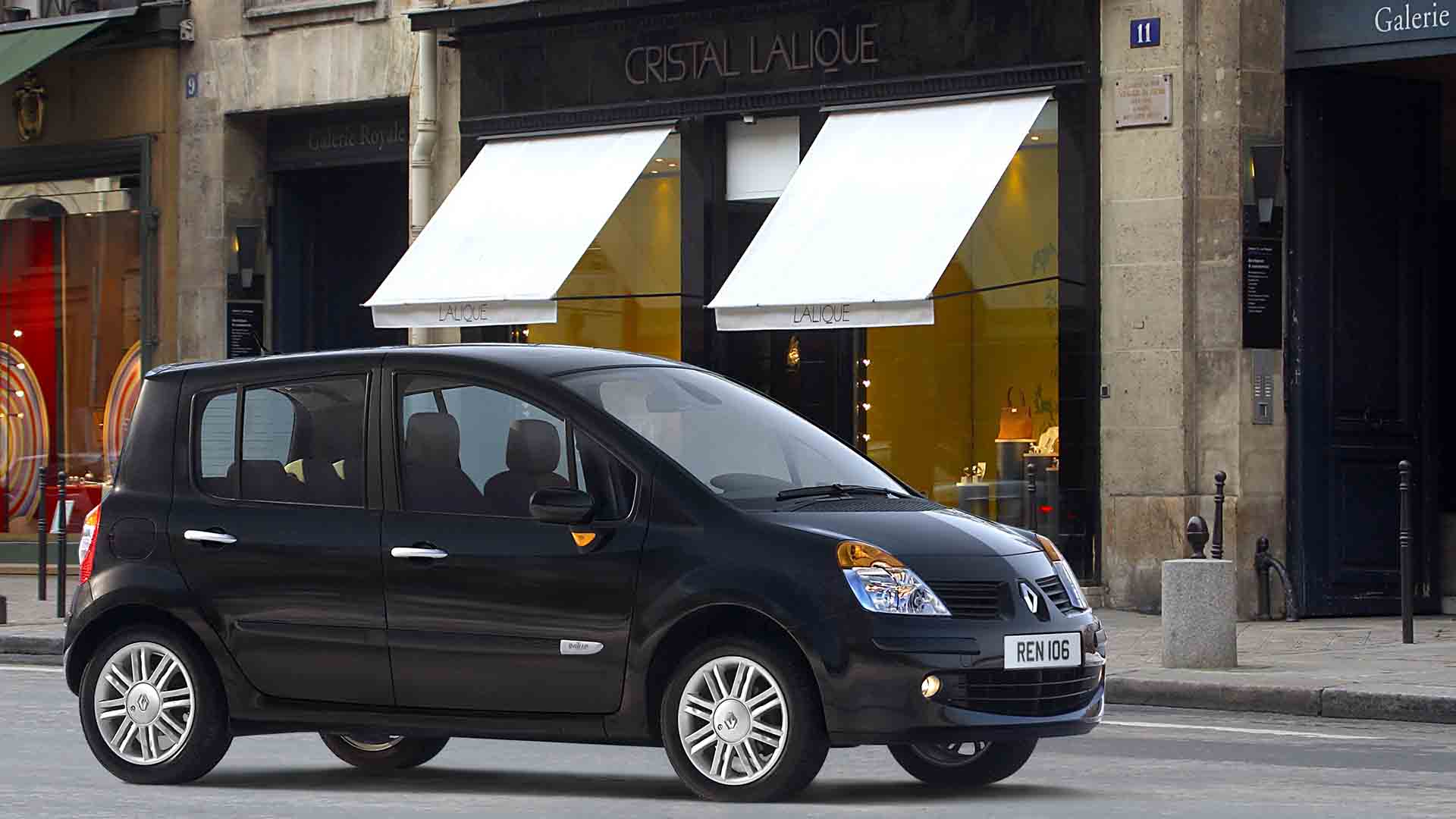 Nobody does small luxury cars like the French, which is why we’re serving up the Renault Modus Initiale. No, you’re not buying this one either, are you? OK, moving on… 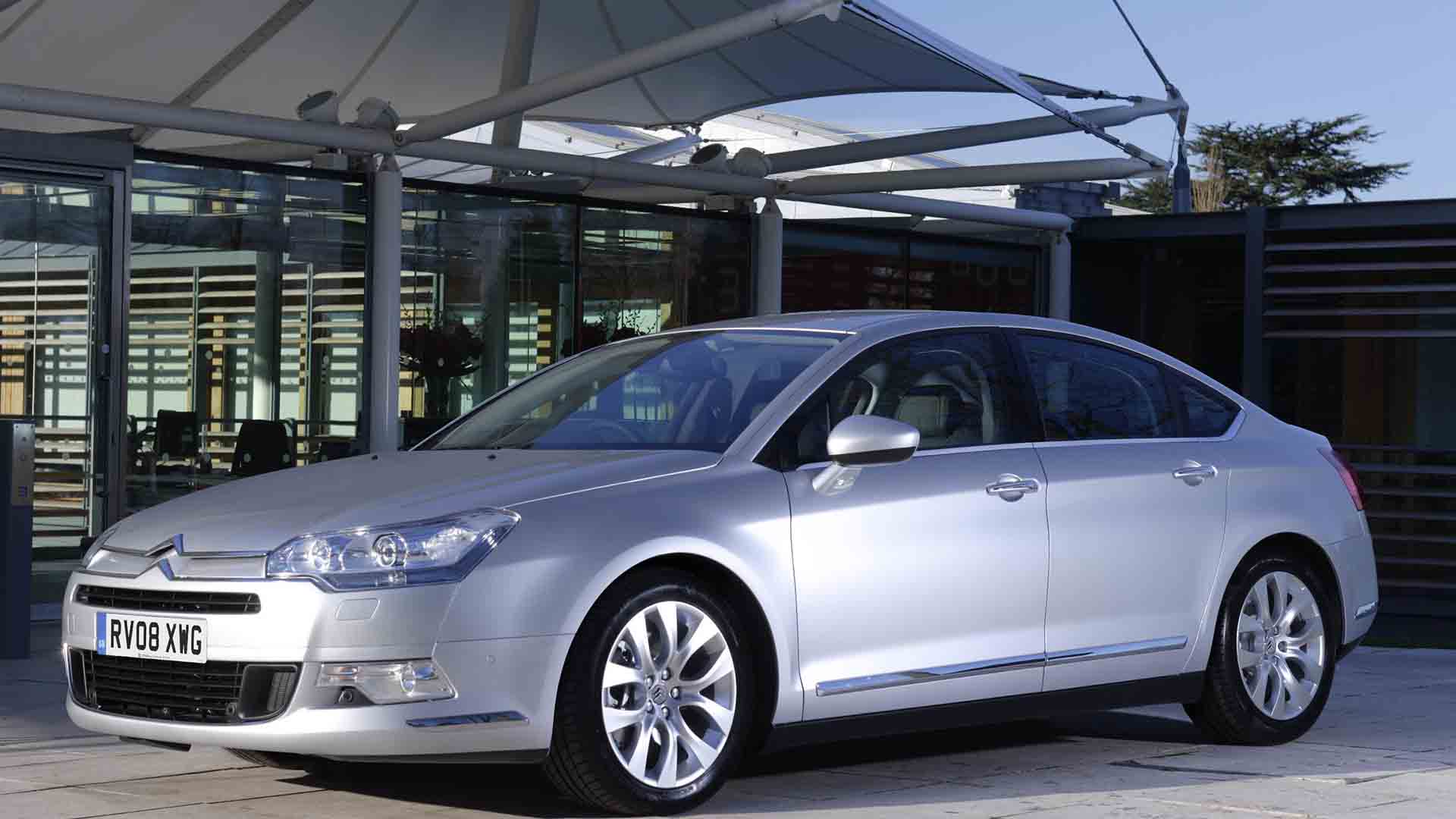 Citroen adopted a rather German stance with the second-generation C5. This had the effect of alienating its core audience, while failing to appeal to the majority of German car buyers. Nice job, Citroen. 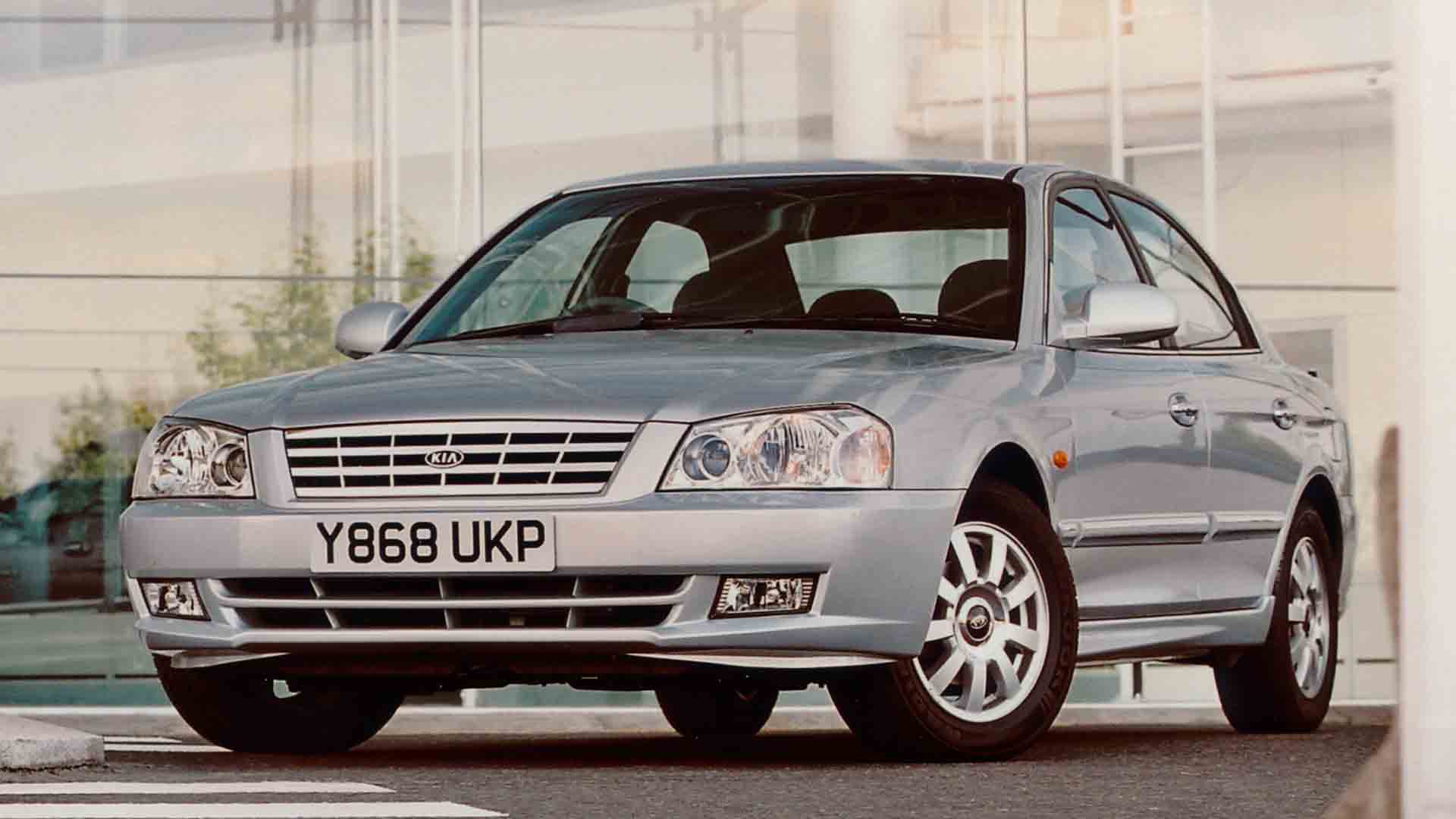 By now, you’ll have disappeared to read that ‘20 amazing hairstyles of Kim Kardashian’ feature that appeared as a suggestion in one of the boxes below. Which means you’re not here to discover the Kia Magentis on the list of luxury cars. We wonder if Kim has ever driven a Magentis?