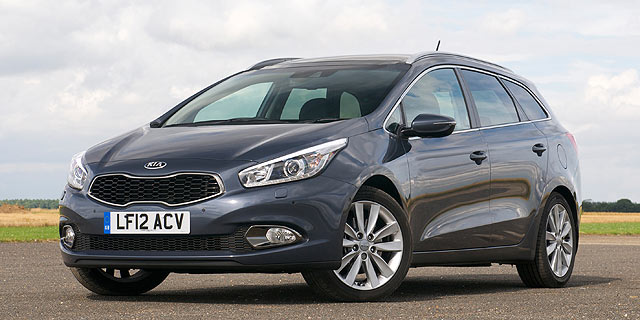 The Korean family estate car that Audi built. Well, you could imagine Audi building it. High praise indeed. Needs a better engine, though.

Peter Schreyer hasn’t designed an Audi in more than a decade yet rarely is he referenced without mention of the Ingolstadt giant. Kia must be in two minds about this. The link between the brands is nice but what about all the nice cars for his new employer he’s designing?

The Kia Cee’d Sportwagon is a fine example: a neat, stylish C-segment estate car. Don’t take good looks for granted with this sector of load-lugger: that the Kia does them so well is reason enough to choose it. Wouldn’t you much rather have one of these instead of a Renault Megane ST, a Ford Focus estate or, indeed, a Hyundai i30 estate?

That the hatch is so well priced against bigger-selling rivals means the estate actually offers an intriguing alternative alongside them: same prices, more space, more practicality. That’s perhaps why so many Cee’d sold in the UK are Sportswagons.

The LED lights add sparkle but the secret is the contours in the side section: Germanic attention to design detail.

The diesel is clattery but works. That’s about it. It’s a bit quicker than 1.6 rivals but it’s still a white goods engine.

Good enough to give an almost hydraulic feel at slow speed. Firmer at speed: the occasional foolish thud surprises.

Audi-like. If Audi built cars for the mainstream, the quality would be this good. Audi instrument colours underline the reference.

If only the Audi A4 Avant were this practical, had this much space in the back, had a boot this well laid out.

Don’t like voices on your sat nav? Drat: it defaults on in the Cee’d so you have to turn it off again each trip…

If the Cee’d doesn’t feel very fast, try pressing the accelerator beyond the bumpstop. 20 per cent power boost, it feels.

Auto wipers are nice but do they really have to scrape across a bone-dry screen each time you start it up?

Audi would approve of the interior detailing and choice of materials in this: it’s a very nice place to be.