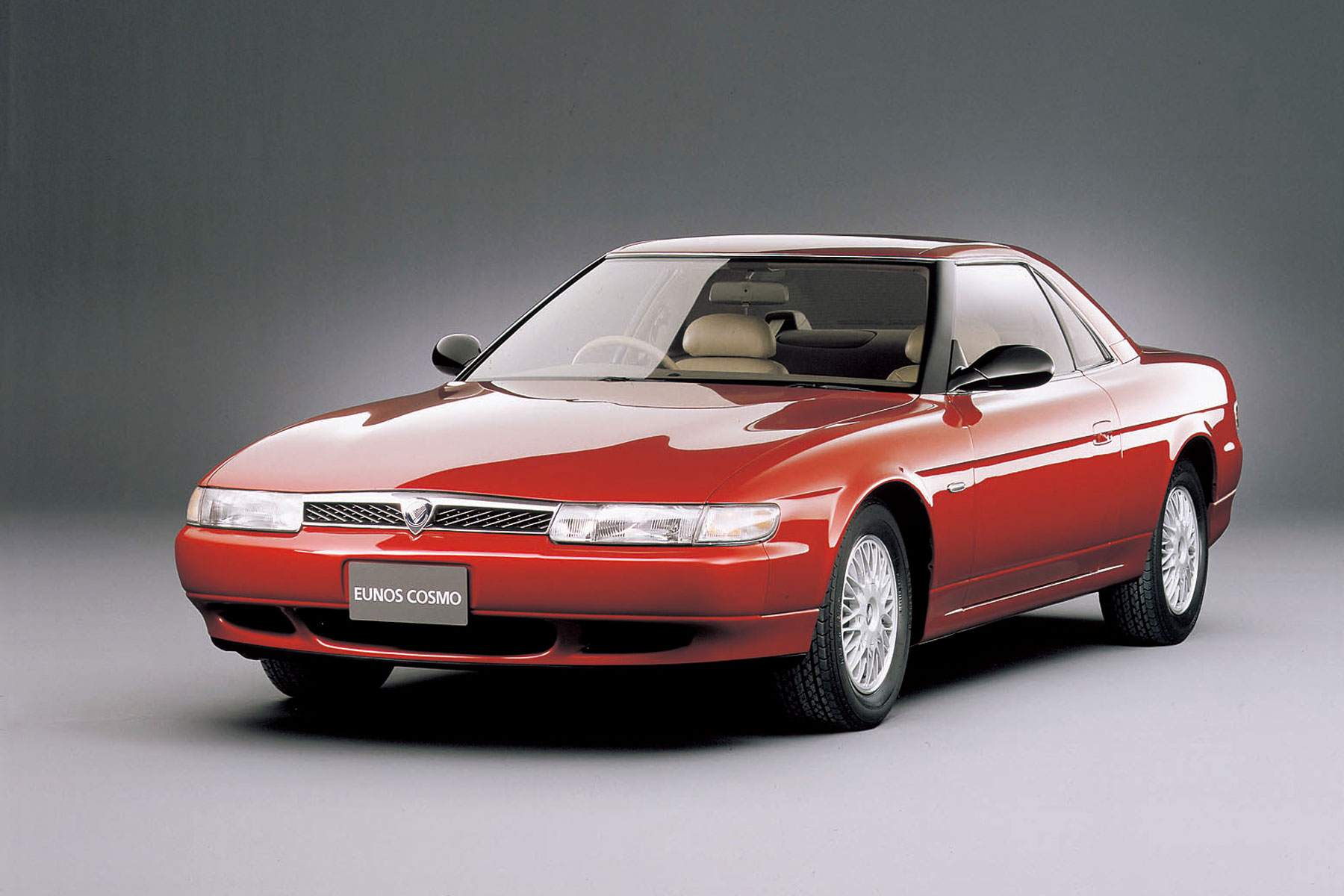 Do you remember when Dany Bahar and Lotus rolled into the 2010 Paris Motor Show armed with five new models? At the time, it was surprising, not to mention a little bizarre, but with the benefit of hindsight, it was overly ambitious and foolhardy.

Now imagine something similar, not with five cars, but with five entirely new brands, and spread across an entire decade. This was Mazda’s world in the 1990s, with the company embarking on a project that could be dismissed as a huge leap of faith.

That’s a tad unfair because Mazda’s strategy wasn’t without merit. It’s easy for us to sit here and judge things on the strength of a Wikipedia page, but fortune favours the brave, and nobody ever got anywhere in life without taking a risk or two.

Mazda wasn’t content with being Japan’s fourth-biggest car manufacturer – it had eyes on the number-three slot behind Toyota and Nissan. There was every reason to be optimistic, not least because Japan was enjoying its ‘bubble economy’, in which stock and property prices soared to new heights.

The story of Ryoei Saito, the head of Japan’s second largest paper manufacturing company, paying $82.5m for Van Gogh’s Portrait of Dr Gachet, only to spend another $78.1m for Renoir’s Au Moulin de la Galette two days later is just one example of the extreme wealth associated with certain quarters of society.

Mazda didn’t pay the over the odds for a Van Gogh or Renoir – although this may have been a better ‘get rich quick’ scheme – but the finances are just as eye-watering, with the company reportedly spending $1 billion a year from 1990 to 1992 on its mission to become number three. 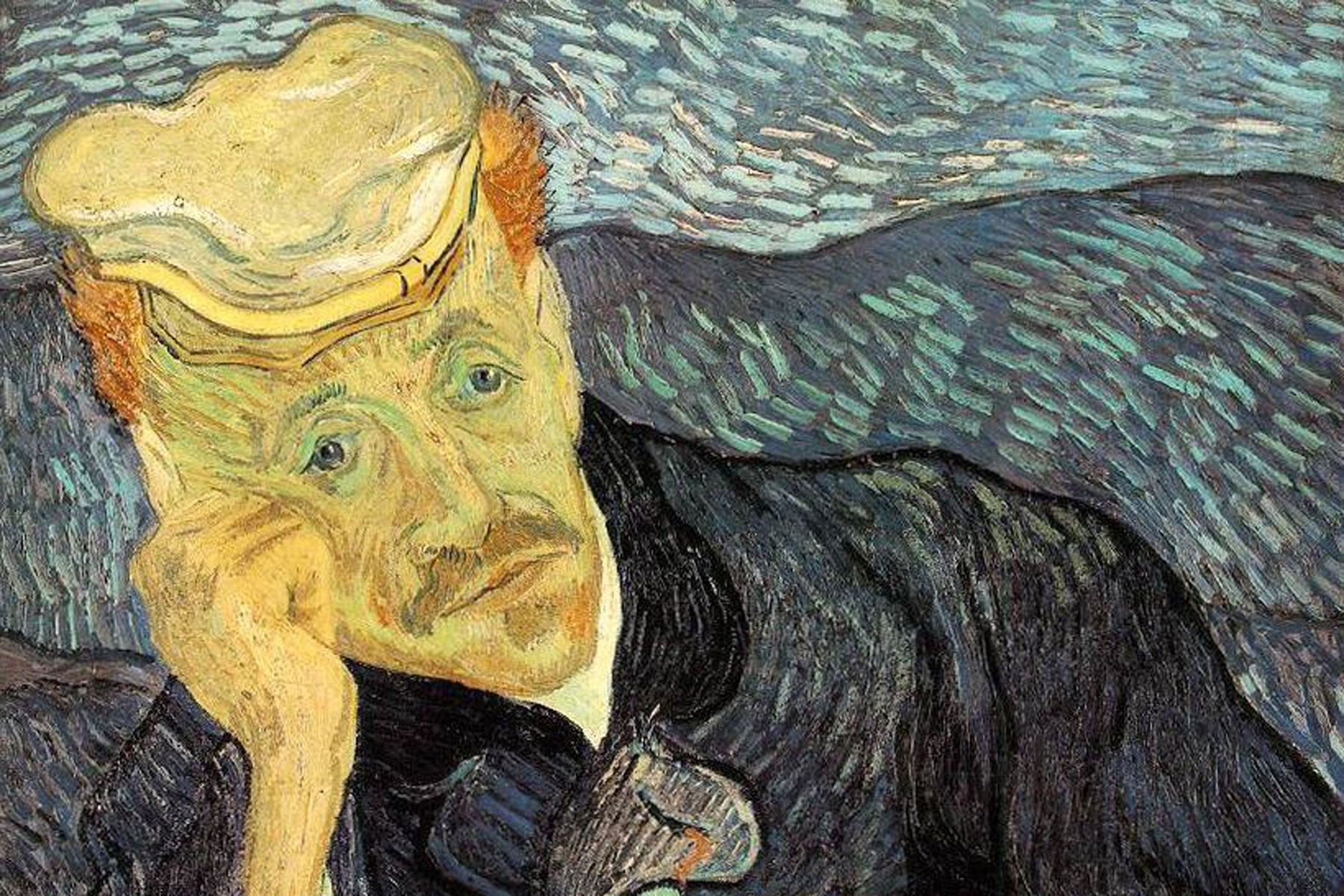 It couldn’t end well. Japan’s Nikkei stock average hit an all-time high in 1989, only to experience a catastrophic crash shortly after. The boom times following the Second World War were over – the 90s was a decade of belt-tightening, austerity and bank bailouts.

The car industry was quick to react to the implosion, with manufacturers hastily slimming their model ranges and focusing on beige econoboxes, but like a moth chasing the light of a bonfire, Mazda seemed oblivious to the impending doom.

By 1992, in the wake of substantial financial losses, Mazda’s position in the Japanese car industry had slumped from fourth to sixth, with Mitsubishi and Suzuki playing leapfrog with the Hiroshima-based company. In 1996, Ford invested $481m to increase its equity stake from 25 percent to a controlling 33 percent and effectively killed the sub-brands.

This is a very potted history of Mazda’s ill-fated attempt to dominate the market by creating all of the brands. But what became of the companies? 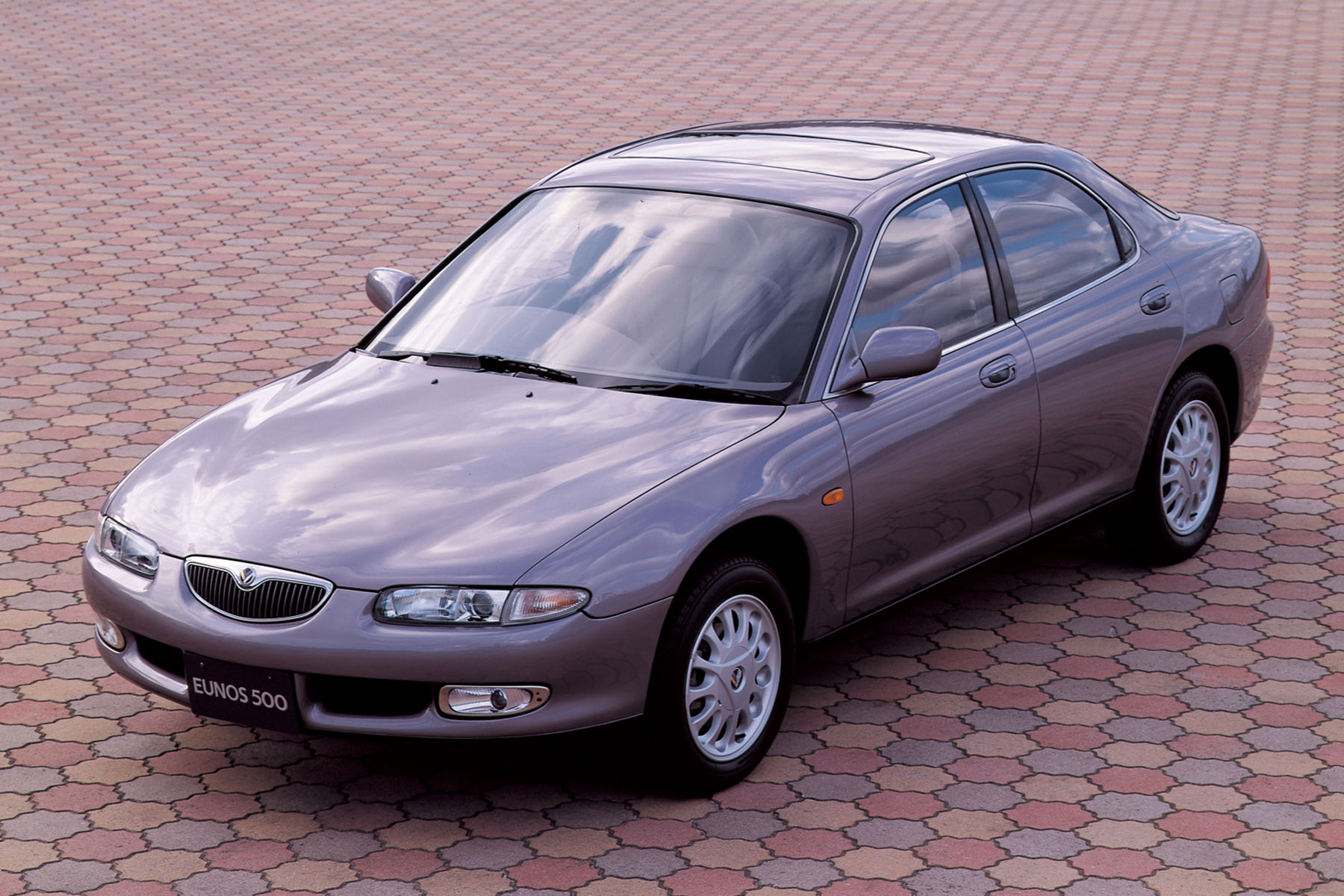 Amati promised so much but delivered so little. Indeed, of all the Mazda brands, Amati is the one that appears to have vanished without a trace. It’s a tale of high hopes and great expectations, but one that ends in failure and huge losses.

This was to be Mazda’s assault on the burgeoning North American luxury car market, following the lead of Acura in 1986 and Lexus and Infiniti in 1989. The plan was announced in 1991, with a launch scheduled for 1994.

There were to be four new models: a luxury coupe, two executive saloons and a high-end luxury car. Offices were secured in California, a new assembly line was created in Hofu at the cost of $500m, and 82 North American dealers were signed up to sell the new Amati range.

The plan was to target American customers with incomes of $75,000 or more, assisted by an advertising agency armed with a budget estimated to be $60m to $70m. Even in a growing market, the costs would have been astronomical, but Mazda was swimming in a dwindling pool against some of the industry’s big fish.

In October 1992, Mazda arranged a press conference in Hiroshima to announce that the Amati brand was dead before it had even started, a victim of Mazda’s falling sales, dwindling profits, a depressed market and the Japanese economy.

Twenty-five years later, members of the Amati management team, including general manager Mr Colliver, attended a reunion in California. Colliver said the death of Amati was “the saddest day of my career.”

Faced with budget cuts, Colliver felt Amati lacked the resources it needed to succeed. “We ran out of money,” he said. “I had to basically fire 50 people.”

The Amati name may have died in 1992, but the ghost of the failed luxury brand lives on in Xedos, Eunos and Mazda products. 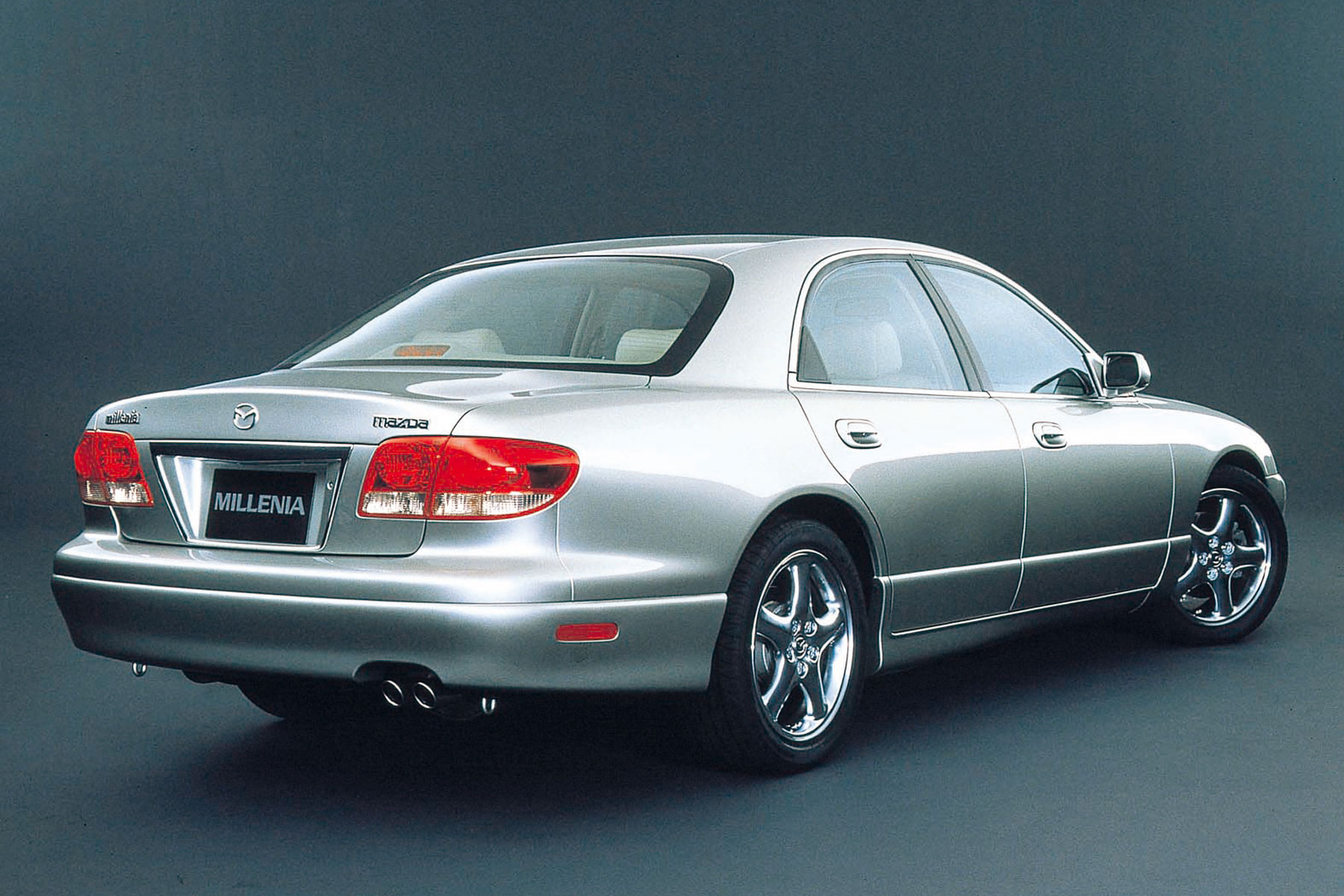 Take the Amati 500, which emerged a year later as the Mazda Xedos 9 in Europe, as the Eunos 800 in Japan and Australia and, in 1994, as the Mazda Millenia. The North American ad campaign was a tad disingenuous, proclaiming: “We put the money into the car and not into a luxury division and all that overhead.”

A dig at Lexus, Acura and Infiniti, but one that failed to recognise its own stillborn luxury division. At least Mazda had one valid point: customers could buy the Millenia for a price considerably lower than it would have cost with an Amati badge.

In the UK, we were offered the 2.5-litre V6 and the more interesting 2.3-litre V6 Miller Cycle. In short, the inlet valves are closed later at the beginning of the compression stroke, raising the cylinder capacity and increasing power without increasing fuel consumption. 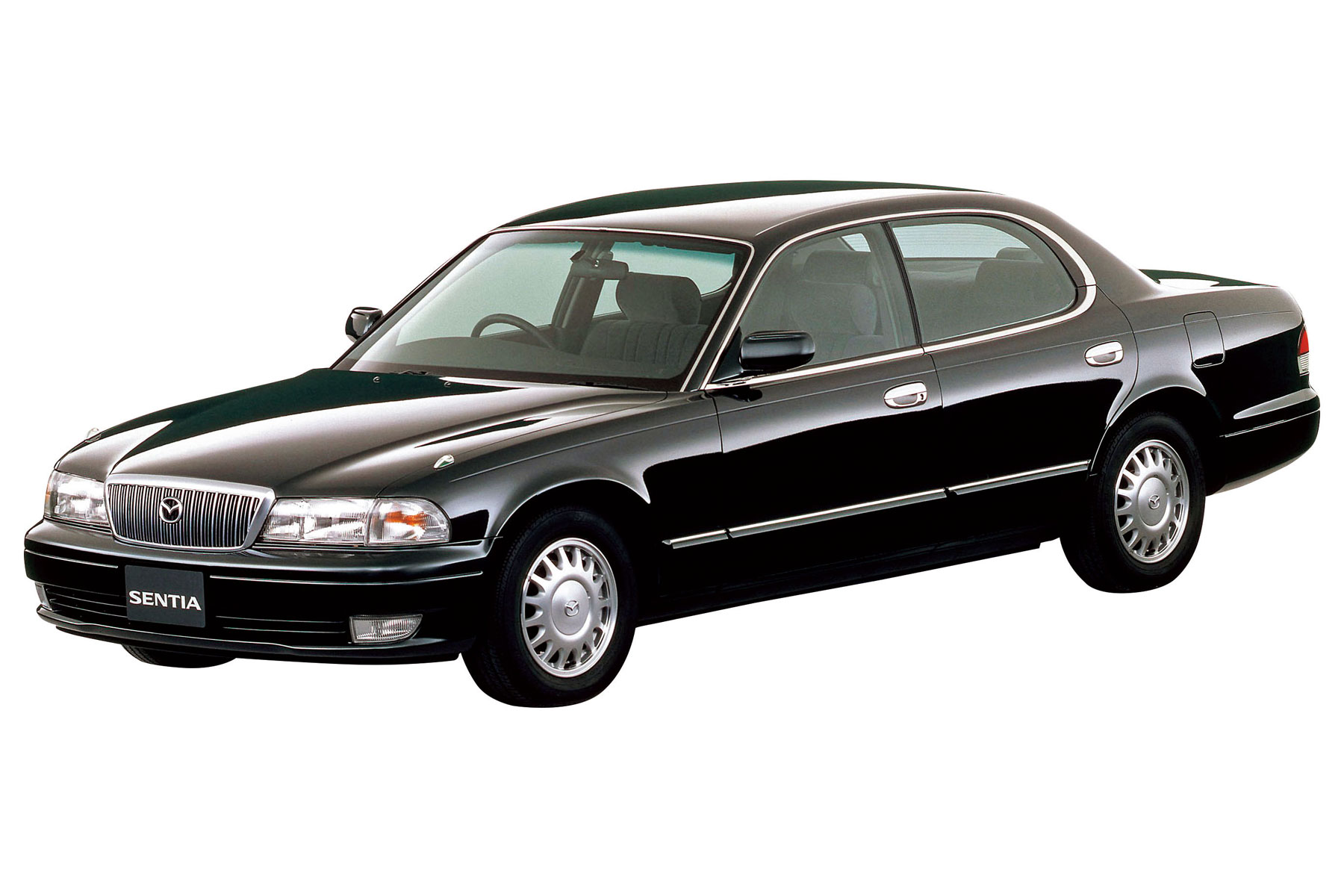 Sadly, the fabled Amati 1000 never saw the light of day. This was to be the brand’s flagship – a Lexus LS in an Amati suit. Power was to be sourced from a remarkable 3,981cc W12 engine with an aluminium block, heads and oil pan made of magnesium, and pistons and valves made of ceramic.

The W12, made up of three banks of four cylinders, debuted at the 1989 Tokyo Motor Show with a quoted engine power of 280hp. In reality, it was probably much more, but the output was limited by a gentleman’s agreement at the time.

As for the Amati 1000, it shares a striking resemblance to the second-generation Mazda Sentia/929, which in turn became the Kia Enterprise. If only a W12 motor had powered them… 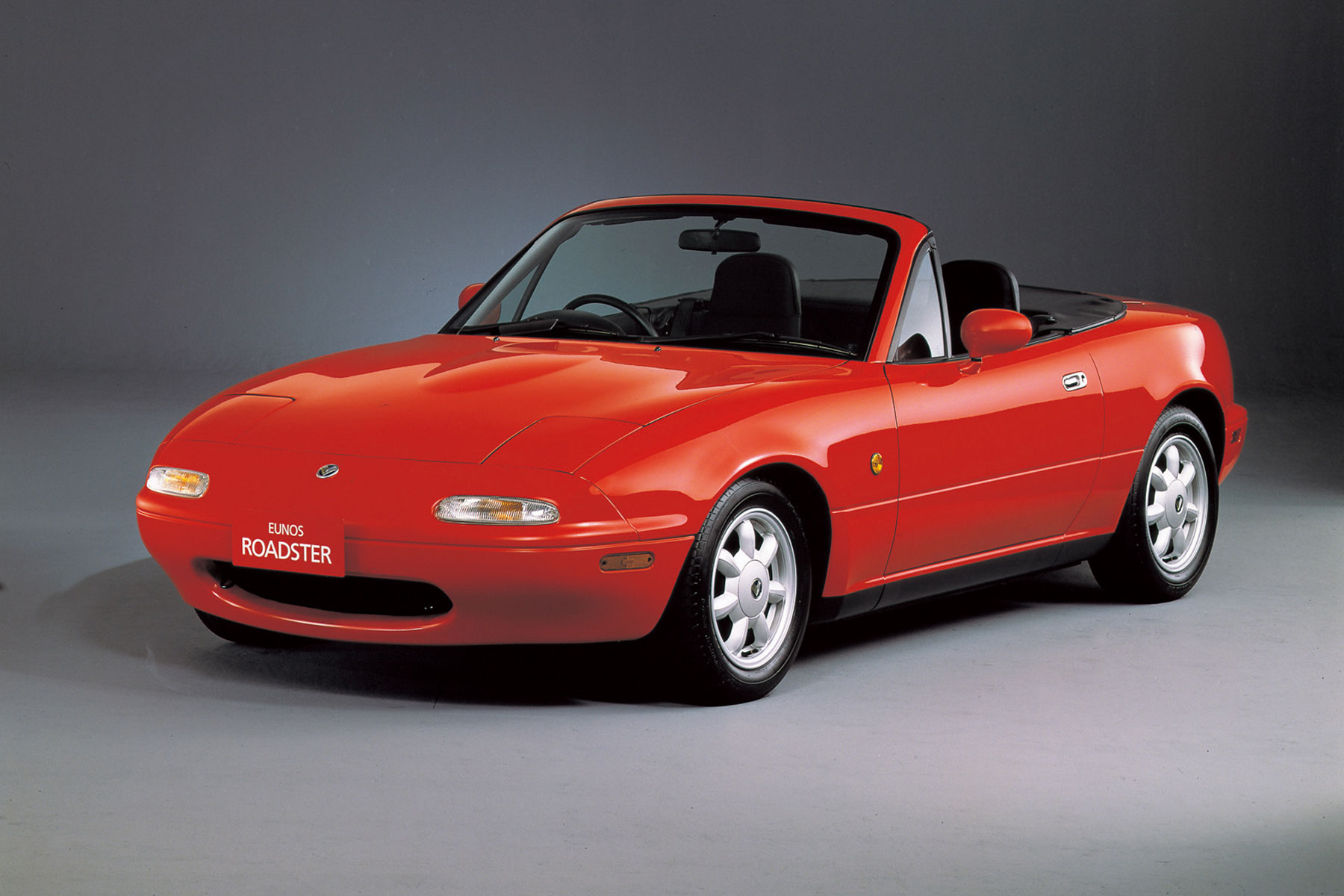 Eunos will be familiar to anyone who has imported a Mazda MX-5 from Japan, as this was the name given to the roadster in its domestic market. As an aside, Amati is an anagram of ‘Miata’, the North American name for the MX-5.

There’s some overlap with the Amati brand because the achingly cool Mazda Eunos Cosmo was destined to be the luxury coupe for the failed North American brand. It would have been a fitting car for a brand focused on sporting luxury.

It featured a touch-sensitive computer, the first twin-rotor Wankel engine and the world’s first in-car GPS navigation system. In 1990, renowned motoring journalist LJK Setright as near as makes no difference declared it the best car in the world. High praise.

The Eunos story began in 1989 when Mazda established a dealer network for its new Roadster. In the family tree, Eunos was to be the playful brand, focusing on upscale, fun-to-drive cars. 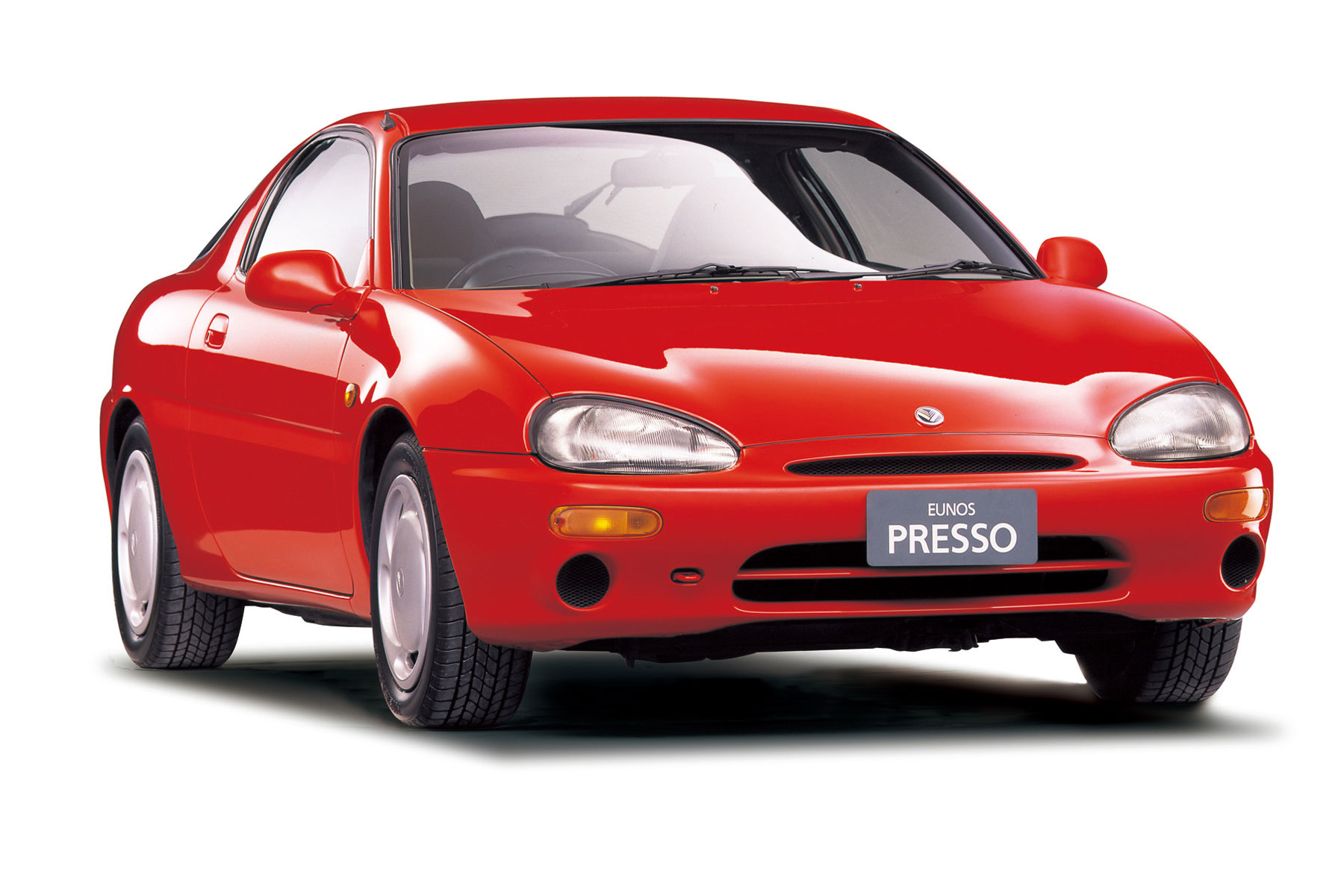 Future models included the Presso, known in the UK as the Mazda MX-3, as well as the Eunos 500 and 800, known here as the Xedos 6 and Xedos 9 respectively, and two further examples of Amati hand-me-downs.

By the mid-90s, the writing was on the wall for Eunos and dealers were integrated into the Mazda and Efini network in 1996. Two years later, the Eunos 800 became the Millenia, signalling the end for the sub-brand. 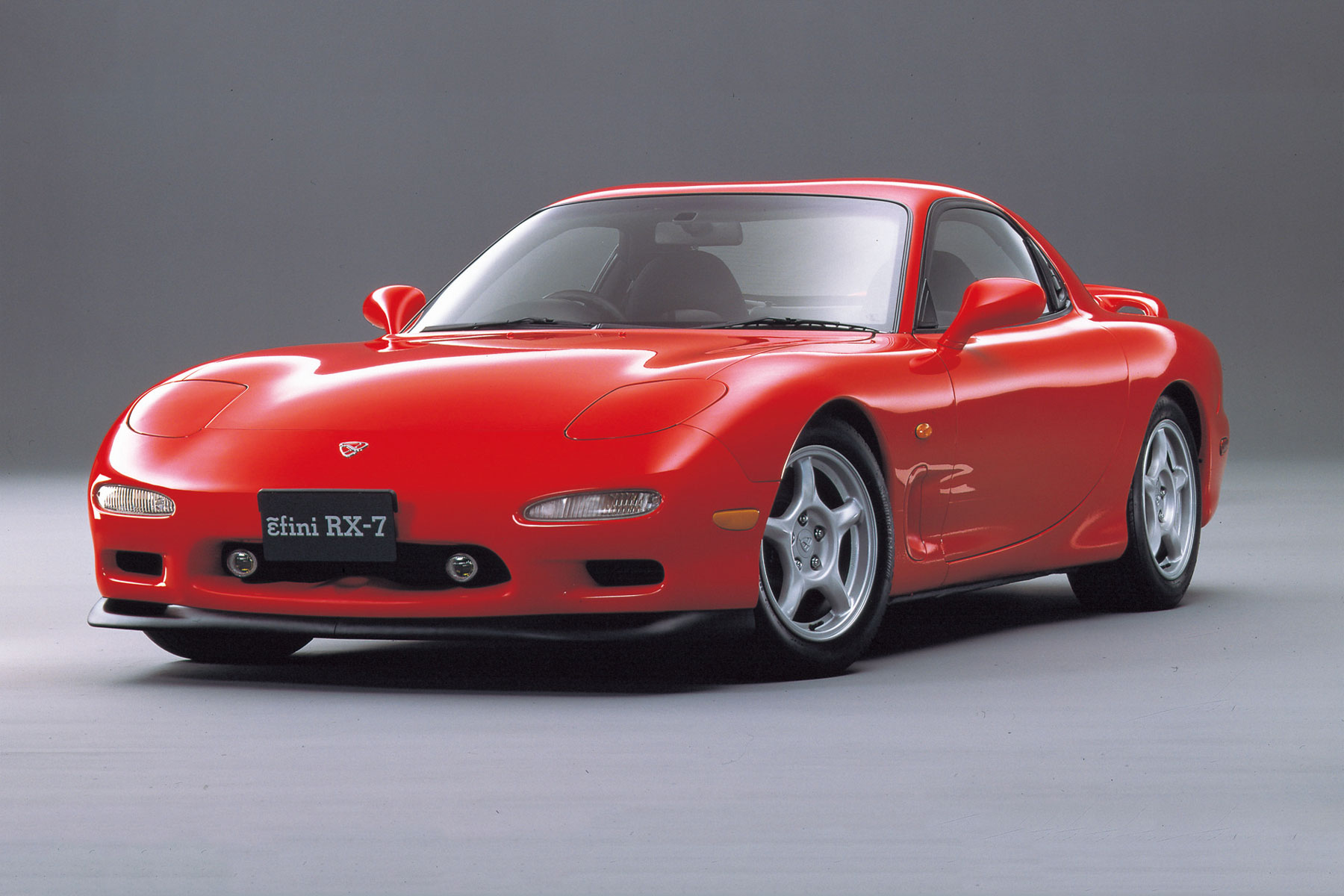 More upmarket than Eunos, but one of three luxury brands in the portfolio, Efini (or Anfini) operated between 1991 and 1997. Most models were rebadged Mazdas for the Japanese domestic market, but one bespoke car stood out – the MS-8.

It featured pillarless doors, which immediately catapults it up the list of cool cars, with a transmission shifter located on the dashboard, creating a front bench seat for that ultimate feeling of luxury.

It died along with the Efini brand, while the other cars went back to existing as common or garden Mazdas. That’s if you can class the RX-7 as ‘common or garden’, which of course you can’t. 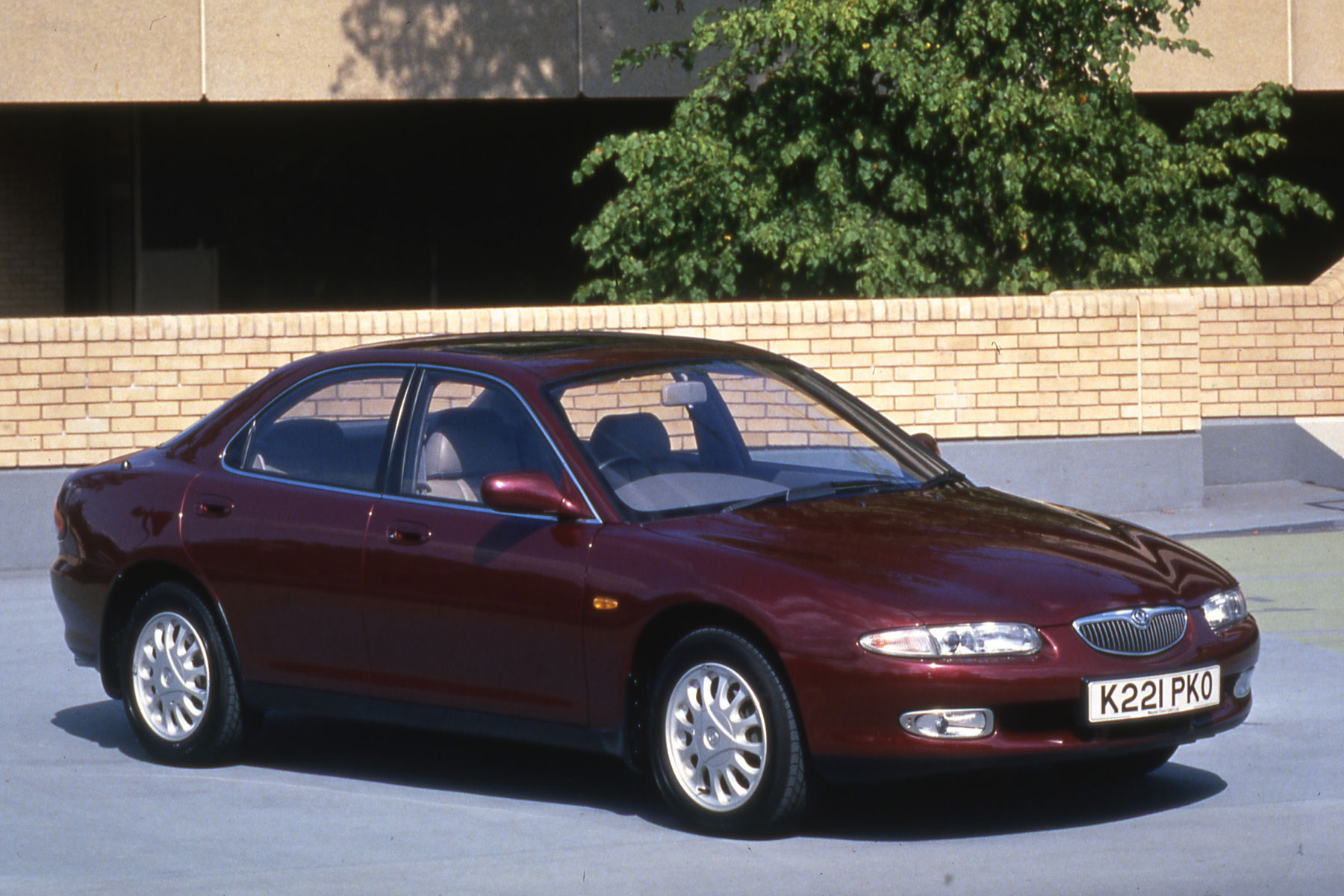 Look, mom, another brand! Even without the benefit of hindsight, the decision to launch three separate luxury brands looked doomed to failure. Although each one was targeted at different continents, Amati, Eunos and Xedos were chasing a slice of the same pie, albeit with Efini’s sporting angle.

The Xedos 6 and Xedos 9 would have been the Amati 300 and Amati 500 in North America but were also the Eunos 500 and Eunos 800 in Japan. Mazda hoped to convince UK buyers that this was a credible alternative to Lexus and the established European players.

‘This summer sees a rather special event in the motoring calendar. The launch of a car that is genuinely different from the rest. It’s called the Xedos 6,’ proclaimed Mazda in 1992, before laying into the Germans with a direct reference to their ‘spartan interiors’.

It was a fine looking car, featuring a low front end, subtle curves, flush-fitting glass and deep and glossy paintwork, with more than a hint of a two-door coupe in the overall look. Certainly better looking than the somewhat anonymous but admittedly handsome Xedos 9.

Sales didn’t come easy. Consumers failed to grasp the concept of an upmarket Mazda without a Mazda badge – let alone know how to pronounce ‘Xedos’ – and many stuck with BMW, Mercedes-Benz and the increasingly popular Audi.

There was no doubting the quality of the products, but you have to wonder if they would have been good enough to cut it in the North American market. 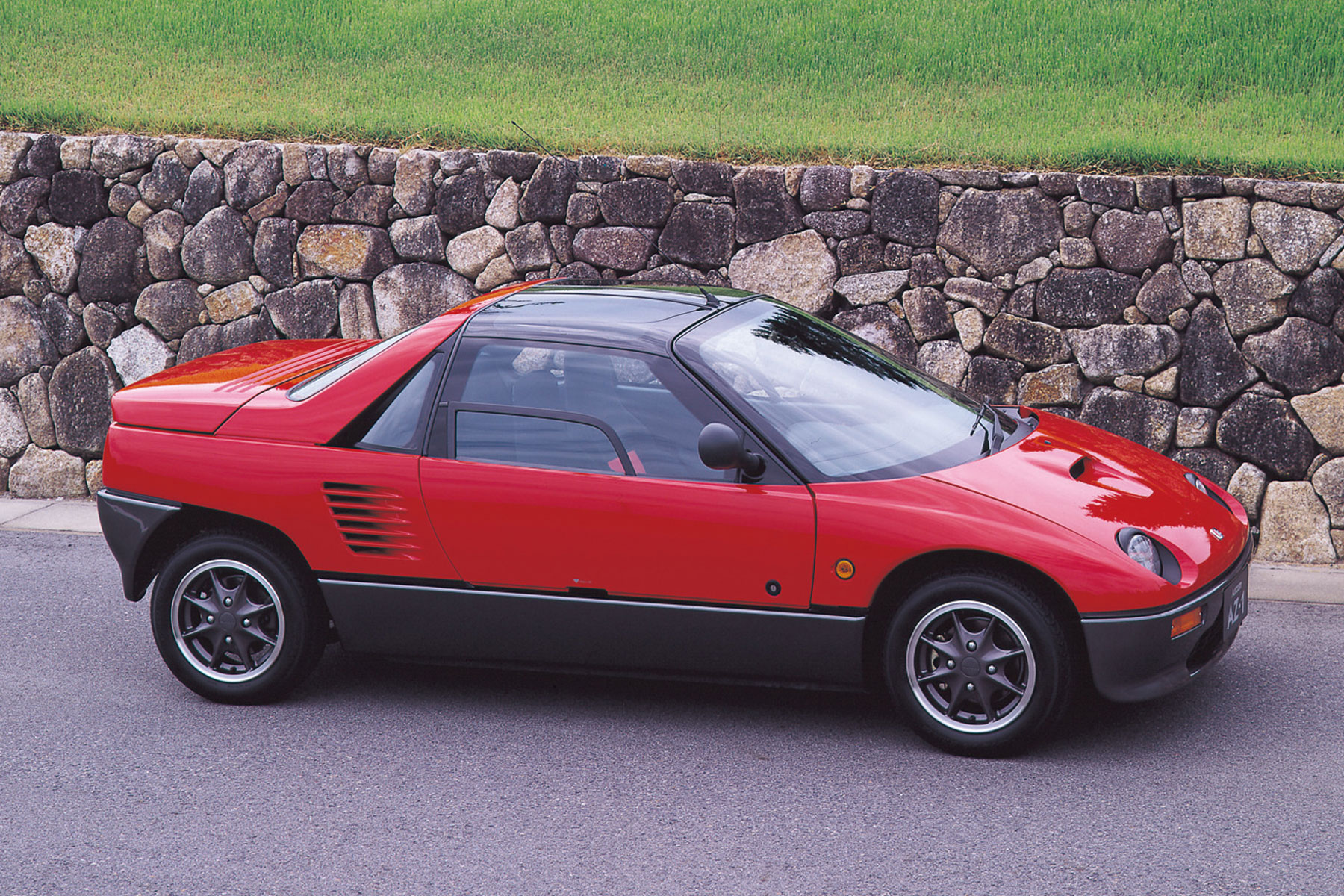 To car enthusiasts, the Autozam name means one thing: the AZ-1. Launched in 1992, the little sports car was built and powered by Suzuki and featured a pair of gull-wing doors. Just 4,392 were made before the AZ-1 and the Autozam brand fell victim to the recession.

Mazda established Autozam in 1989 as a brand focused on entry-level and kei cars, many of which were rebadged Suzuki vehicles. For the Autozam Carol, AZ-Wagon and AZ-Offroad, read Suzuki Alto, Wagon R and Jimny respectively.

The cute and curious Autozam Revue made its way to the UK as the Mazda 121, while the Autozam AZ-3 is more commonly known as the Mazda MX-3. As an aside, the Autozam dealer network also offered Lancia products to the Japanese market (Eunos sold Citroens).

Whatever your thoughts on Mazda’s product strategy of the 90s, it represents a fascinating chapter in the history of the Japanese car industry. In a parallel universe, Mazda may have succeeded, and it could have realised its dream of becoming Japan’s third-largest automotive company.

You have to admire the ambition. Mazda even established a boutique brand focused on allowing customers to speak to designers and engineers about their ideal car. The M2 brand is evidence that Mazda aimed to do things the right way – and that it valued feedback from its buyers. How refreshing. 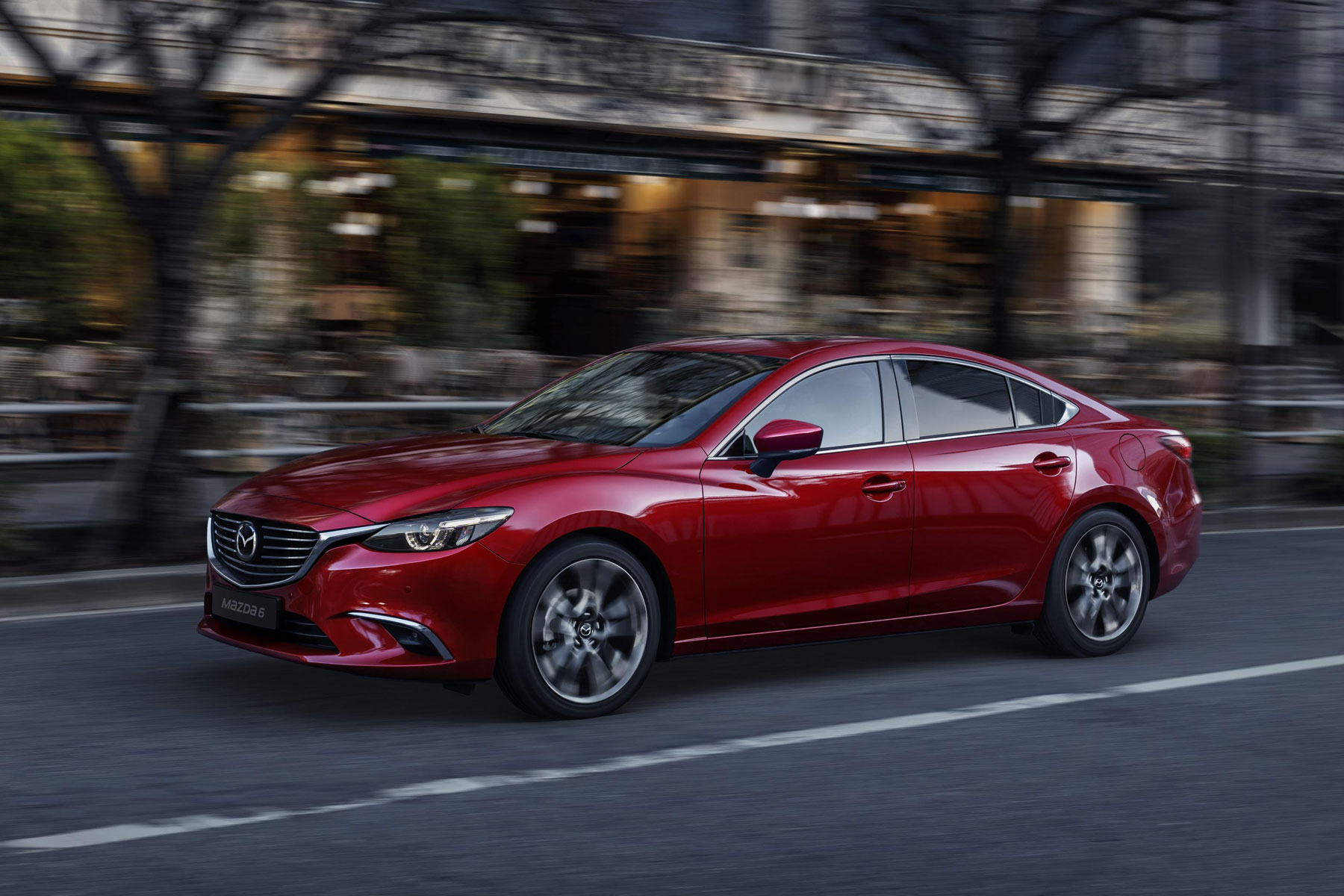 Today, Mazda seems more content in its skin and isn’t a company known for taking wild flights of fantasy into the unknown. Its days of building sub-brands and playing ‘monkey tennis’ are over.

Instead, Mazda is responsible for the world’s most successful roadster, some of the most dynamically sorted hatchbacks and small SUVs you can buy and, in the case of the Mazda 6, one of the best looking saloon cars in the world.

We’re just left to wonder what might have been had the bubble not burst.

Mazda CX-30 review: small SUV is the same, but different