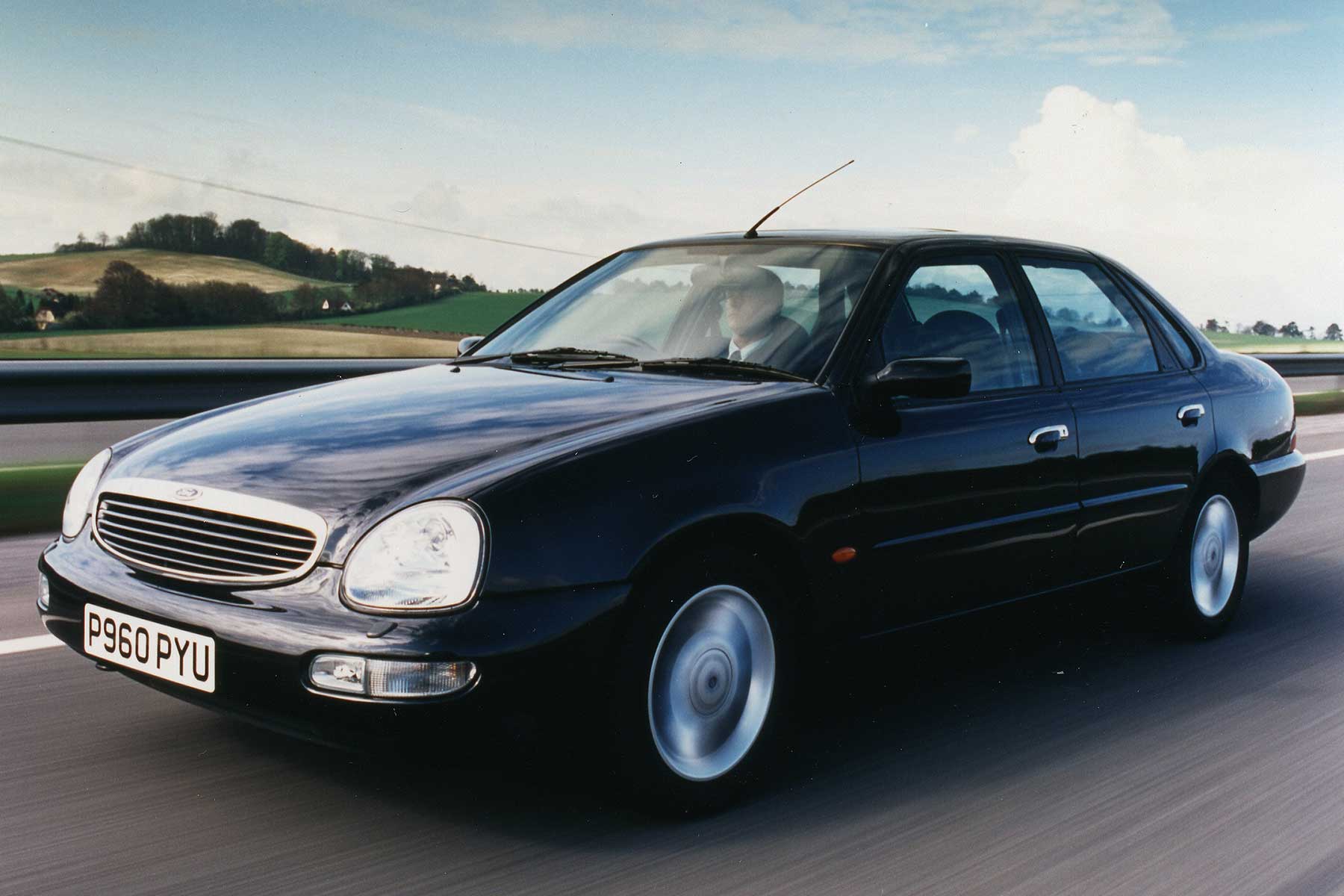 Ford knew it had a problem. How it got to have this problem is a little harder to understand.

Nonetheless, in the few remaining months before the 1994 Scorpio’s launch, Ford’s communications machine realised that it must try to adjust the media’s minds – and fast.

What it had to talk up, explain or, at worst, excuse, was the look of the company’s new big car. A few scoop pictures had appeared in the press, and with them some uncomfortably acidic words.

Before all this, the Granada had been a comfortably familiar machine, the population well used to the bold, almost Citroen-esque car that arrived in 1985.

This smooth-nosed, curve-windowed hatchback was an arresting contrast to the quietly handsome, square-jawed Granada that had gone before. However, people were better prepared for the shock of the Blue Oval’s new, the jarring arrival of the Sierra three years earlier thoroughly softening their senses. 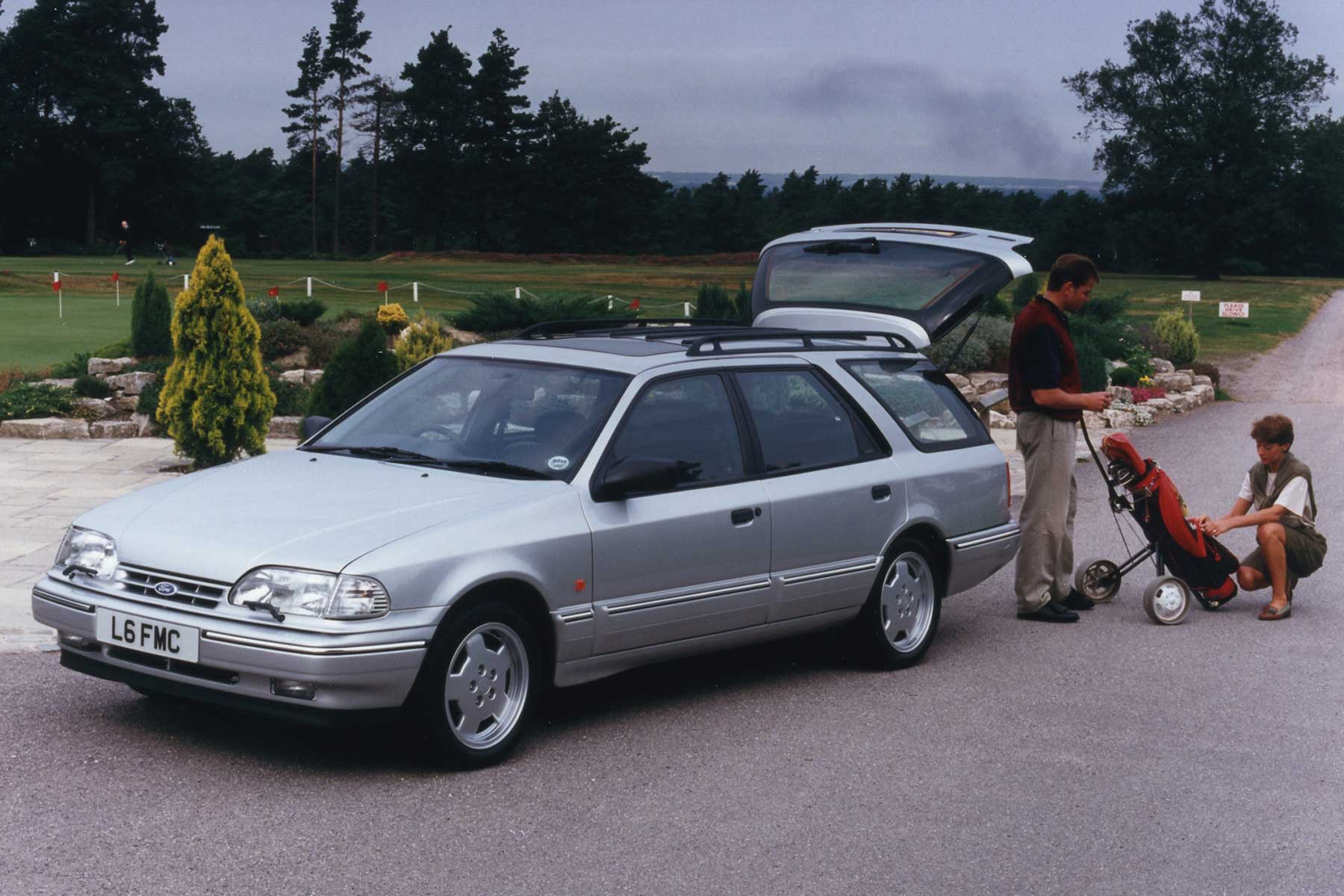 The Granada sold well, its spectacular cabin space, comfortable ride and hatchback practicality winning sales, as did its standard ABS brakes and a long list of equipment. Those unable to adjust to its hatchback silhouette were eventually offered a saloon.

The birth of the Scorpio

By the mid-1990s, though, the Granada needed renewing. Ford had already performed one minor facelift and should really have replaced the car completely, given its age. But the market for executive models from mainstream makers was dying, so it chose a light mechanical upgrade and reskin instead.

With this came a rebadging to Scorpio, this name used for the high-end Granadas in Britain and the entire model line-up elsewhere.

The word ‘reskin’, however, doesn’t really describe the transformation effected. The usual battery of words from the designer’s lexicon, like ‘stance’, ‘dynamic’, ‘looks like it’s moving when it’s standing still’, ‘proportion’ and ‘muscular’ didn’t really do it either.

Instead, you had to reach for adjectives used for some of the less winsome of Earth’s creatures; the Scorpio resembled something that David Attenborough might reveal from a dank cave in Borneo.

The front end was particularly troubling, your eyes irresistibly drawn to it before your brain fought over whether to focus upon the globular triangles of its headlights, or the reptilian gurn of its grille.

With a face like this, the new Scorpio’s oddly fat flanks were easy to pass over until you arrived at a plump rear end resembling a giant cushion.

Decorating it like an ill-chosen necklace was a gratuitously narrow strip of chrome-capped lights. Apart from the uncertain use of glitter, this was a tail that seemed to have nothing in common with the Scorpio’s nose beyond the doors that joined them.

This, of course, prompted many to mouth that old cliché about the car’s front-end being designed by people who had never been allowed anywhere near its rear. 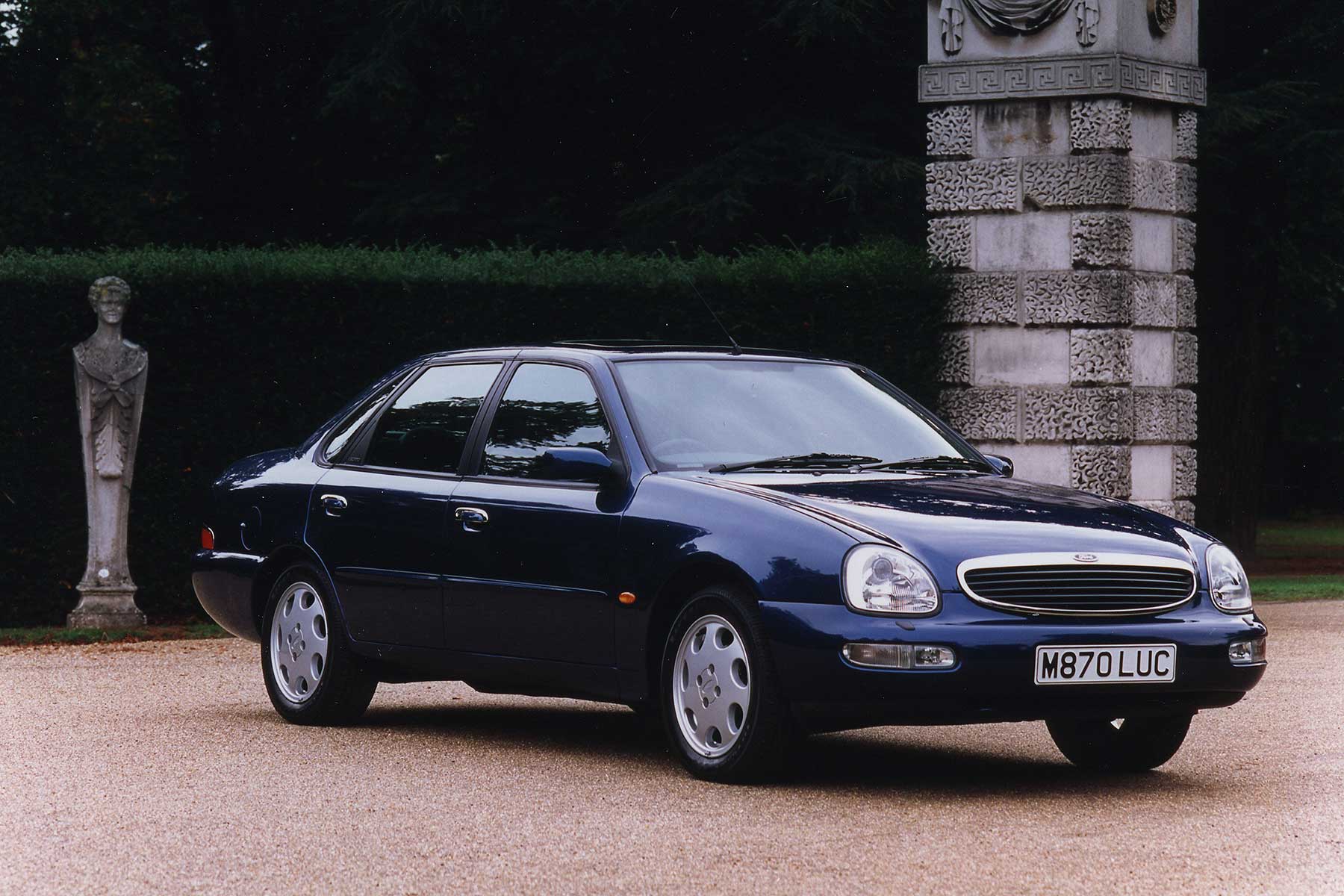 So, the new Scorpio was gargoyle-ugly. And all of a sudden the press was going to be shown the car, months before any test-drives, in an effort to persuade them that black was actually white. The (re) education was to take place at Ford’s Cologne engineering and design centre.

New European design boss Fritz Mayhew, who defended the car stoutly despite having no hand in it, kicked the proceedings off. And he gave the assembled hacks, your reporter included, an interesting and very plausible account of where car design had been heading during the past decade.

This was towards a uniformly bland, identikit look with grilleless noses, flat flanks and rounded corners that made loads of European cars – Fords included, although he didn’t say that – look two-dimensional, rather than three. And he was not wrong.

The antidote to this, Mayhew reckoned, would be the re-emergence of the radiator grille (as per the facelifted Rover 800 now outselling the Granada), the dawn of more sculptural lamps and the return of chrome. 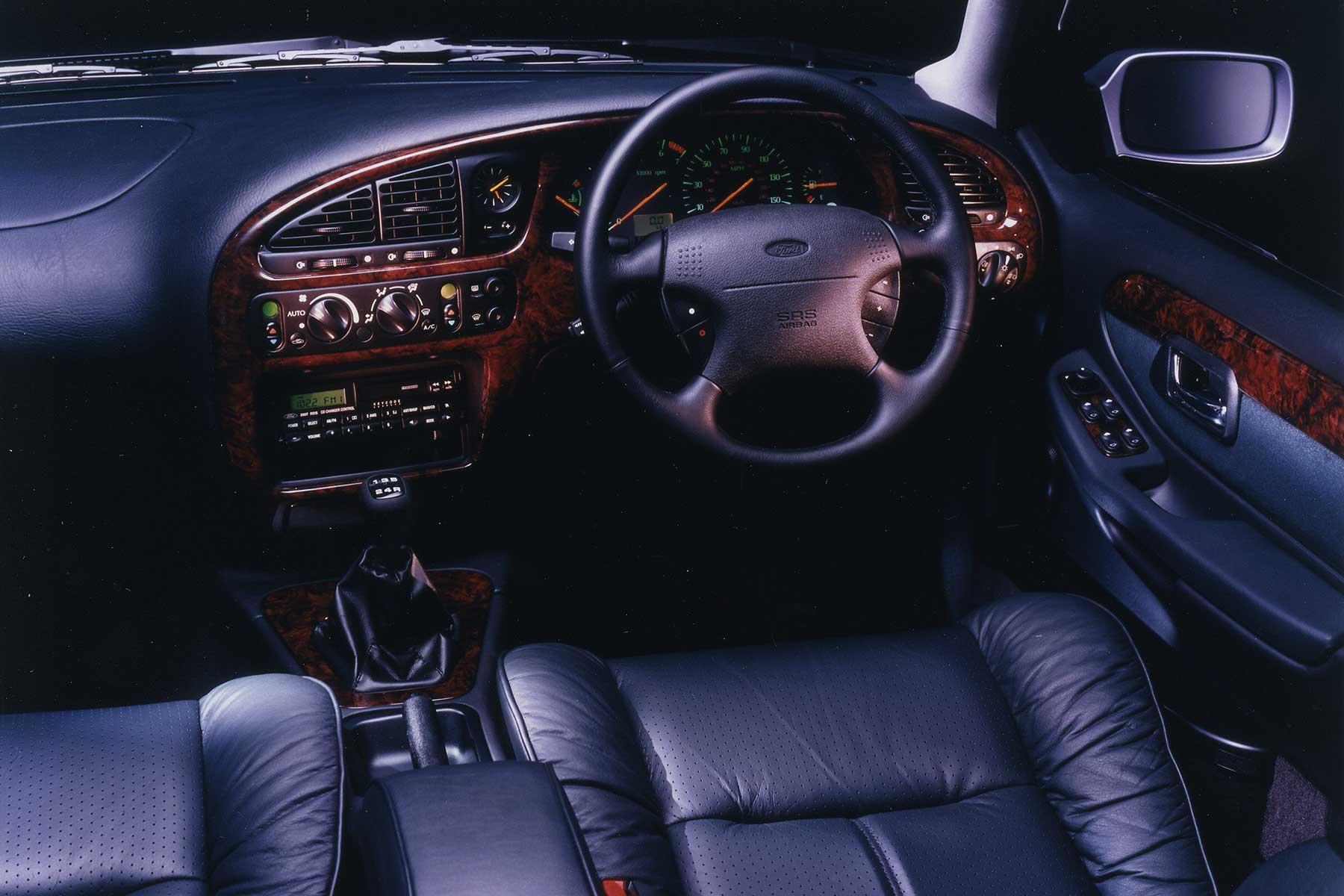 Then came a quick-fire sequence of pictures of handsome classic cars, each with distinctive grilles. Surprisingly, given what the 800 was doing to Granada sales, the first of these was of a Rover P5, followed by an Austin-Healey 3000, a Bristol 401, a Jaguar XK120, a Facel Vega and an Alfa Romeo Giulietta Spider.

There was much admiration in the room for Ford’s willingness to acknowledge the existence of good design from other carmakers, something that big corporations can rarely bring themselves to do. But admiration was in short supply when the new Scorpio was unveiled, mostly to looks of wonderment. And not of the positive kind. 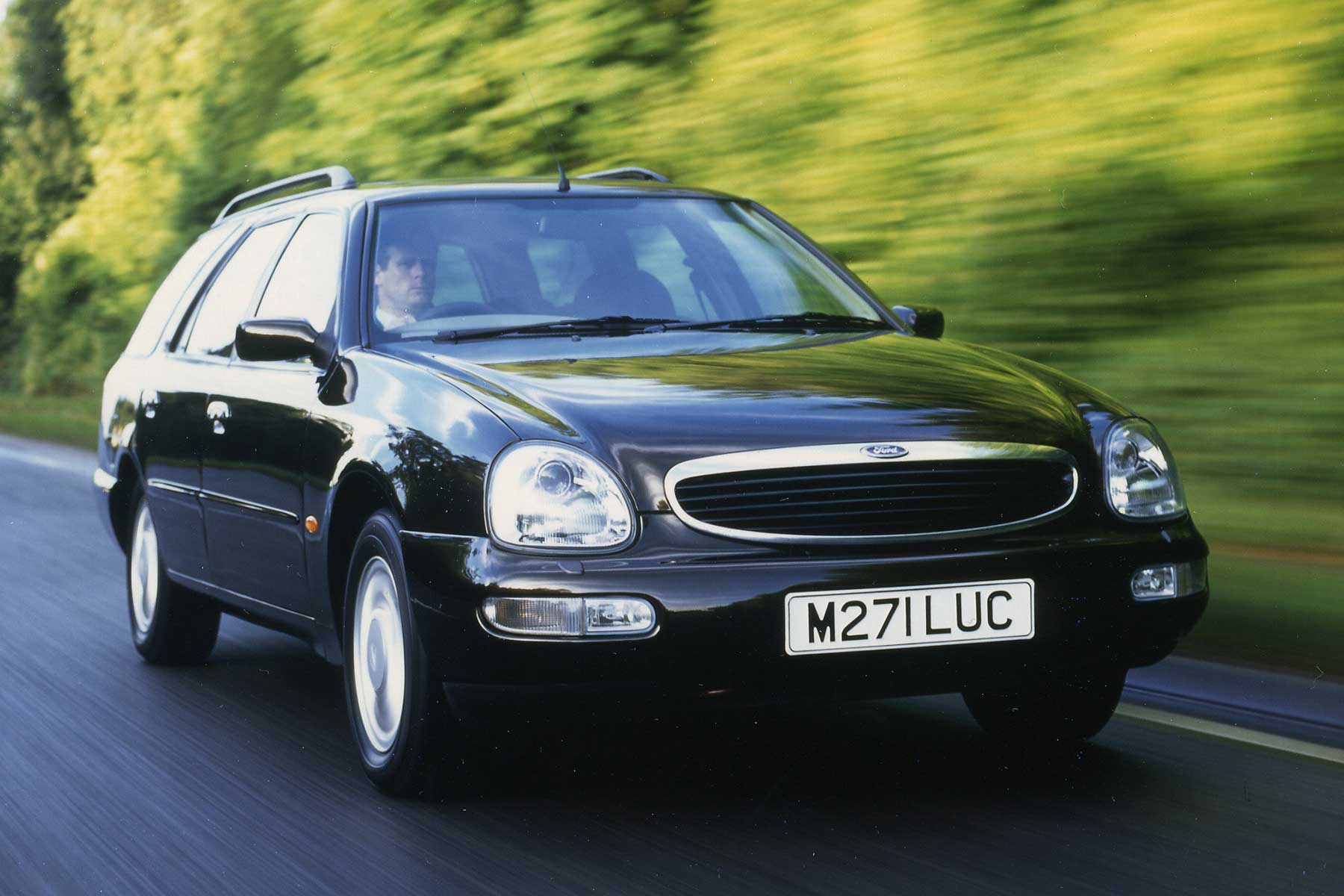 But you couldn’t argue with the design’s content. The new Scorpio was distinctive rather than Euro-clone in its looks. It had a face, it had chrome and it had a strikingly curvaceous dashboard, though much of this was filled with nasty ‘Timberlex’ wood rather than the aluminium that Ford’s designers had presciently reckoned it should flaunt.

A struggle for sales

Mayhew considered the Scorpio a signpost towards a newly individual design trend for Ford, rather than a breakthrough look – even if this was a worryingly unpromising start.

The Scorpio also proved worryingly unpromising in the showroom, the new car struggling to sell despite a considerable improvement in the way it drove. 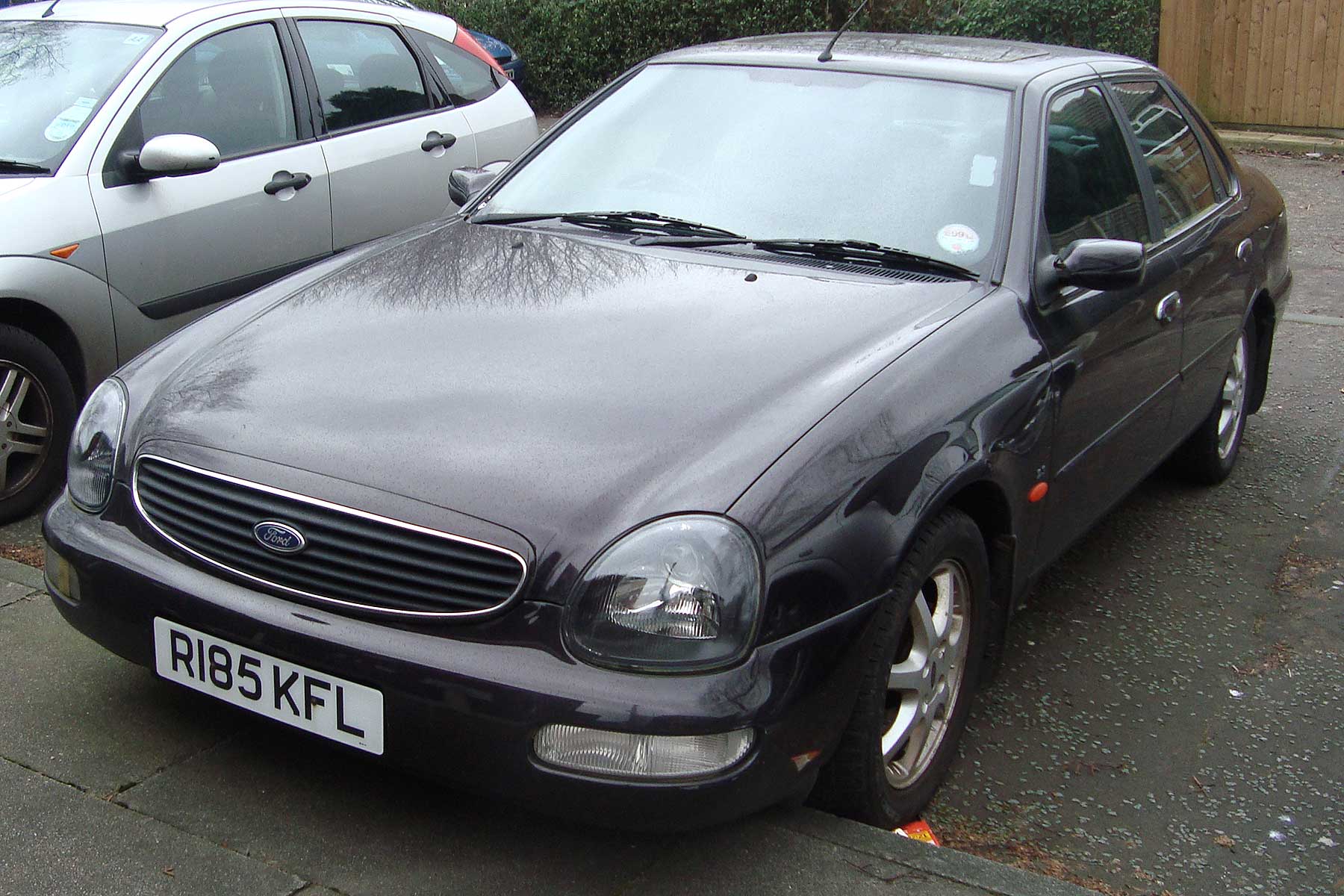 Ford’s designers gave it one more tweak two years before its death in 1998, darkening its headlights to make it look less bug-eyed.

Yet despite its unsettling aesthetics, the Scorpio previewed a rich era for Ford styling, the company’s adventurous ‘New Edge’ design philosophy producing ground-breakers such as the 1996 Ka and 1998 Focus. The success of these soon eclipsed the embarrassment of the Scorpio.

We reunite TV star Lotus Cortina with its overjoyed owner