The Morris Marina had a reputation for understeer: but will it drift? 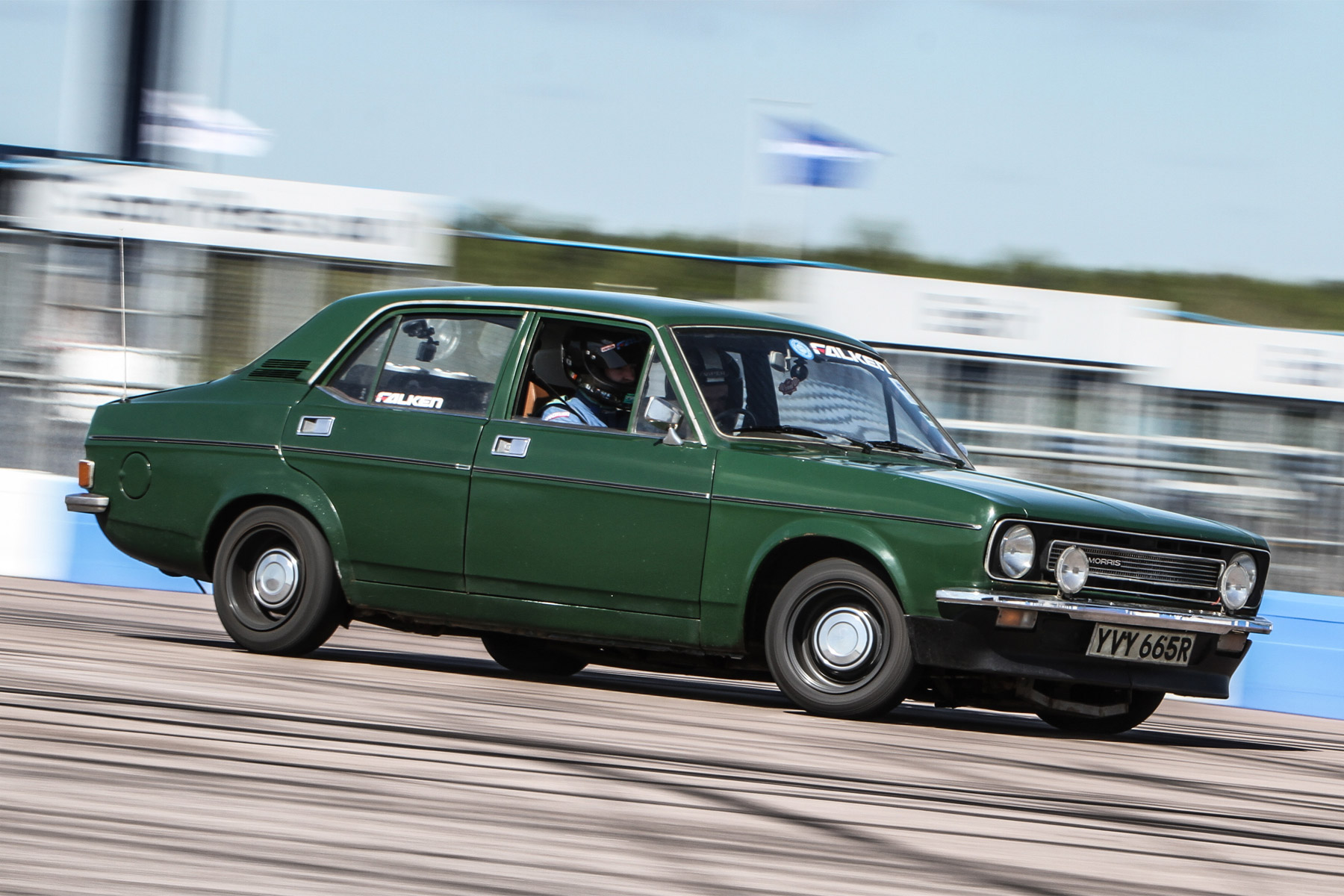 I’ve just broken a man’s Morris Marina. There are owners’ clubs stickers in the window. It’s a rare beast and his pride and joy. And it’s just relieved itself of oil all over the floor while I was doing doughnuts in it.

Fortunately, Patxi Beasley is a pretty chilled guy. A young lad who works for a Land Rover specialist, I ask him how on earth he came to own a Morris Marina.

“I wanted a car from this era,” he told me. “And it needed to be rear-wheel drive.”

Of course, back when the Marina was launched in 1971, most of its competitors were rear-wheel drive. But the Marina seemed a bit of a backward step for British Leyland. The firm had been pumping out the Issigonis-designed Mini for more than a decade, the front-drive Austin Maxi had been introduced two years earlier, and the ‘innovative’ Allegro was on its way.

But rear-wheel drive is what the market wanted, so it’s what the market got. The Marina was a moderate success for BL – regularly appearing in the top three cars on sale in the UK, despite receiving a bit of a pasting from the automotive press for its understeer-prone handling.

Today, the Morris Marina hasn’t got a brilliant reputation. Jeremy Clarkson described it as “one of the worst cars ever made” and, after offending the owners’ club by setting one on fire, the ex-Top Gear host would regularly drop a piano on one as part of an ongoing gag. 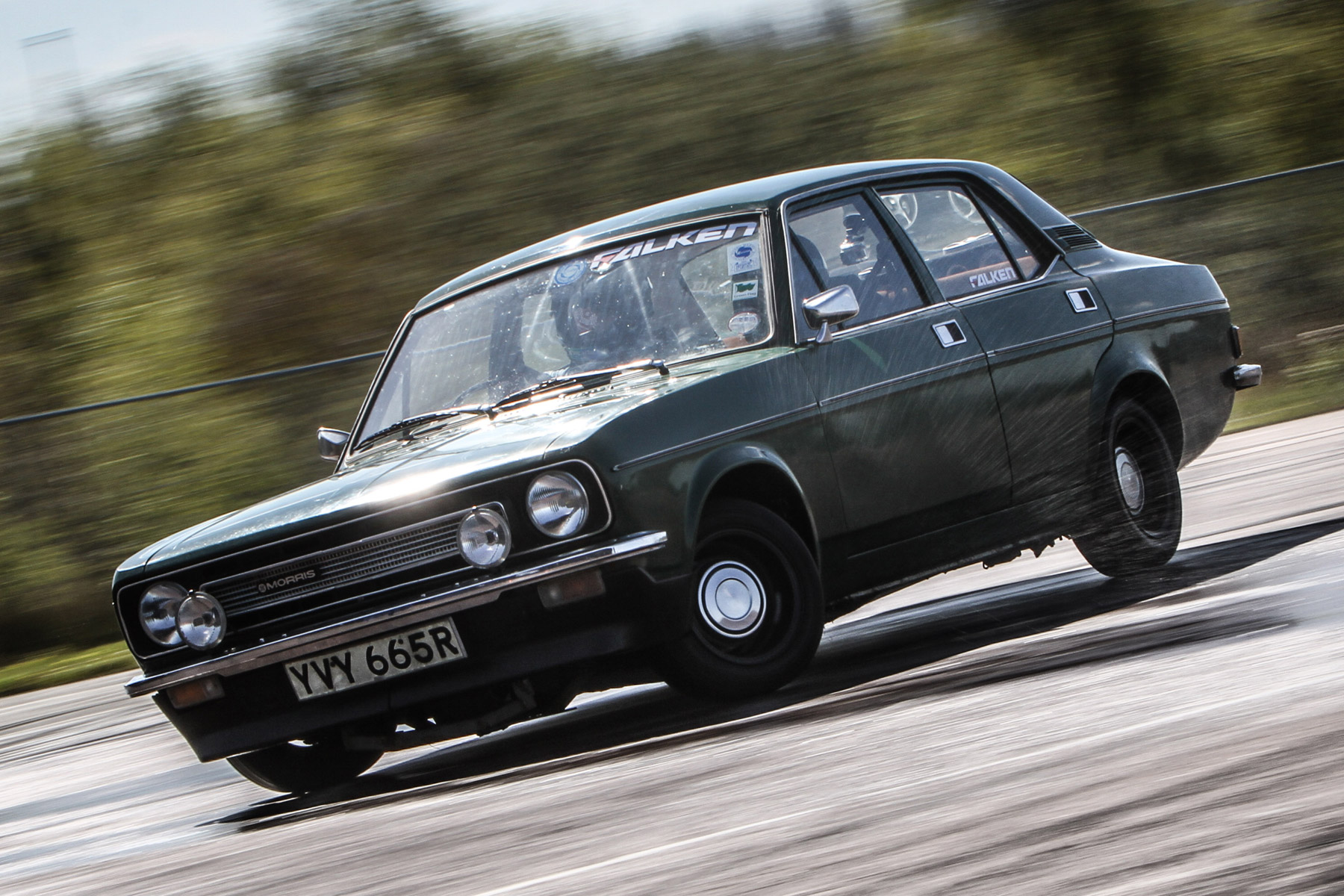 The advantage of buying a Morris Marina today over the likes over a first- or second-generation Ford Escort is its price. No one wants them.

So why is Beasley so relaxed about me breaking his pride and joy? Well, because it’s not exactly original.

“It’s got a 2.0-litre Ford Zetec engine in it out of a Mondeo at the moment. It hasn’t been right for a while. We’ve got a pile of engines, so I’ll just do a swap.”

The Marina’s infamous rear leaf springs (partly the cause for the ‘bad handling’ claims by motoring journalists at the time) have been replaced by coilovers. And the differential has been welded. The result? A Marina that’ll go sideways quicker than you can say ‘live rear axle’.

Video: watch us learn to drift

We’re at Rockingham taking part in a drift day with Falken Tyres. Unfortunately, it’s not all about driving British Leyland’s finest sideways, there are some grown-up cars to drive too… 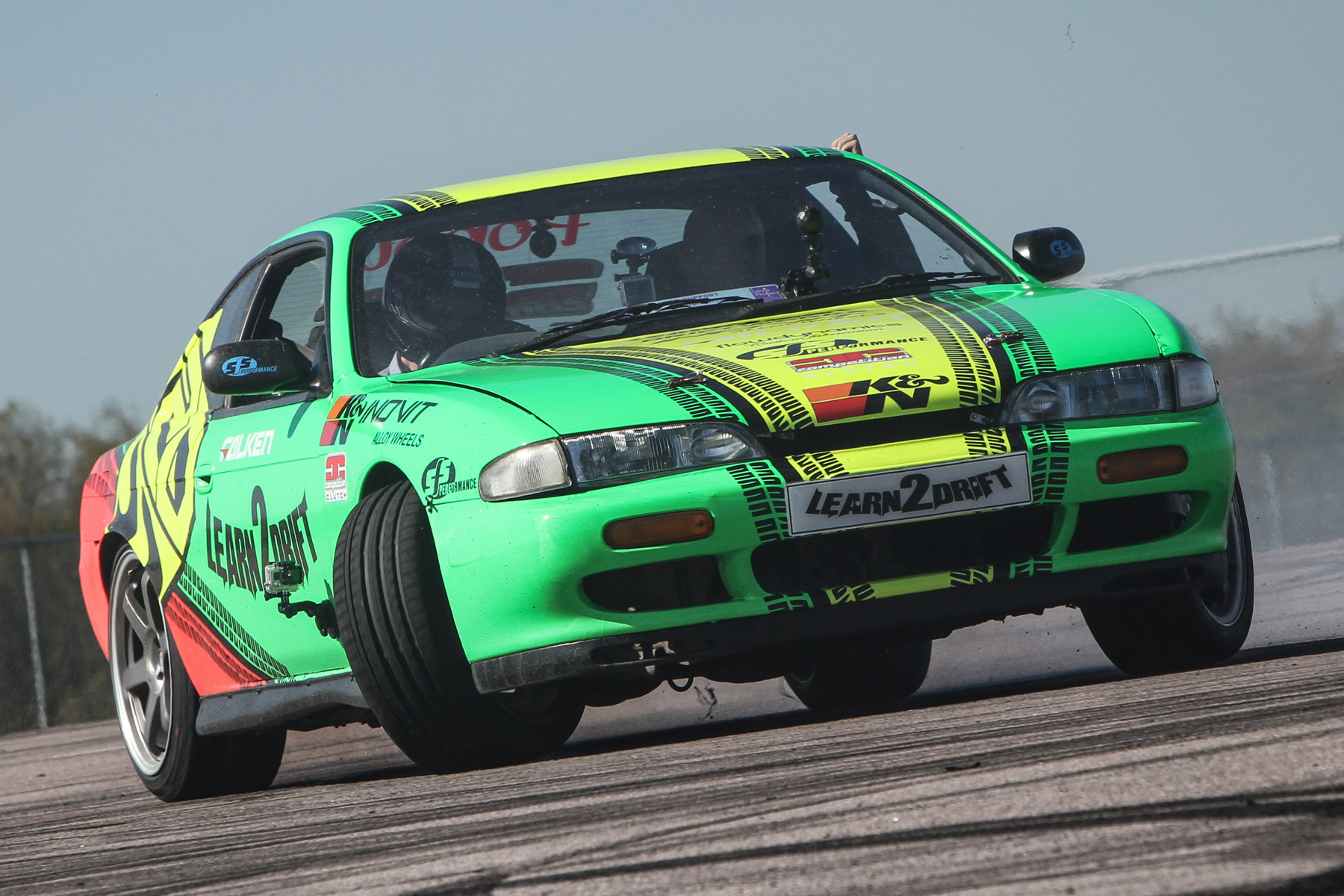 Such as this. A Nissan 200SX S14 used as a training car by Learn2Drift, ‘Betty’ has a 260hp turbocharged engine (the firm also has a 130hp naturally-aspirated model on fleet to break you in gently).

It’s clear why the 200SX is so popular in the drifting scene. Capable of holding extreme angles and taking serious abuse (despite 250,000 miles on the clock), it must be one of the most accessible ways into drifting. 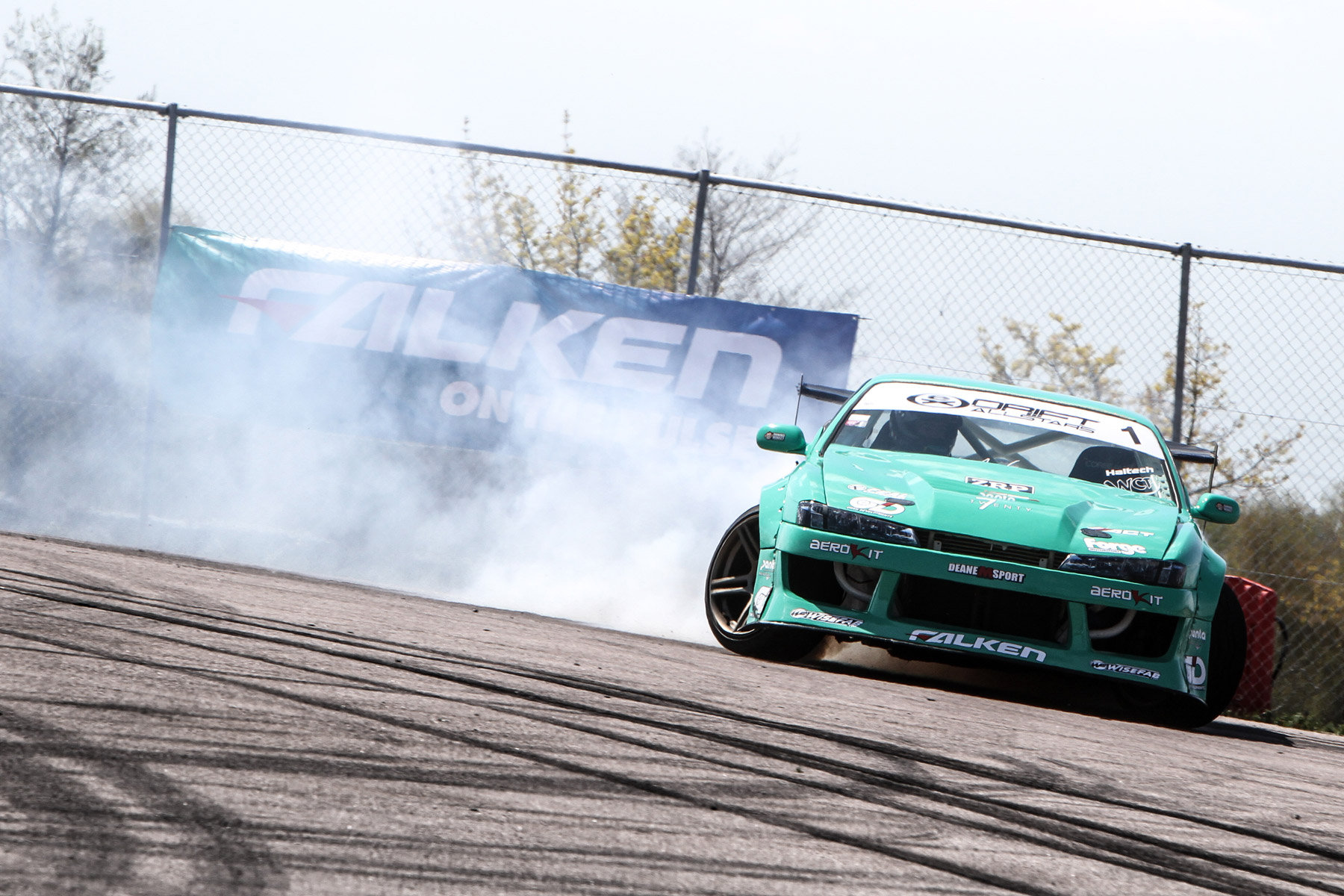 But it’s not just for beginners. James Deane is Falken Motorsport’s drift driver, and holds a number of championship titles under his belt – including 2015, 2014 and 2011 Drift Allstars European Champion and 2015, 2013 and 2012 Irish Drift Champion. 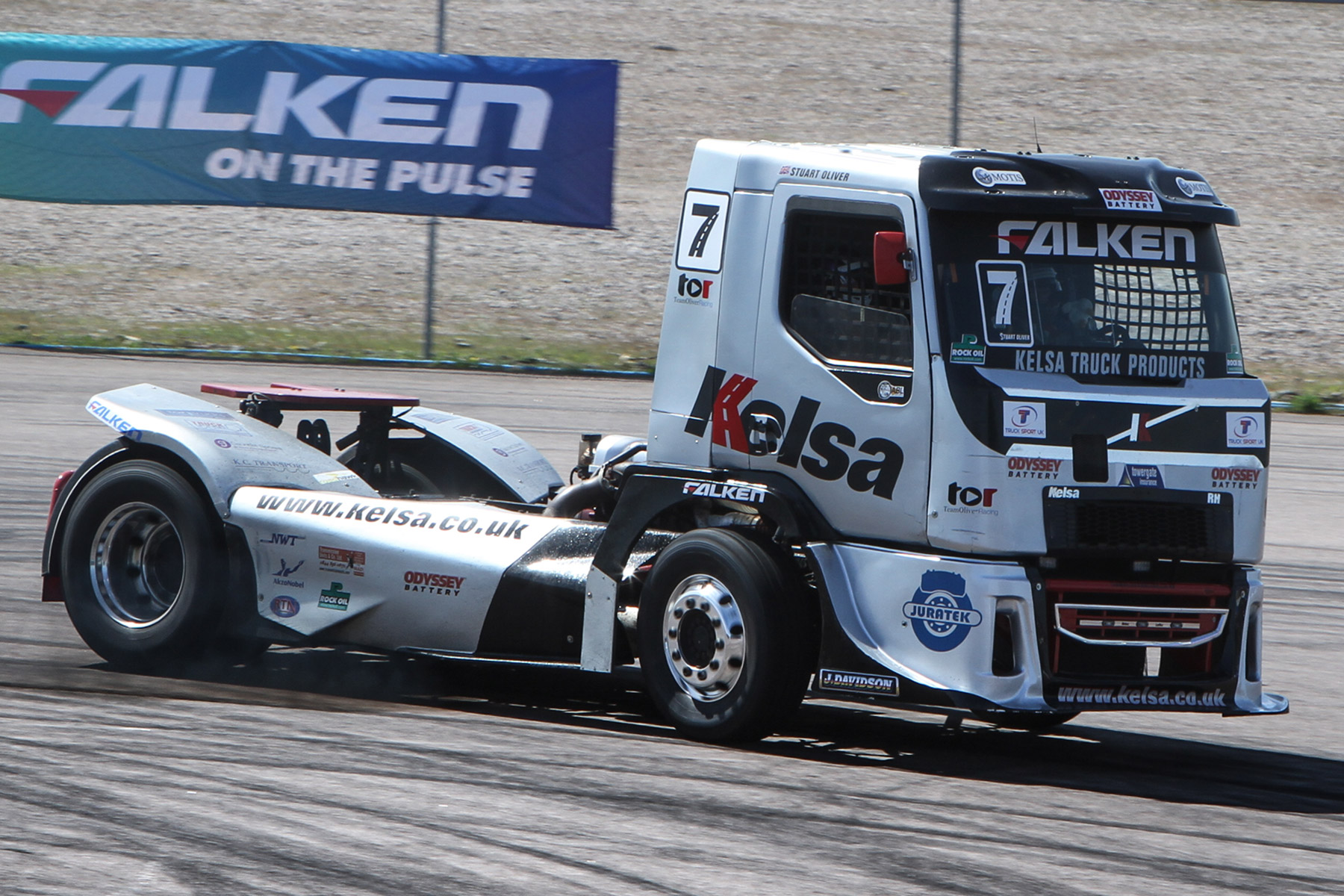 So back to the obscure stuff – and a 1,250hp Volvo RG13 racing truck driven by 10x British Truck Racing Champion Stuart Oliver.

Make no mistake, this is very different to a standard truck used for pounding our motorways lugging heavy loads. The inside feels more akin to a (very large) race car, with bucket seats and harnesses holding you in place.

Shod with Falken RI-128 tyres (no less than 315mm wide), the Volvo is surprisingly easy to get sideways – or, at least, Oliver makes it look that way. It’s a weird thing, looking out of the side window of a truck as it squeals around cones, but also really good fun. We’d recommend it.

We drive a Volvo police car – on a frozen...

We go sideways in Volvo's police-spec V90 on a frozen lake in Sweden. And we discover what makes it different to a normal car.
Read more
Features

Frank Stephenson’s car design CV stretches from the modern Mini to the McLaren P1. We ask about his career and what BMW has been drinking.
Read more
Features

Good things in small packages: the story of the Suzuki...