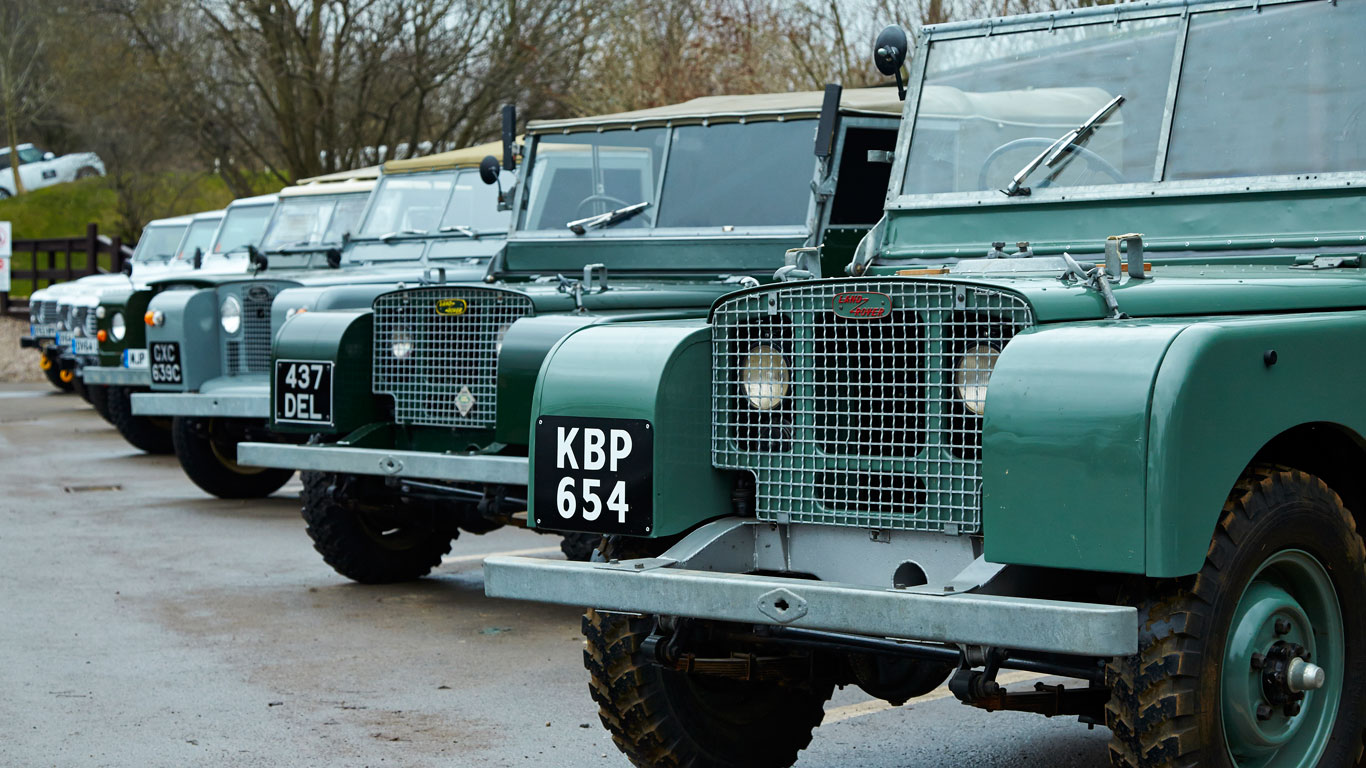 “What’s your oldest Land Rover memory?” asks our tour guide as he negotiates an eleventy-point-turn in the rare, 147-inch Defender. The group of journalists he’s carrying all have an interesting Land Rover story to tell – either memories of being driven in one as a youngster, going on a safari in one somewhere exotic or, in my case, learning to drive in one.

If you’ve ever driven a Defender, or one of its leaf-sprung Series predecessors, the chances are you’ll remember it well. They’re arguably the most old school vehicle you can still buy brand new today. We’ll explore the driving experience more later on, as we take a drive of a wonderful Series 3, but for now we’re heading to the Defender production line for a sneak peek of a new tour. 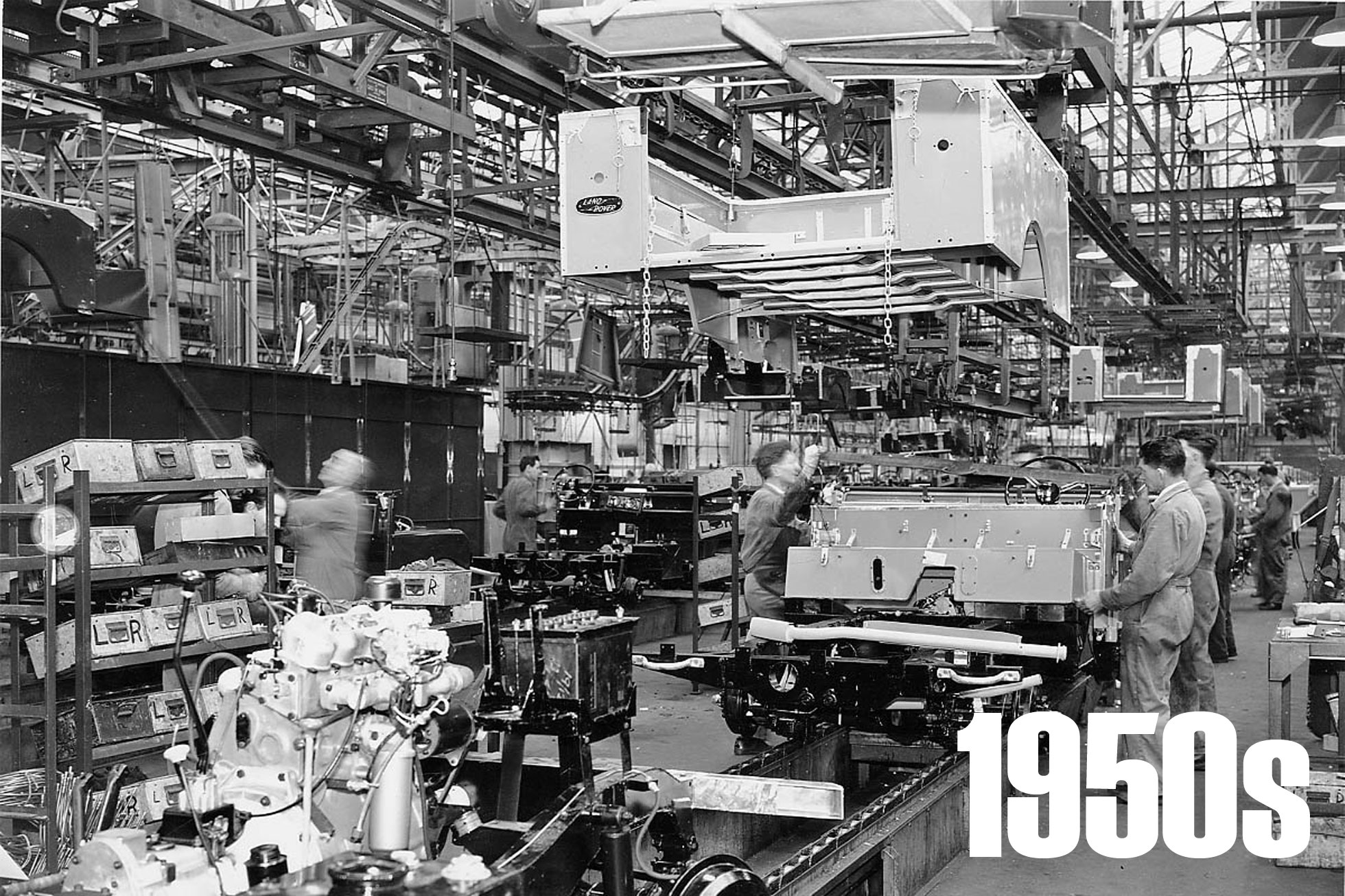 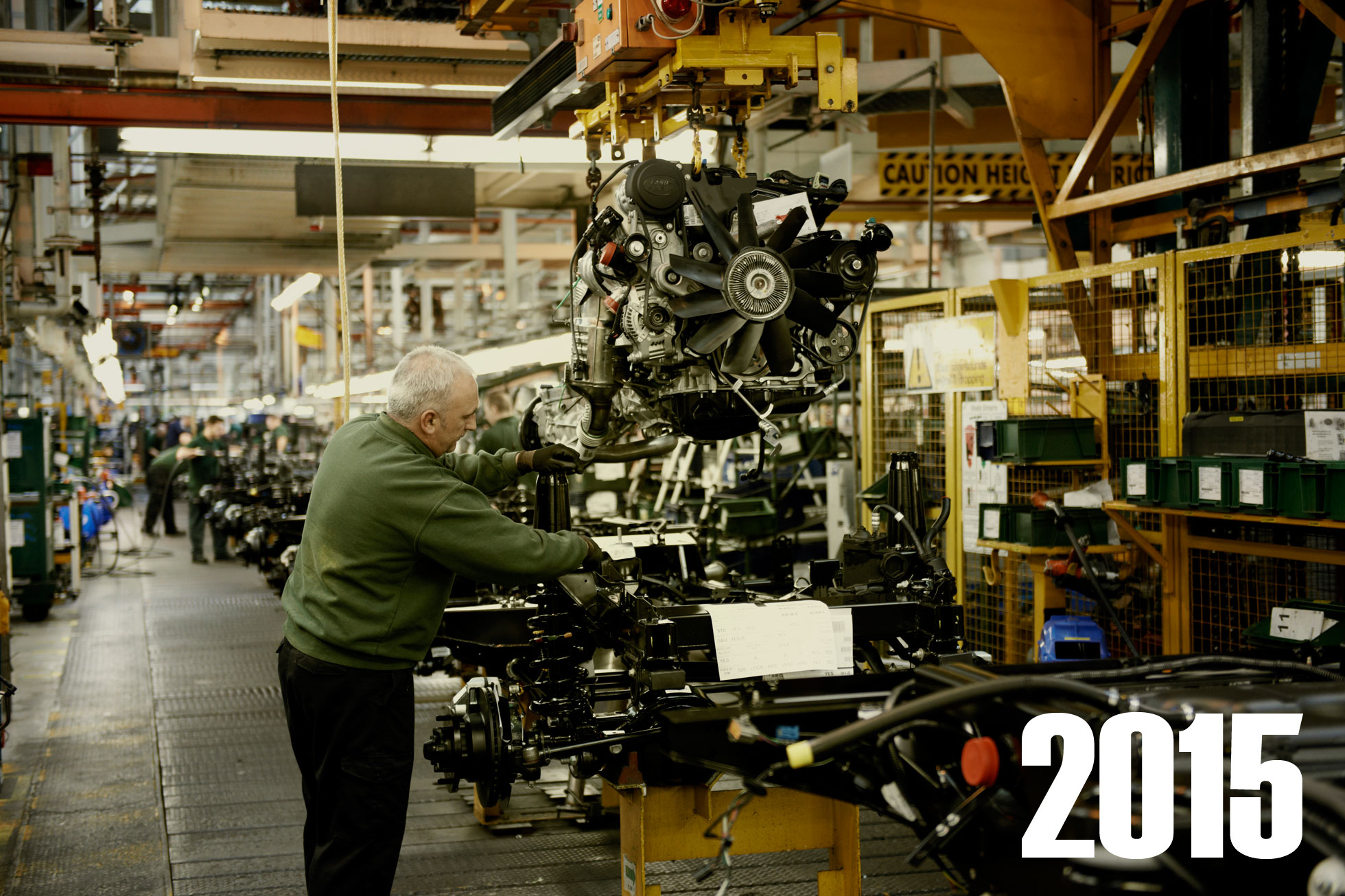 Production of the Defender

Compare and contrast the two pictures above. The one on top, from the early days of Series 1 production over 60 years ago – while the one below shows Defender production today.

Or at least, it does for the time being. Production of the Land Rover Defender is expected to cease in the UK later this year, after a production run of 67 years (albeit only 25 with the Defender badge). Killed off by pesky EU emission regulations, it’s rumoured that Land Rover will continue to build the Defender outside of Europe (probably India, home of owners Tata), but there’s set to be a real change for workers at Land Rover’s Solihull Lode Lane plant.

As you enter the historic buildings housing the Defender production line, you feel a real sense of pride radiating from workers. Some of them have worked their all their life. They love what they do.

We’re introduced to one chap, Mick. Mick is the third-generation in his family to work on the Defender production line. He’s one of around 450 people here, churning out around 500 Defenders every week. He’s a busy chap, but happily spares us a moment or two for a laugh and a joke. It’s a typically West Midlands light-hearted atmosphere – something you may have imagined to have found in other, less fortunate UK car factories over recent decades. I’d like to think so, anyway. 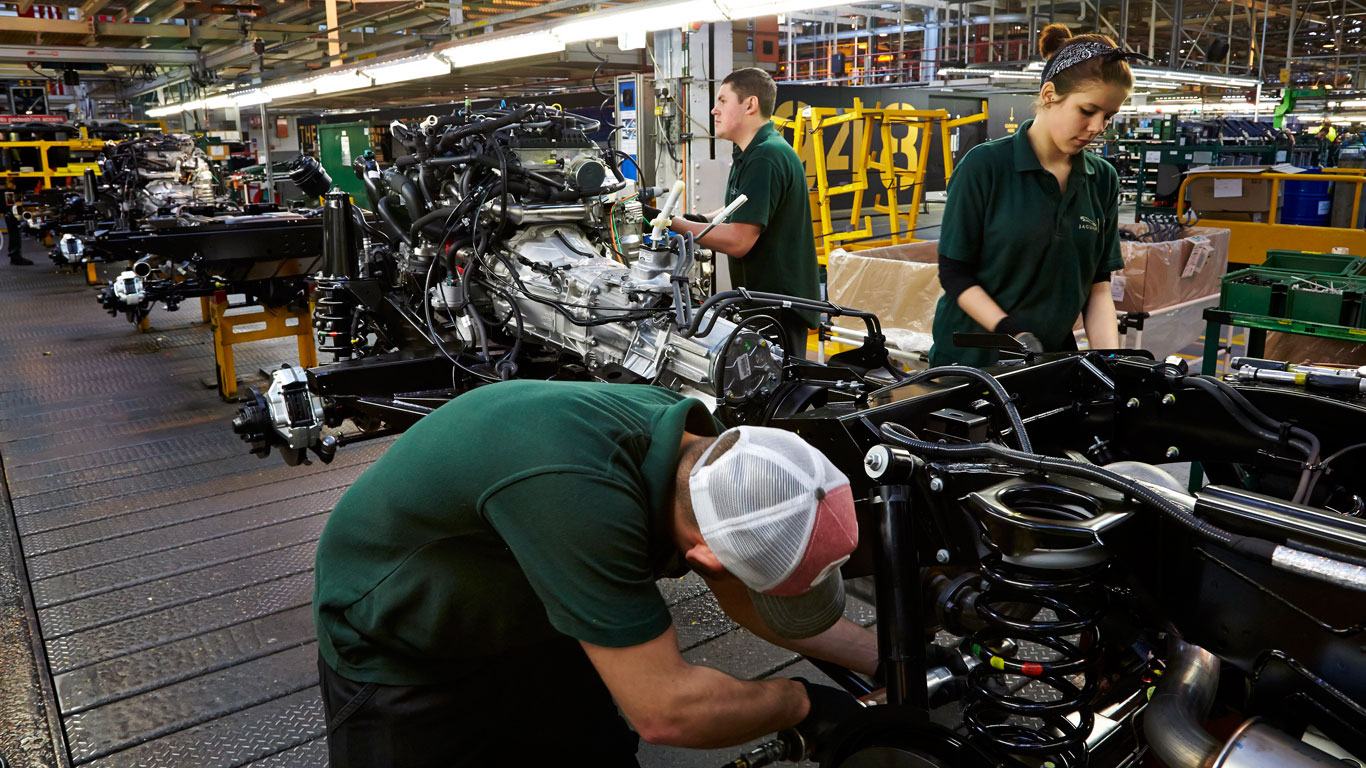 Yes, Mick will be losing the Defender production line as he knows it. But with Jaguar Land Rover boasting year after year of record breaking sales, he’ll be found a different role elsewhere. Perhaps on the line of the new Defender, set to be revealed in 2016.

Now is the time for a bit of nostalgia, however. We don our cow gowns (mine sporting the name of former chief Land Rover engineer Arthur Goddard), and enter a reproduction of the original 1948 Land Rover production line.

It’s not a realistic reproduction. In fact, it’s more of a timeline, or a “celebration line” as Land Rover calls it. It starts with a video of the Jeeps that Rover designer Maurice Wilks used as inspiration for the Series 1, along with the picture he drew in the sand at Anglesey’s Red Wharf Bay. 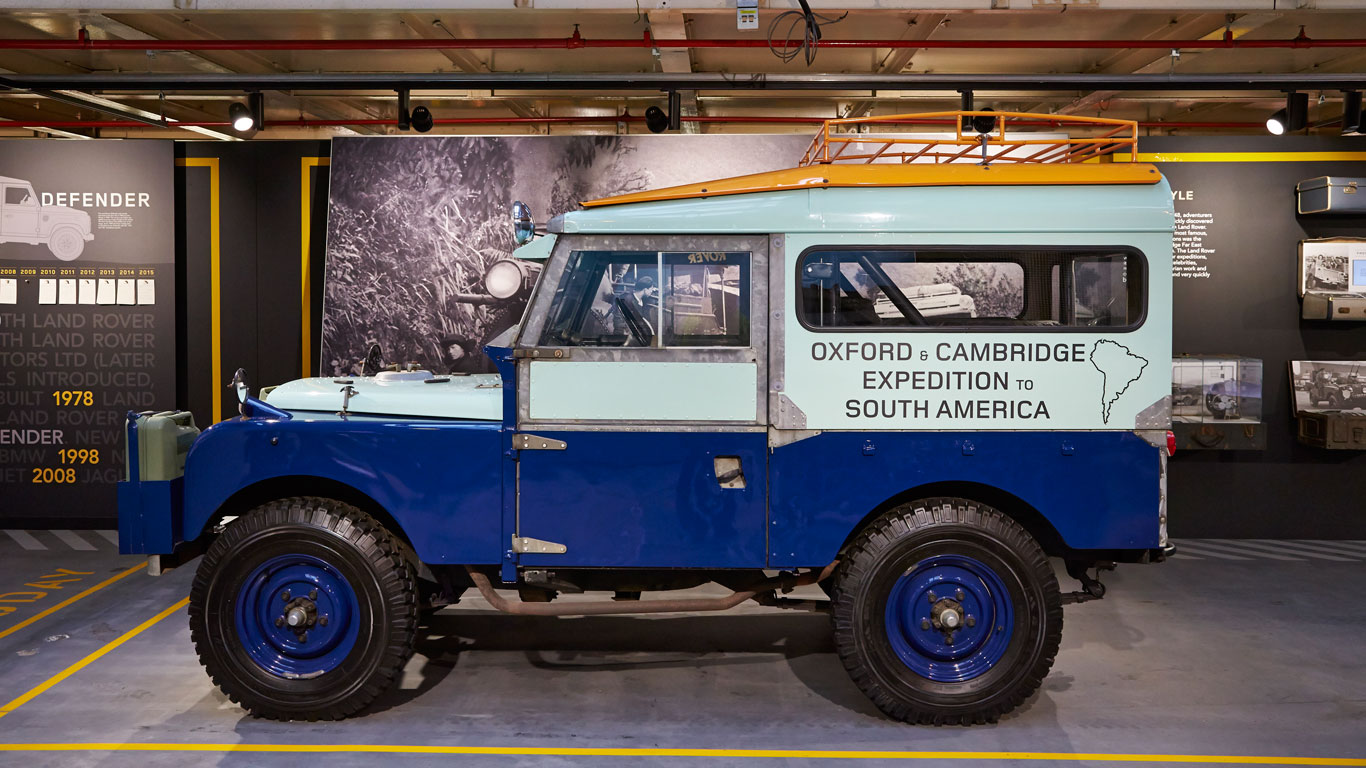 There’s plenty to excite the Land Rover nerd, however. Replica models of Series vehicles have been made using parts from independent specialist Dunsfold Land Rover – and they are a realistic reproduction. They include a stunning model of one of the Series 1s used in the 1957 Oxford and Cambridge South America expedition. The level of detail is incredible – it’s difficult to believe it’s not the actual vehicle.

But then, Mr Land Rover himself, Roger Crathorne, came out of retirement to oversee the project. What would you expect but for it to be spot on?

We end the tour by writing down our own Land Rover memories to add to a timeline spanning 67 years. It’s fascinating reading what the British four-wheel drive manufacturer means to so many people. For me, it’s learning to drive in a battered old 1998 Freelander. An experience that, I’m sure, was a lot easier than what I’m going to do next… 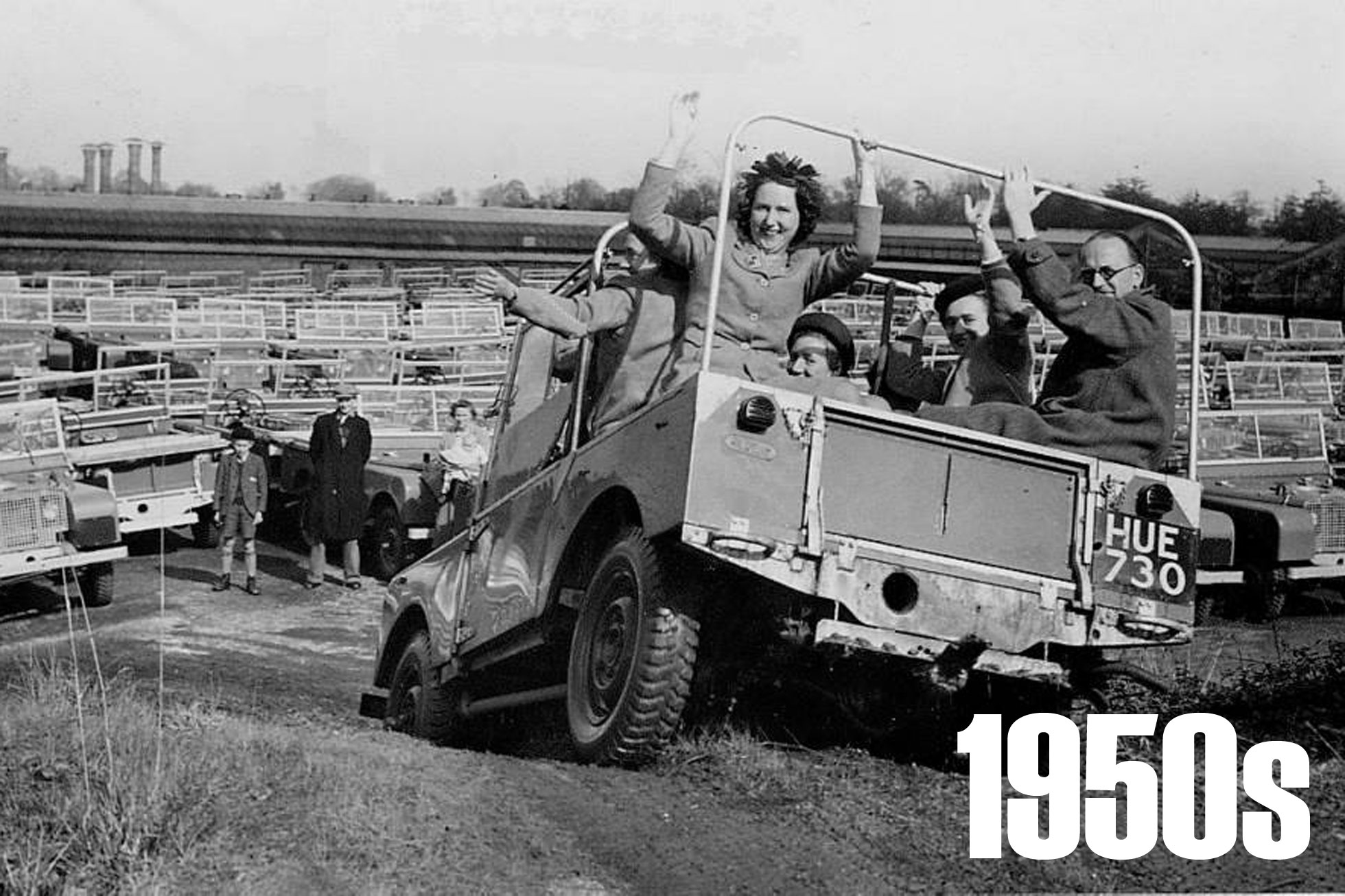 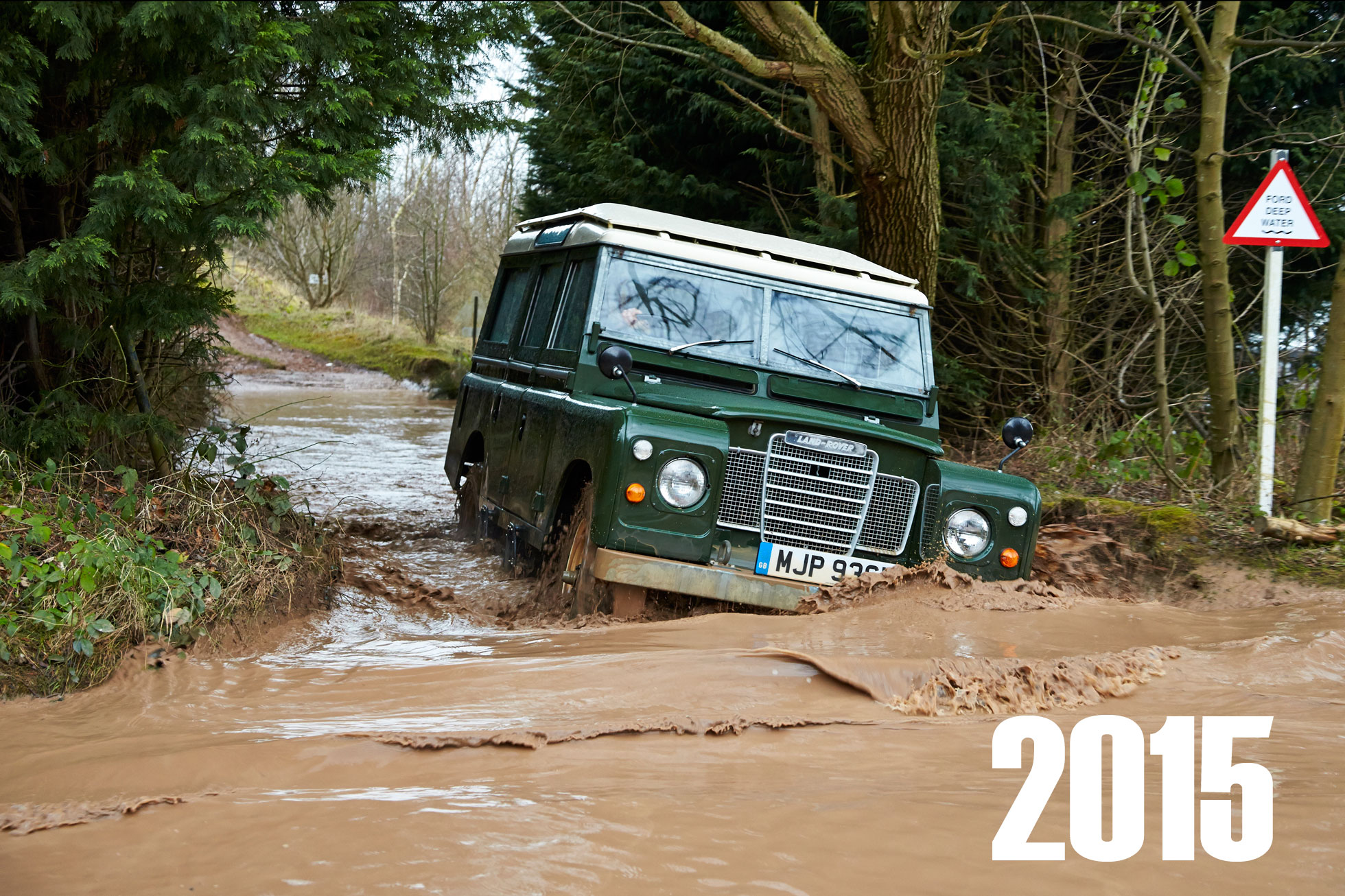 Driving a Series 3 off road at Solihull

I flick the key. The 1980 Land Rover Series 3 springs to life. And then dies. Of course it does – it’s got none of that fancy fuel injection that we’re so used to today. “Give it some revs,” says my instructor, “and we’ll give it some choke too.”

On my second attempt the 2.25-litre petrol engine starts, and stays started. Now to get the thing to move. Into gear and… I nearly reverse the mint condition Land Rover (part of the Heritage Motor Centre’s collection) into a fence. “Yeah, the gearchange is like stirring porridge.” I have another go at finding first and… hurrah, we’re away.

What follows is a steep learning curve into finding gears in a Series Land Rover. At 109-inches long with no power steering and a turning circle of a bus, it takes a lot of shunts to negotiate the car park of Land Rover Experience at Solihull. I’m ready for a break before we even reach the off road site.

We soon make it however, with no cars hurt and the Series 3 still looking its best. I engage low range (pull a lever and clonk – no turning of dials and waiting for electronic systems like in a modern Land Rover), and we’re away. 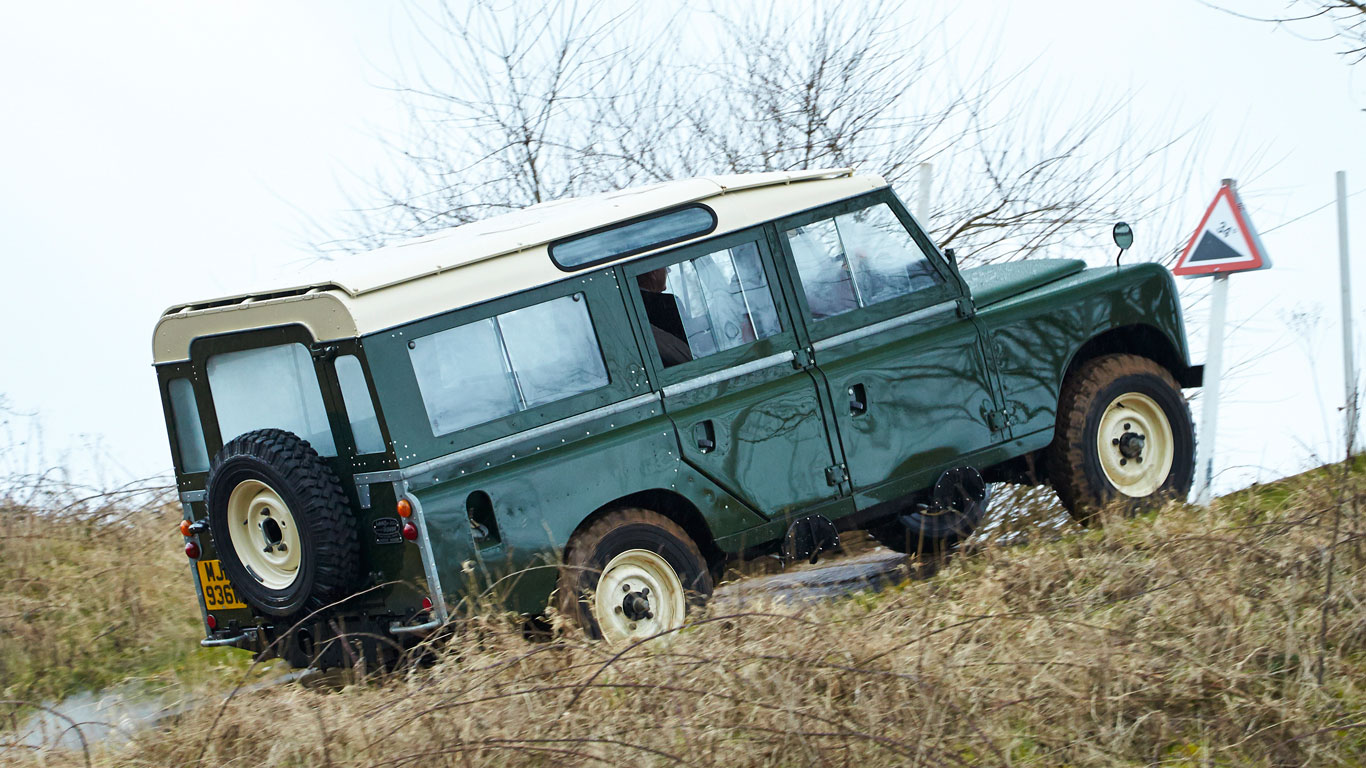 Solihull is not your typical location for an off road site. I’ve previously visited Land Rover Experience centres at Eastnor Castle in Herefordshire and Bala in North Wales. They’re much grander, more rural affairs, but this feels special.

Part of the course follows the route of the original off-road test track, built over air raid shelters left from wartime. When it was opened in 1949, Land Rover held an open day and invited local families to visit the site and have passenger rides in their new vehicles. In a time before health and safety, kids and parents piled into the Land Rovers (as many as could fit) and great fun was had as they were chucked around while the driver went up and down hills and through water.

Before this, the recreational use of off-road vehicles had never been really explored. Land Rovers had been designed with a purpose in mind – not for simply having fun. But today, as I’m discovering, taking a Land Rover of yesteryear off road is great fun.

Fun, if a little bit damaging to your ego. Point a modern Land Rover (or even many modern cars) up a steep slope, and as soon as it detects that grip is being lost, the traction control will kick in and send power to the wheels that need it to get you up that hill. Run out of momentum and get stranded halfway up? Hill hold assist will apply the brakes and keep you in position while you work out your next move.

Not this 1980 Series 3. I’ve ran out of momentum. All four wheels are spinning. “More gas!” shouts my instructor. More gas isn’t helping. I start to slide backwards. “On the brakes!” he shouts. I’m on the brakes. Reverse momentum is now building, and the ancient drum brakes aren’t going to hold it here.

I slide down, backwards, unceremoniously with the wheels locked. Of course, seasoned off-roaders will tell you that you need to whack it into reverse and take your feet off the pedals in this situation. But for an amateur like me, your brain goes a little bit dead as you try your best to keep the Land Rover sliding in a straight line.

Still, no harm done. With more momentum (and wrestling the steering wheel from side to side in a bid to find grip) on the second attempt, we reach the top of the hill. Worried that I’ve given this lovely old Land Rover enough abuse, I expect the instructor to suggest we head back to our base. 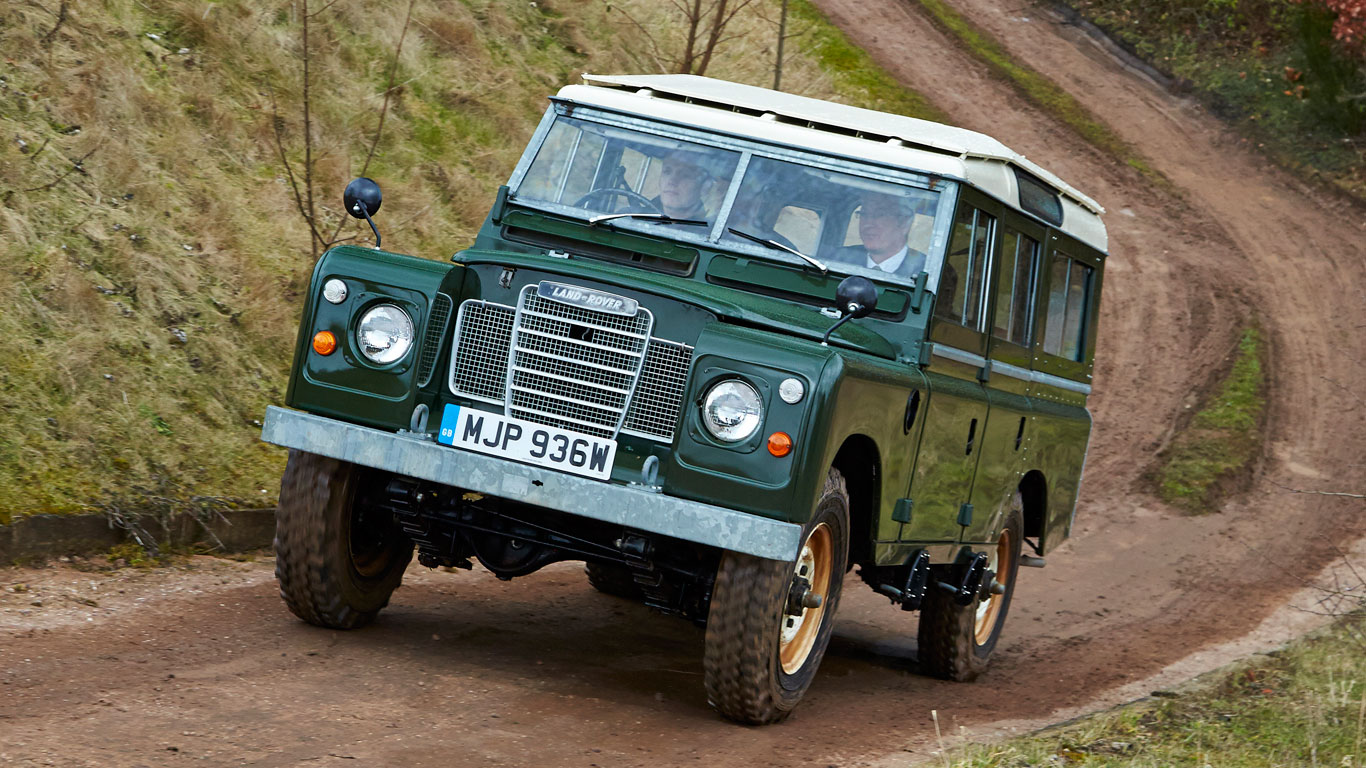 But no. “Shall we go and find some muddy water to play in?” he asks. Previous off-road experience tells me that I like muddy water. Muddy water is fun. It’s not as scary as steep slopes. Unless you’re fording a deep river, it’s unlikely to seriously hurt you.

I’m clearly too mechanically sympathetic for this off-roading in a classic Land Rover business, however. We enter the water at a little over a crawl. I go on the accelerator, attempting to push a bow wave in front and keep water away from the radiator, proving that I’m not a total numpty when it comes to off-road driving, but it’s too late. Momentum, again, has been lost – and I quite literally get a sinking feeling.

Thoughts of an embarrassing recovery emerge. We’re at Land Rover’s factory – there isn’t a shortage of vehicles to give me a tug out. But what about attaching the rope? I got us stuck, I’ll be the one expected to crawl through the muddy water to find the front towing eye, and I’ve got my best chinos on.

It’s all an overreaction. I turn the key to start it up (worryingly, it stalled as we sank). I give it a load of revs and hear the water bubbling around the exhaust. I select reverse (intentionally this time), give is some gas and we’re free. Backwards.

Now to try again. I’m holding no prisoners this time. Second gear, low range, and a bootful of gas. I won’t be blamed for cocking it up this time, and I will splash that smirking photographer. 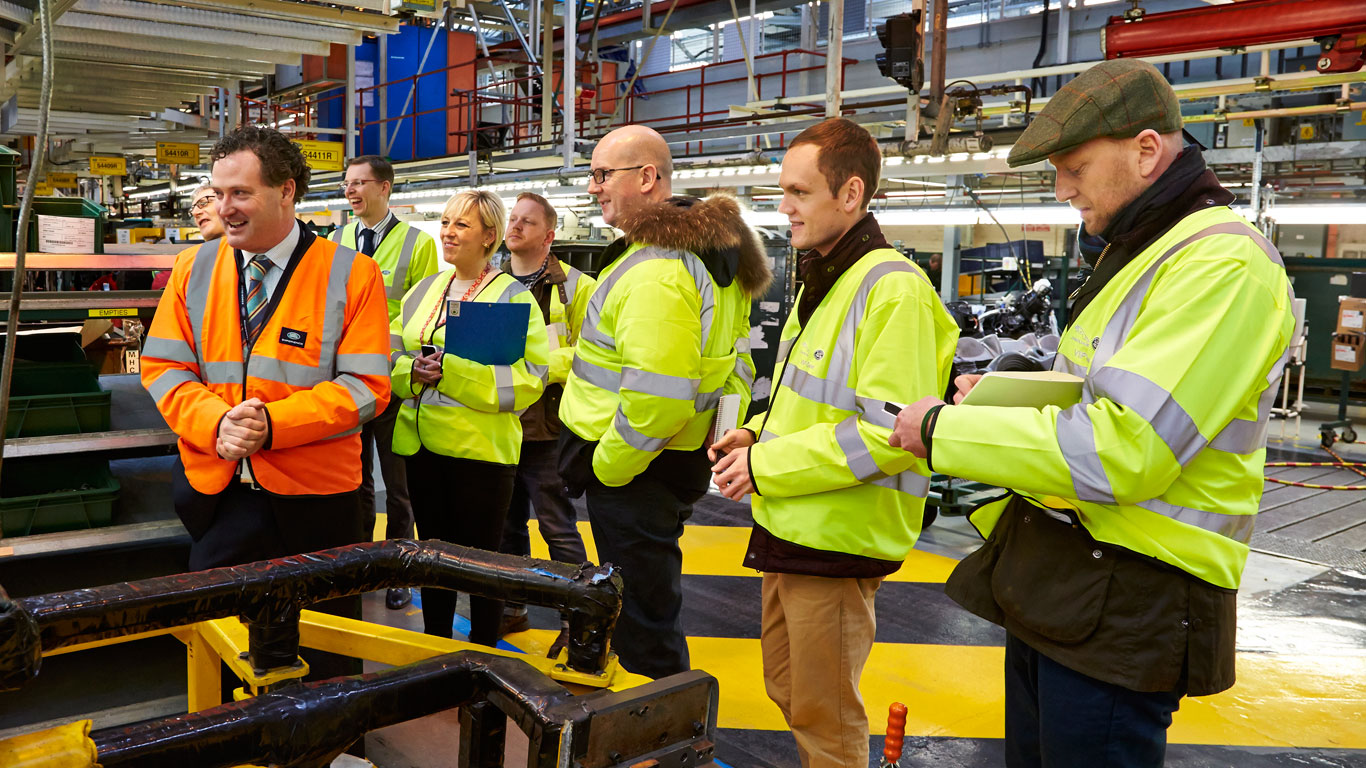 You don’t need to be a Land Rover obsessive to want to visit the Solihull plant. You needn’t even be a car enthusiast. It’s genuinely part of Britain’s heritage, and anyone with the slightest interest should take the opportunity to see the Defender being built while they still can.

For £45 you can visit Solihull and spend an enjoyable three hours being shown behind the scenes, and visit the same celebration line that we did. Over 20,000 visitors are expected before production of the Defender ends later this year. Do it, while you still can.