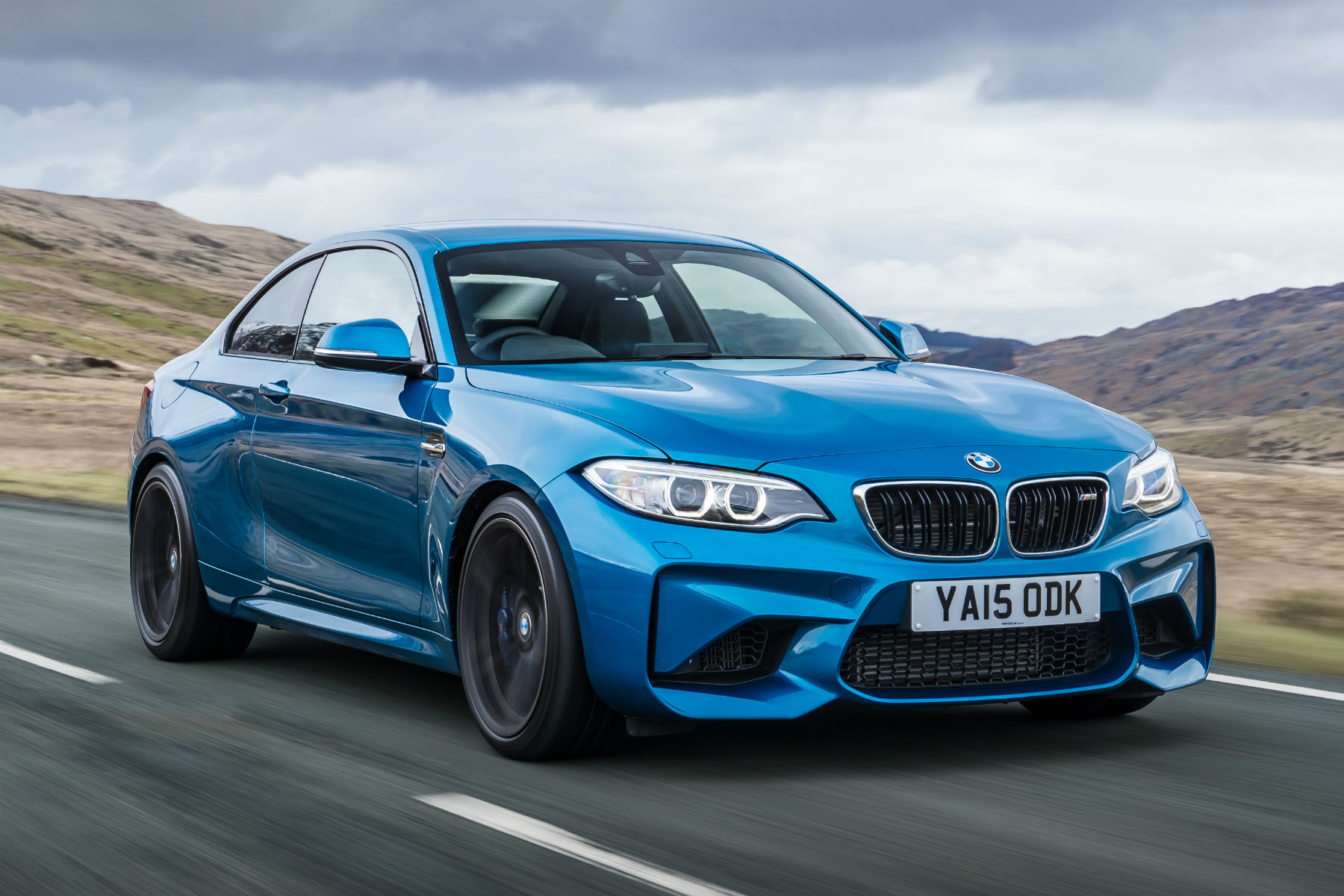 The smallest fully-fledged M-car looks like a pumped-up M235i, but much of its hardware comes from the larger M3 and M4. A 3.0-litre straight-six turbo petrol engine sends 370hp to the rear wheels via a manual or DCT dual-clutch automatic gearbox.

This is ‘a car for purists’, says BMW – hence the traditional front-engine, rear-wheel-drive format. Yet the M2 is that rare thing: a car with no direct rivals.

BMW usually squares up to fellow Germans, Audi and Mercedes-Benz. But its competitors at this price-point – the RS3 Sportback and A45 AMG – are four-wheel-drive hot hatchbacks, not rear-driven coupes. The three cars are comparable when it comes to price and performance; all cost around £40k and hit 62mph in less than 4.5 seconds. But there the similarities end.

Time to search for the hero inside myself… pic.twitter.com/C1KtySQxD7

In fact, the M2 is conceptually closer to another fast German: the Porsche Cayman. Porsche’s compact coupe is a benchmark for driving dynamics and one of our favourite cars full-stop. However, it gives away two seats to the more practical BMW – and in new ‘718 Cayman’ guise, two engine cylinders as well.

Like a hormone-pumped Bavarian bodybuilder, the M2 looks almost as wide as it is long. Bulging wings (80mm wider at the rear) are stretched over 19-inch alloys, giving the car a squat, purposeful stance.

At the front, a square-jawed bumper houses enlarged ducts that divert air into the wheelarches and along the sides of the car. There’s a splash of chrome on the front grille, plus the obligatory blue, red and purple ‘M2’ badge.  Moving rearwards, you’ll find shapely side skirts, a steel roof (the M3’s is carbonfibre) and a small boot spoiler. Four shotgun exhausts confirm – if there was any doubt – that this is no bodykitted 220d.

Although relatively subtle, the body mods reduce drag by 5% and high-speed lift by 35% versus the 2 Series Coupe. They also give the M2 the visual clout to match its no-punches-pulled performance. The mouth to match its trousers, if you will.

It makes an M235i seem slow

Spec your M2 with a six-speed manual gearbox and – with some deft cog-swapping – you’ll hit 62mph in 4.5 seconds. That’s 0.5 seconds swifter than an M235i and just 0.2 seconds behind the manual M4. Splash out £2,500 on the seven-speed DCT semi-automatic gearbox and that figure is cut to just 4.3 seconds.

A top speed of 155mph is fast enough for most, but BMW also offers a optional Driver’s Package, which removes the speed limiter, increasing the VMax to 168mph. If you regularly commute on the Autobahn at 3am, it’s a must-have.

Tackled some mountain roads in this Sapphire Black M2 earlier – these pics taken during a brief break in the rain… pic.twitter.com/84SM1M3V7W

I suppose you’ll be wanting a Nurburgring lap time, too? The M2 circumnavigates Germany’s most notorious racetrack in seven minutes and 58 seconds, a modest 12 seconds behind big-brother M3. As we’ll discover, it’s the way this car goes around corners that makes it genuinely special.

Or should I say the heaven of it? Screaming up Spanish mountain switchbacks, feeling the tyres squirm and tail twitch as we exit each hairpin, is an experience I will remember for a long time. Yes, it has a turbocharger (doesn’t everything these days?), but this is a pure, undiluted M-car – and all the better for it.

Key to the M2’s impressive agility is near-perfect 51% front, 49% rear weight distribution. Its electric power steering is light around town, but gets heavier as speed increases, offering plenty of feedback through a chunky M-badged wheel. The slick manual gearbox blips the throttle automatically for smoother downchanges (tell friends it’s your expert heel-and-toe technique), while the DCT ’box is excellent, too – certainly one of the quickest and most intuitive automatics available.

Even on the road, you can explore the limits of the M2 in relative safety. For a chassis with a short wheelbase and 370hp at the rear tyres, it’s remarkably benign. It turns in with eager immediacy, and you can adjust your cornering line using the throttle without undue fear of the car biting back.

The engine is hushed at low revs, but builds to a classy straight-six roar as the needle surges towards 7,000rpm. There’s ample mid-range grunt for overtaking and, unlike some turbocharged engines, it doesn’t run out of puff near the redline.

It needs handling with care in the wet, though

Part-way through our test-drive of the M2, the heavens open and the smoothly-surfaced roads suddenly feel like they’re coated in Teflon. You know what they say about the rain in Spain…

In these conditions, the M2 needs handling with care. A tail-happy car at the best of times, it’s very drifty indeed on damp Tarmac. Only a Toyota GT86 feels so eager to go sideways – and that has 170 fewer horses. Thankfully, unless you neck a Brave Pill and select Sport Plus mode, the DSC stability control does a sterling job of keeping you on-track. It allows a small degree of slip, but the safety net is certainly there.

Traction is perhaps more of an issue. The Active M Differential juggles torque between the rear tyres, giving impressive traction out of corners in the dry. In the wet, though, the M2 struggles to put all its power down. You need a delicate right foot to keep the wheels from spinning.

As performance cars go, the M2 is pretty practical

Sadly, few people apart from car journalists regularly drive on deserted mountain roads. They’re more likely to lap the M25 than the Nurburgring. So what’s the M2 like in this ‘real world’ I keep hearing about?

Well, it’s more practical than most driver-focused cars, with comfortable front seats, a sculpted rear bench that accommodates two adults (at a squeeze) and a 390-litre boot (about the same as a VW Golf). BMW’s Professional Navigation package is standard, along with leather trim and super-bright xenon headlights. Shame the 2 Series interior doesn’t feel worthy of a £40k+ car.

The ride is on the firm side of comfortable, and the exhaust is too noisy in Sport mode on the motorway. Official fuel economy in the low-to-mid 30s won’t win any plaudits from Greenpeace either, but is what about you’d expect for a car with this level of go. We saw closer to 20mpg on our ‘spirited’ test-drive, though…

It has a ‘smoky burnout’ mode

If that all sounds a bit sensible, don’t worry; the M2’s ‘smoky burnout’ function is evidence that Germans really do have a sense of humour. Available on M2s with the DCT auto gearbox, it allows for full-bore, tyre-shredding getaways. If you so feel the need.

On cars with a manual ‘box, you can replicate this effect by dumping the clutch, of course. And the retro six-speeder would certainly be our choice. It adds an extra layer of involvement, and saves you £2,500 for your trouble. A quarter of customers have chosen a manual so far – much higher than in the M3 and M4. And BMW expects that figure to rise to 40% over time.

The M2 is well-equipped, particularly for a BMW. So your other big choice is colour. There are four shades available: Long Beach Blue, Alpine White, Black Sapphire and Mineral Grey. For us (and around 50% of M2 buyers), it has to be the blue – it looked stunning in the Spanish sunshine.

After several disappointments, the latest M3 and M4 among them, M GmbH has come up trumps. The new M2 is fantastic – a car dominated by its superb chassis, such as we haven’t seen since the 2000 (E46) M3. Finally, a BMW that feels worth of the old ‘ultimate driving machine’ tagline.

Enthusiasts are already queueing up, chequebooks in hand, so you’ll probably wait until 2017 if you order now. However, BMW plans a generous production run of 15,000 cars (with 1,900 allocated for the UK). That’s good news if you want one, although less so in terms of the car’s long-term value.

A few classic heroes at the BMW M2 launch in Malaga.

Sadly, they are for display purposes only. pic.twitter.com/PwE92OtC4w

Let’s go back where we started by talking about the M2’s predecessor: the 1 Series M Coupe. With only 6,000 built, prices are higher now than when the car was new in 2011. The 15,000-strong M2 is unlikely to appreciate quite so readily, but hold on long enough and it’s a dead-cert future classic.

More practical than a Cayman