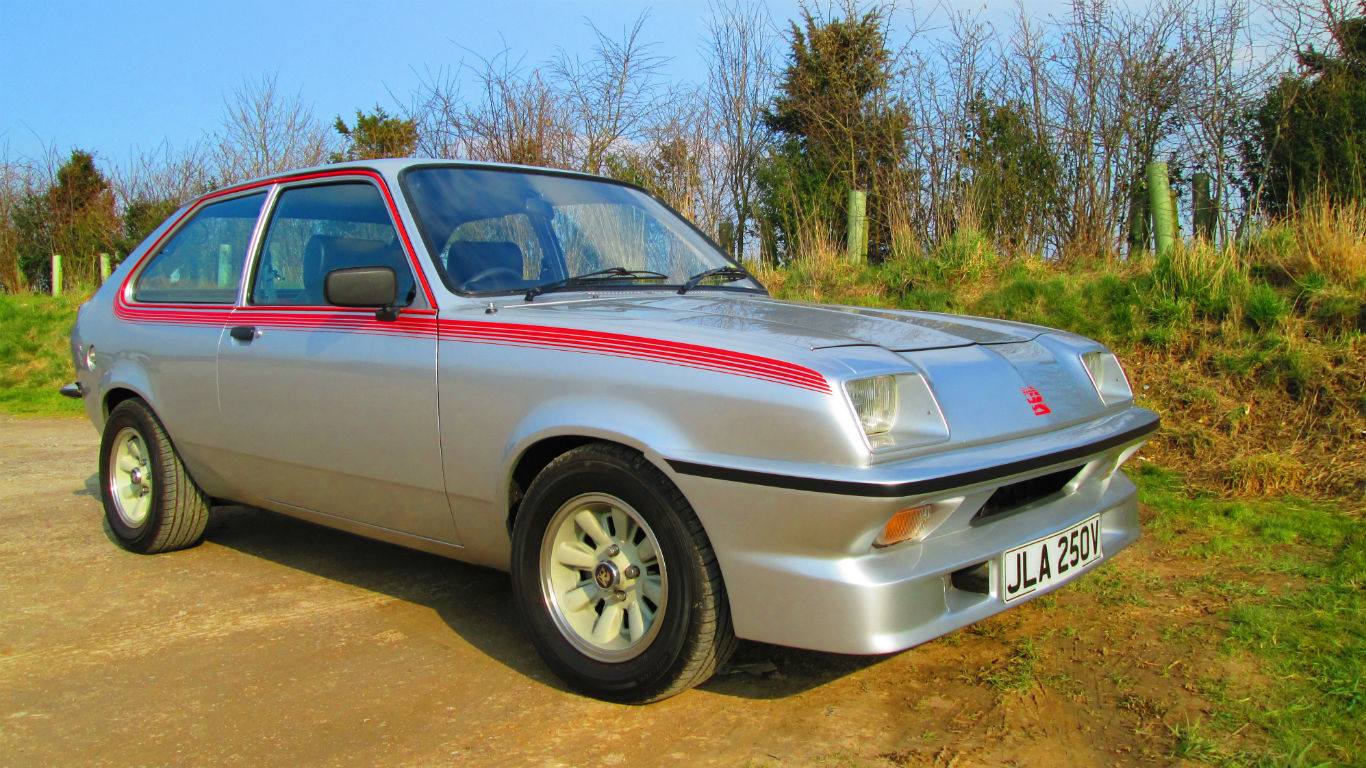 Say ‘homologation’ to a non-petrolhead and they’ll probably reply ‘bless you’ and pass the Kleenex. Yet this process of building road-going versions of racing cars has produced some of the greatest driving machines ever. Ferrari 250 GTO, Lancia Delta Integrale, BMW E30 M3, Mitsubishi Lancer Evolution, Ford Escort RS Cosworth… the list goes on.

Bred for rallying, then offered for sale to the public in 1978, the Vauxhall Chevette HS is less well-known than most of its contemporaries. Make no mistake, though, this raucous hot hatchback is a bona fide homologation hero.

We borrowed Vauxhall’s immaculate heritage HS for a blast through the Hertfordshire countryside. How does it stack up today – and should you consider buying one?

The Chevette HS was born in 1976, the same year as Volkswagen launched its iconic Golf GTI. Contrary to popular perception, the Golf wasn’t the first hot hatch; the Renault 5 Gordini (5 Alpine in Europe) actually beat it to the title. Later turbocharged versions of the 5 upped the ante in terms of performance, and – like the Chevette – competed in rallying.

Rallying pedigree, however, doesn’t come any finer than the Mk2 Ford Escort – probably the most successful rally car of all time. The Escort RS2000 was the Vauxhall’s closest rival on the road. Lastly, we shouldn’t forget the Talbot Sunbeam Lotus. With 150hp from its Lotus twin-cam engine, it’s the only car here with more power than the 137hp Chevette.

The Chevette’s 2.3-litre four was Vauxhall’s first 16-valve engine, and it drives the rear wheels through a five-speed Getrag gearbox. In true homologation style, first gear is on a dog-leg (where you’d often find reverse) – the idea being that competition cars only need first once, at the start of the race.

This isn’t a car that likes going slowly. There’s that awkward dog-leg first gear for starters, and the peaky 16v engine doesn’t really wake up until you get past 4,000rpm. Luckily, very short gear ratios (just 19mph per 1,000rpm in fifth) mean it doesn’t take long to get there.

The dished steering wheel constantly writhes in your hands, telegraphing everything about what the front wheels are doing. And the Chevette changes direction with impressive agility. It will understeer if pushed hard, but lurid oversteer is never more than an injudicious prod of the throttle away. This is a rear-wheel-drive hot hatch, remember?

Like all old cars, the Vauxhall’s brakes take some getting used to. The front discs look tiny, while the rear wheels use old-fashioned drums.

Despite being the forerunner of the Astra, the Chevette is shorter and narrower than a current Corsa. So it feels wonderfully compact, with excellent visibility thanks to stick-thin roof pillars. Best not to think about the implications for crash-safety…

The highly-strung Chevette probably won’t be as reliable as, say, a Mk1 Volkswagen Golf GTI. With only 450 made – the HS was only sold in the UK, there was never an Opel-badged version – finding parts could be trickier, too.

Vauxhall quotes fuel economy of between 18.3mpg and 25.5mpg. That’s pretty poor for a car that weighs just 1,014kg. But few, if any, HS owners will drive their cars every day.

Which brings us neatly to our next question. Yes, you could drive a Chevette HS every day, but it would be a shame to.

This is a car for sunny Sunday mornings, not Friday-night commuting drudgery. Its heavy, unassisted steering is a (literal) pain around town, and its frantic engine will give you tinnitus on a long motorway run. You can have too much of a good thing.

Only 450 HS Chevettes were made, and DVLA data indicates that just 108 are left in the UK. Of those, only 31 are actually registered for road use.

So actually finding an HS will be your biggest problem, and prices are very much dependant on condition. You may find a ratty example for four figures, while a tidy HS with 68,000 miles on the clock was recently advertised for £16,000.

The good news is that, despite being rarer than the equivalent Escort RS2000, the Vauxhall is considerably cheaper.

The mortal enemy of any car from the 1970s is rust. Look carefully around the wheelarches, door-bottoms and the scuttle panels, using a magnet to check for filler.

Exterior and interior trim may be cosmetic, but missing or damaged parts may be near-impossible to replace. We doubt your local Vauxhall dealer keeps a spare roll of tartan seat trim in stock. Remember, originality is key when it comes to classic cars.

Mechanical issues should be simpler and cheaper to fix (no electronic systems to worry about here), but check the engine hasn’t been pre-warmed before you drive it and look for smoke from the exhaust on start-up.

There’s something very special about homologation cars. Forged in the heat of competition, they seem slightly feral – like they’ve only been partially tamed for the road. They’re usually fast, rare and cool-looking, too.

The Chevette HS ticks all those boxes. It looks brilliant – in a Max-Power-meets-the-1970s kind of way – and it’s riotously good fun to drive. Also, while you’ll struggle to find an E30 M3 for less than £30,000, a nice HS costs less than half as much. As a classic car you can enjoy driving, it’s definitely worth a look.

The Chevette was part of the Dealer Team Vauxhall (DTV) programme – a race/rally operation that was backed by a selection of London Vauxhall dealers, rather than the factory itself.

Other Vauxhalls raced by DTV were the Victor, Magnum, Viva and Firenza (above). Famous drivers for the team included Pentti Airikkala and Jimmy McRae (father of Colin).