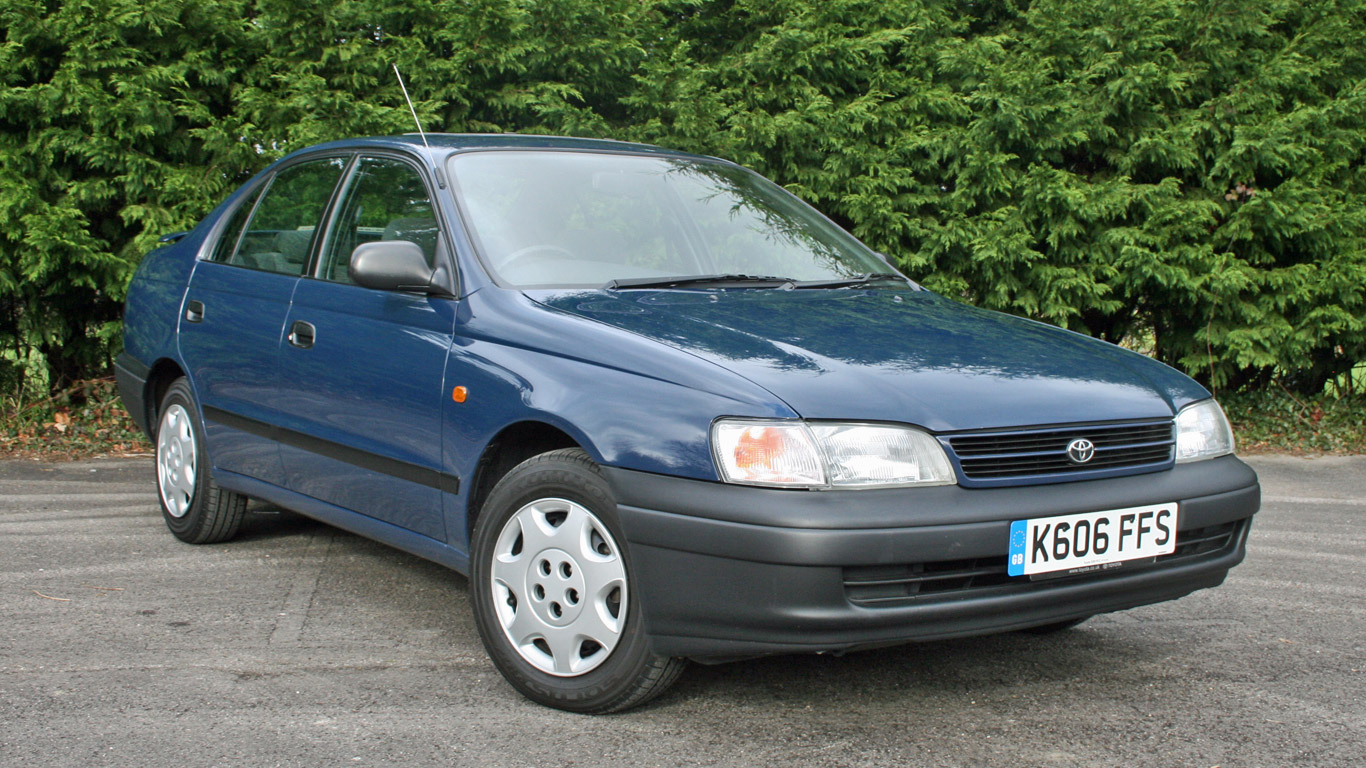 If you’ve never driven a Toyota Carina E, there’s a good chance you’ve been a passenger in one – probably after several pints and a large kebab. Yes, during the 1990s, this British-built saloon faithfully plied its trade outside train stations and nightclubs as one of UK’s favourite minicabs.

While a penchant for private-hire doesn’t bestow much glamour, taxi drivers know a reliable, affordable and easy-to-drive car when they see it. And those same virtues still apply to the Carina E today.

This immaculate 22,000-mile example belongs to Toyota UK’s heritage fleet. Of all our Retro Road Tests so far, it’s perhaps the car that surprised us most…

The Carina E was launched in 1993 – the same year as the curvaceous new Mondeo. Ford’s first ‘world car’ offers more engaging handling, but isn’t as robust as the Toyota.

The Vauxhall Cavalier, meanwhile, was nearing the end of its production life in 1993. Prices are firmly in banger territory today – but we still wouldn’t recommend it. A better bet is the Honda Accord, which combines Japanese reliability with a dash of style.

Looking back, perhaps the most significant car here is the BMW 3 Series. It was more expensive than a Carina E – and remains so second-hand – but would eventually go on to outsell the Mondeo. The notional divide between ‘mainstream’ and ‘premium’ cars has widened ever since.

As the first Toyota built in the UK, the Carina E was tailored for European tastes (the ‘E’ stands for ‘Excellence in Europe’, in case you were wondering).

Cabbies spend much of their waking lives behind the wheel, so comfort easily trumps sporty handling on their list of priorities.

Here, the Carina doesn’t disappoint. Its controls are so light and linear, it feels like every moving part is coated in Teflon. Even with a five-speed manual gearbox – rather than the optional four-speed auto – it could scarcely be easier to drive.

The 1.6-litre engine is quiet, while the soft suspension and spongy seats keep you well insulated from the road. Throw the Carina into a corner and its high-profile tyres will squeal in protest. But that’s all part of the fun…

Do you even need to ask? These cars can take a six-figure mileage in their stride, and some have been around the clock more than twice. Toyota features one 153,000-mile Carina E on its blog, which its owner says has “run like clockwork” and never broken down.

The Carina was built before the current EU fuel-test cycle was standardised, so economy is quoted as 57.6mpg at a constant 56mph, or 45.3mpg at 75mph and 35.3mpg on the urban cycle. Those figures compare favourably with many superminis of the time – thank Toyota’s ‘lean burn’ twin-overhead-cam engine.

Absolutely – thousands did. The Carina E is automotive white goods, a car that simply does the job without undue fuss or unexpected expense. Petrolheads may frown upon it, but on a cold Monday morning in February, we’d pick a Carina over a ‘characterful’ old Alfa Romeo every time.

If you have a family, it’s worth hunting down the five-door hatchback, instead of the four-door saloon seen here. The rear seat is comfortably big enough for three (potentially fee-paying) passengers, and folds forward to boost luggage space when needed.

Unloved and worked to death, the Carina E is fast-disappearing from our roads. Just eight were advertised on Auto Trader at the time of writing, and the most expensive of those was only £995. The cheapest, a 1997 car with 184,000 miles, was £375.

For the price of a single monthly finance payment on many new cars, you could buy a Carina E outright. Worth thinking about, isn’t it?

If possible, avoid mega-mileage minicabs and go for a family-owned car with a thick folder-full of service history. That said, mileage is less important than condition at this price.

Check all the electrics work (parts such as window motors can be disproportionately expensive) and listen carefully for ‘blowing’ from the exhaust. The Carina came with a six-year anti-perforation warranty, but rust may be bubbling in the wheelarches and around the sunroof (if fitted).

We were expecting to find the Carina E terminally dull. However, in a world where every thrusting executive car wears a bodykit, sports suspension and rubber-band tyres, the Toyota’s laid-back, softly-sprung charms have grown with age. It’s a superbly relaxing way to travel.

Yes, it still looks bland. And your neighbours won’t be impressed. But console yourself with annual running costs that would barely buy a set of floor mats for a BMW. Few cars can offer so much for so little.

Toyota recently tracked down Britain’s oldest Carina E. Mike Hoyland’s car was among the first to emerge from the Burnaston factory, and was first registered in July 1993.

Mike has owned his trusty Toyota ever since, and has no plans to sell it.

Read the full story on the Toyota blog.