Is the venerable MGB worthy of its title as the UK’s favourite classic car? We drive an immaculate roadster restored by British Motor Heritage. 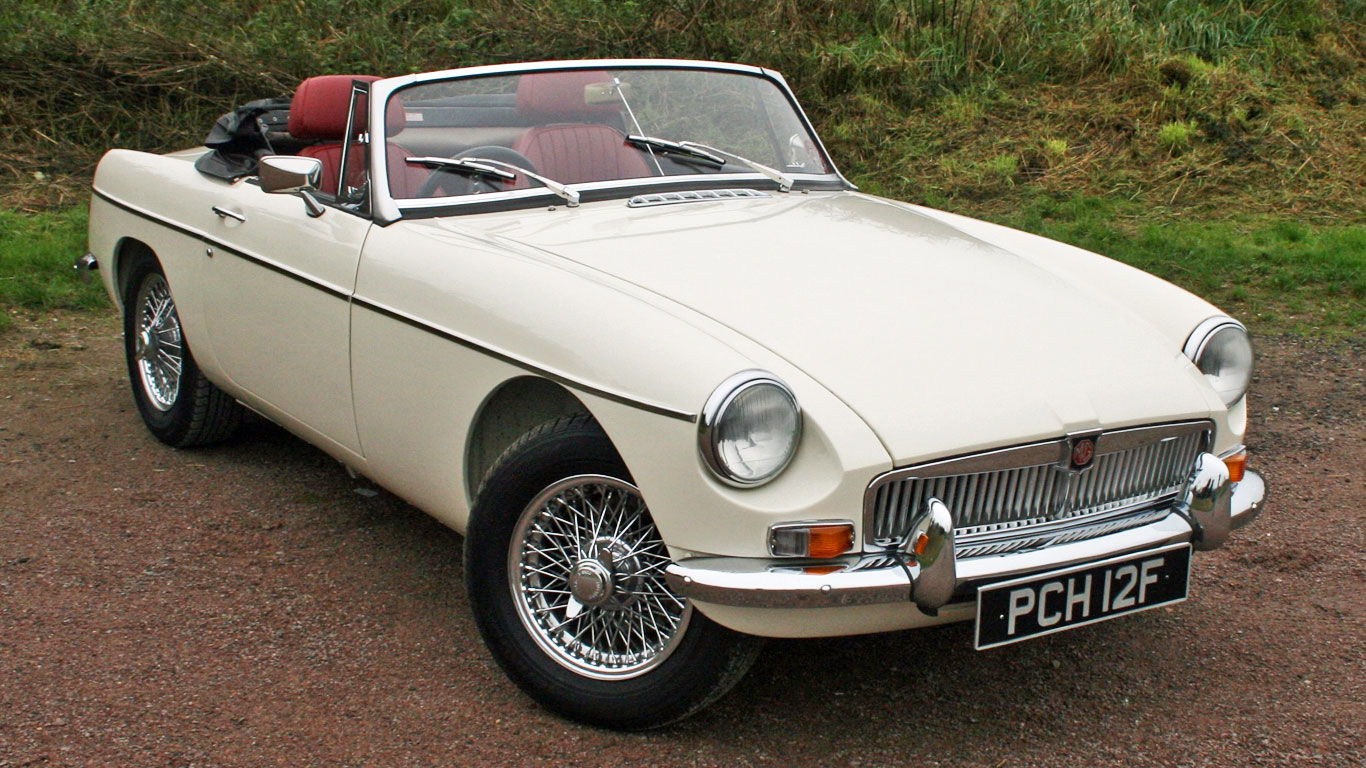 The MGB is perhaps Britain’s most popular classic car. But it’s also a victim of its own success – owners love them, but some enthusiasts turn up their noses when they see yet another MGB turning up at a classic car show.

We’ve put the MGB through our rigorous Retro Road Test to discover whether it’s deserving of the love it gets, or whether it’s overrated.

This example is owned by British Motor Heritage (BMH). The firm was originally established in 1975 as a subsidiary of British Leyland, to support owners of classic cars with parts created using original tooling.

BMH was acquired by BMW as part of its £800 million Rover Group takeover in 1994, before being sold by the Germans in 2001. Since then it has operated as a private company. 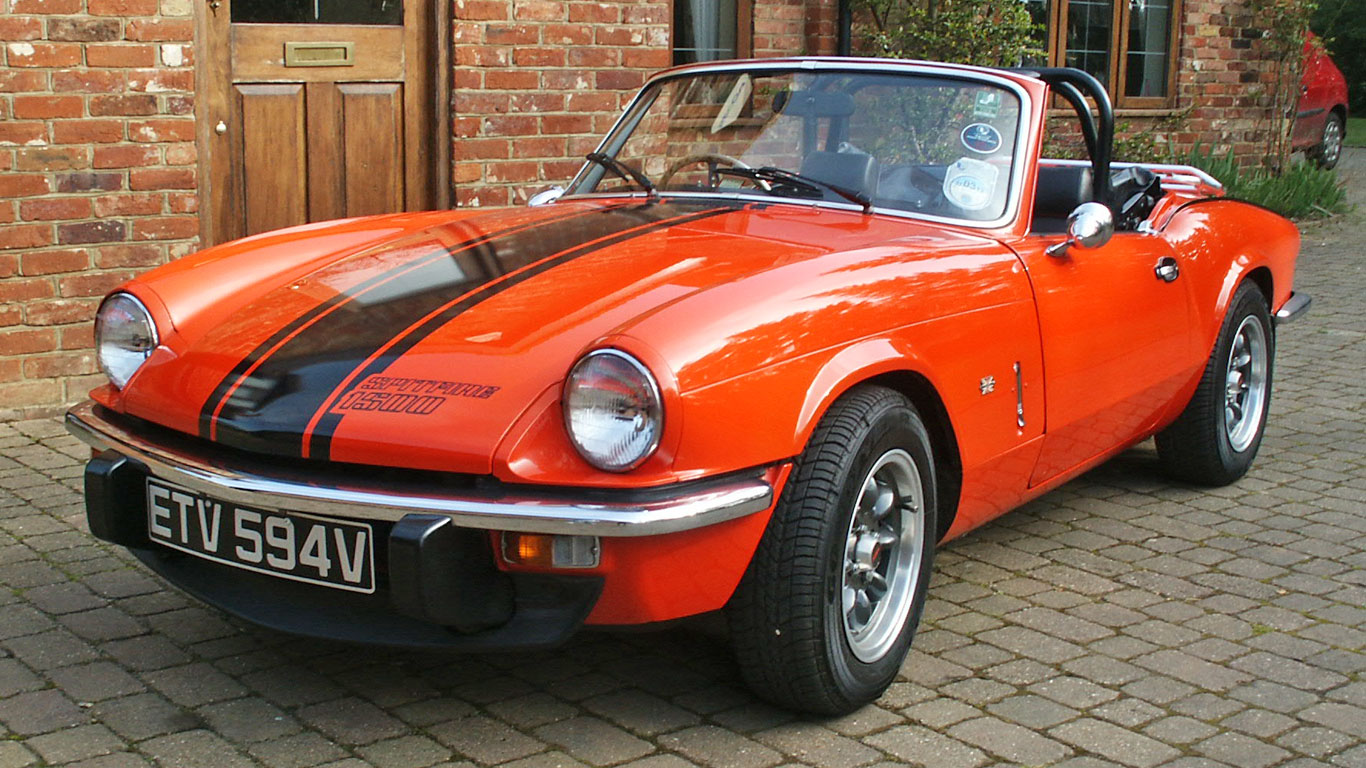 In its time, the MGB would have been a rival for the likes of the Fiat X1/9 and Triumph Spitfire. The MGB is a more appealing proposition in our eyes, but these rivals will certainly be a rarer sight on the roads.

Buyers today might also consider newer classics, such as the original Mazda MX-5. 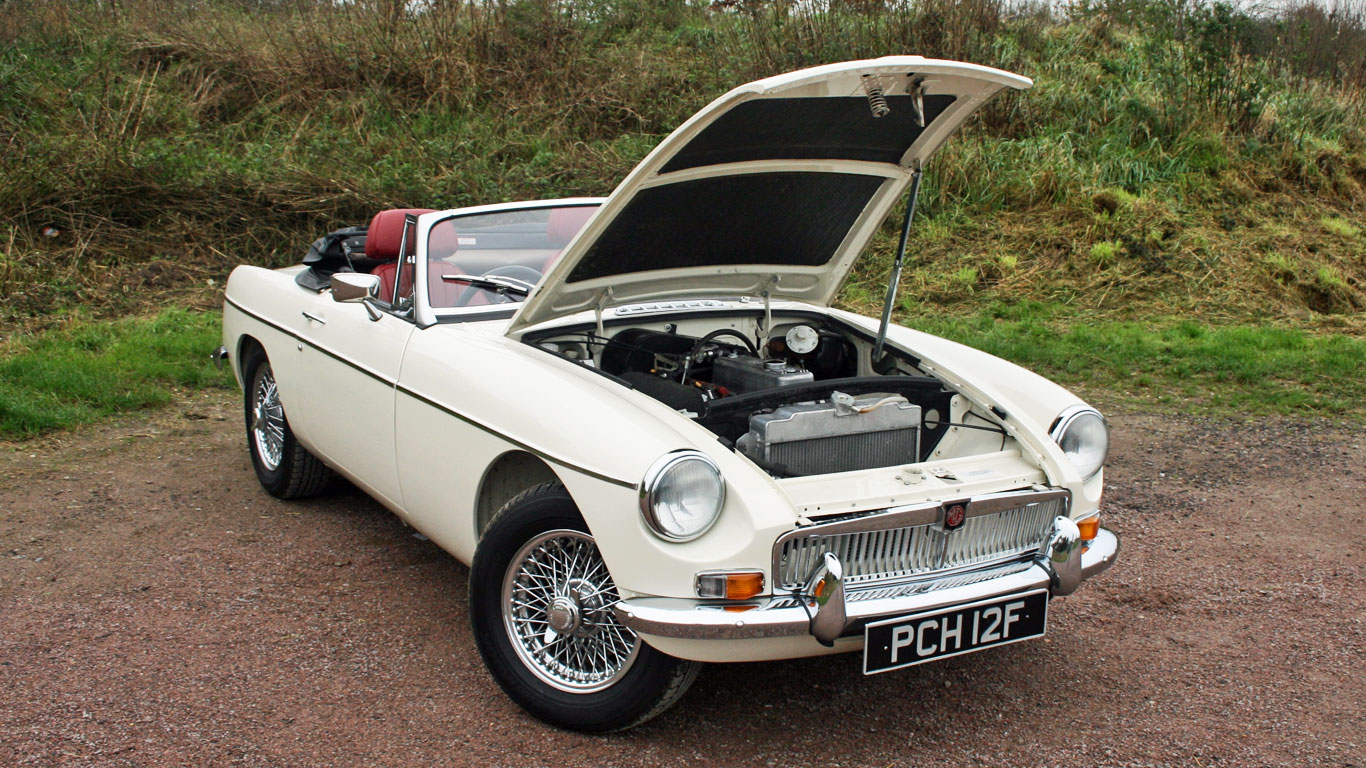 Apart from the special V8 version, all MGBs used the same 1.8-litre B-Series engine. It produced 95hp at most (power was reduced in some versions) – not a lot by today’s standards.

Although it was considered a heavy car at the time, 95 horses are plenty for a car weighing less than 1,000kg. This example isn’t entirely standard either, using fuel injection rather than the standard carburettors. 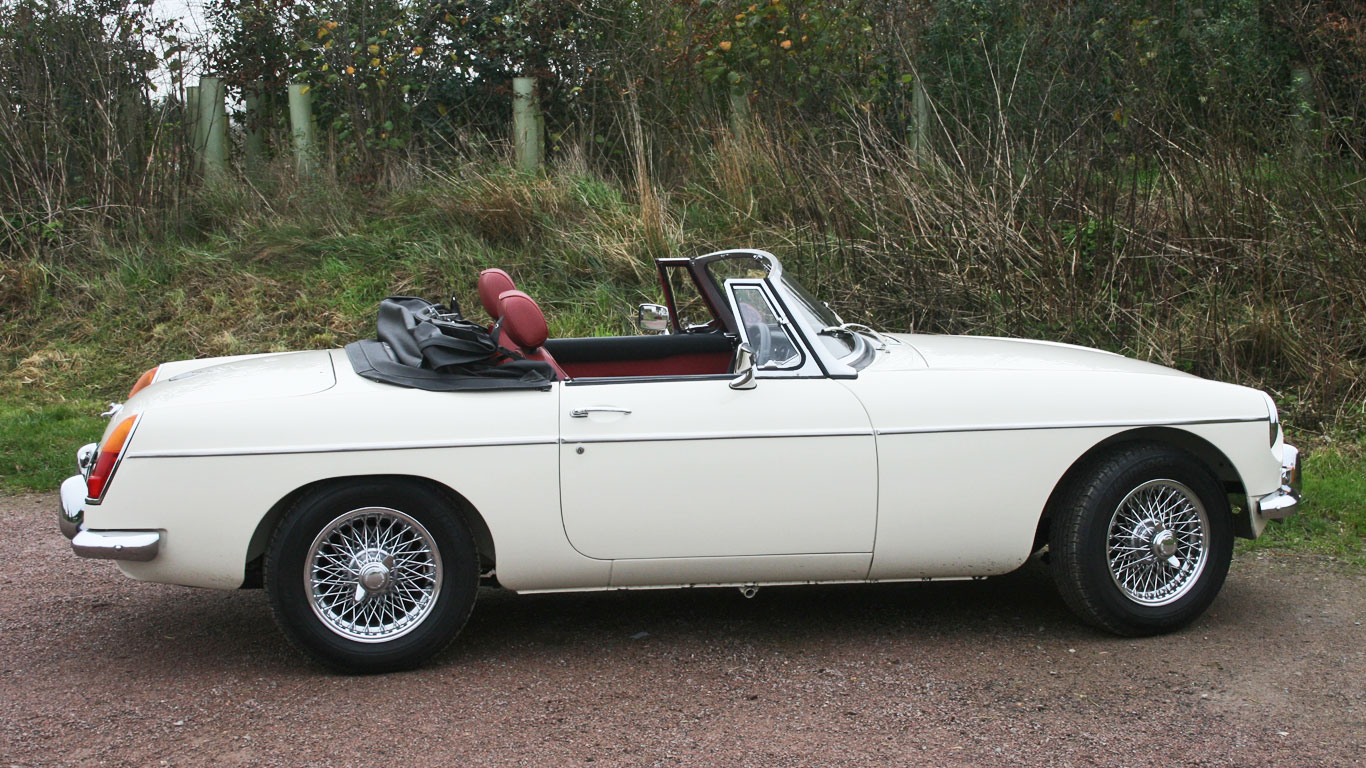 This subject divided opinion in the Motoring Research office. If you’re used to modern cars, the answer is: not very well. The brakes are, naturally, hard work – requiring a big shove of the middle pedal to lose speed. You soon get into the habit of using gears to slow down.

For a car that can trace its roots back to 1962, however, it handles very well. The rack-and-pinion steering provides the kind of feedback drivers of modern cars can but dream of.

It’s a proper sports car driving experience – you sit low down, and its four-cylinder engine creates a pleasing rasp.

This MGB has been re-shelled by British Motor Heritage. The paint is Old English White, with a red leather interior. pic.twitter.com/iA7Yui5elG

What’s really surprising is how muscular the B-series engine feels. Most of the time, you can leave it in fourth gear, flicking the overdrive on and off using the switch on the gearknob.

If you do need to shift, the gear change is a smidgen on the notchy side, but a short throw means it’s not much of a chore. 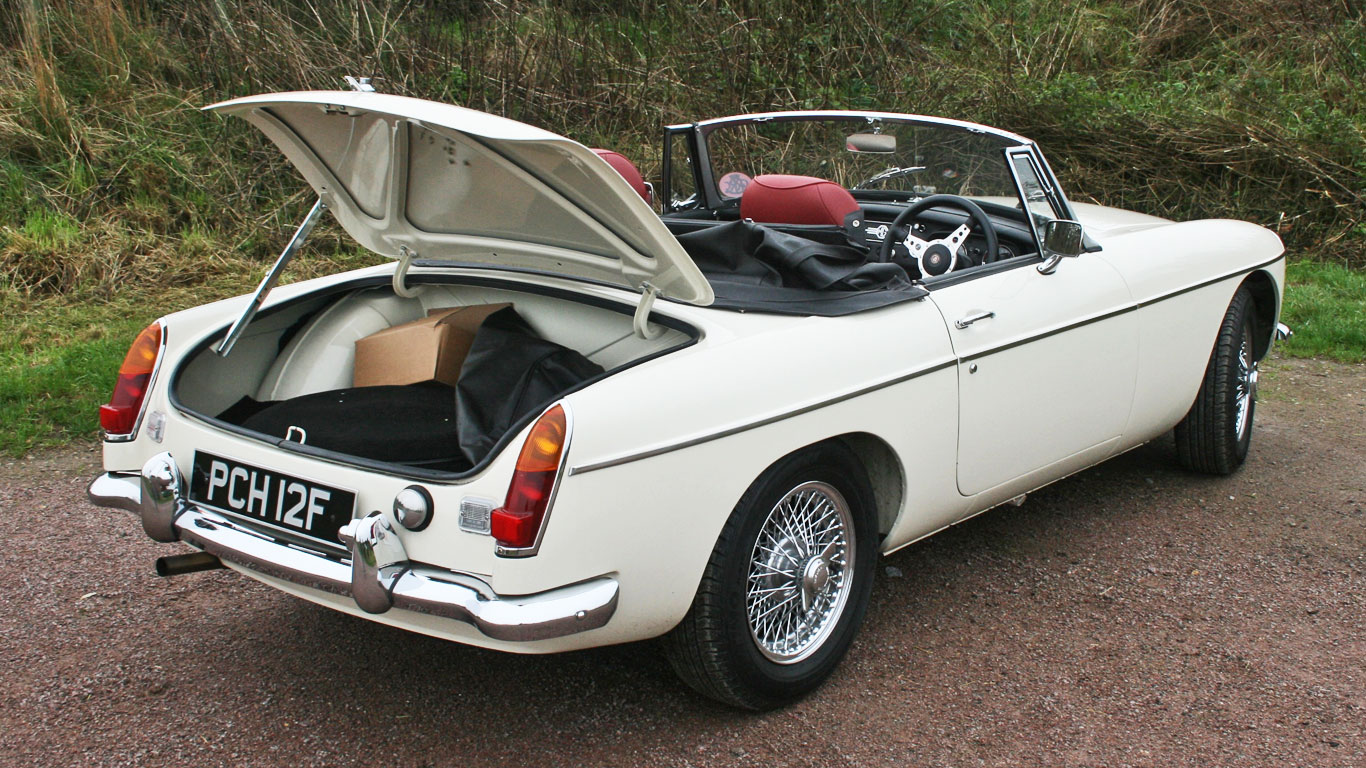 Being such a popular classic car, there’s a huge amount of support for the MGB in both the club scene and specialist companies.

While there’s no reason why an MGB should be unreliable if it’s looked after and serviced regularly, parts are readily available. Also, you’re unlikely to encounter an issue that isn’t covered in depth on internet forums.

Although the 1.8-litre engine isn’t the most powerful, it will be thirsty by modern standards. Don’t expect to see more than 30mpg on a regular basis. 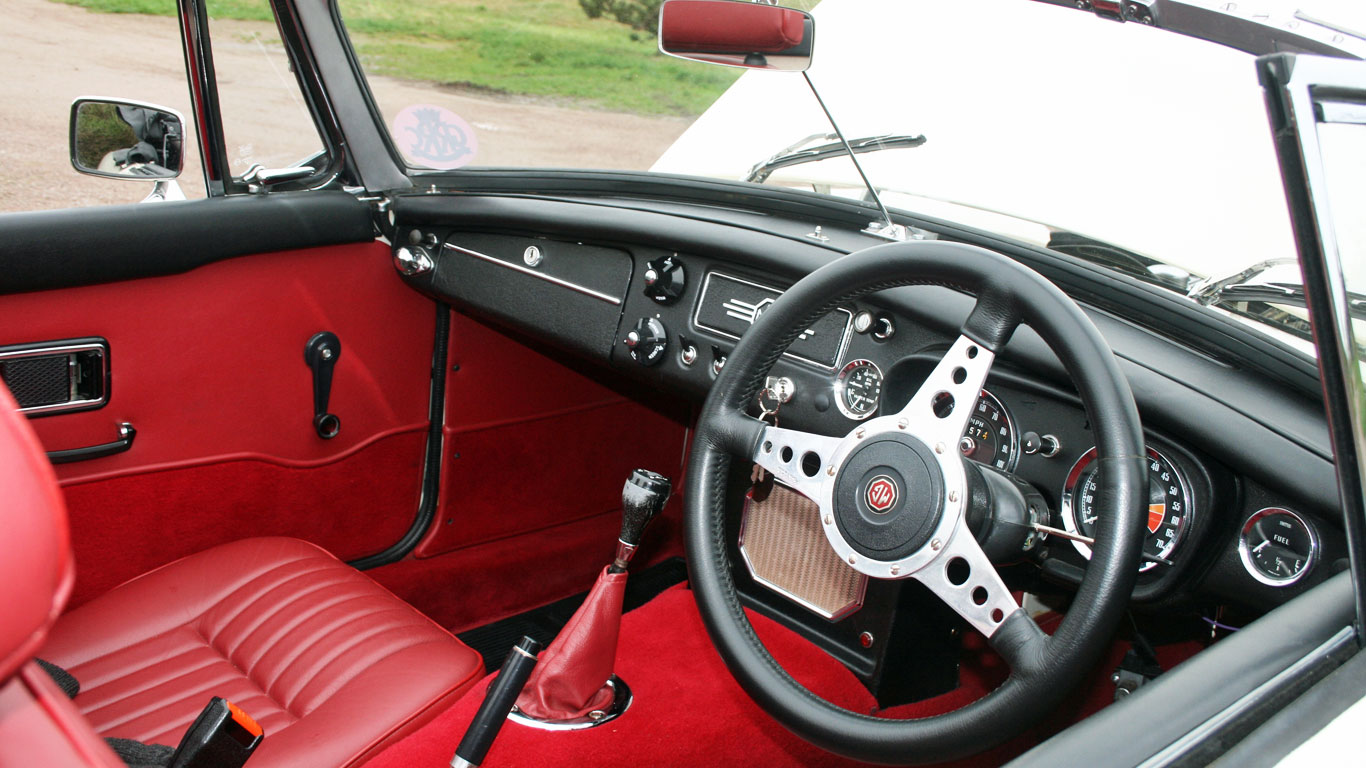 Despite this, you’d have to be very committed to drive an MGB every day. Even this very tidy example could soon become a chore: our man Tim tried it on an M25 commute one November evening and complained about how noisy it was on the motorway – not to mention the lack of radio and heavy steering.

On the plus side, it’d be easy to make an MGB easier to live with – whether by fitting power steering, a radio, or comfier seats. The overdrive makes things quieter, too. 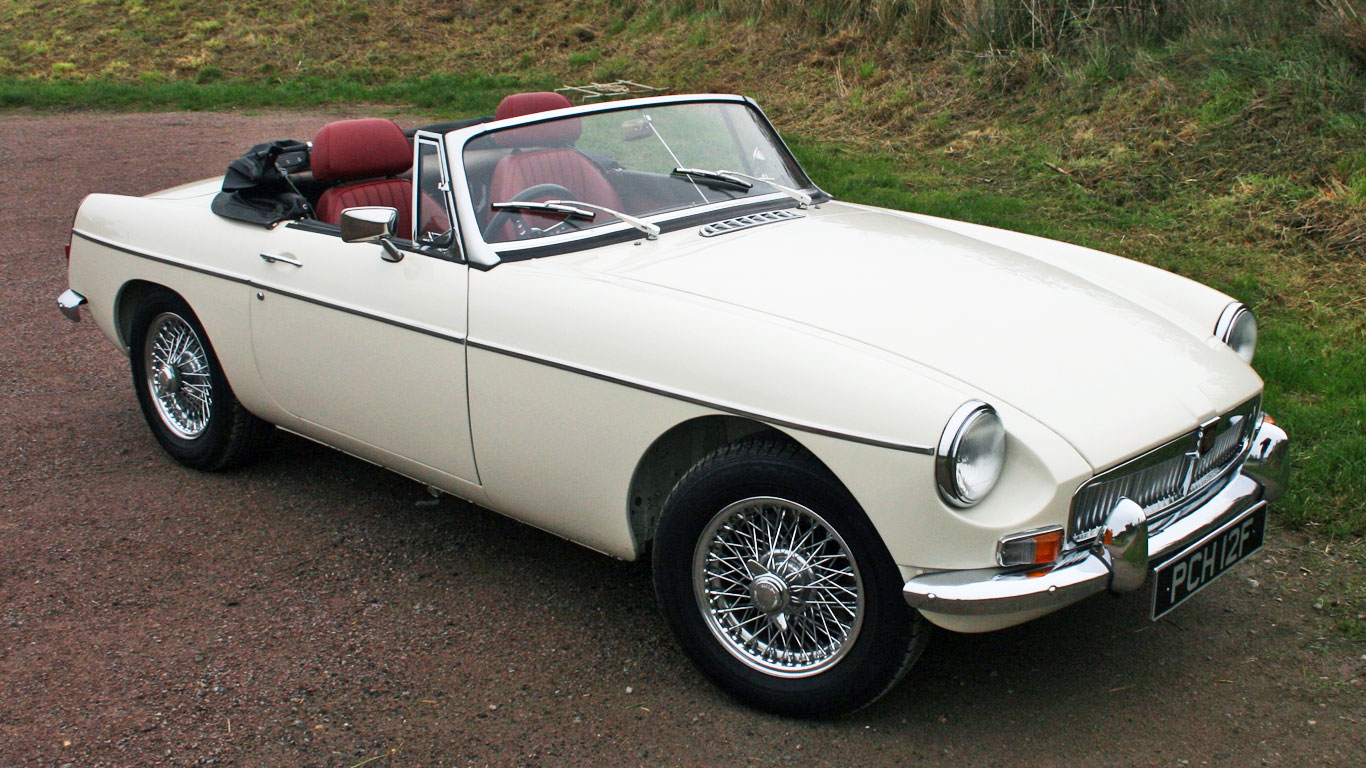 MGB values vary dramatically. The GT model is less desirable than the roadster, and people are happy to pay more for the earlier examples with chrome bumpers.

You can pick up a ropey rubber-bumpered GT for a couple of grand, but you probably shouldn’t. A £7,000 budget will buy a tidy roadster, or you can double that in the hunt for a restored example.

Rust. A few minor bubbles on the wings or sills can be hiding much more serious rot – and that can be expensive to sort out.

BMH can provide panels – they’re brand new, and made using the original tooling so should fit perfectly – but they’re not cheap. To give you an idea, a steel bonnet will cost £532 (and that’s not including painting or fitting). An aluminium one is more than £900.

Other than that, it’s pretty much the regular classic car precautions. Has it been looked after? Serviced regularly? Are there any modifications – if so, have they done to a good standard, and are they the sort of modifications you’d want? Track day mods won’t be ideal if you’re looking for a car to pootle around in at weekends. 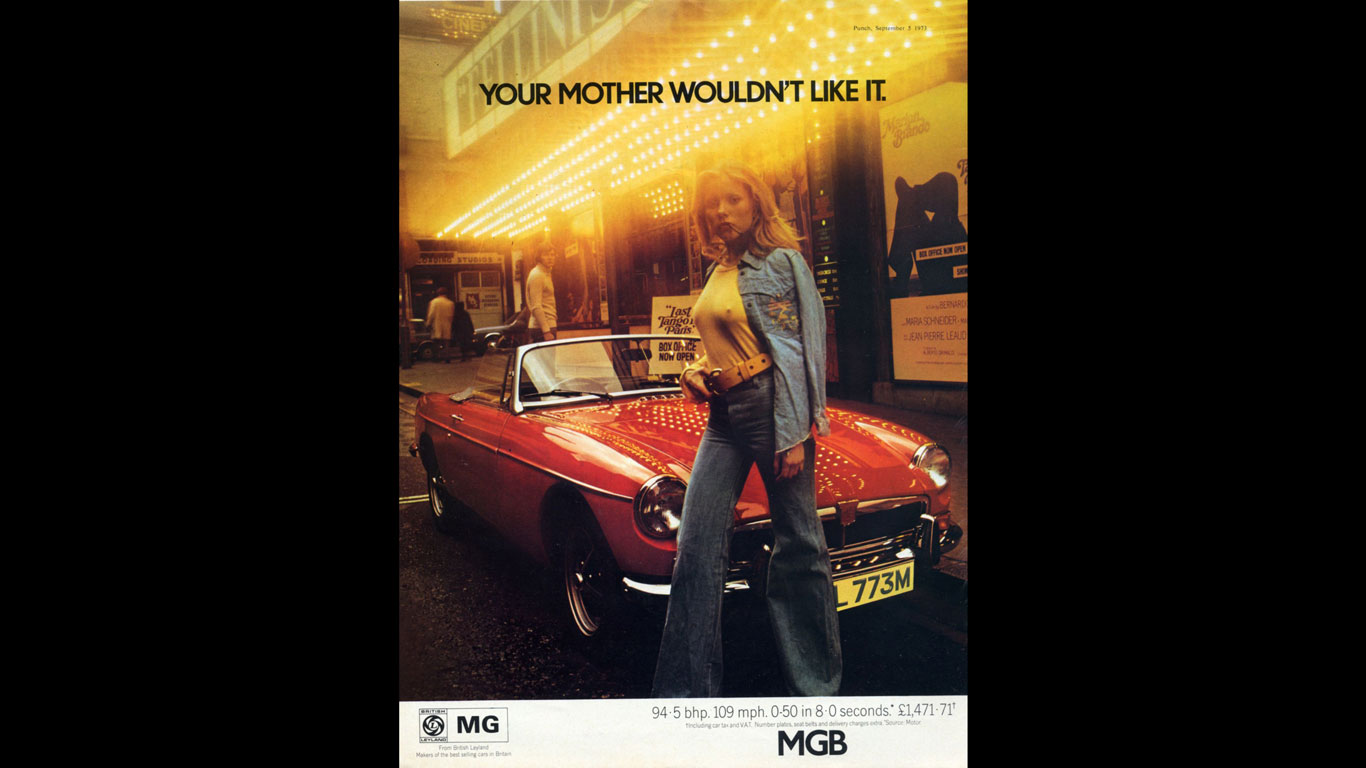 It depends what you want in a car. If you get your thrills from driving flat-out on country roads, or are looking for a track-day car, there are better, newer options out there.

If you want a rare classic that’ll get lots of attention, there are lots of slightly leftfield options available.

But if you want a British sports car that’s brilliant at cruising around on a sunny day, with a huge support network, the MGB is ideal. 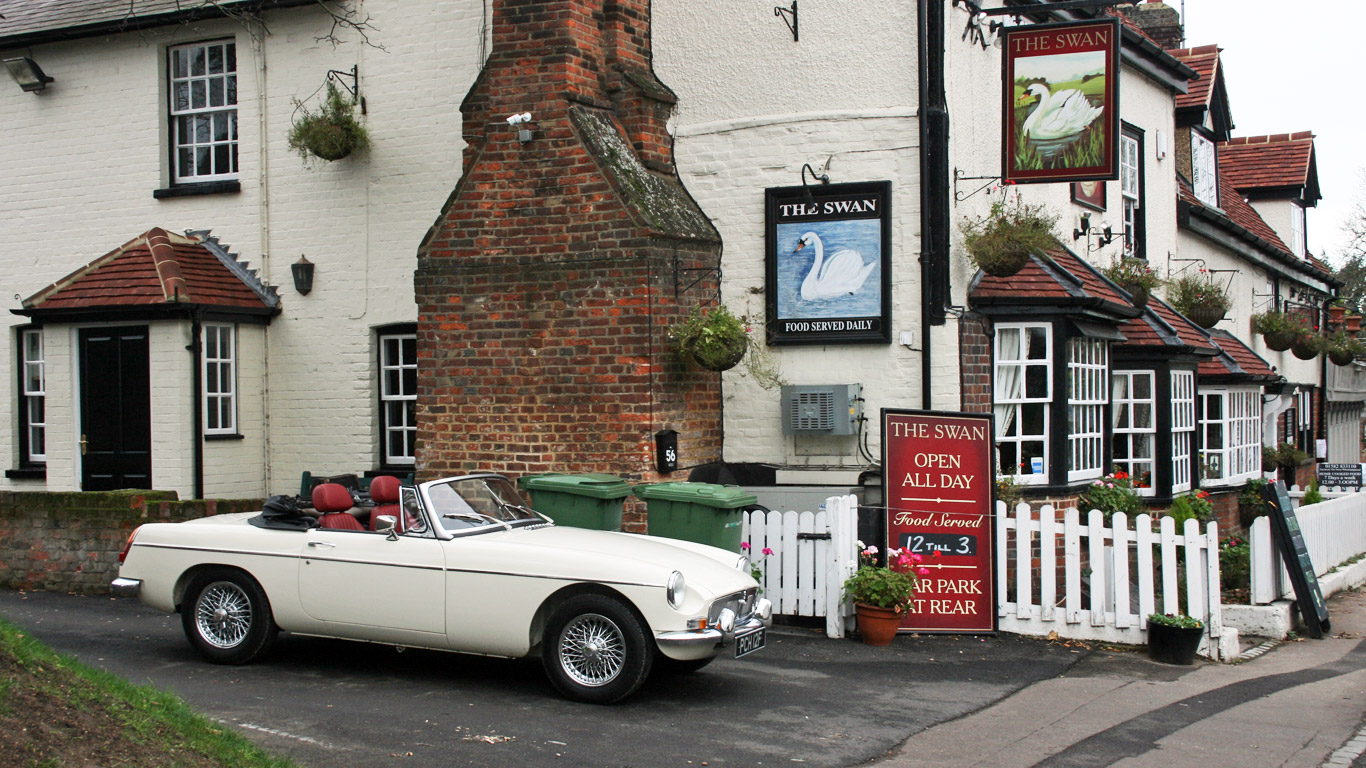 In 1967 MG launched a 3.0-litre straight-six version of the MGB, known as the MGC. It was intended to replace the Austin Healey but soon developed a poor reputation.

The heavy engine and new suspension meant it didn’t handle as well as the MGB, and journalists at the time criticised it. It was axed after just two years.

Confirmed or cancelled? Your guide to 2020’s motoring events

The F355 is a relatively affordable – yet fabulously exciting – way to live the Ferrari dream. We drive the evocative F1 Spider.
Read more
Previous articleTriumph Motorcycles launches its first e-bike
Next articleWhy are diesel particulate filters a problem?

How much can you REALLY drink and then drive the next day?
Read more

30 of the most extreme Lamborghinis ever made

Raging Bulls: Lamborghini is at its best when it’s going wild. We celebrate the most extreme Lambo
Read more

Unexpected fees can be a nasty surprise when you return a car at the end of a finance deal. Here are some actionable tips to avoid them.
Read more
Car News

Nissan slammed by DVSA for failing to fix Qashqai diesel

Nissan has come under fire from the Driver and Vehicle Standards Agency for its reluctance to tackle excessive emissions from the Qashqai dCi diesel.
Read more
Car News

Britain has newer cars than every European country – apart from one

Figures show that only Luxembourg has a newer fleet of vehicles than Great Britain, where sales have been propped up by affordable finance and PPI payments.
Read more
Car Reviews

Alvis stardust: driving one of the world’s first supercars

As part of a preview of The Classic & Sports Car Show, we drive a rather special 1938 Alvis 4.3-Litre Short Chassis Tourer
Read more
Car News

Highway to heaven: the M6 in Cumbria is England's favourite driving route according to an online survey by Highways England.
Read more