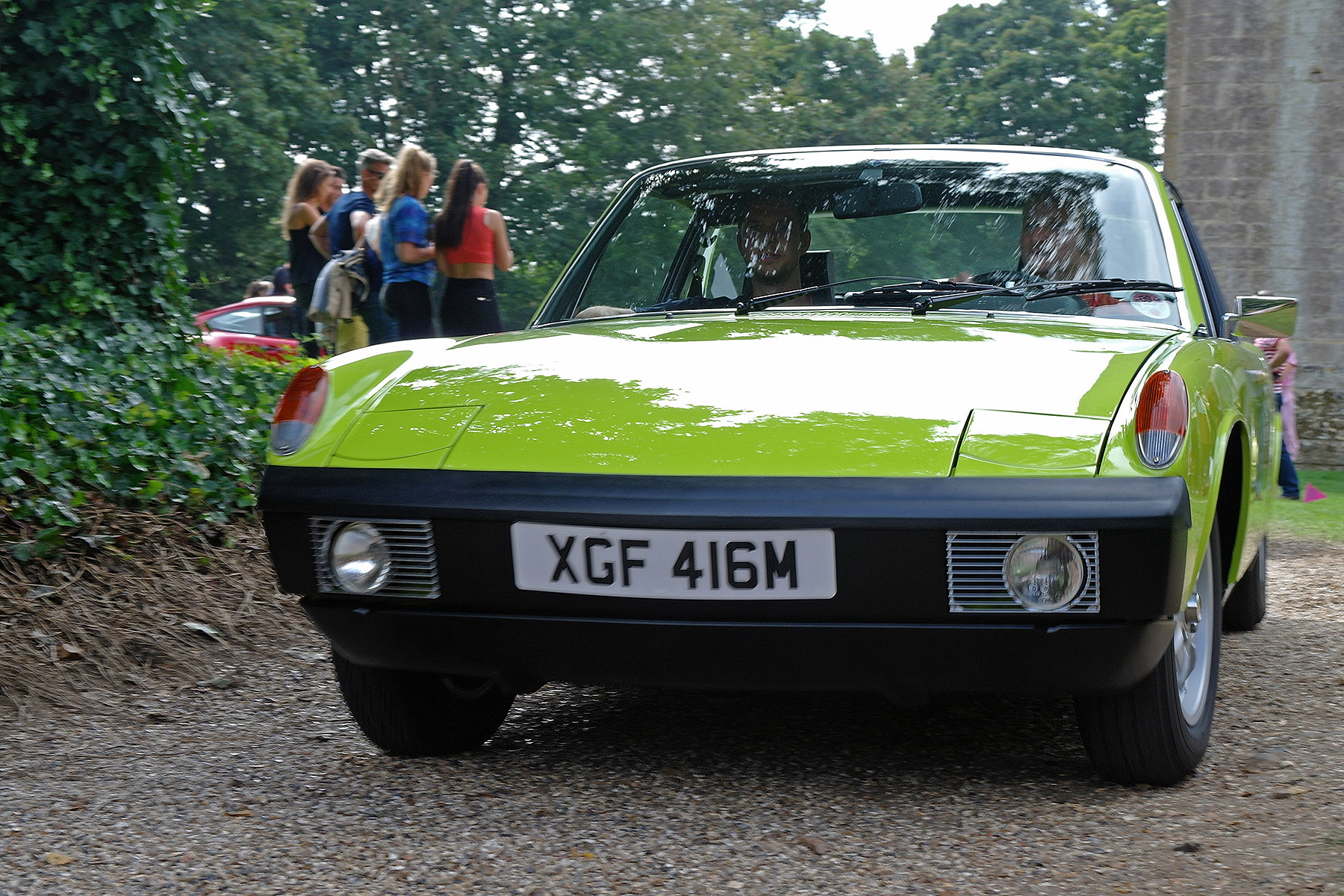 The Porsche Boxster reinvigorated the company’s fortunes in 1996 and has gone on to be an unmitigated success. But, 27 years earlier, an entry-level Porsche with the same mid-engined template went on sale. To celebrate 50 years of the unloved sports car, we take a trip down memory in a 1974 Porsche 914.

The Porsche 914 was launched at the Frankfurt Motor Show in October 1969 and its flatly-styled roadster body, twin luggage compartments and removable targa roof panel were a world away from the curvy 911 coupe.

Born of a Volkswagen/Porsche joint project to serve the needs of both companies, the 914 was built by Karmann and fitted with a range of Volkswagen-derived air-cooled four-cylinder engines and Porsche-engineered six-cylinder units.

While seen by many as a failure, the baby Porsche was in production from 1969-1976 and was considered a sales success, with 118,962 examples of the two-seater made. Rare in the UK, over 80 percent of 914s ended up in America. 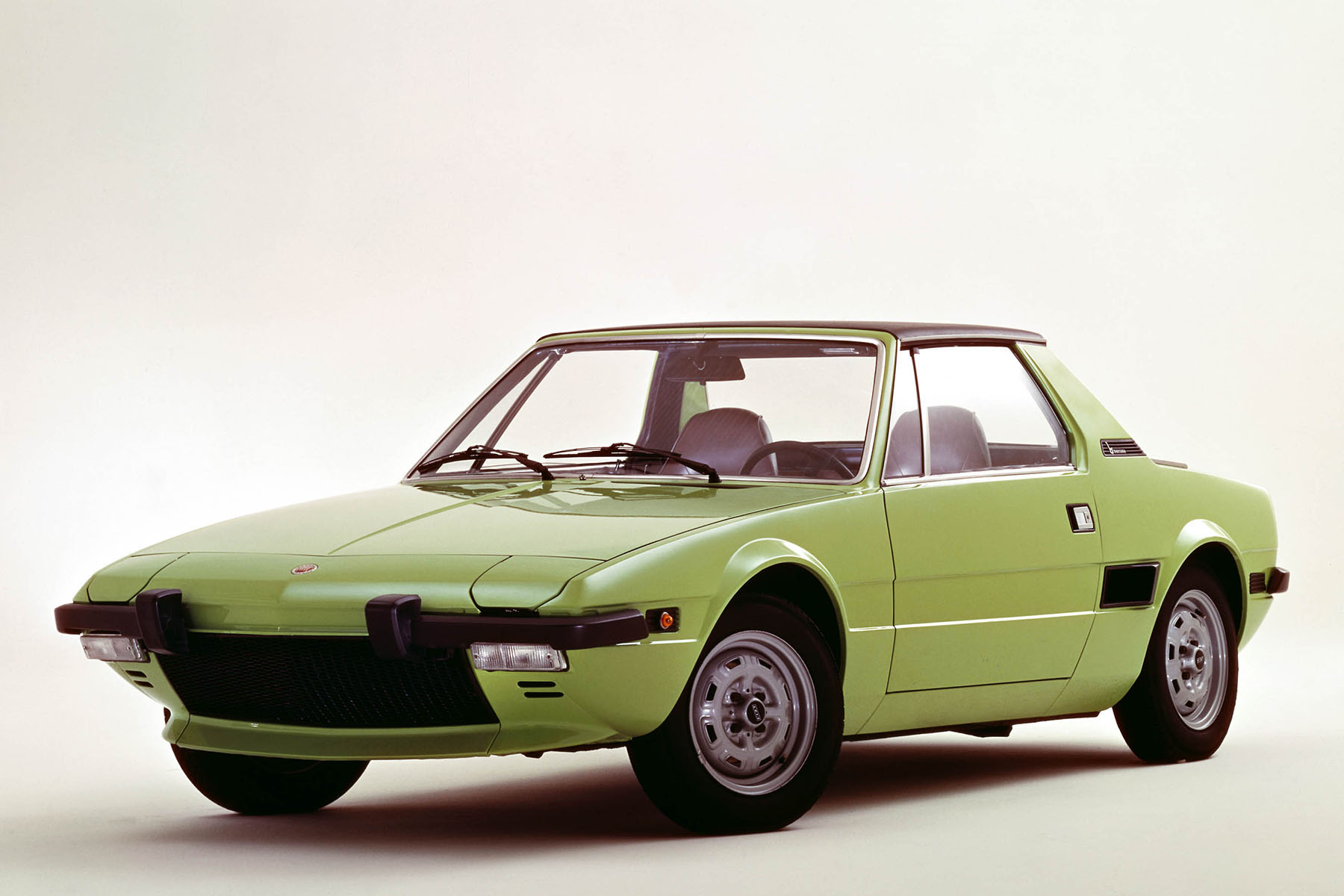 The 914 was one of the first small sports cars to embrace the mid-engined idea. The little Porsche’s most notable competition was the Fiat X1/9 (pictured above) which shared the German car’s mid-engined layout and flat nose, but added a Triumph TR7-like wedge silhouette.

The Matra 530 pre-dated the Porsche and was another small two-seater which used the same configuration, while other competition included the front-engined, rear-wheel drive Fiat 124 Coupe/Spider as well as the Datsun 240Z and Opel GT. The MGC and Triumph TR6 meanwhile had the six-cylinder 914/6 in their sights. 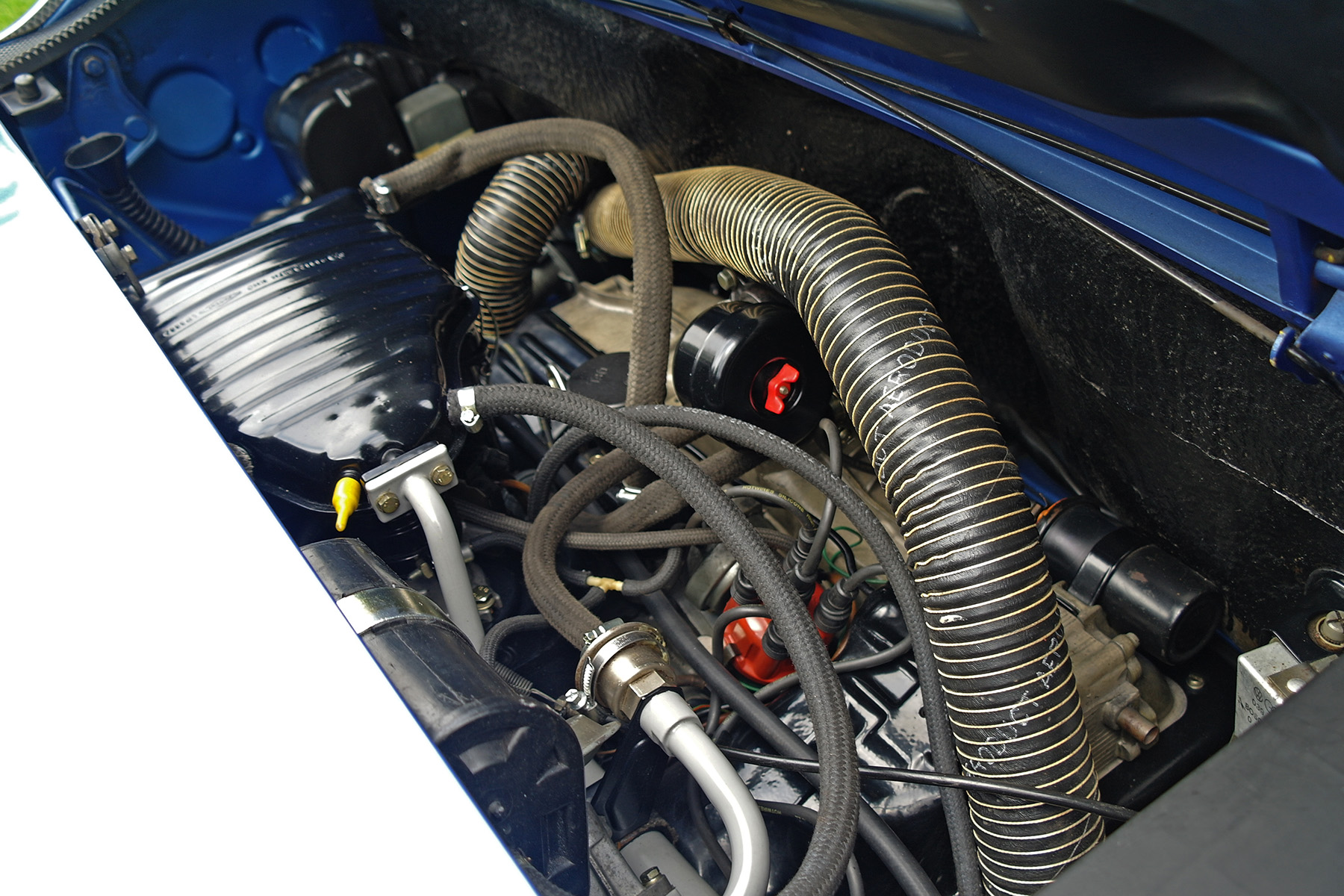 Are you sitting down? If not, take a pew: we could be here a while. During the 914’s short six-year life, there were a bewildering 10 engine options. Early four-cylinder 914/4s borrowed an 80bhp fuel-injected 1679cc flat-four engine from the unloved Volkswagen Type 4/411 saloon, while the ‘proper Porsche’ 914/6 used a carburettor-fed six-cylinder 110bhp unit from the 1969 model year 911T. 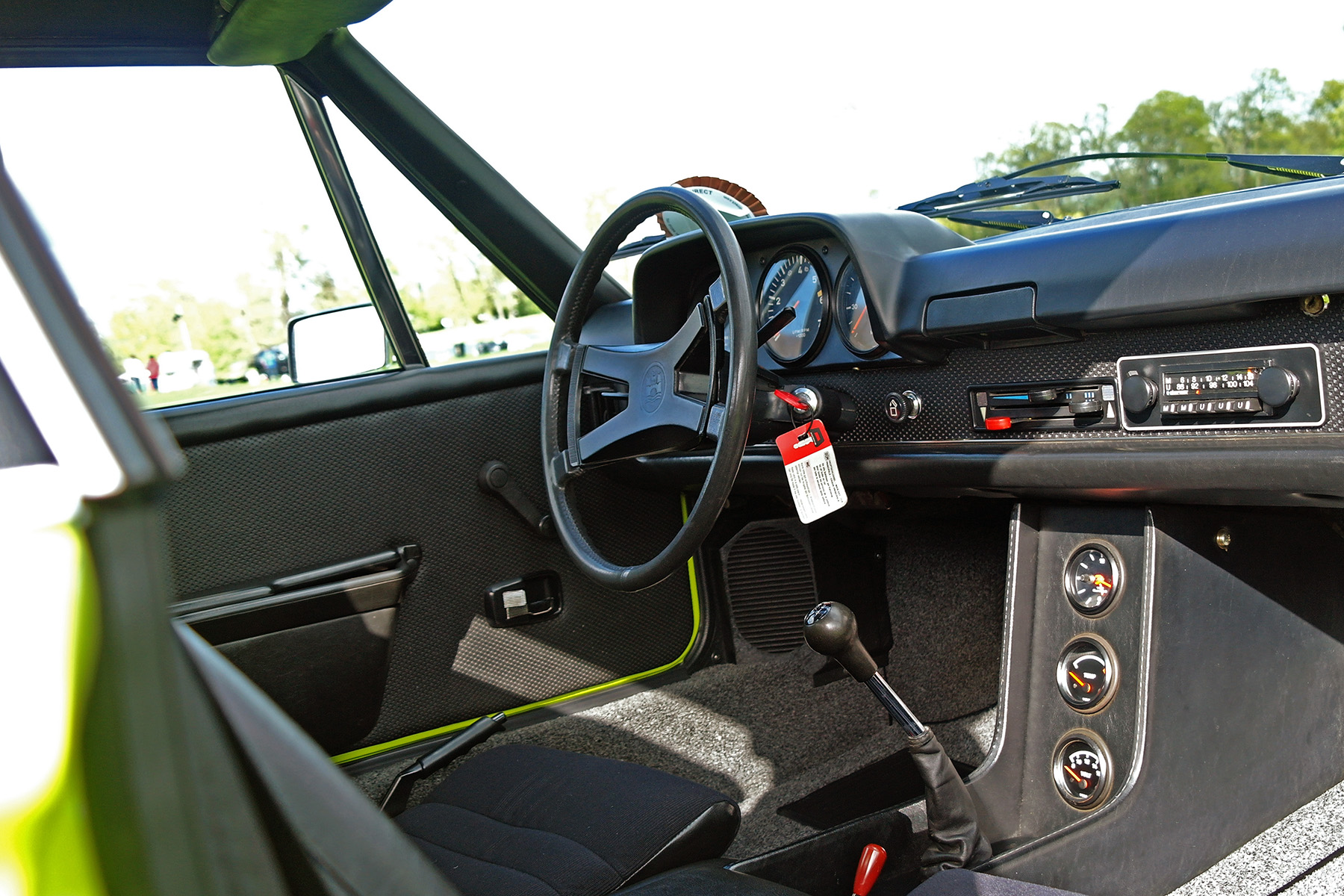 Most 914s weigh around 900kg, so expect adequate rather than blistering performance from a standard car. Early four-pot cars did the 0-60mph dash in around 13 seconds, while the six-cylinder 914/6 knocked three seconds off that. Performance isn’t at the top of the 914’s agenda, though. On a sunny day, with the roof stowed away in the boot, outrageous speed doesn’t matter when you’re bowling down leafy-lined country lanes.

When it was new, the 914 earned itself a reputation for being an arguably better-handling car than the contemporary 911 due to its mid-engined layout. Sit in the snug seat, grab the small steering wheel (all 914s were left-hand drive only) and revel in the little Porsche’s nimble control as you dart from corner to corner on relatively skinny 4.5/5.5-inch-wide 15-inch wheels.

Long footwells thanks to the car’s clever packaging mean short and long bodies shouldn’t have much trouble getting comfortable, and while the five-speed gearbox isn’t the most positive (sorted in 1973 with a side-shifting linkage), it just about does the job. Just inches away from your ears, the flat engine throbs behind you in a similar way to a Volkswagen Beetle’s. 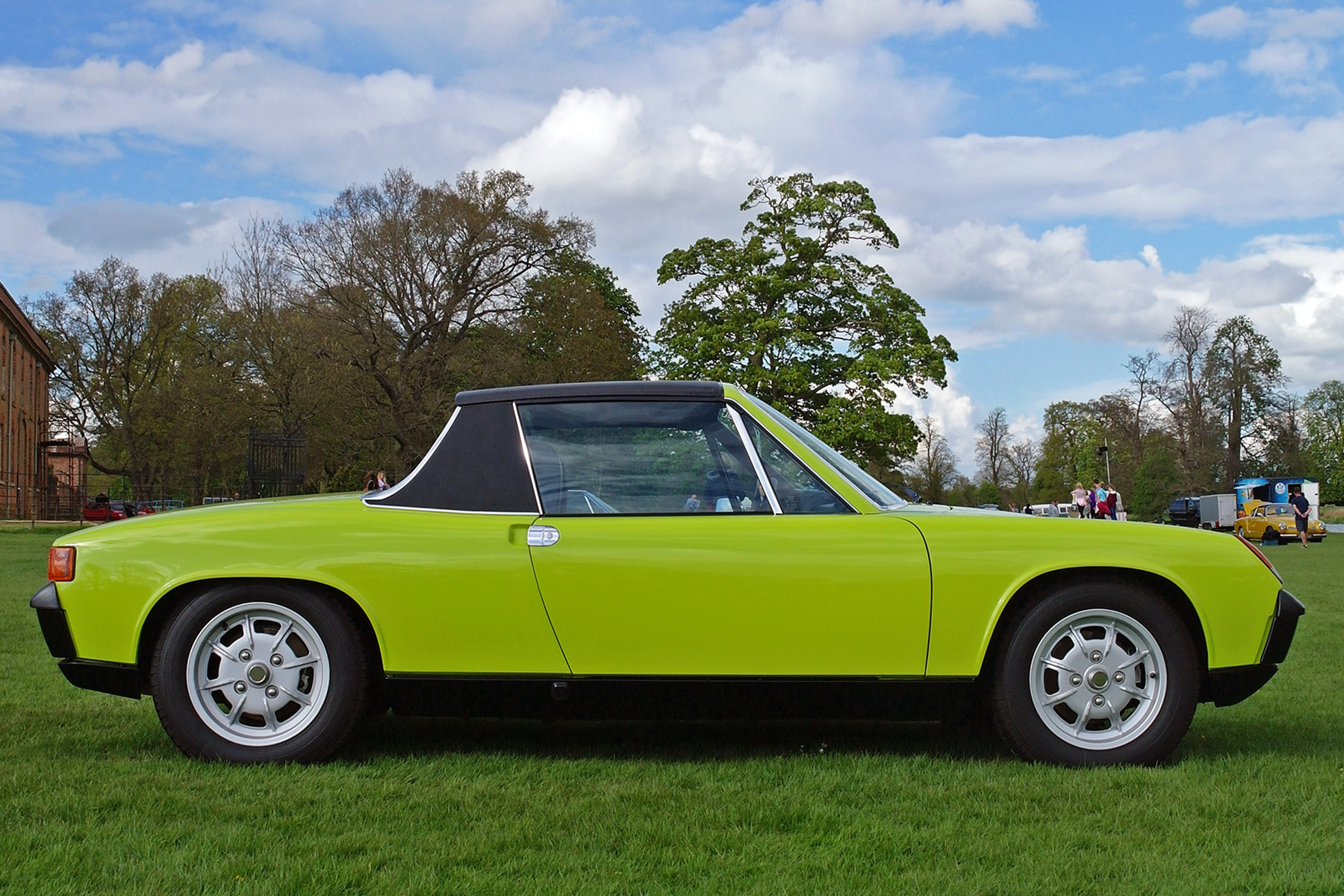 Just like the Volkswagen Polo featured in a previous Retro Road Test, the 914 has long lived in the shadow of more illustrious and famous siblings. Even more less well-known than other entry-level 1970s and 1980s Porsches such as the 924 and 944, the 914’s popularity is increasing.

Forty-five years since its birth and as values rise, it is now being seen as a classic in the making and even a member of the ‘proper Porsche’ club. Lots more replacement panels and parts are now available and there are a healthy number of Porsche specialists who actually know what the car is. 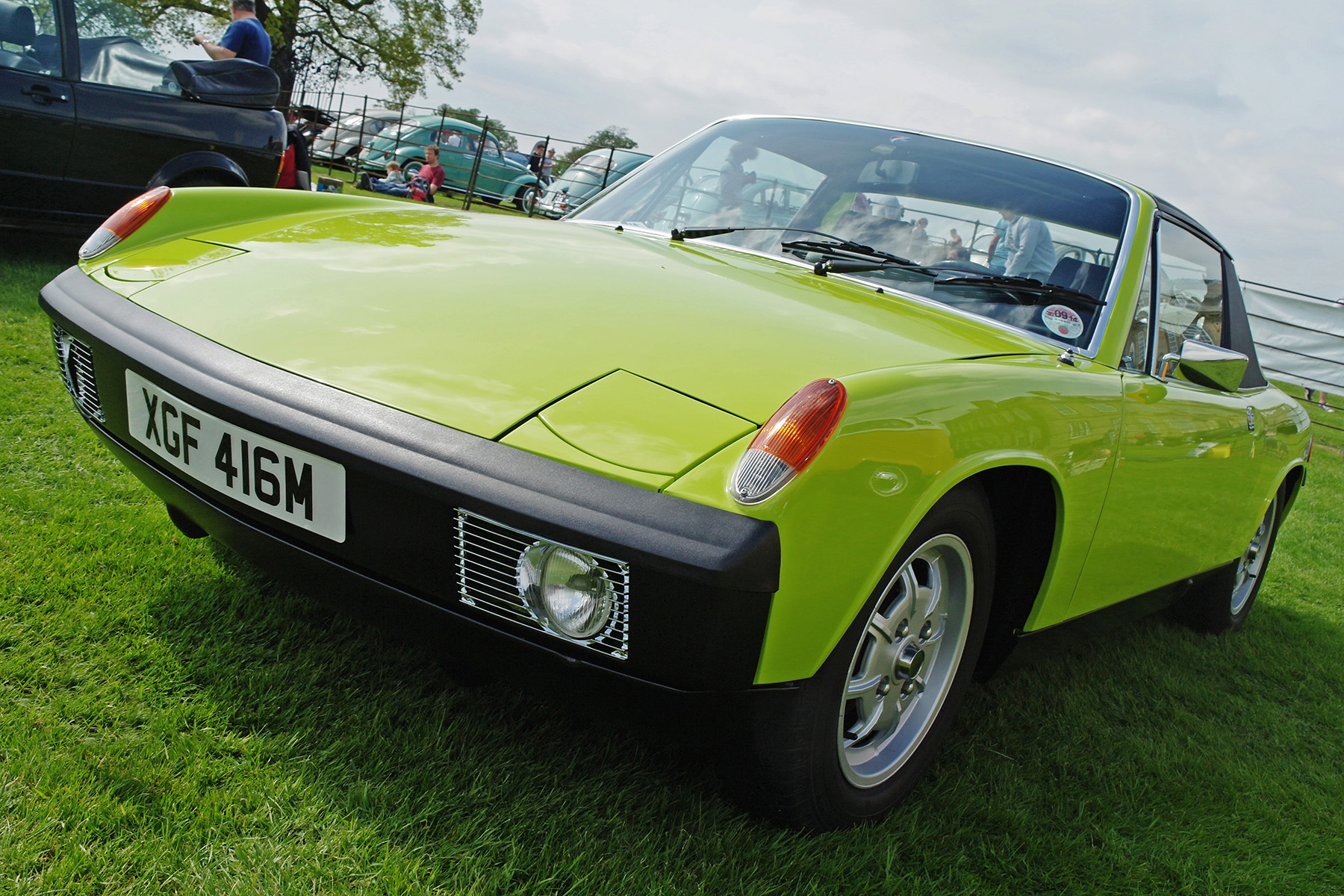 The 914’s small footprint and practical body with its pair of luggage areas can make it a everyday proposition. We know of one enthusiast who does just that and uses a later, more scruffy car (from a fleet of 10!) to bumble around in on a daily basis, keeping his concours condition car stored away.

The intense driving experience – given in part by that engine noise emanating from just behind your seat – steering wheel on the wrong side and sometimes recalcitrant gearbox might be too much for some. Unless the car has been seriously rust-proofed, we’d probably recommend occasional use only. 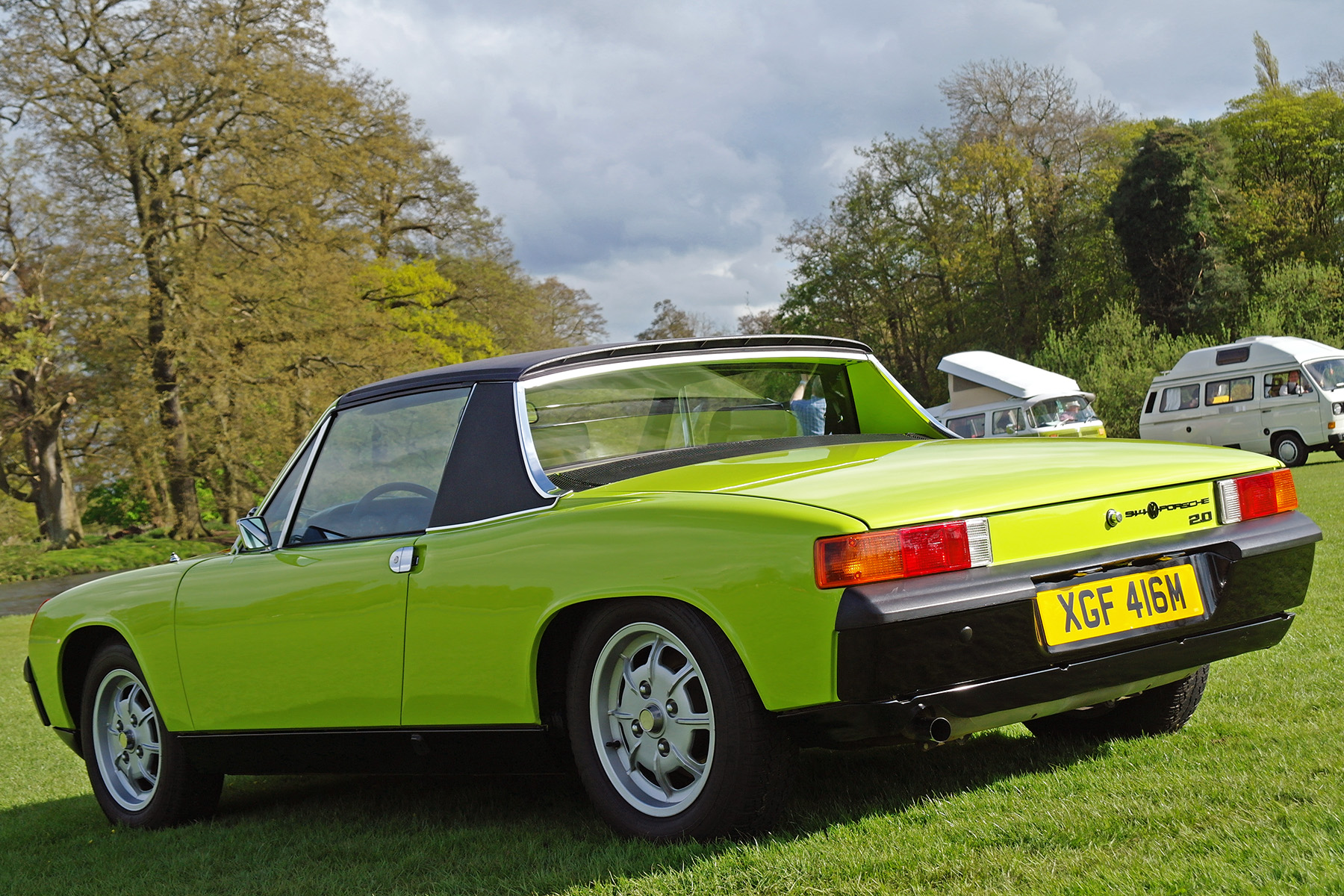 The six-cylinder 914/6 is a rare thing and you should be prepared to pay upwards of restored four-cylinder car prices – we’ve heard of genuine matching number cars going for anything from £40,000. Always buy on condition, rather than specification. 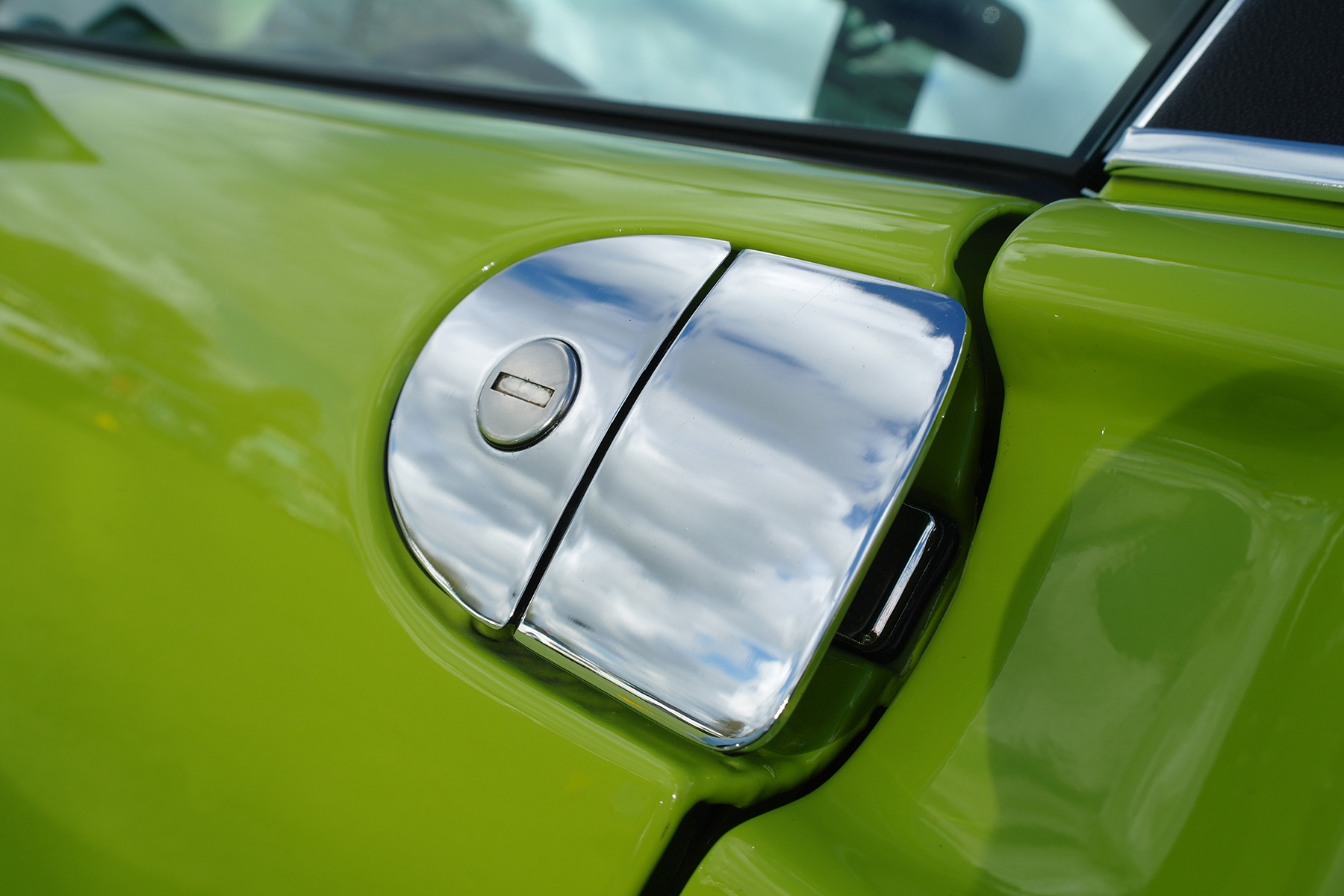 As with all classic cars, rust is one of the major enemies of the 914. Check the labels for corrosion and damage, as well as misaligned doors which can point to more serious accident-related issues. Door handles can be fragile, too.

The battery tray can be a big 914 issue as rust can creep towards the rear suspension mountings and, along with corroded suspension turrets, can cause the car to collapse on its wheels. Check too for correct fit and alignment of the removable glassfibre targa roof panel – a non-sung fit can mean sagging sills.

Body seals can also go, especially on U.S. cars which have spent their lives in a hot climate. Replacement sets cost around £1,000. Similarly, sun-exposed dash tops can crack. Engines usually suffer few major problems, but where fitted, original fuel injection is much more preferable to carburettors.

With the earliest cars now 50 years old, fuel lines will need checking for leaks if they appear to not have been replaced in the past. Four-cylinder cars should have chassis numbers starting with ‘47’ (for Volkswagen Type 47), while genuine six-cylinder models will be known by their Porsche-derived ‘914’-led identifiers. 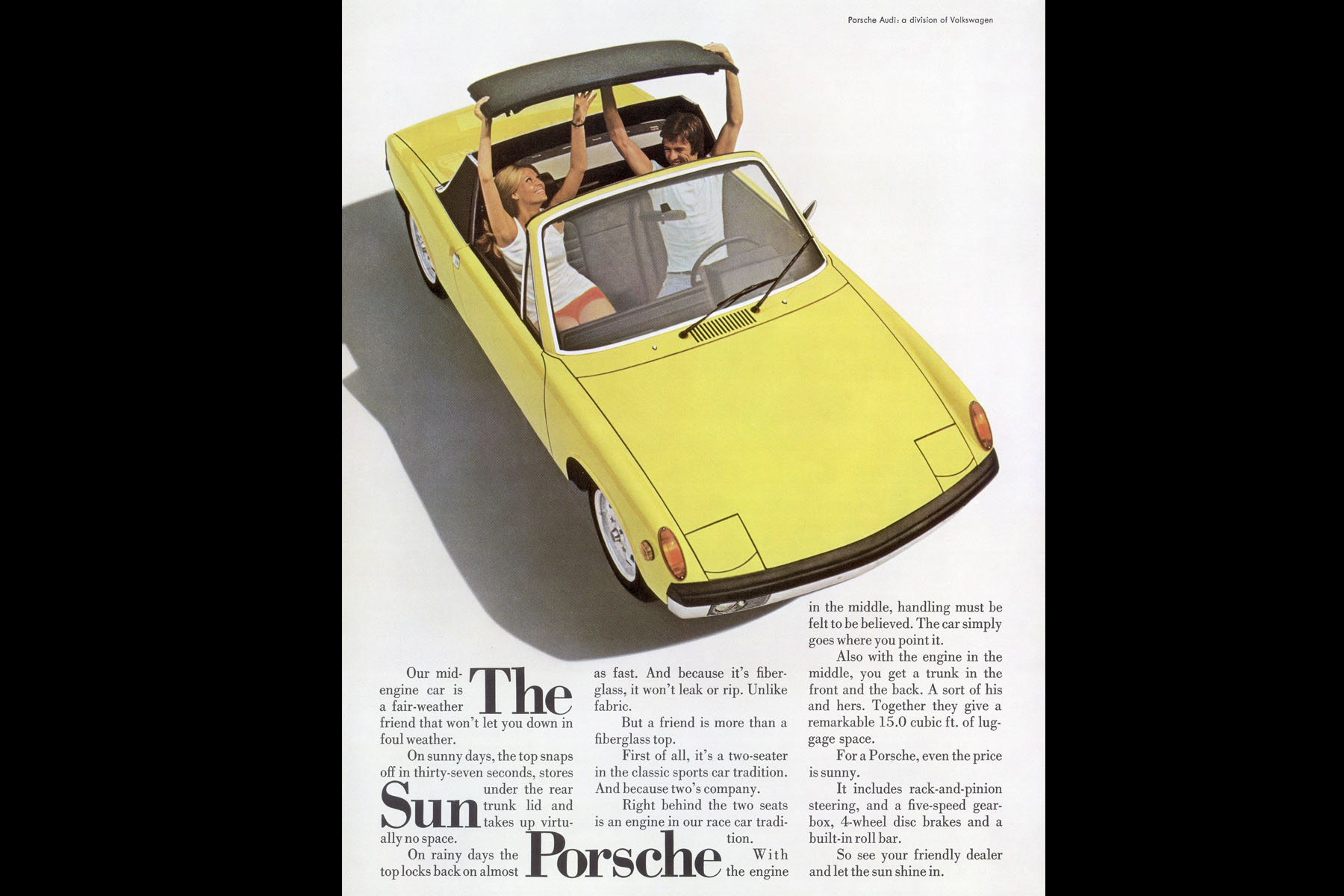 If one of a wide range of 1970s motoring oddballs tickles your fancy or you want a rare piece of Porsche history, then yes. Bold colours, striking looks, a practical and roomy body, and rarity value – when was the last time you saw one? – make the 914 genuinely appealing.

Those largely reliable Volkswagen-engineered and Porsche engines mean parts can be easily sourced, with around 1,700 now available. An eager online network of 914 owners and forums will lend enthusiastic support should you have a problem. 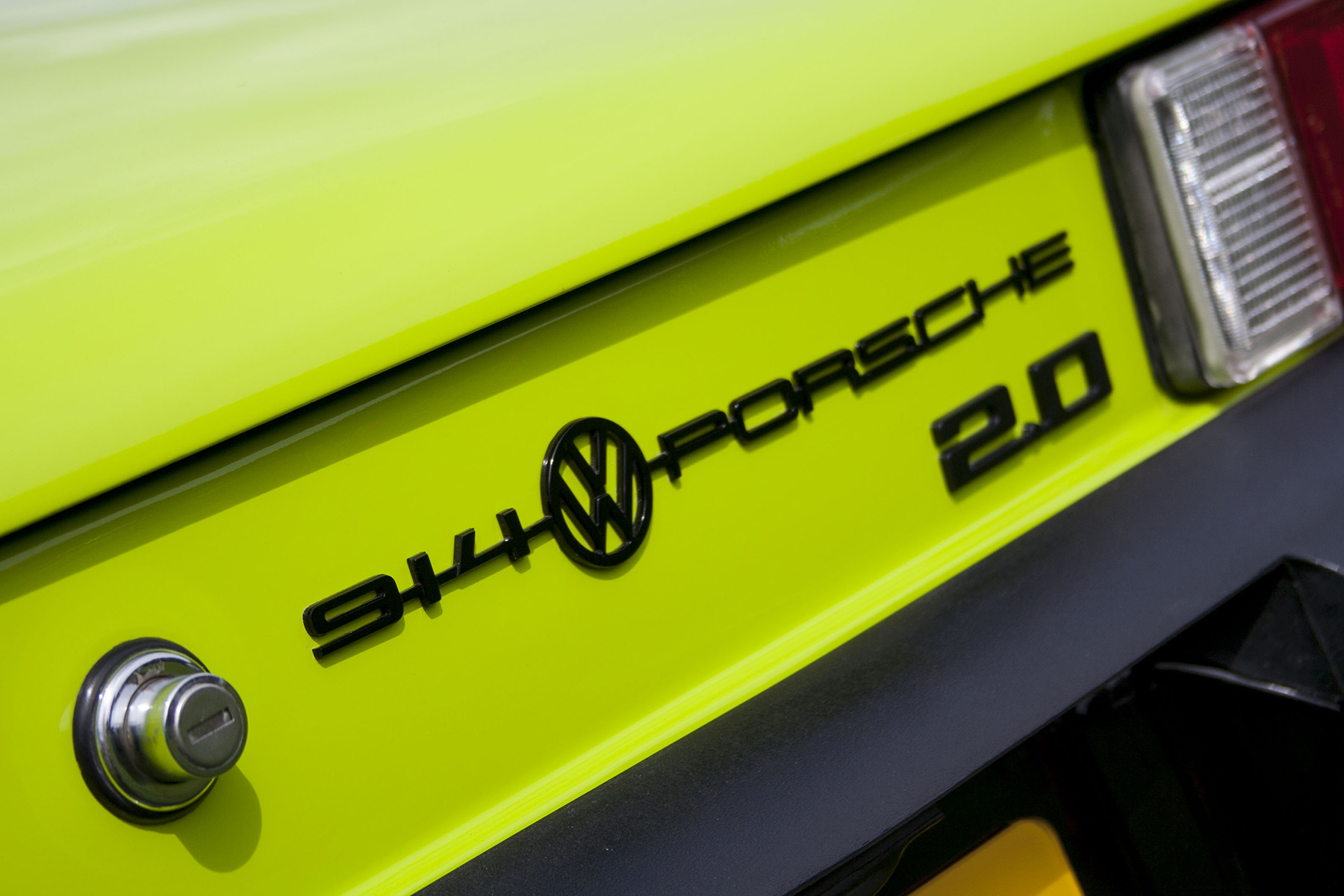 The Porsche 914 was badged ‘VW-Porsche’ in Europe and most other major markets thanks to its shared parentage, but only appeared with a Porsche badge in the U.S., removing all traces of the Volkswagen connection.

Eight Porsche 916 prototypes fitted with the engine from the 1973 911 Carrera RS were built for a suggested limited production run – before Porsche pulled the plug – while an even more powerful pair of near-300bhp eight-cylinder 914/8s were also made: a Blood Orange one for Ferdinand Piech and a silver car for ‘Ferdinand ‘Ferry’ Porsche.