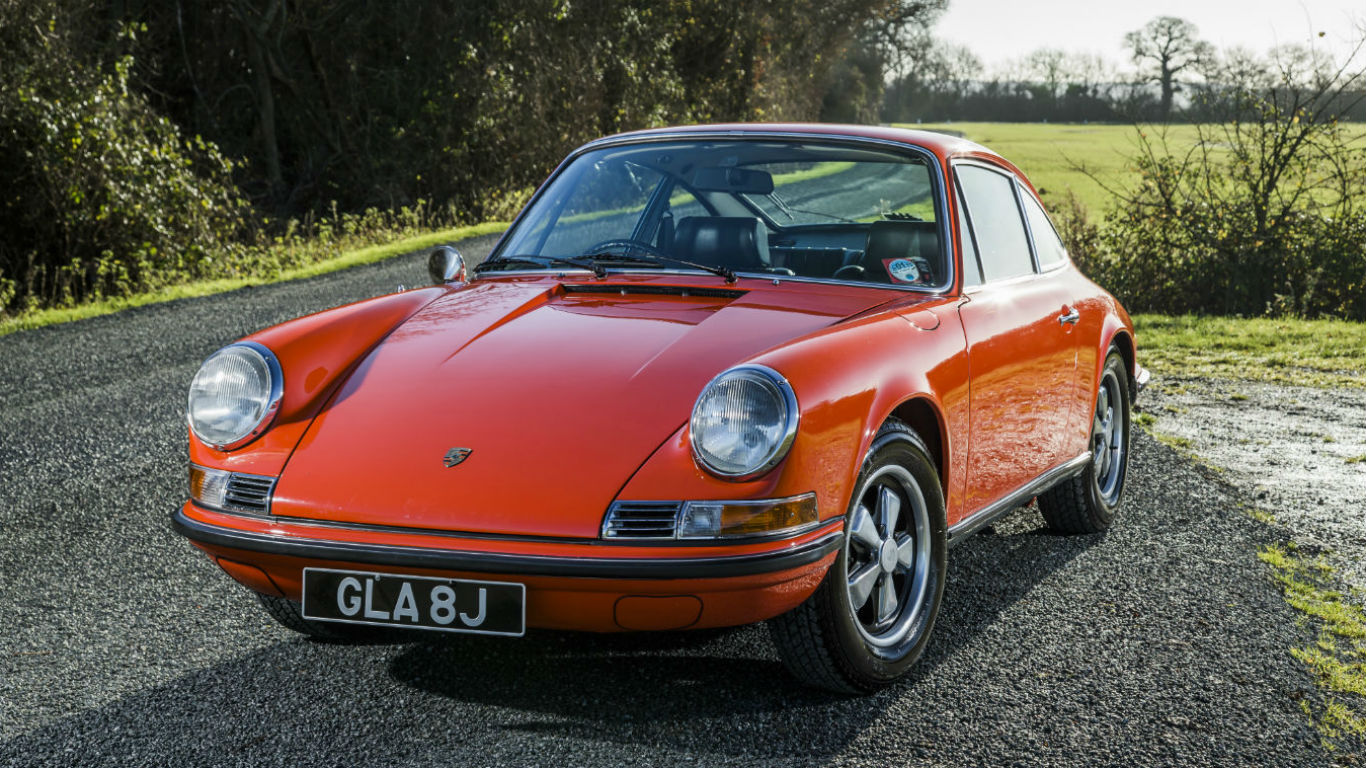 First, the bad news. If you want a classic Porsche 911, you’ve already missed the boat. Prices soared skywards years ago. For one of the very best cars, like the 911S tested here, you can now expect to pay well into six figures.

However, let’s not be blinded by finance. Regardless of its material value, a vintage 911 is both beautiful to behold and – as we’ll discover – bewitching to drive. So whether you’re a potential 911 driver or a penniless 911 dreamer, sit back and enjoy our most exotic Retro Road Test yet.

Thanks to Porsche specialists Autofarm for supplying this 1971 Porsche 911S, which was for sale at the time of writing.

Other rivals included the Jaguar E-Type and BMW 3.0 CS. However, neither is a pure sports car like the Porsche.

Autofarm describes the 180hp 2.2-litre flat six in this 911S as ‘the ultimate form of Porsche’s original 911 engine’. It was a modern unit for 1971, with mechanical fuel injection and an automatic choke.

The engine sits behind the back axle – in trad-911 style – and drive goes to the rear wheels via a five-speed dog-leg gearbox. For the uninitiated, first gear is across and down (where reverse would often be), while the other four ratios are arranged in a simple H-pattern.

Turn the key and the air-cooled six coughs and chunters into life. Its turbine-like whirr fills my ears and vibrates my fingertips through the skinny, four-spoke wheel.

Old 911s don’t like cold starts, so I give the engine a few minutes to warm up, using the hand throttle (a small lever next to the handbrake) to keep the idle speed high. Did I mention the sickly-sweet smell of oil? A classic Porsche is a car for all the senses…

Pulling away, I’m struck by how light the steering is (most of the car’s weight is at the back) and – shortly afterwards – by how ineffective the brakes are. That’s to be expected in a car of this era, of course. But it’s worth acclimatising yourself before you reach that first roundabout…

The engine is smooth and deliciously free-revving, although it doesn’t really wake up until about 5,000rpm. From there, the noise hardens to a synapse-tingling snarl and it charges to the 7,200rpm redline with real urgency.

Grip is limited by modern-car standards and there’s no doubt the rear-engined Porsche could bite back if you overcooked a corner. But it’s refreshing to drive a car that can be enjoyed at sensible speeds. The 911S is as much fun at 30mph as a new 991 Carrera at 60mph.

Porsches have a reputation for robustness and the 911S comes from an age where most things could be fixed with a socket set and a can of WD40. Even so, any car this age will need regular TLC to keep it running properly. Prepare to budget several thousand pounds for maintenance each year, as official Porsche parts won’t come cheap. Especially if they’re rare, deleted items, such as obscure pieces of trim.

On the plus side, car tax (VED) is free and a classic car insurance should keep costs down.

Compact dimensions, light controls and excellent all-round visibility (thank those skinny roof pillars) make the 911S a surprisingly capable commuter. Yes, the dog-leg gearbox is a pain in town, but you’d get used to it. Ditto the old-car brakes.

However, it seems a shame to use a car this special for the daily grind. The lack of air-con would be a pain in summer, while salty roads would ravage the bodywork in winter. And, much as we hate to say it, a classic Porsche is an investment – so it pays to use your car sparingly and keep it in tip-top condition.

This immaculate 911S would set you back you £180,000-£200,000, although many are worth considerably less. It’s rare to find an old 911 that hasn’t been restored, so condition is more important than mileage. And service history is vital.

Classic Porsches are very colour-sensitive, with bold, bright hues commanding the highest prices. Perhaps that’s why this particular car was resprayed from its original beige to Blood Orange, the factory competition colour of the era.

There isn’t much that Autofarm’s founder, Josh Sadler, doesn’t know about 911s. These are his five top tips for buying one:

This, or a new 911 GT3 RS – plus a BMW M3 for your significant other? Put like that, a £200,000 911S seems expensive. But remember, while most modern cars will lose value faster than you can say ‘depreciation’, a classic 911 is an appreciating asset. Admittedly, Porsche prices can’t continue their rapid ascent indefinitely, but a rare and desirable car like this will always have value to collectors.

Anyway, we promised not to get carried-away with all that. And the 911S is so much more than a set of figures on a balance sheet. I loved every minute of driving it – climbing back into a modern car seemed desperately dull by comparison. Sadly, I’m firmly in the ‘dreamer’ category when it comes to cars of this calibre. But if my numbers came up…

If you think a 911S is pricey, try shopping for a Carrera 2.7 RS. Only 1,580 examples of this most desirable of 911s were made, and the best cars can top £1million. Amazingly, on my visit to Autofarm, I spotted no less than five.