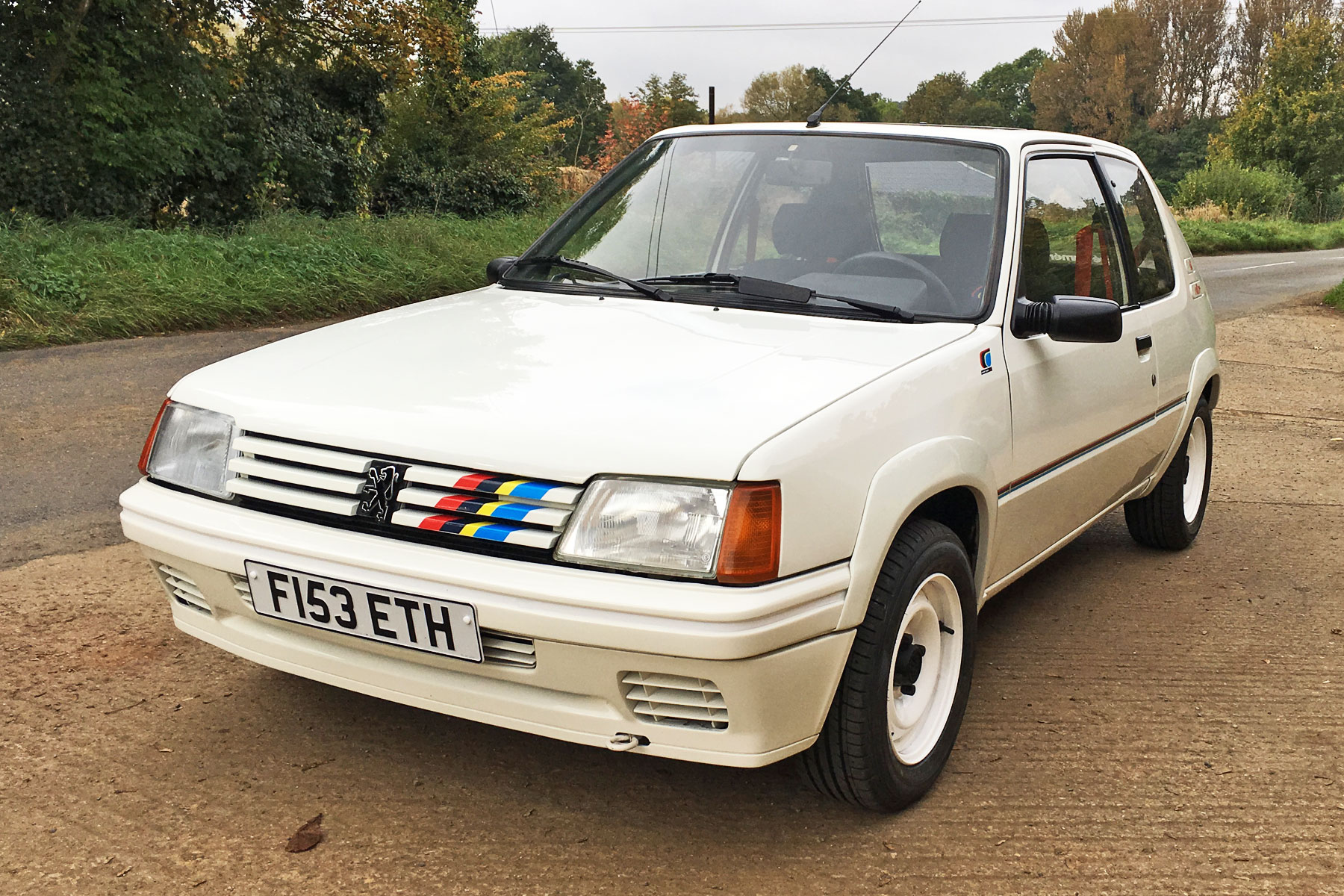 This is a forgotten hot hatch gem, that’s for sure. But you can be forgiven for forgetting about the Peugeot 205 Rallye. Here in the UK, it was little more than a spiced-up 1.4-litre single-carb 205 XS, producing not a great deal of power and providing nowhere near the excitement of a GTI.

But the car we’re testing for this week’s Retro Road Test is the real McCoy. It’s a European-spec LHD version of the Rallye, boasting a kerb weight of just 794kg: a whole 100 kilos less than the GTI. And a decent amount of power, too… 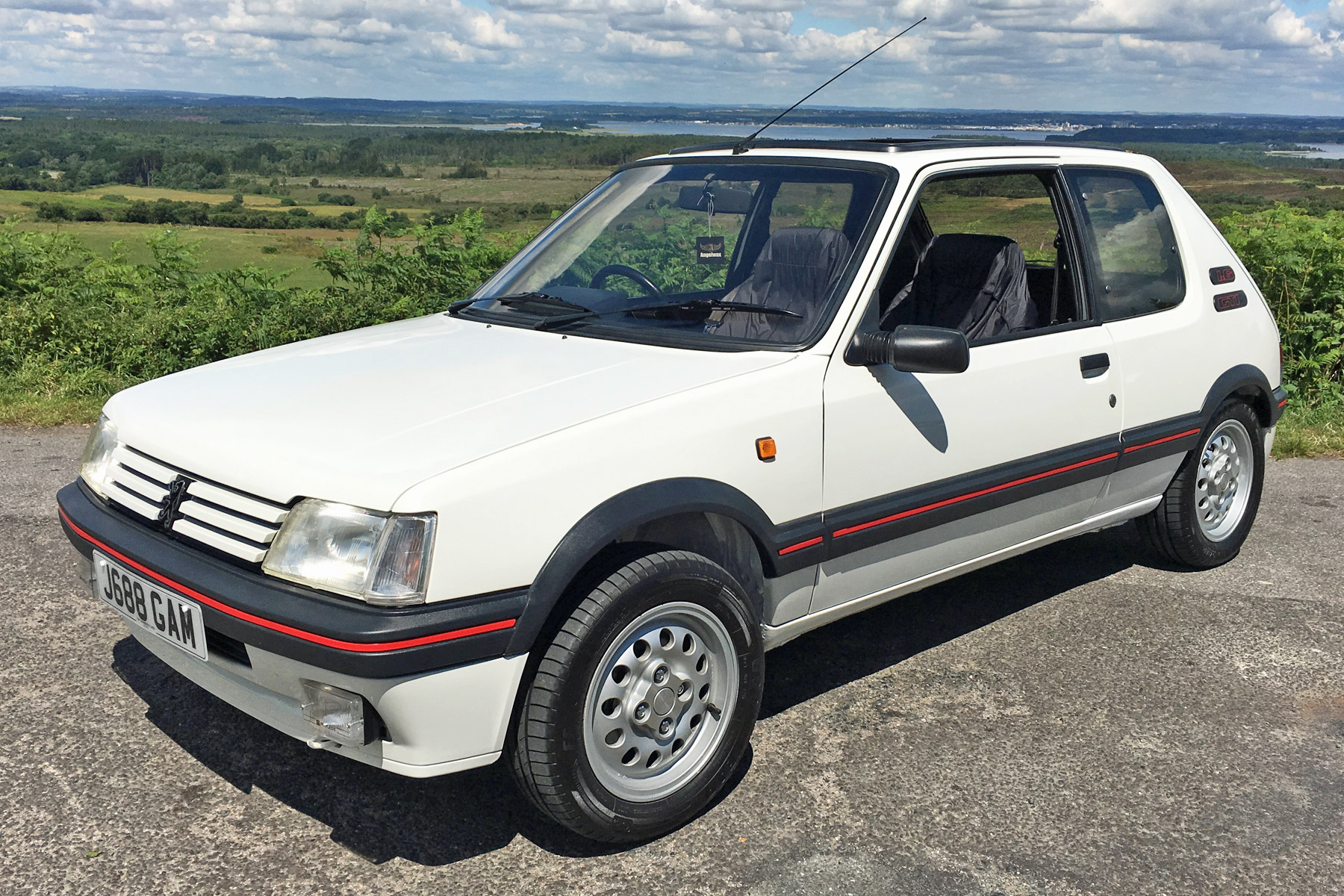 If quirky hot hatches are your thing, there’s no shortage of cars you should be considering. It’s a different character, but if you’re considering a 205 Rallye, you should definitely look at the more commonplace GTI. There’s also the newer – and again, more common – 106 Rallye, along with the hot Renault Clio Williams. The Citroen AX GT is a plucky little pocket rocket, while the much newer Suzuki Ignis Sport follows the Rallye’s ethos. 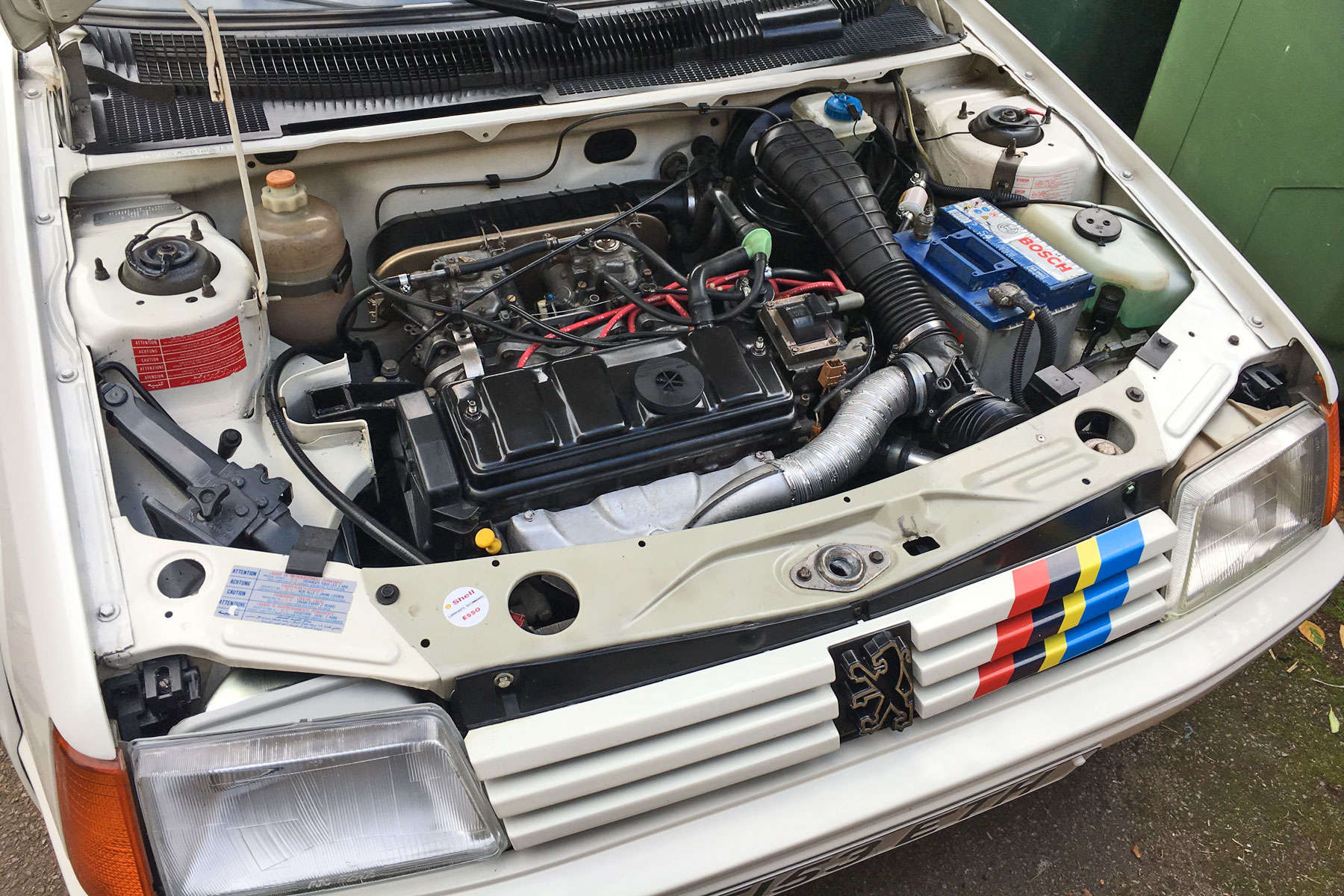 In European guise, the 205 Rallye dumps the lacklustre 1.4 in favour of a revvy twin-carb 1.3 producing 103hp – just 2hp short of the GTI when it was launched in 1984. Intended to compete in sub-1300cc rallying, the Rallye was a stripped-out homologation special. 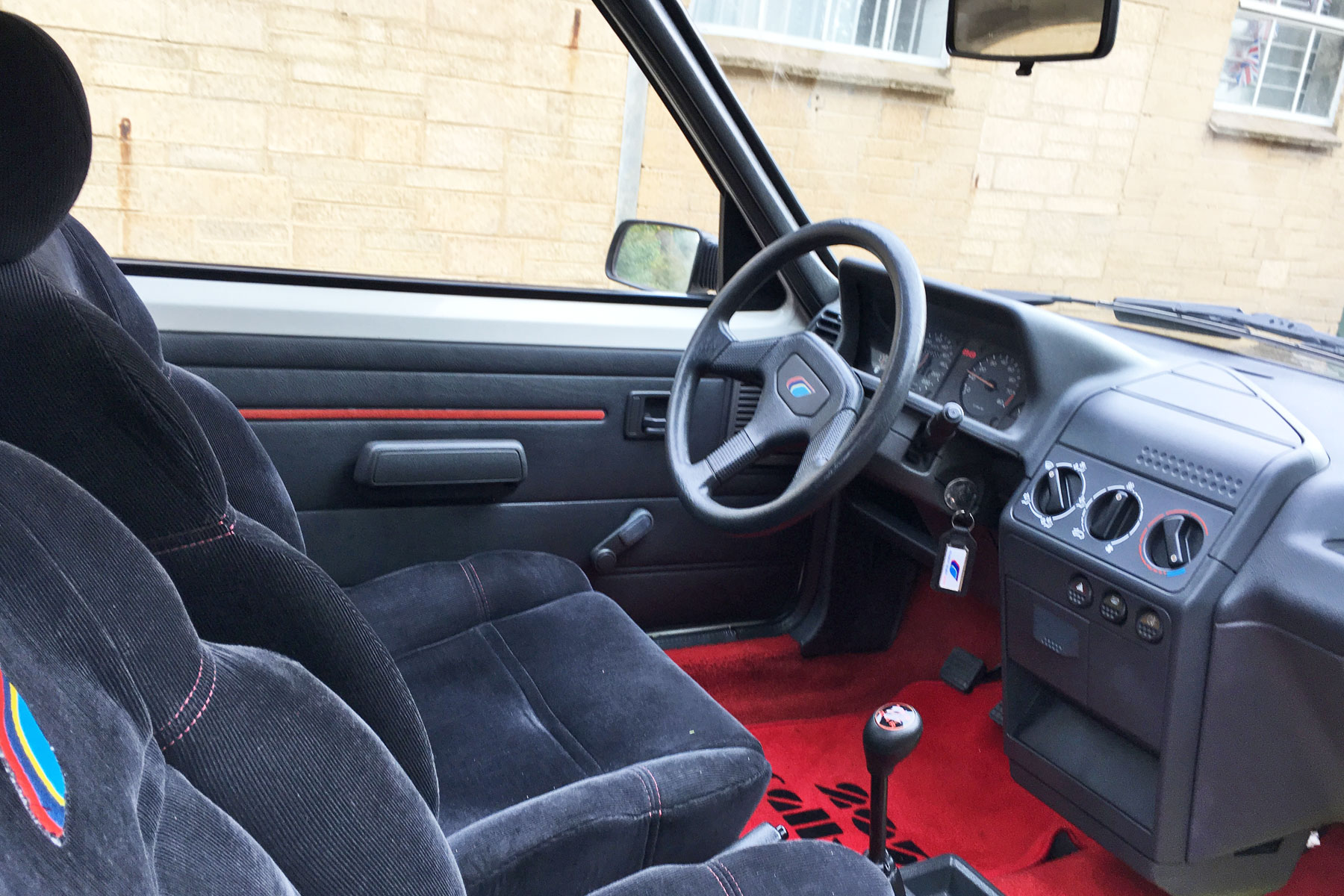 At first, honestly, a little disappointing. It’s an old French hatchback, and it feels it. The brakes take some prodding, the steering is heavy and the interior, red mats aside, feels relatively normal. And old. This is not a car for drivers seeking instant gratification.

But as the Rallye starts to warm up, and you start to get into the experience, it gradually becomes more rewarding. It’s well suited to tight, winding B-roads (out of its element on larger roads), and it responds well to enthusiastic front-drive driving. So, on the brakes in a straight line before the bend, powering through and – whatever you do – don’t lift off. Not that it’s as snappy as the GTI.

The analogue steering is infinitely more communicative than the electrical systems fitted to today’s hot hatches. The performance, meanwhile, would probably be shown up by most modern turbodiesels but, once it’s warmed up, it’s fun to work it hard chasing the redline and staying below speed limits. 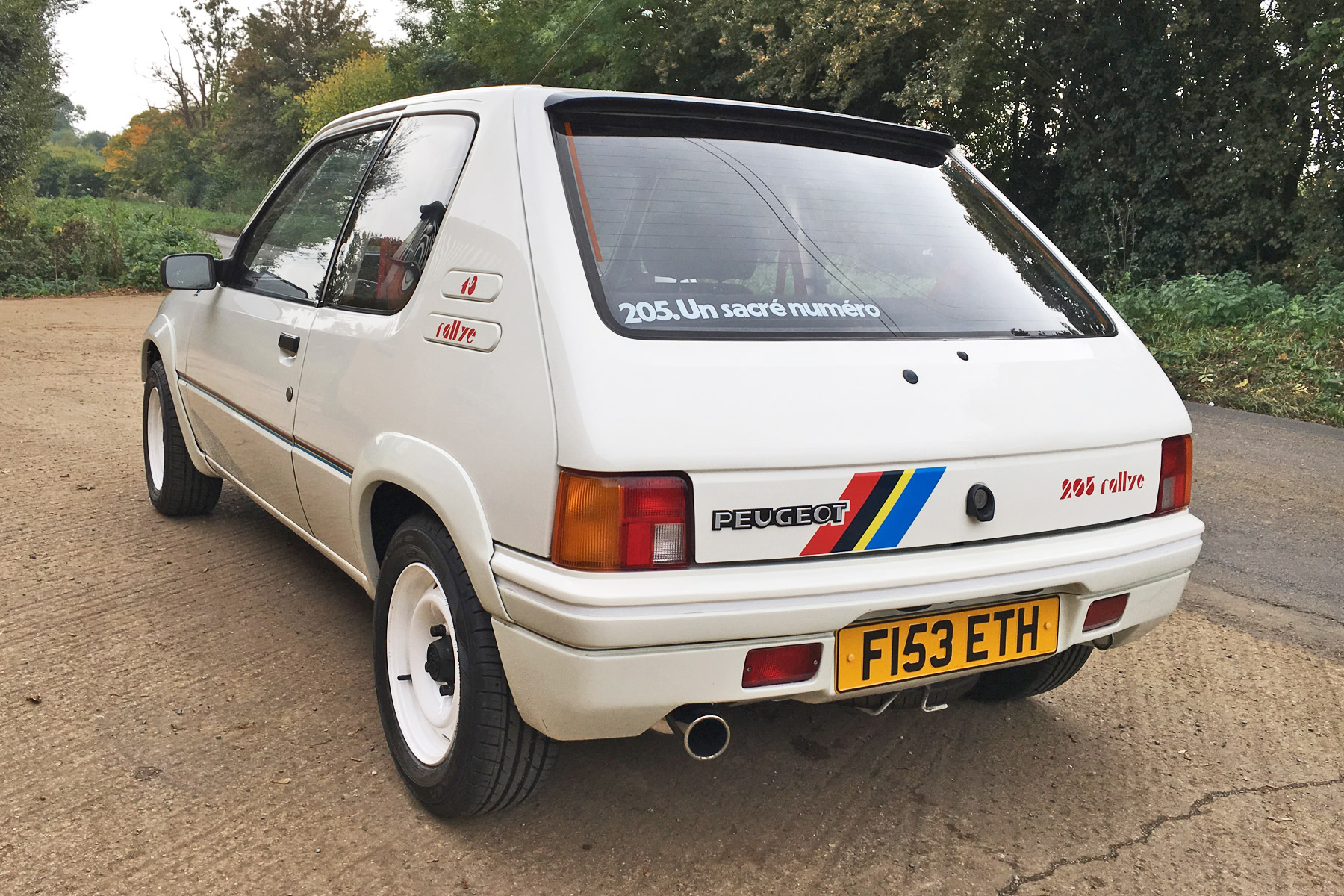 It’s an old French hot hatch so don’t expect it to be painless, although it’s a relatively simple car. Parts can be difficult to source – be prepared to join Peugeot clubs (there isn’t a dedicated 205 Rallye one in the UK, but there are plenty of more general ones) and fire up Google Translate in order to ship parts from abroad. 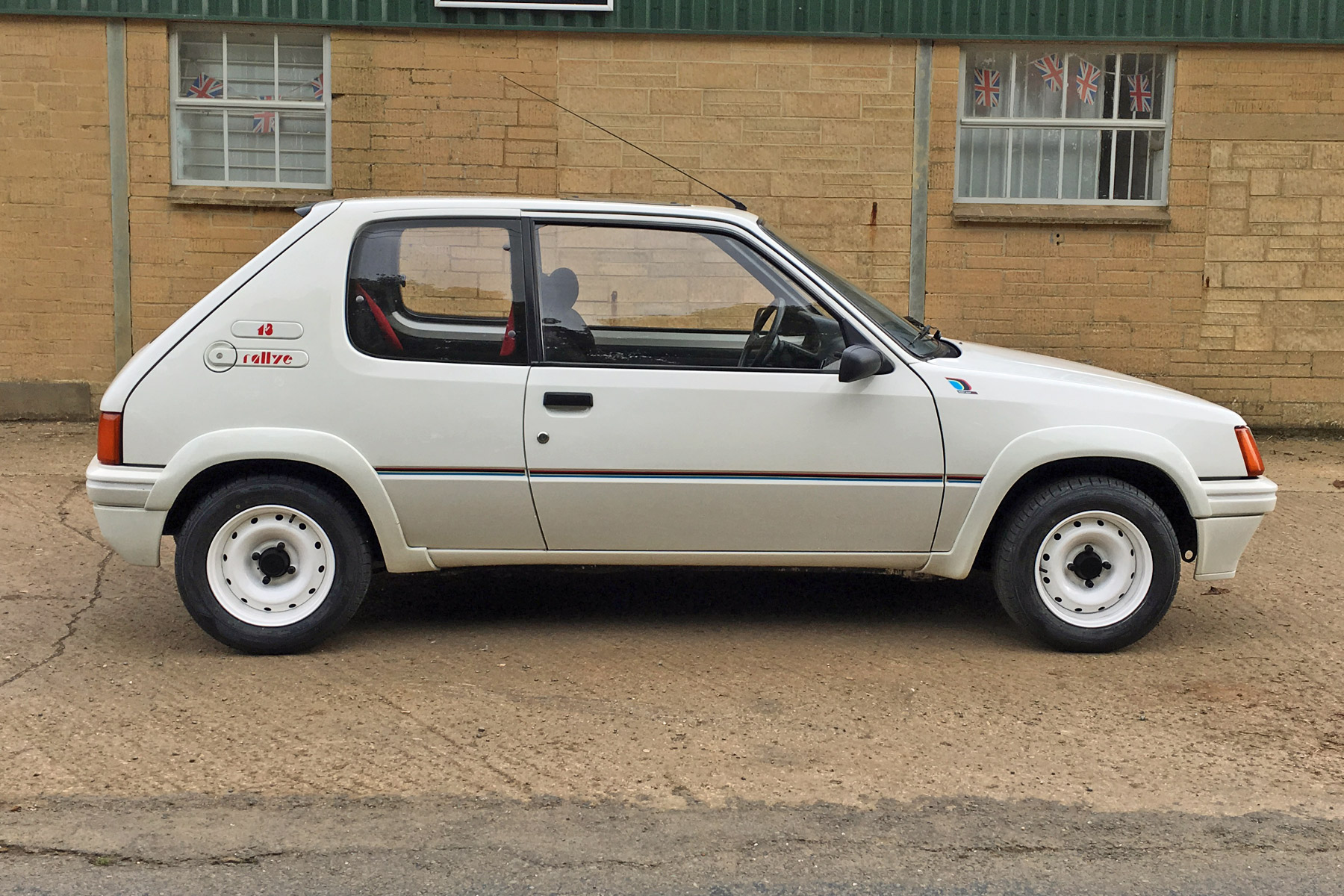 Cut and paste answer to almost every Retro Road Test we’ve done: you could, but you probably shouldn’t. It’s a rare car, especially in Euro-spec, and it’ll soon start to show its age if you did use one as a daily driver. Plus, the novelty of driving a left-hand-drive car without a radio and little in the way of creature comforts will soon wear thin. 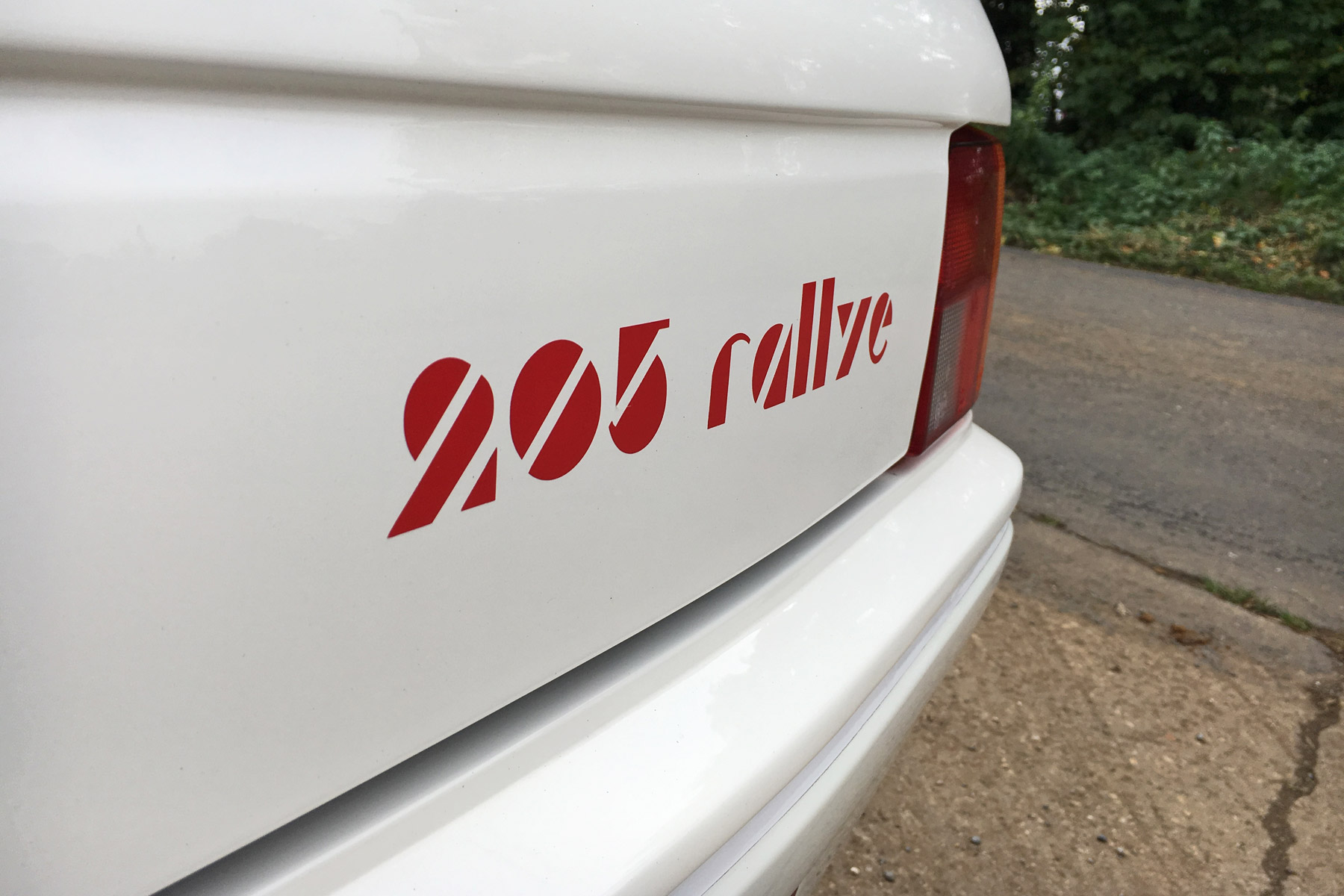 Finding one in the UK is difficult, so providing a solid valuation is tricky. If you can find a cared-for original example, the limit is essentially the maximum you feel comfortable paying for an old Peugeot hatchback.

We’d probably budget around £10,000 for a nice one, or £15,000 for a minter. But bear in mind the direction in which GTI prices are going. A Rallye could be a sound investment. 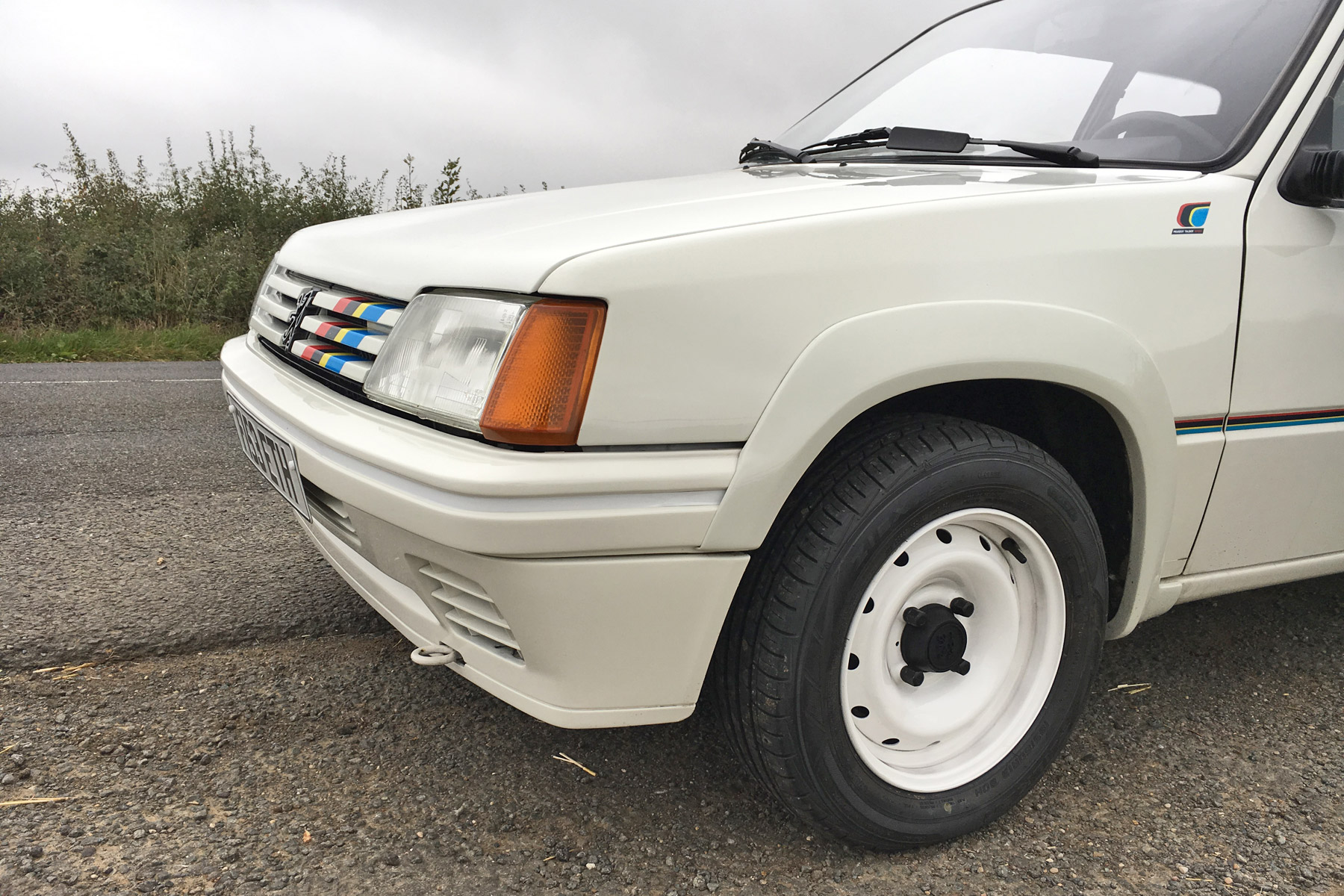 Signs of abuse and crash damage are the main concerns. Look under the bonnet: does all the paintwork look original? Are there any signs of repair?

Other than that, buy with your head rather than your heart. If you’ve been waiting a while for one to be advertised, it’s easy to dismiss minor faults – but bear in mind that even simple parts could be nigh-on impossible to find. 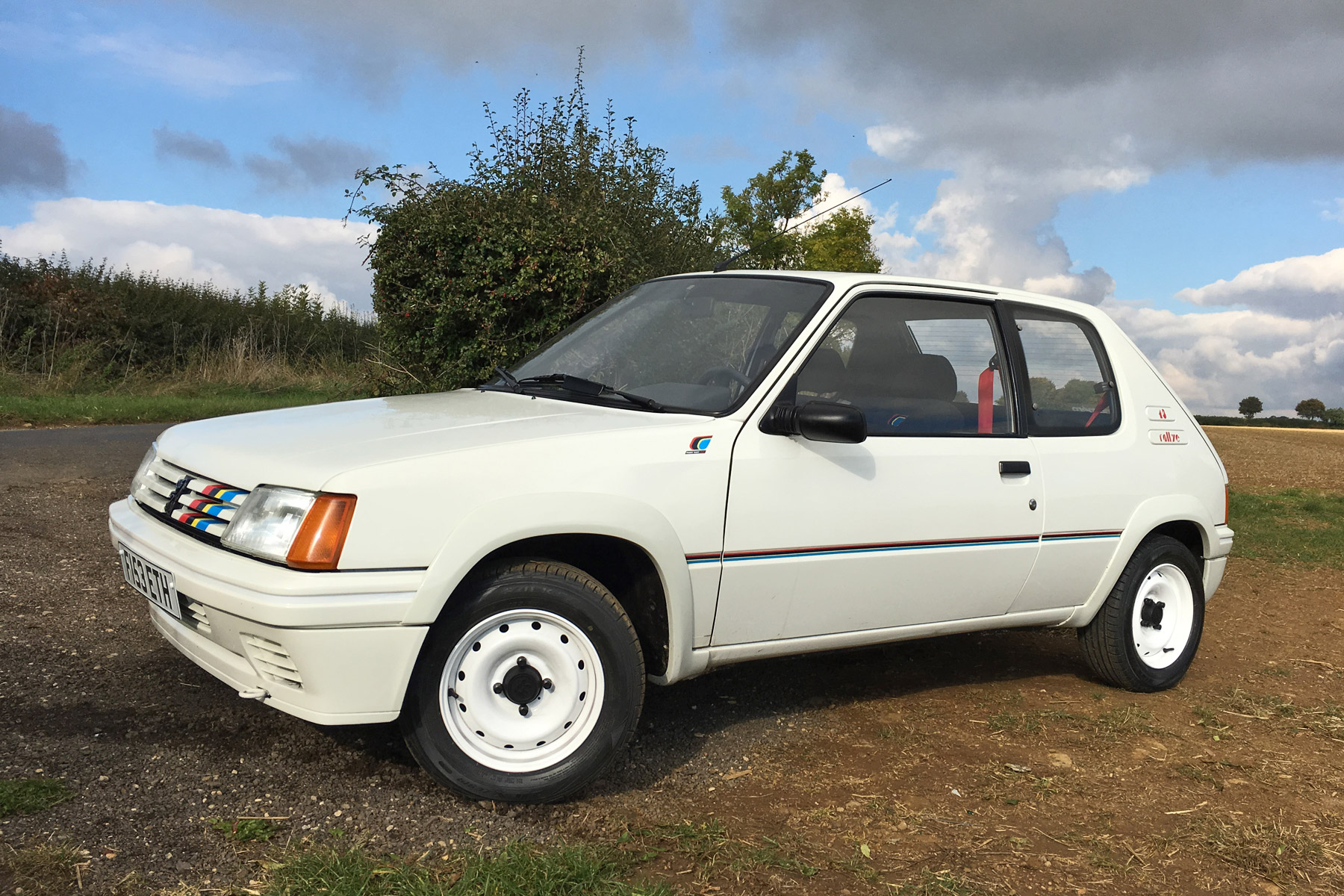 In truth, it makes more sense to go out and buy a GTI. They’ve got more of a following – so could be a wiser investment – while support through clubs and online forums is more readily available. It’s easy to find a good one, too, as long as you’re prepared to pay good money.

If the right 205 Rallye comes up, however, grab it, spend as much as you can keeping it tidy and original, and enjoy driving one of the best forgotten hot hatches that never officially made it to the UK. 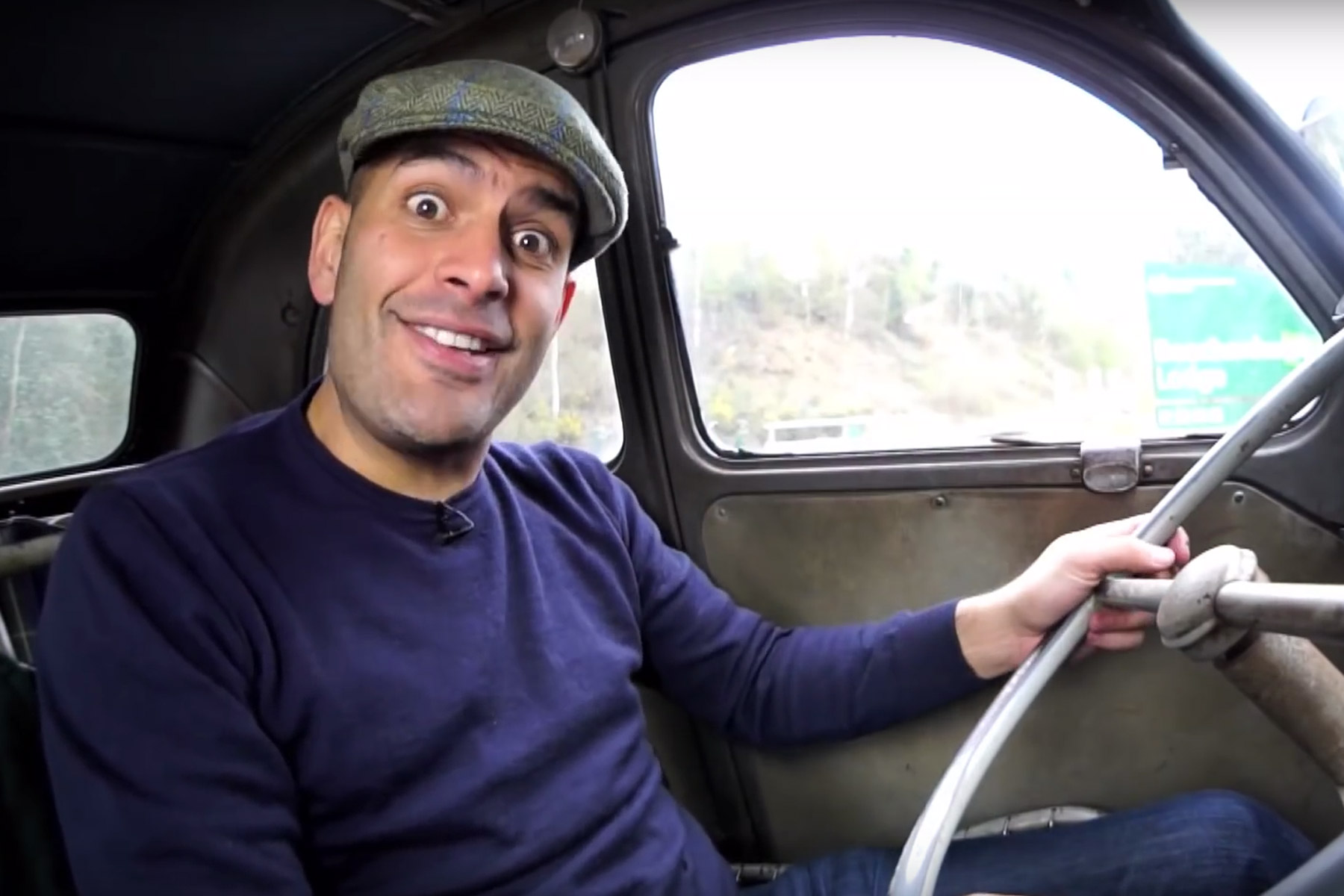 Top Gear’s Chris Harris bought a 205 Rallye last year. He described it as “every bit as special as an RS Porsche”, despite his slightly ropey example showing more than 300,000 miles on the clock and having been used as a tarmac rally car.