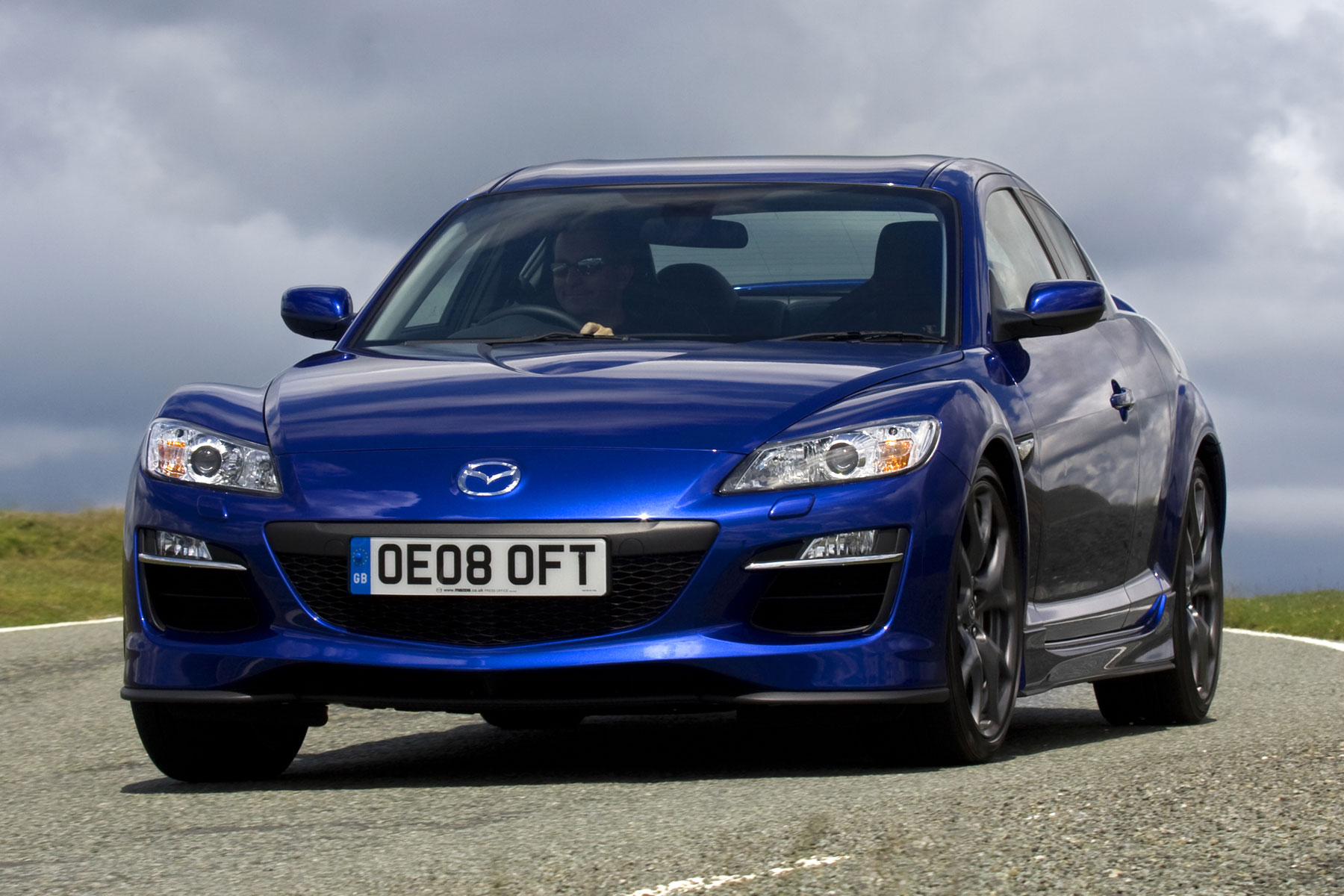 Launched in 2003, the RX-8 was a successor to the RX-7, cost less than £20,000 when new and can now be picked up for less than a grand. A quirky four-seat sports car with suicide rear-doors and a weird engine, it’s a very tempting proposition if you’re hunting the classifieds for something a little unusual.

So, should you buy a secondhand Mazda RX-8? We drove a late example around Goodwood’s famous race track to find out. 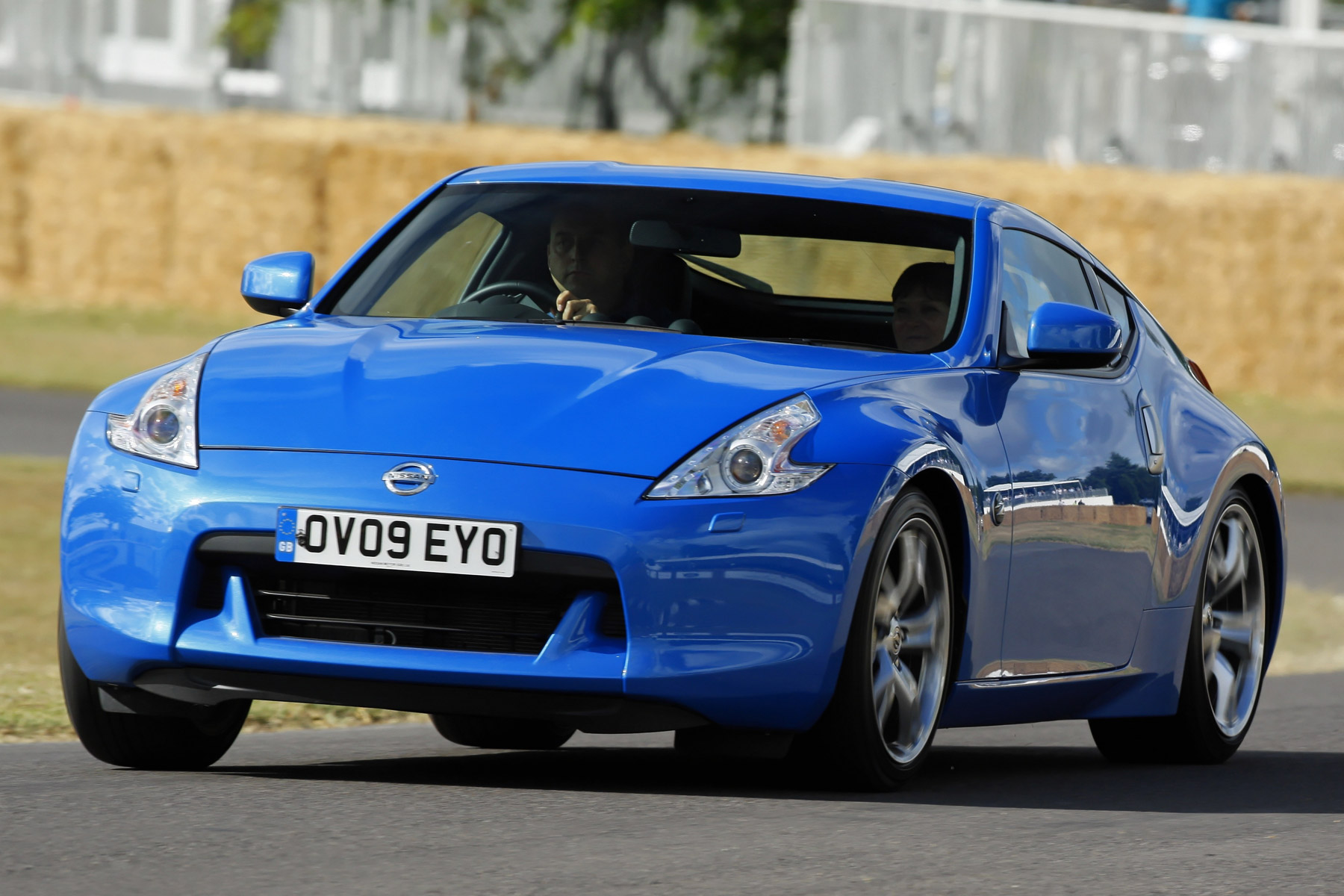 Rivals include the Audi TT and Nissan 370Z. The Audi is more premium (and more reliable – how boring), while the Nissan is faster but lacks the RX-8’s finesse in the handling department. And neither has doors that open backwards. 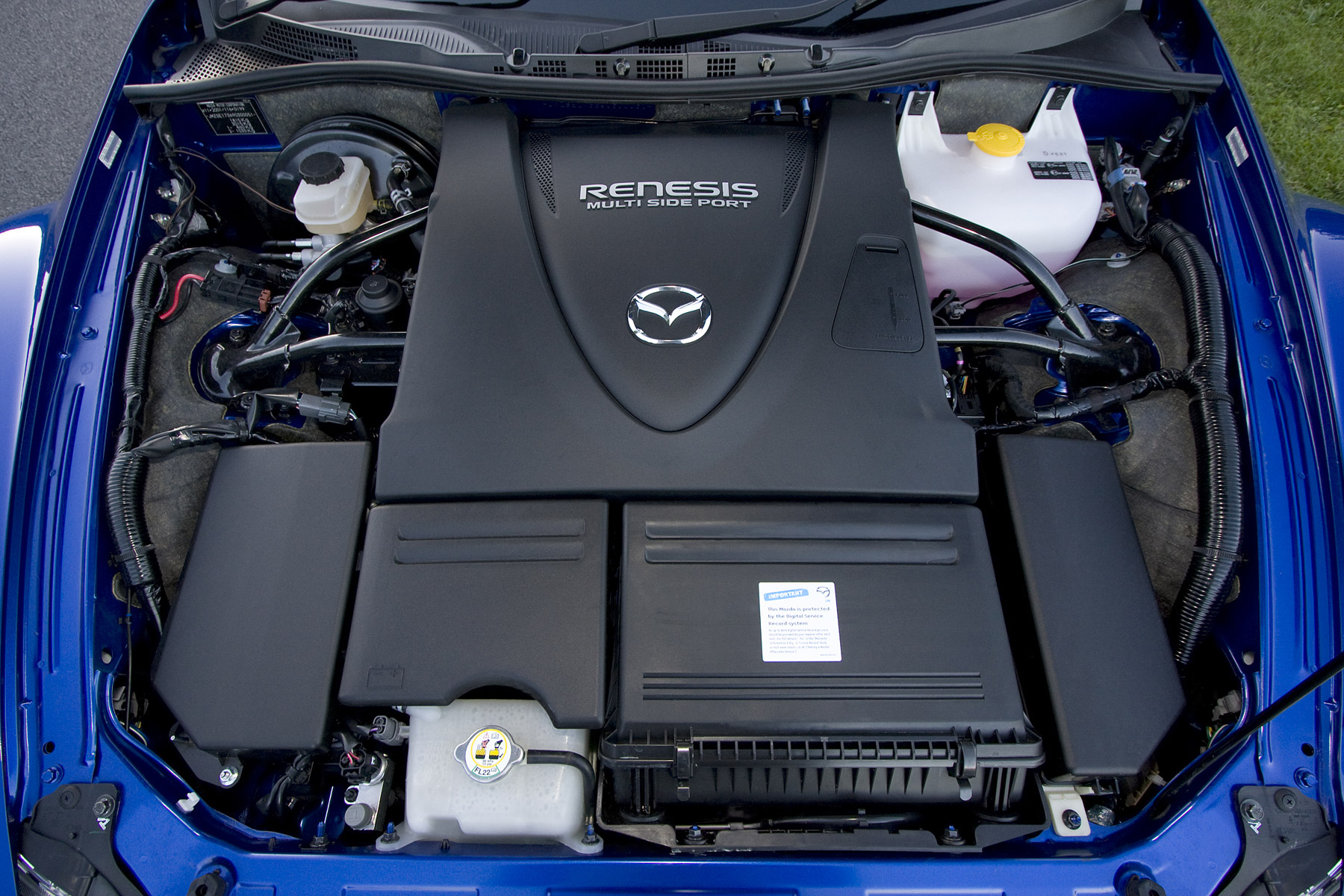 This is where things get really interesting. The RX-8 used a bizarre piston-less rotary engine, producing a generous amount of power (232hp in the model we’ve tested here) from its small 1.3-litre capacity. 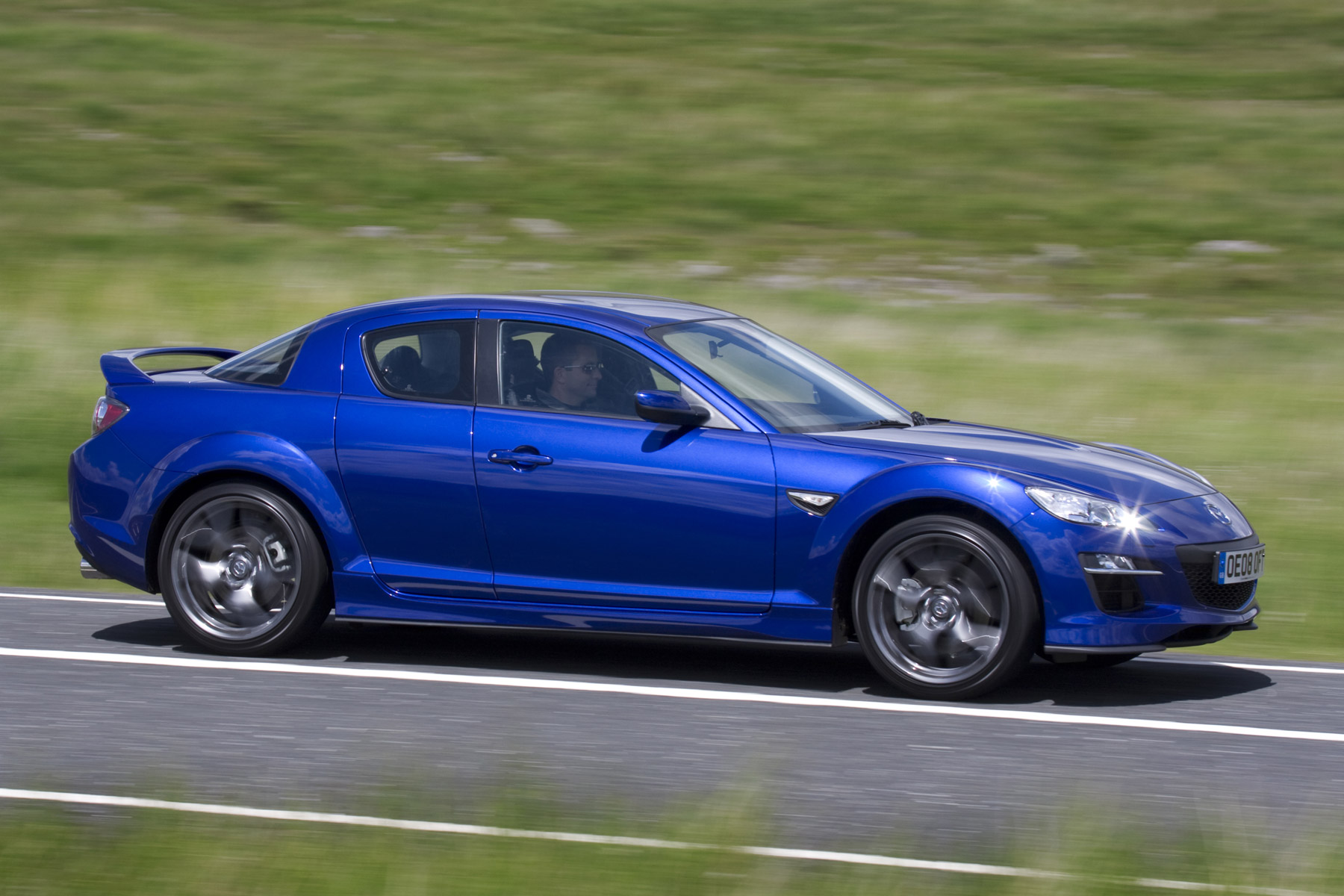 One of the biggest advantages of that rotary engine is its refinement. Today, in the age of downsizing and turbocharging, we associate small engines with poor refinement. But with the RX-8’s engine working in a rotational fashion, rather than thrusting pistons up and down, it’s beautifully smooth and refined.

It’s also quick – if you’re prepared to thrash it. Peak torque isn’t that peaky, just 156lb ft at 5,500 revs, but cling onto gears towards the 9,000rpm redline and you’ll be rewarded with a sports car that’ll hit 62mph in 6.4 seconds.

Mazda is good at manual gearboxes, so it’s no surprise to find the six-speed ’box in the RX-8 is slick to use. But if there’s one thing Mazda can do even better than manual gearboxes, it’s making a sports car handle well. It’s got years of experience with its MX-5, not to mention countless RX models, and the RX-8 has that winning combination of a tiny engine up-front, drive directed to the rear wheels and lovely, direct steering.

We drove it around a wet race track at Goodwood, and what a pleasure it was, the steering giving a spot-on indication of how much grip we had to play with. Meanwhile, the traction control reined in any sideways-ness caused by being clumsy with the throttle. 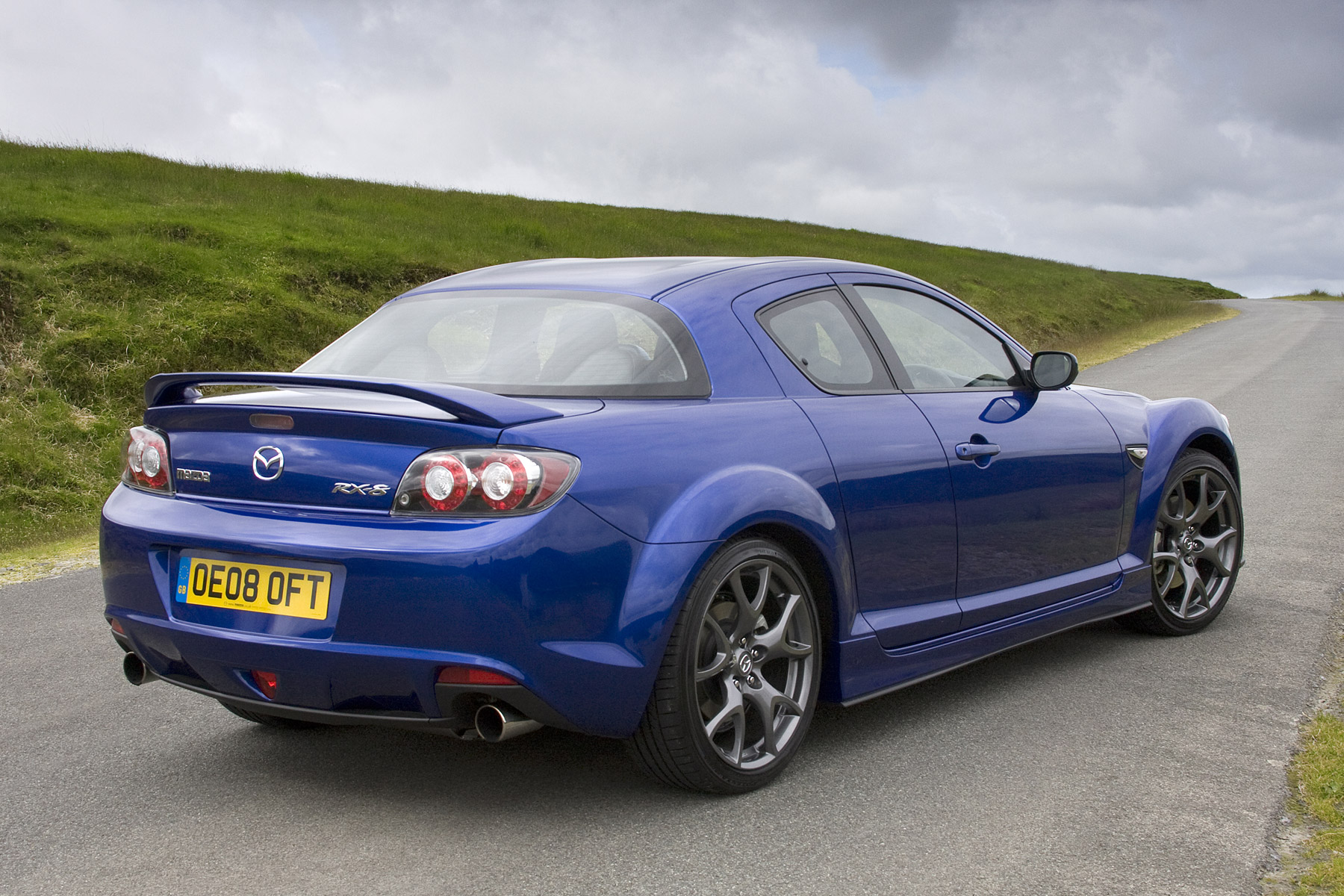 If the way the RX-8 drives is a huge plus-point for the diddy rotary engine, the way it empties your wallet spoils the fun somewhat. We’ll come onto common issues shortly, but before we go any further, we’ll look at day-to-day running costs. Officially, it’ll return 24.6mpg, but consider any day where you achieve more than teens to be a good day. It’s not a sensible low-revving diesel.

Insurance can be a bit expensive (repairing a smashed one using parts from Japan isn’t cheap), and tax will set you back more than £500 if you go for a post-2006 model. Ouch. 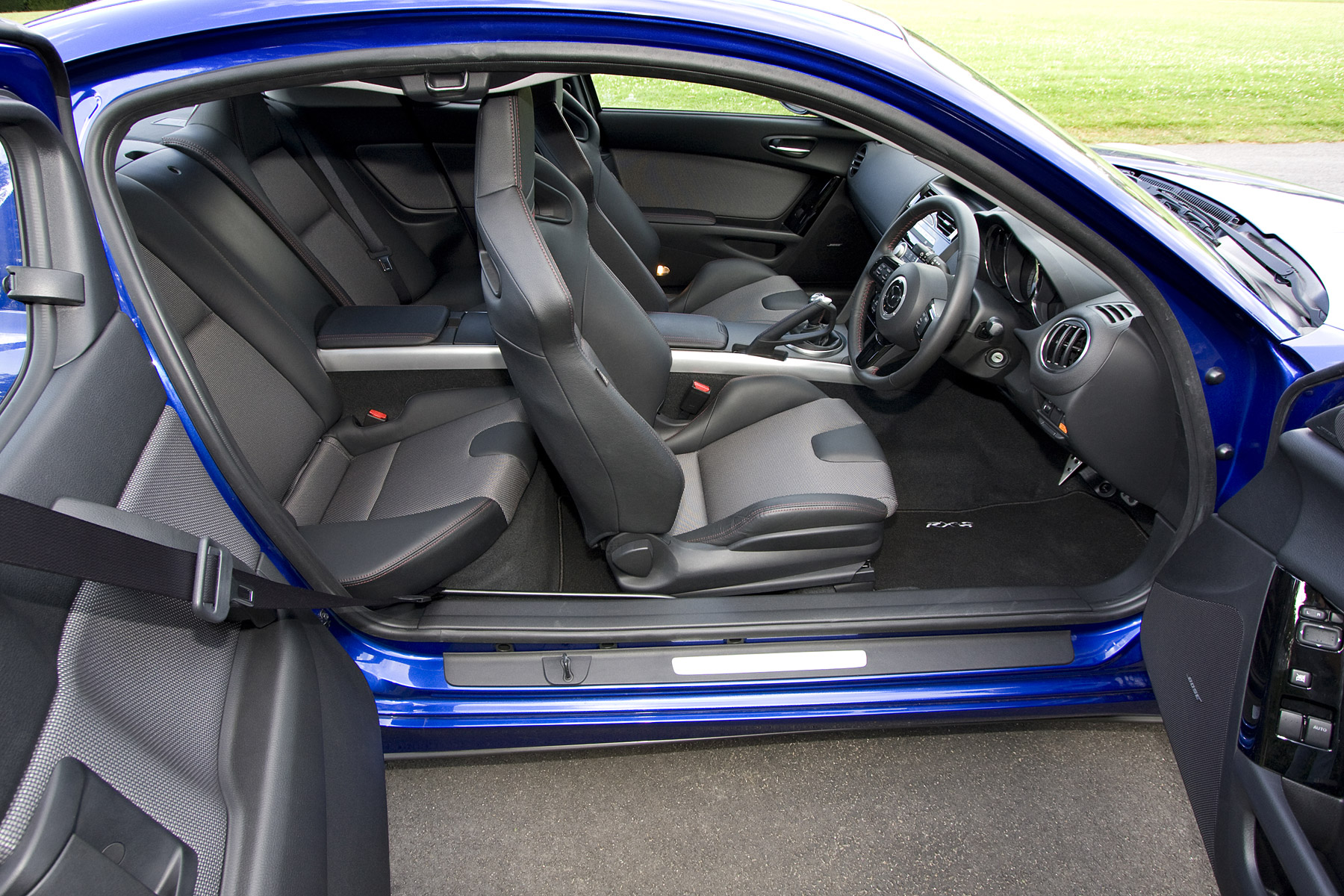 If you can afford the running costs, the RX-8 would be a lovely car to drive every day. Thanks to those quirky rear doors, it’s surprisingly practical; getting in and out of the rear is easy enough, and even full-sized adults will fit in the back with few complaints.

Our high-spec RX-8 featured Alcantara seats, a Bose sound system and climate control. The latest RX-8s are just six years old so, provided you’re prepared to look after it, there’s no reason why you shouldn’t drive one every day. 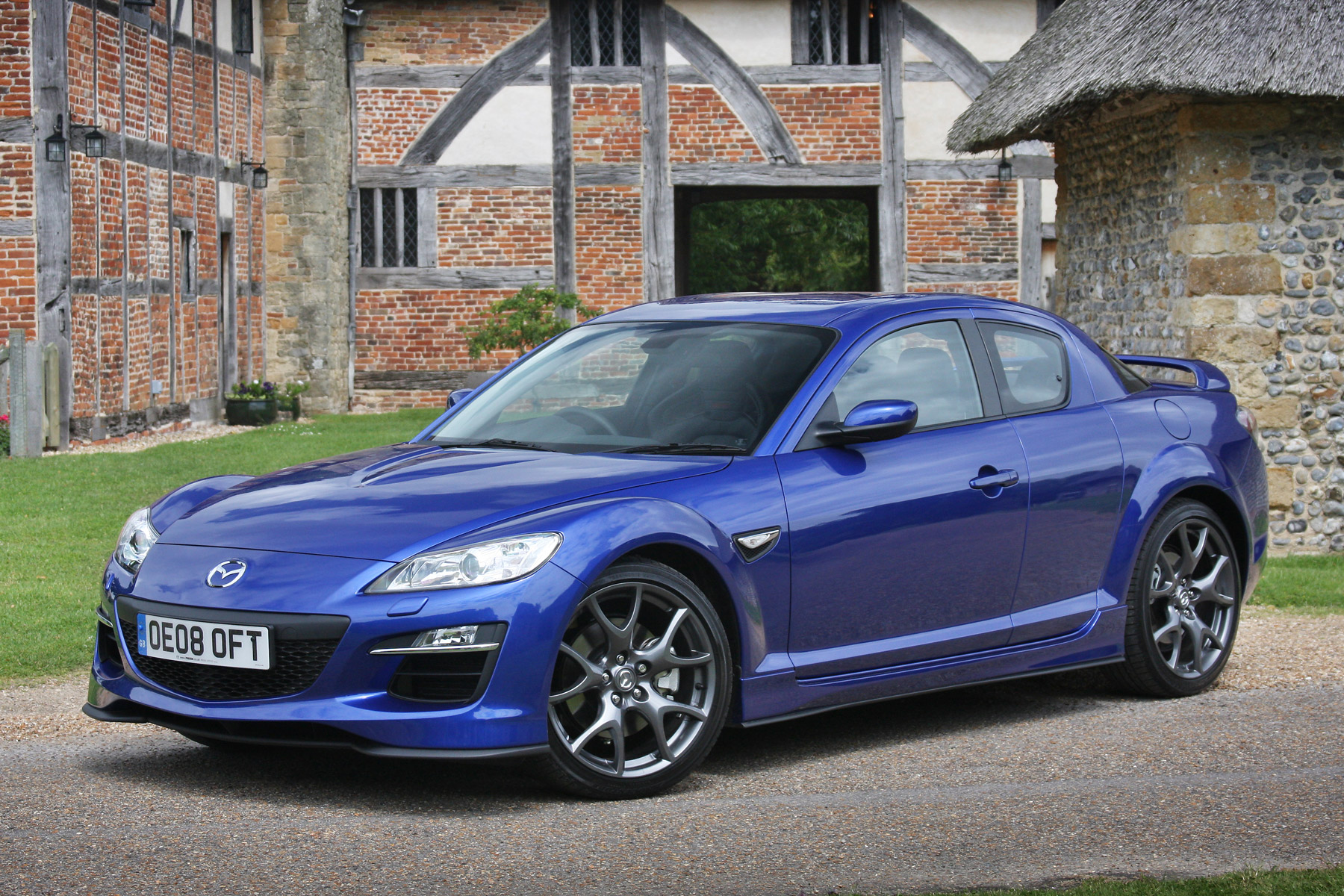 While there are, incredibly, £500 RX-8s out there, we often suggest ‘pay as much as you can afford’ as a good rule of thumb. A tidy example that’s covered low miles and been owned by an enthusiast will be well worth the extra money over an abused example. A £7,000 budget will get you one of the best in the country, sold by a specialist – but you should be able to find a good one for £4,000.

Another approach is to buy a cheap one with a broken engine from an honest seller. An engine rebuild from a specialist costs in the region of £3,000 and could be a surprisingly economical way of making sure you’ve bought a good example. 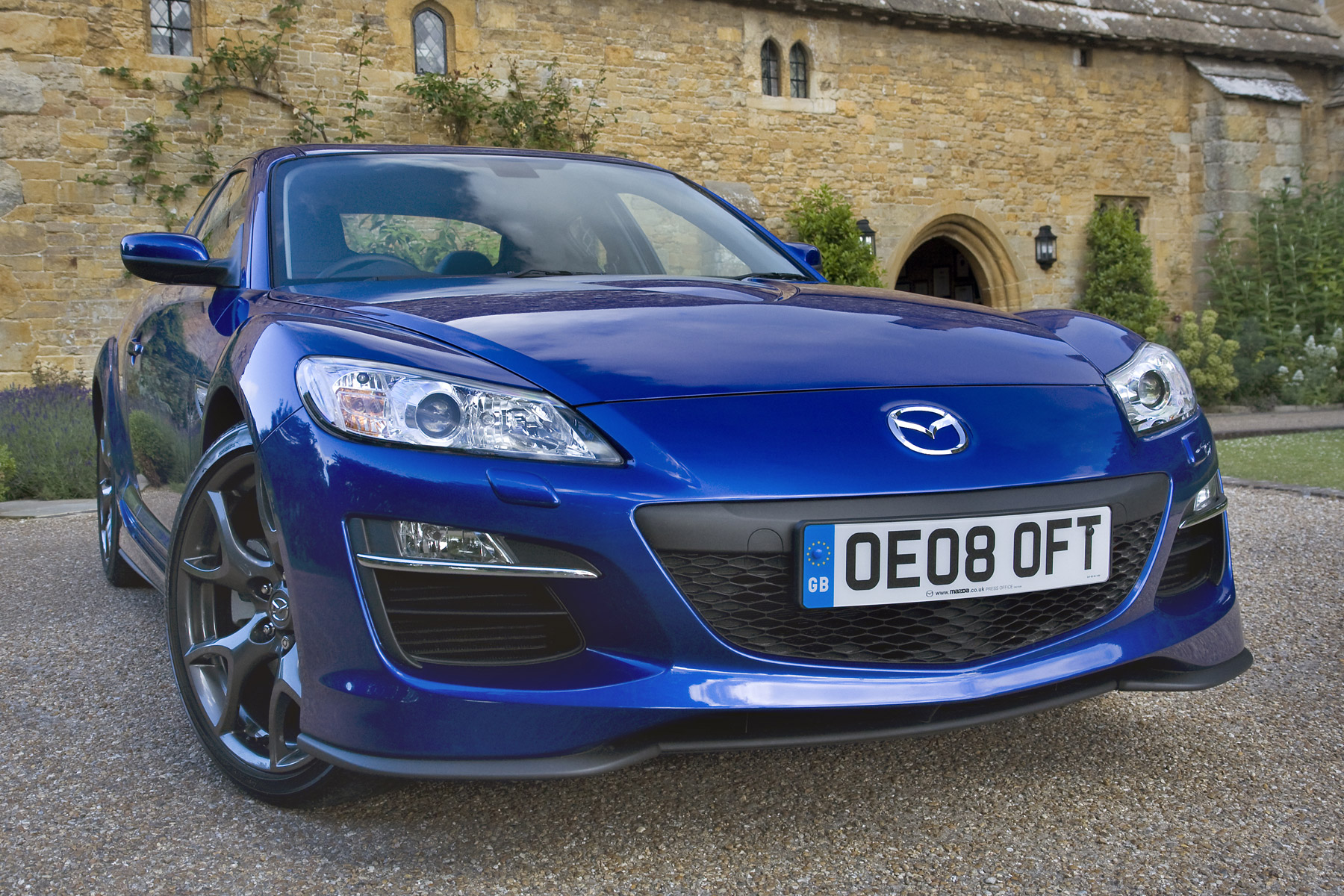 The first question you should ask is how often the oil level has been checked. The official advice from Mazda is to check the oil after every second fill of the fuel tank. Officially, it’ll get through 250ml of oil for every 1,000 miles, but specialists say good examples will use less. A thrashed example can get through oil at an alarming rate, and should be avoided.

When the engine’s running, listen out for unusual noises. A persistent droning noise or a loud clatter could be the sign of stationary gear bearing failure, a relatively common issue that could require an engine rebuild.

Another critical issue with the RX-8 is the common hot-starting problem. On the test drive, attempt to restart the engine when it’s at normal operating temperature. It should start instantly. Many don’t, and some sellers put this down to a ‘quirk’ of the engine. It isn’t, and could signify expensive compression issues. 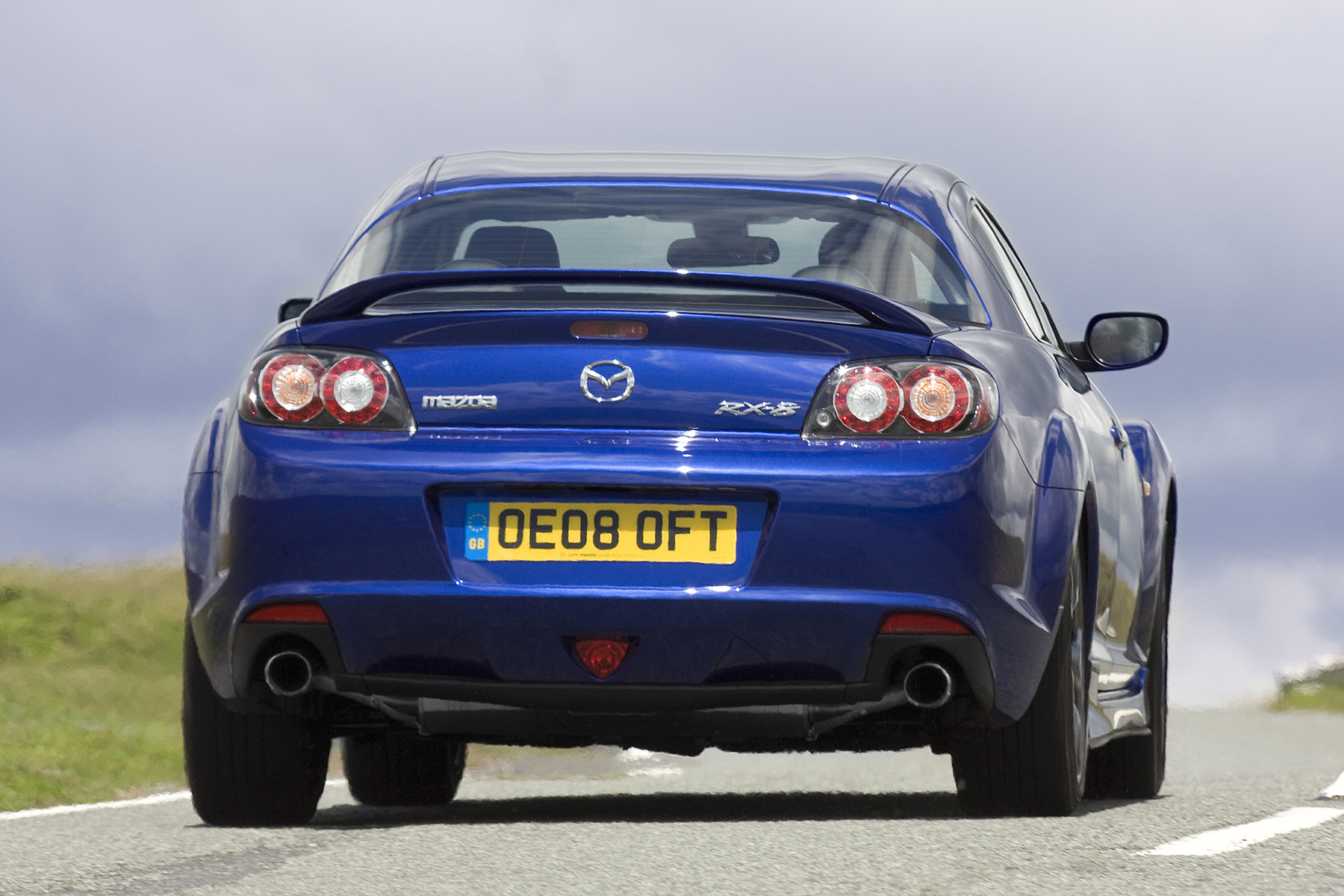 If you’ve got this far and haven’t been put off, we’ll assume you’re an enthusiast who will give an RX-8 the attention it needs. Buy one, but be fastidious about checking the oil. There’s an excellent support network out there for the RX-8… join forums, speak to owners and have a couple of grand set aside for work at a specialist.

If you buy a good RX-8, and look after it, it’ll be an enjoyable (and unusual) car to own. 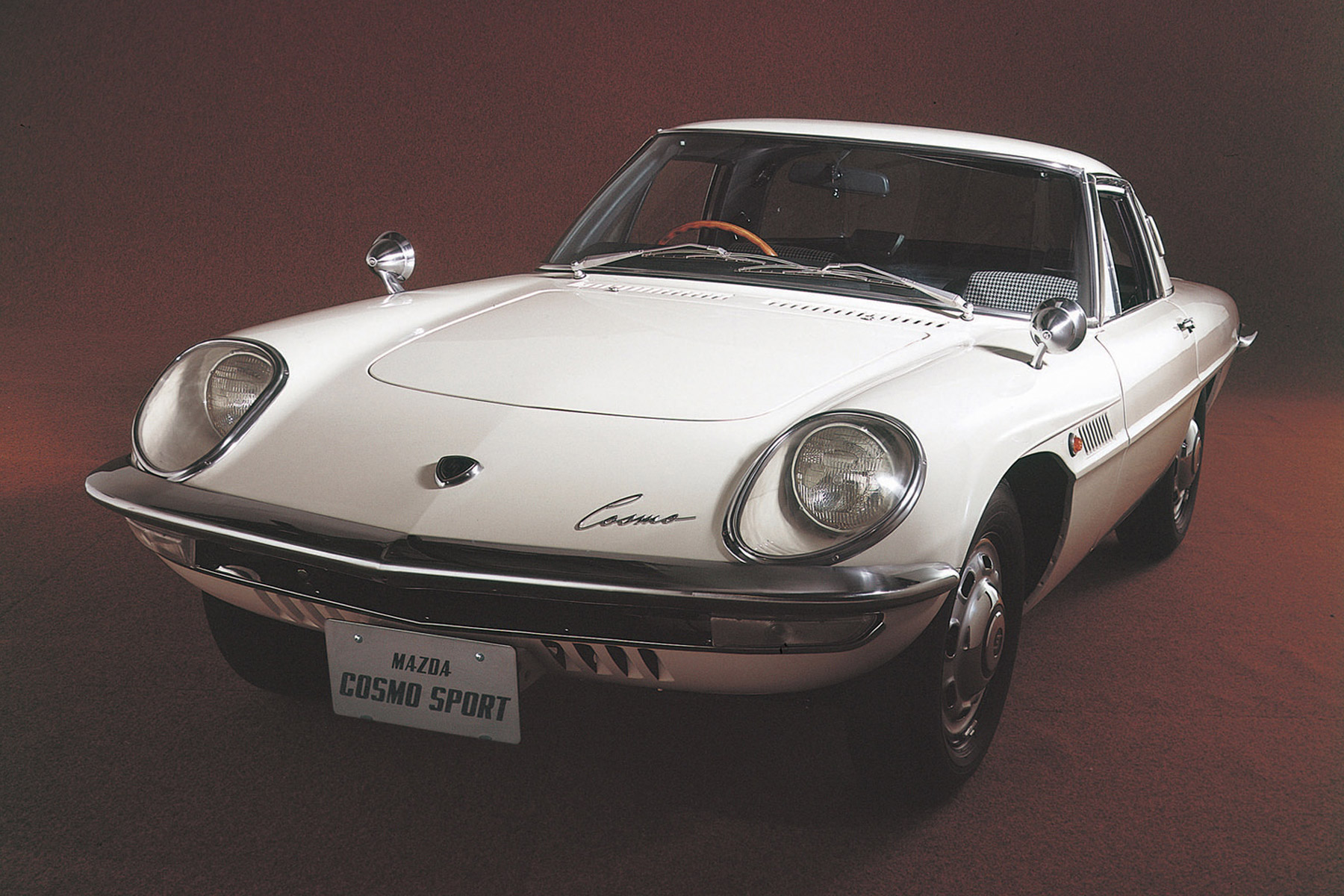 The rotary engine was designed by a German engineer, Felix Wankel. He’s thought to have had the idea at a very young age, as at the age of 17 he reportedly told friends he’d invented “a new type of engine, half turbine, half reciprocating”.

Mazda stuck with the rotary engine for 45 years, starting with the 1967 Cosmo, and ending when the RX-8 was axed due to increasingly stringent emissions regulations in 2012.