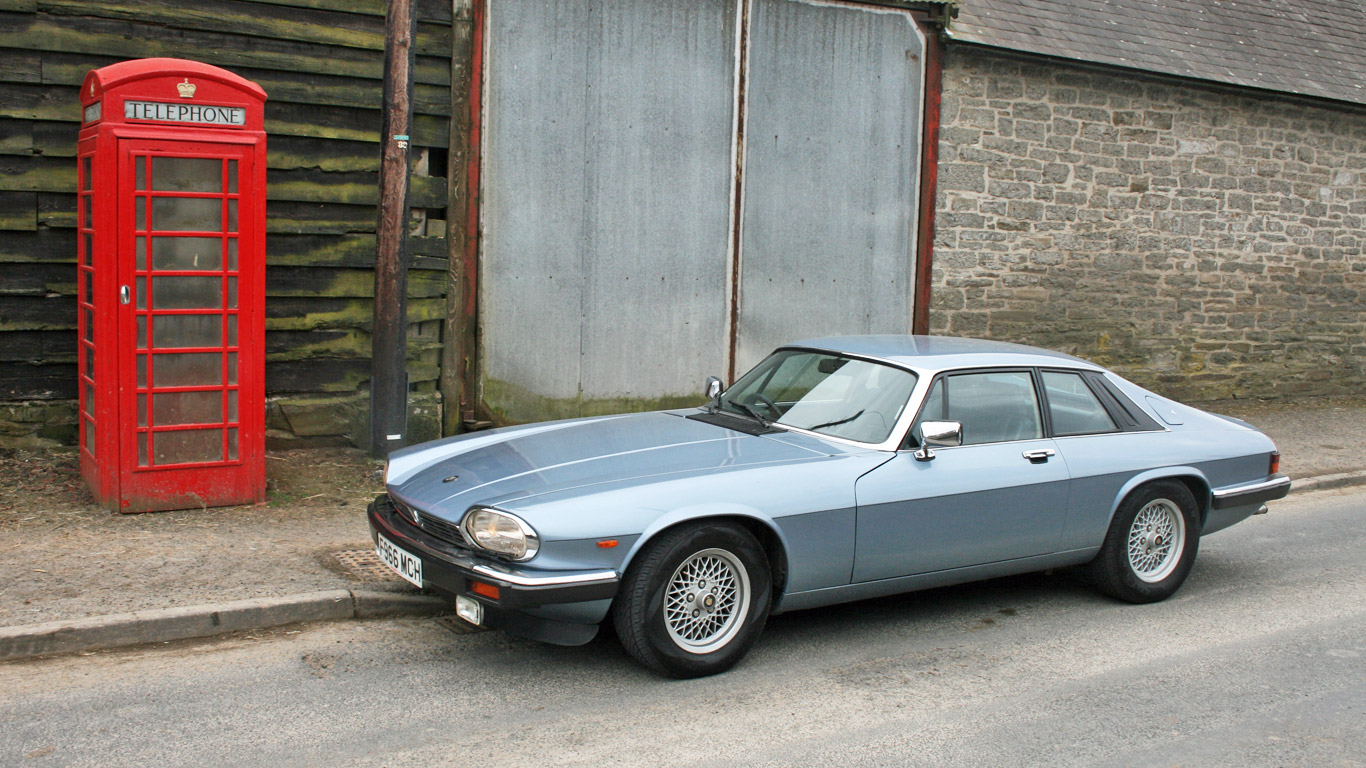 This was the last Jaguar created under the watchful eyes of design legend Malcolm Sayer and ‘Mr Jaguar’ Sir William Lyons. This pair oversaw the creation of the E-Type – ‘the most beautiful car ever made’ (Enzo Ferrari’s words, no less). Yet the XJ-S, the E-Type’s replacement, didn’t have quite the same welcome.

This was a car described as ‘controversial’ at best, ‘downright ugly’ at worst. Some blamed US legislation, but the simple truth is that Jaguar thought buyers were moving away from outright sports cars such as the now-aging E-Type, and into cross-country tourers. After all, motorways were now a thing, and the increasing popularity of cross-channel ferries meant people were more likely to take their cars across to Europe.

The result? A quick (if not sporting) four-seater with wonderfully opulent leather seats and enough wood to build a fort. Although unappealingat the time (particularly as it was launched in the wake of the fuel crisis, and demand for thirsty V12 grand tourers was low), we reckon it’s aged rather well. Firming prices suggest we’re not alone in giving the XJ-S more than just a passing interest.

Many thanks to Great Escape Cars for loaning us this XJ-S, which is available to hire.

The move away from the open-top sports car dynamics that made the E-Type so popular was a result of Jaguar attempting to predict 80s trends and head off competition from Germany. This period saw no shortage of luxury coupes coming out of Deutschland – and a customer considering an XJ-S the year ‘ours’ was built (1988) would also have been likely to consider a late E24 BMW 6 Series (probably in hot M635 CSi form) as well as a Mercedes-Benz W124 coupe, or even a Porsche 928.

Great Escape’s Jaguar XJ-S is powered by a constant in the model’s 20-year lifespan – Jag’s 5.3-litre V12. By 1988, it was the HE (high-efficiency) version of the V12, while later cars were available with the same engine bored out to 6.0-litres. A straight-six was also available.

In the form reviewed here, the V12 Jaguar XJ-S produced 295hp that, in road tests at the time, was found to accelerate to 60mph in 7.5 seconds and return early-teens MPG figures.

It’s not a sports car, but even by today’s standards it feels fairly quick. The benchmark 62mph comes in less than 7.0 seconds, and it’s good for a top speed of more than 150mph. That was supercar performance back then.

You sit low down, in a rather cramped interior (especially for the car’s relatively bulky dimensions), looking out over a long bonnet. Move the slightly bizarre, very 1970s gear selector into ‘D’ and enjoy the burble of the V12 as the car edges forward. It’s a surprisingly easy car to drive around town – visibility aside. Manuals are rare (only available in the early days as the gearboxes were left over from the E-Type), and being an automatic suits the XJ-S. The first thing you notice when maneuvering is how exceptionally light its steering is. This is perhaps an American influence, and arguably makes sense in a car obviously designed to make life easy for the driver.

Up the speed, and the steering doesn’t get any heavier. We’re used to light, lifeless steering in modern cars, but this takes it to another level. We’d love some sort of feedback and just a bit of heft – exactly as you’d expect from a V12 Jaaaag. But it just doesn’t come and, although it’s a cliche, threading the XJ-S along B-roads in a hurry is a bit like trying to hoon a canal boat. It’s kind of fun, but rather unnerving.

Steering aside, the XJ-S is a lovely car to drive. The V12 burble doesn’t get boring, and there’s plenty of poke when overtaking opportunities arise (they will, regularly). With disc brakes all round, it’ll stop as well as it goes, while the ride is a good balance between magic carpet and sportiness.

This is where things start to go wrong. Even when it was new, the XJ-S had a reputation for unreliability. One period review in CAR magazine described the XJ-S as ‘£20,000 worth of trouble’, and it’s not a reputation that’s improved with age. We’ll cover more on what to look out for below, but essentially be prepared to spend money keeping the V12 in tip-top condition, and be wary of rusty examples.

It’s not all bad news. There are plenty of Jaguar specialists out there to relieve you of cash when the inevitable happens, and the 15mpg (if you’re lucky) fuel economy means you probably won’t do many miles, reducing the chance of a breakdown. Specialist insurance should be reasonable, too – despite its performance, it’s not exactly a boy racer’s car.

That brings us onto the subject of using an XJ-S as a daily driver. You certainly could use it every day. When it’s not leaving you stranded, a well-sorted XJ-S is a lovely companion. The interior will spoil you in a way that even very expensive modern cars don’t. And remember, the XJ-S was in production as recently as 1996, so it’s not actually that old.

But should you use an XJ-S every day? It’s not a very good idea, unless you have AA platinum membership and a full-to-bursting bank account ready to keep your local specialist in business. But that’s the charm of an XJ-S – it makes for a lovely car to smoke around in at the weekend.

A few years ago, the unloved XJ-S could be picked up for a three-figure sum. But times are changing, and you’ll need to spend at least £4,000 for a useable example. We often advise buying the best example of a classic car you can find, but this is especially true for the XJ-S. Buy cheap and it could be a whole world of hassle. Pay more for a well-maintained example and hopefully it’ll prove to be a slightly more sensible purchase. Avoid examples that have barely been used in recent years – this is very much a car that could throw up problems if it’s shocked back into life.

The V12 engine needs looking after – regular servicing is a must, ideally at a specialist. It’ll break down for fun, and being such a large engine cramped into a small(ish) engine bay, it’s not easy to access for the DIY mechanic. Make sure it’s got a stack of paperwork to prove it’s been looked after, otherwise the engine could create a whole world of pain.

And that’s just V12 gremlins. As per most British cars of that age, rust can be an XJ-S killer. If you get to the stage of looking at one with a view to buying it, give it a thorough look all over. Check the jacking points, floorpans, wheelarches, where the wings meet the sills – and any areas where stainless steel (disguised as chrome) meets bodywork.

On the test drive, it’s pretty standard stuff – check it drives and brakes in a straight line. Worn bushes are a common, and it might be easier to factor in the cost of replacing them, rather than trying to find an XJ-S that drives perfectly.

You’ve got to go into Jaguar XJ-S ownership with your eyes open. It’s not something you should do on impulse, and something we’d struggle to recommend objectively. But it is the car from recent Retro Road Rests that got this particular reviewer searching the classifieds more than any other. It feels hugely special, and its reputation means they’re actually a bit of a bargain.

American health and safety legislation meant convertibles were expected to be banned, so it was 13 years into the life of the XJ-S before Jaguar introduced a soft-top version. Although aftermarket conversions were available earlier, the official XJ-S convertible arrived in 1988. It weighed 100kg more than the coupe and was only available with the V12 engine. It attracted criticism at the time from journalists who disliked how it drove, but buyers weren’t put off. By 1989, more than half of XJ-S sales were convertibles.