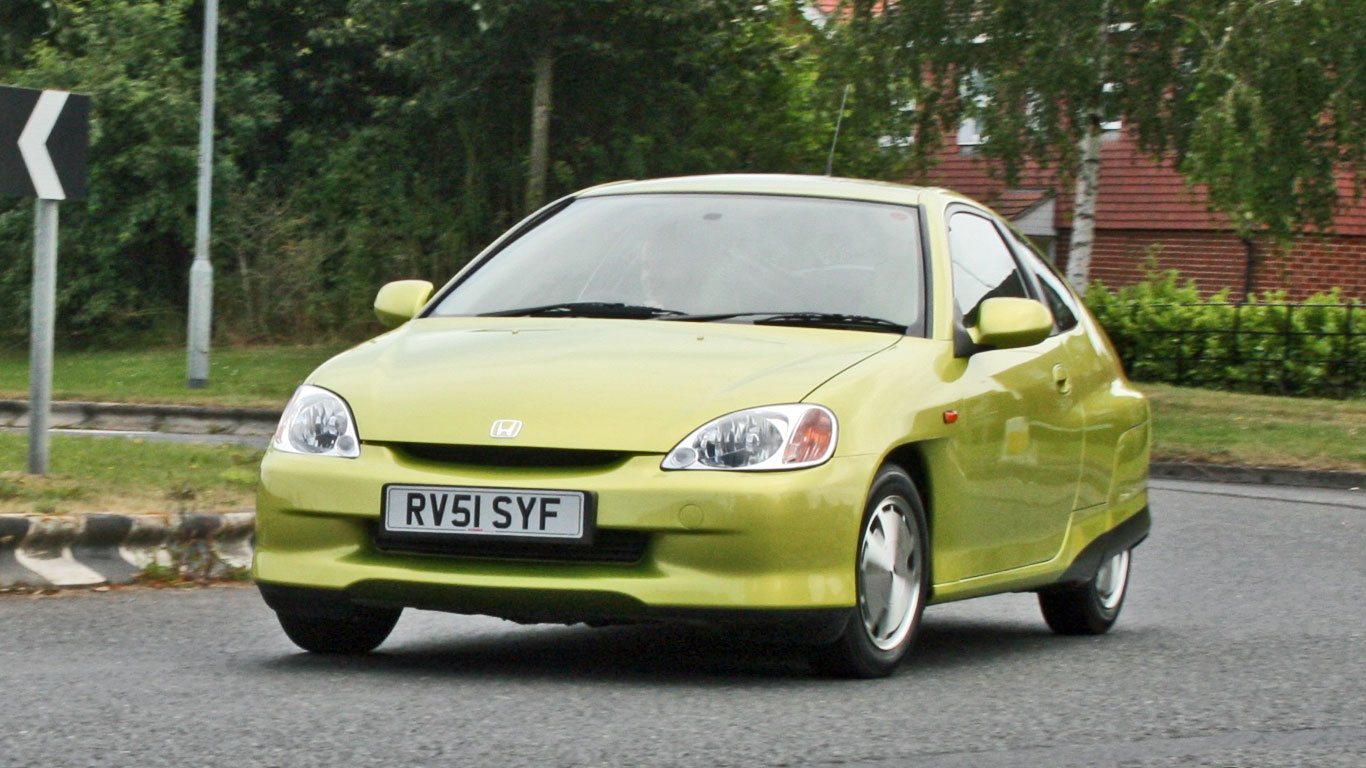 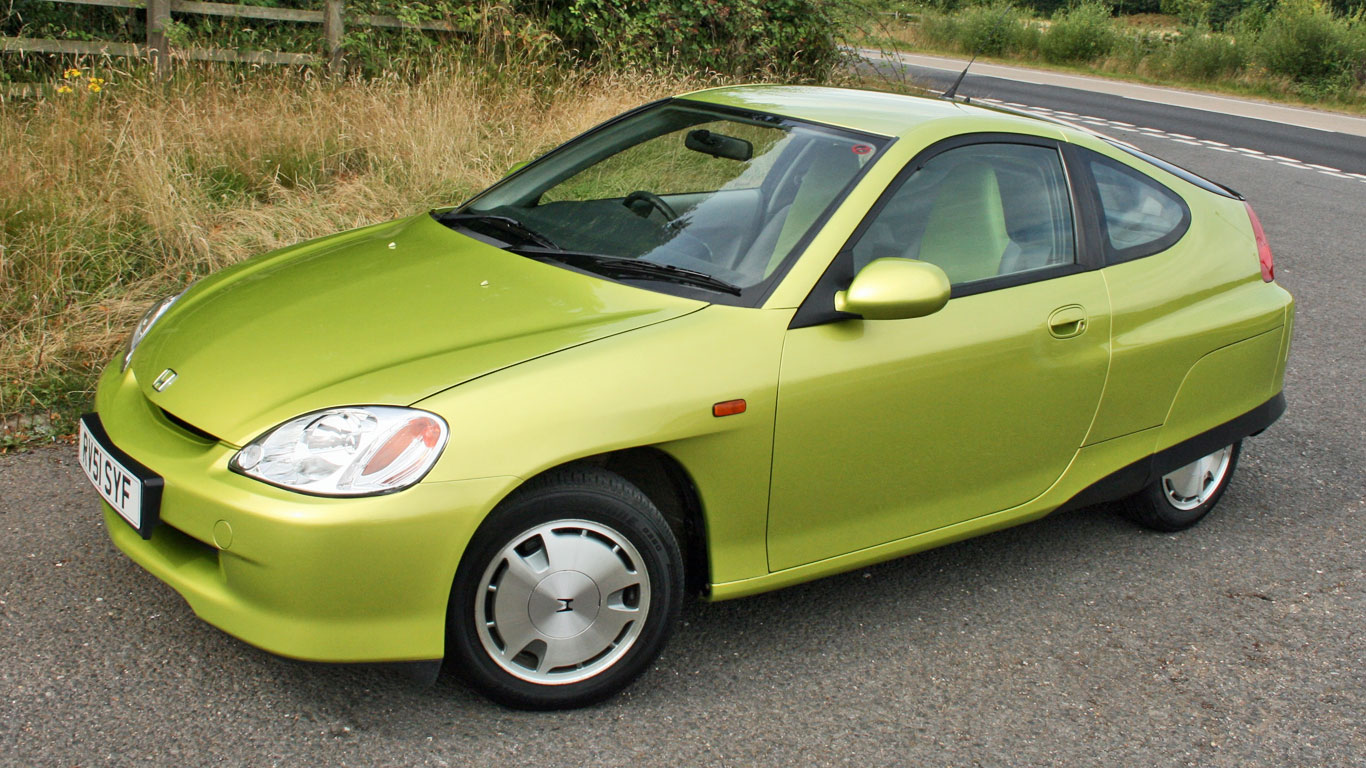 This is what environmentally-friendly motoring looked like in 1999. A car from a time before hybrids were commonplace, the Honda Insight would have looked at home on Tomorrow’s World. It boasted unheard-of fuel economy from its hybrid powertrain, along with futuristic looks. But that was kind of its downfall…

At the same time, Toyota was launching the more conventional hybrid Prius… and that’s still around today. The Prius boasted five seats, a useable boot and looked a little more normal. Car buyers liked that.

Eco-friendly cars are dull to drive, right? Er, wrong. Thanks to its tall gearing, the Insight isn’t quick, hitting 62mph in 12.0 seconds and topping out at 112mph, but Retro Road Test fans will know fun isn’t all about speed in cars like these.

You sit with your bum on the floor surrounded by a weird and wonderful interior. Just the two seats and a sloping roofline (helping the 0.25Cd drag coefficient) makes it feel a bit sporty – but you are very aware of how big other cars are in traffic.

The steering, while not particularly direct, provides enough feedback to give you the confidence to carry speed through corners. The suspension, meanwhile, manages to be both wallowy and firm.

The Insight’s crucial facts and figures are still impressive today. How about a combined 83.1mpg (although we’ve heard of owners comfortably exceeding this)? A 40-litre tank means it can cover 700 miles before needing a fill-up, too. It emits just 80g/km CO2 – less than the most eco-friendly Ford Fiesta on sale today. And it’s packed with technology to help improve efficiency: stop/start as standard, as well as a gearshift indicator and even low rolling-resistance tyres. Amazing in 1999. 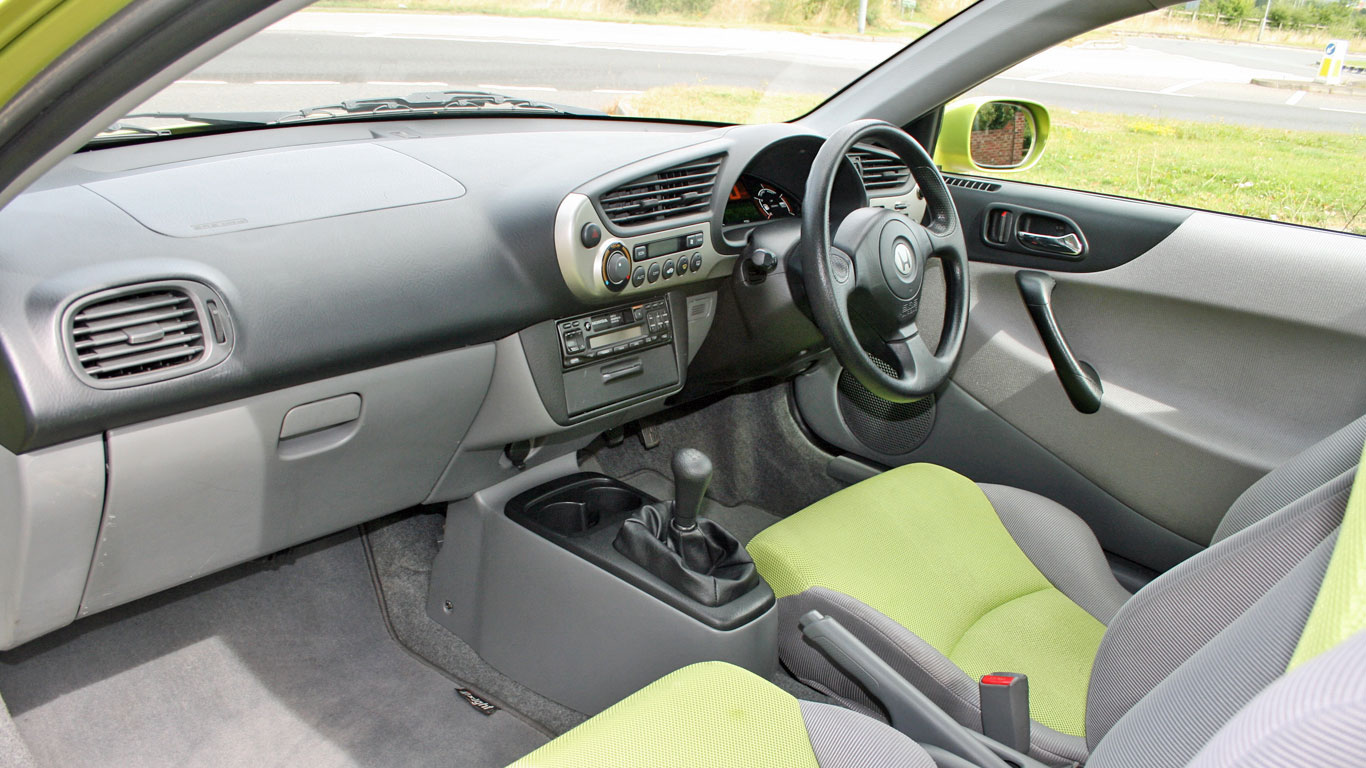 The original Honda Insight would make for a great everyday hack. It’s cheaper to run than even the most economical modern cars, and it’s unlikely to leave you stranded on the side of the road. The interior, while lacking a few mod-cons, perhaps, is perfectly comfortable – although you might feel a tad vulnerable on motorways. Oh, and if you need to carry more than one passenger it’s obviously a no-go.

There weren’t many sold in the UK, so simply finding one can be difficult – we found just three currently listed in the classifieds. Pay as much as you can afford, as buying a cheap one could be a false economy. A £3,000 budget should get you a reasonable example, but spend more if you can find a really tidy one.

It’s a Honda – so it’s fair to say it’s likely to be fairly reliable. However, the earliest models will now be 17 years old, so their batteries are likely to be a little past their best if they haven’t already been replaced. Budget around £2,000 for this.

With an aluminium body, rust shouldn’t be an issue – but look out for any minor bumps and scrapes. They might not be cheap to repair. 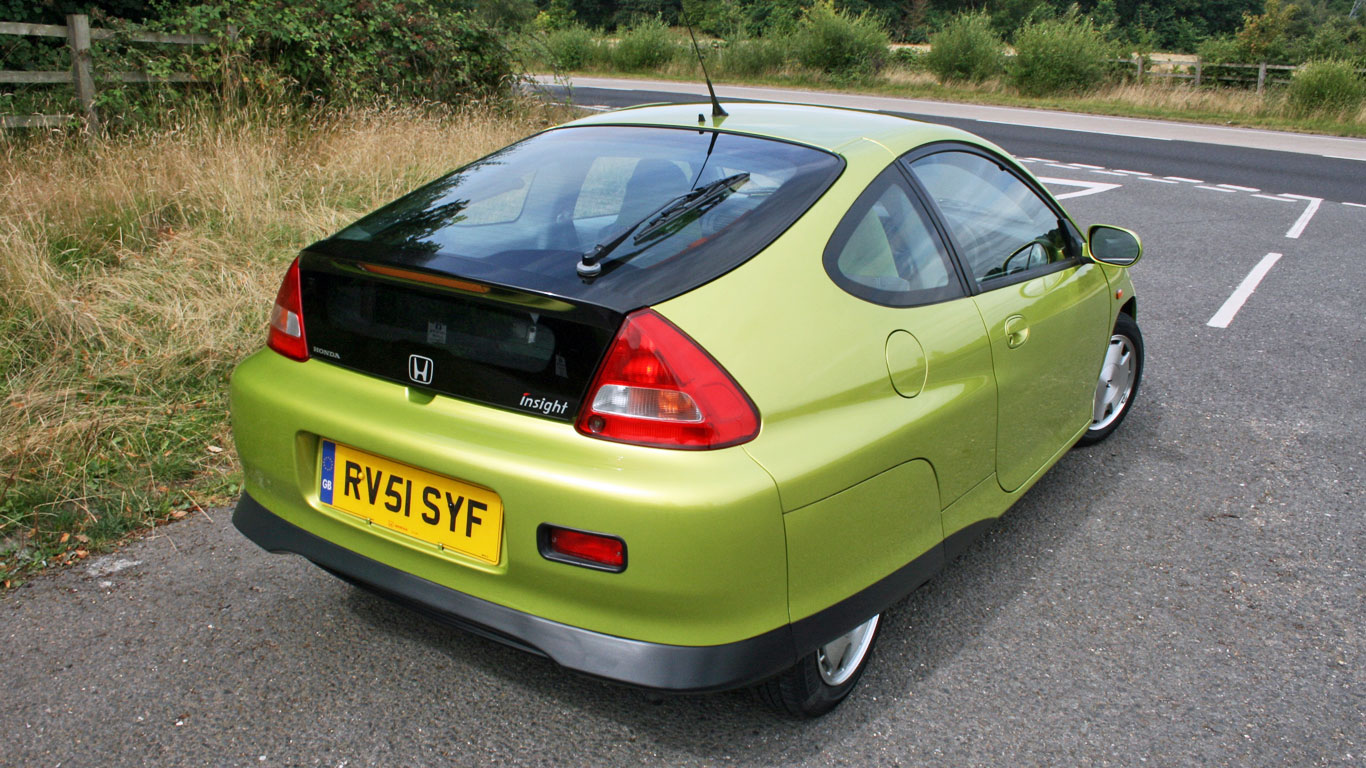 Yes, if you can find a good one. Sure, by the time you’ve factored in maintenance costs you might be better off running a diesel Golf or similar, but this is much more fun. Whether a quirky everyday runaround or a garage queen (and probably a decent investment), the original Honda Insight ticks a lot of boxes. Just as long as you don’t need to carry more than one passenger.

The legendary original Honda NSX was handcrafted at the firm’s specially-built Tochigi plant, but declining sales towards the end of its life meant the Insight and S2000 were built at the same factory. Yes, this 83.1mpg hybrid was built alongside a mid-engined, Ferrari-baiting supercar.