A date in Dagenham with a working-class hero 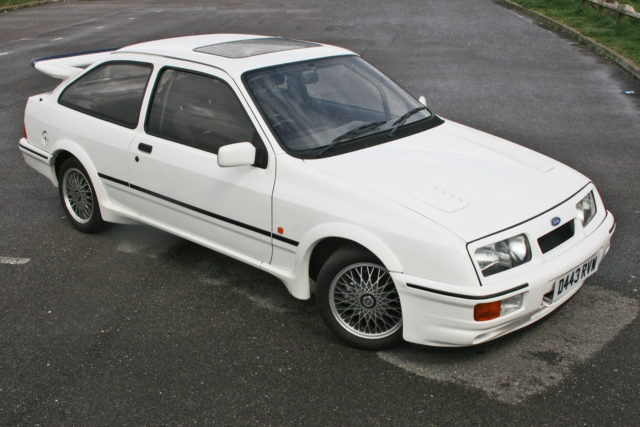 Phwoar. Thirty years after it was launched, the Sierra RS Cosworth still looks mega. A jutting front bumper peppered with air intakes, wide wheelarches and, of course, that Boeing-spec rear wing: it’s enough to make men of a certain age need a lie-down.

Ford built 5,545 examples of the original three-door Cosworth, but many were modified, stolen or crashed – possibly all three. Today, this turbocharged hot hatch is a bona fide classic car, with mint examples of the limited-edition RS500 nudging £100,000.

The Cossie won’t ever appeal to blazer-and-red-trousers set, though: this is a working-class hero. And you know what they say about meeting your heroes… 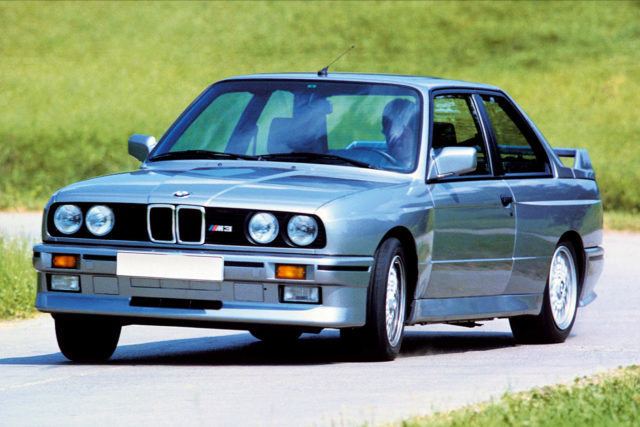 A family hatchback with near-supercar performance (in its day), the Cosworth broke new ground. This was the 1980s, remember, when the dividing line between ‘mainstream’ and ‘premium’ was less blurred than it is now.

Its closest rival was perhaps the original ‘E30’ BMW M3: another homologation special born for the racetrack then tamed for the road. However, the M3 was markedly more expensive, and a very different – if equally exciting – driving machine. Ironically, values for the two cars aren’t that different today, and both command a cult following. 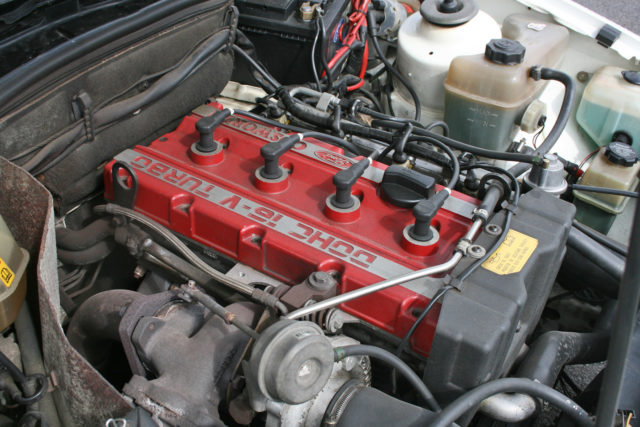 Open the Sierra’s louvred bonnet and… phwoar! Few things get us more excited than a bright red cam cover embossed with: ‘DOHC 16-V TURBO COSWORTH’. The 2.0-litre engine uses a Garrett T3 turbocharger to boost output to 204hp, or 224hp in the RS500. Racing versions boasted up to 600hp.

The standard Cosworth we’re driving is from Ford UK’s heritage fleet and was used as a development car at Dunton (hence the rollcage). Get past the inevitable turbo lag and it blasts to 60mph in 6.5 seconds. V-Max is 149mph.

Interestingly, the ‘Cossie’ was claimed to be the first road car to generate downforce at speed. That whale-tail wing isn’t just for car-park posing, you know… 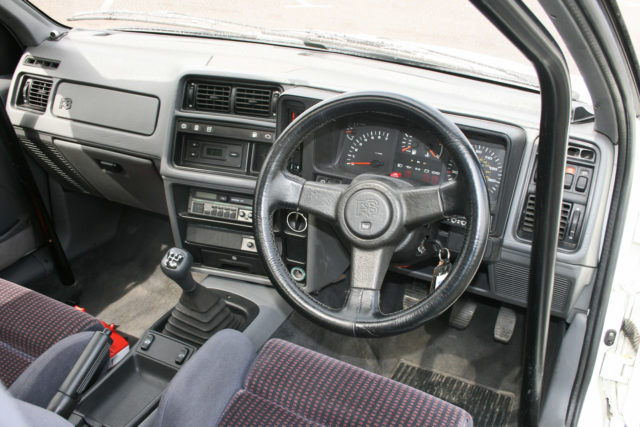 Two hundred and four horses was an enviable stable in 1986, but even a Fiesta ST200 tops that today. The Sierra’s closest descendent, the new Focus RS, has 350hp.

Even so, floor the right pedal and the winged warrior still feels quick, its raucous four-pot rasping as the rear tyres break traction on damp Dagenham roads. The gearshift is a little rubbery, the steering slightly slow-witted, but there’s no shortage of feedback.

Find a quiet B-road (or an empty McDonalds car park) and the Sierra is more than happy to go sideways. Yet it’s less intimidating than I expected, despite the total lack of electronic traction aids. Don’t expect the scalpel-sharp precision of an E30 M3, but the Cosworth isn’t the blunt instrument its Essex-boy image might suggest. 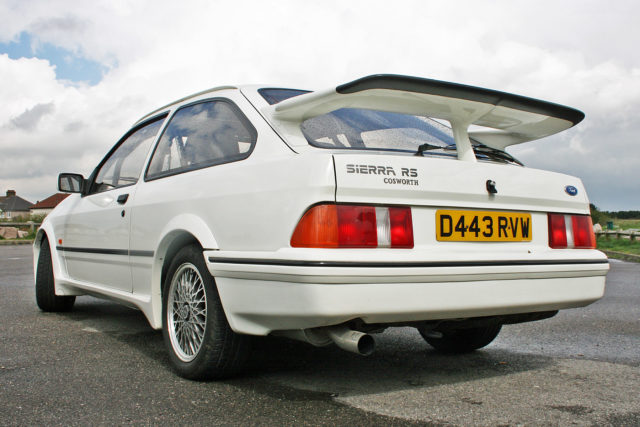 The Sierra’s ‘YB’ Cosworth engine is reliable in standard tune; problems usually arise when over-enthusiastic owners crank up the boost. It also found a home in later Sierra Sapphire and Escort Cosworths, so spare parts are easy to come by. However, cosmetic items, such as spoilers or interior trim, could be much harder to source.

With any luck, whatever money you spend on fuelling, insuring and maintaining your Cossie will be more than covered by its appreciation in value. Owning a classic Ford is better than money in the bank – and certainly more fun. 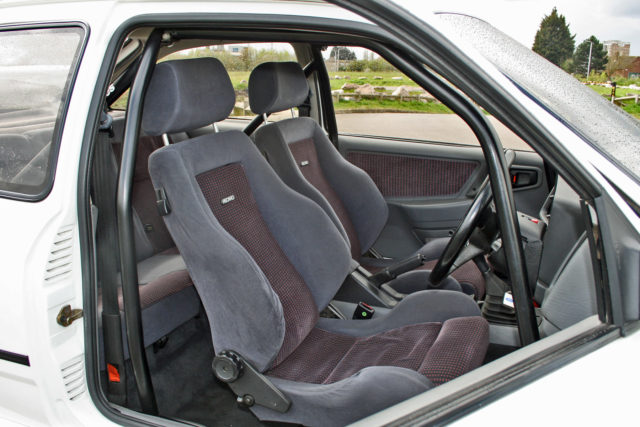 There’s a certain irony in the ‘people’s performance car’ being tucked away and saved for special occasions. But few, if any, Sierra RS Cosworths are daily-drivers today; skyrocketing values have seen to that.

Rust is the sworn enemy of most classics, so we suggest storing the car over the winter months, then enjoying it to the full come summer. A Cosworth should definitely be kept garaged all year round, though; thieves prey on fast Fords, and Cossies are notoriously nickable. 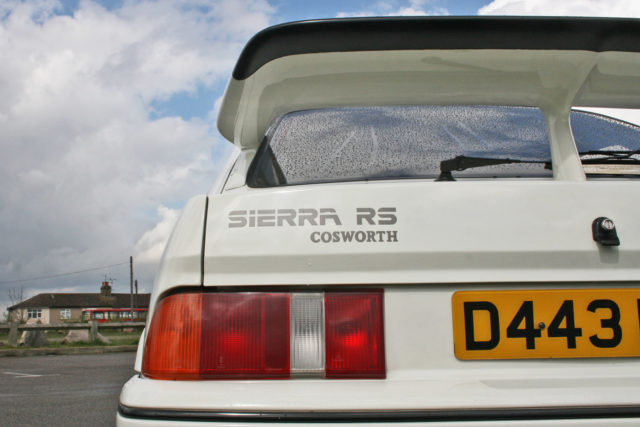 ‘A lot more than a few years ago’ is the easy answer. At the time of writing, there were just four three-door Sierra Cosworths for sale on Pistonheads, with the cheapest at £45,000. That’s nearly three times the £15,950 the car cost when new. RS500s are pricier still, despite being an inferior car to drive on the road, according to contemporary reviews.

Depressingly, the four-door Sierra Sapphire Cosworth is heading in the same direction. You’ll struggle to find a standard example for less than £20,000. 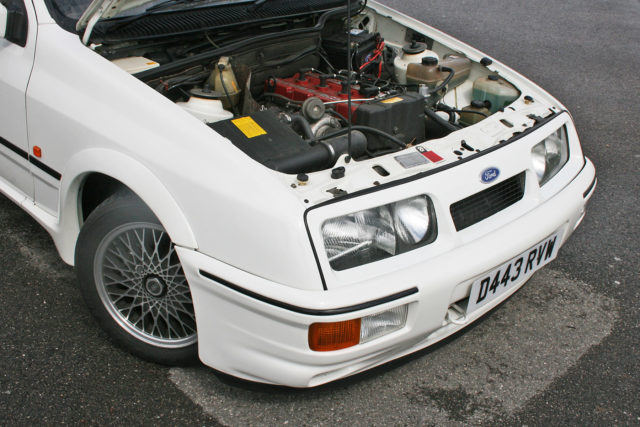 Firstly, steer well clear of any Cosworths that have been tuned. Turning up the turbo boost destroys driveability as surely as it decimates the car’s value.

Don’t buy without a comprehensive service history – there are plenty of obsessive owners out there – and check the VIN number on the chassis matches the logbook (V5C). The Sierra’s bodykit is fairly adept at hiding corrosion, too, so get your knees dirty and poke around underneath the wheelarches and rear suspension.

If you’re considering an RS500, check with Ford that the car is genuine: fakes aren’t unheard of. Above all, we’d advise getting a professional inspection from a specialist before you buy. On an investment-grade car like the Cosworth, it’s money well-spent. 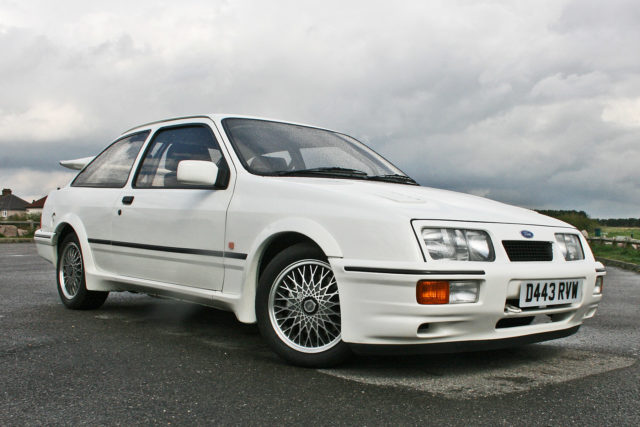 Like shoulder pads and Shakin’ Stevens, the Sierra Cosworth is a product of its time. Drive one today and it’s fun, but ever-so-slightly underwhelming: a little bit baggy and not outrageously fast.

Does that matter? Probably not. The Cossie remains one of the coolest cars ever made. If, like us, you grew up reading Max Power and lusting after hot hatchbacks, it’s still the daddy.

If you’re looking for an investment, a three-door Cosworth is up there with the best fast Fords. But do us a favour and take it for a blast occasionally. Wherever you go, you’re likely to receive a hero’s welcome. 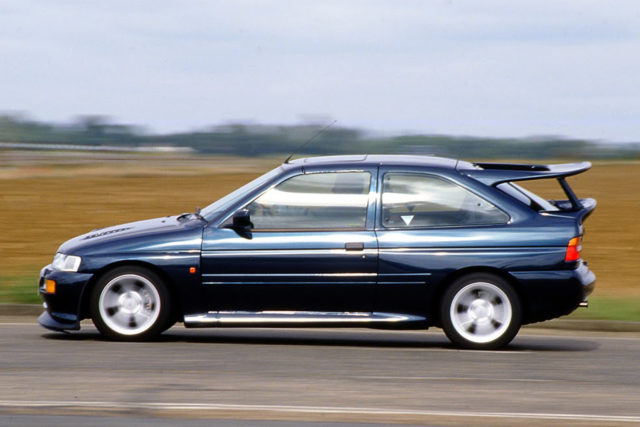 The Escort Cosworth replaced the Sierra in 1992, and was actually based on the Sierra Sapphire Cosworth 4×4 chassis – rather than the Mk5 Escort it resembled. Power from the YB engine was increased to 220hp and the whale-tail made a comeback – albeit as an option.

Jeremy Clarkson famously bought a Escort Cosworth in the 1990s. He said: “Late at night, when all I wanted to do was to get home, it would be sitting there, angry and spoiling for a fight.”

The DB Mk3, DB5 and Vantage all had starring roles in James Bond films – but these Aston Martins are only part of Dylan Miles' enviable collection of classic cars
Read more

How Dacia Bi-Fuel LPG cars will save you money

Inspired by the Bentley EXP 100 GT, we go in search of some of the world’s biggest grilles, including the BMW 7 Series and Lexus RX
Read more

After more than two decades of being left to rot outside, fully restored Marcos is now back up for auction on Bring a Trailer
Read more