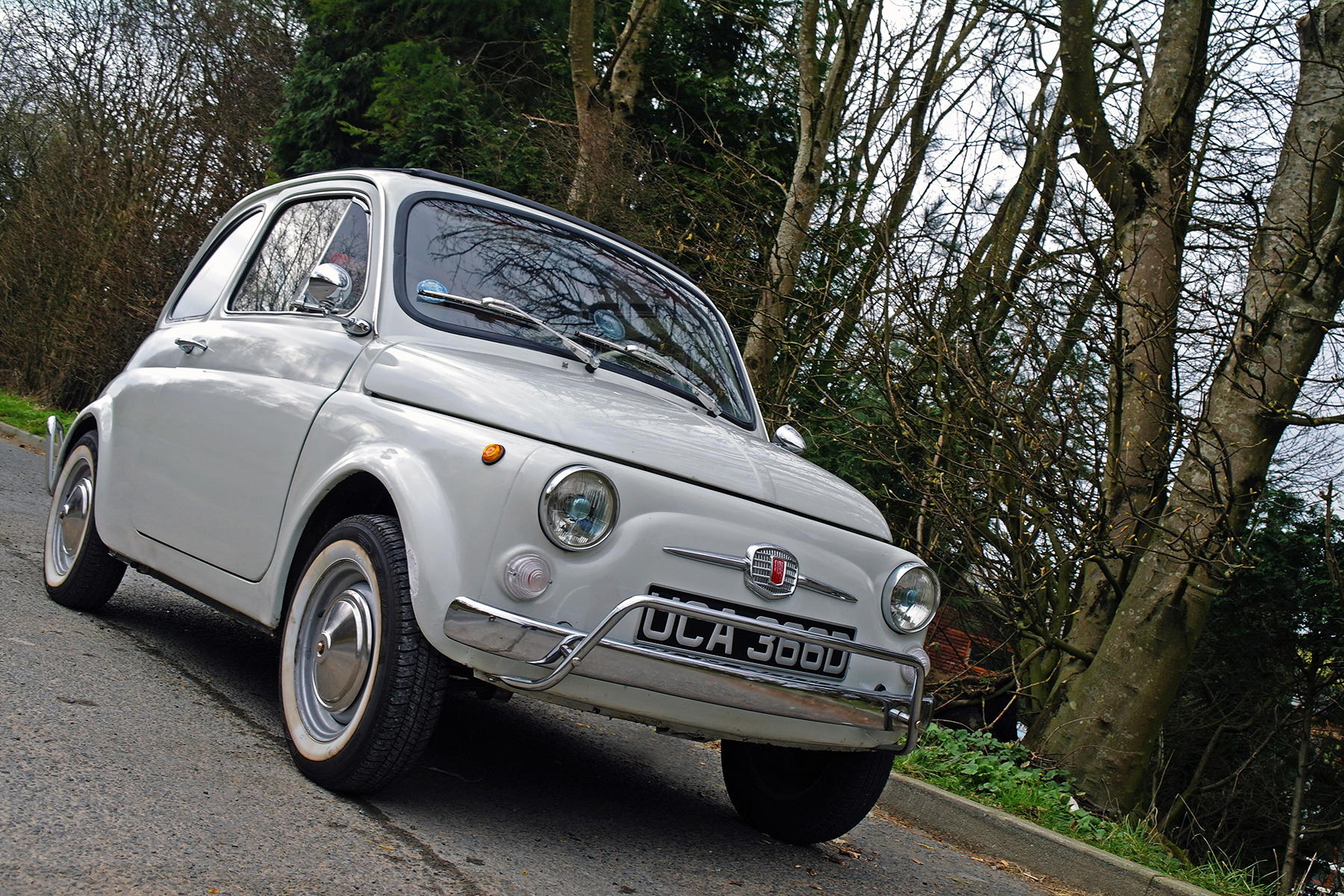 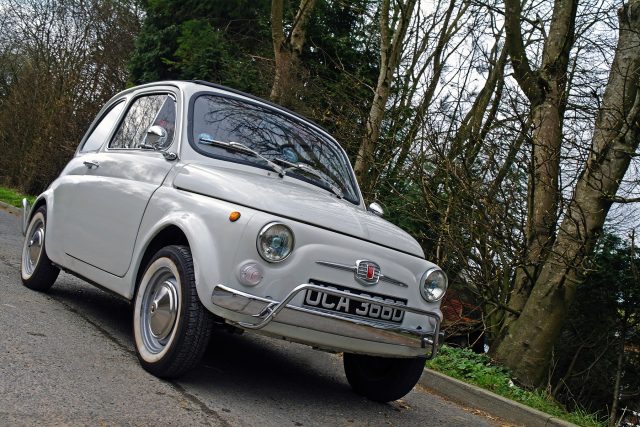 The current Fiat 500 has been the darling of the city car market and beloved of young and trendy urbanites since it was launched in 2007. But there is another way to go if stylish retro motoring tickles your fancy. The current 500’s predecessor – the Nuova 500 – first won over city drivers in 1957. Designed in part to get a country on wheels, its diminutive dimensions, simple two-cylinder engine and cute-as-a-button looks immediately earned it many fans. And, of course, it proved so popular, it unashamedly provided inspiration for its newer (and much larger) ancestor.

Replacing the front-engined 1936 Fiat 500 ‘Topolino’ (or ‘little mouse’), the Nuova (‘new’) 500 made use of the popular rear-engined template of the time. It followed in the tyre tracks of its larger 600 predecessor, and was part of the ‘economic miracle’ that was post-war Italy’s decade-and-a-half of sustained economic growth. Like the contemporary Volkswagen Beetle and Citroën 2CV, it can be considered one of the earliest mass-market ‘people’s cars’. It enjoyed an 18-year production run from 1957-1975.

Replaced by the angular, but similar-in-concept Fiat 126, the Nuova 500 is now a popular classic car. With a simple outlook and endearing character, it’s easy to see why over four million Nuova 500s were produced. Our test car is a 1966 500 ‘F’ with a 499cc 18bhp engine, which is owned by Great Escape Cars. Available to drive on the company’s road trip or corporate event packages, the car has also been used on the Antiques Road Trip TV programme. It was imported from Milan in January 2015. 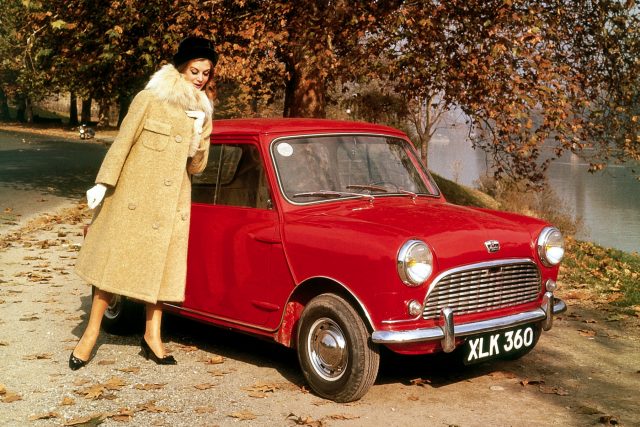 As its production run encapsulated almost two decades, the Nuova 500’s rivals are varied. Perhaps the most obvious is the ground-breaking Morris Mini Minor/Austin Seven/Mini of 1959, which brought front-engined, front-wheel-drive technology to the mass market. Similar in size to the 2,970mm Nuova 500, the 3,054mm Mini was more powerful: its 848cc four-cylinder developed 33hp – almost twice as much as the little Fiat’s unit. The Fiat weighed less, though; the tiny Italian car tipped the scales at 470kg, against the Mini’s 617kg.

As the Nuova 500 entered the 1960s, more rivals appeared in the shape of the similarly-powered two-cylinder 1961 NSU Prinz 4, as well as the four-cylinder Hillman Imp of 1963. Both newcomers shared a rear-engined layout with the Nuova 500, but had larger dimensions than both the Italian car and its British Mini rival. Coincidentally, there was another NSU link: the pretty Neckar Weinsberg 500 Limousette and Coupé were based on the Nuova 500 and produced by NSU/FIAT Weinsberg Karosseriewerke in Heilbronn, Germany. 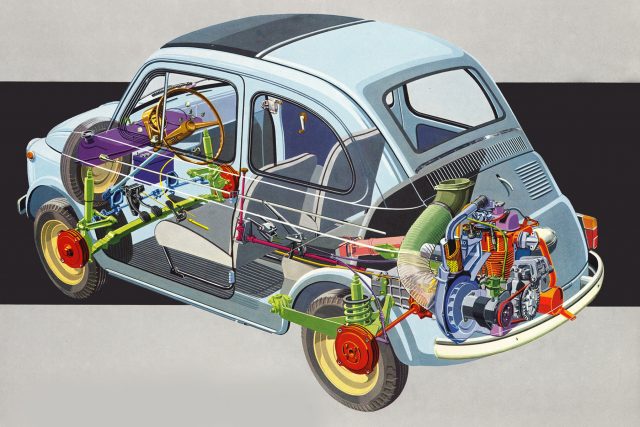 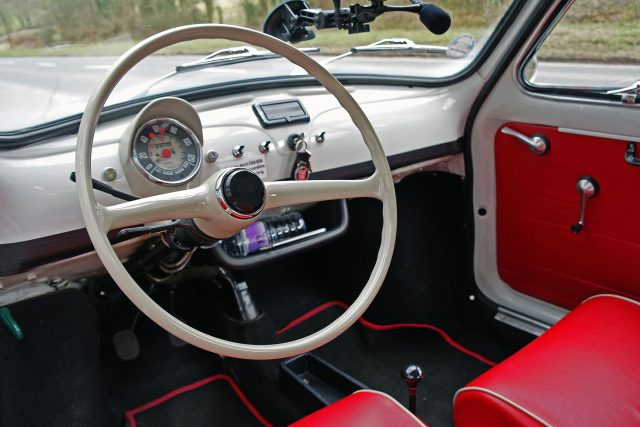 The first thing that strikes you when you first get into a 500 is the amount of space inside. Despite its bijou size, it uses what interior space it does have to much better effect than the newer model that shares its name. Thanks to its rear-engine, rear-drive layout, there’s no bulky transmission tunnel to get in the way (unlike the current car), and its large and upright glasshouse makes it feel spacious and easy to place on the road.

On the move, the engine really has to be revved to get any decent performance, and although our mildly hilly, open-road test route wasn’t best suited to the little Fiat, it coped well. Once the engine is on song, it does assault the ears somewhat, but don’t worry – it might sound like you’re doing it some damage, but that’s just the way it is. Quiet it’s not, but then that’s one part of the original 500’s multi-faceted character. Top speed is just 59mph, so motorway cruising is something denied to Nuova 500 drivers.

The hardest thing to master if you’ve not driven one before, is the non-synchromesh ‘crash’ gearbox. You need to double de-clutch every time you change gear – you’ll do it very often – and it can be a tricky thing to get the hang of. The steering can feel vague out on the open road, too, but the 500 feels quite nimble and light on its tyres. The brakes work well enough, and you’ll be glad when you have stopped, just to give your ears a rest if nothing else. For a small car, the little Italian can feel quite demanding and tiring to drive for long periods. But isn’t that just part of the fun? 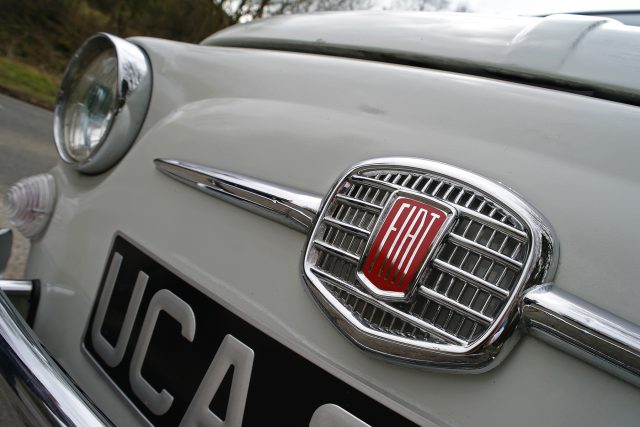 Although the downsized two-cylinder engine was a departure for Fiat, it has a reputation for being a tough little unit. The car’s non-synchromesh gearbox was used throughout its life, but thankfully is also famed for being strong. If it does need repair, though, it’s not a simple task.

The 500’s dinky dimensions mean parts prices aren’t too prohibitive: a front panel can cost from as little as £72 from an independent specialist, while bonnets start at around £95. Door hinge kits are as little as £6, while doors themselves range from £288 to almost double that.

With not much power – and therefore not a huge amount of speed – the 500 has an advantage when it comes to economy, with 53mpg commonly reported. Most now fall under the VED historic vehicle exemption rule for cars registered before 1 January 1976, too, meaning they cost nothing to tax. To further keep costs to a minimum, a classic car insurance policy would be a wise investment. 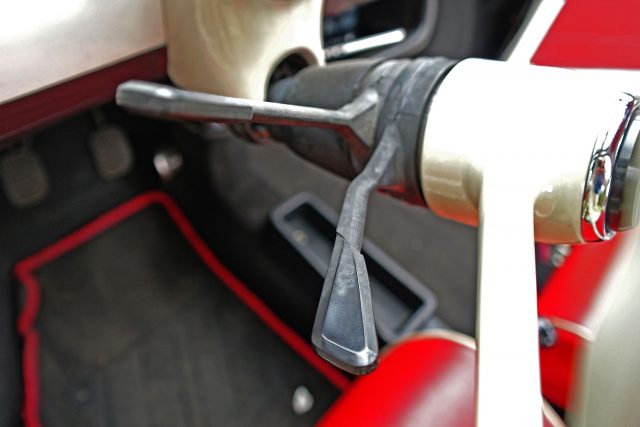 For today’s congested streets, the Nuova 500’s pint-sized footprint is perfect. A modern Smart Fortwo may still be shorter – so 90-degree parking facing the kerb may be off the cards – but the 500 can nip through narrow streets that would be out of bounds to bigger cars, its later relative included.

If you want more practicality, the equally cute ‘Giardiniera’ estate version of the Nuova 500 was made from 1960 to 1977 and enjoyed a larger carrying capacity, thanks to the engine being turned on its side and mounted under the boot floor.  Don’t forget the sunroof on the standard car, though – fold it back to carry long loads and you’ll possess the coolest load-lugger in town.

While longer journeys out of town may prove more of a challenge due to that small engine, our 1966 test car provided modest fun out on the roads surrounding the Welsh borders. However, you do have to rev the little unit to its absolute limit, so it’s best to keep to the urban landscape. 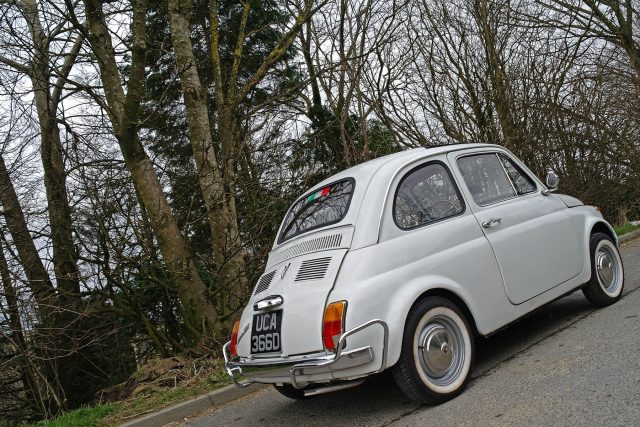 Cars that need importing may be cheaper still – mid-1960s cars can be around £3,500, but don’t forget you will need import duty and VAT adding to the total bill. It goes without saying that cars that have been better cared for fetch higher prices – we’ve seen one 1971 500 F that has been resprayed, serviced and kept in a garage for £12,500. Later 500 Rs see peaks in demand as they offer a combination of the later running gear with the early, retro-style ‘round speedo’ dashboard, rather than the plastic padded one of the 500 L. 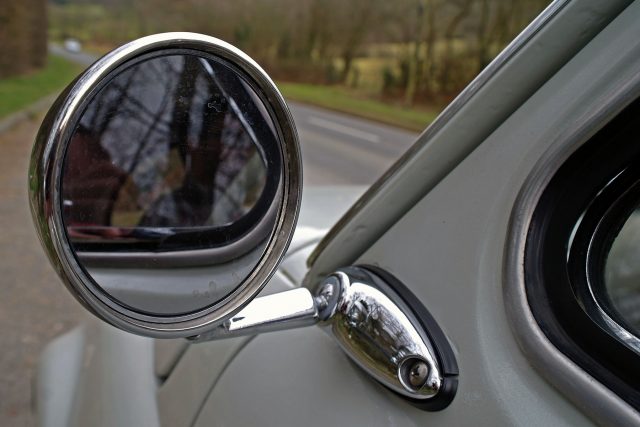 As with almost all classic cars, rust is one of the biggest enemies of the 500. Examine the front panel behind the headlamps closely, along with the areas around the front and rear windows, as well as the engine cover. Don’t forget the usual spots, too, such as the bottoms of the doors, sills, wheel arches, and wings. Open the front ‘bonnet’ and check there, too, paying particular attention to the battery tray and spare wheel well. The floor can need attention on cars that haven’t been looked after, too. Rot is usually caused by leaks from that same large sunroof that gives the car a certain amount of its character.

Oil leaks from the engine are common, but a lot of smoke from the exhaust suggests the little two-cylinder will need a rebuild. The dinky unit also relies on its cooling flaps working correctly – if they don’t, it can overheat and substantial engine damage can result. Also look for worn carburettors, timing chains and clean, regularly-changed spark plugs. A check of the suspension morning points is also worth doing, too. Look at both the rear semi-trailing arms and the transverse front leaf spring for corrosion. Every 1,000-1,500 miles the front kingpins need greasing, too.

With so many leaving Fiat’s Lingotto factory in Turin, a great number of Nuova 500s will be left-hand-drive like our test car. If it’s known that a particular car has been subject to a steering wheel swap to right-hand drive, an independent specialist can check if the conversion has been carried out properly. As befits its car-for-the-masses roots, the 500’s interior is refreshingly simple. Wear and tear will be noticeable, but parts (as well as exterior panels) on early cars can be difficult to find. 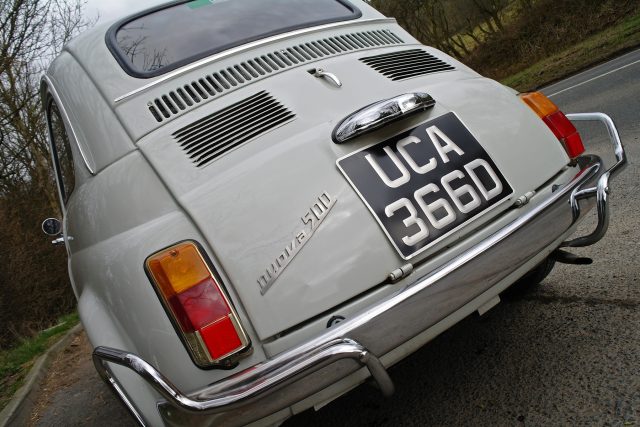 As with almost all classic cars, there’s characterful appeal to the 500 that rubs off on you as you drive it. A happy little car with plenty of personality, for retro-chic appeal, a Nuova 500 beats the current Fiat 500 hands down. Healthy production figures mean there are still plenty around, and the tiny silhouette is one of the most well-known and endearing on the classic car scene. We’d buy one and keep it for high days and holidays, unless its condition and patina dictates everyday use.

Later 500 F and L cars from the mid-1960s onwards will probably be the most reliable, for those considering a longer-term proposition. As well as the engine, last-of-the-line R cars shared some of the chassis with their 126 successor and so will be more robust still. But, even the final examples will now be more than 40 years old. However, even though it’s so instantly recognisable, we’d probably have a Nouva 500 over a similar vintage Mini, purely for the added style and Italian character it offers. With a starring role as Luigi in the first Cars movie, your kids will thank you, too. 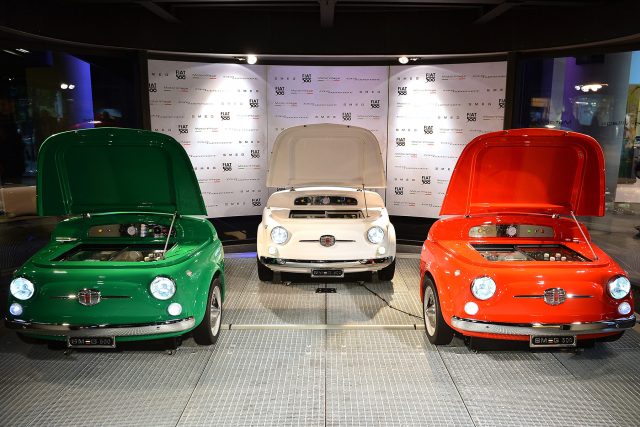 For the first eight years of its life, the Nuova 500 had reverse-hinged suicide doors, but they were phased out in 1965 due to safety concerns. However, the Giardiniera stuck with the rear-opening doors for all of its production run. The estate version of the 500 also had its wheelbase extended by four inches. The original 500 was also the first car to be offered with a flexible finance package, set to appeal to the bank of mum and dad.

If you love your 500 that much and want to park it indoors rather than in a garage, you can also buy a Smeg fridge that immortalises the little Italian. ‘Because a refrigerator is not just a domestic appliance and a bonnet is not just a car’, the SMEG 500 has been available since 2013, and is based on the front of a Nuova 500. It has a 100-litre capacity under its ‘bonnet’, and is available in traditional Italian red, green or white.