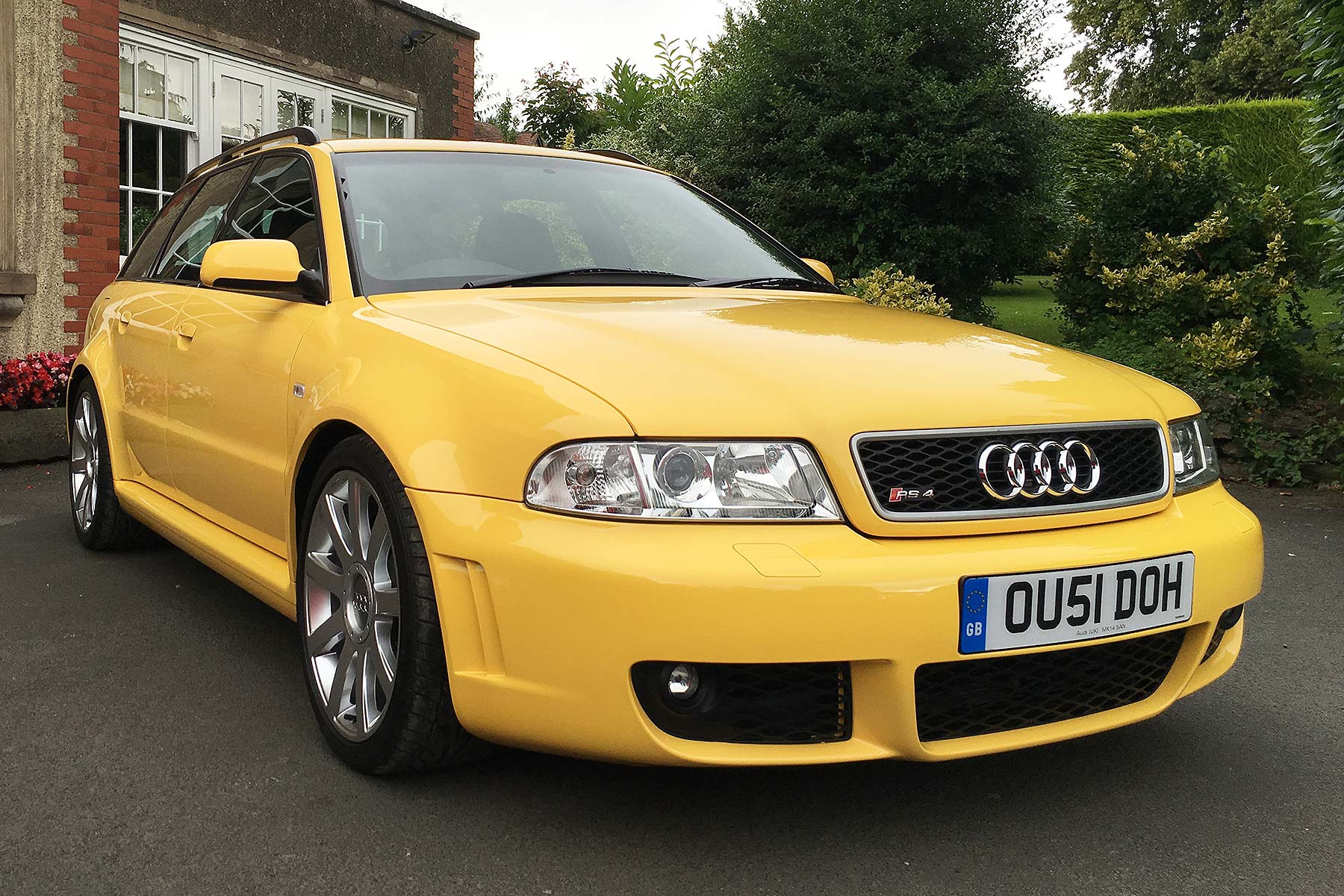 How do you follow up a cult car like the Audi RS2, that mid-90s icon built by Porsche that created an estate car that ate TVRs for breakfast? By doing the same again. Only this time, with even more.

Cue the 1999 Audi RS4, the Avant wagon that boasted a power output which, even today, seems ridiculous: 381hp from a Cosworth-developed 2.7-litre biturbo V6. Monster tyres were needed to deploy it, which needed monster wheelarches to house them. Chuck in grilles and gills aplenty, a stonking set of 18-inch alloys and one of the first deployments of dazzling-bright xenon headlights, and you may just have yourself a new cult monster. A decade and a half later, we find out if it should now seek sanctuary. 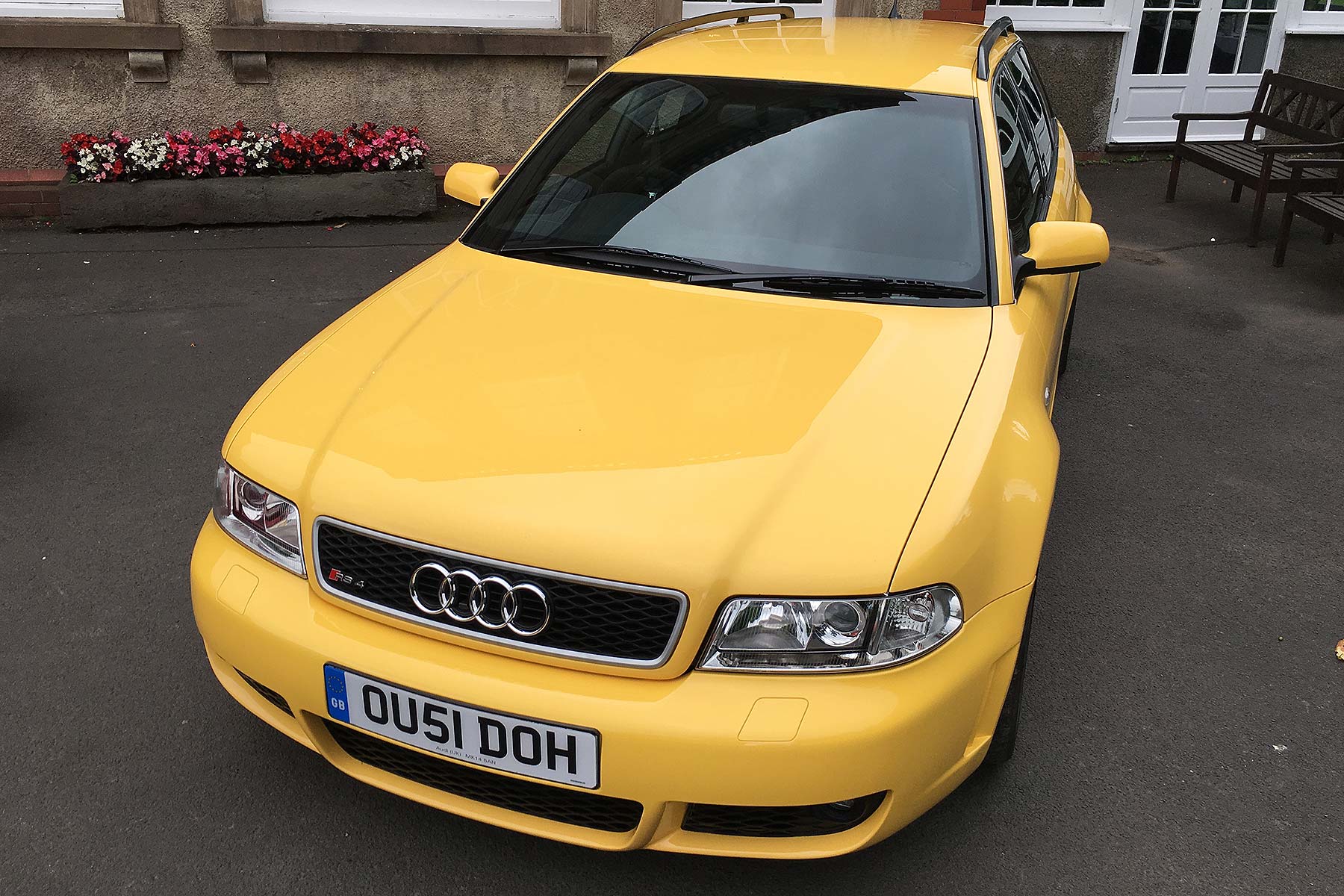 The Audi RS4 Avant was without rival. That was the whole point. “Make an ultra-fast estate?” snorted BMW and Mercedes-Benz. The very thought!

Probably the closest rivals, then, were the Mercedes-Benz ML 55 AMG and BMW x5 4.8iS, two V8 SUV heavyweights that, like the Audi, blended practicality with performance stupidity. Although if the RS4 was an indy king, they were like your overweight dad getting his jig on in comparison. 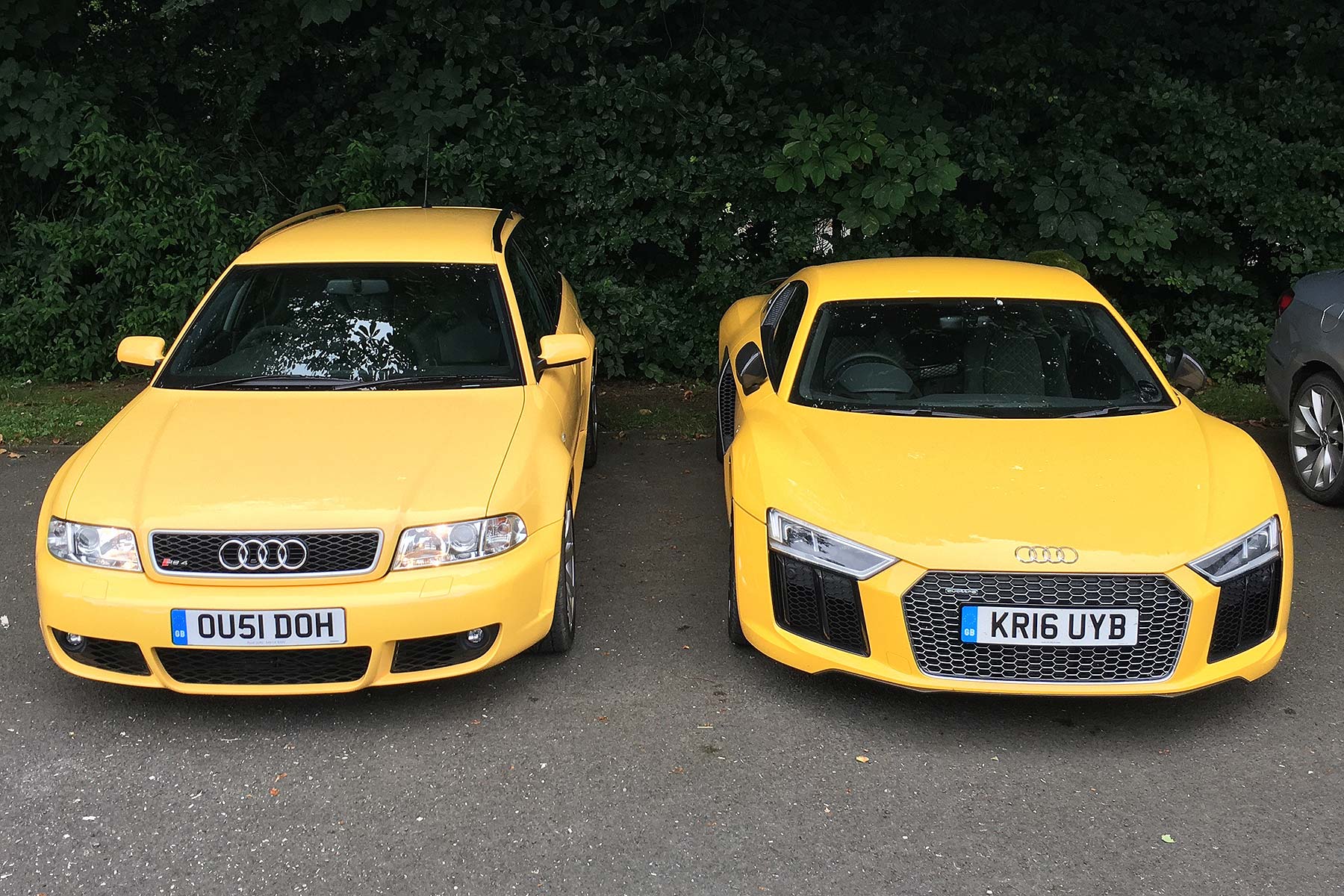 Audi handed over the 2.7-litre V6 to Cosworth Technology to thoroughly overhaul: an easy decision, given how it at the time owned Cosworth. Cue a thorough makeover that packed in a ludicrous amount of exotica for the time: proof of just how jewel-like is the fact it boasts a ridiculous 116hp more than the Audi S4 motor it’s derived from.

No flappy paddle DSG gearboxes in those days: instead, Audi beefed up its six-speed manual and quattro drivetrain, which boasted a fairly rudimentary 50:50 torque split. 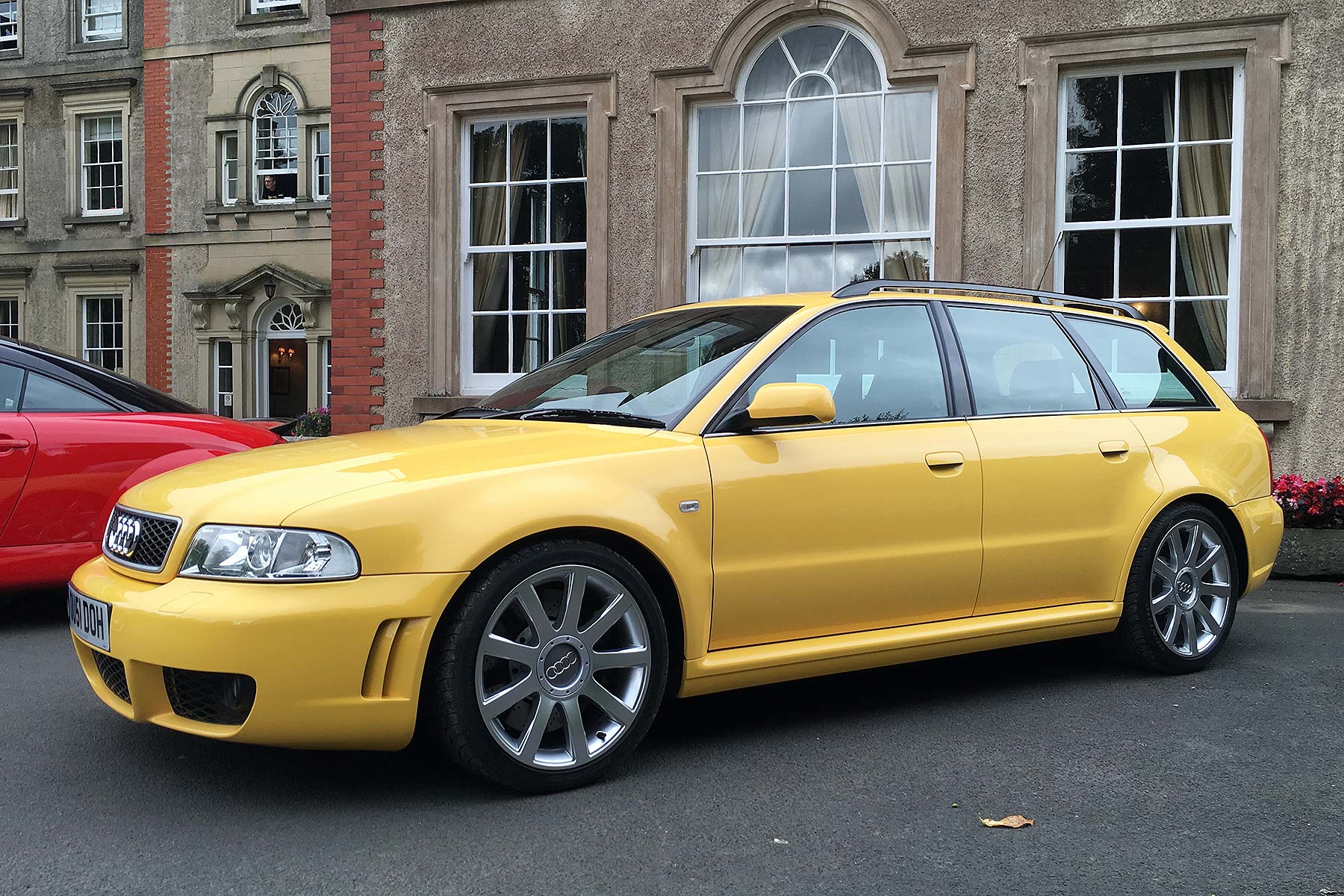 Breathe easy: it’s still addictive. Still fast. Still an event. So much power back in the late 90s was mind-warping. The power race means it’s less so today – but the drama this heavily-boosted engine serves up means it’s still exciting. Smooth, rorty and pure, it’s a motor that feels just like it is: a regular V6 with two stonking great turbos bolted on. The disconnected, sensationless surge of modern motors? This is the antithesis.

Soft-by-modern-standards suspension adds to the drama, because it rolls a bit in corners, sits down at the rear under power. Exit a roundabout, set it up to reach peak boost as you hit the exit, and the feeling is comparable to taking off in a fast jet. It’s hugely thrilling and special, so much so it’s easy to forgive the slow, old-fashioned arm-twirling steering and concrete-damper ride that until recently was an Audi speciality. 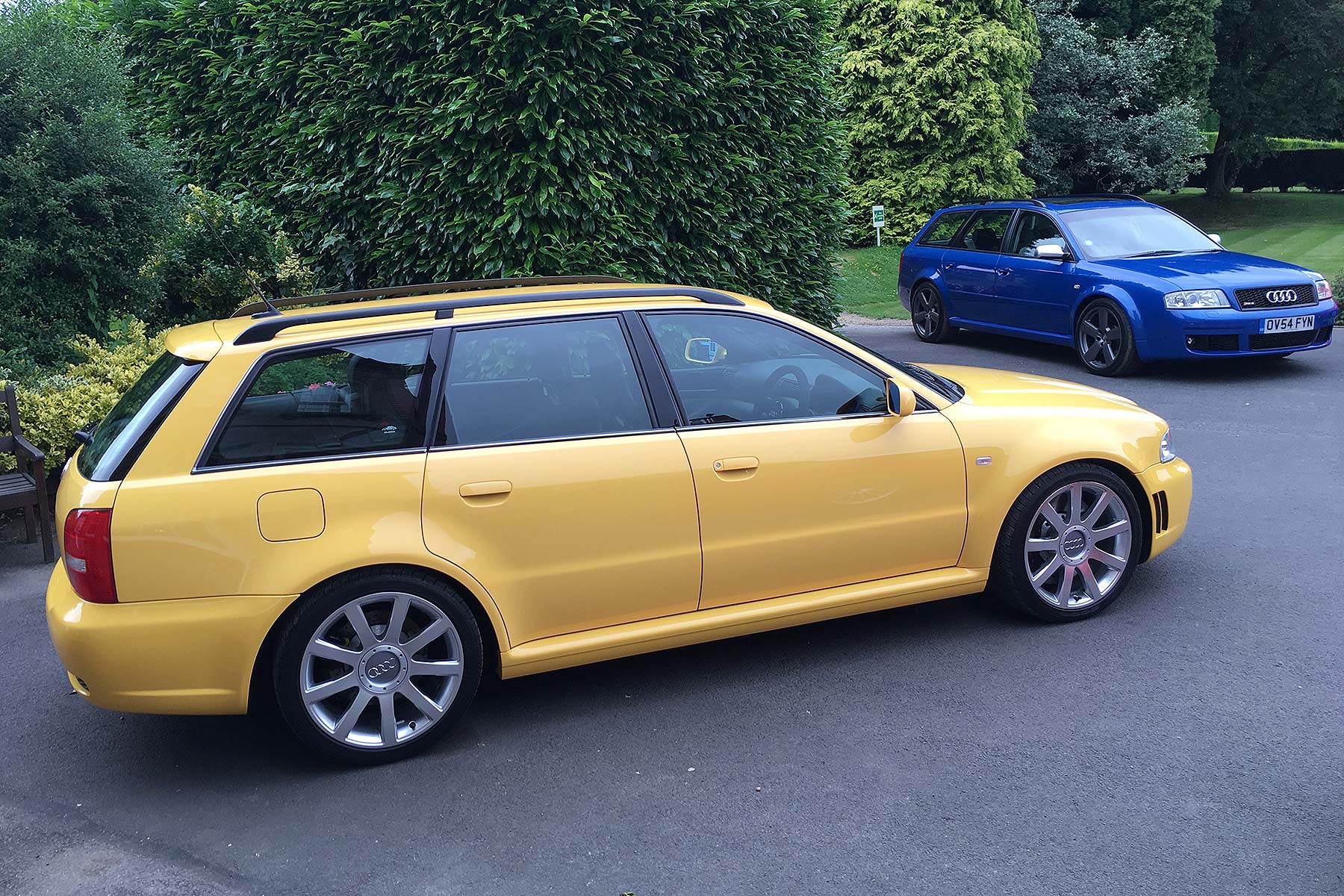 Drive it like this and it drinks fuel like a race car. I did an MPG Marathon in one back in the day: after two days of bumbling, I got 27mpg. Reunited with it today, I got half that.

The RS4 also suffered the unusual issue of bent wheels when new – seems the alloy wasn’t stiff enough to shake off the immense forces its powertrain could generate. Shouldn’t be an issue now, but worth a check, as is evidence of a full history. This is basically a motorsport engine and reliability will go out the window, as will all your money, if maintenance has been skimped. 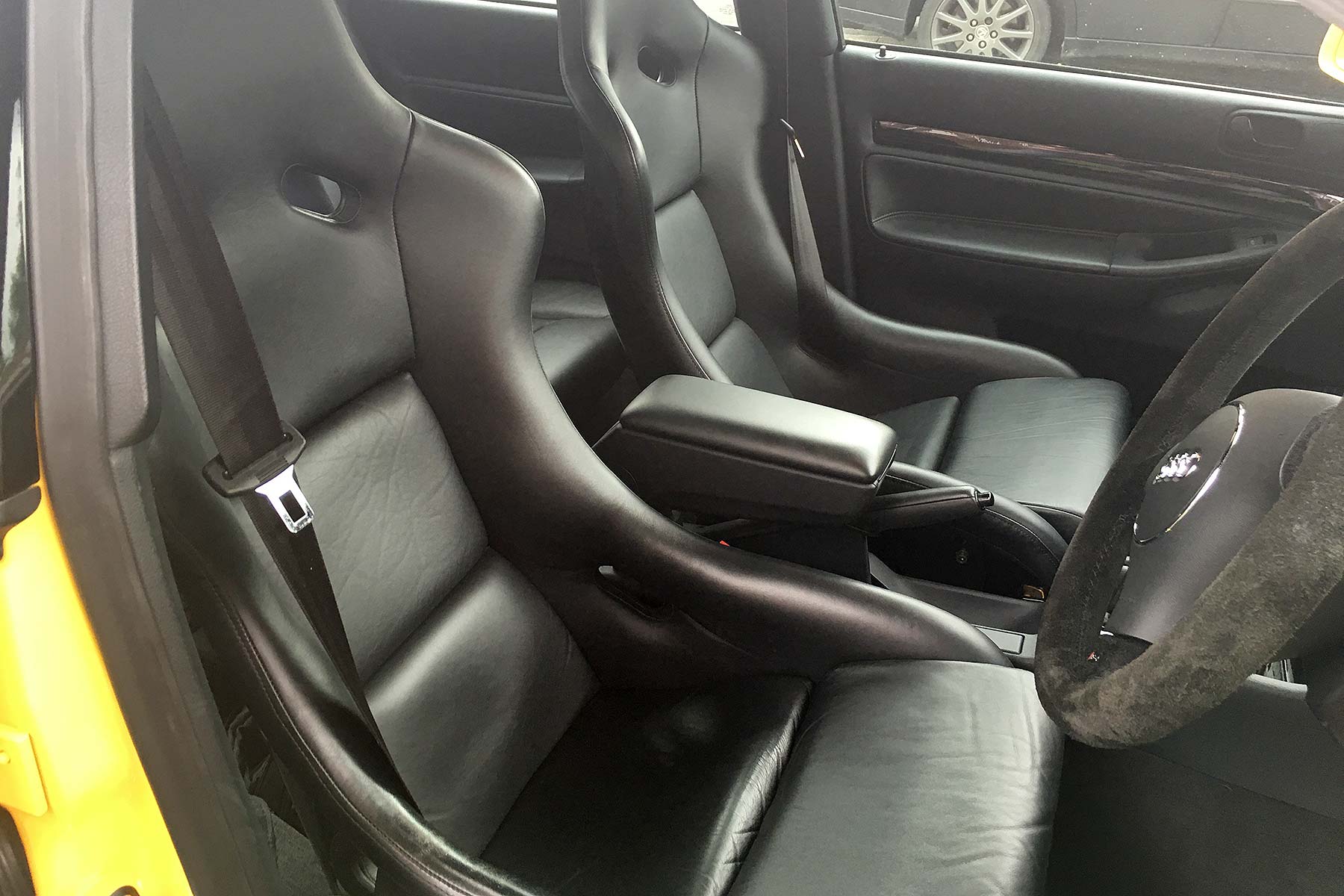 The ride will, at first, frighten you but, with miles, you learn to drive around the worst bumps and enjoy the trace of suppleness in the suspension itself to help make things not too pummelling. Stirring the snickety gearlever keeps the engine on boil and you’ve also got that old school but granite-solid Audi interior to enjoy.

The deeply bucketed seats are painful to get in and out but hug you warmly once you’re in (and give you a towering driving position, so high are they set). But it’s the stuff that made the RS4 so cool when new that mean you really can drive it everyday: five seats, practical boot, all the Audi integrity that made the first A4 such a worry to the BMW 3 Series engineers. 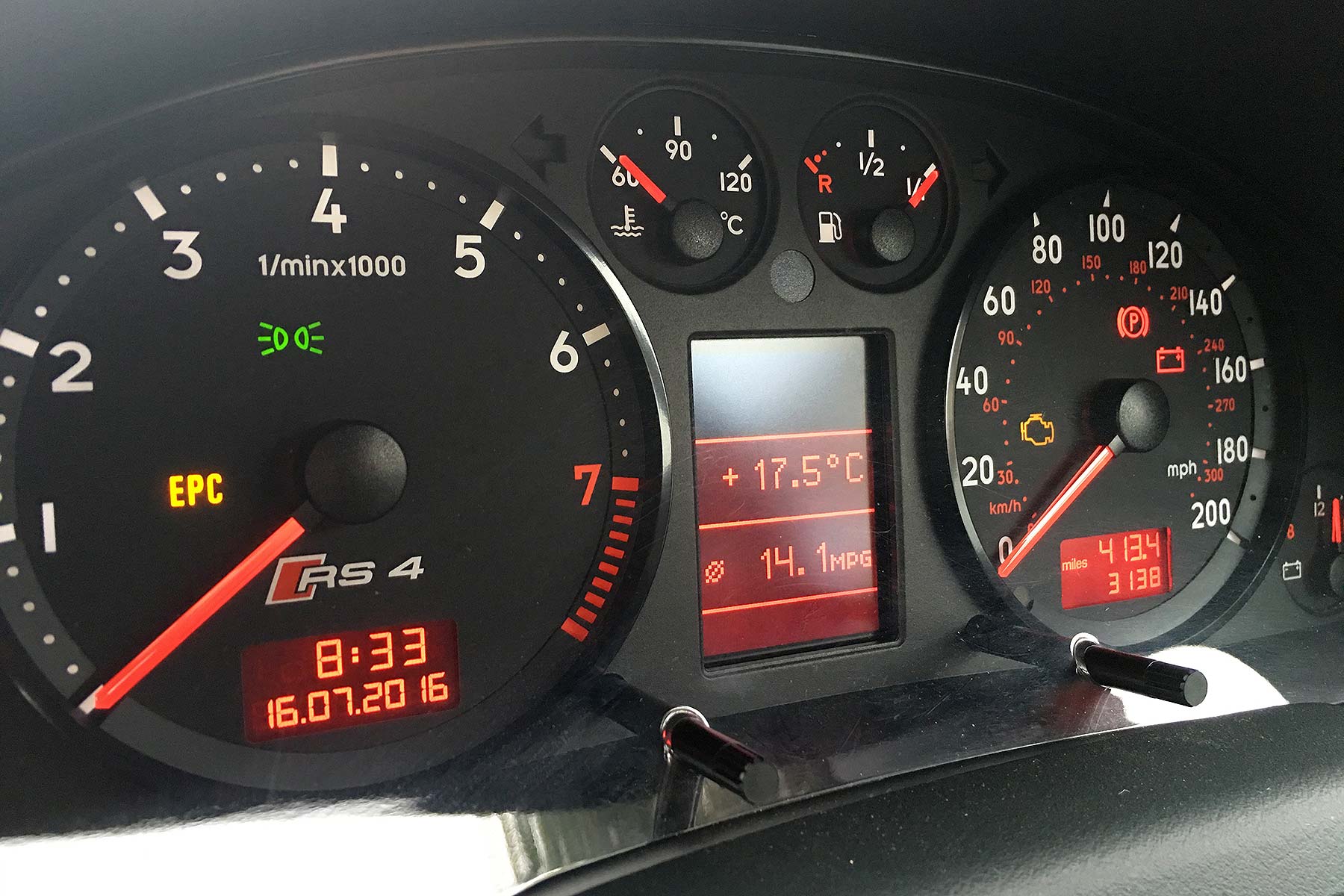 You can pay as little as £13,000 for an Audi RS4, or as much as £30,000. The most expensive ones are truly immaculate, the cheapest ones are high mileage but hopefully honest. Personally, we’d go for sub-£20k one, as they’ll be in strong condition but not so perfect and low mileage that you’ll be terrified to drive them. 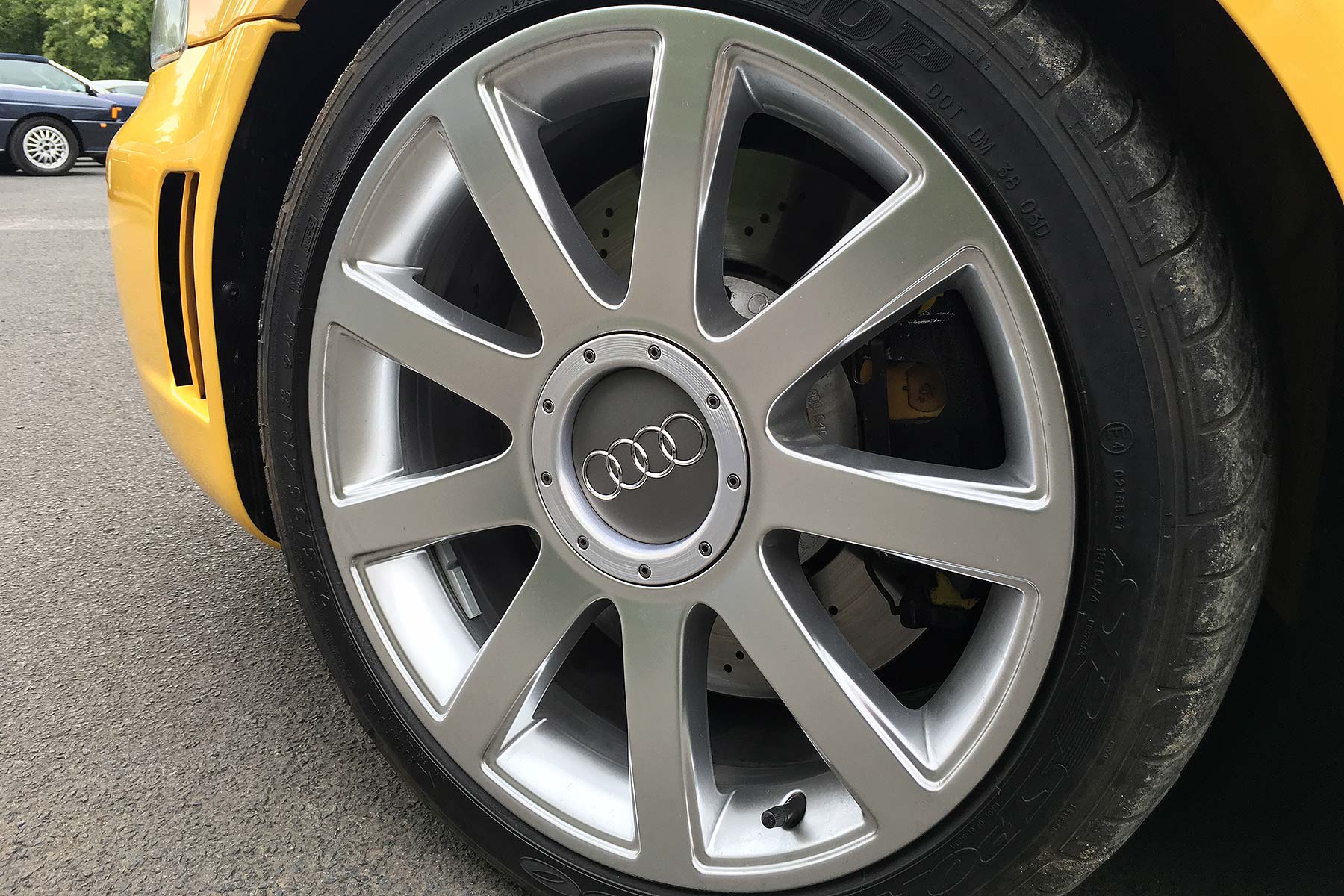 Bent wheels, full service history, crash damage, dented panels, torn seats and signs that it has been nicked. All the usual things, but with an added degree of care: Audi only made around 6,000 original RS4 and, while enthusiasts bought most of them, some were also purchased by people who should really have been in a TDI.

Frankly, we’d only buy from either a specialist or a committed enthusiast. The mere mention of Cosworth engines and ludicrous power from 2.7 litres means we’d be uneasy with going for a cheap one – and we’d not likely enjoy the best of what the RS4 has to offer either. 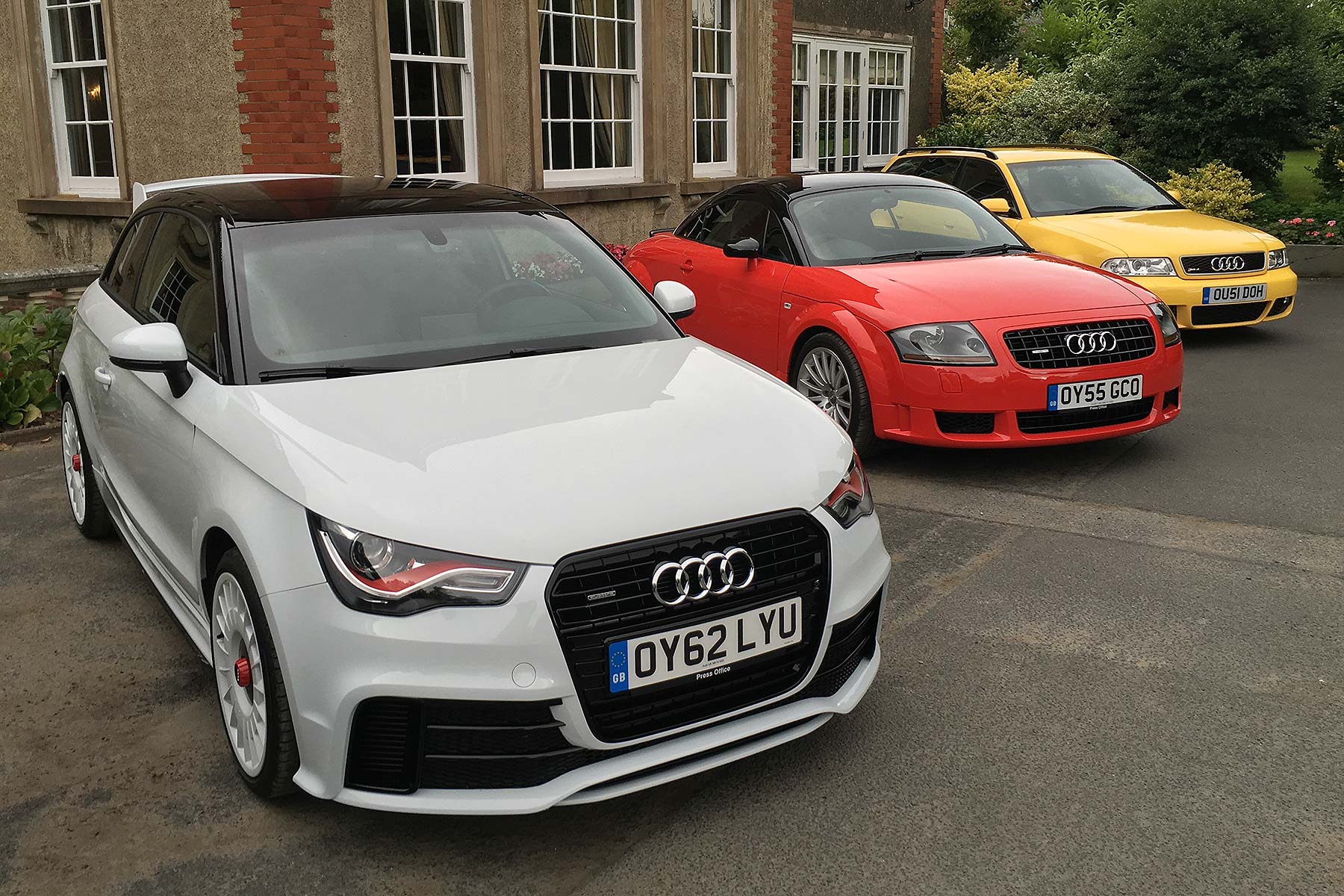 For an old-school twist on modern daftly-fast family cars, you should certainly give it a go. But really, this is a car that should be reserved for enthusiasts, those willing to treat it carefully and maintain it religiously. It’s crazy-fast but it somehow feels wrong to wring its neck and use it as you imagine Audi intended: if anything, it’s a little too specialist for that.

But if you want a really fast example of a car that shows what Audi could do just before it discovered today’s ultra-sophistication and perfection, snap one up before someone else spoils it. It’ll be a lovely possession to treasure. 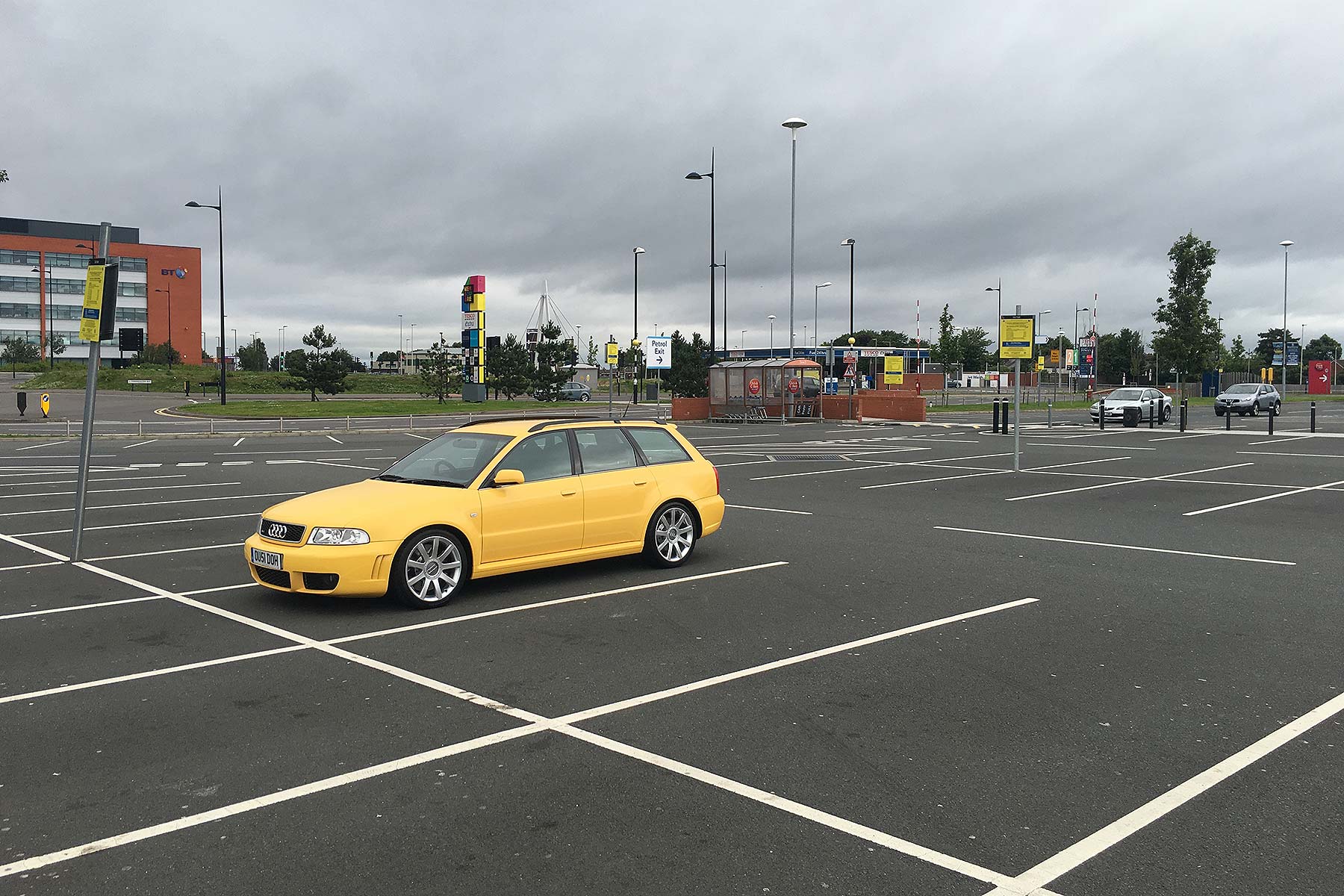 At 390 litres with the seats up, the RS4 Avant’s boot is 90 litres smaller than today’s Audi A4 saloon.