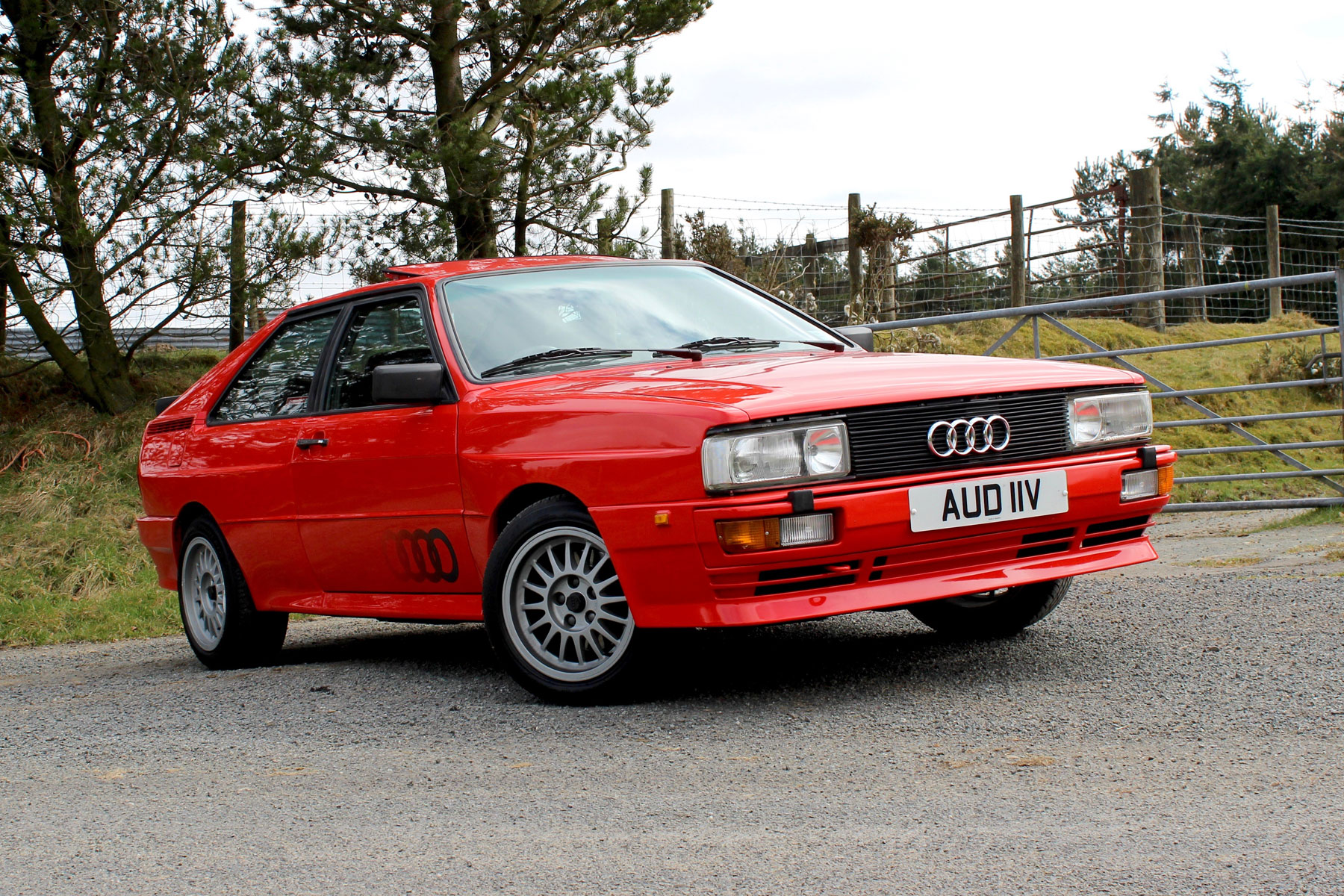 I was just eight years old when this Audi ur-Quattro first rolled out of the showroom – a mere slip of a lad, gazing at the world from the back of my father’s 1975 Citroen GS. To me, the Audi Quattro was otherworldly, a vision of the future that somehow sat far and above the rest of the Audi range.

This four-wheel-drive glimpse into the future didn’t come cheap. In 1983, Wannabe Walter Röhrls and Hannu Mikkolas were asked to part with more than £17,000 for the privilege of driving Audi’s rally car for the road – more than double the price of the less well-endowed Coupe GT. Putting that price into context, that’s about £7,000 more than a Saab 99 Turbo and £3,000 more than a Porsche 944 Lux.

But this trailblazer had it all: turbocharging when it was still a novelty, four-wheel drive when it was still associated purely with military and agricultural vehicles, and a rally pedigree to beat all others. Fast forward 33 years and I finally got my chance to drive the icon, courtesy of Great Escape Cars of Redditch. 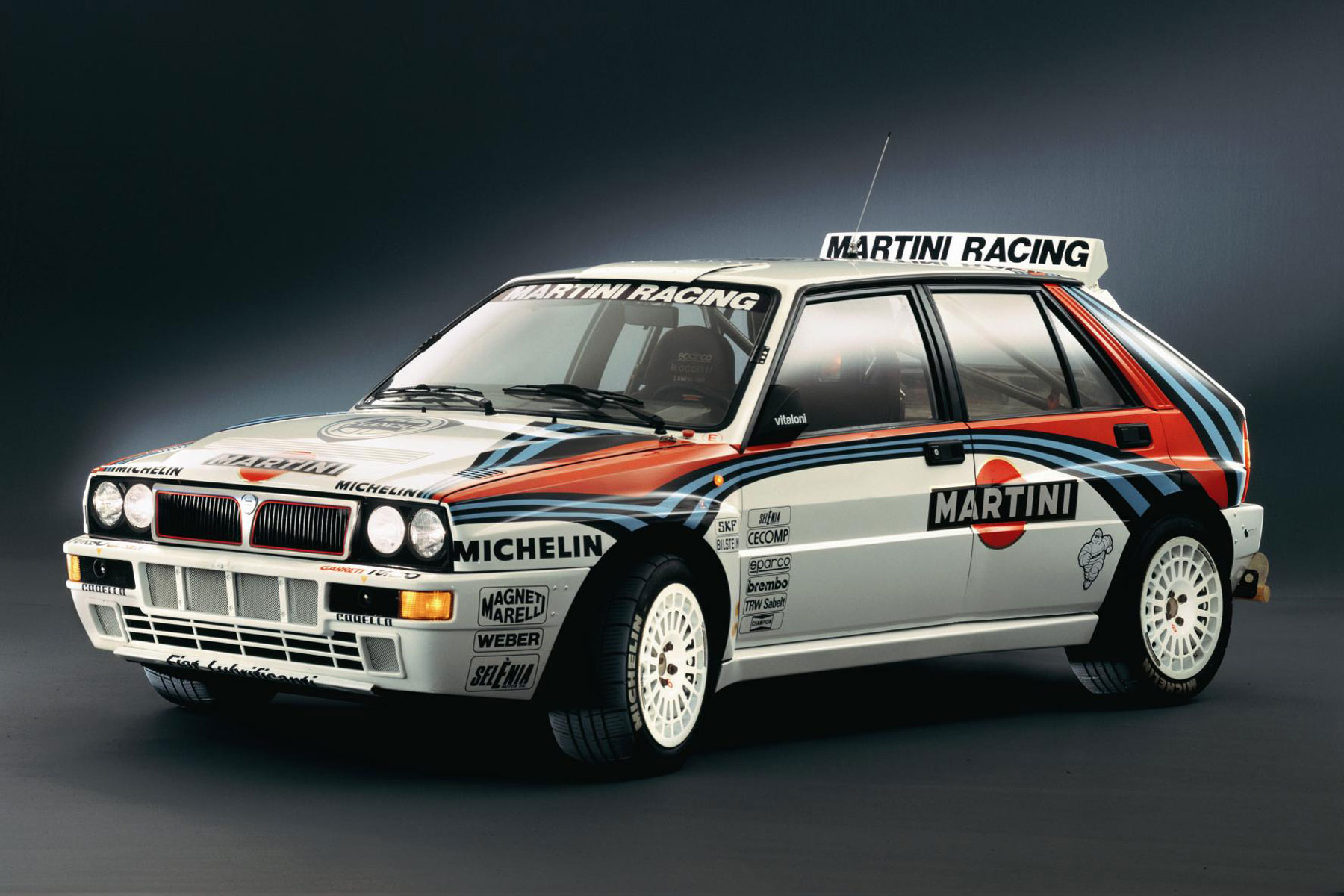 This depends on when you ask the question. Back in the early 80s, the Quattro’s performance earned it the right to be considered alongside the likes of the Porsche 944 Turbo and the Lotus Esprit, while judged as a family car it was almost without peers.


Today, the Audi ur-Quattro is ranked alongside the likes of the BMW M3 E30 and Lancia Delta Integrale among performance legends of the 1980s, as well as the greatest performance cars of all time. In short, the Quattro sits at the top table of the automotive elite. 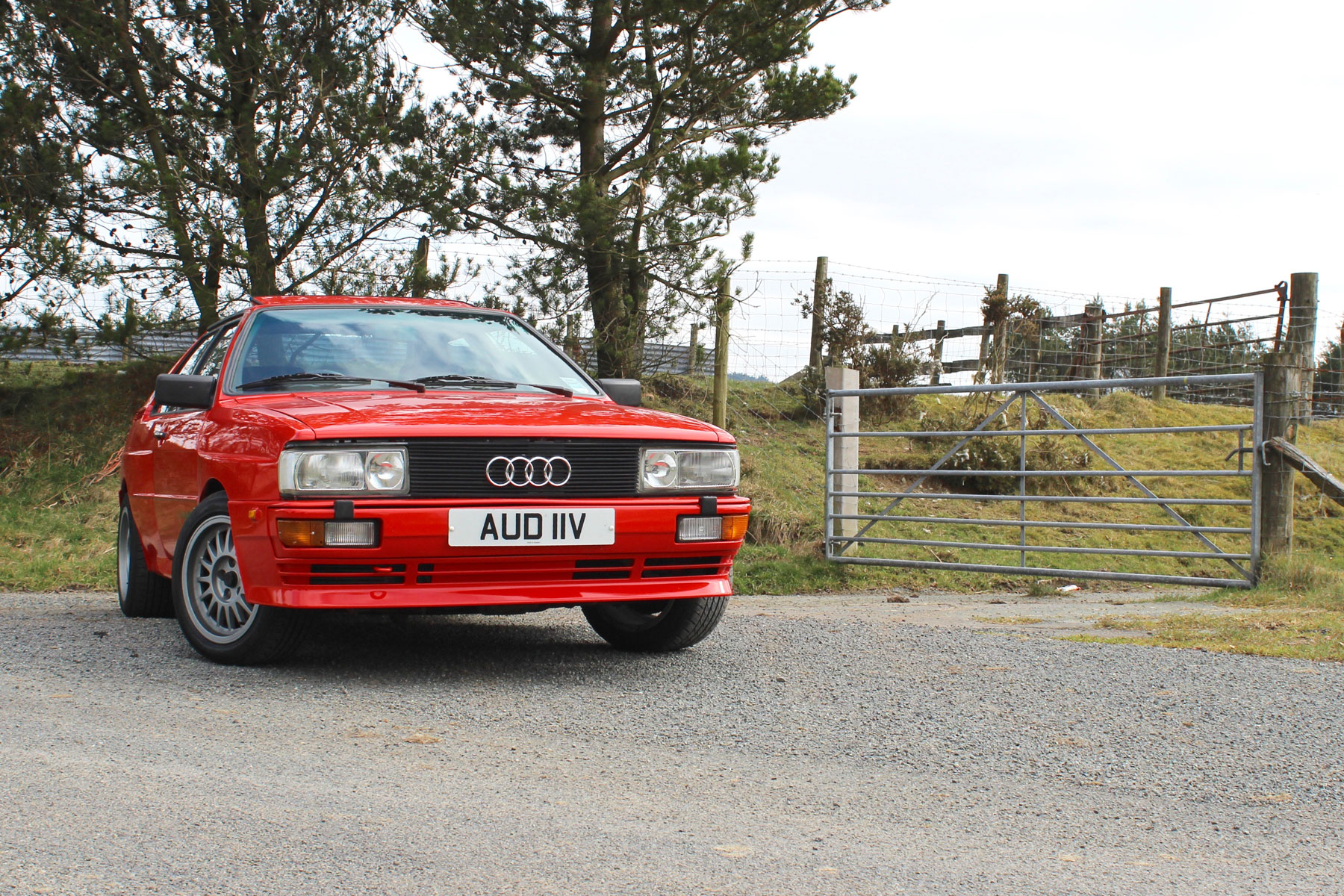 Audi’s famous five-cylinder engine made its debut in the Audi 100 of 1976, while the 2,144 cc unit found in the Quattro was a 200 hp version of the turbocharged engine that powered the Audi 200 luxury car.

Audi added an intercooler to provide the additional power, delivering a top speed of 137 mph and a 0-60 mph time of 7.1 seconds. Quick enough, but the real revelation was the traction and grip offered by the Quattro four-wheel-drive system. 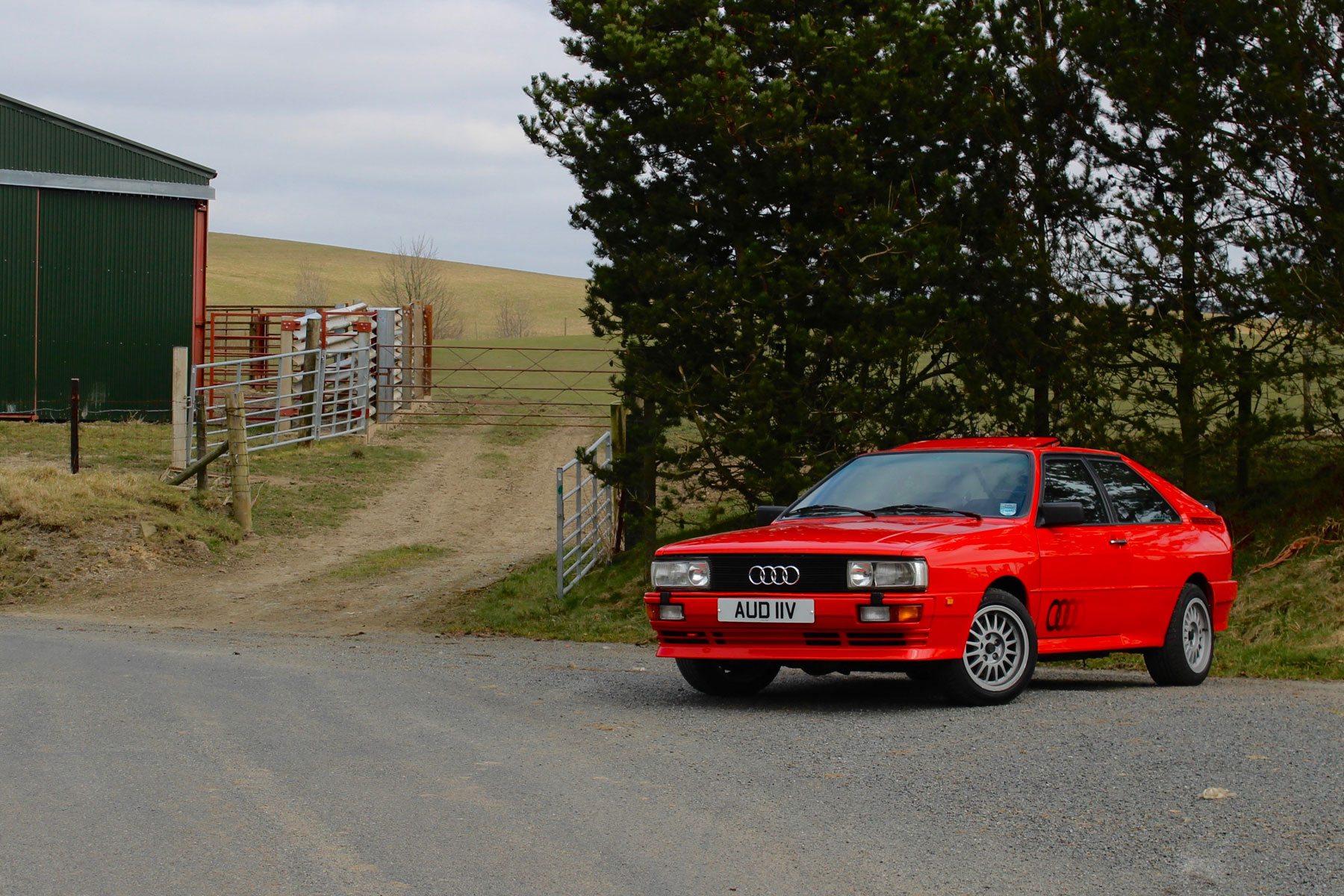 I don’t mind admitting I had butterflies in my stomach as I sauntered up to the icon, ignition key in hand. What if it didn’t match the dreams of my youth? What if Old Father Time had rendered this hero of yesteryear obsolete and out of touch? Insert cliche about meeting your heroes.

Not only that, I’d be driving the icon in Wales – the ideal playground for a car with such a deep-rooted rally pedigree. I needn’t have worried. Twist the key (no starter button nonsense here) and the straight-five stirs into life like a dragon waking from its slumber. It’s one of the most evocative soundtracks in the world and it’s central to the Quattro experience.

The idle is erratic, encouraging you to blip the throttle before take-off. Once free of 30 mph zones and the many sheep, the Mars Red Quattro begins to show its true colours. The turbo lag is the stuff of legend and it’s there in abundance. Floor the throttle and… wait for it… the Quattro shoots for the horizon at an alarming rate. 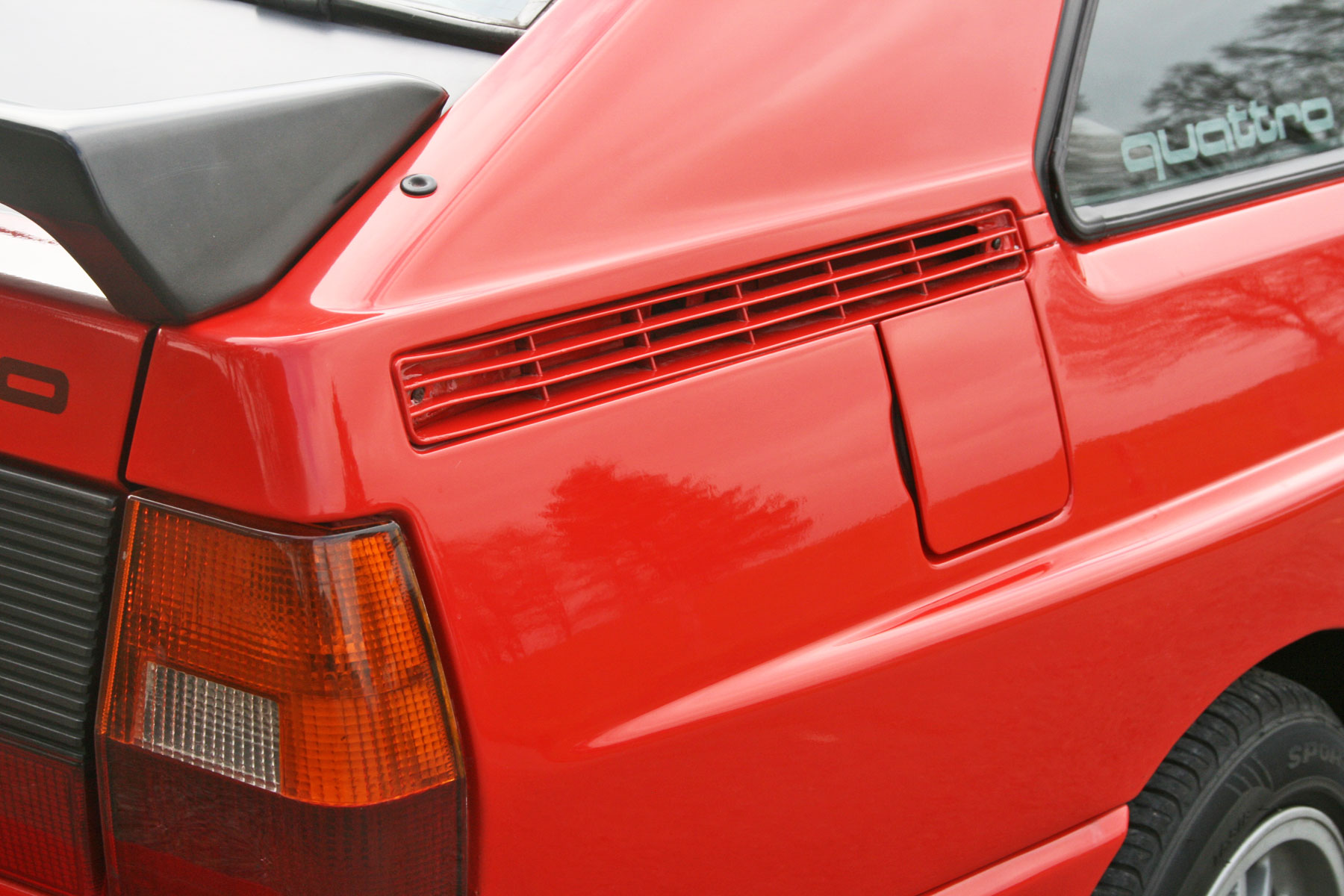 The steering wheel, refreshingly free of buttons but blessed with 80s-tastic ‘turbo’ badge, is surprisingly communicative, while the tall sidewalls give the impression of being perched high above the road. This is no low-slung sports car, but you soon learn how best to approach this retro legend.

The key is to hit the brakes before the entry to the corner, maintaining engine speed through the bend, before hitting the gas to power out the other side. It’s an intoxicating experience, with the slightly ‘wooly’ gearchange (this car has done 174k miles) simply adding to the sense of involvement. It will run wide if you overdo it, but lift off and the Quattro falls back into line.

It’s not perfect. After 174,000 miles, the gearchange is less than precise, while the brakes take a bit of getting used to. But it all adds to a timeless experience. A smoothed-out version of the Quattro would be less desirable, less memorable. 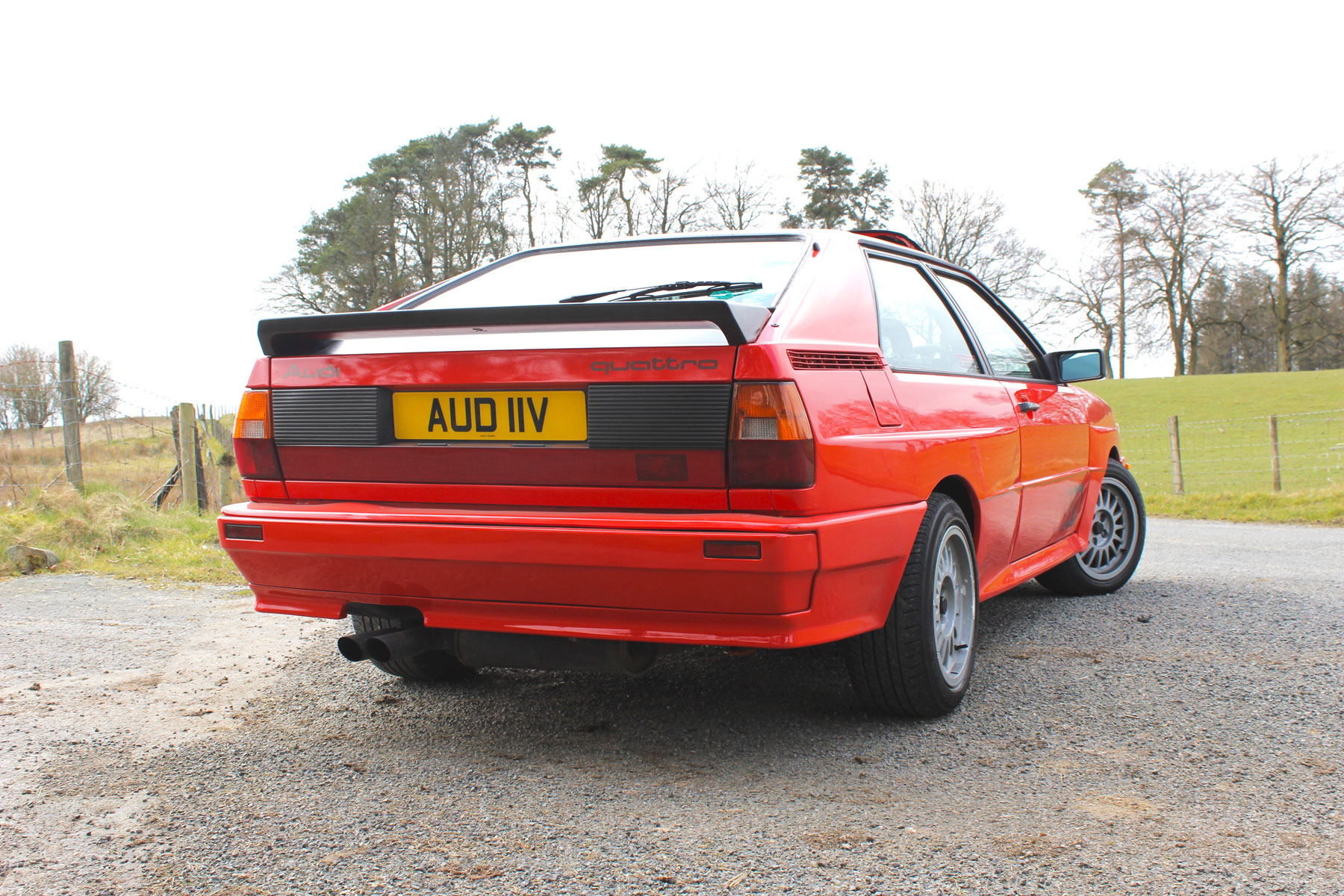 The Audi ur-Quattro won’t be a cheap car to run. Assuming you can live with the fuel economy, which is likely to be in the mid to low 20s, there’s the small matters of parts availability and the cost of servicing to consider.

Well-maintained, these cars are capable of covering mega-miles, but keeping one in perfect running order won’t be easy. A cheap Quattro is probably ‘affordable’ for a reason. 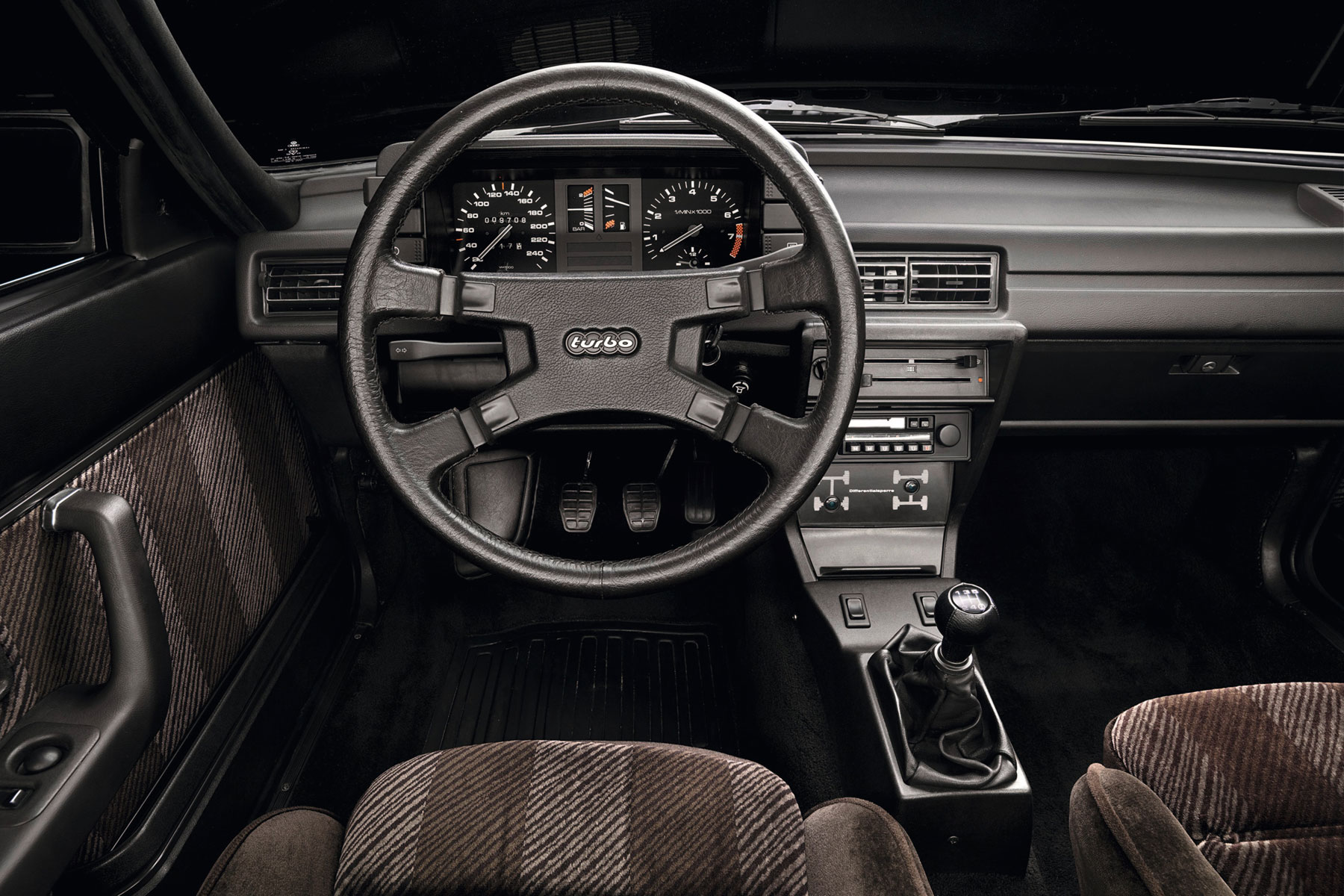 On the other hand, this is definitely a car you could live with every day. It’s a surprisingly easy car to drive, even around town, while the narrow pillars and sheer expanse of glass provide good all-round visibility. There’s also plenty of room in the cabin, although don’t be fooled by the car’s shape, because the boot is surprisingly small.

If you do decide to drive your Audi Quattro every day, we applaud you. Just be prepared for countless admiring glances and the occasional thumbs up from pedestrians. Gene Hunt has a lot to answer for. 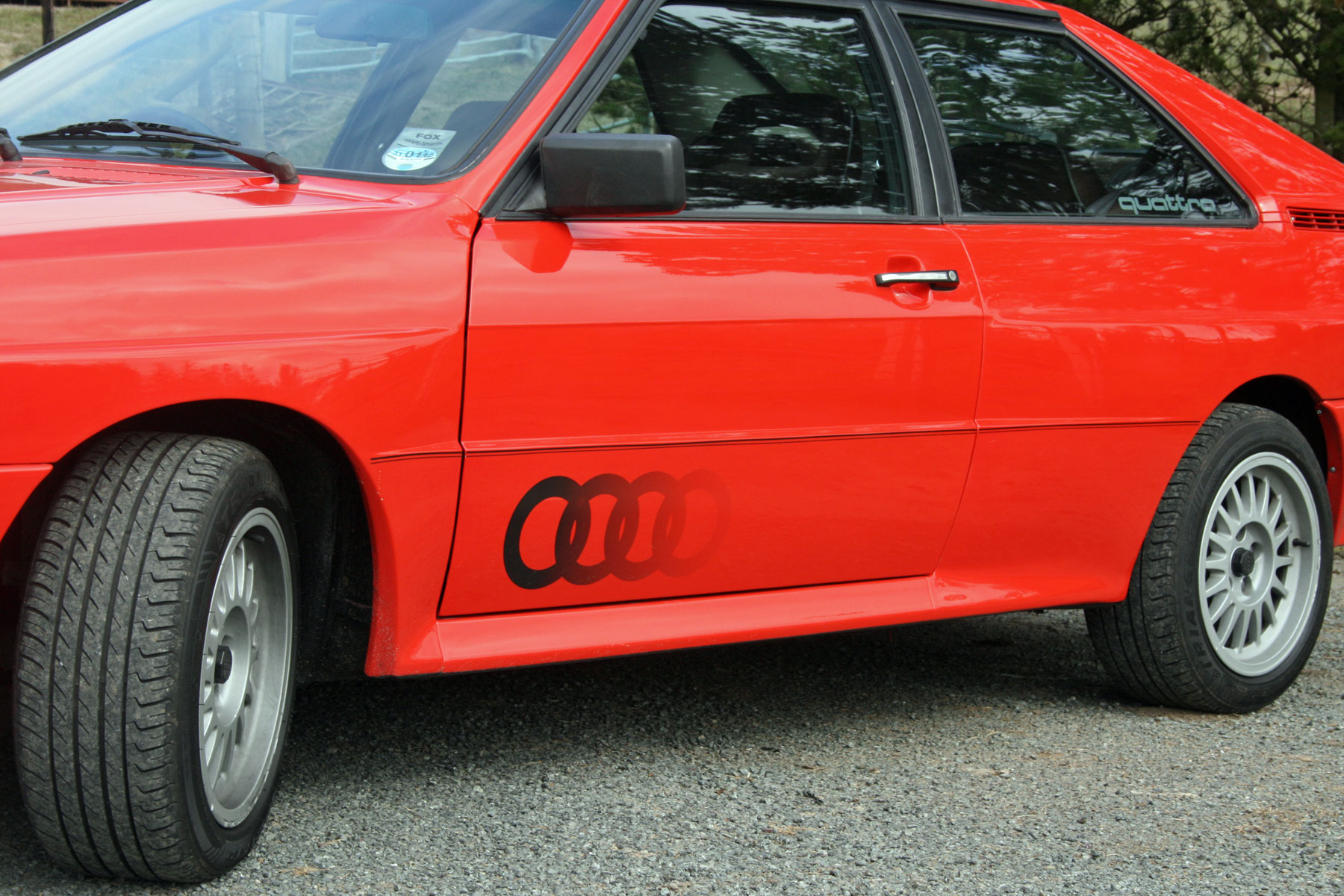 The simple answer is: as much as you can afford, and then some. According to the Practical Classics price guide, £2,500 gets you a Quattro in need of a rebuild, while you’ll be forced to part with well over £20,000 for a late and ultra-desirable 20-valve.

In reality, you could end up paying much, much more. We’ve seen ‘barn-finds’ sell for just under £10,000, while cars with provenance and concours-winning potential command fees around the £30,000 mark.

Rot. These cars are now three decades old, so corrosion may have taken hold. If the car has been repaired, make sure the work was completed by a reputable company. Also, beware of resprays that might be hiding a multitude of sins.

You’ll also notice that the interior isn’t screwed together in quite the same way as modern Audis. This isn’t meant to be a criticism, simply a warning that you might need to replace certain parts. If in doubt, take a specialist with you when viewing the car. 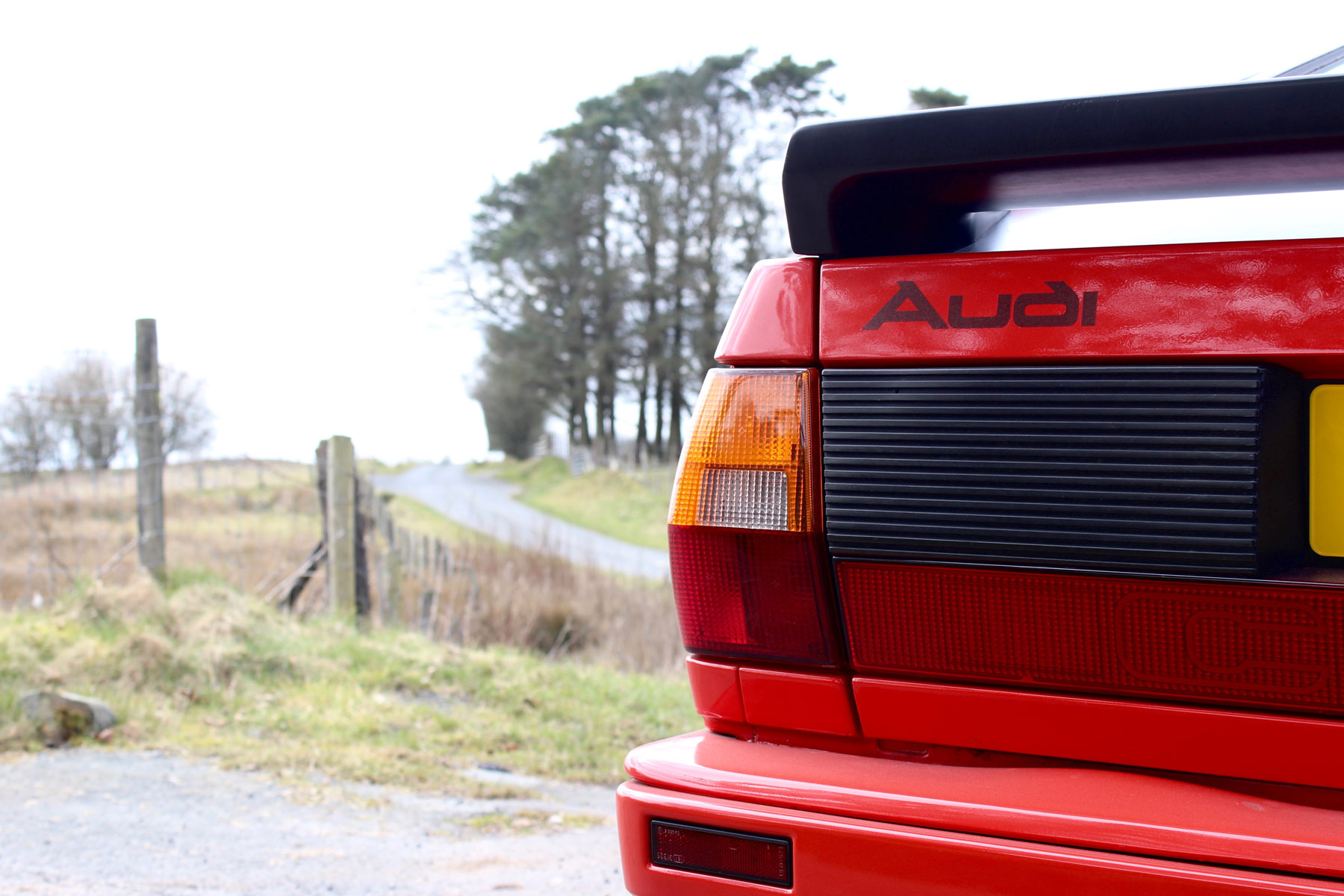 Of course you should. This is a bona fide legend of road and track, so you’re unlikely to lose any money if you buy a good one. Given the prices being asked for certain fast Fords and a particular hot Pug, we think £20,000 is a small price to pay for a car that changed the fortunes of an entire car company and revolutionised world rallying. In fact, we think it’s a bit of a bargain. 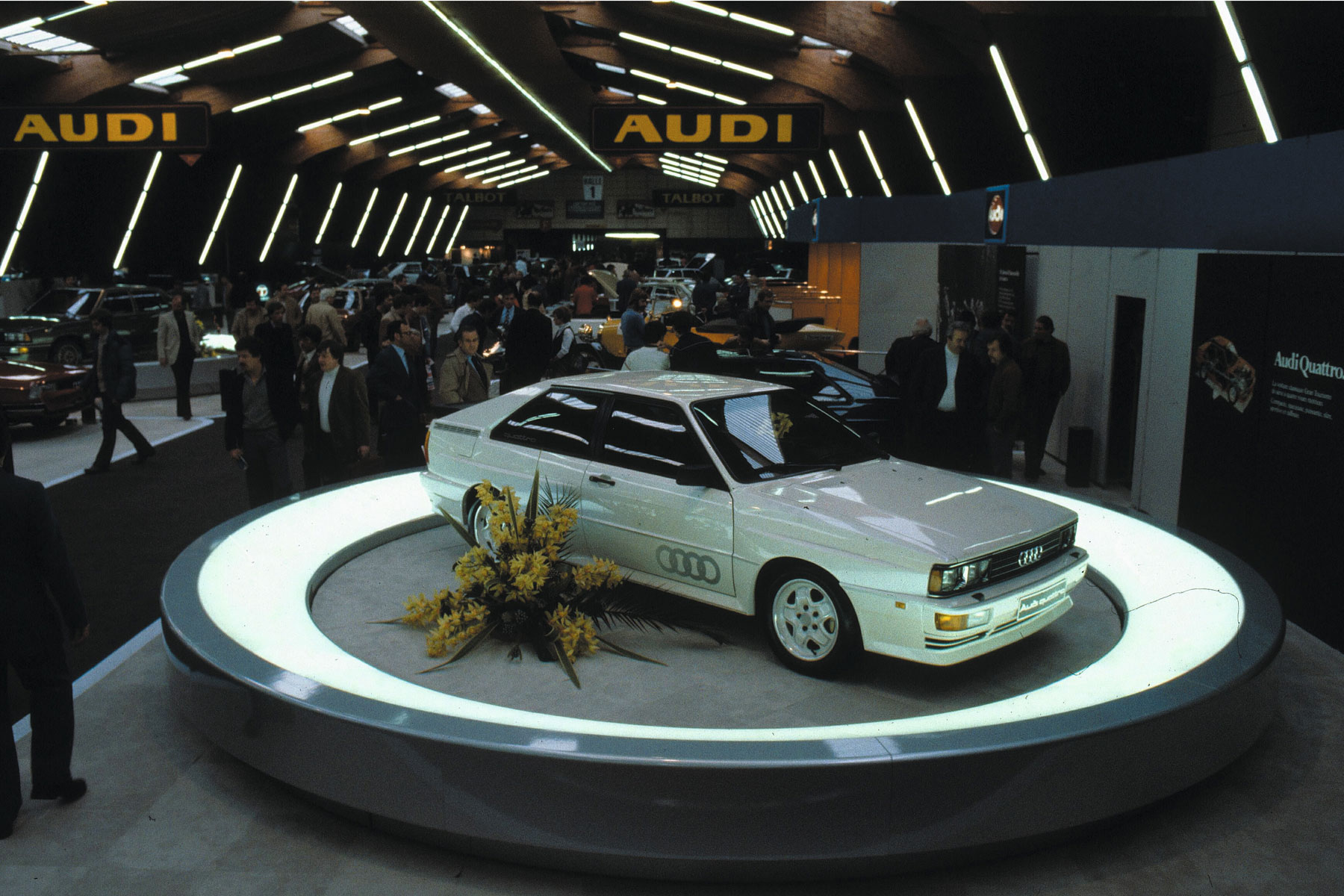 The ur-Quattro (‘ur is German for ‘original’) was the first 4×4 road car to be sold in Europe since the Jensen FF of the late 1960s. Other 4x4s were SUVs in the style of Range Rover and Jeep, although the Subaru Leone and AMC Eagle bridged the gap between smooth and rough roads. The Quattro itself can trace its roots back to a primitive 4×4 system for use in the Volkswagen Iltis military vehicle.