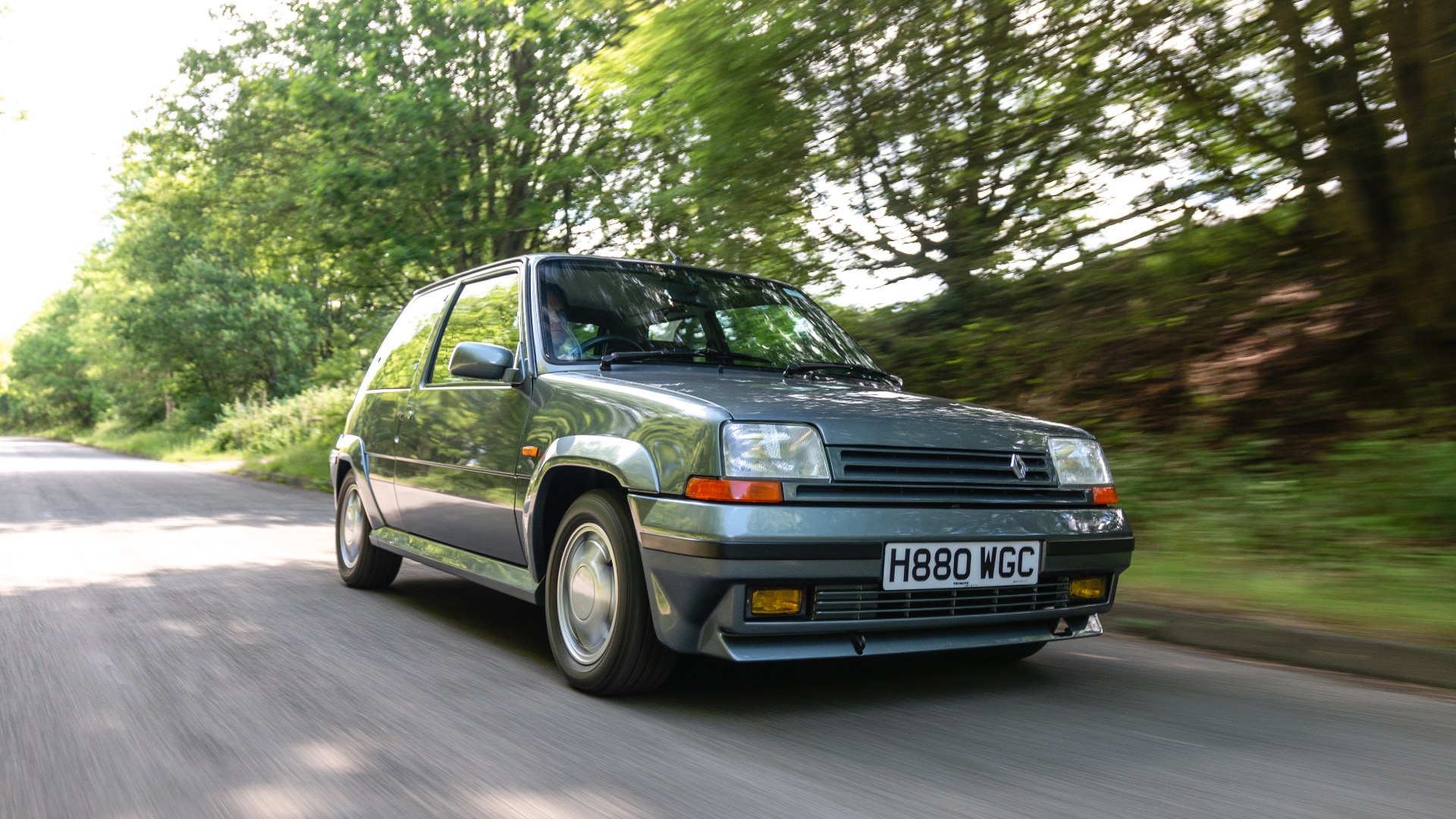 When I was 17, there were two things I yearned for: a girlfriend and a Renault 5 GT Turbo. I eventually acquired the former (credit: Dutch courage and Clearasil), but the latter slipped through my fingers.

Fast-forward two decades and the fast Five is no longer the darling of sex-starved teenagers, Maxers and TWOCers: it’s now a bona fide classic car. And with prices for 80s hot hatches spiralling skywards, you may have already missed the boat.

Renault 5 GT Turbo. Ever see one back in the day that DIDN’T have its yellow fogs blazing?

This 1989 Phase Two GT Turbo belongs to Renault UK and must be one of the few completely standard examples left. As it emerged from the delivery truck, squat and perfectly proportioned, the excitement in the MR office was palpable. How would it measure up on the road?

Can a 122hp hatchback still excite in 2019? Or is the Supercinq, like an inexpedient ex., better left in the past?

Think ‘1980s hot hatches’ and one car above all comes to mind: the Peugeot 205 GTI. However, for all the 205’s fleet-footed brilliance, the standard (1.6-litre) version is outgunned by the GT Turbo for power and acceleration. And the Renault is cheaper to buy. More on that later.

The Golf is the sensible choice (no change there, then) while the Fiesta offers rough-and ready fun. As for the Fiat, finding one will be your greatest challenge; there is just one for sale in the UK at the time of writing. 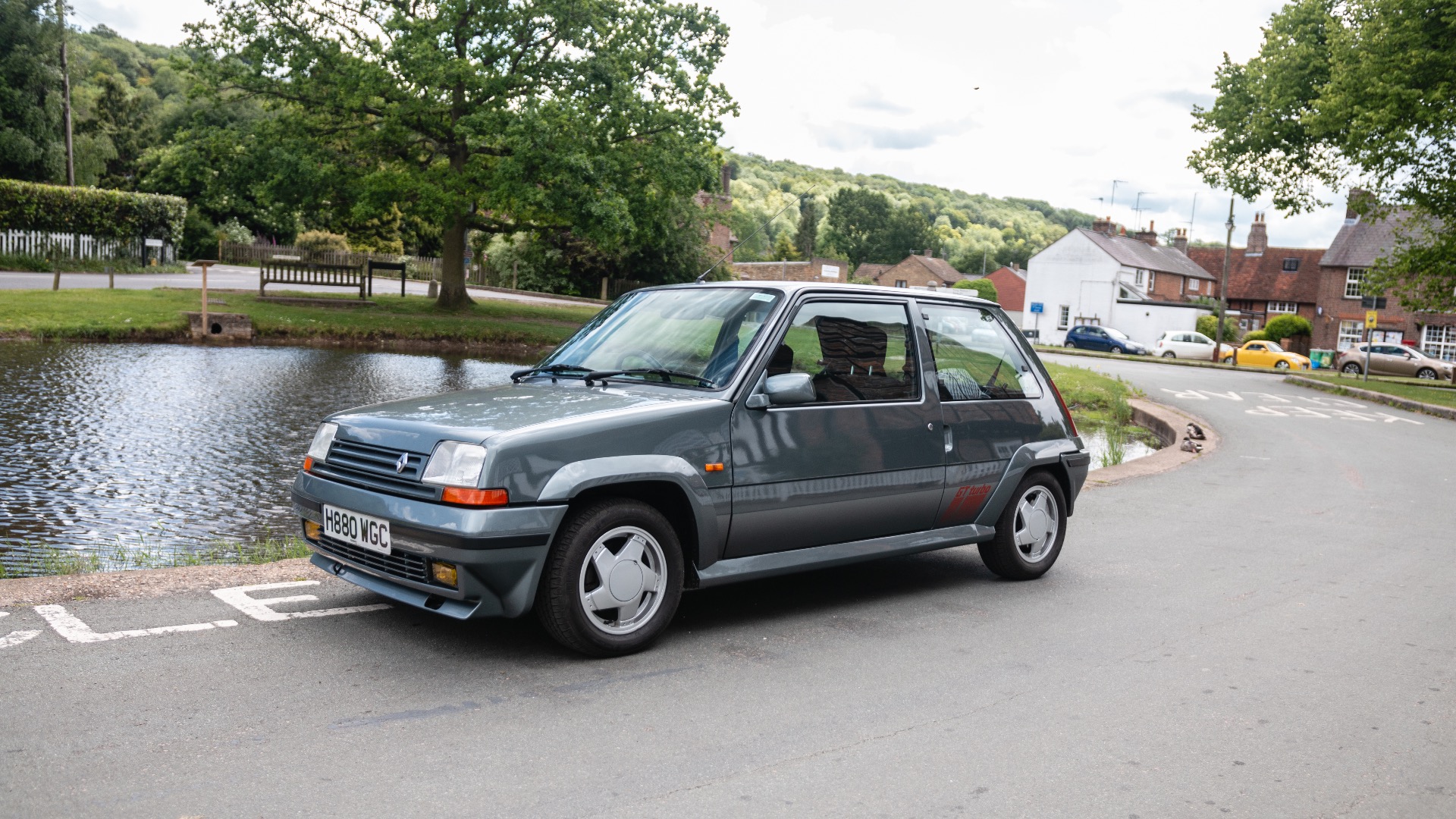 Unlike the original, mid-engined Renault 5 Turbo, the GT Turbo’s powerplant isn’t shoehorned behind the seats. Instead, it resides beneath the front-hinged bonnet, driving the front wheels through a five-speed manual gearbox. So far, so conventional.

But Renault had secret weapon. Clamping a turbocharger to the humble 1.4-litre lump unleashed 117hp from launch in 1985, upped to 122hp in Phase Two models from 1987.

In a car weighing just 853kg (the outgoing Renaultsport Clio weighs around 400kg more), 0-62mph took 7.5 seconds and a top speed was 120mph. As the TV ad of the time gleefully revealed, the 5 left the 205 and Uno trailing in its wake. 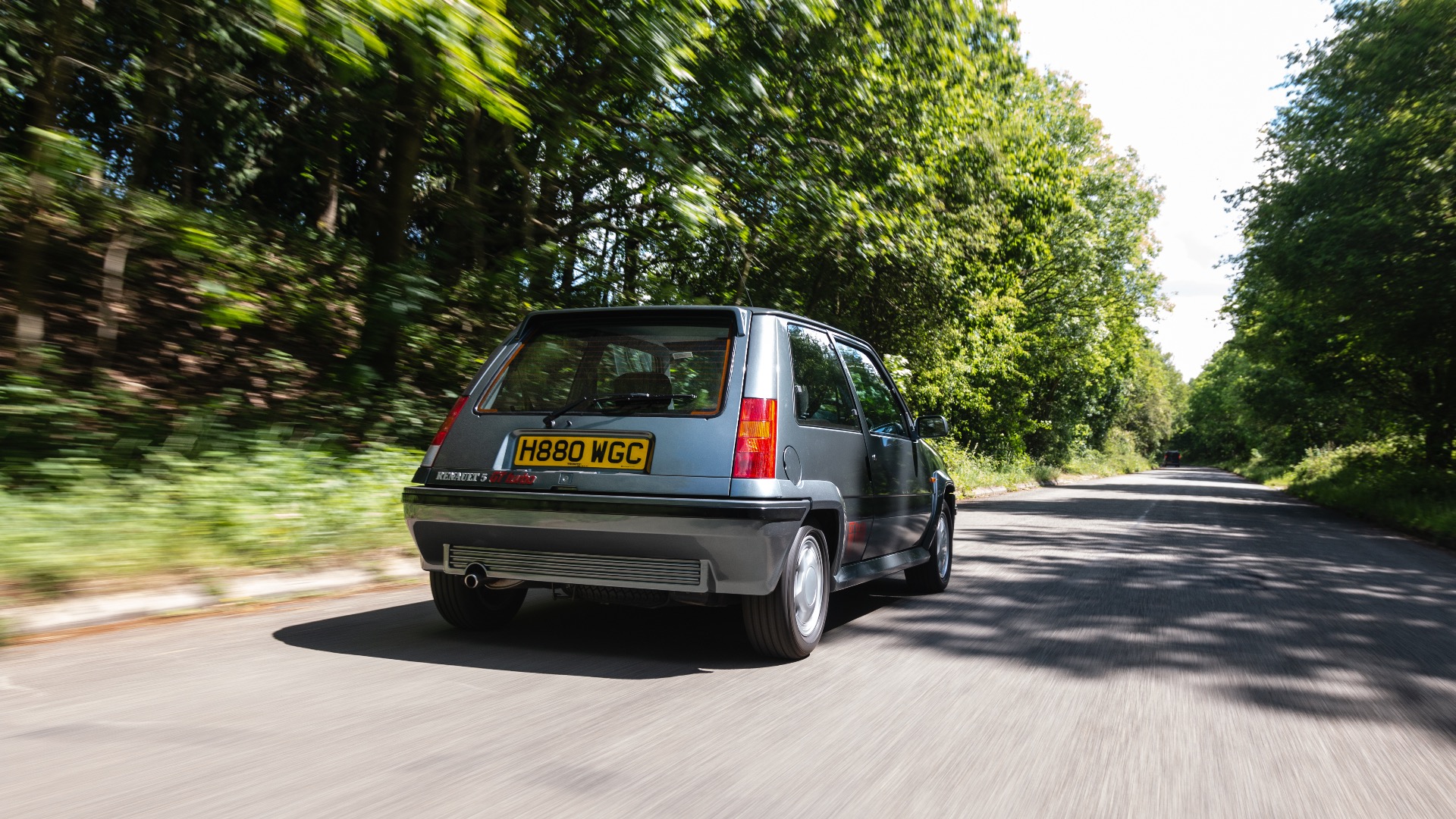 A reminder of what good, old-fashioned turbo lag feels like. Up to around 4,000rpm, the 5 feels decidedly ordinary, certainly not quick. Then the Garrett blower takes a breath, the steering wheel squirms and you blast forwards, grabbing the next gear in a fabulous, frenetic rush.

Car manufacturers have spent years ironing out the on/off effect of turbo lag. However, for me at least, this belated blast of boost is a big part of the retro Renault’s appeal. It’s a nitrous hit for the head, one that provokes me into driving this 29-year-old classic harder than I probably should.

The car’s’s dynamic repertoire is a bit of a mixed bag, too. The steering is direct, but lacks the telepathic connection of the 205, while ride comfort is poor – despite tiny 13-inch alloys and 55-profile tyres. As with the powertrain, you need to up the pace to make the Five come alive.

Grab it by the scruff and the GT Turbo is still a quick cross-country machine. The front end bites hard into corners, pulling the rear around neatly with barely a hint of body-roll. Commit yourself and it will cock an inside wheel in classic 80s hot hatch style, but don’t worry – there are no snap-oversteer demons here. The brakes are better than many cars of this era, too. 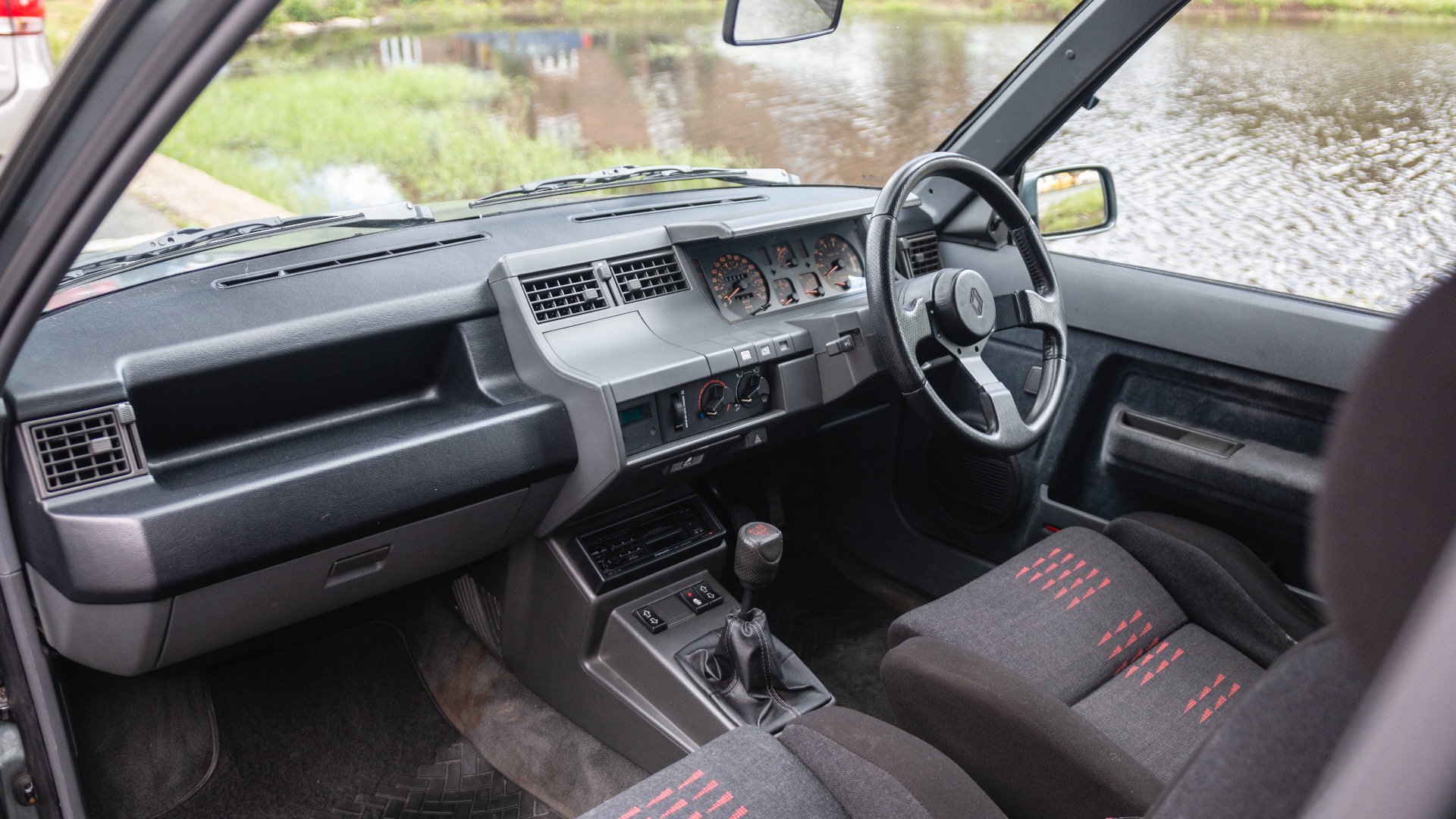 Funky and flaky in equal measure, the Renault 5’s interior conforms to every cliché about old French cars. Speed humps and potholes are greeted with a chorus of plastic squeaks, while one of the minor gauges nonchalantly went on strike mid-drive.

Of greater concern is the temperamental Turbo’s dislike of hot starts. Tweaks to the Phase Two cars, including revised ignition mapping and a water-cooled turbo are said to have improved matters. Nonetheless, be prepared for less-than-perfect reliability.

On the plus side, classic insurance means the GT Turbo is no longer an underwriter’s bête noire. And fuel economy of 39.8mpg (measured at a constant 56mph) still looks respectable today. 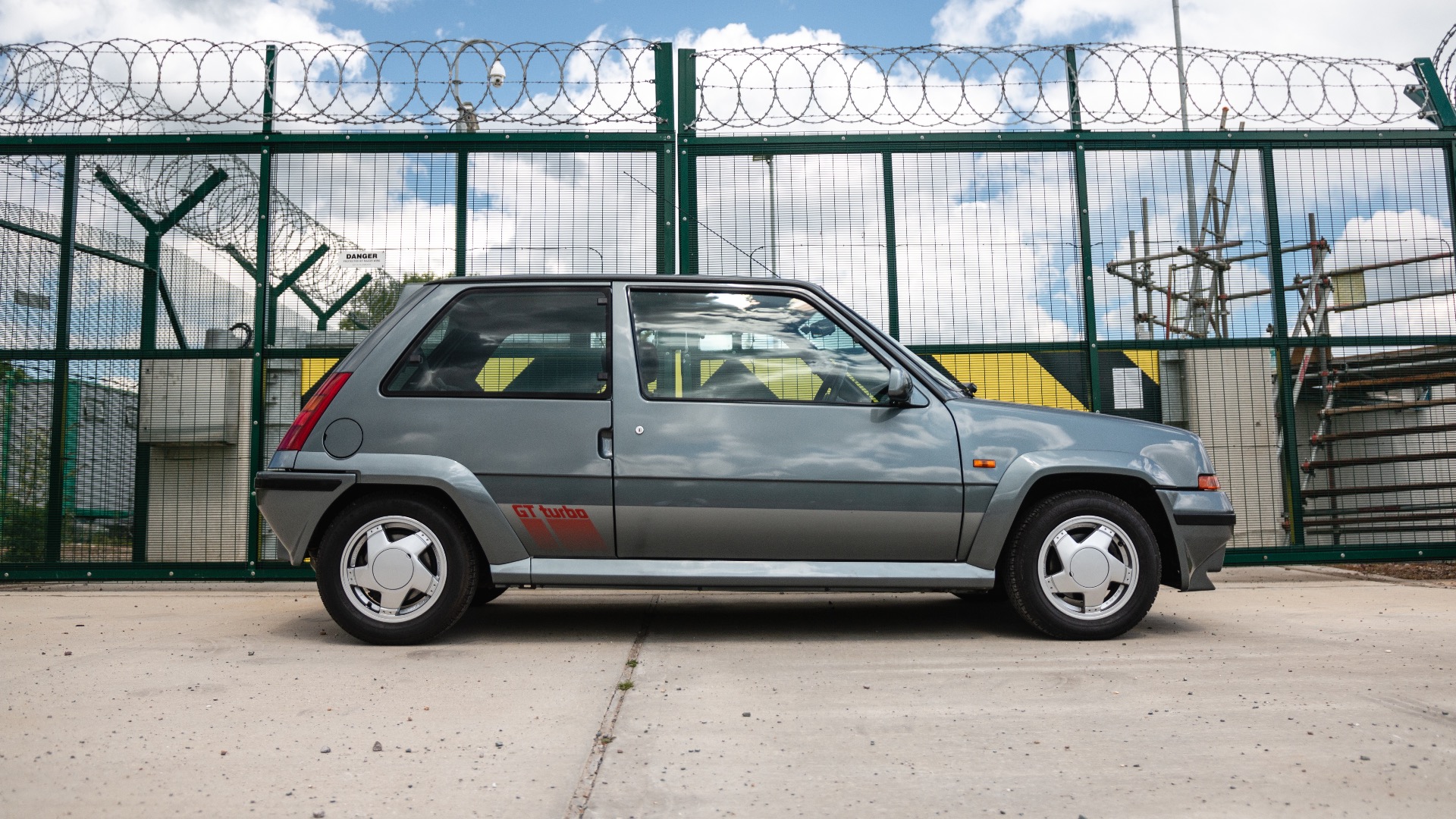 You could… but I’d advise against it. Rain and road salt will ravage any 30-year-old supermini. And while mechanical repairs to the simple, overhead-valve engine should be straightforward, fixing bodywork is a pricier problem.

I’d keep my GT Turbo garaged over winter and save it for the summer months. Indeed, secure storage is advisable year-round; these cars hail from the ‘coathanger and screwdriver’ era of car theft. Fit a tracker to protect your investment, too.

Lastly, the 5 also comes from a time long before Renault aced Euro NCAP crash tests. There’s no safety equipment to speak of, its doors are barely thicker than a biscuit tin and the interior trim has all the structural integrity of a croissant. This is a car for clear June mornings, not murky January evenings. 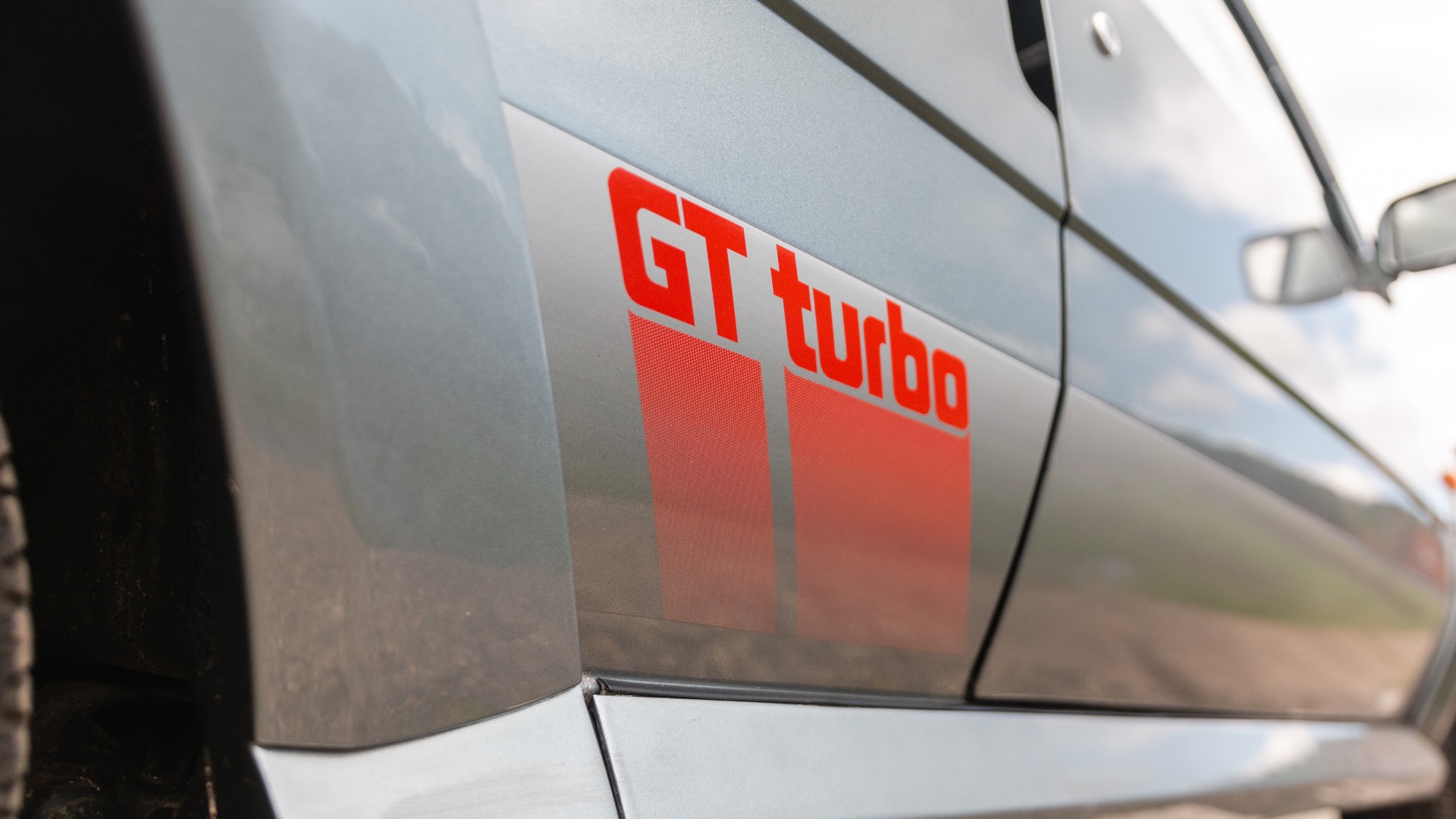 ‘A lot more than a few years ago’ is the short answer. Like all hot hatches of the 1980s, the Renault has rocketed in value as folks who grew up lusting after them finally have the wherewithal to buy them.

There’s another factor here, of course: attrition rate. Many GT Turbos were crashed and many more modified, leaving few good examples left. I found less than 20 GT Turbos for sale, and only a handful of those were standard-spec.

Starting price for a project is around £4,000, with decent, usable cars costing from £7,000. You’ll pay around £15,000 for a rust-free, original car like the one here: on par with a Mk2 Golf GTI, but still cheaper than many fast Fords. It’s also around half the price of an equivalent 205 GTI. 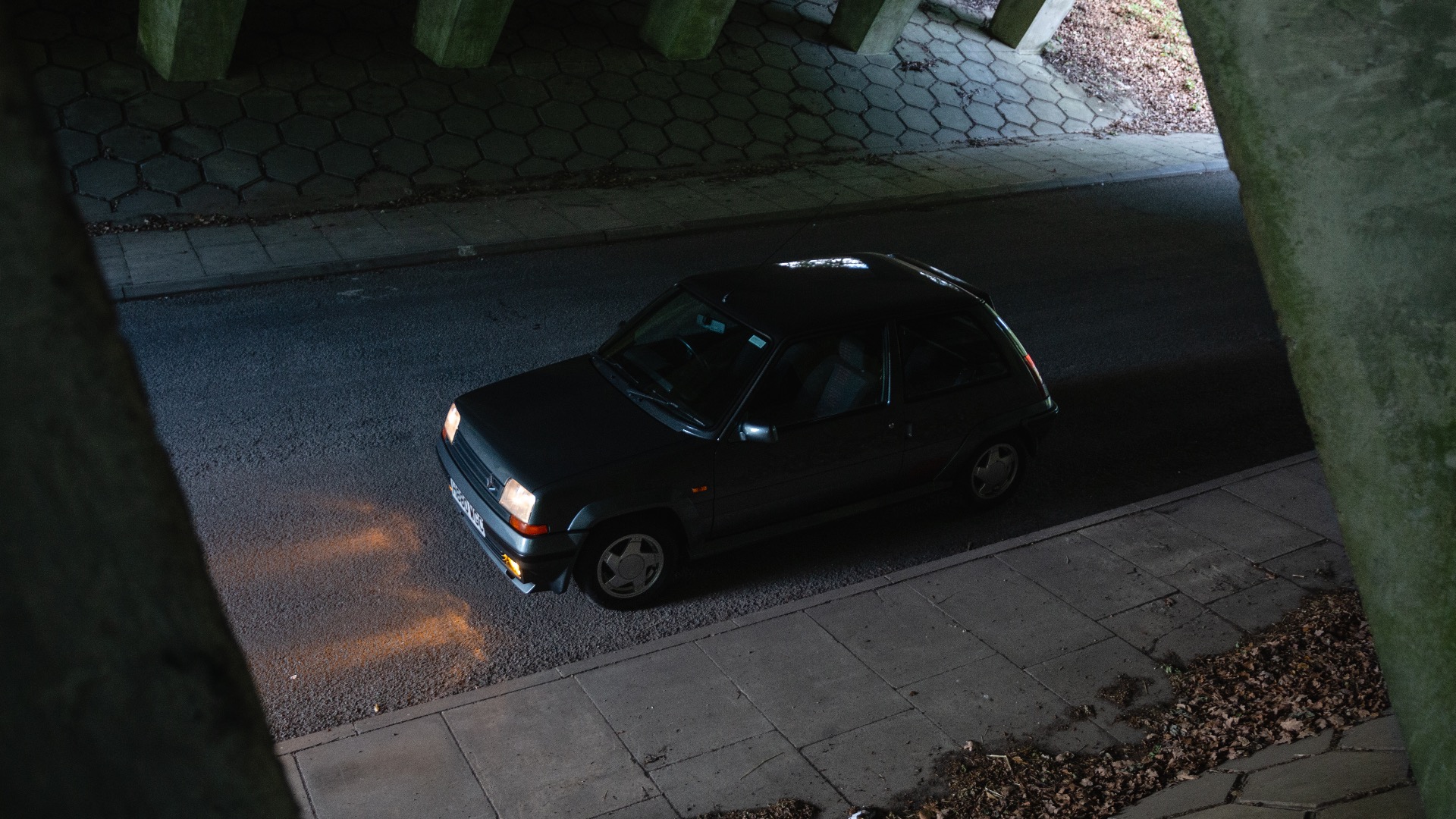 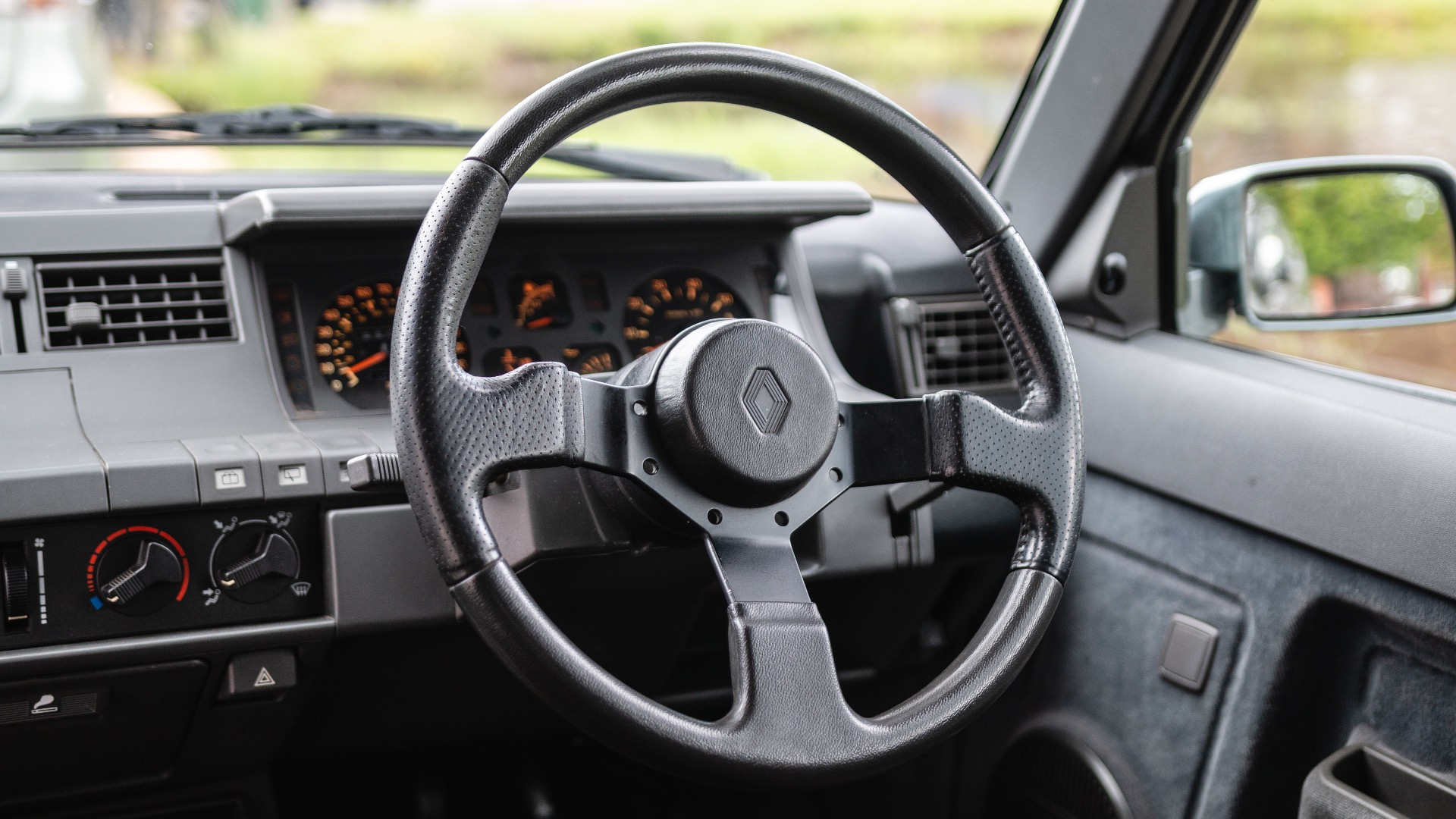 Like yours truly, the GT Turbo feels its age. From its modest power output to its frankly woeful build quality, it shows just how far cars – in particular hot hatches – have progressed in three decades.

No matter. Driving this pocket rocket made me feel 17 again. And, before you ask, that’s a vibrant, devil-may-care 17, rather than a greasy, socially-awkward one. The Renault goads you into driving fast, then rewards with flashes of boisterous brilliance when you do. It’s flawed, but beguiling.

Yes, a 205 GTI is ultimately more fun. And a Golf GTI will be easier to live with. But if you grew up lusting after a GT Turbo, neither of those facts may matter. Buy carefully and Régie’s little ruffian could prove a sound investment, too. Time to hit the classifieds… 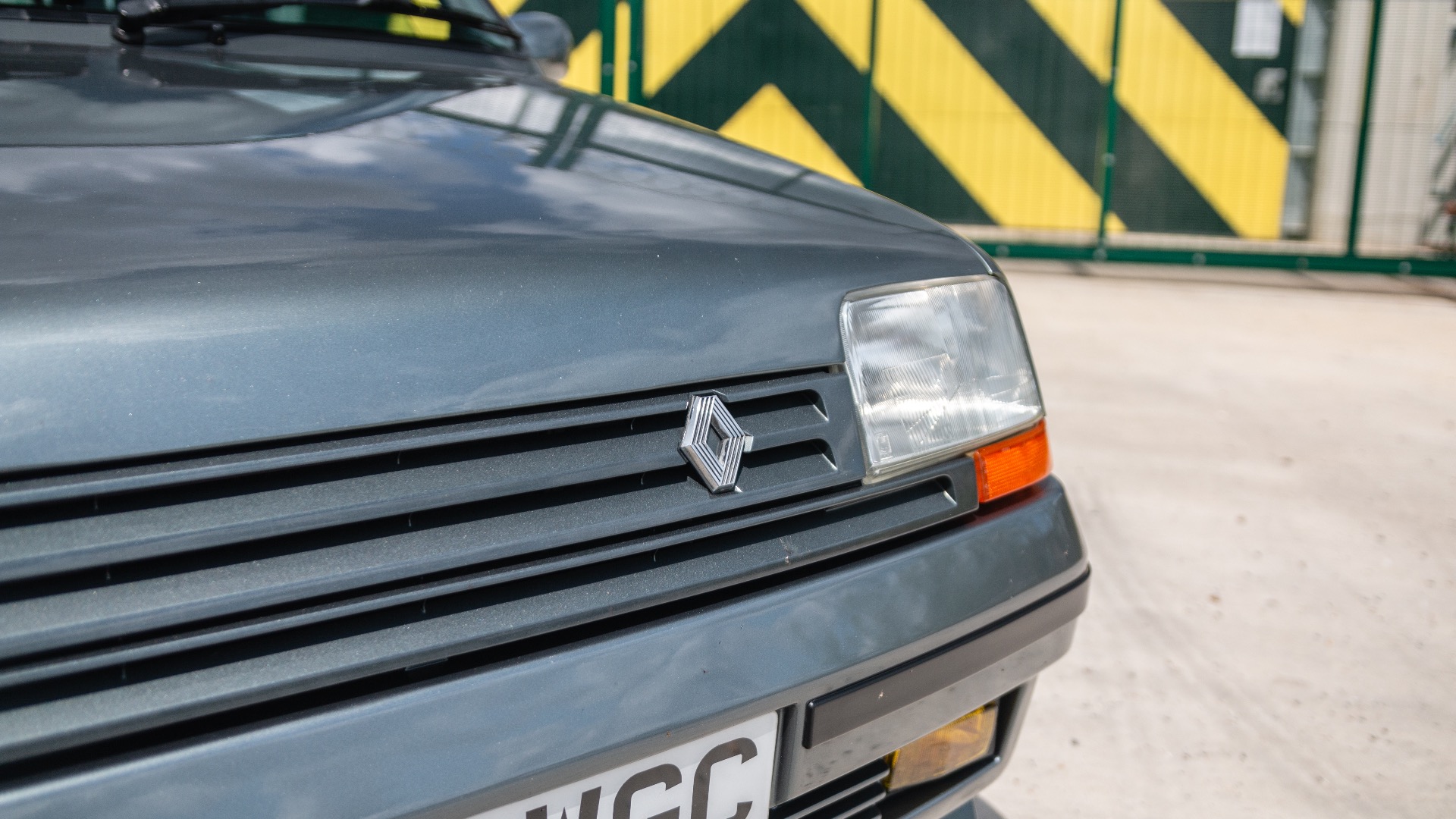 The original 1980 Renault 5 Turbo was a homologation special: bred for rallying, then sanitised (a little) for the street. It had a 160hp 1.4-litre engine atop the rear wheels, making it the most powerful French car at the time.

Renault’s second bout of mid-engined madness came 18 years later, with the Clio V6 of 1998. Read our Clio V6 Retro Road Test to see how this hyper hatch stacks up today.