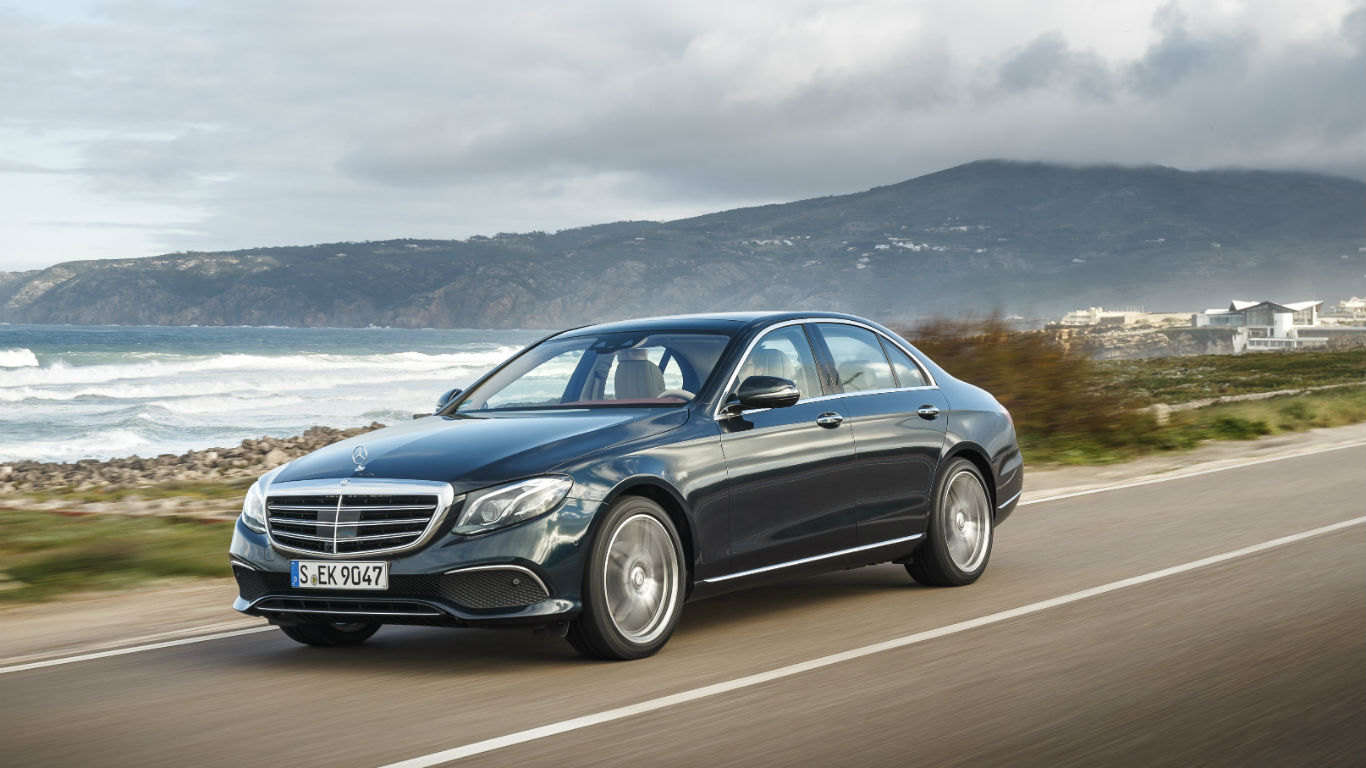 “O Lord, won’t you buy me a Mercedes-Benz” wailed Janis Joplin in 1970. Back then, of course, buying a Mercedes was a far simpler affair. Janis would have been limited to several rather staid saloons, or the fabulous ‘Pagoda’ SL roadster.

Today, Mercedes’ vast line-up stretches from SUV crossovers to shooting brake estates, offering buyers an embarrassment of riches. Yet the Mercedes-Benz E-Class remains at the very core of the range. In various guises, it has been the benchmark luxury saloon for more than 60 years.

So, with the weight of history heavy on its shoulders, Mercedes is pulling out all the stops for its new, 10th-generation E-Class. It promises ‘the most intelligent business saloon’. Does it deliver?

Let’s start with the technology, which is probably way beyond anything Janis ever dreamed of. Having unlocked the car using your smartphone, you’re greeted by a widescreen digital dashboard, plus ambient LED lighting in 64 colour choices. Touch-sensitive buttons on the steering wheel offer Bang-and-Olufsen-style cool.

The E-class can’t quite drive itself, but only because legislation won’t allow it. The optional Drive Pilot system (£1,695) follows other cars at up to 130mph, using sat nav and road sign recognition to keep you within speed limits. The car will assist with steering to help you change lanes, provided it detects the lane is clear, while Evasive Steering Assist helps you avoid any pesky pedestrians that cross your path.

The latest E-Class also majors on efficiency – at least until the bombastic AMG E 63 version arrives. A new 194hp 2.0-litre diesel engine returns a thrifty 72.4mpg in official fuel economy tests, along with CO2 emissions of just 102g/km. Later this year, we’ll also see a 286hp plug-in hybrid, which ekes out 134.5mpg and 49g/km. All cars come with a nine-speed automatic gearbox – there is no manual option.

And what of the styling? It seems almost churlish to criticise Mercedes for its ‘Russian doll’ approach to design when most of its competitors do the same. And the E-class is certainly a handsome car in the metal, with broad shoulders and an elegant coupe-like roofline.

Mercedes-Benz E-Class: On the road

We already know the E-Class can pretty much drive itself, but what is it like with a living, breathing human behind the wheel?

Tyre-smokin’ AMG versions aside, the E-Class has always been a car to soothe the senses, not stimulate them. Its traditional strengths are comfort and ease of driving; it has never aspired to be a ‘sports saloon’ like the BMW 5 Series or Jaguar XF.

We started our test drives in the entry-level E 220d, which will account for the majority of sales. The car accelerates briskly (0-62mph in 7.3sec) and very smoothly, aided by a nine-speed automatic ’box that is operated via a column behind the steering wheel, in trad-Mercedes style.

Leaving Lisbon on the auto-estrada, what’s immediately noticeable is the noise – or lack of. Thank the new, much-quieter diesel engine and the E’s slippery shape. With a drag coefficient of 0.23, it’s the most aerodynamic car in its class.

The steering is light, and the plethora of driver aids – including active cruise control and lane-change assist – make for a relaxing drive. This is what the E-class does best; it’s still a car that you could drive for hundreds of miles and emerge feeling fresh.

Climbing into the rock-strewn hills of Cascais, the Mercedes starts to feel out of its comfort zone. On blistered, broken Tarmac that would be a familiar sight in the UK, the ride isn’t as absorbent as you might expect. And while switching into Sport or Sport+ modes sharpens up the handling, it can’t provide the exquisite driver feedback of a Jaguar XF.

The hybrid E 350d will be more expensive still, and thus only makes financial sense if you have charging points at home and at the office. It’s even quieter than the diesels, and the transition between petrol and electric power is almost imperceptible. Mercedes’ use of a conventional automatic gearbox is a plus-point, too – as anyone who has sampled the whiny CVT ’boxes of Lexus and Toyota hybrids will testify.

Lastly, a quick word about the Multibeam LED Intelligent headlights. Available as part of the Premium Plus pack (£3,895), they ‘blank out’ parts of the main beam, allowing you to drive with full headlights on at night. As an oncoming car approaches, the area of blanked-out light widens to compensate, meaning the other driver won’t be dazzled. It’s clever and, on dark mountain roads, proved very effective.

Mercedes-Benz E-Class: On the inside

Many people’s first taste of the E-Class will be from the back seat, as a passenger in a minicab. The car frequently serves as an upmarket alternative to a Toyota Prius or Ford Galaxy in the UK. In Germany, meanwhile, the E-Class is simply the default taxi – usually seen sporting yellowy-beige paint and a six-figure mileage.

If you’re lucky enough to have ‘James’ doing the driving, the mid-size Merc is a pleasant place to spend time. The sweeping roofline doesn’t restrict rear headroom, the soft leather seats are very supportive and refinement is excellent. The only minus point is the large transmission tunnel, which forces a fourth passenger to seat with legs awkwardly splayed.

Mercedes-Benz dropped the ball for a while when it came to quality. But those ill-fated Daimler-Chrysler years are fast becoming a distant memory, as the interior of the new E-Class attests. Build quality is hard to fault, with swathes of leather, wood and aluminium across the dashboard and doors. It’s attractive, modern and undeniably ‘premium’.

We’d advise caution with trim options, though. The wood finish in one of our test cars appeared to have been liberated from the side of a 1970s American ‘woody wagon’. And the brown leather/black plastic/white carpet combo of another was simply bizarre – not to mention impractical.

With so much technology on board, the E-Class dashboard could have boasted more buttons than a shirt factory. Fortunately, Mercedes’ Comand media system allows most ‘infotainment’ functions to be controlled via a clickwheel or touchpad behind the gearlever.

Alternatively, you can use the touch-sensitive pads on the steering wheel, which swipe left/right and up/down, just like a smartphone. It’s an intuitive solution that allows you to keep your hands safely at ten-to-two.

The ‘virtual’ dials can be customised in one of three displays: Classic, Sport and Progressive – the latter inspired by the futuristic Tron film. Those crazy Germans, eh?

We found it best to rely on the head-up display, an £825 option fitted to our test cars. The sheer amount of information displayed around the dials, from nav directions to distance from the vehicle in front, can be a little bewildering.

As with most German cars, it’s also possible – and very tempting – to add thousands to that price with extra-cost options. The Premium Pack includes keyless entry, memory seats and a panoramic sunroof for £2,795. Or you could upgrade to Premium Plus, with 13-speaker sound system and active LED headlights, for £3,895.

There’s also AMG Line body styling at £2,495 and, rather more usefully, the safety-enhancing Driving Assistance Plus package at £1,695. Oh, and don’t forget the Comand Online media system and 12.3-inch digital dashboard. Those are £1,495 and £495 respectively.

However, don’t remortgage the house just yet. The good news is that you should claw back some of that initial outlay via low running costs. Opt for the 2.0-litre diesel E 220d and claimed fuel economy is a very impressive 72.4mpg. Even the next-best-in-class BMW 520d only manages 68.9mpg.

If you can wait until later this year, the plug-in hybrid E 350e trounces those figures, with 134.5mpg (provided you charge the batteries before you set off) and a tax-free 49g/km CO2. But it will be significantly more expensive to buy – probably around £50,000.

The launch slogan for the new E-Class was ‘Efficiency. Safety. Comfort’ and in those three areas, the new car excels.

Starting with efficiency, the new 2.0-litre diesel engine is the most economical engine in its class. A claimed 72.4mpg is a real achievement in a mid-size luxury saloon, even if the real-world figure is unlikely match it.

In terms of safety, the E-Class continues to be at the forefront. Standard equipment includes automatic emergency braking and full-length roof-mounted airbags. Spend a – relatively modest – £1,695 on the Driving Assistance Plus package and you also get active cruise control, blind-spot assist, lane-keeping assist and more. Euro NCAP hasn’t crash-tested the new E-class yet, but we suspect only the forthcoming Volvo S90 may better it.

And comfort? Well, the ride isn’t as pillowy as we’d hoped – a fact highlighted by a passenger-ride in the super-smooth S-class shortly afterwards. But the E is still a very comfortable car, not least because it’s so refined and easy to drive.

Job done, then. Well, with 13 million E-Classes sold since 1953 there’s no doubt Mercedes knows its customers. We still prefer the sleeker styling and sportier road manners of the Jaguar XF, but we’d understand if you didn’t.

Mercedes has played it safe with the car at the heart of of its range. But by doing so, it has also played to the E-Class’s strengths. Quietly and calmly, it has regained its place as the benchmark luxury saloon.