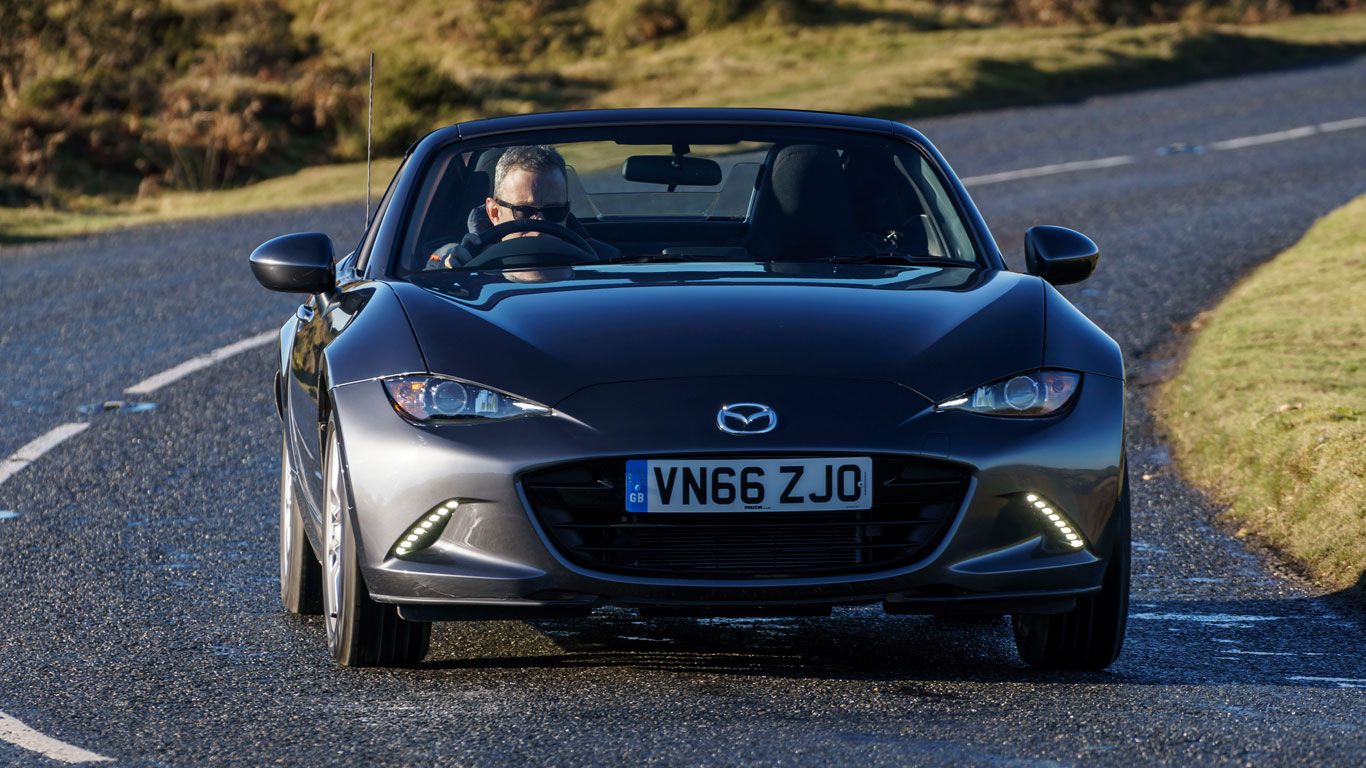 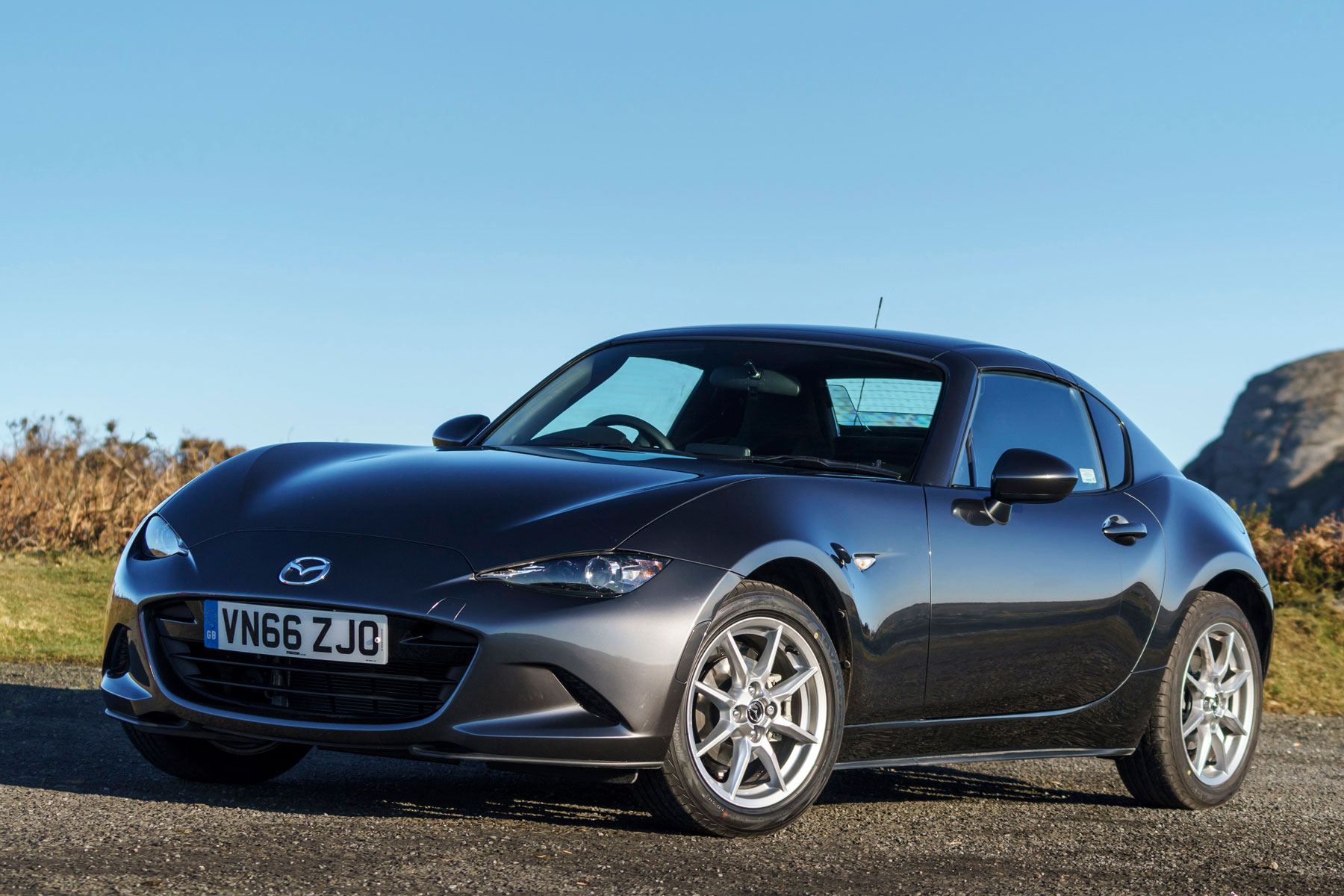 The Mazda MX-5’s brilliance is in little doubt. Ever since the greatest ‘British’ sports car ever to emerge from Japan burst onto the scene in 1990, it has reigned supreme as the affordable sports car of choice.

Much has been written about the roadster. As is the case with the Peugeot 205 GTi, the MX-5 has passed into folklore – almost unchallenged – as the best of the breed.

Some writers, including yours truly, have been all too quick to cement this reputation, some without even getting behind the wheel. Fact is: I’ve never driven an MX-5. Too tall for the Mk1 and Mk2, and never given the opportunity to try the Mk3.

Which means this review of the new Mazda MX-5 RF is offered without a reference point. I’m unable to compare it to past generations. I am, if you like, an MX-5 virgin.

Where better place than the familIar roads of Devon for me to pop my MX-5 cherry? The potholed ribbons of tarmac of Dartmoor and the South Hams have been my playground for the past decade, so even if I’m new to the Mazda, I’m not new to the territory.

The MX-5 Retractable Fastback – you can see why Mazda has shortened it to ‘RF’ – is the more refined, more practical car in the range. The roof, which folds away in 13 seconds of wonderment, carries a 40kg weight penalty compared to the soft-top version, not to mention an additional £2,000 on the price tag.

At least the roof has no impact on the size of the boot, which retains the 127-litre capacity of the soft-top MX-5. It does, however, have an impact on the styling. Looks are subjective, but from certain angles the RF might be the best looking MX-5 ever. Those flying buttresses give it the look of a junior supercar, with a 5mm increase in roof height the only change to the dimensions. 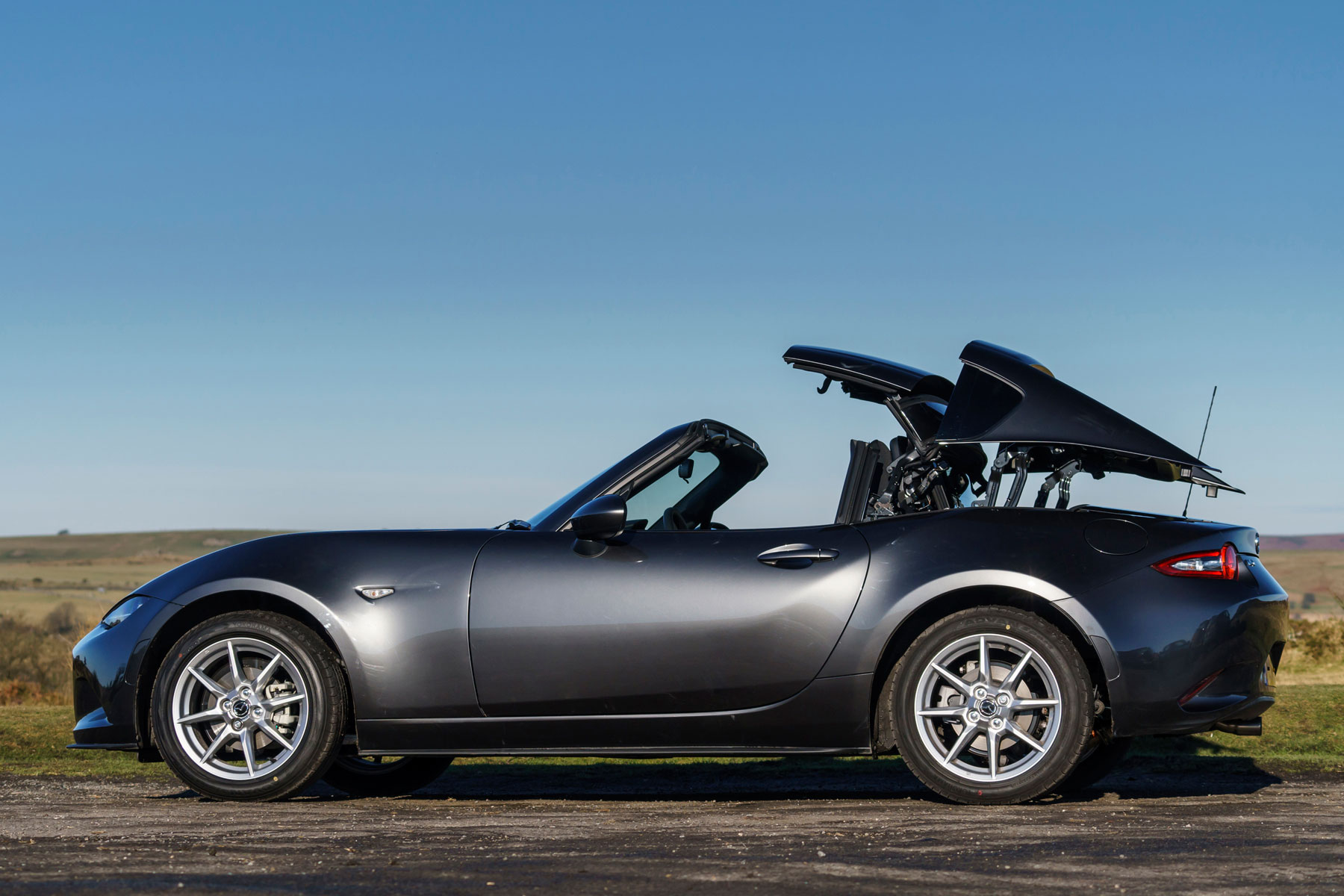 Take it from us, you’ll want to watch the ‘origami’ roof folding display time and time again. The way in which it folds itself into such a narrow space is pure theatre, and will almost certainly earn you kudos points on the high street. It’s a one-touch operation, too.

But enough of the fancy stuff; can the MX-5 RF, as Mazda UK’s MD puts it, “retain all the award-winning driver appeal [the] sports car is famed for”? I selected the entry-level 1.5-litre in SE-L Nav trim to find out.

This was a deliberate ploy. The MX-5 was designed and built with the 1.5-litre engine in mind, so, in theory at least, this should represent the car in its purest form. And in the case of the RF, the SE-L Nav is the entry-level model. The price: £22,195.

Regardless of engine size and spec, Mazda has stiffened the suspension and tweaked the steering specifically for the RF model, so this is no mere ‘roof and no trousers’ exercise. Additional soundproofing is designed to increase the feel of being a coupé, a point emphasised by Mazda’s decision to bring a series of past models along to the launch. The RF’s bloodline lies in the likes of the RX-7, MX-3 and MX-6, if Mazda is to be believed.

The fact that I’m able to provide driving impressions is enough evidence that I was able to crowbar my 6ft 3in frame into position, albeit with my seat pushed as far back as possible. The driving position is superb – even without the ability to adjust the steering wheel for reach – and the cabin is cosy without feeling claustrophobic. So far, so good.

It gets better. Even negotiating the tight, cone-lined roads of Exeter Airport is an event. You’re immediately struck by the lightning quick steering and feel through the wheel. It bodes well for a sprint across Dartmoor.

The roof is down, obviously, and at lowish speeds you feel cosseted and cocooned behind the wheel. Once on the motorway, this serenity is replaced by something altogether more unpleasant, as the wind noise begins to dominate proceedings.

An unfair criticism in an open sports car, perhaps, but the RF is designed to be the more civilised member of the MX-5 group. Besides, even with the roof in place, there’s a noticeable amount of wind noise coming from over your shoulder. No deal breaker, but enough to warrant a mention. 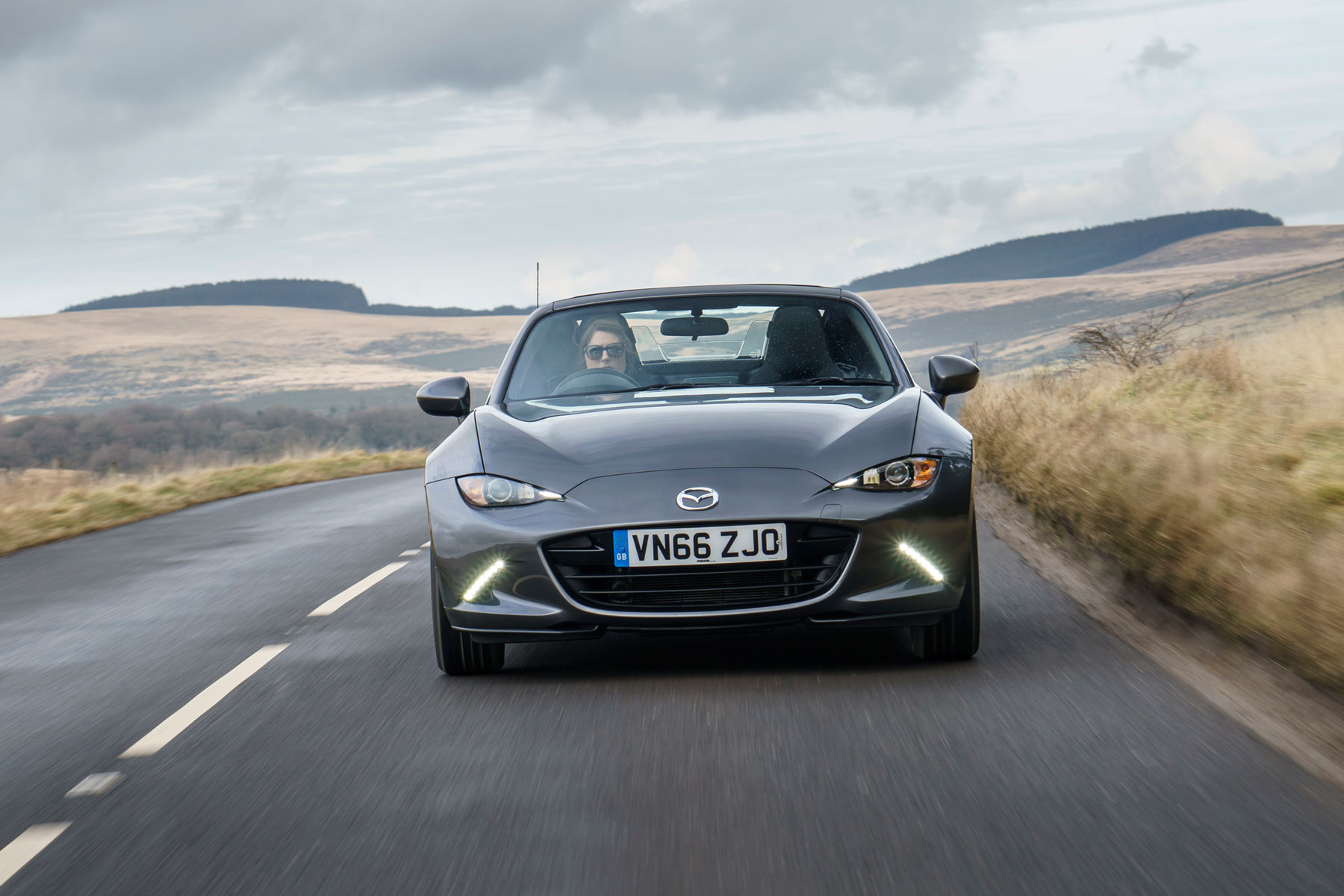 Such nitpicking is soon forgotten once you peel off the motorway and head for the hills. The MX-5 RF could have been made for the roads of Dartmoor: often damp, occasionally pockmarked, sometimes with the added bonus of fluffy wildlife.

The road from Ide to Moretonhampstead is a delight. A tight, technical section, through trees, over narrow bridges, and free of the blanket 40mph limit that covers the moors. The MX-5 feels at home, its lightness, poise and precision coming to the fore. I break for lunch wondering why anyone would need the 2.0-litre engine.

Yes, the 131hp 1.5-litre engine runs out of puff all too quickly when the roads start to climb, but when the gearbox is this good, who cares? Change down to third, occasionally second, and listen as the engine and exhaust deliver a rorty soundtrack. I’m getting a hint of why 500,000 people either own or have owned a Mazda MX-5 in the UK.

It feels like the real deal, right down to the 16-inch alloy wheels – standard fitment on the 1.5 model – which seem to find every small imperfection on the road, then communicate it back through the wheel and pedals. Again, there’s a danger that the 160hp 2.0-litre model, with its 17-inch rims, might lose a little of the 1.5’s innocence. I found out the following day…

“Not sure about the looks,” said the ferryman as we crossed the River Dart to Kingswear. As a Mk2 MX-5 owner he had every right to an opinion. Looks are subjective, of course, but I maintain that this is one of the best looking junior sports cars of all time. That’s if the reflections in the shop windows of Salcombe are anything to go by.

Once off the ferry at Kingswear, the A379 delivers a series of bends and straights, climbing as it meanders its way to Hillhead. Here, the 2.0-litre engine shows the 1.5 a clean pair of heels, delivering an experience that is more rounded, more grown-up. It turns out chasing a brand new Polo GTI off a ferry can be a huge amount of fun.

In Sport Nav guise – as tested – the 2.0 version is able to call upon a limited-slip differential, Bilstein sport suspension and a strut brace, which in theory should deliver a more focused driving experience. I say ‘in theory’, because the rest of the drive was a combination of congested urban roads and motorways.

There were glimpses of magic, most notably the steering and gearbox, but circumstances beyond its control meant that the 2.0 was unable to match the utter joy of chucking a 1.5 along the roads of Dartmoor.

Right now, 24 hours on from leaving the MX-5 at Exeter Airport, I’m left feeling a tad confused. Truth be told, as first dates go, I wasn’t blown away. If this means I should hand over my petrolhead badge, shutting the door on the way out, so be it. But a car like this should tug at the heartstrings, and it simply hasn’t managed it. Not in the same way as the Toyota GT86.

I have a feeling – and it’s no more than a hunch – that I might prefer the soft-top version. A basic Mazda MX-5, with a 1.5-litre engine and SE trim for £18,495, is something that holds genuine appeal. At that price, I may even start to question my devotion for the Ford Fiesta ST.

There were one or two niggles. Some are minor, like the horribly cheap feeling sunvisors and the fact that one of the speakers on the Sport Nav’s premium Bose sound system had a tendency to stop working. 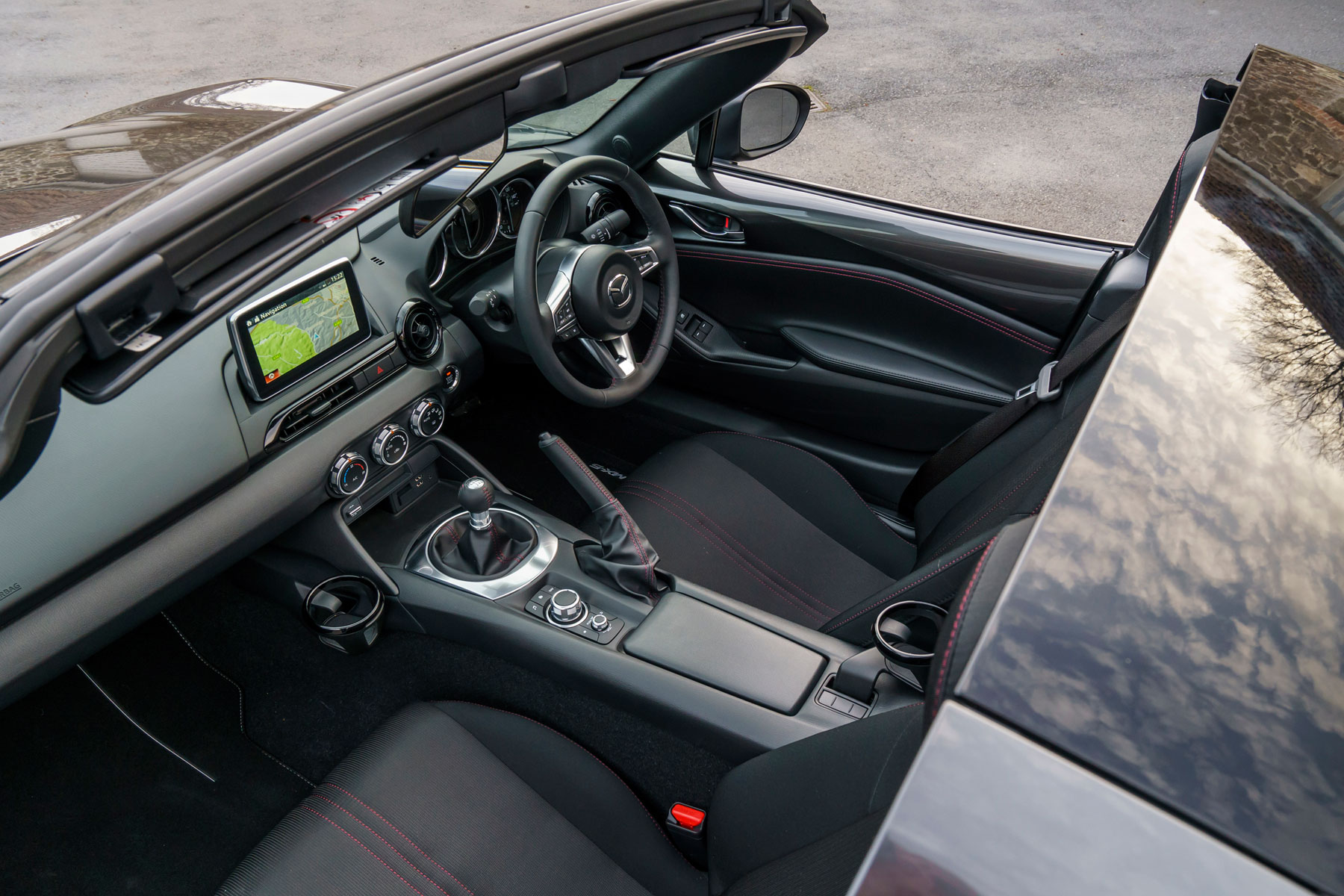 The lack of storage options in the cabin is also an issue, while the location of the cup holders – perched behind the driver’s left elbow – is a tad awkward. On the plus side, one cupholder can be moved to a slot to the right of the passenger’s footwell. Clever.

The wind noise – roof up or down – is a little harder to forgive. The sound-absorbing headliner might do a reasonable job, but the wind whistling behind your shoulder kills the feeling of being cocooned in a coupé.

I realise my admiration for the basic and ‘slowest’ MX-5 puts me in the minority. Mazda says that most UK buyers will opt for the 2.0-litre model, with the majority lavishing it with Sport Nav trinkets. Heck, 15% of MX-5 owners will order an automatic version…

Wait, what? When the six-speed manual is this good, why on earth would you order a slush transmission?

Whatever, I’m grateful for my brief encounter with the Mazda MX-5, especially on the roads I know and love. Perhaps I should move from a first date to a dirty weekend away. Given the state of the Dartmoor roads, it’s likely to be particularly filthy.