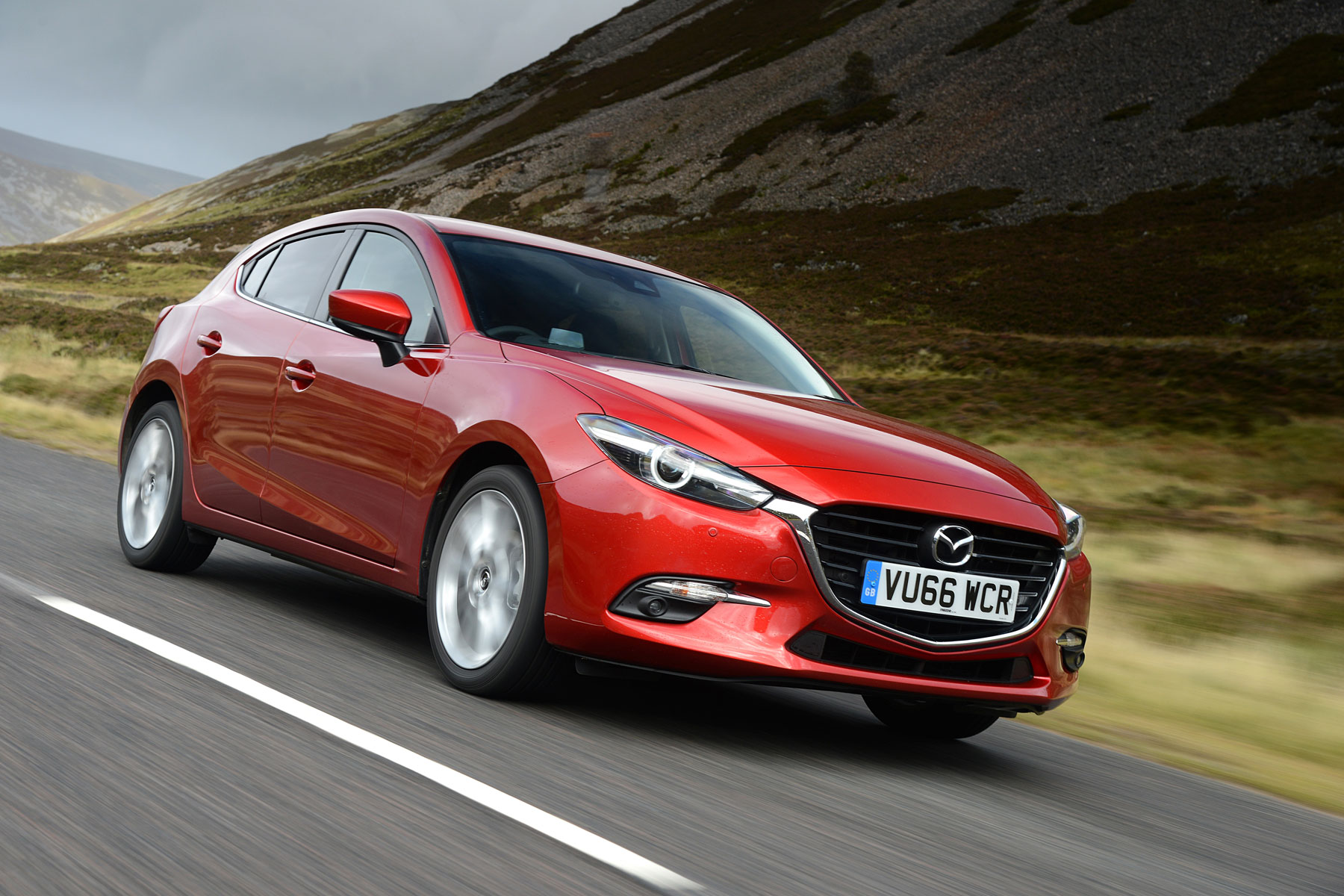 If you’re looking for a new Ford-Focus-sized car, there are a lot of contenders you’d probably consider before you get to the Mazda 3. The Japanese manufacturer’s mid-size hatchback has been around since 2004, yet is still under the radar for many new car buyers. Those in the know have always been rewarded with a car that drives well, has a solid interior and offers commendable reliability. We’ve driven the freshly-facelifted 2017 Mazda 3 to find out whether you should buy one over a more popular rival.

In the 2.0-litre Sport Nav guise we’re testing here, the Mazda 3 has a list price of £20,645. Most buyers will be more interested in the finance deals on offer, however – and the same spec is currently available through Mazda on a 0% PCP deal for £279 a month over three years, following a deposit of £2,779.62 (and an extra £750 from the manufacturer).

There’s no shortage of rivals: the popular (but ageing) Ford Focus, the much-improved Vauxhall Astra, and of course, a plethora of hatches from VW Group, including the SEAT Leon, Skoda Octavia and the Volkswagen Golf. The new Renault Megane is also worth a look, as is the Peugeot 308. 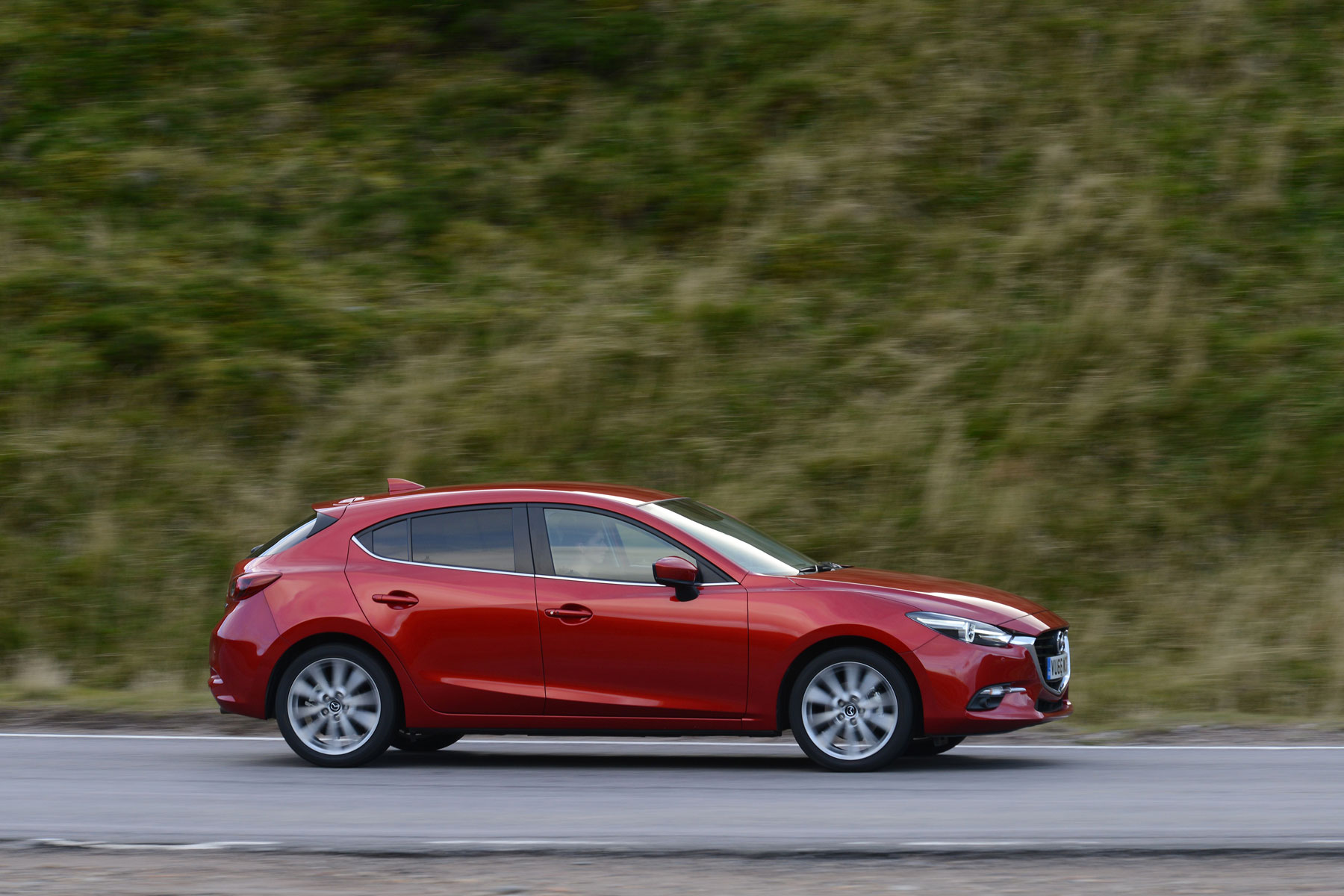 The engine we’re testing here is likely to be the most popular – a 2.0-litre petrol producing 120hp – while the same engine is also available in sportier 163hp guise. There’s a lesser 100hp 1.5-litre (but this is underpowered and best avoided), while company car drivers will favour the 1.5- and 2.2-litre turbodiesels.

The Mazda 3 isn’t as fast as you might expect from a 2.0-litre petrol, as Mazda snubs the turbocharged trend in favour of low weight. It hits 62mph in 8.9 seconds, with torque available across a wide rev range – a welcome change from the usual short, punchy acceleration turbocharged engines offer. 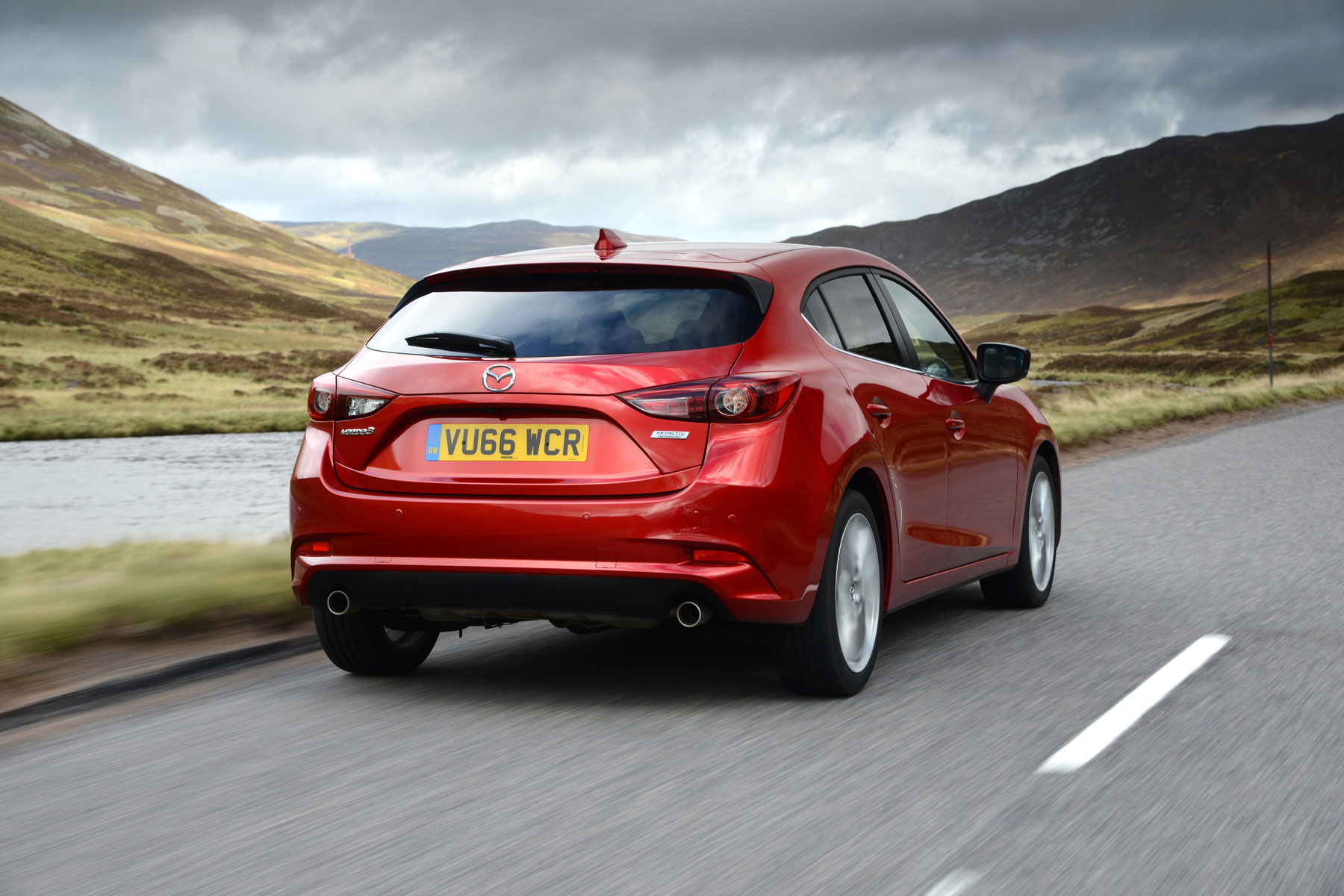 Traditionally, enthusiastic company car drivers have opted for a Ford Focus or (if they’re lucky), a BMW 1 Series. But the Mazda 3 is a brilliant drive, taking traits such as its snickety gear change and direct steering from the MX-5 sports car. Body-roll is well controlled, while the suspension soaks up bumps well – even on the 18-inch wheels of our test car.

Officially the 2.0-litre Mazda 3 hatchback will return 55.4mpg – and in a refreshing change from the norm, that’s actually fairly achievable. The likeable thing about naturally-aspirated engines is they’re fairly consistent in fuel economy tests. On a busy M25 run we averaged 54.6mpg, while day-to-day driving saw this drop to high 40s. We can see why Mazda is sticking with larger, naturally-aspirated engines. 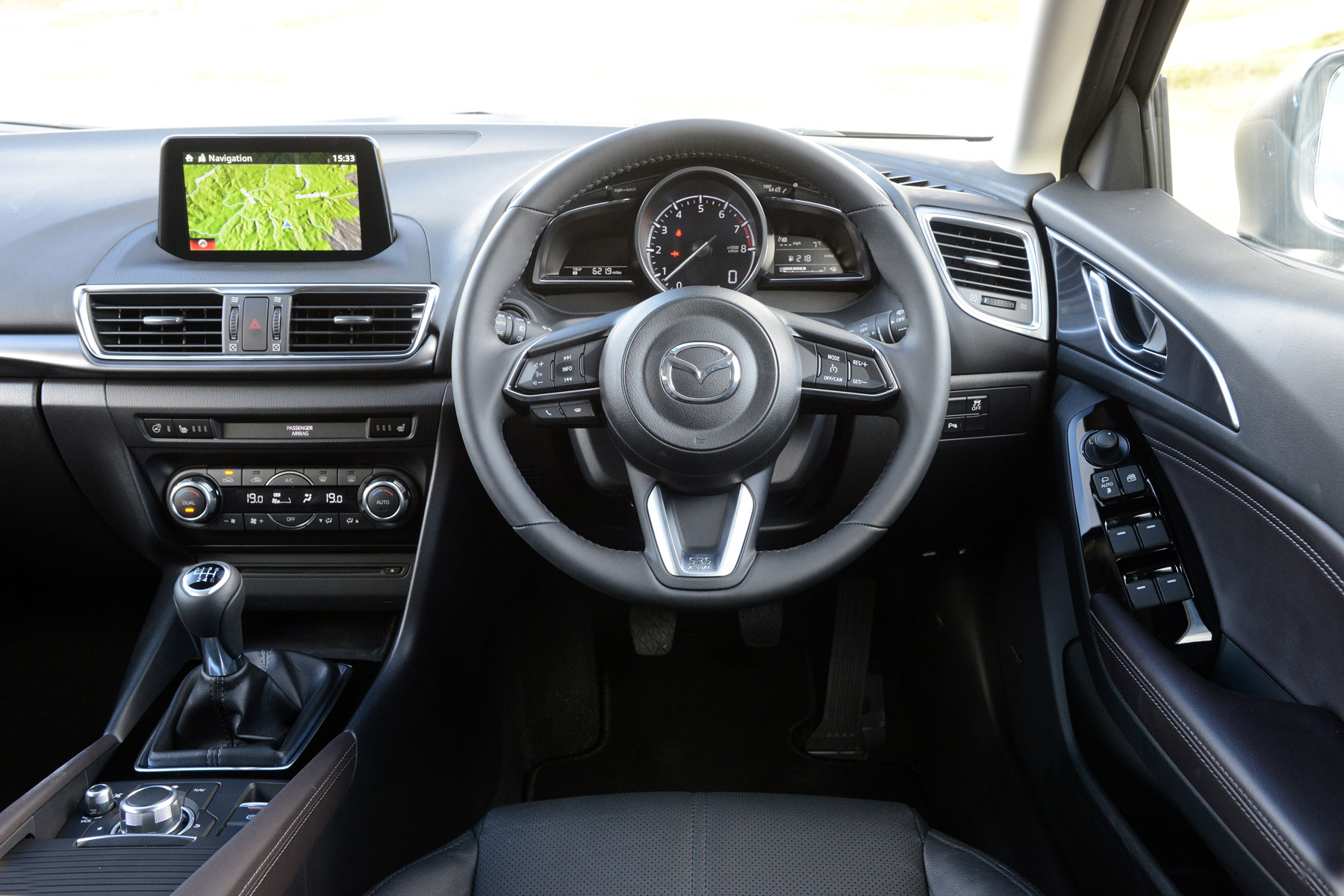 The interior, frankly, puts the Ford Focus to shame. It’s almost premium in its approach, with a high level perceived quality and everything where you’d expect it. Fleet drivers, if you’re offered one of these to spend several hours a day in – grab it!

For drivers, yes. There’s plenty of adjustment in the front seats and the steering wheel, meaning it’s easy to find a comfortable driving position.

It’s in the rear where things start to go wrong. Rear-seat passengers won’t be particularly happy after a long journey – the sloping roofline eats into headroom, while the rising windowline won’t be popular with children who suffer from travel sickness. 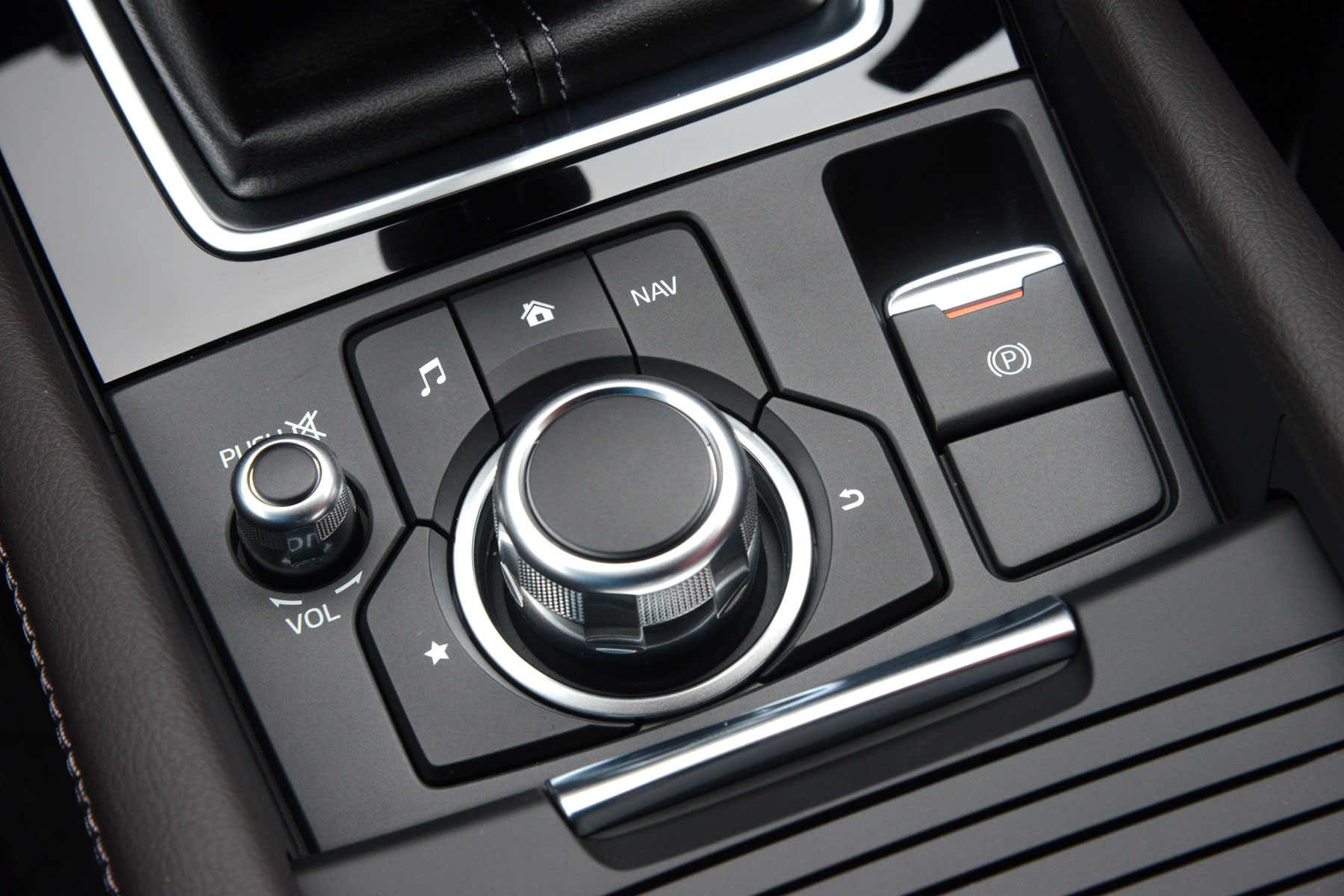 Things don’t get much better here, either. The boot is rather shallow, offering 364-litres of space in total. There is a Fastback saloon version available, which offers a bit more luggage room (419 litres in total), but you’d be much better looking at a crossover like the Nissan Qashqai if practicality is important.

This Sport Nav model isn’t short of kit – a seven-inch infotainment system takes pride of place in the centre of the dash with an easy-to-use sat nav, DAB radio and excellent Bose speakers as standard. 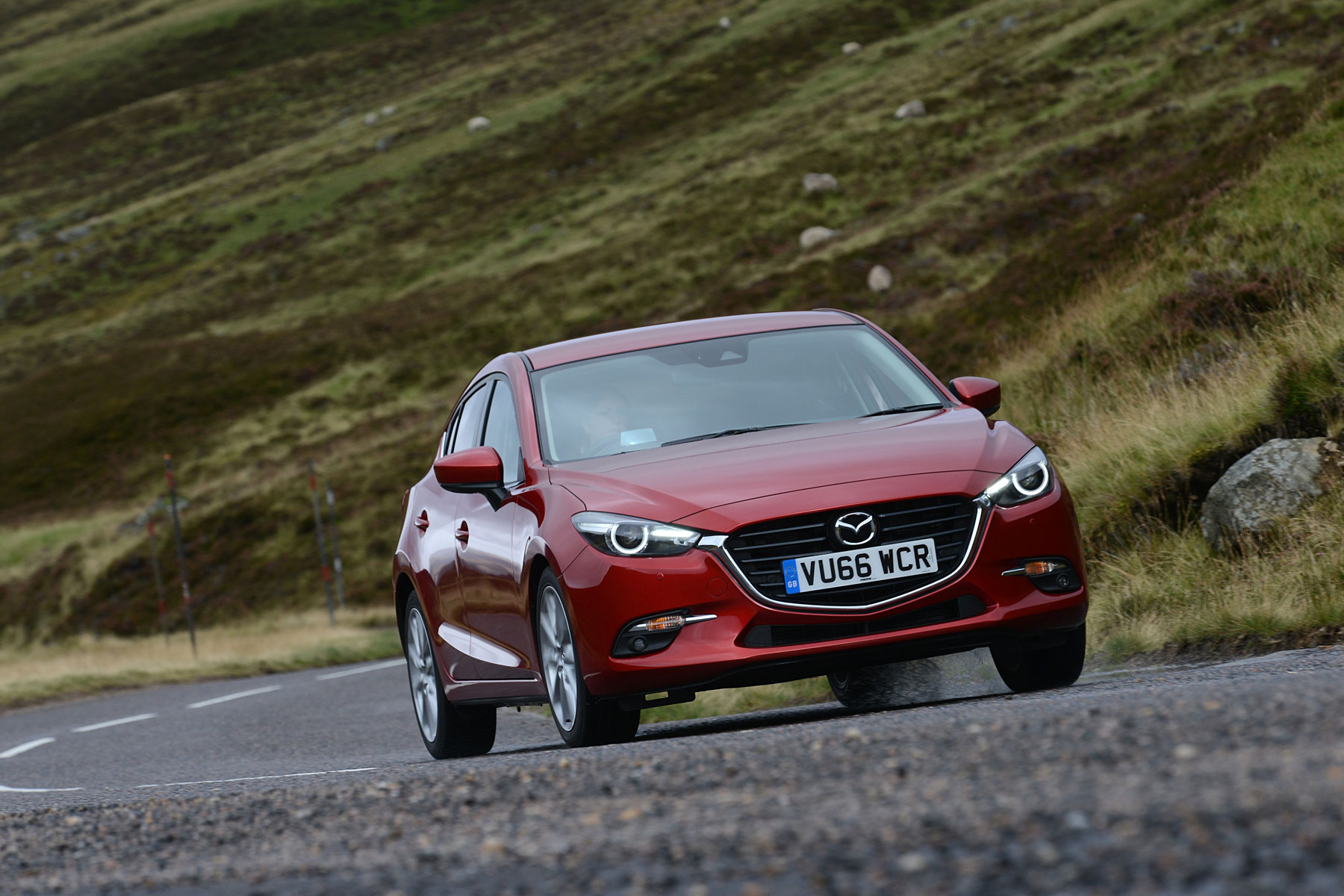 When Euro NCAP crash tested the Mazda 3 in 2013, it was awarded five stars for safety. The safety pack, an £800 option on this model, adds adaptive LED headlights, blind-spot monitors and an autonomous city braking – amongst other handy features.

The turbodiesel is regarded highly, but we’re big fans of the 2.0-litre petrol used in our test car, especially if you don’t spend a lot of time traipsing the motorways (not that it can’t do that efficiently – as we proved).

Trim-wise, we’d find it hard to resist the Sport Nav on PCP for £279 a month. 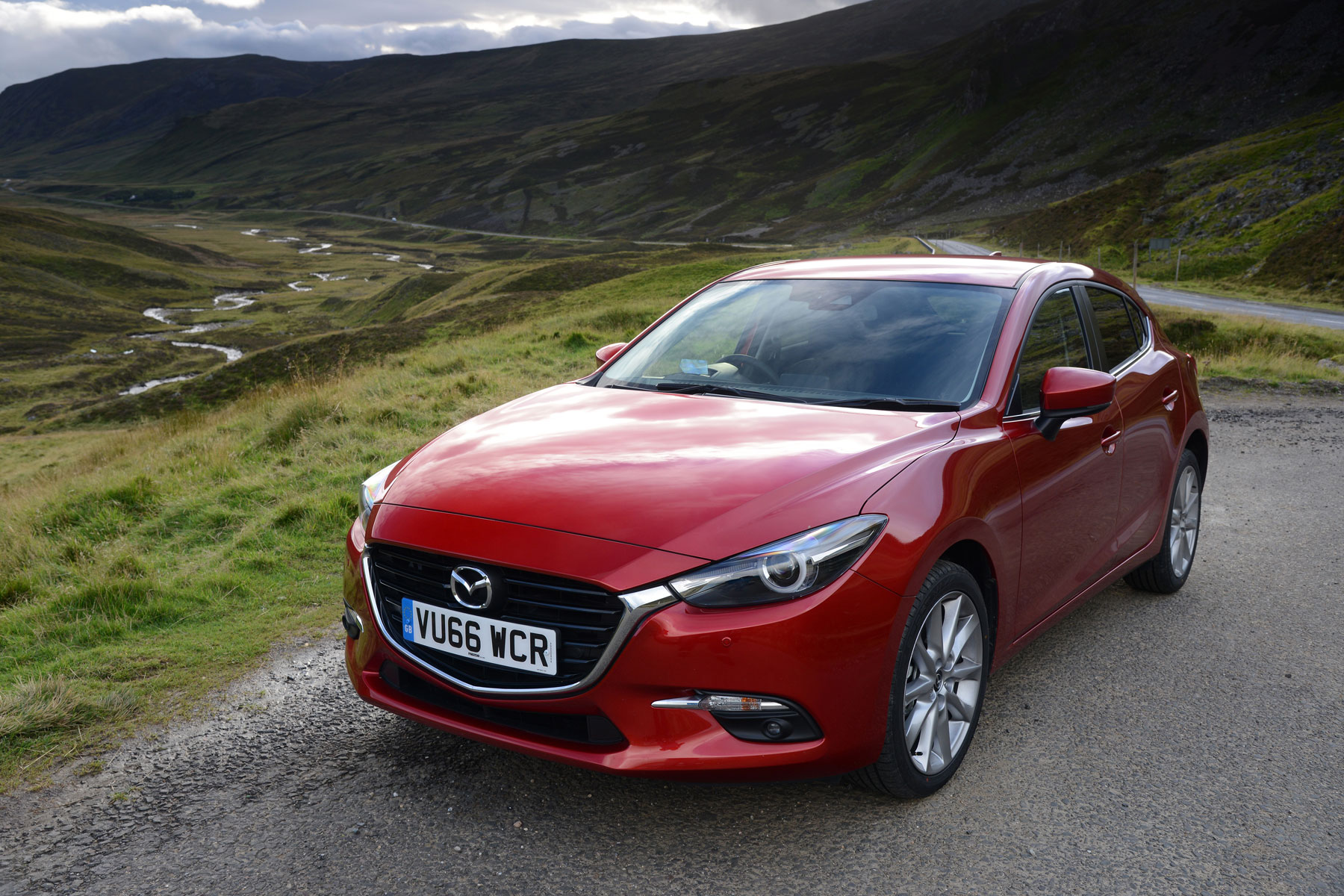 The latest Mazda 3 has just been given a mid-life facelift, but it’s remained largely unchanged since 2013. Early examples of the latest model are now coming to the end of their three-year leases, meaning they’re hitting dealerships and car supermarkets from around £10,500 for an entry-level 1.5-litre SE.

Alternatively, older examples can be picked up from as little as £500 for a 2004 model. Watch out for rust, though – Mazdas of this period were partial to a little light corrosion.

The Mazda 3’s abundance of rivals means it’s all-too-often overlooked. The only slightly disappointing area is practicality, but in every other aspect it’s pretty much class-leading. If you want a hatchback that’s great to drive, good value for money and has an upmarket cabin, break from the herd and buy one of these. 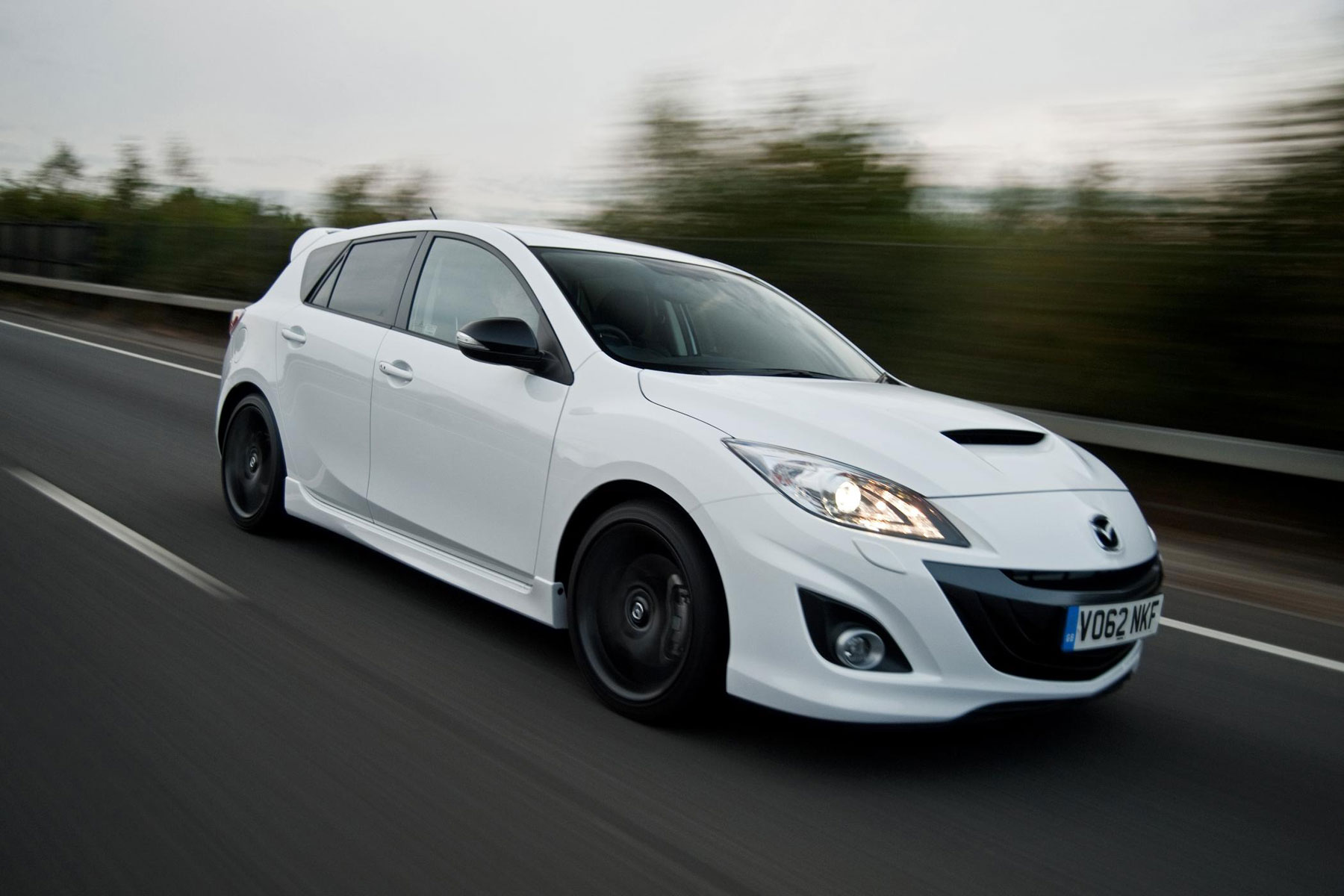 The previous Mazda 3 was available in hot MPS guise (short for Mazda Performance Series). It produced 260hp, making it one of the most powerful hot hatches on the market at the time – hitting 62mph in 6.1 seconds. Unfortunately it didn’t sell particularly well, meaning there’s no hot derivative of the latest model. A shame, as the chassis would cope with it very well.