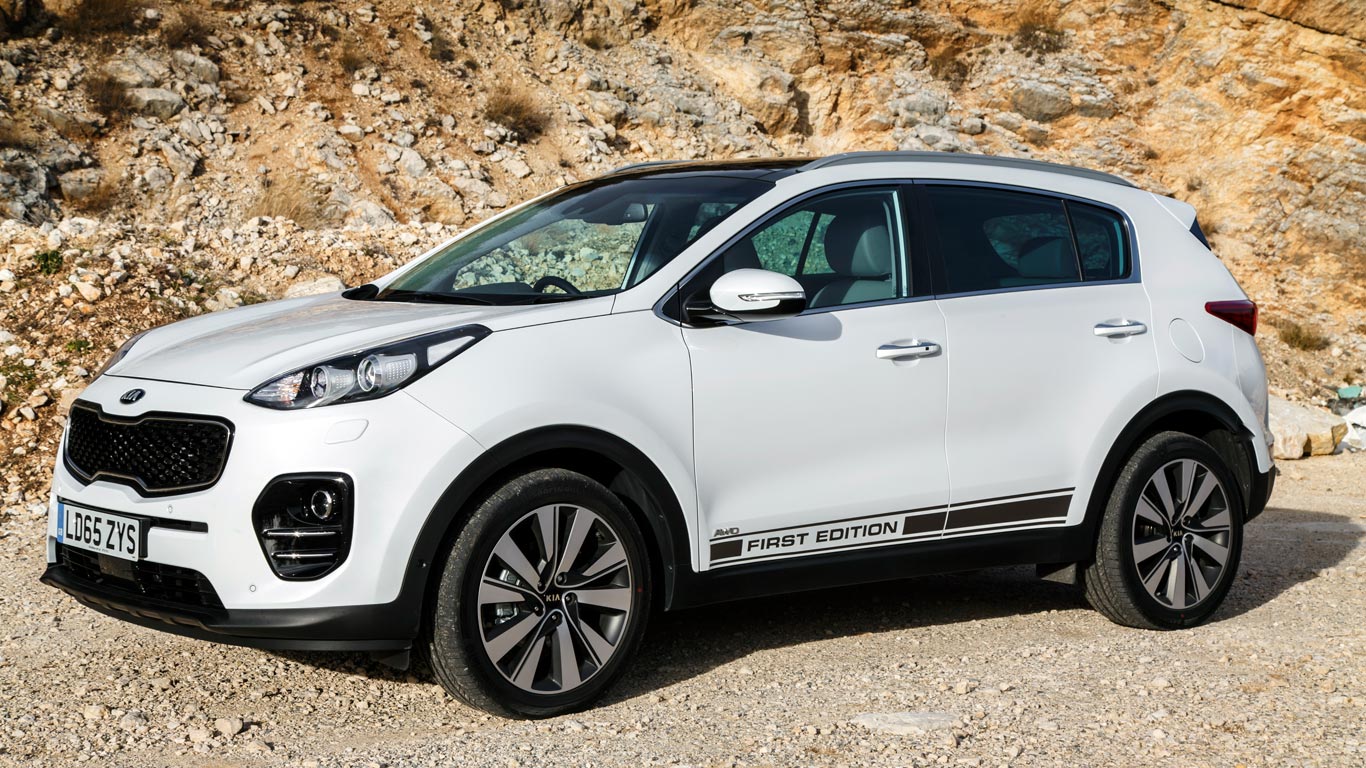 How do you replace the best-selling car in your range, a car so popular that in its final year it sold more than ever? That’s what Kia has to face up to with its Sportage crossover. The car that’s being superseded was a winner, with good looks, solid build quality and strong value.

The 2016 model carries over many of these attributes, except the adoption of the snub nose from the cheapest Kias has done it no favours. That’s in complete contrast to the rear profile, which is stand-out classy.  Yet we’ll almost certainly grow accustomed to the new look and let the real attributes of the latest Sportage be the arbiter.

This is one of the most hotly contested areas of the new car market. The best seller by a big margin is Nissan’s Qashqai, with every other manufacturer scrabbling for a slice of the action.

The new Hyundai Tucson is a direct alternative to the Sportage – they share the same parent company and beneath the skin these two cars are all but identical. Then there is a long list of alternatives, including the Audi Q3, BMW X1, Ford Kuga, Honda CR-V, Mazda CX-5, Renault Kadjar, Skoda Yeti, Toyota RAV4 and VW Tiguan.

The range is largely familiar from the previous model, although each engine has been improved and refined to give better economy and lower CO2. The big seller is the 1.7-litre diesel, which comes with a six-speed manual transmission and front-wheel drive. The 2.0-litre diesel has four-wheel drive, 134hp or 182hp, with the option of automatic transmission.

The 1.6-litre petrol engine continues as the budget offering that few actually buy, but Kia is pinning hopes on a new 1.6-litre petrol turbo. That has four-wheel drive, a punchy 174hp and can be specified with an advanced double-clutch automatic transmission.

This latest Sportage is rather nice to drive, notably better than the model it replaces and as good as its best rivals. There’s a new steering system that feels sharp and precise, yet never heavy. The driving position has plenty of adjustment so it’s easy to find a satisfactory position. Top models get electric seat adjustment, and most get electric controls for the lumbar support, although inexcusably not on the front passenger seat.

The Kia Sportage ‘First Edition’ comes as a highly equipped introductory model, with the 182hp 2.0-litre diesel and six-speed automatic transmission. It’s a sweet combination, quiet and refined with punchy acceleration when you need it. Yet the 1.7 diesel model, with just 114hp, also provides a pleasing drive, never feeling short of power, albeit a bit gruff-sounding when you try to get the most from it.

The new 1.6 turbo petrol provides the most engaging drive of all. There’s ample power at all times with a quick, responsive pick up in acceleration when you demand it. The manual gearchange is very smooth. Take with a pinch of salt the ‘GT-Line’ branding, because the sporting pretensions are only about the body and interior trim. This is a crossover, after all, not a sports car.

Kia has never been close to the best in class when it comes to economy and CO2 in the Sportage. The 2.0-litre diesel engine was behind the technical curve, and when coupled to the six-speed automatic transmission was genuinely disappointing. Yet the changes Kia has brought about have made significant improvements.

The most popular model is the 1.7 diesel, where we saw mid-forties in our test-drive. Kia claims 61.4mpg and 119g/km CO2. The new 1.6 petrol turbo is naturally heavier on fuel, 37.2mpg and 177g/km CO2, although the automatic version is actually marginally better.

Kia is buoyant about the resale values of the new Sportage, which independent guides say will be better than the Nissan Qashqai. No doubt the seven-year warranty helps here. Running costs should be low, as you can buy into three years servicing for just £299.

Practicality is the reason so many people buy crossovers and SUVs. Both the space and the visibility afforded by the higher driving position help the appeal. But enthusiasm should be tempered a little, because the luggage area is often no better than a hatchback, and almost certainly less than that you get in an estate car.

The Sportage is good case in point. The boot area is only average, partly because there’s still a spare wheel under the floor (this time a space-saver) rather than a puncture repair kit favoured by others.

This new Sportage is a little longer than before, and that helps push up the rear legroom, so there’s plenty of space for adults front and rear.  With the large panoramic sunroof fitted to the higher specification cars, the interior feels light and airy, and certainly a step up in quality. The dashboard, particularly, has a classy look in the First Edition variant, helped by the lighter colouring to the lower panels.

Every model but the cheapest now gets satellite navigation, a reversing camera and dual-zone climate control as standard. Seat comfort is good, with improved padding. However, the lack of lumbar support and seat-height adjustment for the front passenger seat is a mistake.

The new Sportage already has a five-star safety rating in the Euro NCAP tests. There are clever electronics that stop the car from rolling backwards on a hill start, or deploy the side airbags should the Sportage start to roll over. Pick the top KX4-4 or First Edition and there’s a radar system to brake the car automatically in an emergency. You also get help with parking in tight spaces.

Most drivers will go for the 1.7 diesel, which makes the most economic sense in view of its economy, CO2 and price. But if it’s four-wheel drive you need, you’ll have to pay more and contend with inferior economy. Yet the 2.0 CRDi diesel is a good choice and with the improved specification of the Sportage, you get all the important features in the ‘KX-2’ grade, which is £24,300. The equivalent 1.7 CRDi is £22,050.

The new £24,350 1.6 T-GDi GT-Line petrol turbo model could appeal if you have been put off by recent bad press for diesels, but you’ll suffer at refuelling time and the resale value is likely be lower than the equivalent diesel.

Yes, you should. The new Sportage is a compelling package, the improved driving experience and new levels of comfort and refinement make it something of a no-brainer. Of course, if you want a dynamic drive you’ll need to look elsewhere, but hey, this is a crossover.

Value for money looks good, especially as there’s little need to spend more than £25,000 to get all you need. And the sheer simplicity of operating the controls, the navigation and the media centre knocks into touch the tiresome reliance on touchscreen menus of many rivals.

SUVs (including 4x4s and crossovers) were the best-selling class of car in Europe for the first time ever in 2015. The Nissan Qashqai took the top spot in the compact sector – with the Volkswagen Tiguan second and the old Kia Sportage third.