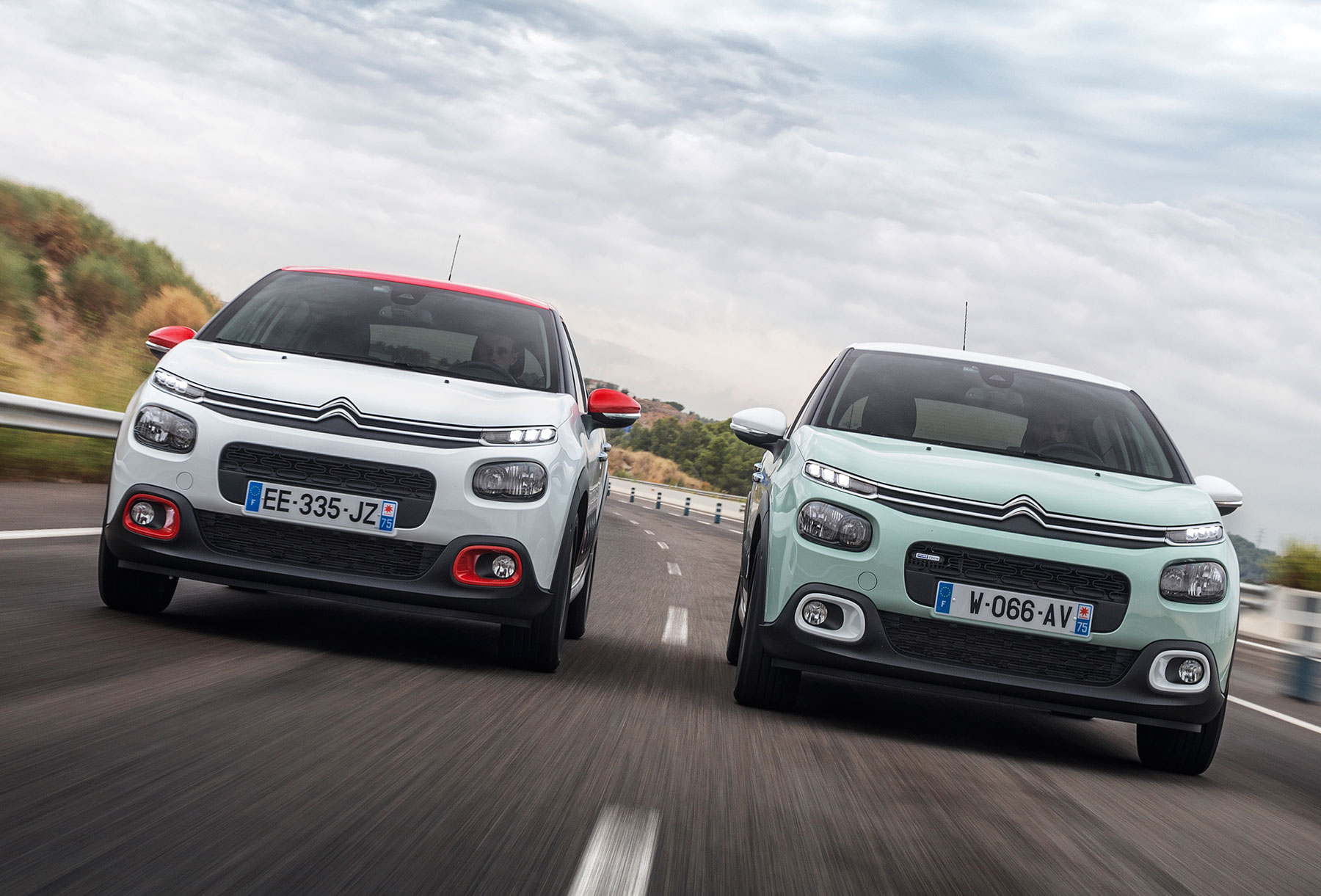 This is the Citroen C3, reinvented. Gone is the dull and lacklustre current C3, replaced by something fresh and funky, which is part-supermini, part-crossover. A Citroen C3 SuperCross, if you like.

The French firm has a rich history of pushing boundaries, and while a set of Airbumps, chunky SUV-esque styling, a camera and a host of personalisation options might not elevate the C3 to the greatness bestowed upon the Traction Avant, 2CV and DS, it is – for now at least – in a league of its own.

Come next year, the Citroen C3 might be the car to be seen in, darling. The vanilla supermini is like so last year, honey.

Similarities will be drawn with the Citroen C4 Cactus – you can thank the Airbumps for that – but there’s more to the C3 than a set of air-filled body panels.

It’s smaller, for a start, and if you don’t like the Airbumps – and we know a number of people who don’t – they’re not available on the entry-level Touch trim and only an option on the mid-spec Feel.

It looks a little naked without them, removing part of the C3’s unique character. Not a great idea if you’re looking to stand out. No, what you need are the Airbumps and the wheelarch extensions, the latter standard on Feel and Flair models.

About that styling: love it or hate it? 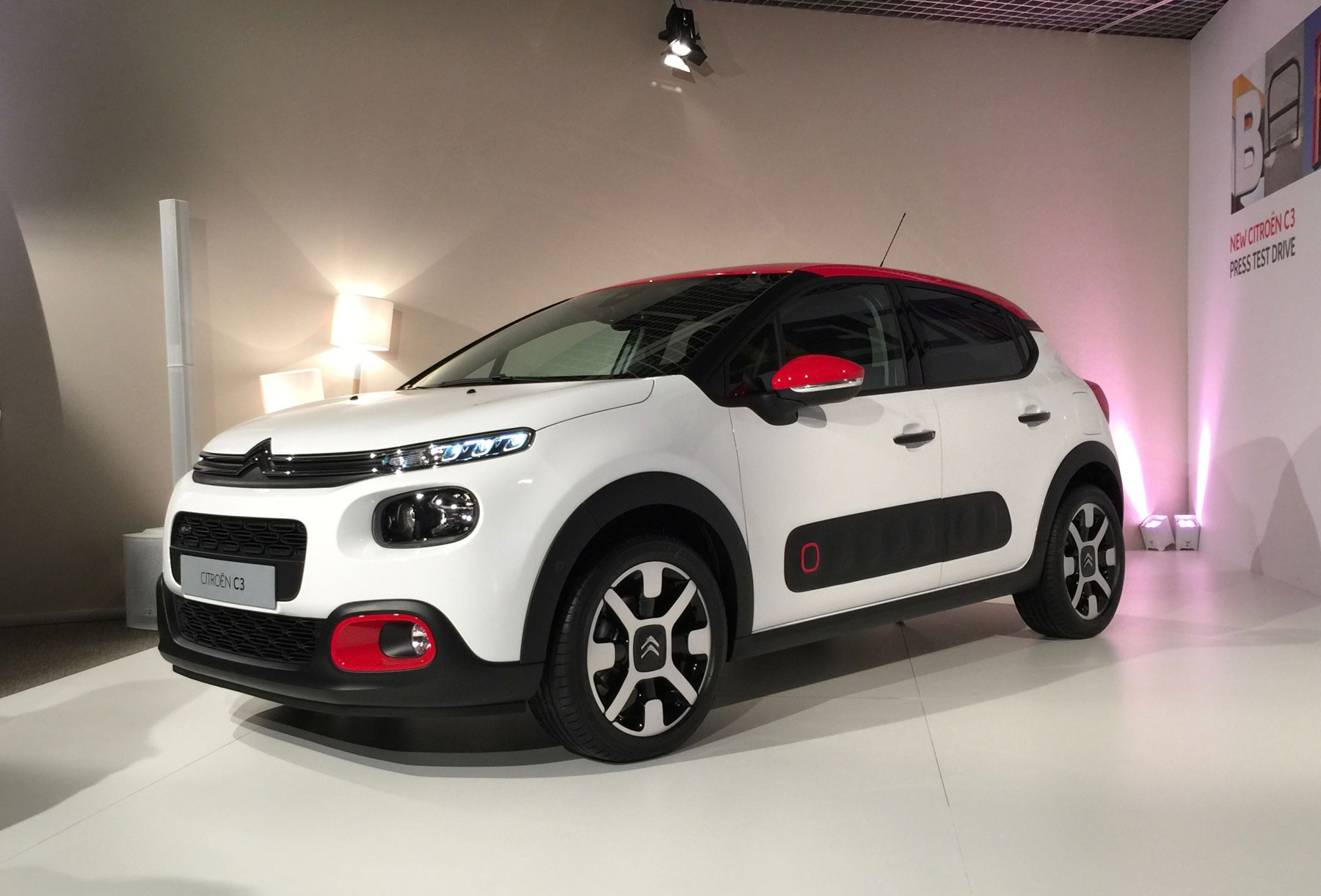 Come on, how could you not love the look of the new Citroen C3? This could be the best looking small or medium Citroen since Claudia Schiffer stripped off to help sell the Xsara Coupe. Unless we’re allowed to class the DS3 as a Citroen? Hashtag controversial.

The styling is just the right side of in-yer-face aggression, while the Airbumps are narrower than those found on the C4 Cactus and seem to suit the C3’s overall proportions.

Much will depend on how you spec your C3. With nine different body colours and three roof options, Citroen is offering a total of 36 ways to create your look, so there’s no excuse if you end up with the same C3 as the fella across the road.

A black roof is fitted as standard on Feel and Flair models, with white or red versions available as a free upgrade. In our view, you’d be mad not to experiment with a duotone look. Again, it’s part of the C3’s character.

If you like the interior in the C4 Cactus, you’ll love the C3’s minimalist cabin. But if you weren’t a fan of the lounge-style vibe, there’s every reason to take a second glance. It’s a familiar look, but Citroen has ironed out many of the niggles associated with the Cactus.

The rear windows open: they don’t simply pop out. The rear seat splits 60:40. There’s more than one cupholder (and each one is useful). And the infotainment screen is a touch more intuitive, although it still lags behind some of the best systems on the market.

It all adds up to one of the best cabins in the sector and proves that you don’t need to go premium in order for something to feel good.

Citroen has worked hard to ensure the touchpoints feel special, while neat touches, such as the details on the air vents and the reverse Airbumps make it easier to forgive the low-rent plastics found elsewhere in the cabin.

The wide seats are comfortable and far more supportive than they look, while the top-spec Flair trim adds a leather steering wheel and leather gearknob to the mix.

The exterior is customisable, what about the interior? 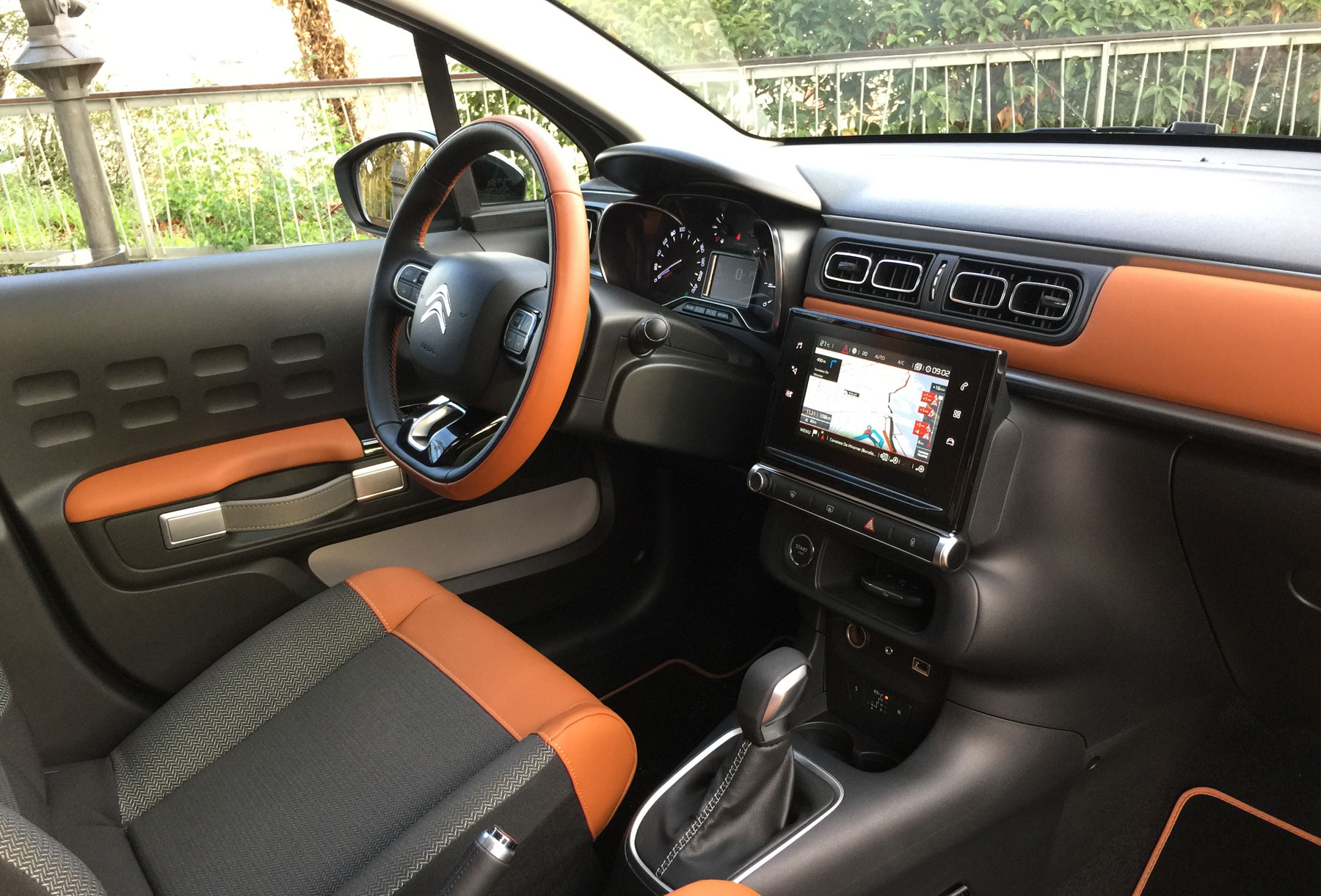 Far better to opt for the manly Urban Red or coffee-shop-friendly Hype Colorado. In both cases, the dashboard, door cards and seats are enhanced, while Hype Colorado adds a two-tone steering wheel. The names are daft, but the results are good.

Sadly, Citroen UK isn’t planning to offer Metropolitan Grey Ambiance, a blend of grey fabric and yellow stitching, which is far more appealing than it sounds. It’s just a hunch, but we think it could be a big seller in the UK.

Now you’re sitting comfortably, we’ll begin. Aware that, to many buyers, in-car tech is about as important as how the car drives, Citroen has loaded the C3 with useful kit, much of which is standard.

Even the entry-level C3 Touch gets hill-start assist, a lane-departure warning system, DAB digital radio, Bluetooth, coffee-break alert and a speed recognition system. But the real value lies in the mid-spec Feel trim.

Wait, isn’t the C3 supposed to feature a camera? 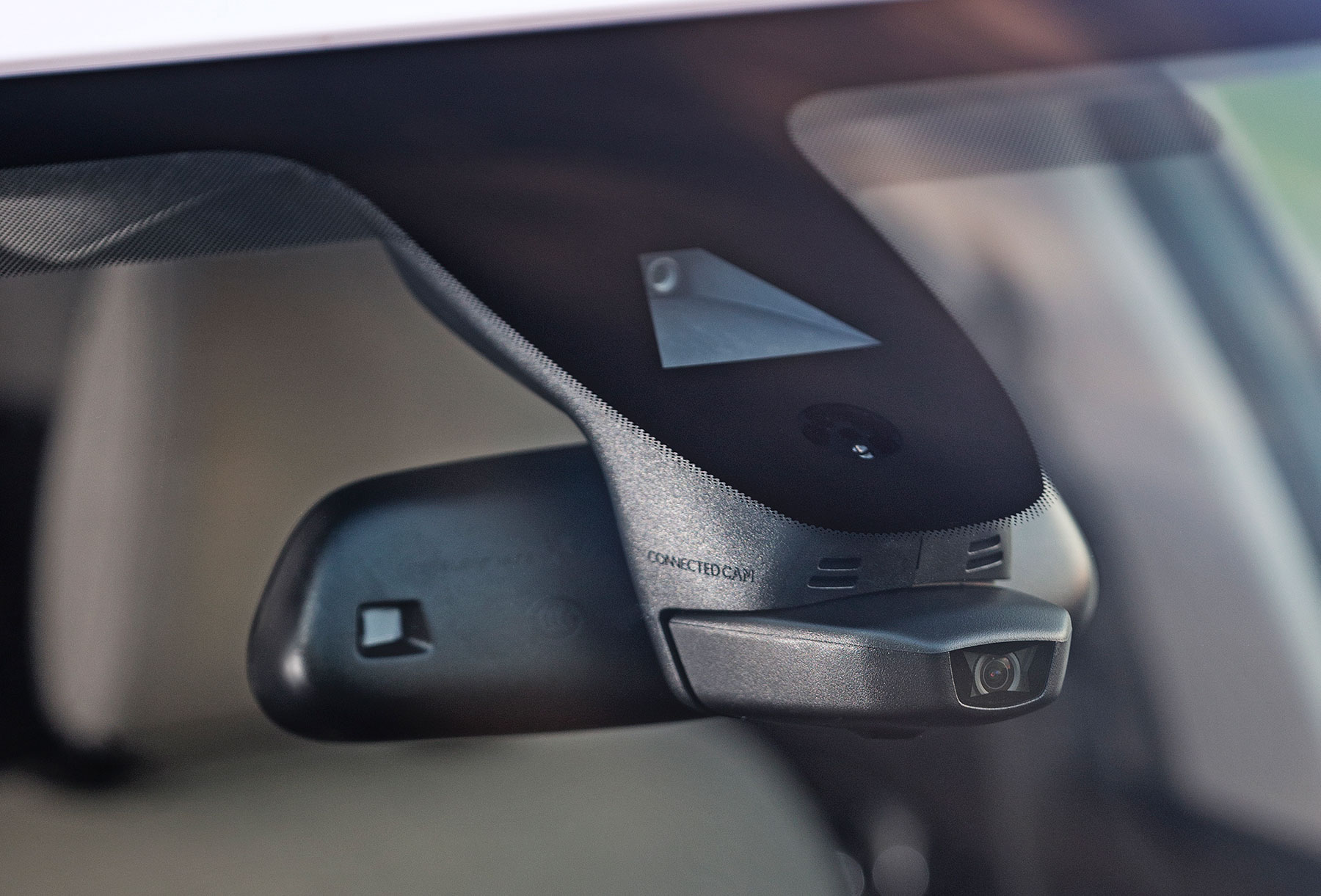 That’ll be the ConnectedCAM: what Citroen is calling a “world first”. Standard on the C3 Flair and optional on the Feel, ConnectedCAM is an integrated full HD camera with a wide 120º view of the road ahead.

Simply press a button behind the rear-view mirror and the camera records what you see, either as a photo or a single minute of video footage. Used in conjunction with a free app, ConnectedCAM will share your memories on social media.

You need to remember to deselect the ‘auto share’ box, something we discovered having taken half a dozen terrible shots of the airport car park and approach roads, which were shared on Twitter along with the tweet “Enjoying my drive”.

Regardless of our lack of social media skills, the ConnectedCAM is a neat touch – perfect for boring your friends with memories of your favourite road trips or random things you see on the side of the road. You know, like killer clowns, gorillas or genuinely intelligent candidates from the current series of The Apprentice.

ConnectedCAM also works like a dashcam in the event of an accident, automatically saving video footage from 30 seconds before and 60 seconds afterwards. We suspect other carmakers will follow suit with their own versions of Citroen’s system.

It’s a sign of the times that we’ve managed to get this far without mentioning the C3’s dynamics. Two reasons for this. Firstly, the majority of C3 buyers will be more interested in style and technology than ride and handling. Secondly, it’s not the sharpest supermini in the sector.

If you prefer driving to taking photos on the move, the Ford Fiesta remains the supermini of choice, but that’s not to say the Citroen C3 is without appeal. In fact, the C3 feels refreshingly French.

Which means you can expect a barrel-load of body roll when cornering hard, along with a tendency for the C3 to feel slightly unsettled over uneven road surfaces. On the flipside, the ride quality is soft and cosseting, putting us in mind of large Citroens of old.

The five-speed manual gearbox also has a whiff of Gitanes and an air of yellow headlights about it, with a very long throw but surprisingly satisfying shift action. Did we mention the C3 feels decidedly French? 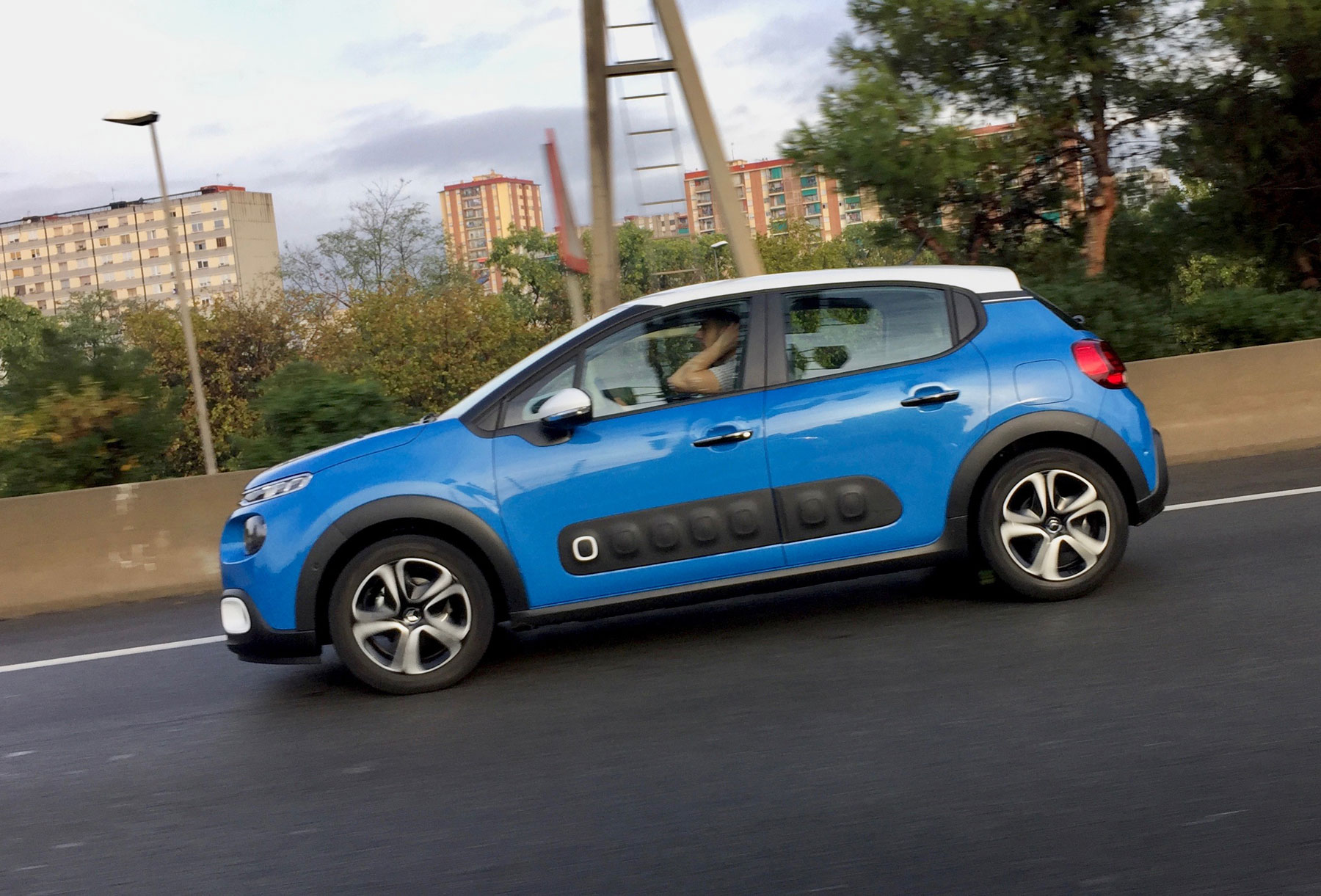 There are five engines to choose from: three 1.2-litre three-cylinder petrols and a pair of 1.6-litre four-cylinder diesels. The roads in and around Barcelona were either drenched or filled with traffic, but we were able to test the mid-range PureTech with 82hp and the higher-powered PureTech with 110hp.

In both flavours you’ll experience the familiar three-cylinder thrum and while there’s a little vibration transmitted through the pedals, it never becomes an issue. Indeed, the gearing is such that the peppy 1.2-litre engine is crying out to be taken to the redline. Peak power sits at between 5,550 and 5,750rpm, depending on the output.

It does feel a little out of its depth on a motorway, and on more than one occasion we reached for a sixth gear that wasn’t there. But given the nature of a supermini, it’s easy to forgive a little engine and road noise.

Less forgivable is the fact that the smaller of the two engines had a tendency to stutter at higher speeds: an occasional ‘hiccup’, as though the engine had cut out. We’d put it down to a quirk of our test car, had it not been for the fact that another journalist experienced similar issues.

Will the C3 be easy to live with?

This all depends on what you intend to do with it. Up front, the C3 is extremely well packaged, feeling every inch the minimalist lounge Citroen intended it to be.

It also offers 300 litres of boot space, which is 10 litres more than the Ford Fiesta, but 30 litres down on the Skoda Fabia. But it’s in the back seats where things start to go awry. Taller passengers may wish to explore alternative options. Yes, even a trip via Southern Rail.

Rear headroom is extremely limited, especially if you opt for the panoramic roof – a £400 option on the C3 Flair. But if your head and neck are suffering, spare a thought for your knees and legs, because legroom is also rather cramped.

Still, at least you can poke your head out of the window, which is something you can’t do in the C4 Cactus. While on the subject of practicality, the C3 offers a number of useful storage areas, including large door pockets and three cupholders.

Can I afford a new Citroen C3? 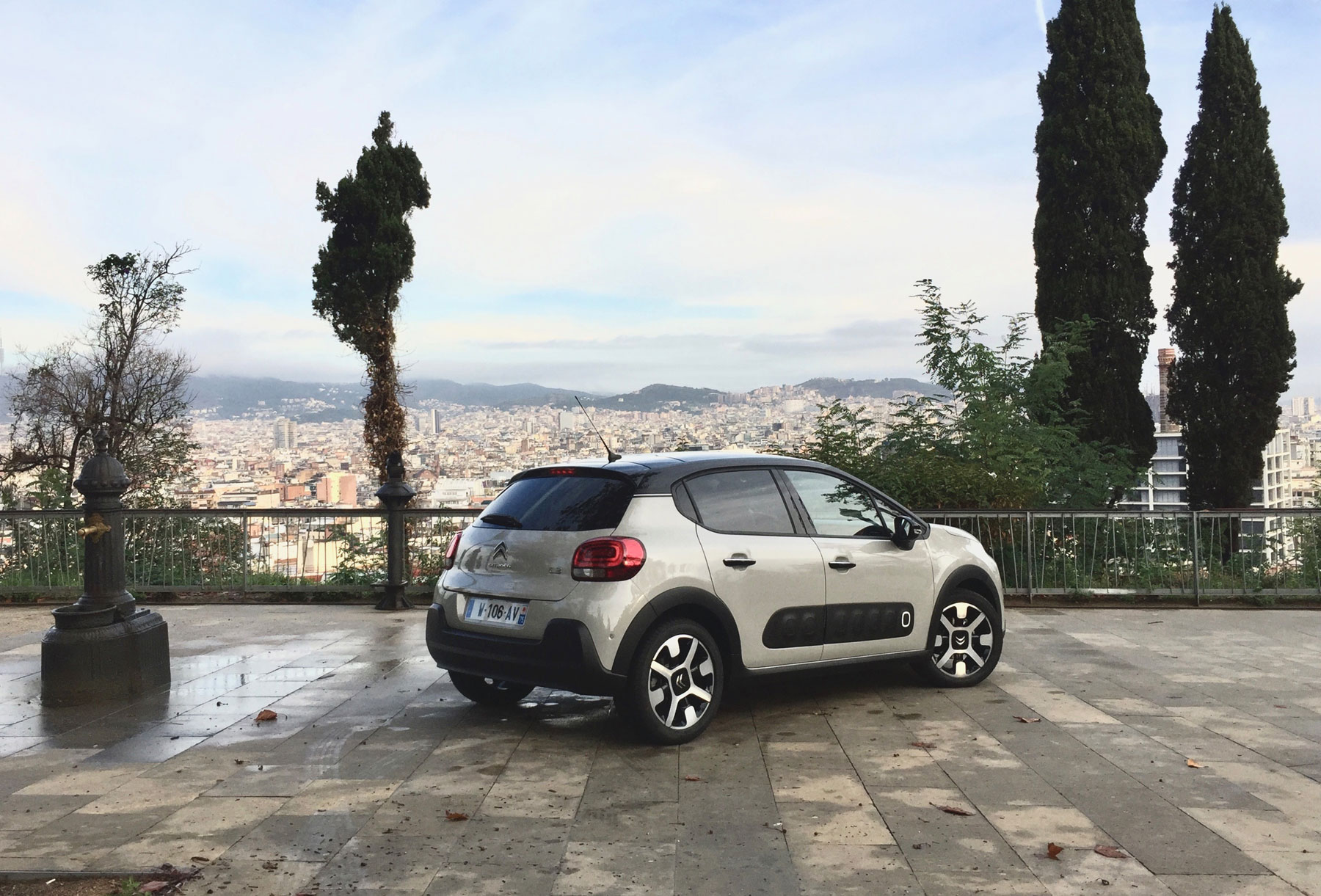 Should I buy a new Citroen C3?

The Citroen C3 is dripping in showroom appeal. It looks great, is blessed with a brilliant interior – in the front, at least – while the ConnectedCAM ensures it offers something new in a fiercely competitive and crowded sector.

But strip away the fancy duotone paint jobs and novelty factor of the HD camera, and you’re left with a supermini you’ll have to live with for three years plus. So, should you buy a Citroen C3?

Put it this way: we sincerely hope you do. The world needs more Almond Green, Cobalt Blue and Power Orange superminis, while the C3 is further proof that Citroen is following the right path. A future focused on comfort and technology feels very Citroen to us.

It’s not perfect: the lack of space in the rear is a big issue, we remain to be convinced that sticking all the controls on a touchscreen is a good idea, and the driving experience won’t suit everyone.

Rationally, it’s arguably a three-star supermini. But emotionally, it’s elevated to four stars, because it’s an easy car to love. Come January 2017, we hope the C3 becomes a familiar sight on Britain’s roads. You know what to do.