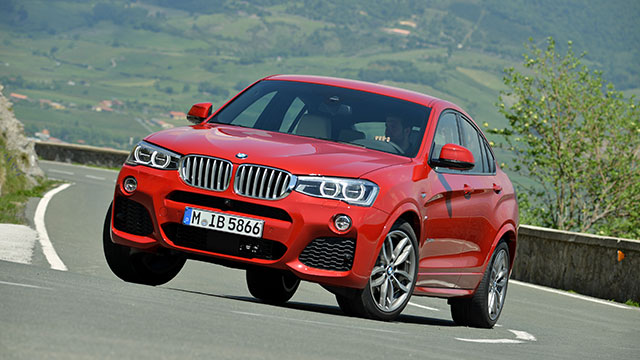 You can probably already see what’s going on here. The new BMW X4 is a smaller version of the once controversial BMW X6. Which is to say it’s an SUV with coupe pretensions. And it isn’t for the shy and retiring.

With around 250,000 X6s sold, BMW already knows this is a successful formula. Based on the X3, the X4’s reduced dimensions – and lower price positioning – should only serve to extend this success by making it available to a younger audience of more flamboyant car buyers. It is expected to be popular in China, the USA, Germany and Italy particularly, for exactly those reasons.

The X4 sacrifices a little of the pragmatic functionality that you find in ordinary 4x4s for the sake of what some would call style and others outrageous attention seeking. It is by no means a conventionally attractive machine, but it has a great deal of presence – BMW says it’s for customers looking to make a statement. One that’s presumably hard for others to ignore.

Yet beneath those slightly hunched up proportions there remains a substantial amount of boot space, room for four adults and – because this is a ‘coupe’ – a remarkably engaging driving experience. 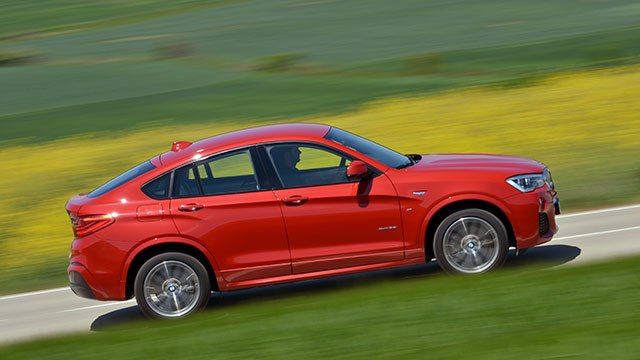 Although some 36mm lower than an X3 (as well as 14mm longer), the X4 still feels like a very tall and upright vehicle the first time you climb on board. The view of the road ahead is everything SUV buyers look for in terms visual security, that sense of being above it all that makes them feel safe.

The steering wheel, at least in the specced-up 35i twin-turbo straight-six petrol we’ve been driving (more on this in a moment), is one of those typically German sausage-thick BMW affairs; the dial pack and other instrumentation is clear, the interior architecture familiar from other BMWs. So far, so SUV.

It also rides nicely, and with actually – finally – rather well tuned variable ratio steering as standard, the X4 quickly begins to feel like it would swallow vast motorway distances with very little impact on driver fatigue. That’s the rep box ticked, then. Show’s over, go home.

You might want to think about taking the long way. For despite that initial sense of height, the X4 goes round corners with considerable panache. While it’s not quite as astonishingly brilliant as the Porsche Macan, the optional variable suspension system (£650-£940) delivers impressive roll resistance. Together with the standard fit BMW Performance Control – electronic torque vectoring on the rear axle that neutralises understeer by pushing power to the outside wheel, punching it through the turns – this makes it (ahem) highly entertaining.

The UK is taking diesel engines only, all with four-wheel drive. Entry-level cars get a six-speed manual gearbox as standard, but all variants are available with an efficient eight-speed automatic, which most will specify where it’s not already included (same with the variable suspension). This makes the engine in this test car somewhat irrelevant, but don’t be too disheartened, as we suspect the latest torque-rich diesel choices will suit the X4 better anyway. 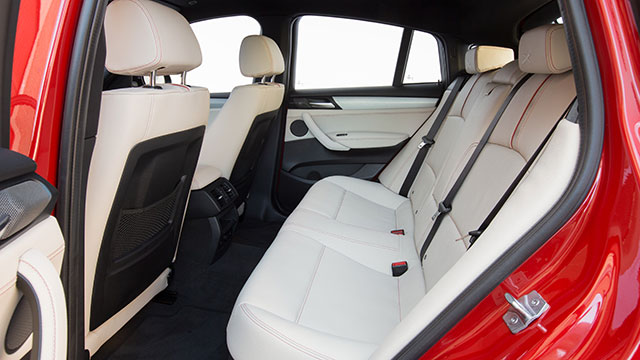 Although the X4 is undoubtedly a “statement” car, familiarity with the idea and deliberate effort on BMW’s part have toned it down compared to the X6. From the outside, gaping air intakes are accompanied by a strong emphasis on horizontal lines, intended to disguise the car’s bulk. There’s no mistaking that swoopier roofline, though, so exactly what compromises result?

Playing up the practicality element alongside that showboating statement making, all X4s come with 40:20:40 split-folding rear seats and an automatic opening tailgate. The boot is a useful 500 litres, rising to 1,400 litres with the rear seats stowed, and four six-foot adults should fit just fine – there’s plenty of legroom, and while rear headroom is compromised, it’s not by as much as you might expect. For comparison, the X3 offers 550-1,600 litres of boot space – and is a little less claustrophobic in the back. Both feature a rear door aperture that narrows towards the bottom, so access can be awkward.

The X4 is about £3,500 more expensive than the equivalent X3, however, so you do pay for the privilege of being different. The basic trim level is SE, which includes 18-inch allow wheels, front and rear parking sensors, Xenon headlights, heated front seats and the BMW Business Media package – in addition to the other standard features mentioned above. For another £1,500 you can have xLine trim, which gets posher detailing and Sports seats; £1,500 above this is M Sport, with 19-inch alloy wheels, bespoke body styling and M Sport suspension.

Though we haven’t been able to drive the diesels, we can tell you that even the least efficient 35d twin-turbo six-cylinder version emits no more than 157g/km CO2 and claims over 47mpg. Stop-start is standard on all models. 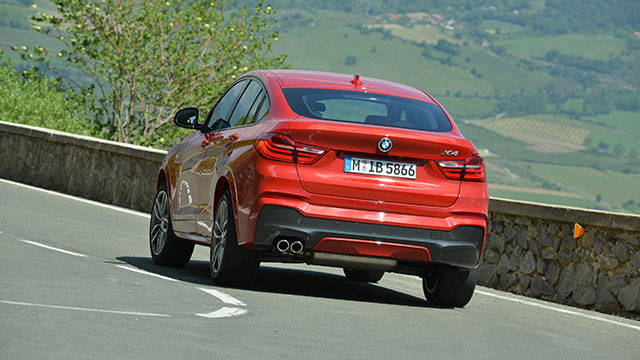 Whether those looks, that additional equipment, and the sharpened driving experience are really worth the extra money over the X3 is something that can really only be decided by you.