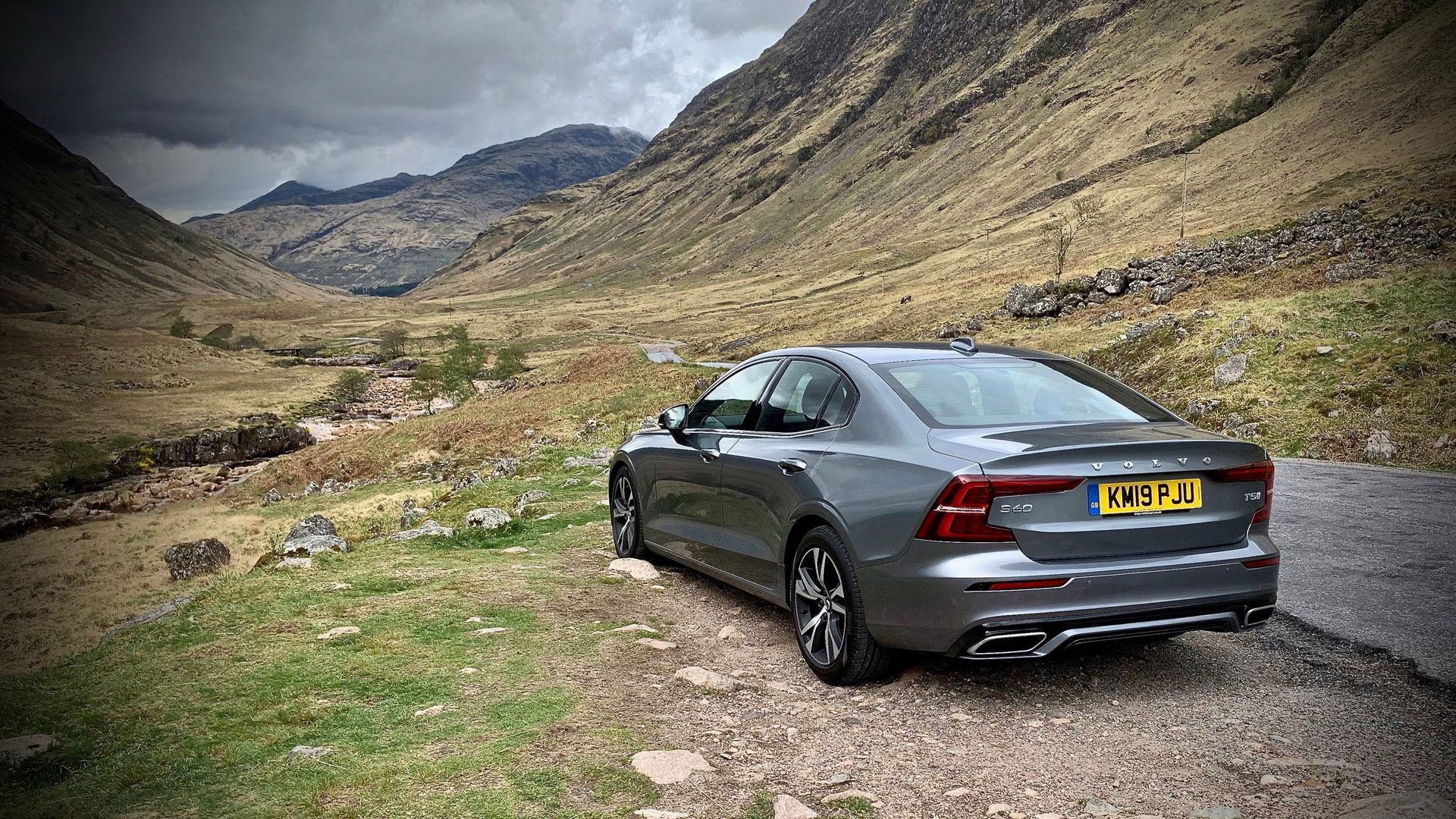 You could justifiably buy a new Volvo S60 on the strength of its looks alone, and I’d salute you for it. Volvo’s compact saloon is, without question, the best looking car in the segment. Heck, it might be one of the best looking new cars on sale in 2019.

And the chiselled, catwalk styling might be the S60’s strongest attribute, that’s if my first drive in Scotland is anything to go by. Behind those supermodel looks lies a car that’s very easy to like, but surprisingly difficult to love.

A case of style over substance, then? Read on to find out (if you can stop drooling at the pics).

As soon as I was told I’d be flying to Edinburgh to drive the S60, I had one destination on my mind: Glen Etive. It might be as clichéd as turning up at Scottish-themed fancy dress party wearing a kilt and a Rod Stewart wig, but the area in Scotland where 007 and M went ‘back in time’ has become a popular spot for fans of the 2012 film Skyfall.

Hold your breath and count to 10 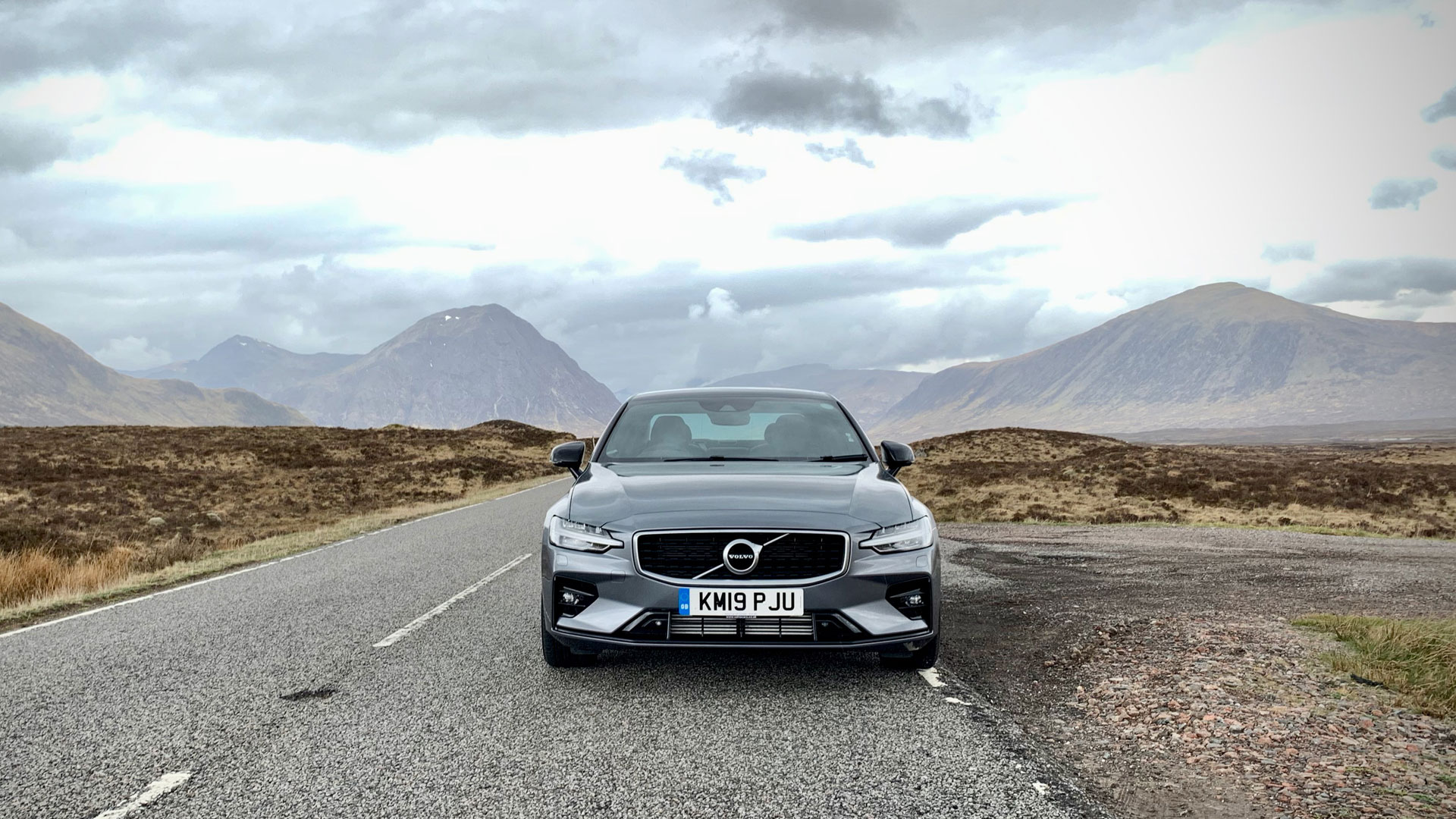 I wanted to venture beyond Skyfall; to continue along the road past the point at which the characters played by Daniel Craig and Dame Judi Dench stood in front of the DB5, staring into the middle distance, presumably feeling the effects of spending 500 miles in a 50-year-old Aston.

They’d have had no such problems in the S60. Volvo doesn’t build uncomfortable cars; the combination of superb seats, minimalist cabins and clever use of lighting means that driving one of its cars is no less relaxing than a foot massage from Enya.

The S60’s biggest problem is familiarity. It’s five years since the Volvo XC90 debuted in Geneva, and while the interior remains a fabulous example of fit, finish and ergonomics, the wow-factor diminishes with every subsequent new car. You kinda know what to expect. 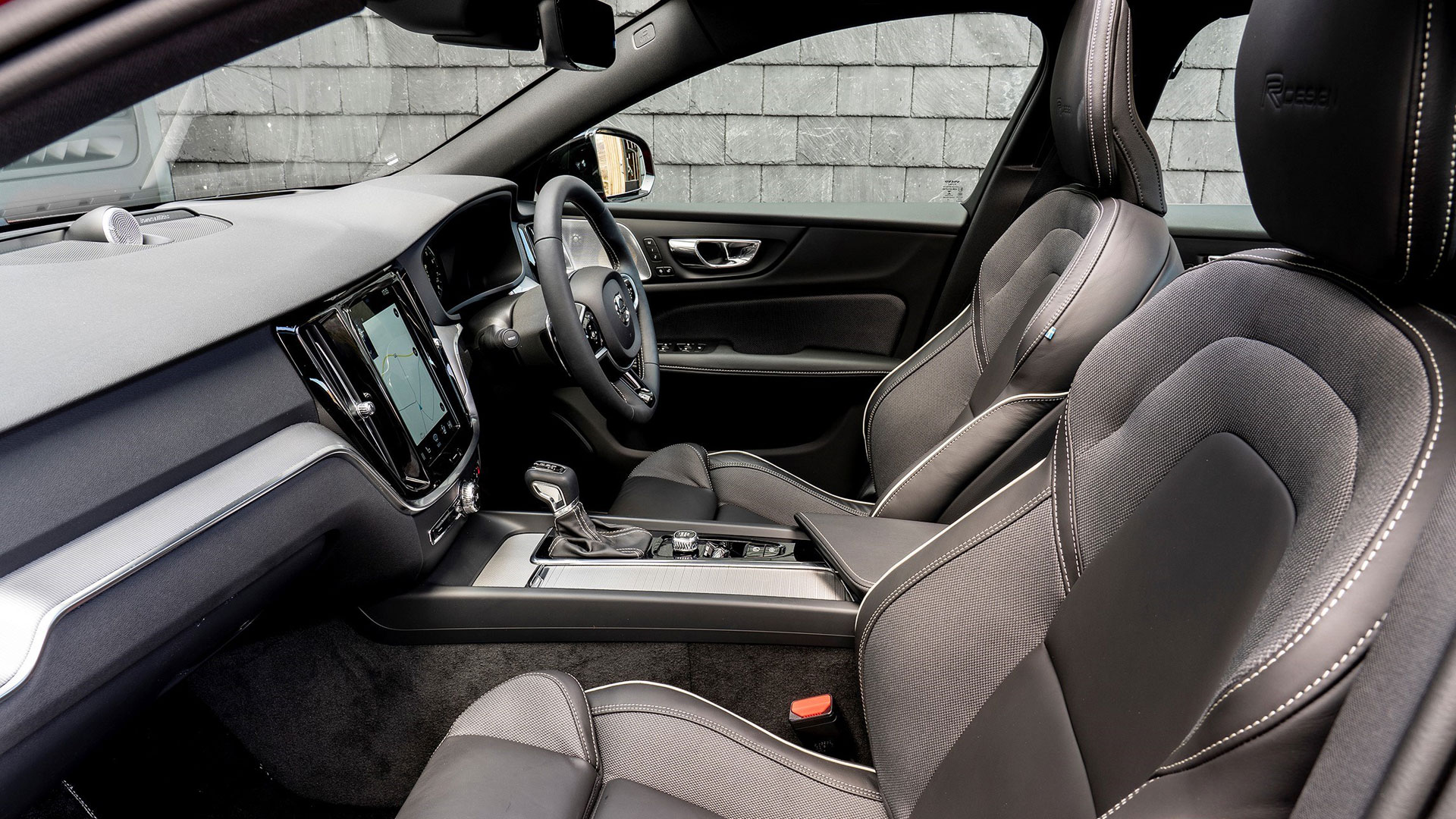 Not that I was complaining as I made my way out of the airport car park and into the morning commute. The first UK cars are offered in R-Design Edition spec, which means all but the most opulent and lavish equipment is fitted as standard.

The sea of charcoal that swathes the cabin is as bright and cheery as a gentleman’s wash bag, but the gloom is pierced by a metal mesh inlay running across the dashboard. Predictably, the quality is first-rate, but I don’t remember the air vents feeling this flimsy in Volvo’s larger cars. Probably my memory playing tricks on me. 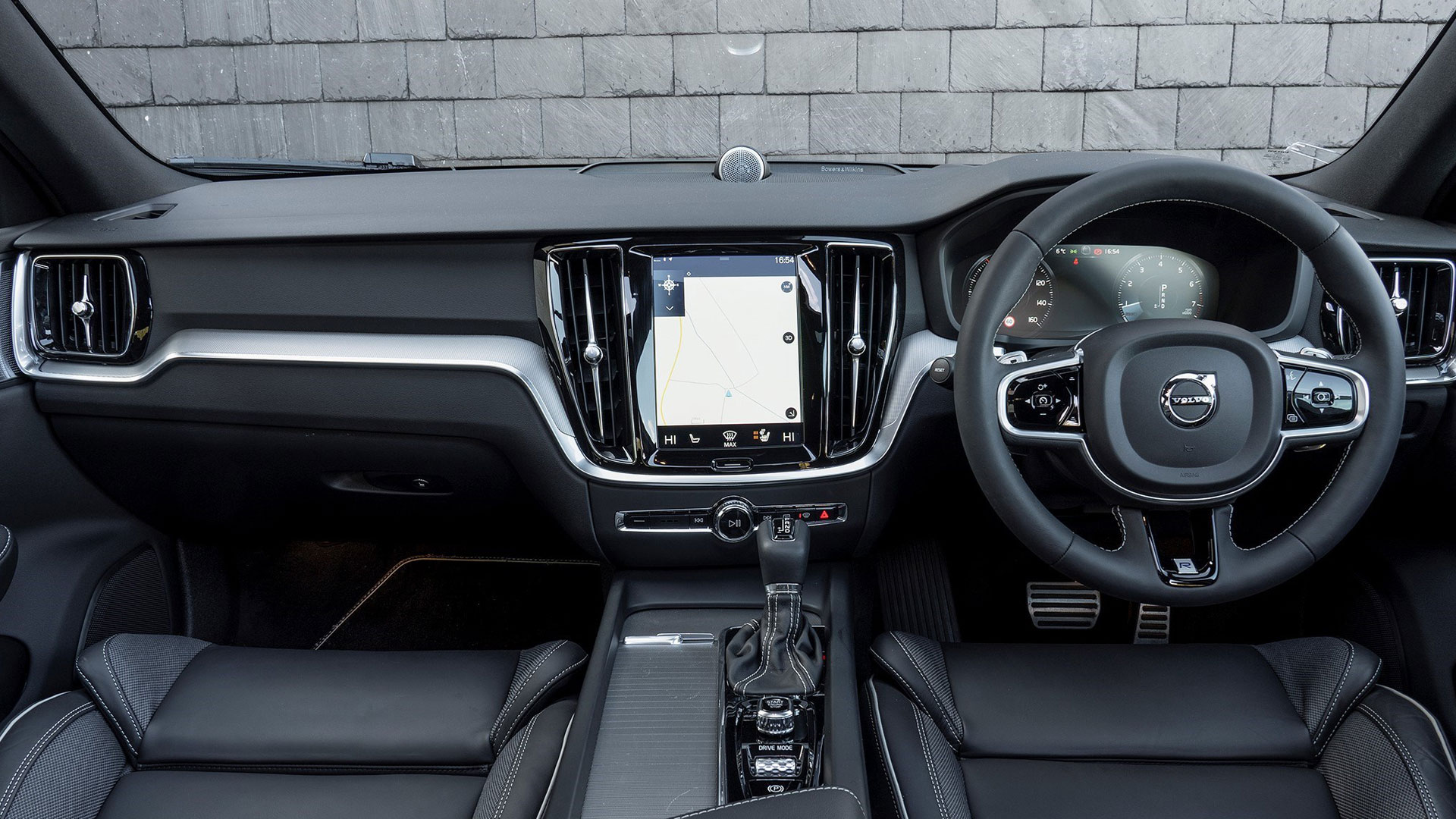 “Don’t drive tired”, proclaimed the matrix display above the M9 motorway, a stark reminder that I’d been up since 3am and crowbarred into a crevice on a red-eye flight from Bristol. I lowered the Volvo’s seat and steering wheel heating, reduced the temperature of the climate control, and changed the sat-nav route setting to ‘scenic’. Time to wake up.

The Sensus nine-inch touchscreen remains a visual treat, but too many commands and settings are hidden away and you’re required to take your eyes off the road for too long in order to change things. Fortunately, I remembered that Volvo’s voice control is one of the best, so I used that throughout the journey.

Try doing that in your DB5, Bond. “Set passenger seat to eject…”

The sat-nav directed me through Stirling, where the S60 seemed to be as eye-catching as the castle sat atop the rugged crag. I caught sight of at least three chaps turning their heads to get a better look, and it’s not hard to see why. 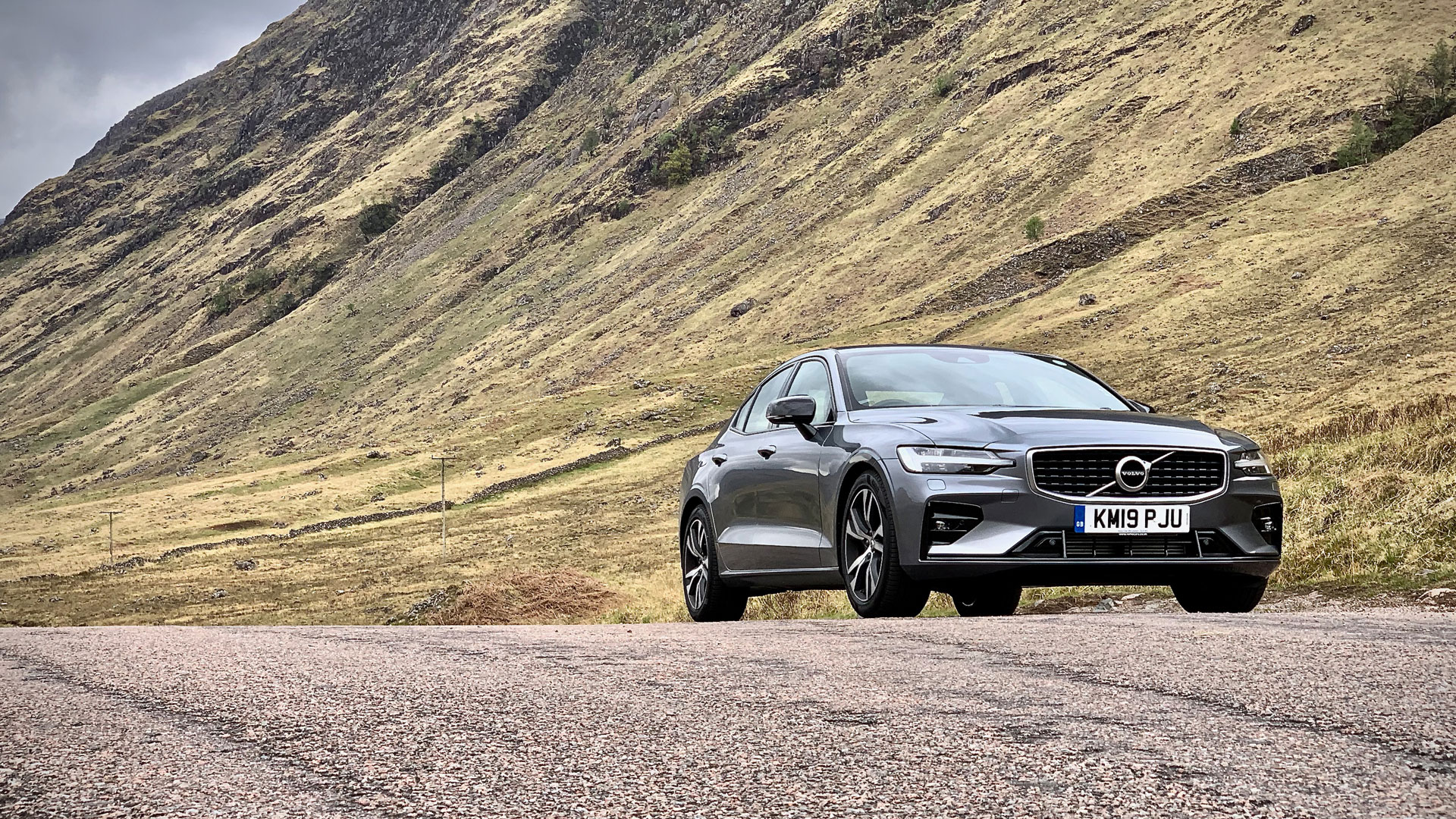 The S60 looks alluring from any angle: as toned as a marathon runner, curvaceous in all the right places and far better resolved than the S90. It takes a lot to upstage the magnificent beauty of Scotland, but the S60 achieves it. It warrants a closer look, too. Note the voluptuous haunches and the wafer-thin panel gaps.

The R-Design treatment certainly helps, with the S60 packing high-gloss black trim, dual integrated exhaust pipes and 18-inch diamond-cut alloy wheels. The good news is that my test car was running on the standard 18s, which proves you don’t have to upgrade to the probable-ride-ruining 19- or 20-inch rims to achieve maximum glamour.

So far, so good, then. If cars were judged on the strength of their styling and cabin, Volvo would be off to Ikea in search of another trophy cabinet for another ‘winner takes all’ victory. Other Swedish clichés are available. 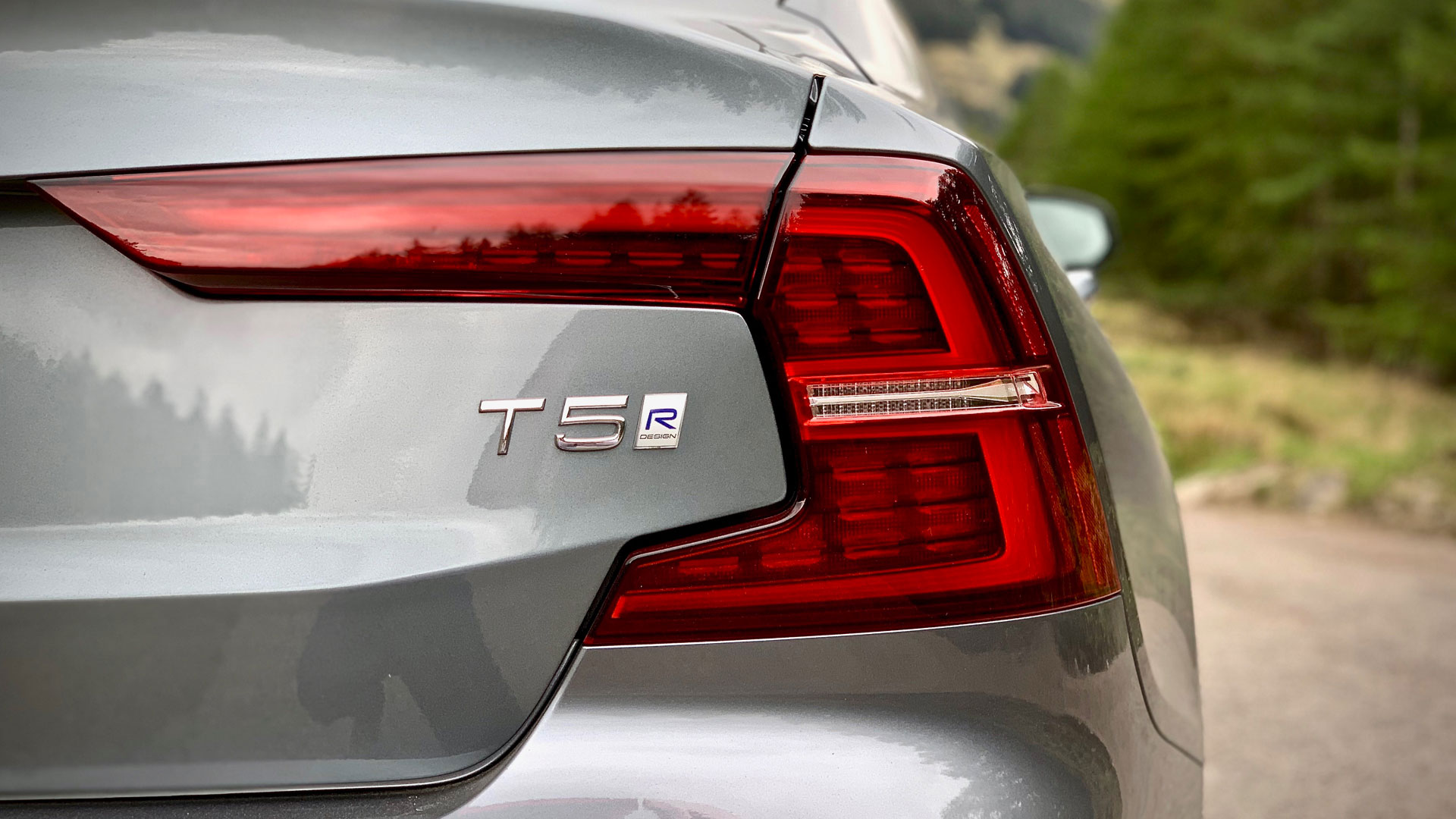 But it’s at this point that the S60 starts to lose some of its lustre. There’s enough here for a terrific first date, but a lasting relationship might be off the cards.

Power is sourced from a 2.0-litre four-cylinder T5 engine producing 250hp and 258lb ft of torque, which sounds great on paper, but is more ‘meh’ in reality. The engine is totally devoid of character, and although the peak power appears at 5,500pm, the engine sounds strained when you reach the upper reaches of the rev counter – there’s no reward for pushing the S60 hard.

It’s strange, because the engine is far from slow. The 0-62mph time is a not-too-shabby 6.5 seconds, and because the torque is available from 1,800 to 4,800rpm, the S60 makes light work of slow-moving camper vans, mobile libraries and coaches. Yes, I’m speaking from experience here. 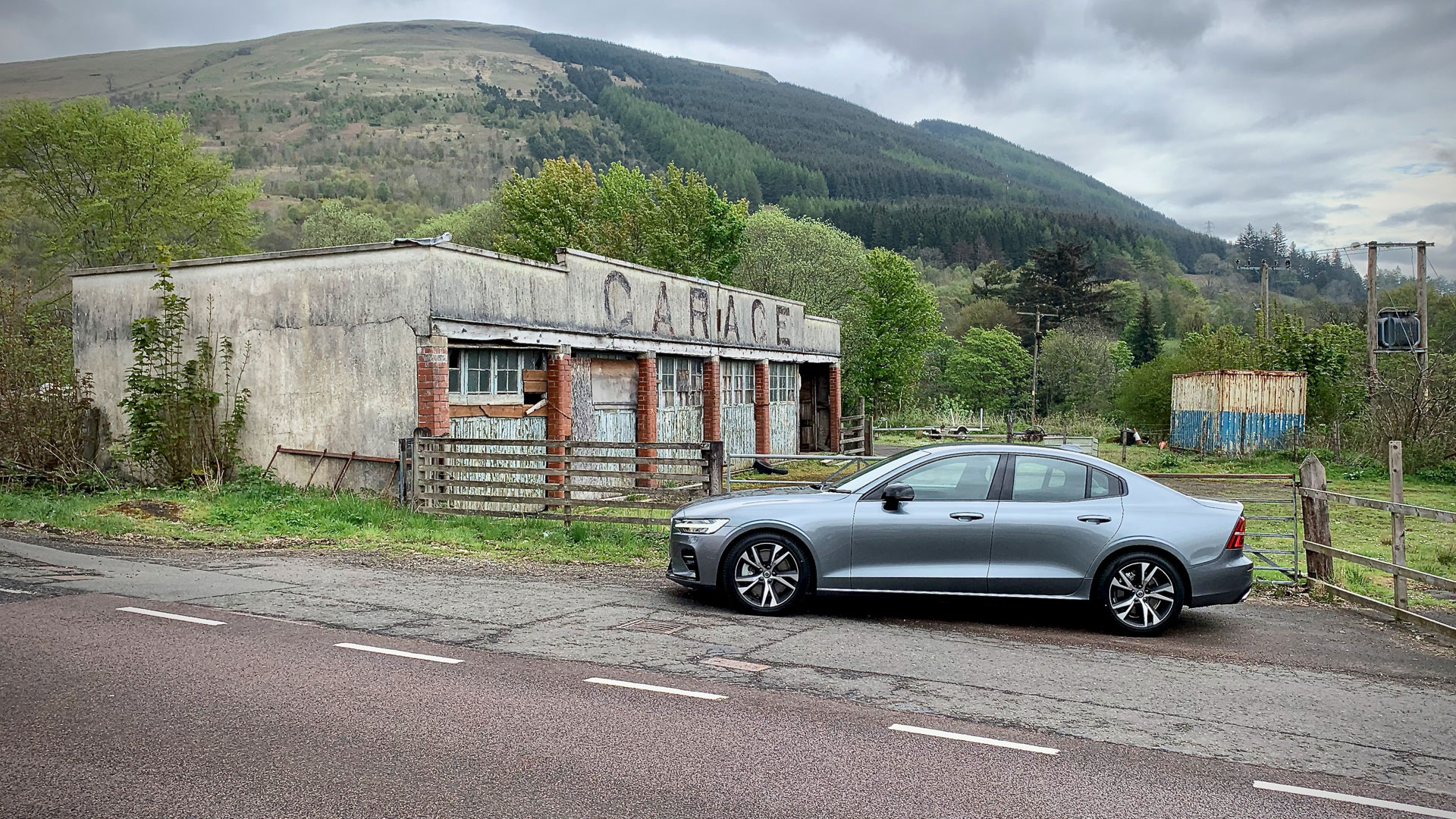 Yet it never feels exciting, even in Dynamic mode, when the throttle is at its most responsive and the entire car feels tauter and more focused. It doesn’t help that the eight-speed transmission appears to prefer a slow dance to a waltz, with even the paddles seemingly unable to inject a dose of excitement.

This might be a touch unfair: Volvo isn’t pitching the S60 as a performance saloon, but when the roads are as good as this, it should be possible to have fun.

Accelerate hard and there’s a touch of torque steer, with the front end feeling detached from the asphalt beneath the wheels. This ‘floating’ sensation is joined by steering that is short on feel and too light in anything other than Dynamic mode. It’s not unpleasant to drive, but it’s far from engaging.

This might not matter in the U.S., where the S60 is built at Volvo’s new plant in South Carolina, because corners haven’t been invented there. But if you’re touring Scotland and fancy some excitement to go with the stunning scenery, look elsewhere. 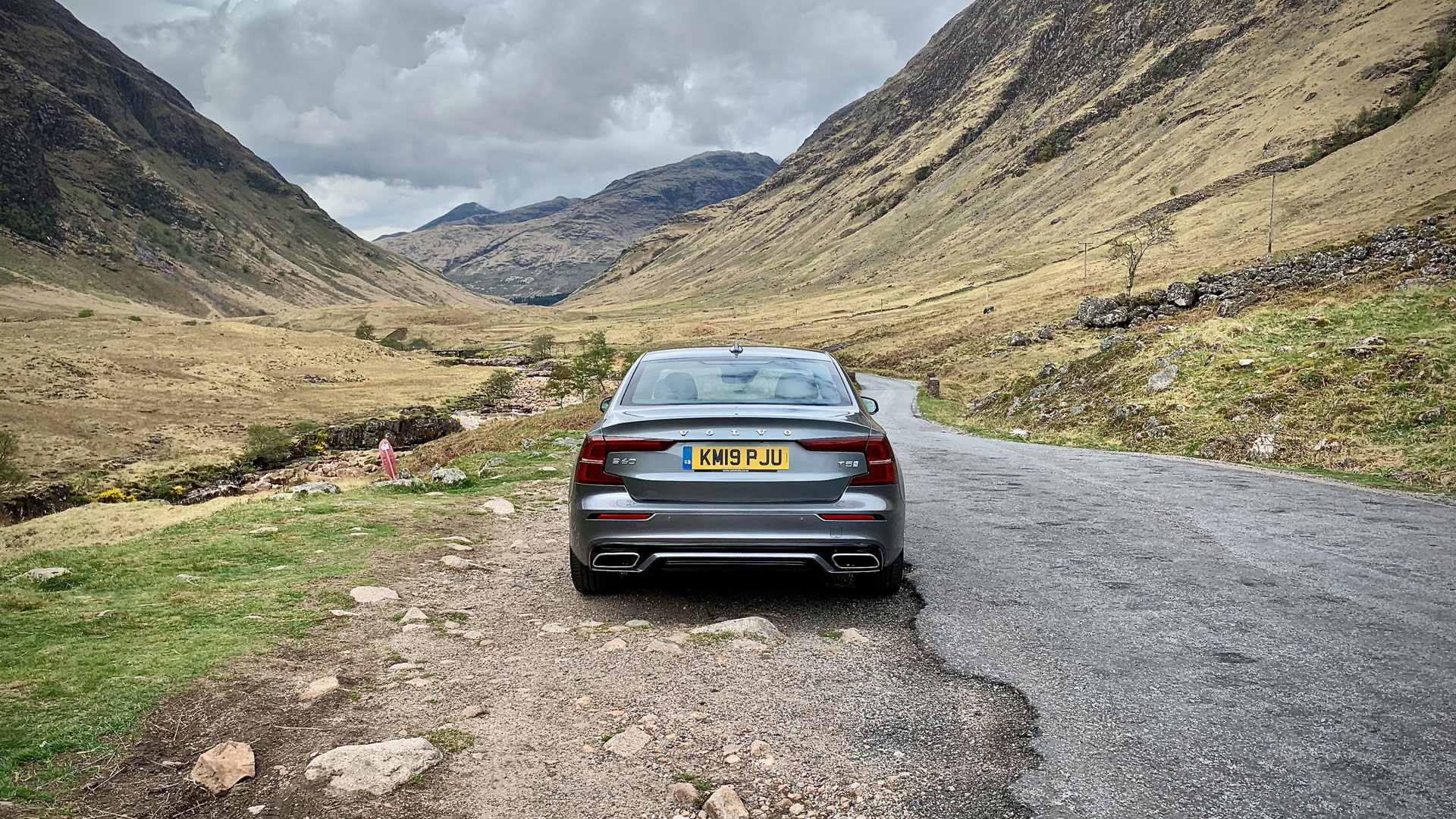 Just before noon, I was parked at the precise spot where Craig and Dench stared into the Scottish mist. It’s easy to find – just look for the ‘layby’ created by seven years of location-hunting film fans. This must be the only layby in the world created indirectly by a Dame and a 007. There’s another worn-out patch of Scotland on the other side of the road, created by folk turning around and heading back to the A82.

But I wasn’t going back. Instead, I continued beyond the famous spot, taking the single track Glen Etive Road to its conclusion. For the benefit of any doubt, Bond didn’t continue along this road – it’s a dead-end – and Skyfall Lodge was built on Hankley Common, Surrey. But you probably knew that already.

It’s just as well Bond didn’t take the Aston too much further. In places, the road resembles Belgian pavé, which would have shaken and stirred the DB5 to bits long before Javier Bardem’s helicopter loomed into view. 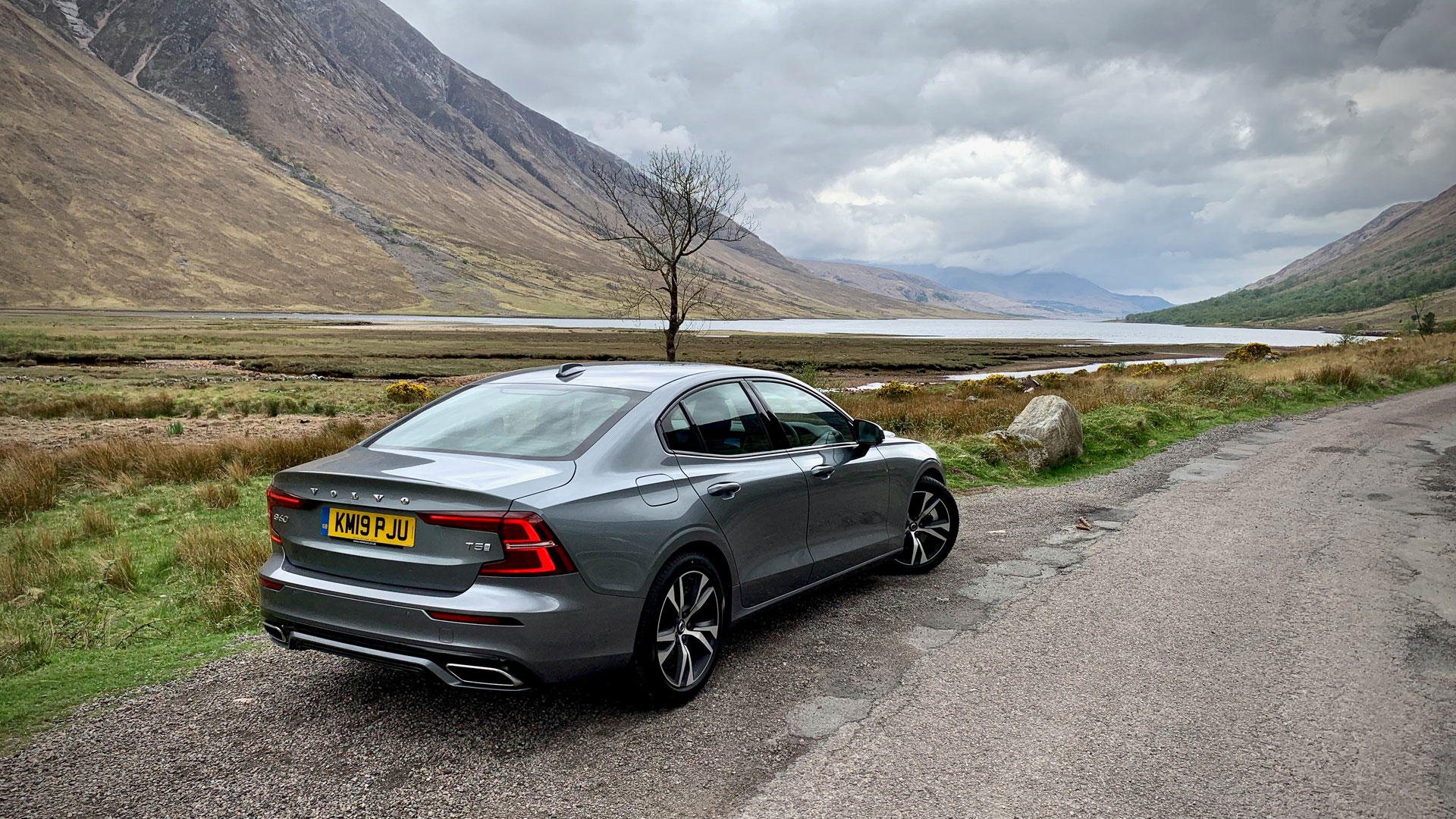 The Comfort setting is advised if you value your spine – I dread to think what the S60 would be like on 20-inch rims. On 18s, the ride is a little on the firm side, if far from uncomfortable, but given the S60’s lack of precision, I’d have preferred it to be a little softer.

The 12-mile road follows the path of the River Etive, taking in open moorland, forests and small Scottish homesteads as it makes it way through the mountainous landscape.

The further you travel, the more you feel like you’re driving into the unknown, although the feeling of isolation is punctured by the endless stream of black Vauxhall Corsa hire cars. Still, it makes a change from the endless stream of yellow Arnold Clark stickers you see away from the tourist routes in Scotland. 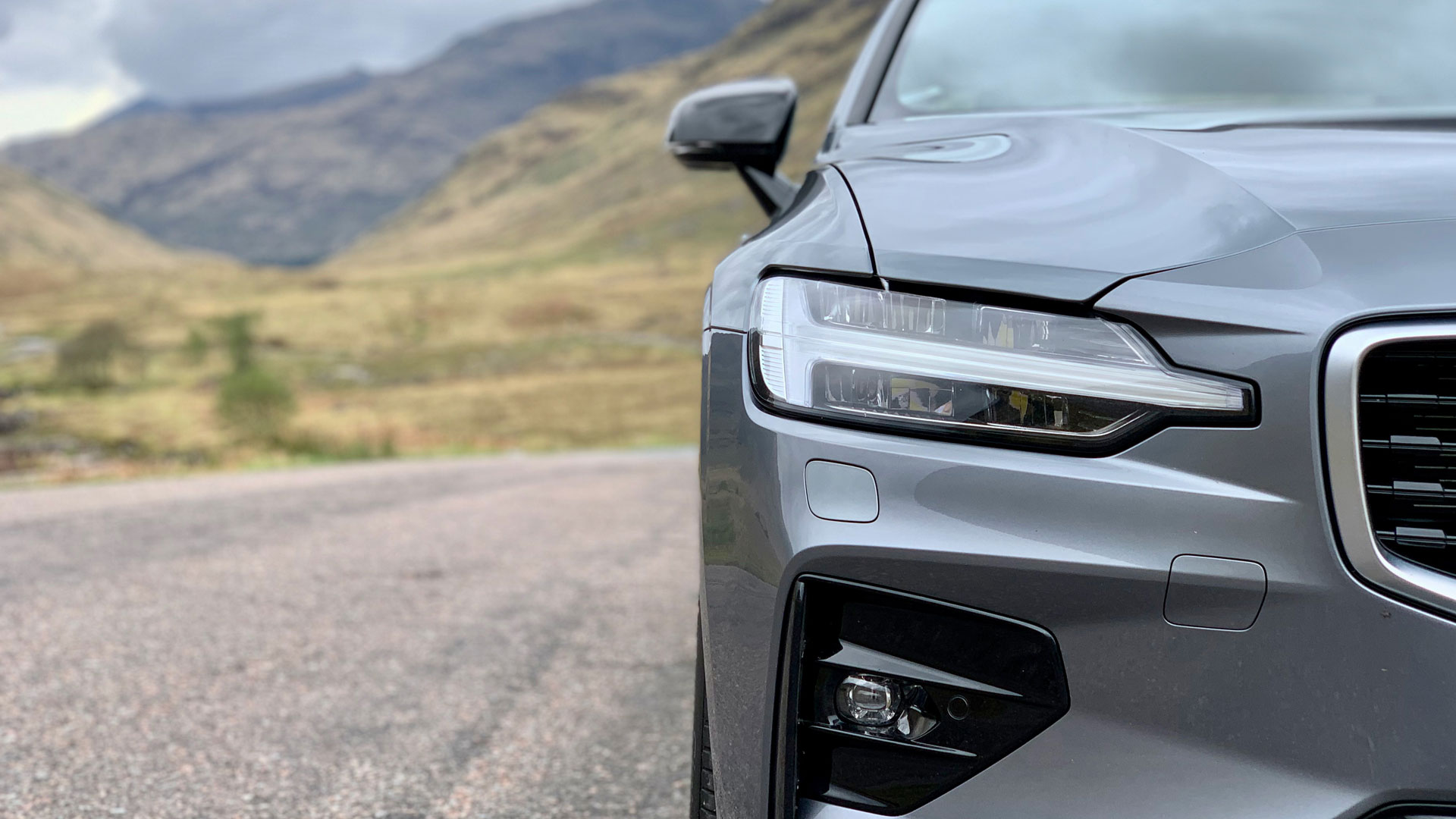 An hour or so later, not only was the weather on the turn, but the clock was ticking ever closer to my departure from Edinburgh Airport. Bond had a date with Raoul Silva – and M had a date with death – but I had little more than an Easyjet booking to look forward to.

The return leg was a frustrating mix of poor weather, coaches, roadworks and intermittent digital radio signal. I tried one last time to extract some enjoyment from the S60, but I reached the conclusion that it’s a little like fast food: quick, but lacking in substance.

Lots of people are posting photos of the new Volvo S60 in scenic locations in Scotland.
Here’s one of the S60 parked at the Tesco Express in Callander. pic.twitter.com/aK4X39KDz1

A more pertinent issue would be to work out where the new S60 sits in the UK market. Will the styling, cabin and safety credentials be enough to counter the less-than-sparkling performance and the rather limited choice of engines and trim levels? A T8 plug-in hybrid, Polestar Engineered version and Inscription trim will be added in the future.

As I said at the beginning, you could buy a Volvo S60 on the strength of its looks and live happily ever after knowing that your car looks a million dollars. And you will enjoy some exclusivity – Volvo says it will “achieve higher sales than the outgoing S60”.

Volvo sold 960 previous-generation S60s last year, so the company is not expecting huge numbers from its compact exec. Standing out from the me-too German cars is almost guaranteed in an S60.

We will stand tall 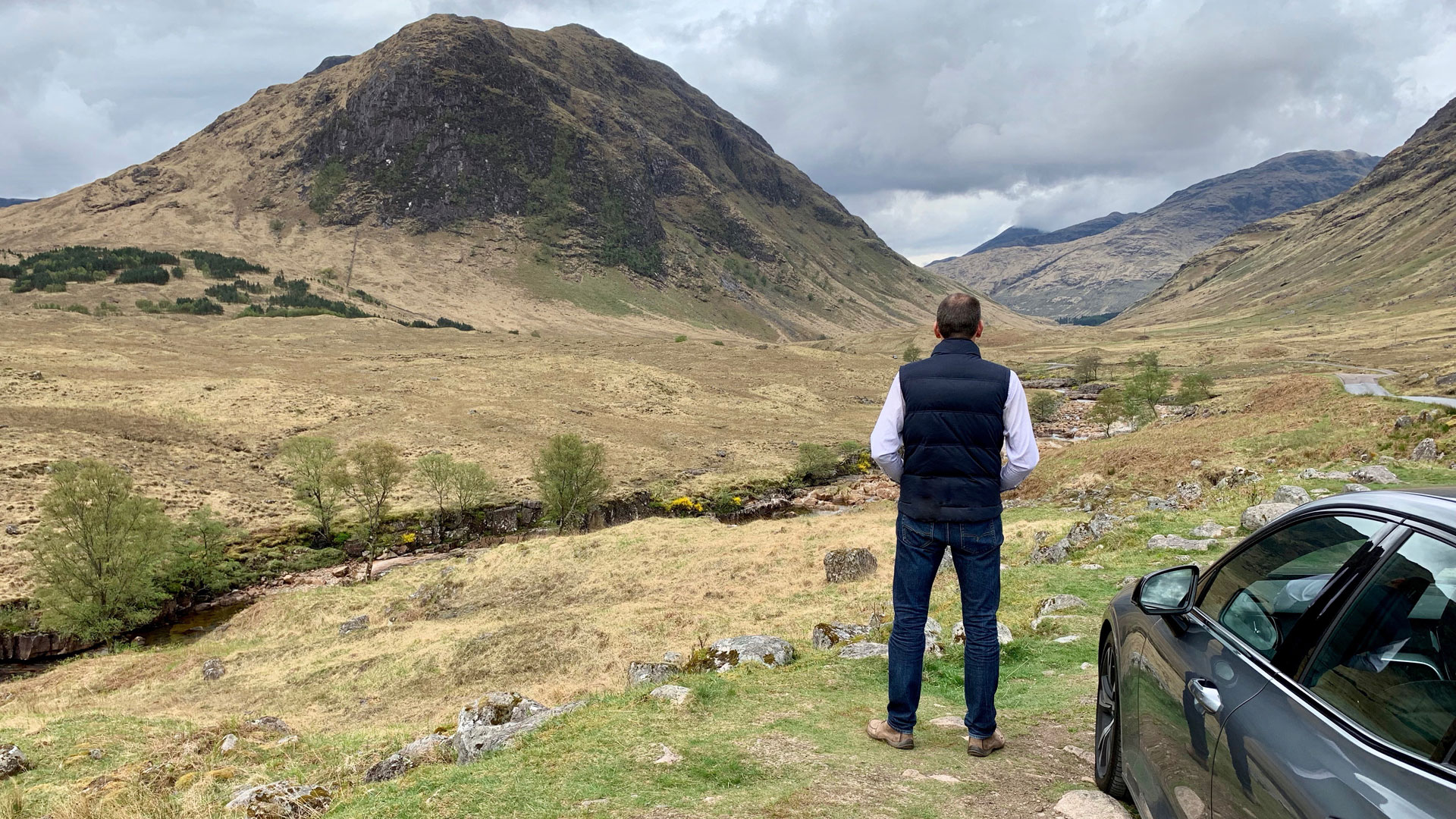 Part of me doesn’t want to reach a conclusion, and not just because I’m forever being distracted by the library of S60 images on my desktop.

Please don’t get me wrong: there is so much to love about the S60. The seats in the R-Design are fabulous, the cabin is a delight and it’s probably safer than covering yourself in bubble wrap and never leaving the house.

So, like Bond, I’m going to stare into the middle distance and contemplate a more decisive future for the S60. As a trailer for the main feature, the T5 R-Design Edition is a competent teaser. Here’s hoping the Polestar version is more of a thriller, leaving the Inscription to feel as cosetting and cosy as watching a black and white movie in front of the fire on a wet Sunday afternoon.

Not much of a conclusion, is it? But what were you expecting, an exploding pen?