We spent a month wafting about in an original Audi S8 – the ultimate in early 2000s style, refinement and quick getaways... 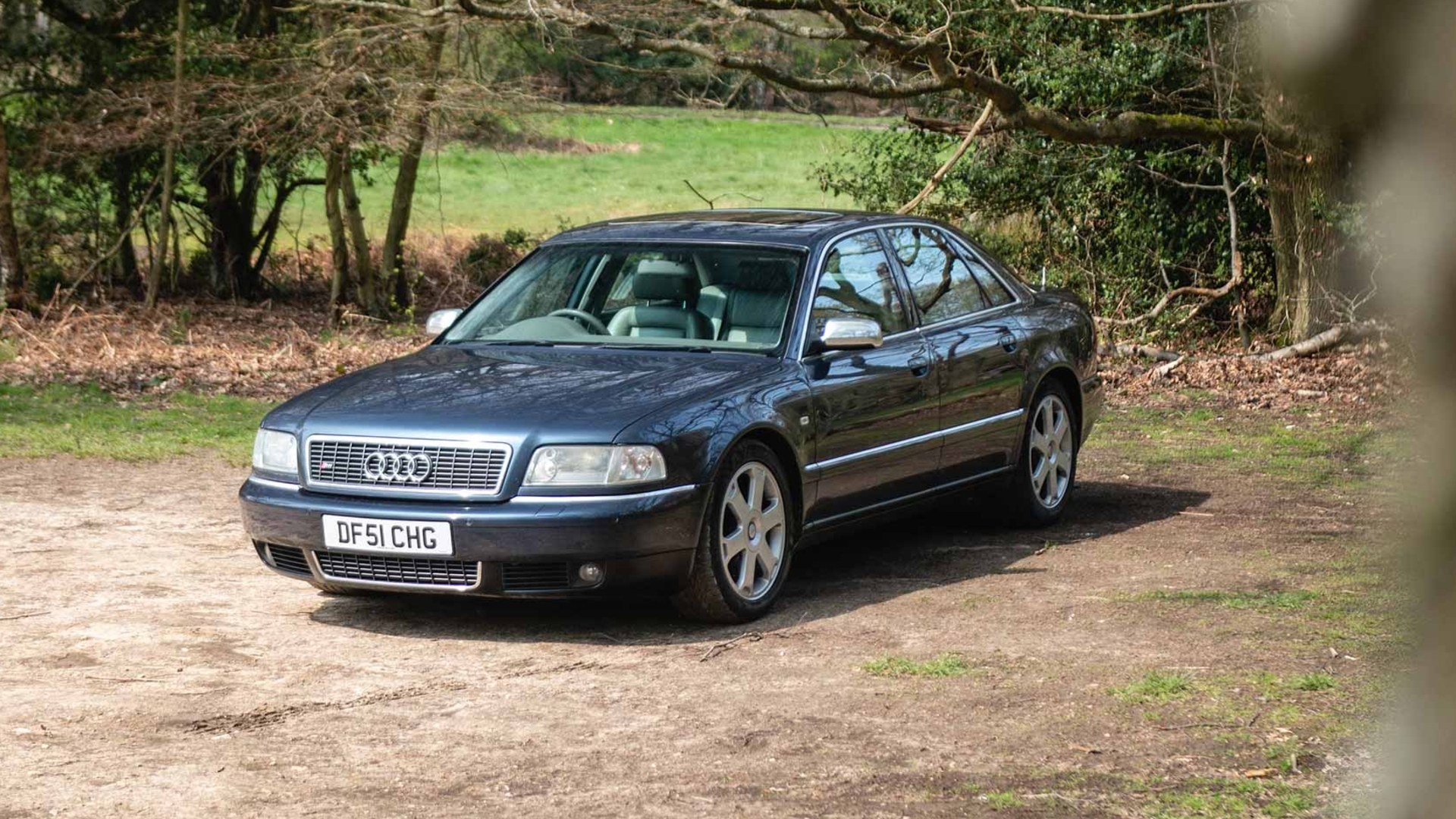 It’s the tail end of 2001. The Millennium Bug has buggered off and the Millennium Dome will soon be sold on. Meanwhile, the coolest super saloon on the block is the original (D2) Audi S8.

Despite starring in one of Hollywood’s most epic car chases (in 1998’s Ronin), the subtle S8 flew under the radar. It’s a bit of a unicorn these days, garnering respectful nods from the sort of car geeks you’d avoid at a dinner party. We absolutely loved it. 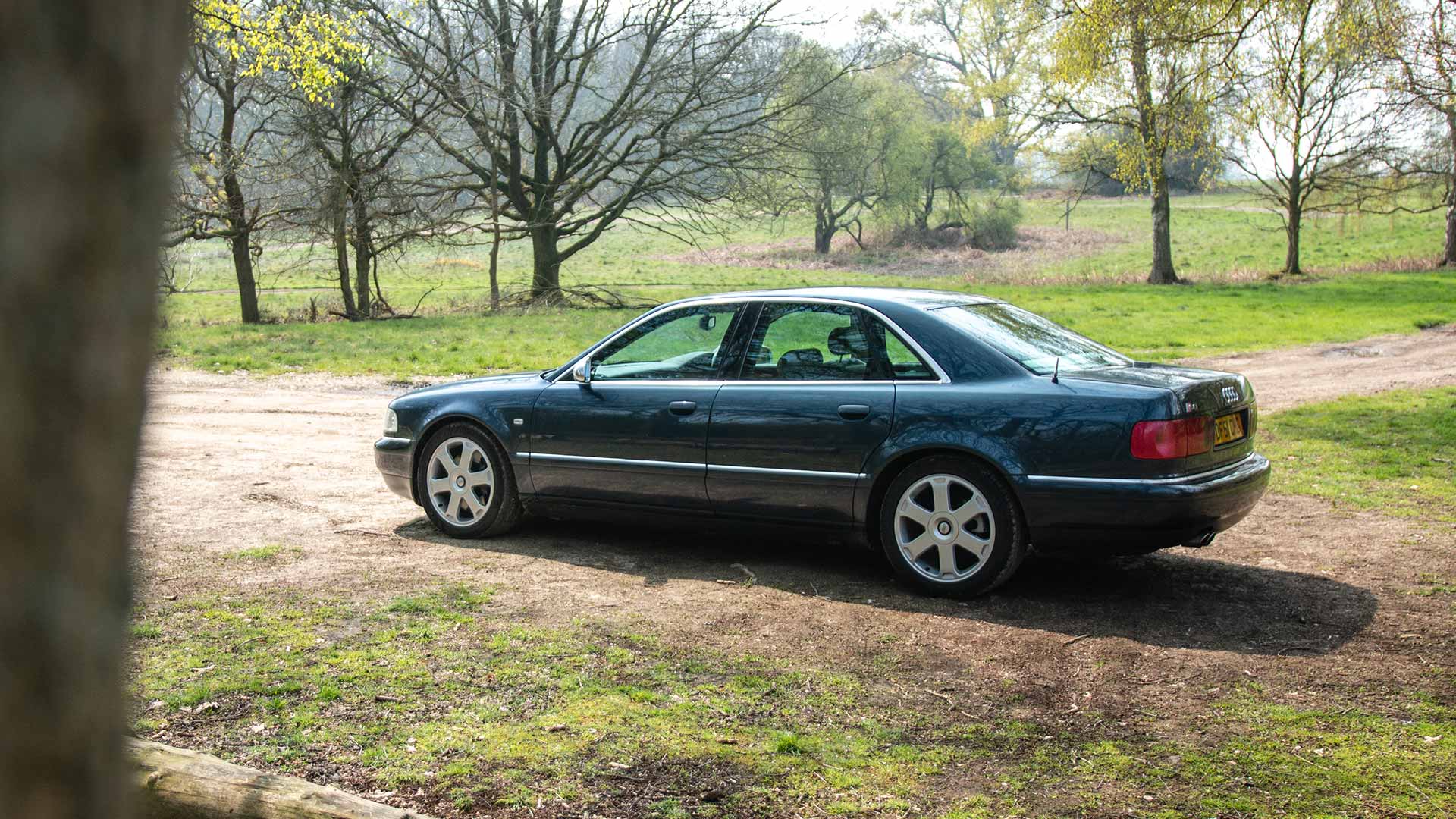 In the over-styled, over-sized, and obese automotive world of 2019, the S8 looks modest: perfectly proportioned and effortlessly tasteful. It’s a collector of double-takes, as onlookers realise this low-slung saloon isn’t a typical old Audi. Watching it trundle into the office car park was enough to eke an ‘Ooohh’ out of several MR staffers.

The first S8 was launched in 1996, some 10 years before the R8 supercar arrived to drag Audi’s music-video appeal up by the scruff of the neck. Big wheels and those signature alloy mirror covers complement flashes of chrome on the grilles and window trims. Today, that sounds like a paint-by-numbers Audi S model. Back then, it was über-cool.

Our S8 – on loan from Audi UK’s extensive heritage fleet – is no spring chicken. In our month-long stewardship, its mileage ticked over the 157,000 mark. As such, some of the paint is a bit faded and the leather a touch tired. No matter, we love a bit of patina and it is, after all, a mile-munching luxo-barge.

Read our long-term review of the classic Audi A4 DTM 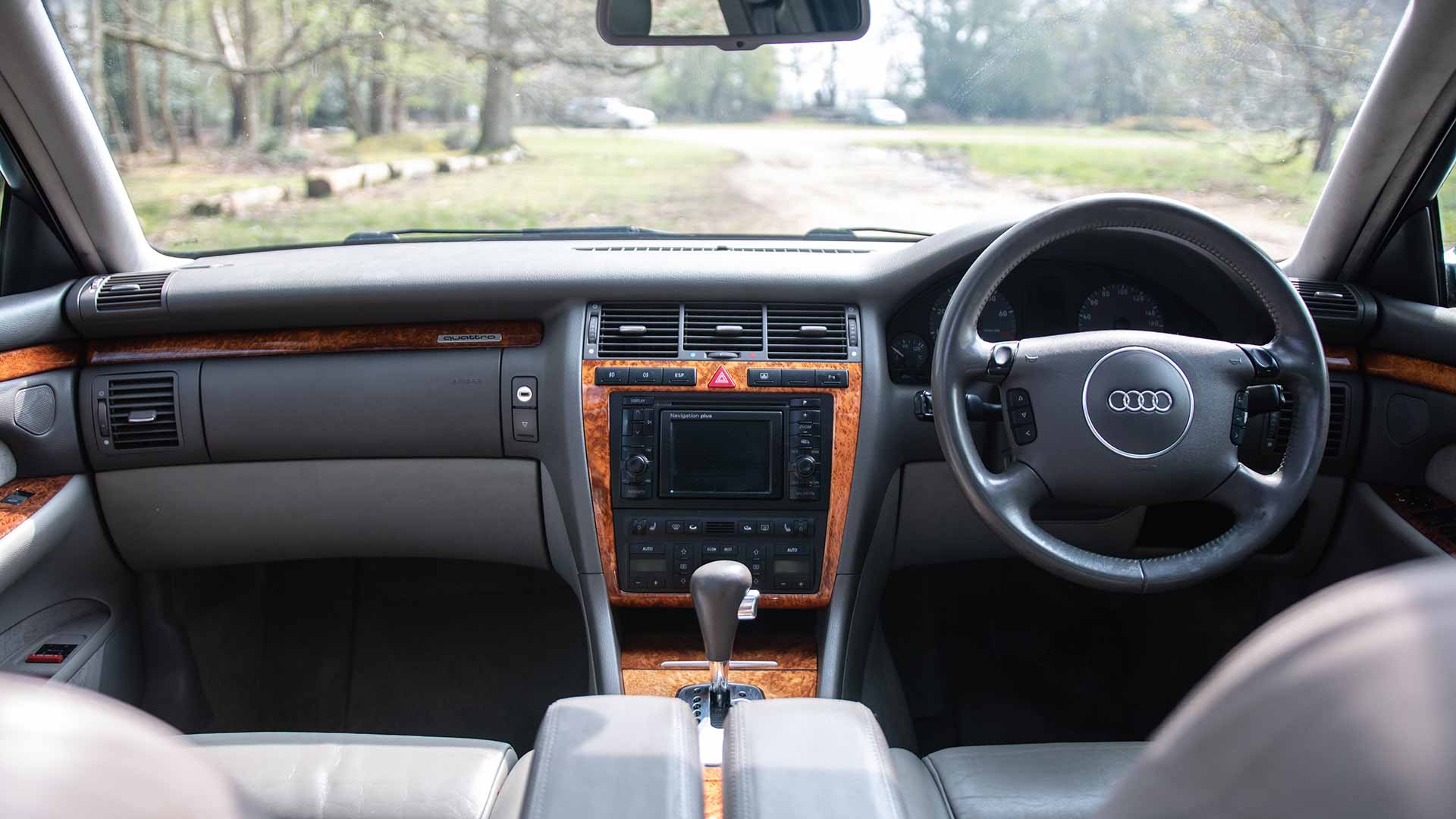 Getting inside, it couldn’t be more ‘2001’ if Ricky Martin was blaring out of the stereo. The leather chairs – yes these are chairs, not seats – absorb you. The tiny infotainment screen is dim in daylight, and outdone in the dark by quintessential Audi red backlighting. The plentiful wood shows even this most modern premium marque was chasing old-school luxury tropes back then and there’s no sign of the stylish sloping centre console of subsequent generations just yet.

The electric rear blind is perfect for shielding back-seat passengers from the sun, or hiding Justin Timberlake from prying paparazzi lenses (possibly).

Long journeys are… lined in wood and leather. pic.twitter.com/06VDzqgD4R

For its comparatively slight proportions – it’s not much larger than a current A4 – the S8 is nicely spacious inside. The control weights are heavy, the buttons make a satisfying click and the shifter for the automatic gearbox has a hefty clunk that today’s drive buttons could never hope to replicate. Once your seat and mirrors are adjusted, it’s one of those cars that feels so right – an effect amplified once you hit the road. 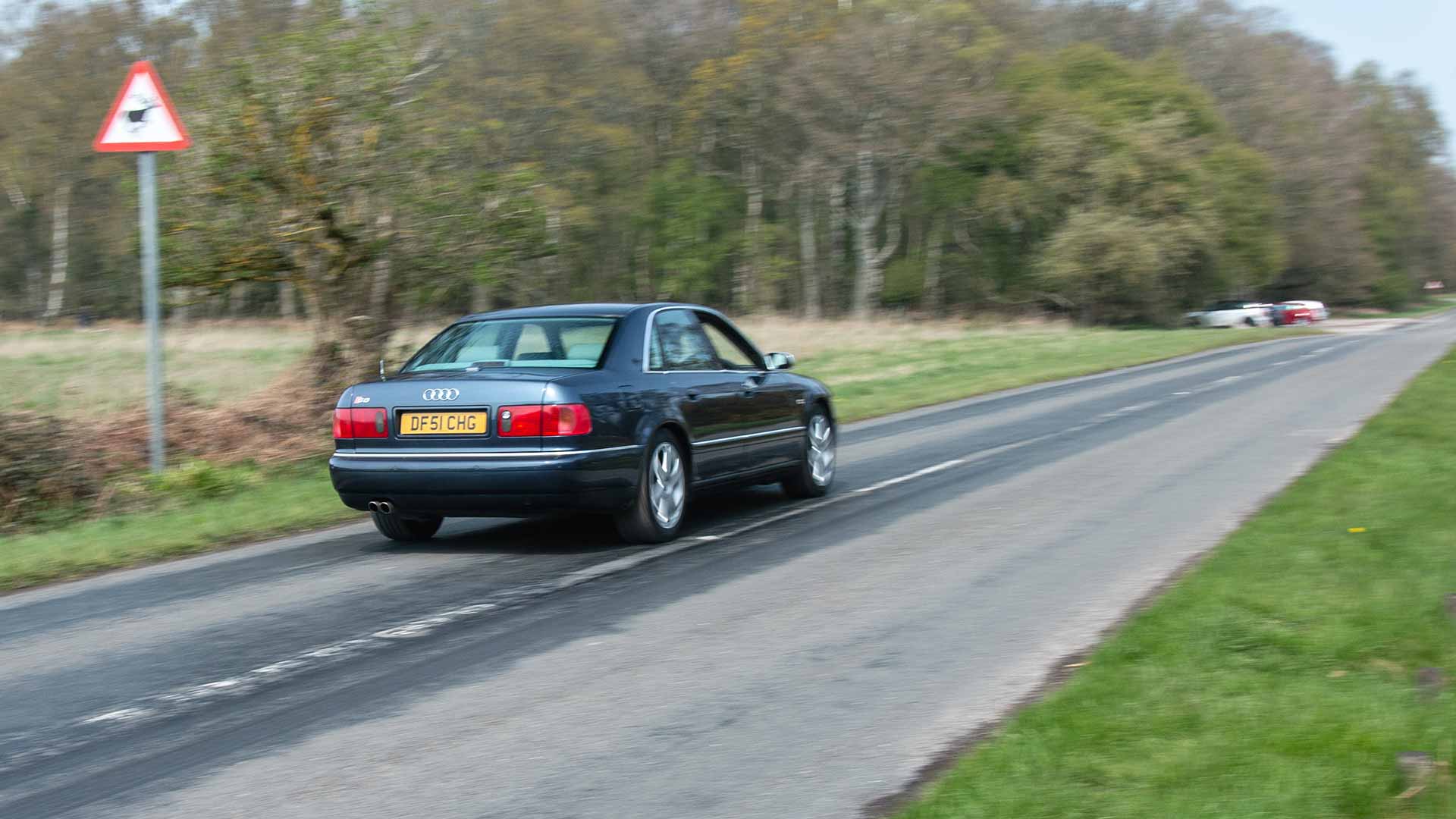 No starter buttons, no keyless go: the key goes in the column, kids. Turn it, and a nondescript hum fills the cabin as the 4.2-litre 40-valve V8 coughs into life. Yes, this engine would inform the unit that found its way into the middle of the R8.

Here, it’s no 420hp screamer, putting out 355hp, which goes to ground via a five-speed automatic transmission.

Our @AudiUK S8 classic long-term review comes out today. It does a rare thing of having the ‘super’ bit in super saloon, without it being gratuitous. A lovely car to burble about in. Noisier on the outside than I thought, too… pic.twitter.com/SXwI19VeSc

Engage drive, release the manual handbrake and the waft-tastic regression session begins. At the risk of outing myself for bad driving habits, the S8 is a car that inspires a spot of ‘palming’. That is, flat-handing the top of the wheel and guiding it round as you slither around urban streets.

Gear changes are a bit lurchy, exacerbated by the eager-to-rev engine. Make the V8 sing, however, and a reputation forged by Ronin is quickly justified. This is perfect early-2000s car chase fodder, as evidenced by the fact that Jason Statham swapped his BMW 7 Series for an A8 in sequels to The Transporter. What Ultimate Driving Machine? 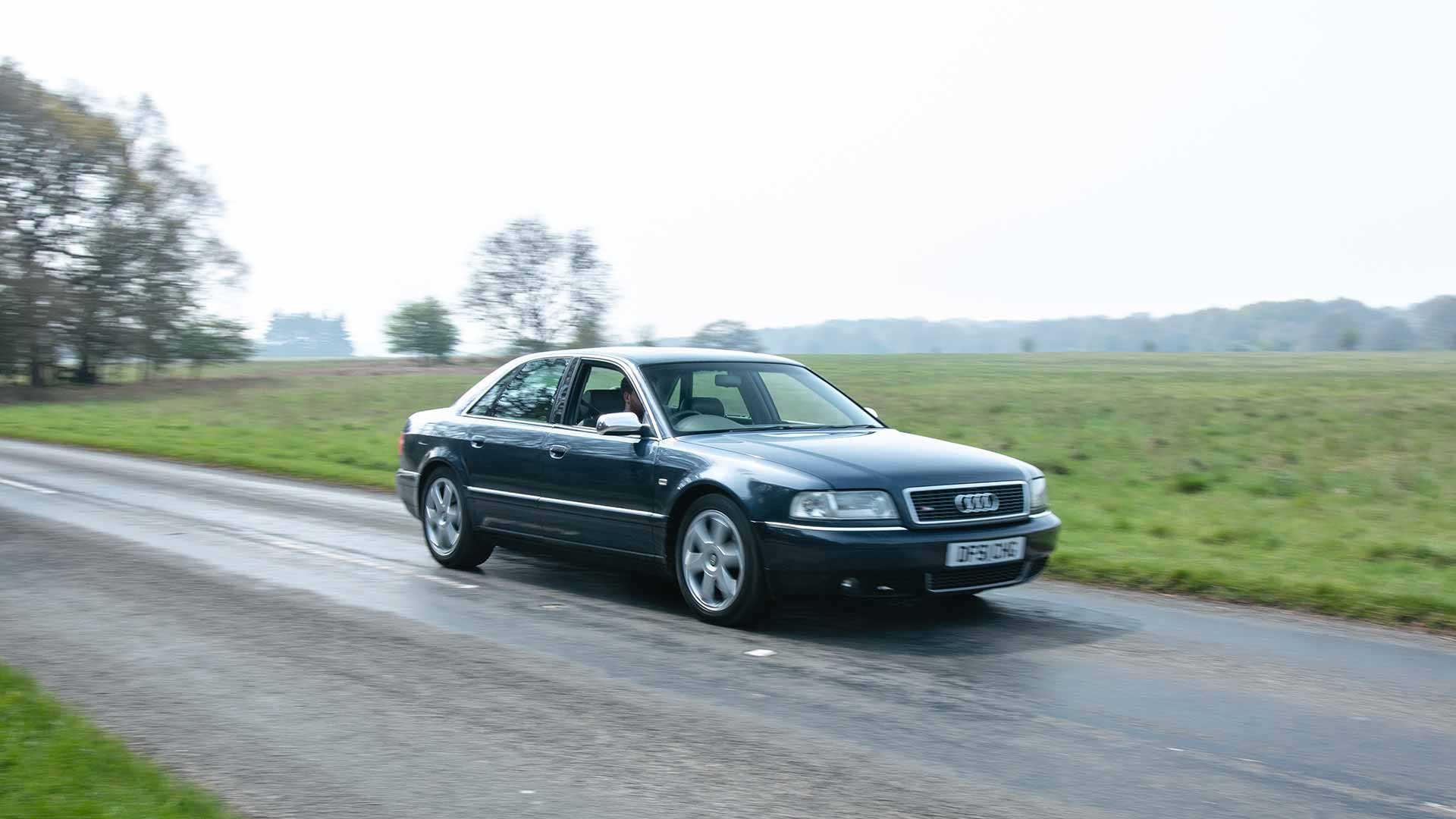 Beemer-beater, the S8 isn’t, though. The Quattro all-wheel drive is faithfully grippy and the chassis feels balanced if not pushed too hard. Its damping is compliant, but there’s just a bit more body roll than you’d want. If the driving gets any more exciting than a swift hustle, the fact that the engine sits almost completely beyond the front wheels becomes obvious. It’s definitely a super saloon rather than a sports saloon.

What the S8 has in spades (and which we sorely miss in modern cars), is a bit of tyre sidewall. It rides beautifully when pressing on, making light work of rutted British roads.

Deutsch marques: S8 was faultless for our week in Norfolk. I gave up using the unfathomable 18-year-old nav by the time we left London, though.

Just booked the GTI in for its MOT, too. pic.twitter.com/NQkN4usk5A

What the S8 is most good at is chewing miles. Sorry, chewing fuel. Sorry, both at once. The beautifully refined cabin, with its double-glazed windows, is the perfect place to forget that you’re doing, at best, 24mpg. If you’re exercising that V8 at all, it’s more like 15mpg.

The S8 on a long run is absolutely delightful, as reported by all at team MR. Tim took a family trip to Norfolk in it, Richard did some commuting and I ran it for miles in-between. Just as soon as you fall in love with the delicious bubble the S8 provides for a long journey, so too do you worry about its voracious appetite. 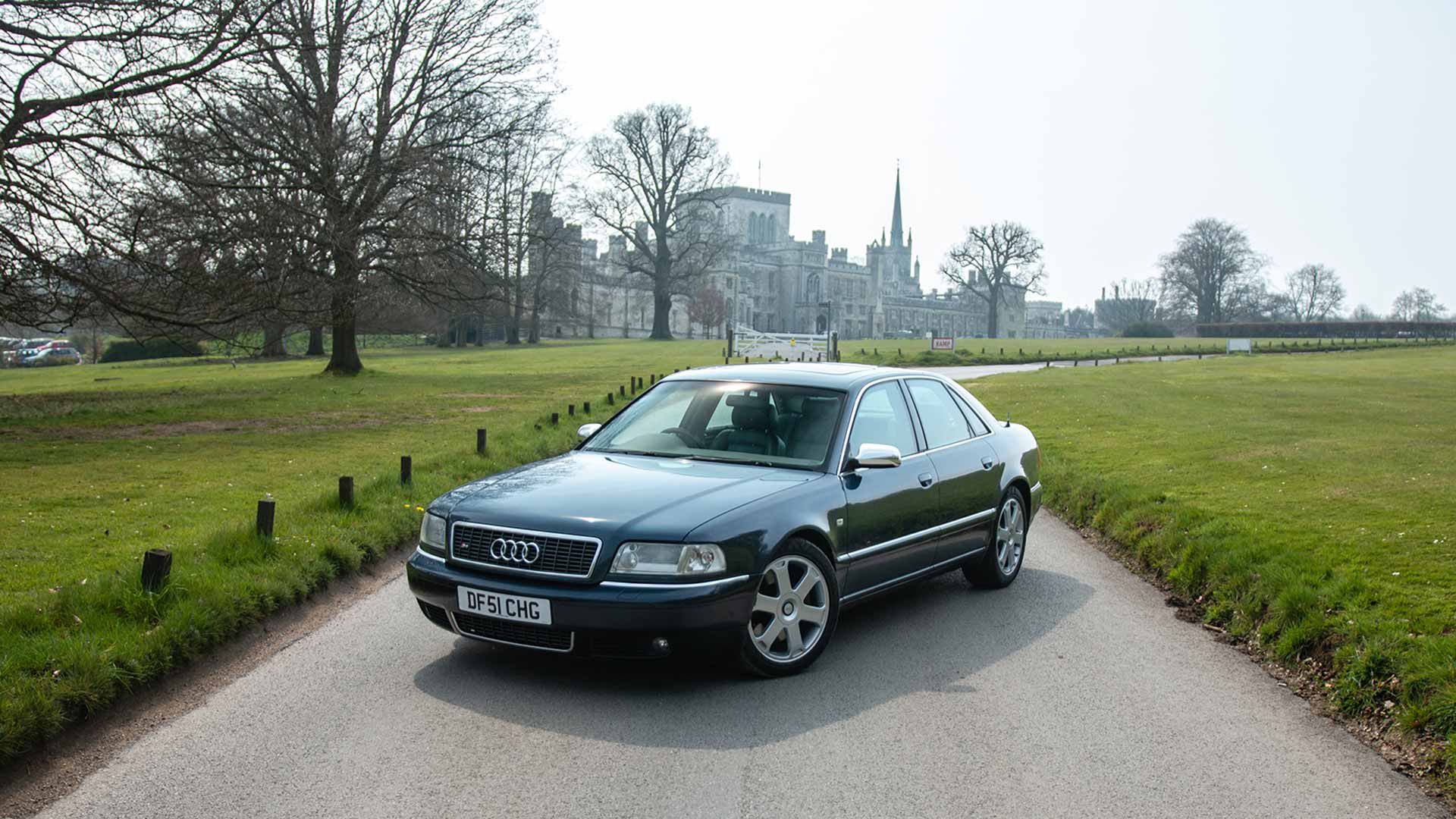 The Audi S8, like the Millenium Dome, is of its time. Both represent the era from which they originate giving itself a hearty pat on the back. And both live on in 2019, with equally strong arguments for and against their suitability. You love it from afar, you enjoy it up close, but sooner or later, the novelty wears off. Almost.

You hand back the keys, quietly nursing your superleggera wallet, then you immediately have second thoughts. You’d take 10mpg if it meant you could go for one last waft. Boy, do we miss it now it’s gone.

The Porsche 911 Turbo is the ultimate 'city' supercar. But it’s also longing to escape – and fast. We drive the 992 Turbo S Cabriolet.
Read more
Previous articleNumber of used electric cars soars 27 percent
Next articleAccidents are 10 times more likely at 30mph than 70mph

It's a Volkswagen, but not as we know it. And it's going to sell by the t-ruckload
Read more

6 ways Audi is fighting back after dieselgate

Audi has some crisis management to deal with following dieselgate. Is this enough to save the reputation of VW Group’s premium brand?
Read more

The price is right: 20 great value 4x4s for sale on the UK's most popular classified ad website
Read more

Ford Focus is first car with seats certified against back pain

Trucks and SUVs ready for the block at Mecum Denver 2019

These classic utility vehicles are set to cause a major stir at the Mecum Auctions event in Denver, Colorado this weekend.
Read more

Official figures are one thing, but which are the cars that put out the least CO2 in the real world?
Read more
Car News

Ant and Dec working on a new BBC car show

The crazy world of Group B rally cars

To mark the 30th anniversary of the end of Group B rallying, we select our favourite cars from the sport’s wildest era
Read more

If you’re looking for your first car and you’re able to buy a new car, you’ve got some cracking models to choose from.
Read more
Advice

From 14 April 2020, the driving theory test will include three multiple-choice questions based on a short video. Here is what the changes mean for you.
Read more