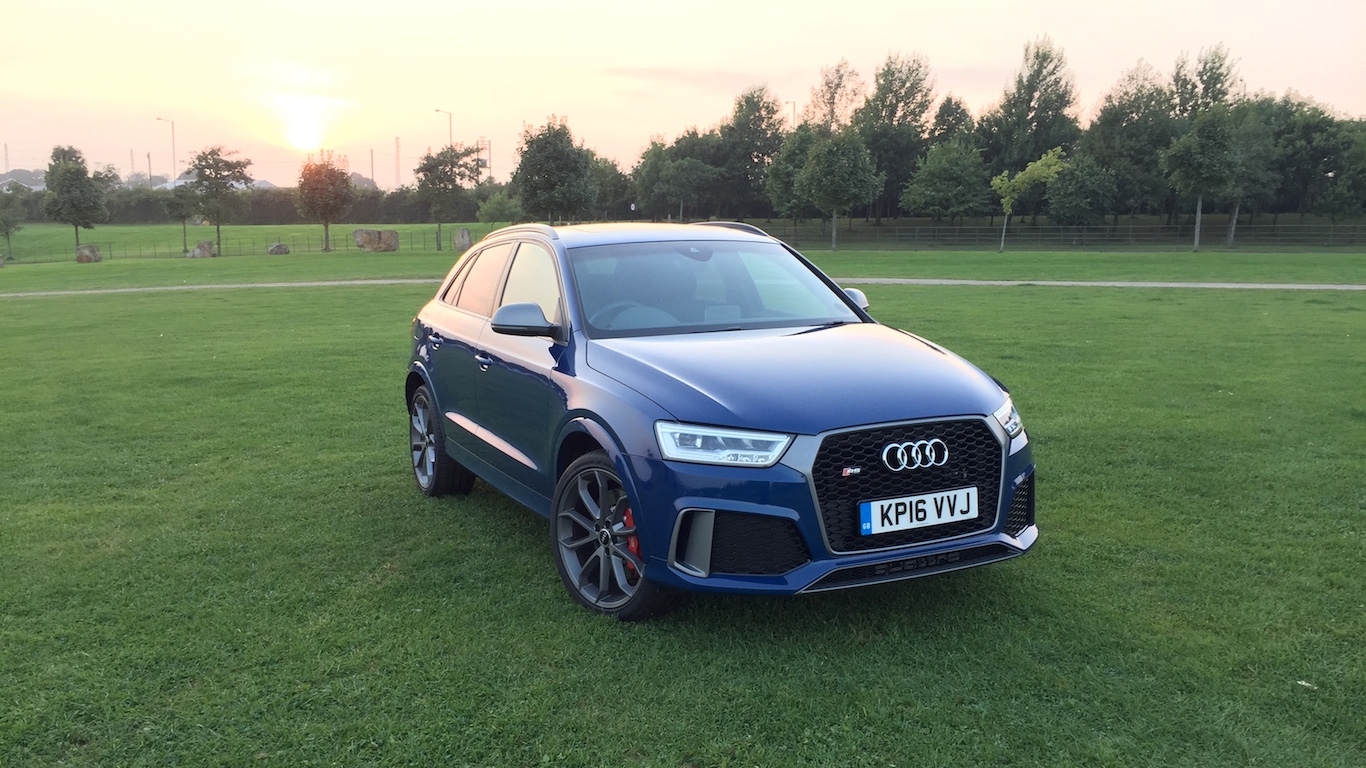 Crossover SUVs are one of the fastest growing sectors in the car market. With the RS Q3 Performance, Audi has combined an evocative drivetrain with a practical bodystyle and prestigious badge. But does it actually make any sense? 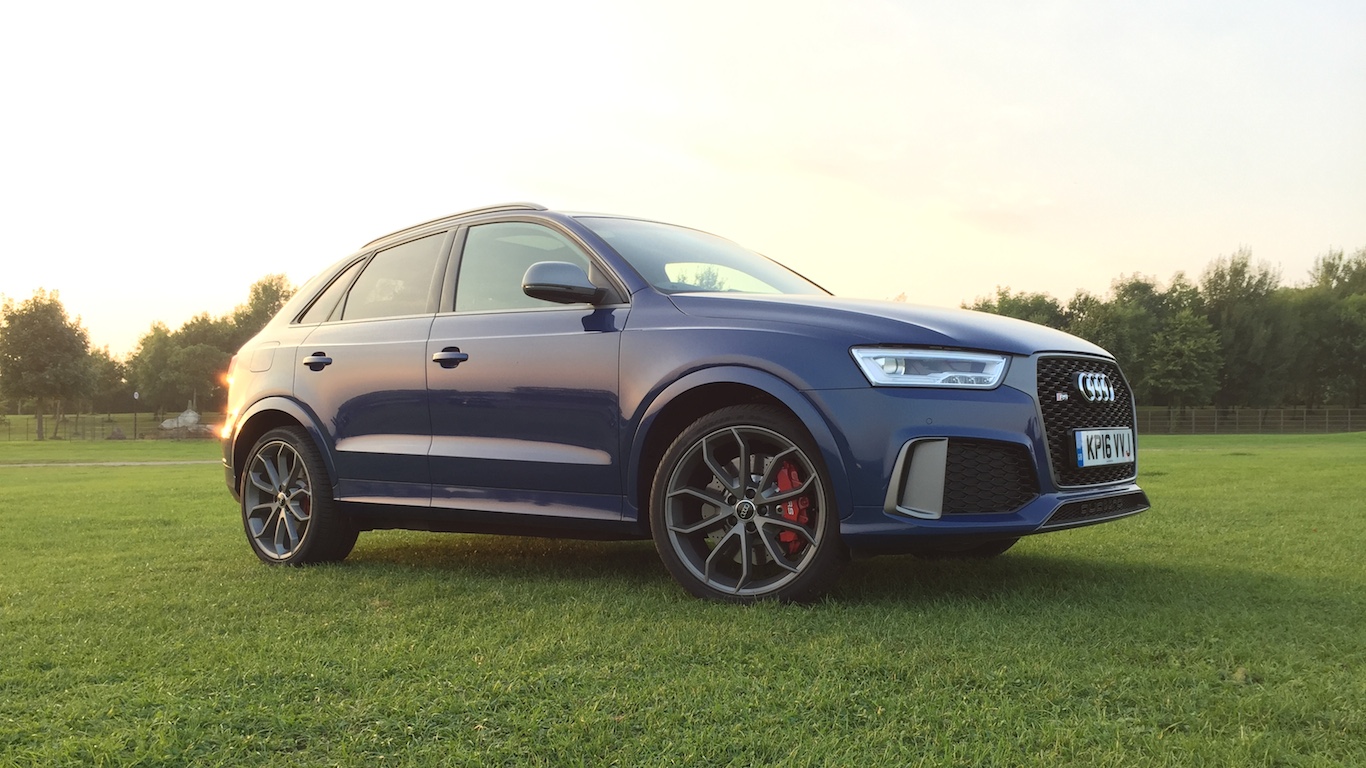 The RS Q3 Performance retails at £47,850, although the example we tested clocked up a price of £53,050 with options. It certainly isn’t cheap for a relatively small car. Audi’s current finance offers include a £1,000 deposit contribution if buying through the Solutions PCP. With a 10% personal deposit, you could have an RS Q3 on your drive for £580 per month over four years. 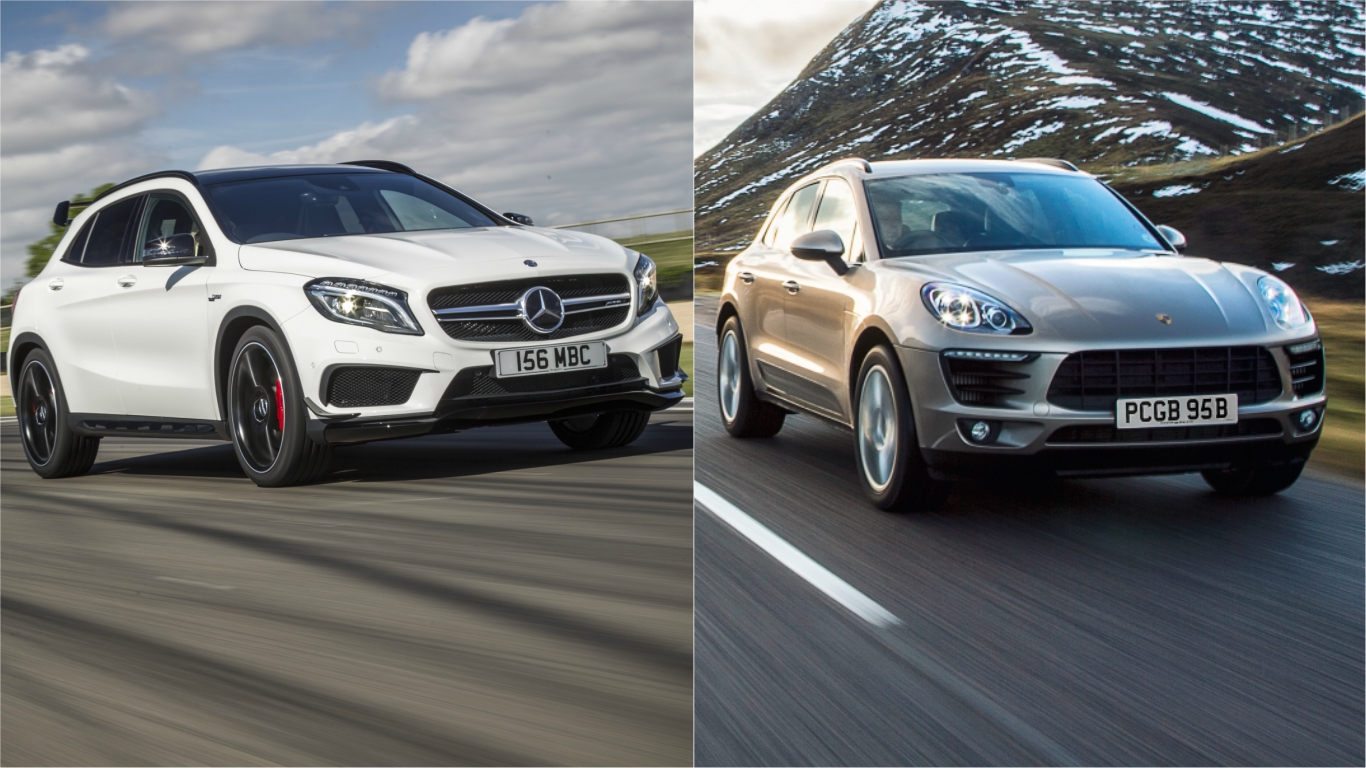 Few and far between, such is the niche status of the high-performance compact SUV. Closest on size, and power, is the Mercedes-AMG GLA 45 4Matic with 381hp from its 2.0-litre four-cylinder turbo engine. The Merc also undercuts the Audi, with a starting price of £44,585. The Porsche Macan S is similarly priced at £45,945, but can only bring 340hp to the fight. 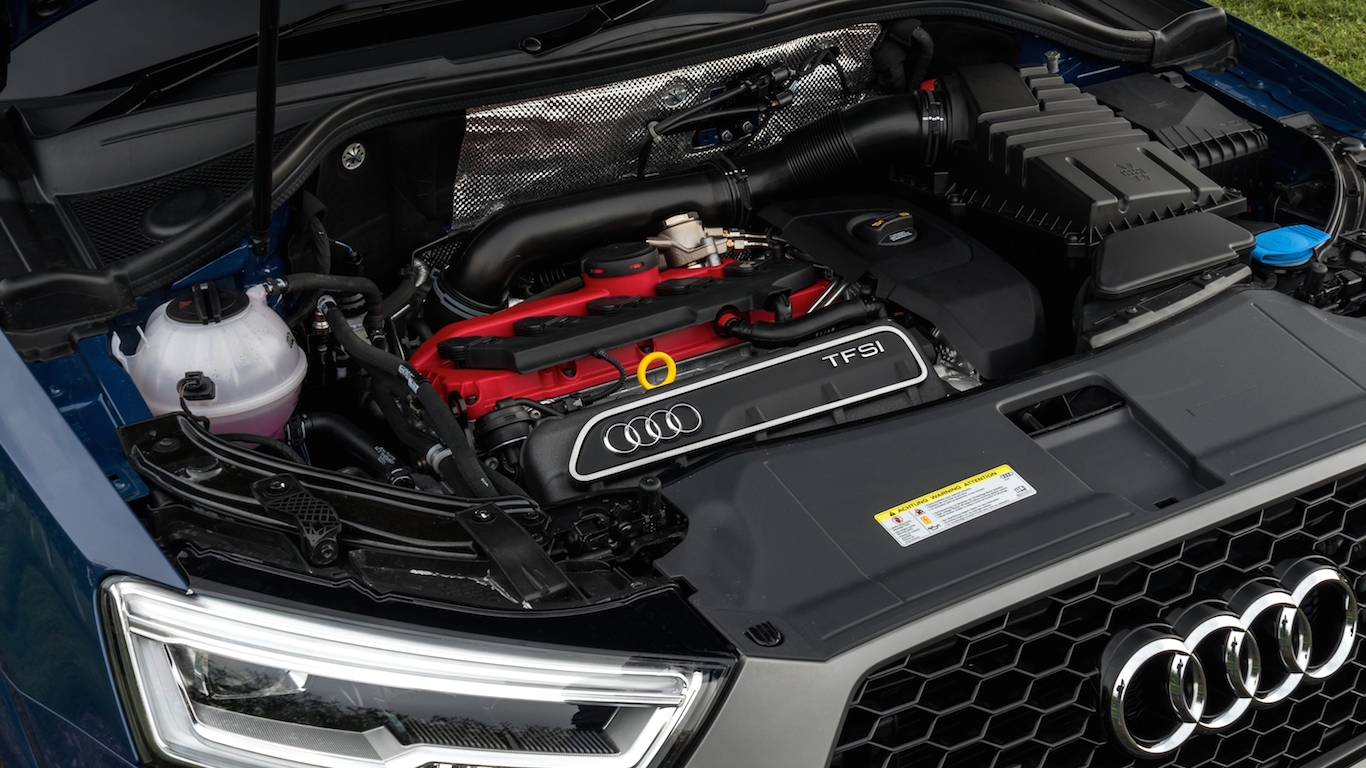 An award-winning one, with a lineage that stretches back some 40 years. It’s a turbocharged 2.5-litre five-cylinder petrol unit that, when almost everything seems to be powered by an inline-four, is a rare and soulful delight. It makes all the noises that you would expect from a five-cylinder engine, allowing you to use terms like ‘off-beat’ and ‘warbling’ freely.

This is a car that will have you take a detour through a tunnel just to hear the noise it makes, especially in Dynamic mode where an additional flap in the exhaust opens up. That exhaust is another unique RS Q3 feature in itself – featuring just one huge tailpipe, instead of the multiple tips of so many contemporary performance cars. 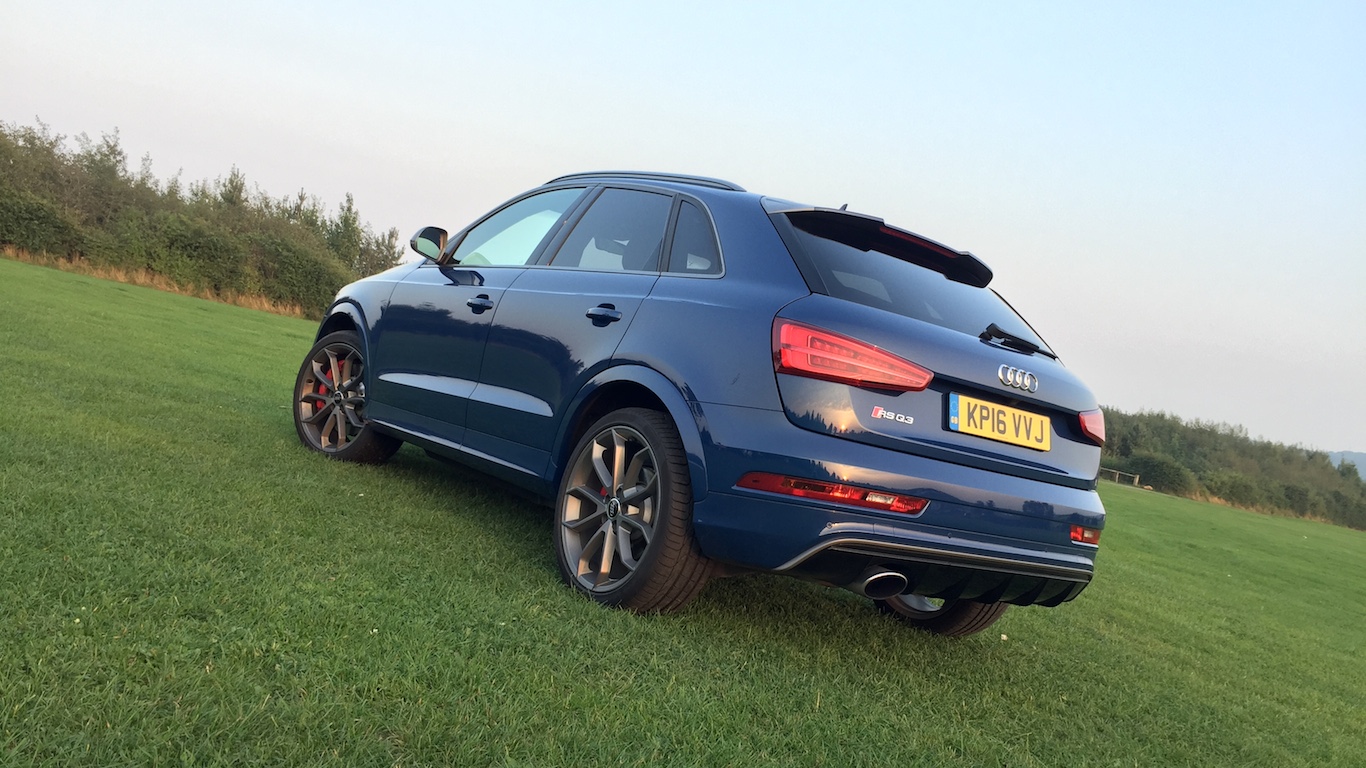 The regular RS Q3 was hardly slow, but the RS Q3 Performance adds – unsurprisingly – more go to proceedings. That five-cylinder engine now makes 362hp (an increase of 27hp over the standard car) whilst torque is also boosted to 343lb ft. Although no featherweight at 1,655kg, such power means the RS Q3 Performance bellows its way from 0-62mph in 4.4 seconds, with a limited top speed of 155mph.

A raised driving position means the sense of speed is even more dramatic, added to by the thumping gearshifts from the seven-speed DSG transmission. The latter is useful for keeping the engine on-boost, meaning the RS Q3 can gain speed at quite an alarming rate, such is its mid-range pace. 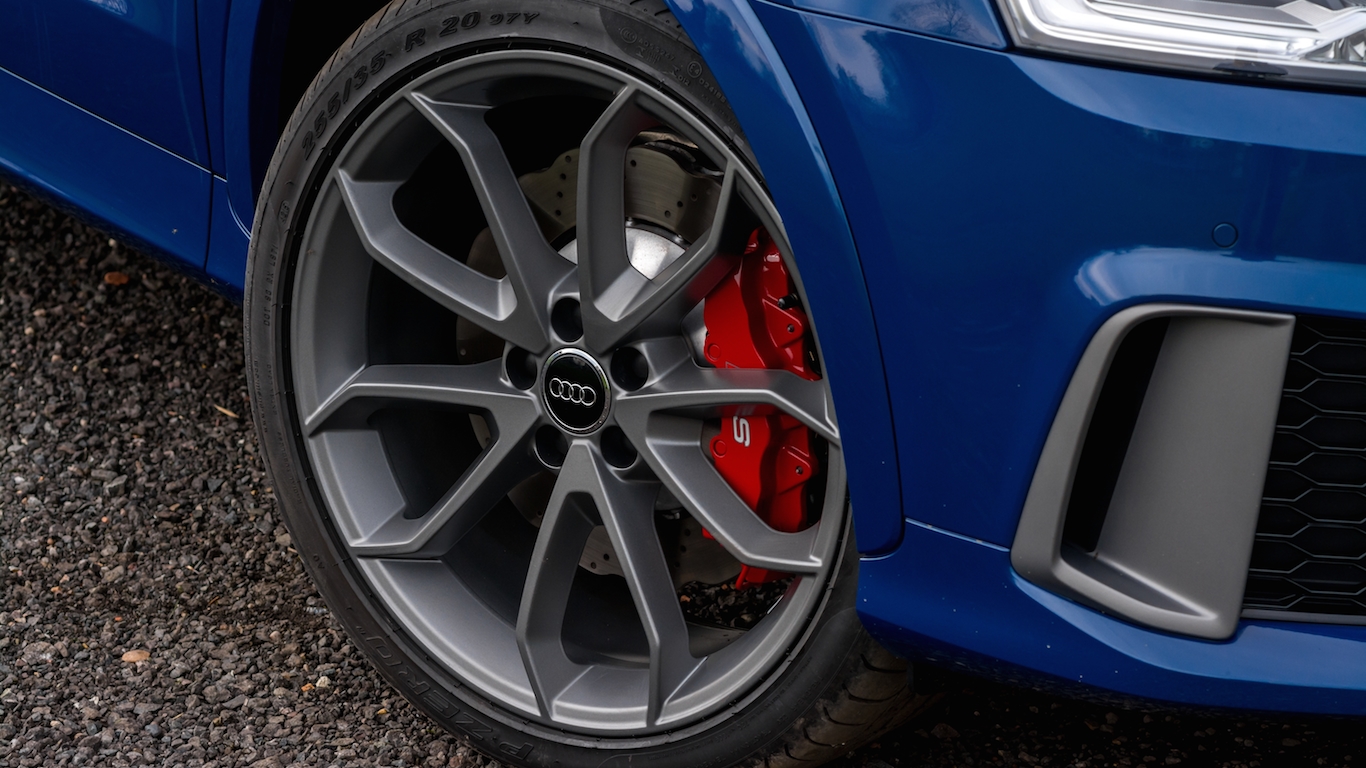 Despite riding on huge 20-inch wheels with 255/35 low-profile tyres, the RS Q3 is actually more comfortable than you might imagine. Yes, the worst stretches of tarmac will end up being transmitted back to the cabin, but not as severely as in a comparable hot hatch. The sports seats feature multiple adjustment options, including under-thigh support and electrically-adjusted lumbar support. 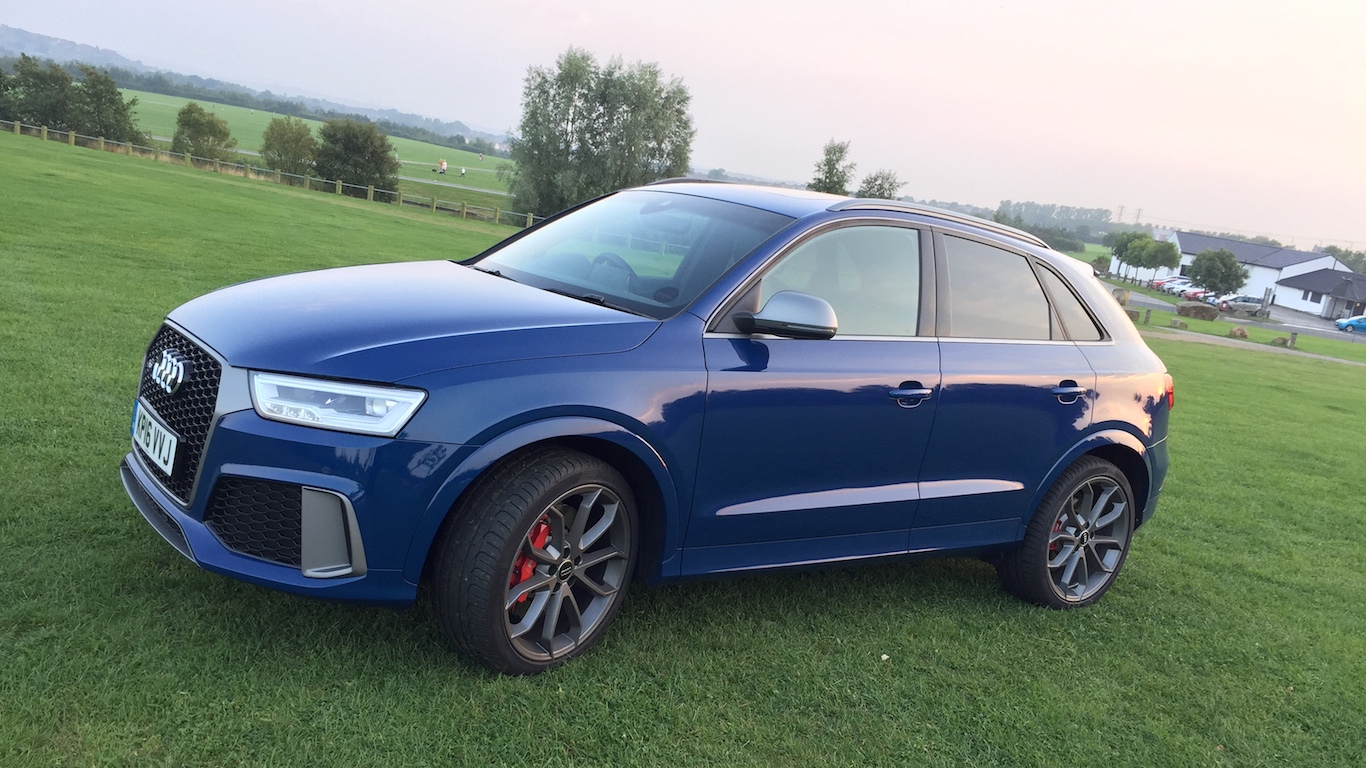 Absolutely, but not necessarily in a conventional performance car manner. The extra height and higher centre of gravity of the RS Q3 Performance encourage a ‘slow-in, fast-out’ cornering style, allowing you to maximise the acceleration on exit. Huge eight-caliper front brakes, grabbing weight-saving wavy discs, mean stopping ability is suitably heroic. Traction from the Quattro drivetrain is steadfast, and there’s even a launch control function.

The RS Q3’s steering is weighty, particularly in Dynamic mode, but doesn’t offer a great deal of feel or feedback. Again this pushes you to enjoy the buttock-clenching straight-line performance, but back off when things become twistier.  The RS Q3 Performance will undoubtedly put a smile on your face, even if just because of the exhaust note. 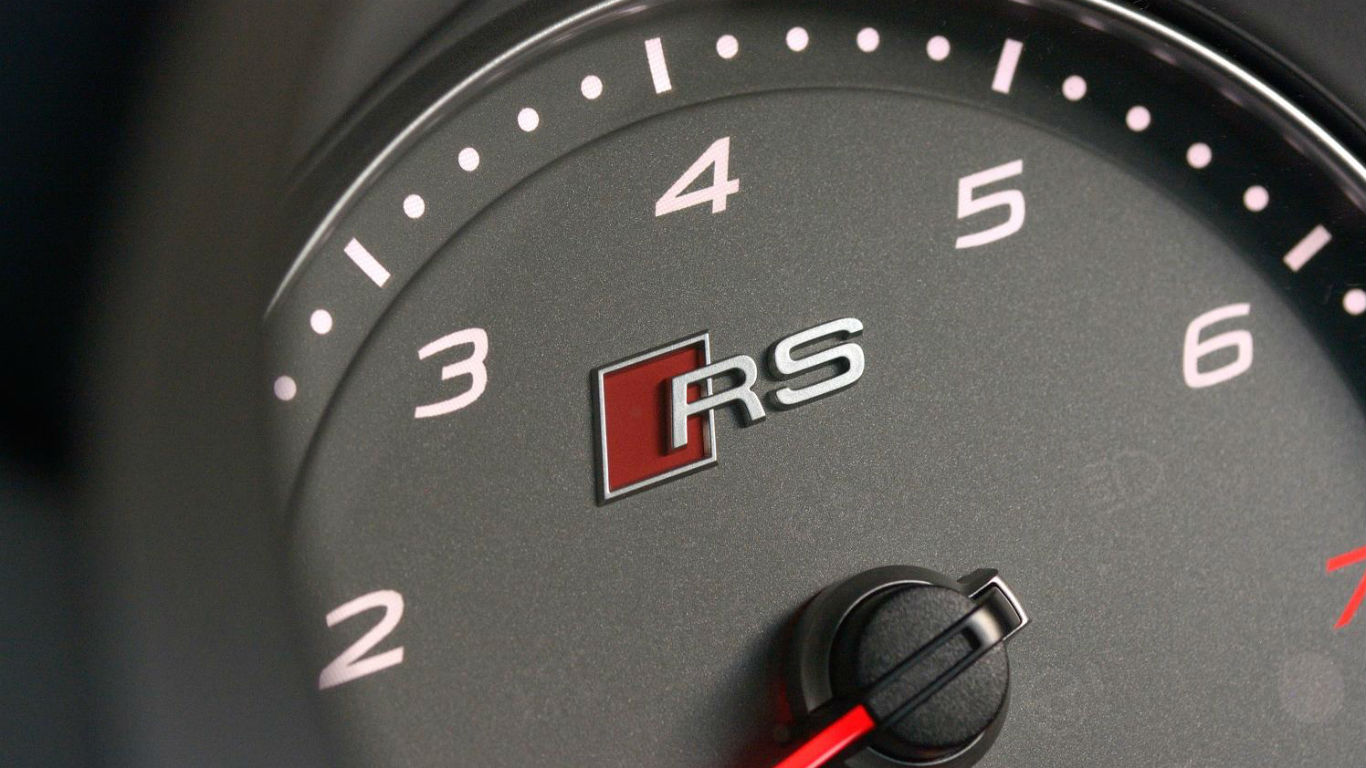 Here comes the penalty for enjoying a five-cylinder turbocharged engine too much. Officially, the RS Q3 Performance records a combined fuel economy figure of 32.8mpg, with CO2 emissions of 203g/km. In reality, we experienced average fuel consumption of around 21-25mpg with longer motorway journeys nudging the average closer to 28mpg. A standard start-stop system tries to help, but there will ultimately be a price to pay for exploiting the performance on offer. 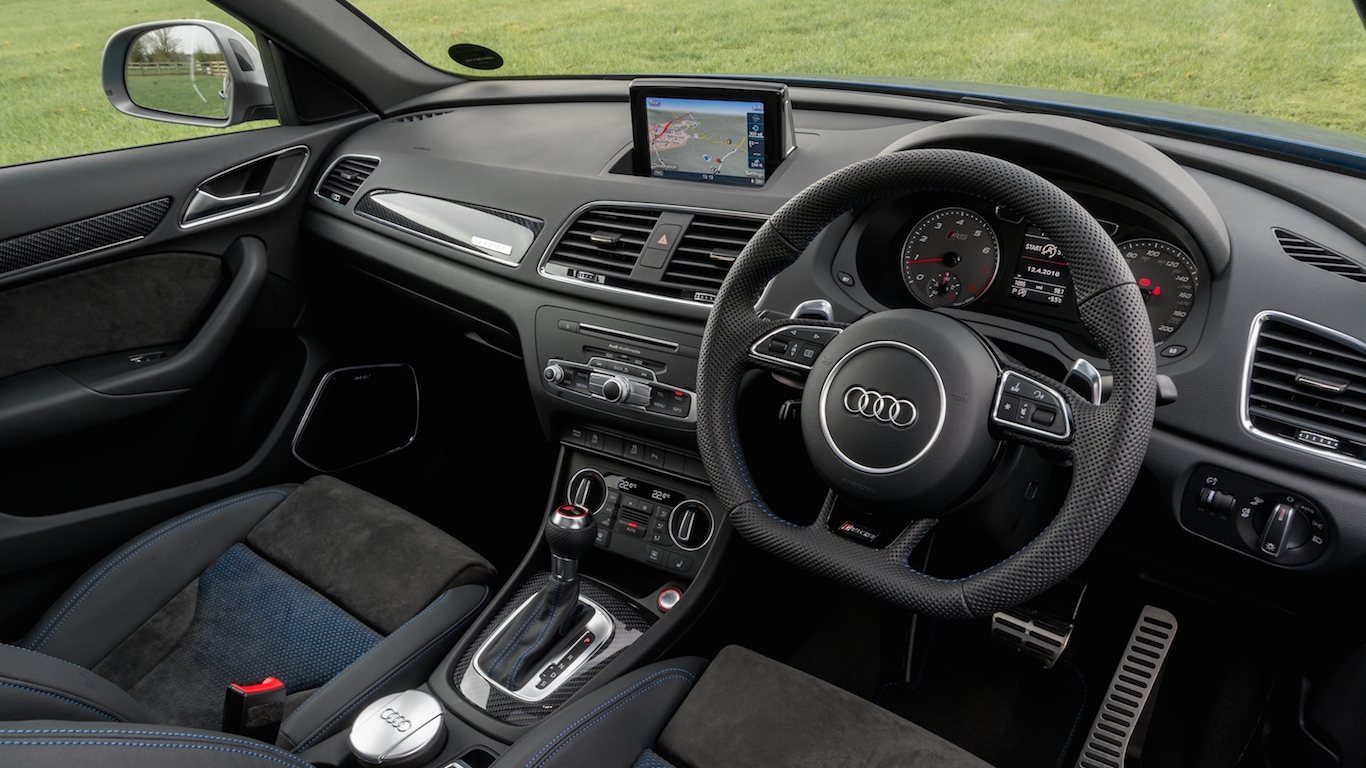 Standard Audi fare, although that is not a bad thing. The base Q3 is one of Audi’s older models, meaning the current RS Q3 Performance lacks the latest design tweaks of the new A3 or A4. However, you do gain a set of supportive Alcantara and leather sports seats, unique carbon fibre trim with a special blue weave, and a perforated leather steering wheel. It all looks, and feels, suitably expensive, while the (£1,125 optional) panoramic sunroof helps prevent the interior appearing too cave-like. 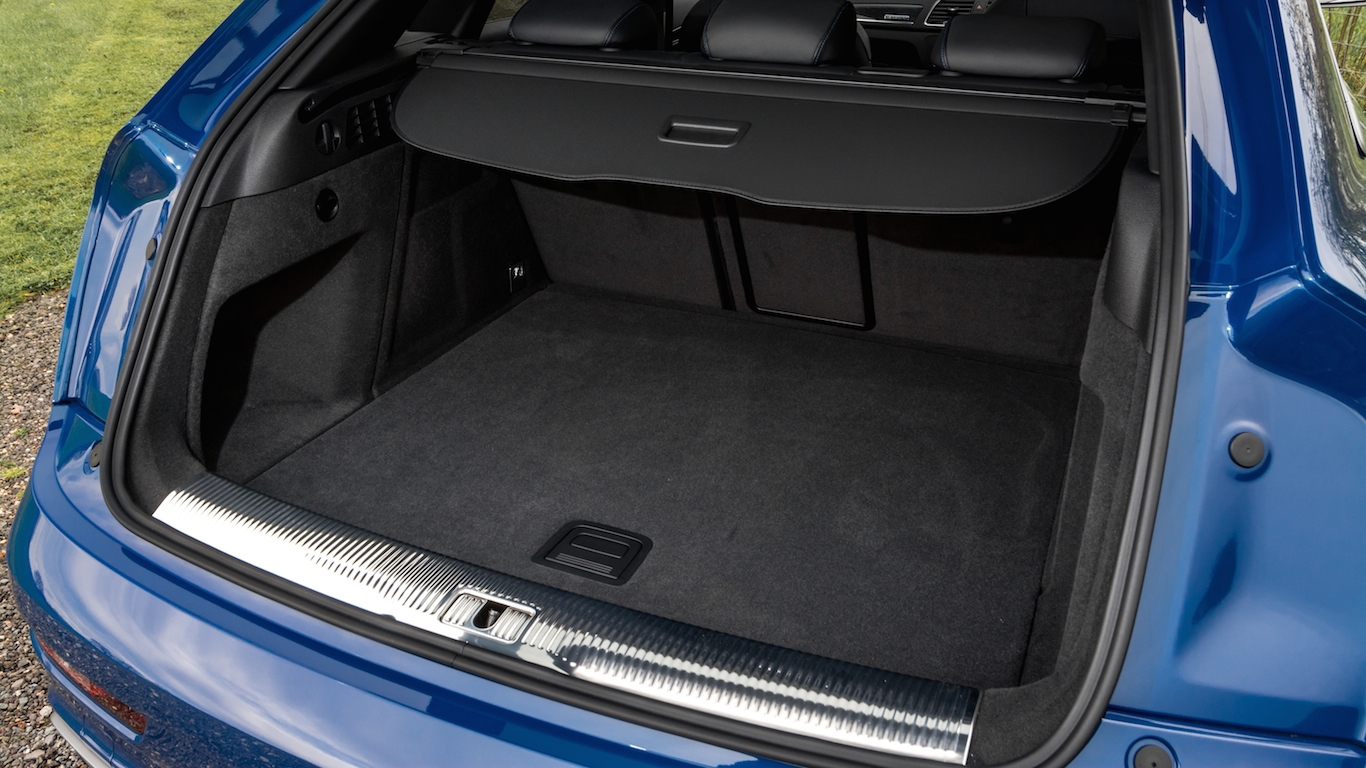 Beneath the fancy bodykit and badging, this is still fundamentally a compact SUV, meaning the RS Q3 Performance can do all the regular lifestyle things. With the seats up, the boot holds 356 litres – compromised by a shallow load space – but that increases to 1,291 litres with the seats folded flat. Rear space is suitable for kids, or adults on shorter trips, meaning you can bring the whole family along to experience how fast it is. 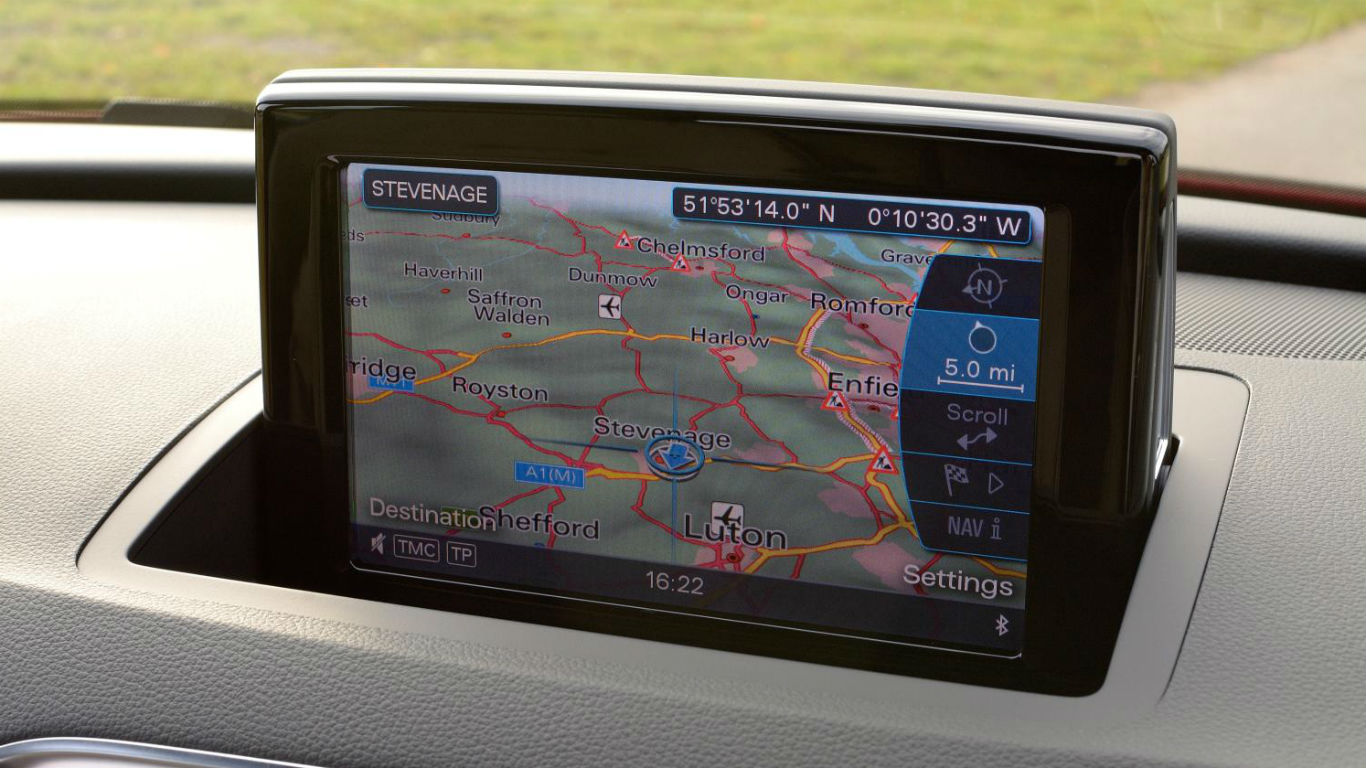 The RS Q3 misses out on Audi’s brilliant Virtual Cockpit, but does still boast enough technology to offset the list price. Inside is a 6.5-inch retractable MMI screen, with a second 3.5-inch colour display mounted between the instrument dials. Satellite navigation, DAB radio, Bluetooth connectivity and an Apple music interface are all standard.

Our test car also featured a brilliant Bose sound system. At £690, it is an option worth picking, even if just for the LED lighting that makes the front speakers appear to float at night. LEDs also feature in the headlights, taillights and dynamic indicators, while cruise control, parking sensors and keyless entry are all included. 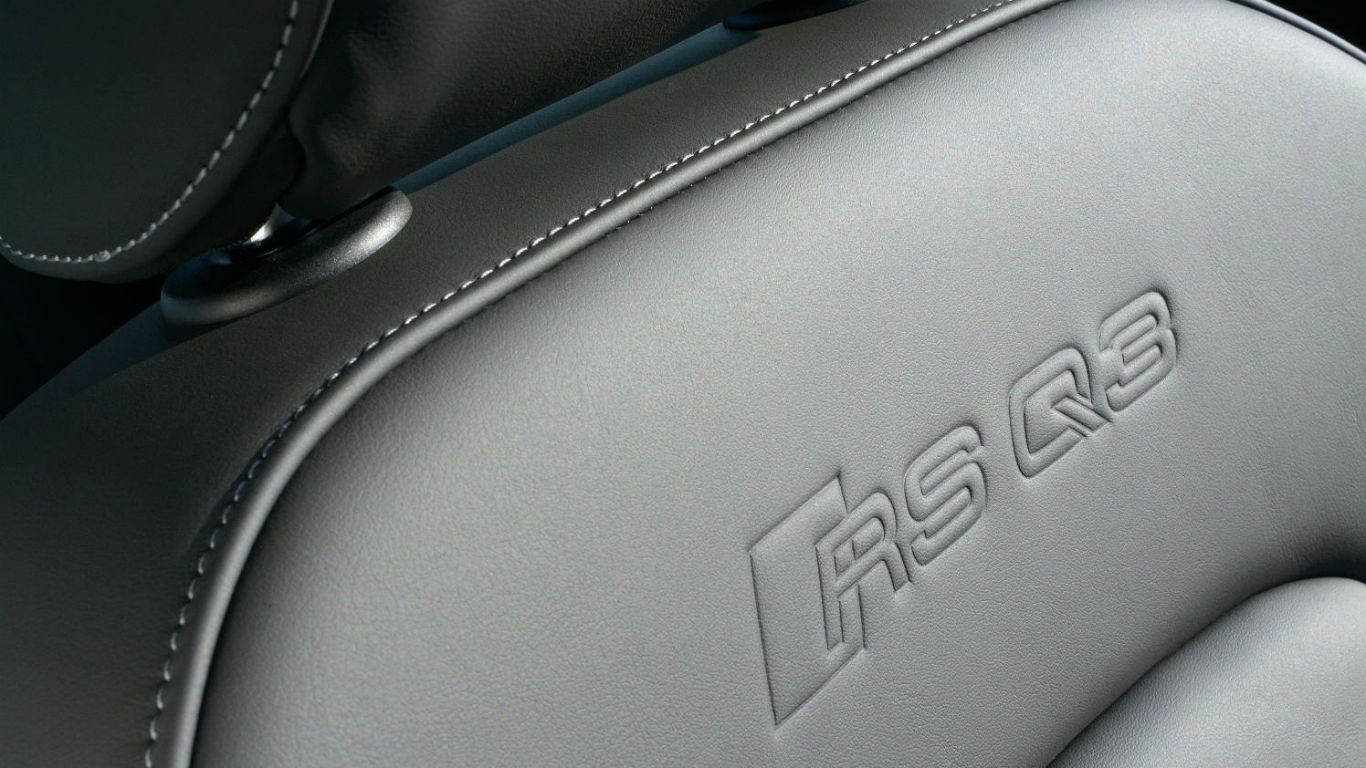 At launch in 2011, the standard Audi Q3 gained a full five-stars from Euro NCAP testing, and this RS Q3 Performance version should be no different. An electronic differential lock is standard, helping the RS Q3 put all that power down effectively, while the electronic stability control also offers a sport mode. As noted, braking power is appropriately immense, and the Quattro 4WD drivetrain keeps things under control. 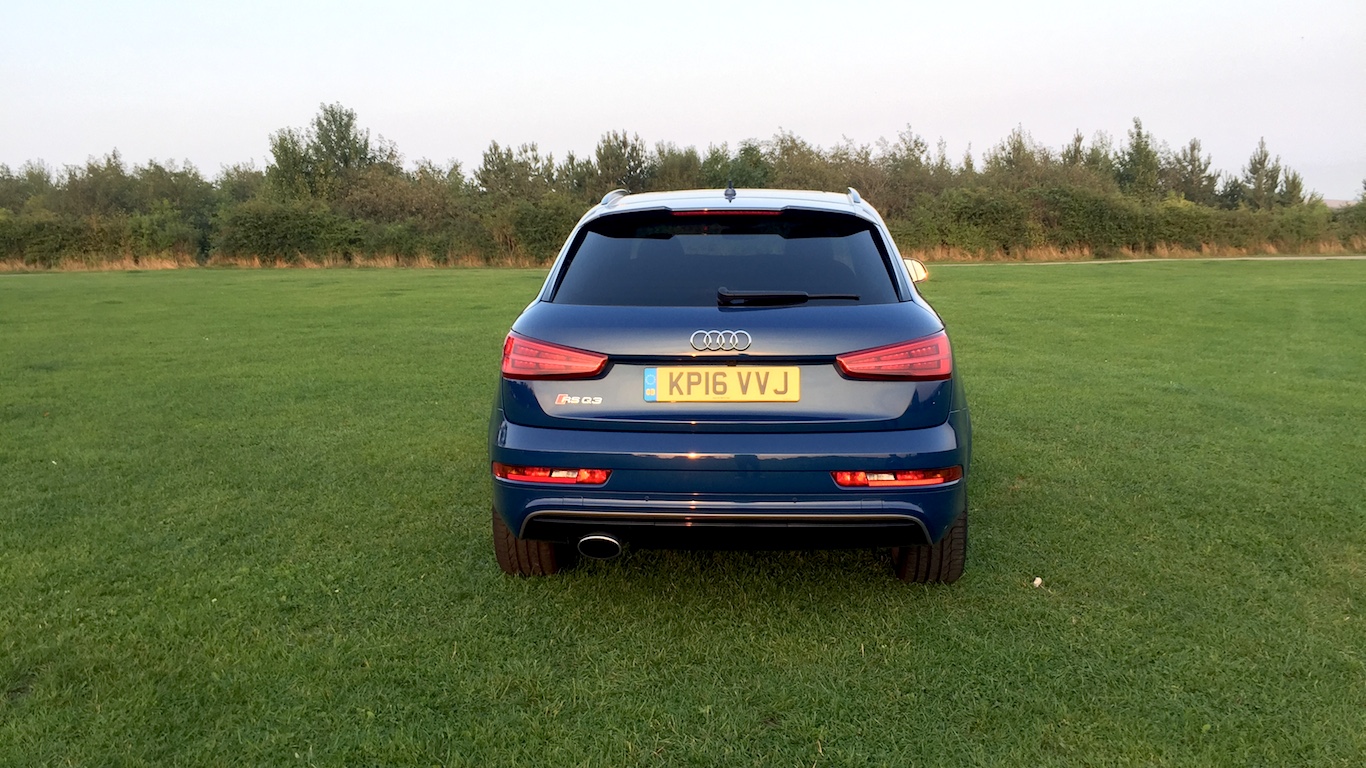 This RS Q3 Performance is over £3,000 more expensive that the regular RS Q3 model. However, extra power aside, the Performance model does gain a number of extras, such as the distinctive Ascari Blue paintwork option, along with matte titanium finish seen on the wheels and bodywork trim. If you’re going to spend big on a fast SUV, you may as well go all-in and get the Performance version. 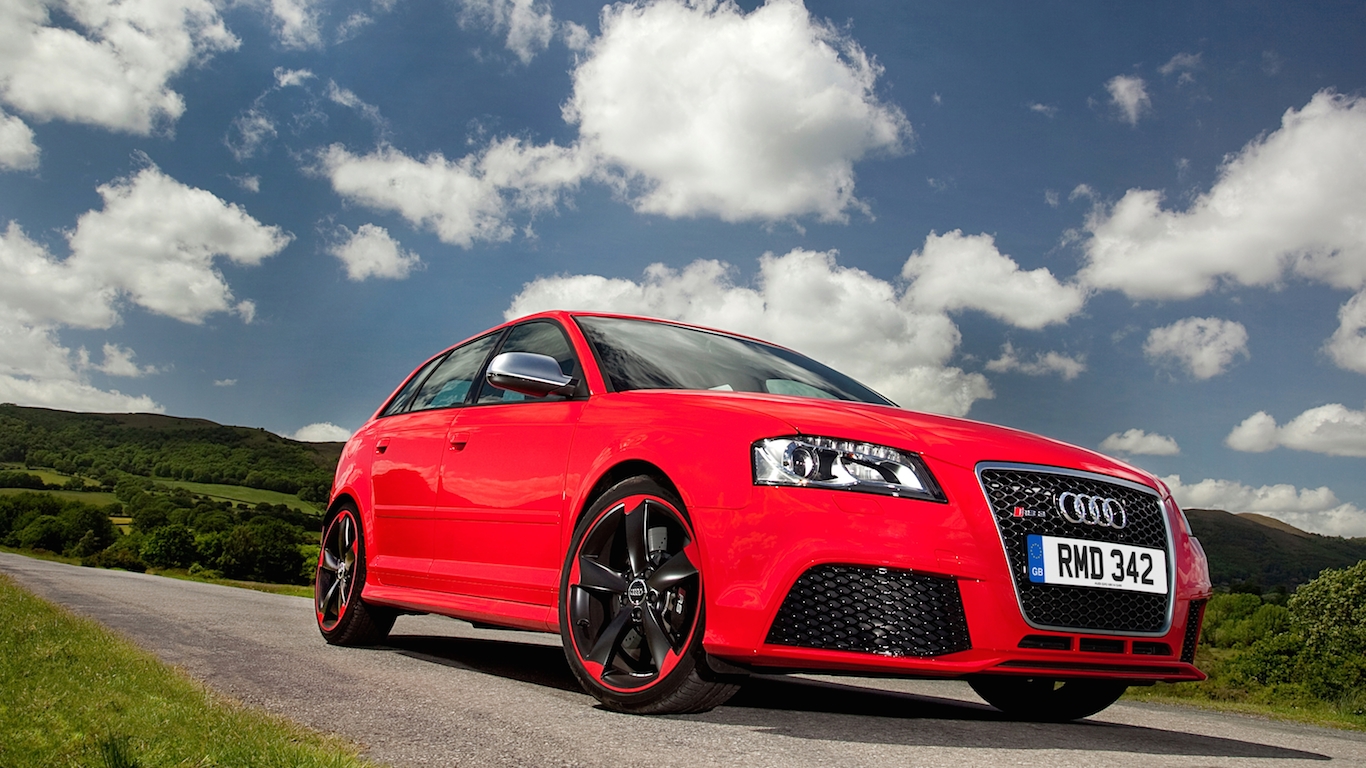 Used RS Q3 models are relatively rare, with the earliest 2014 examples on the used market from around £28,000. It’s worth noting these are down on power compared to the latest cars, making only 306hp. If you can live without the need for a raised ride height, the previous generation Audi RS3 Sportback will deliver five-cylinder fun from £20,000. 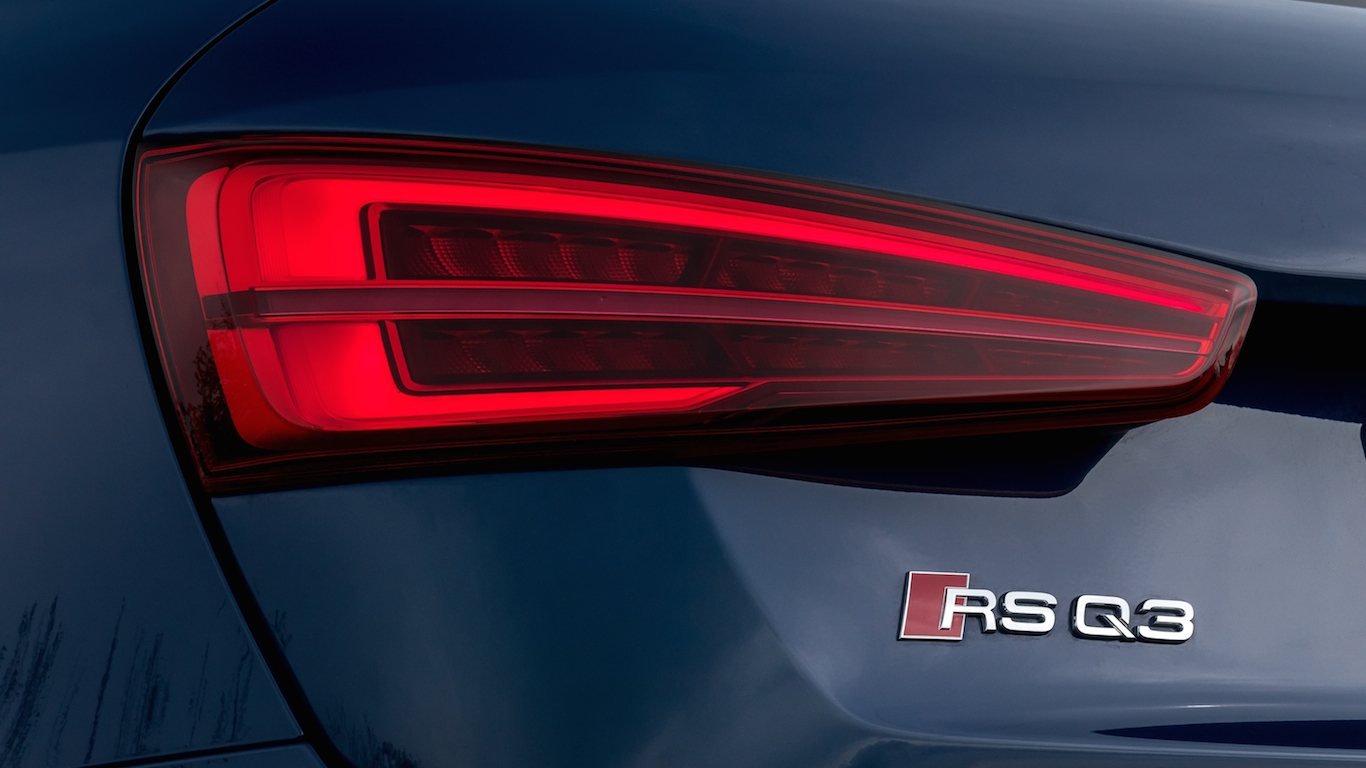 Objectively, the RS Q3 Performance is a very expensive answer to a question few people have ever thought to ask. Nobody needs a £50k compact SUV that will do 0-62mph in less than 4.5 seconds, and with wallet-draining average fuel consumption. Yet the sheer ludicrousness of pace from the RS Q3 Performance, along with that characterful five-cylinder engine, make it hard not to like.

It really isn’t cheap, but this is a genuine Audi RS car, and therefore one that will have appeal to a niche group of buyers. Plus, in our anodyne homogenised world, it is heartening to know car manufacturers can still be a little silly at times. 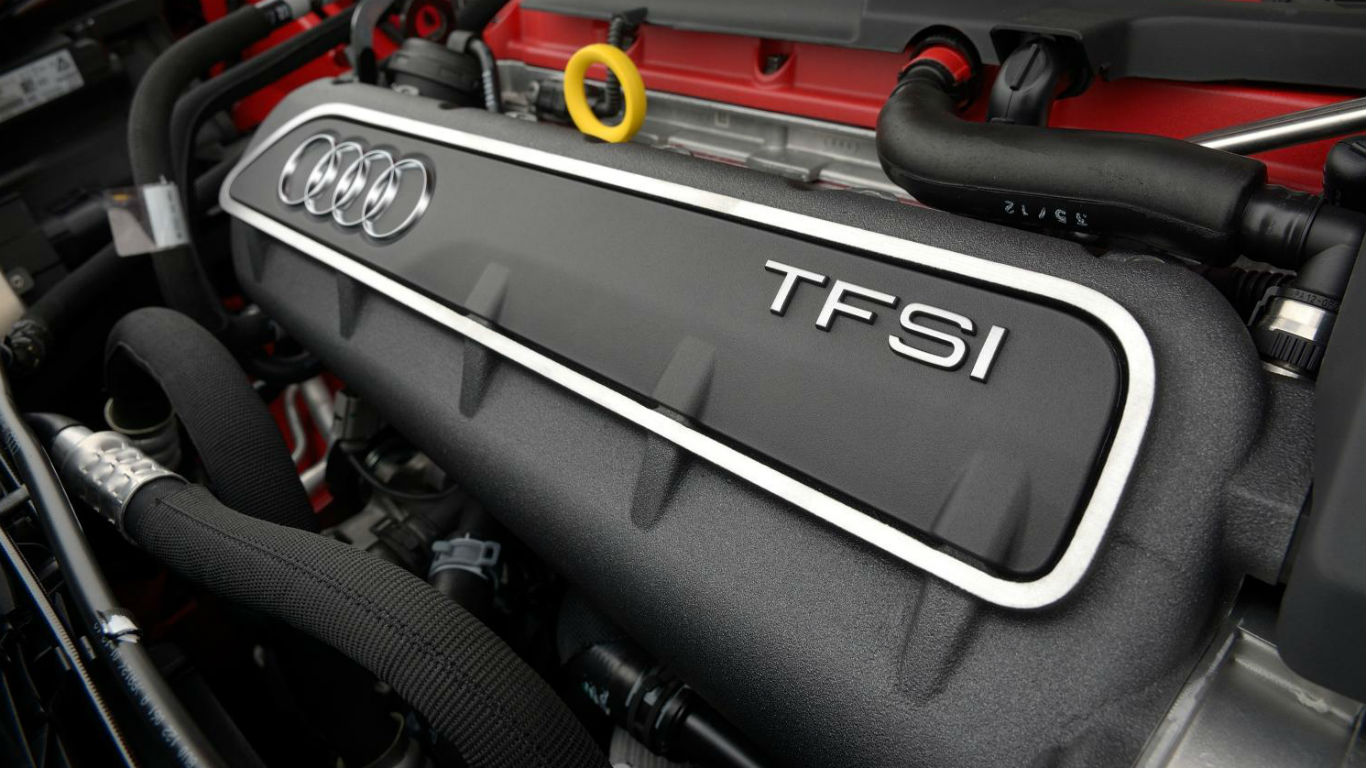 The engine in the RS Q3 Performance is a genuine multiple award-winner. The TFSI five-cylinder unit has won International Engine of the Year seven times in the 2.0 to 2.5-litre category. That’s more than the three times the Mercedes-AMG 2.0-litre engine in the rival GLA45 has managed.